There’s an odd birding culture in southern Arizona. Homeowners set up huge feeder stations to attract a wide variety of birds, then invite the public into their yards to see the birds—for a price. The set-ups I saw were impressive and worth the price of admission, but to visit very many of them could get expensive.

I was told that this guys house—in the desert below the Chiricahua Mountains—is the only reliable place to see a Crissal Thrasher in the Portal area. It’s usually a secretive bird, but it comes to the feeders here. A 50-yard trail leads to a clearing in the mesquite tangle. A garage-size area Is fenced off with chicken wire and there are feeders and fruit all over the place. Twenty feet outside the fence there’s a picnic table and chairs in the shade of a sycamore. The lady who’s hosting (the owner is out of town) said the Crissal comes regularly and she was surprised it hadn’t been seen yet that day.  Three other birders were there for the first half hour and then the hostess was there for the last half hour but I was alone the rest of the time. I determined to stick it out till I saw the bird. It took over two hours. The thrasher finally came in from the scrub. It foraged under a feeder for a bit, spent a short time on a platform feeder, drank at the bird bath, and then somehow clung to a hanging feeder meant for much smaller birds and ate seed. 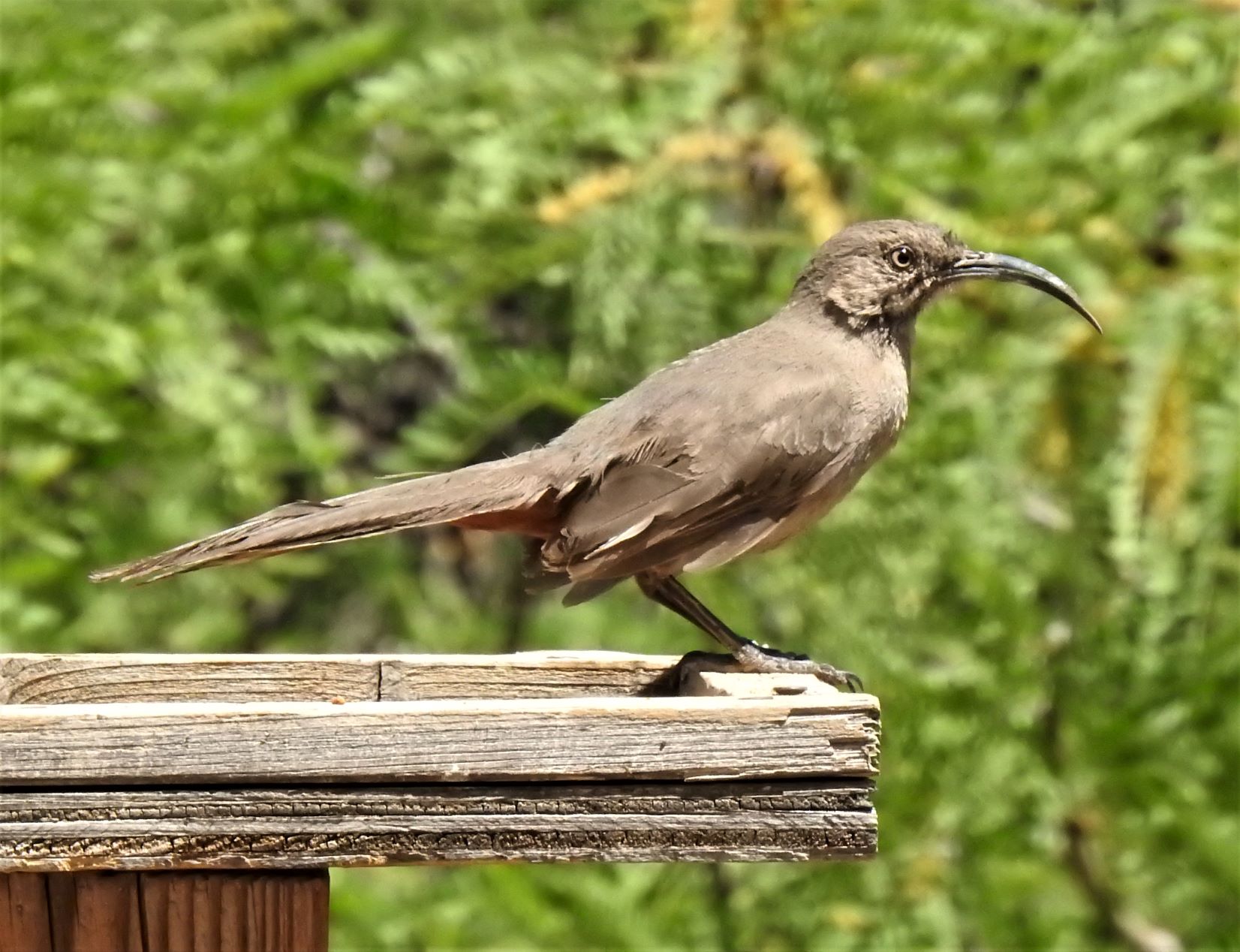 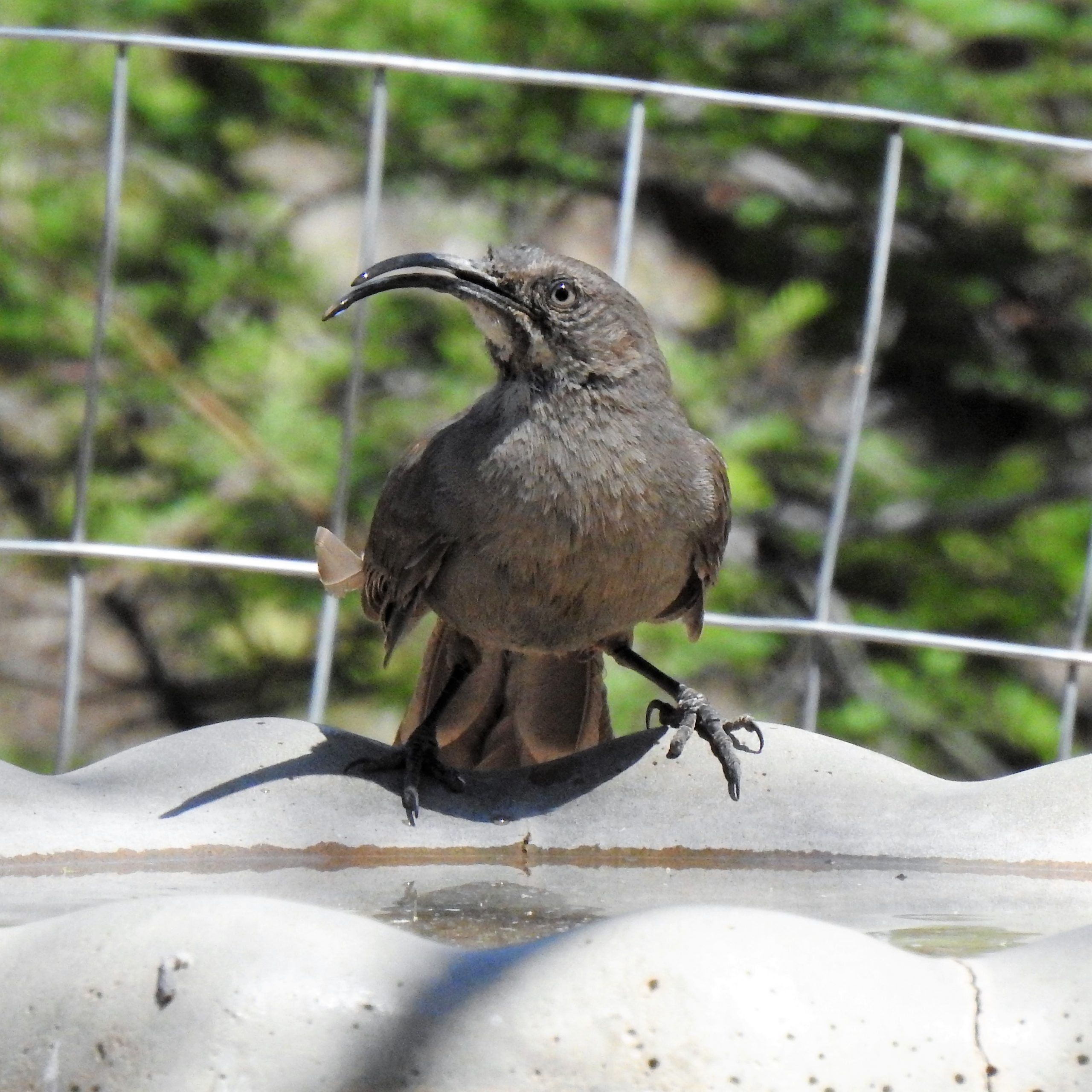 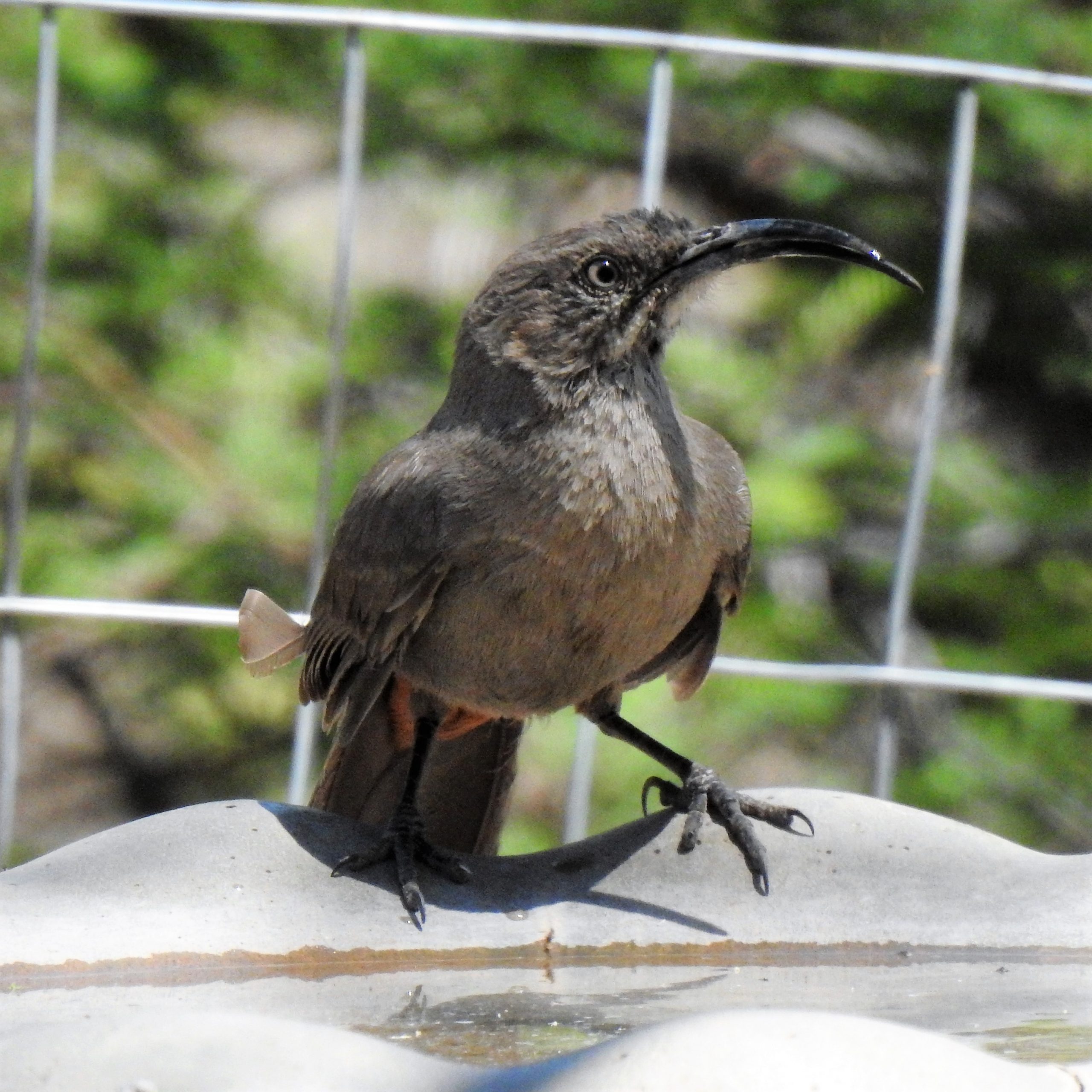 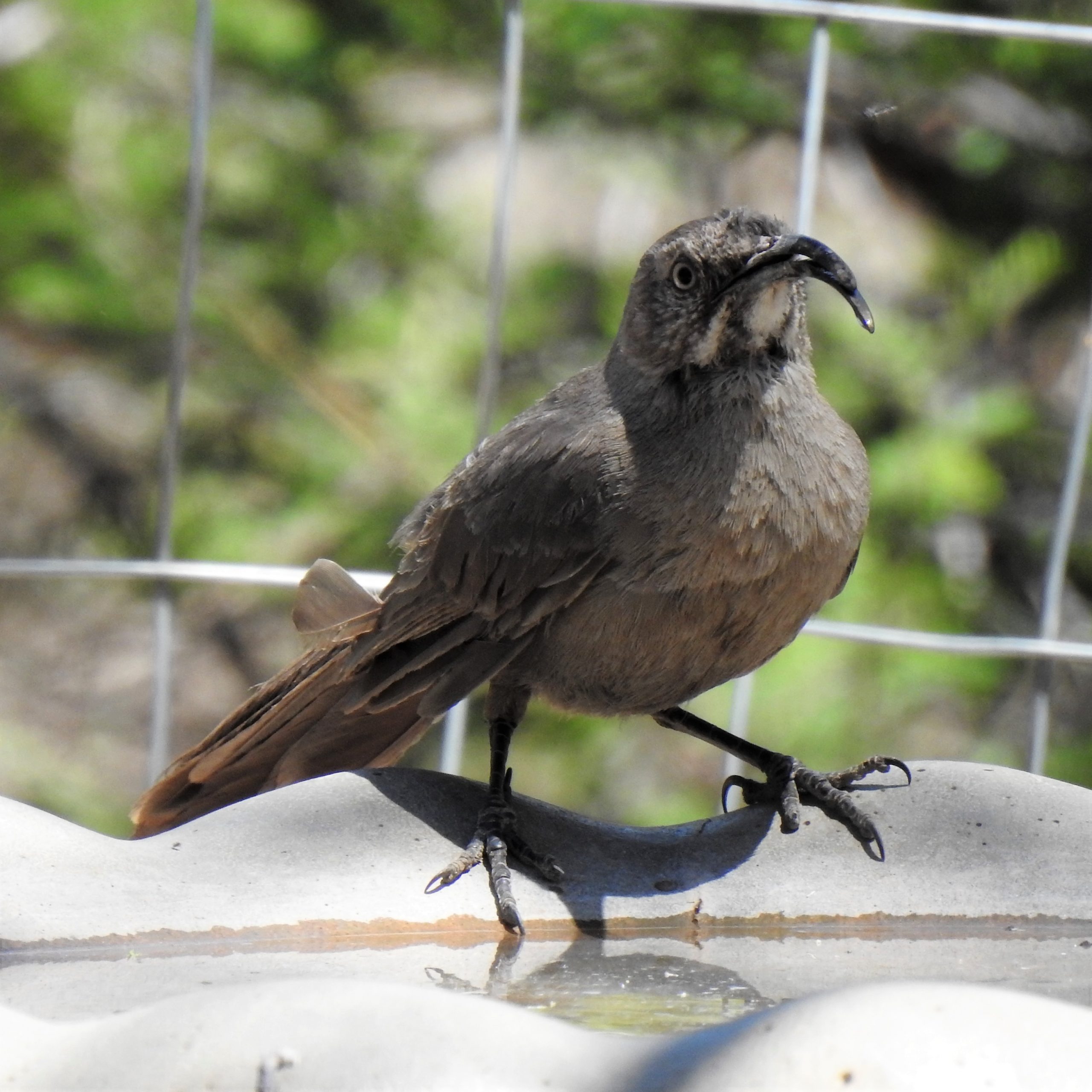 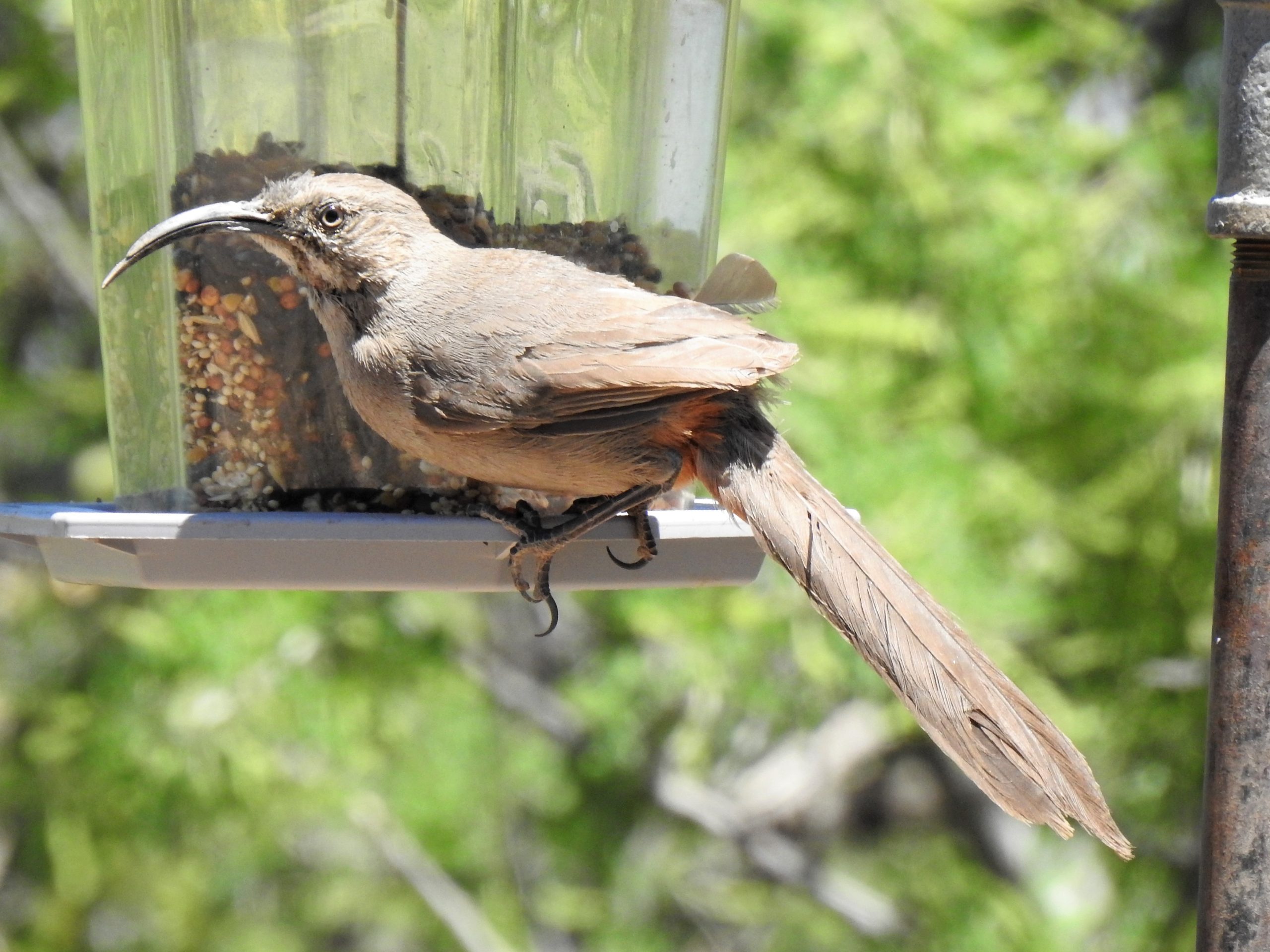 The bird isn’t as crisp and clean as it looks in the field guides. I could see the black line on the pale chin and the rusty undertail coverts (most clearly see at the end of the video clip), but overall it was a dingy gray. The most noticeable thing about it was the comically long bill, much longer than that of a Curve-billed Thrasher.

The hostess said it very rarely posed for photos as nicely as it did for me. I watched for about 10 minutes until it flew off into the scrub and then left for other adventures. The video shows a few seconds of the bird and then a longer time-lapse of the feeder set-up in the yard.