This was a great day of birding. I began at Mueller State Park and hiked my usual four-mile trail loop. There was another car at the trail head when I finished hiking, and I saw a couple people out and about on my drive out of the park, but I didn’t see another soul the entire time I was hiking. 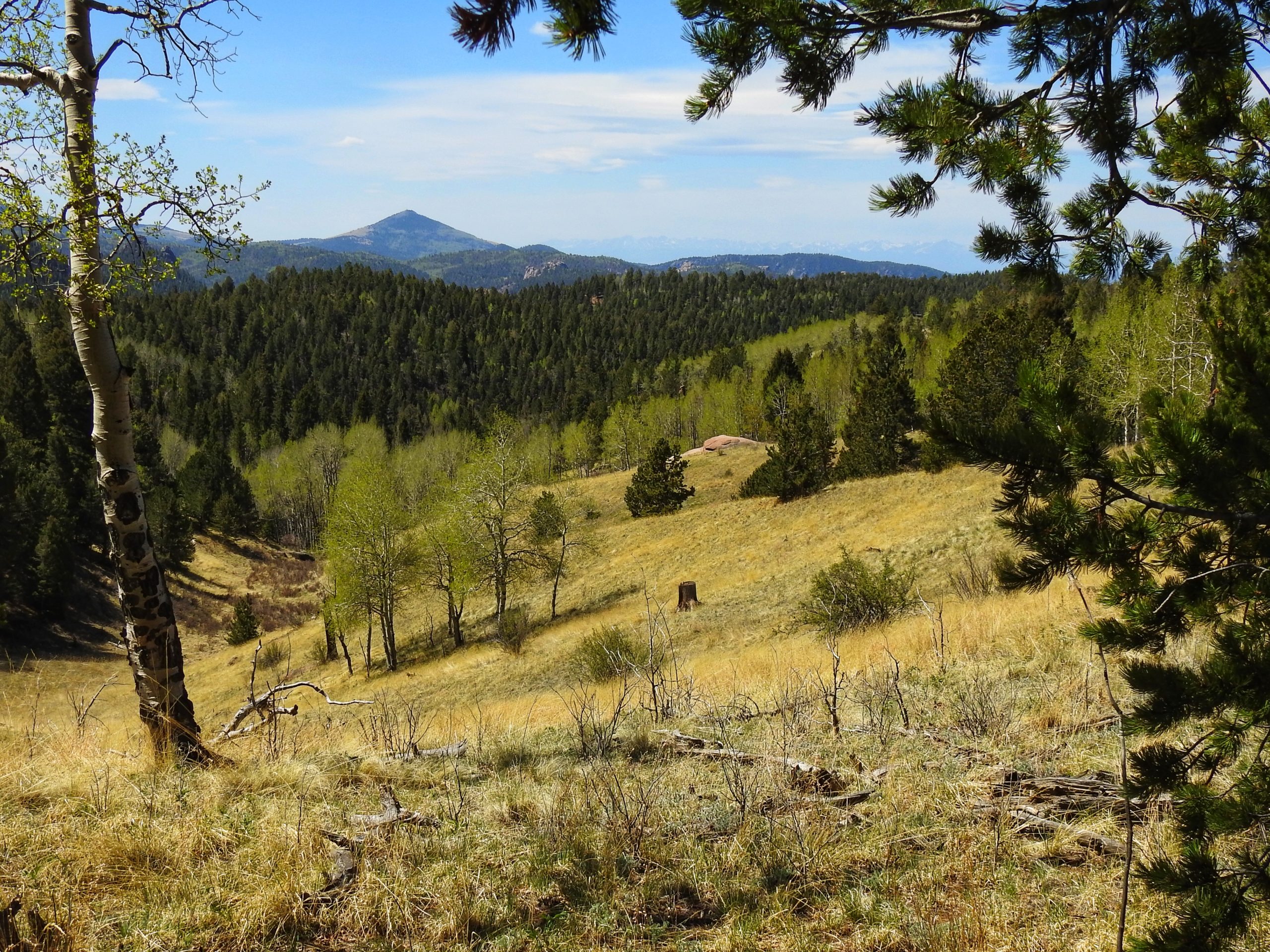 Abert’s Squirrel. I was hoping to get a photo of a black one, but had to settle for this more common color phase. The marking on its forehead look like the Batman symbol. It’s not glued to the tree or hovering in mid-air. It’s standing on very thin branches sticking out of the evergreen. 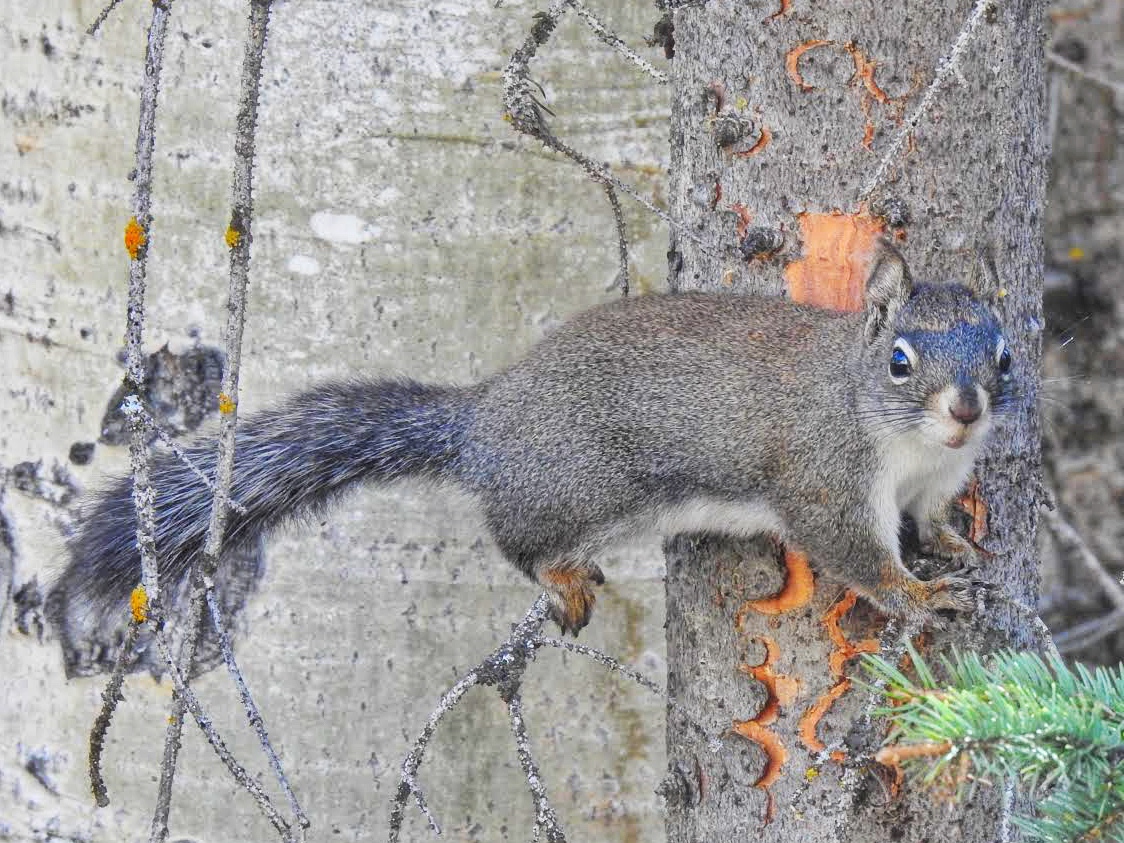 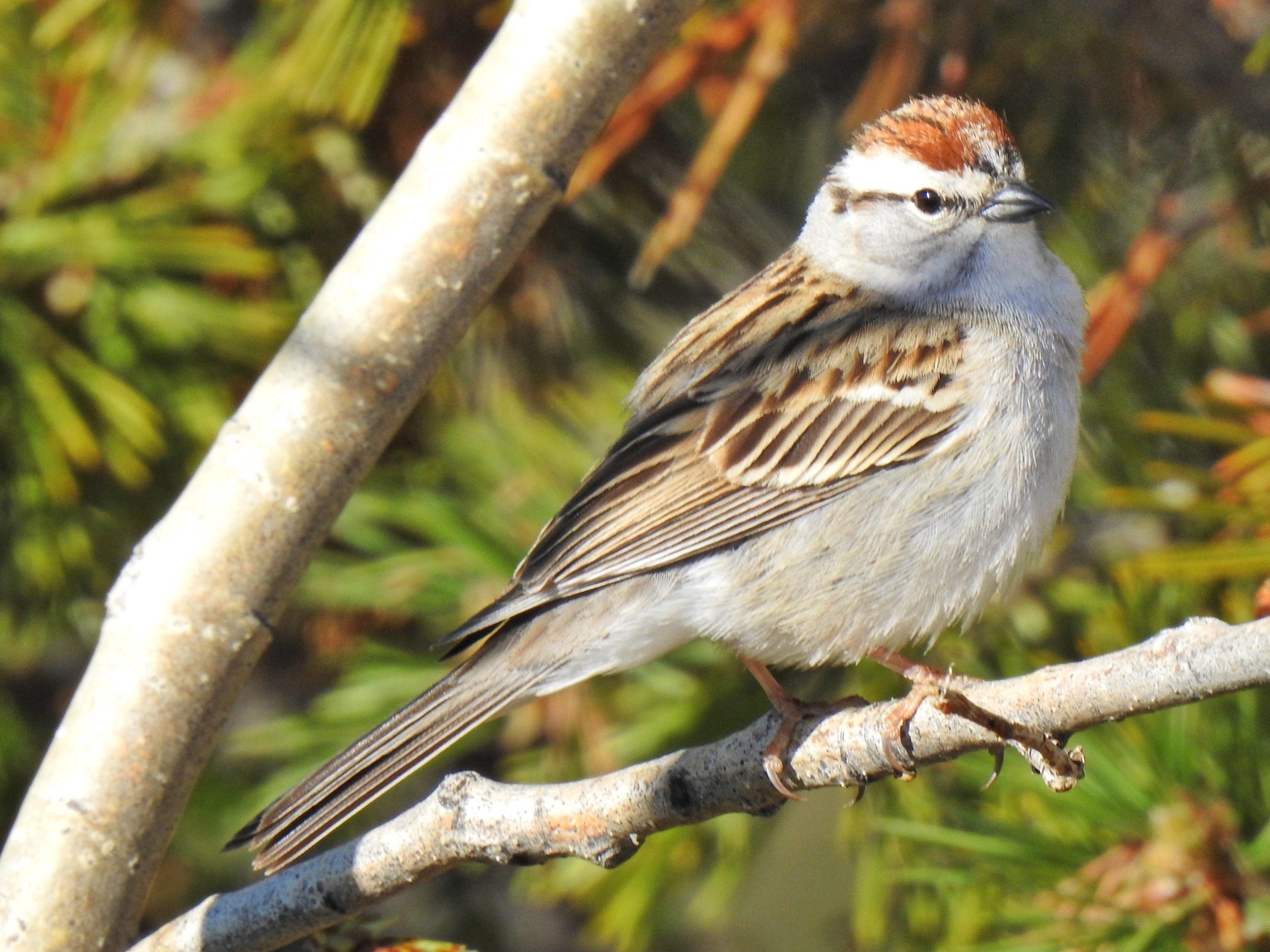 I’d walked more than halfway around the loop and had only seen one of my target birds—a Williamson’s Sapsucker—and that only briefly. But the day was beautiful (if windy) and I was alone in the woods and enjoying myself. And then magic happened. 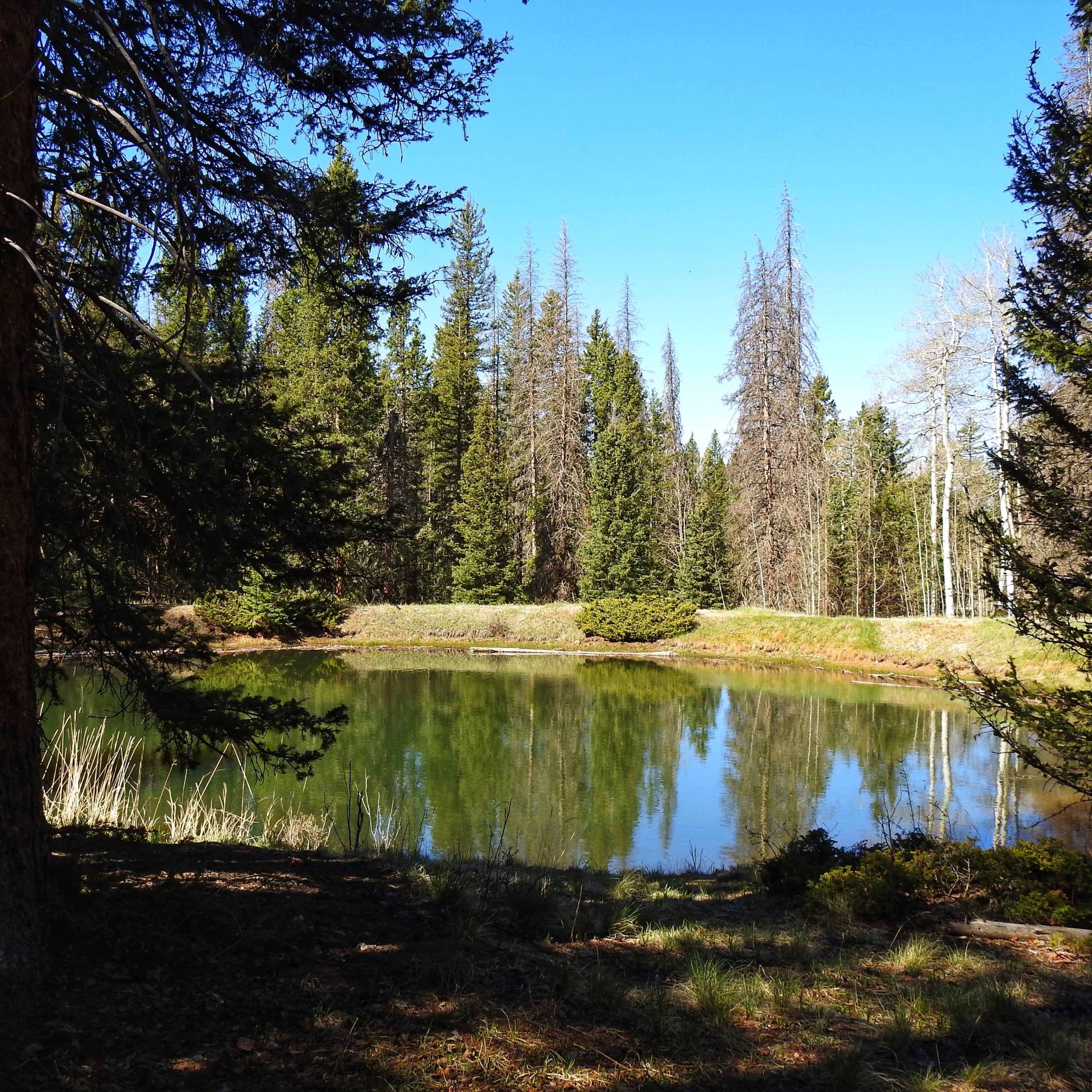 There’s a tiny man-made pond along a tiny creek, and as I approached I could hear the tapping of a woodpecker. I have always been able to find American Three-toed Woodpecker along this stretch of trail, so naturally I followed the sound. A female was stripping bark in a dead pine. Off and on for the next hour, I tried to get a good photo of it, but this is the best I could manage. 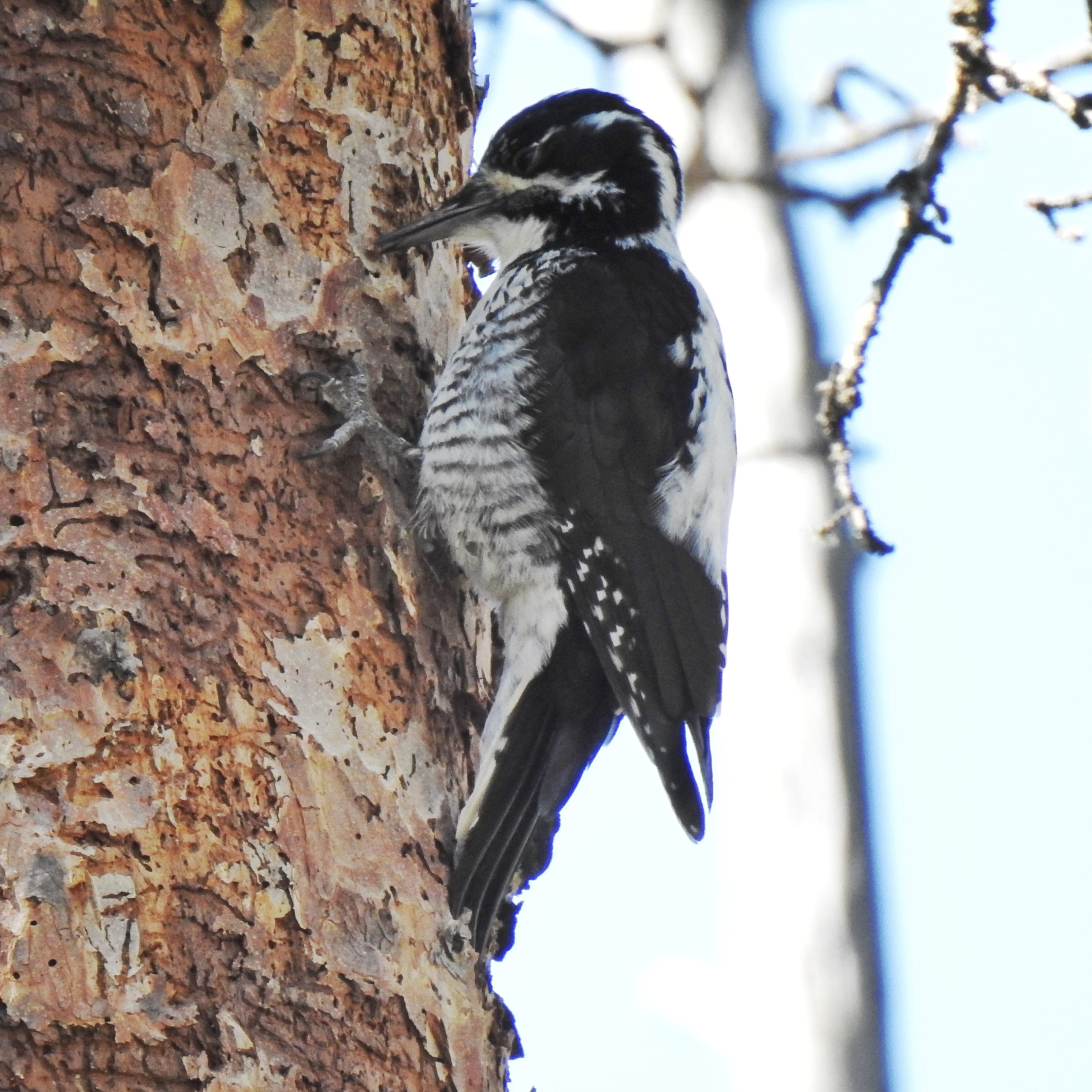 While I was watching the woodpecker, a male Evening Grosbeak landed in the top of a nearby tree. I couldn’t get any decent photos at that angle, but I haven’t often seen them away from feeders, so it was fun.

I wandered around to the other side of the pond, looking at Audubon’s Warblers, Ruby-crowned Kinglets, and Chipping Sparrows. I spotted to Canada Jays hovering in the area. 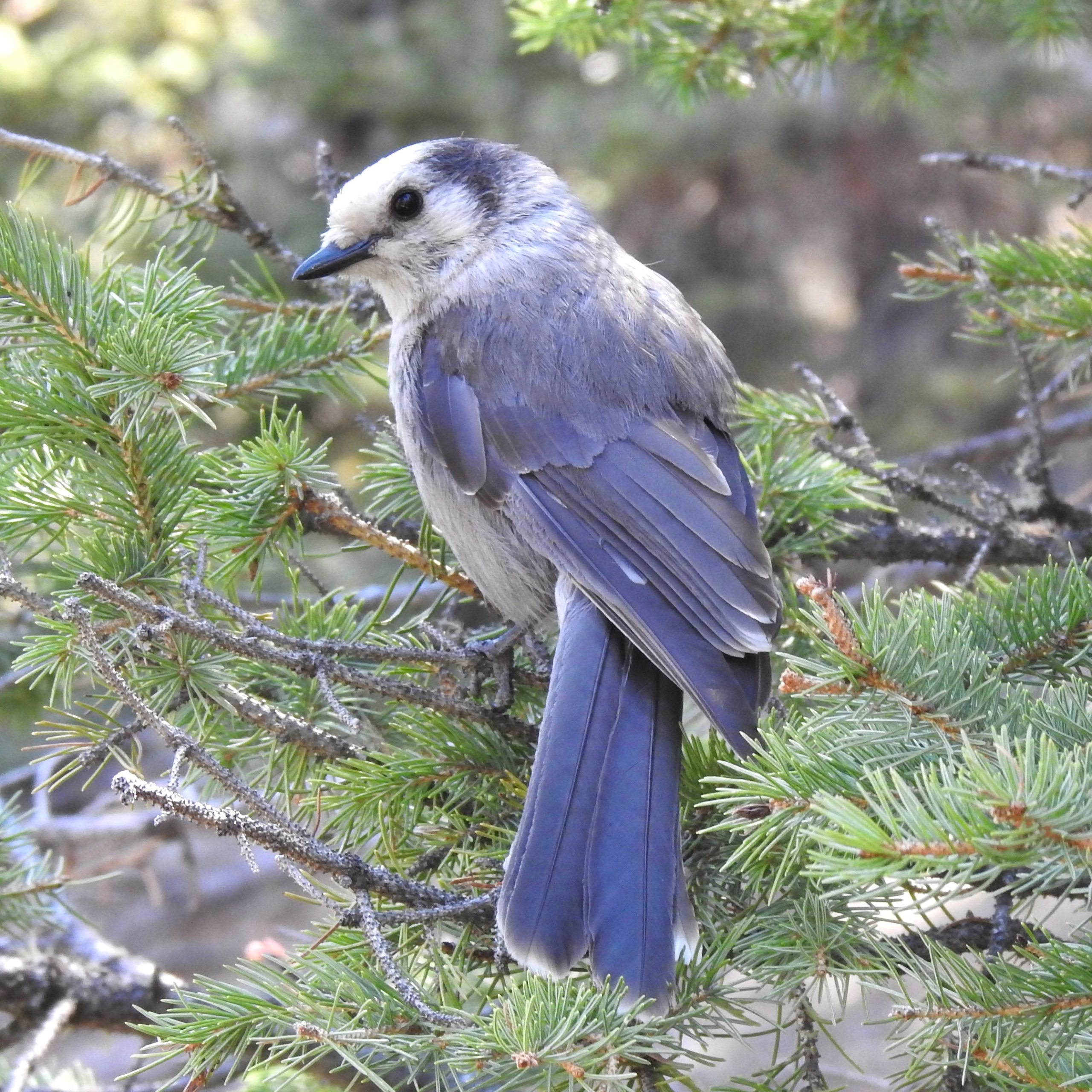 I’d come prepared. I had a pocket full of trail mix, and for the next 15 minutes, I did this.

At first they were skittish and did fly-by snags. Even when they began landing, they wouldn’t stay long. So I began wedging the peanuts between my fingers to make them work a bit. By the end, they were landing and eating and paying me no mind whatsoever. At least one of them was. The one with the streakier breast remained more nervous and may have only landed on my hand once. 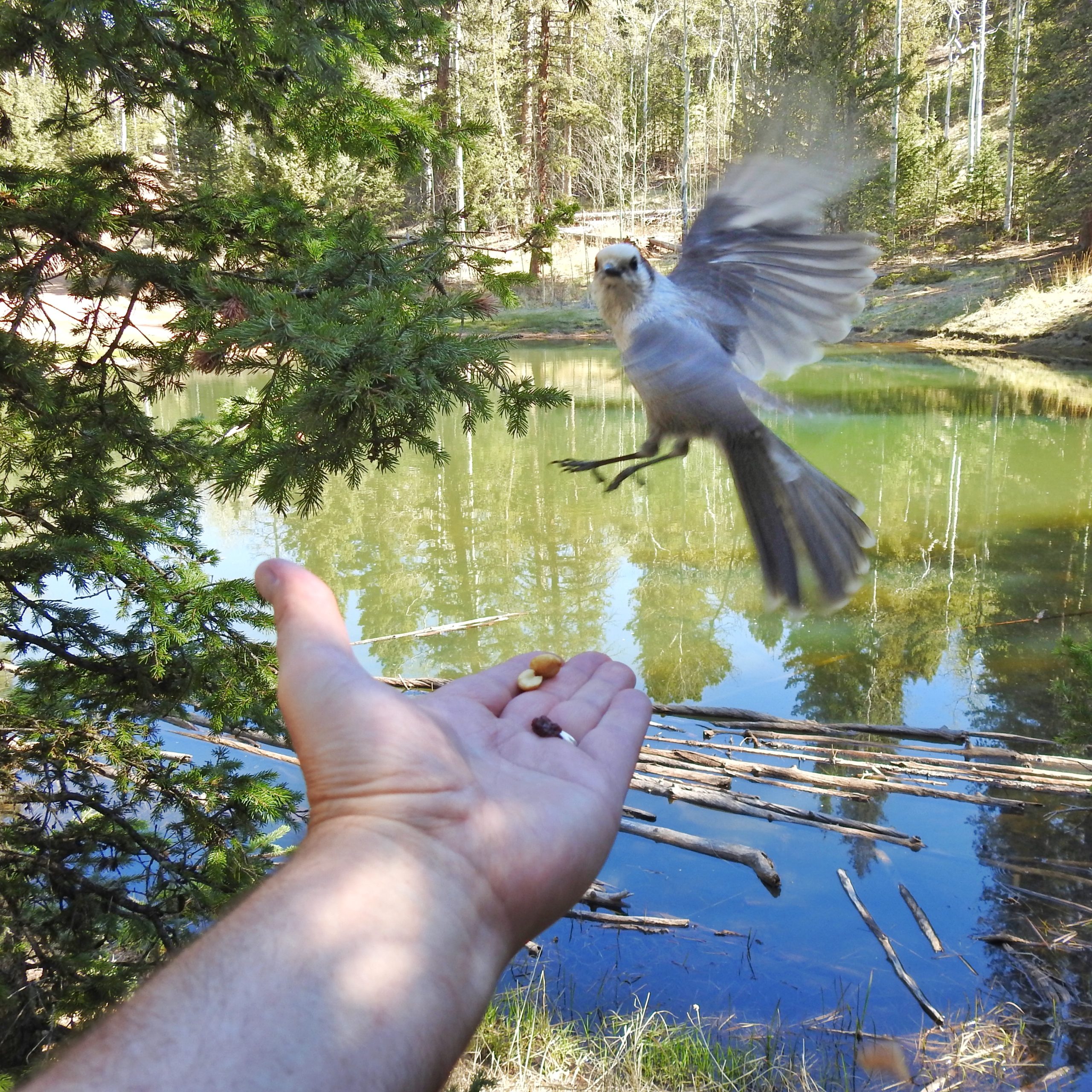 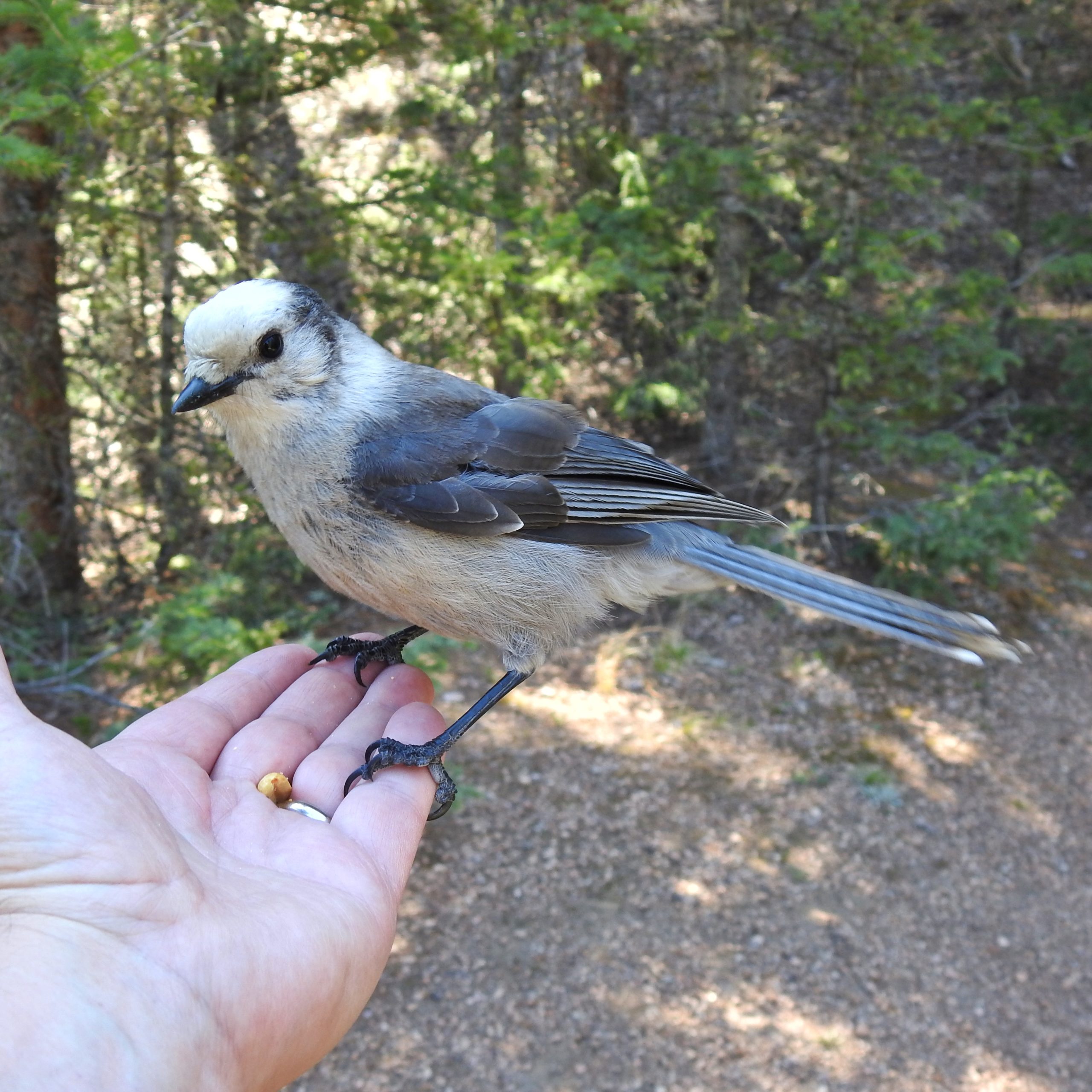 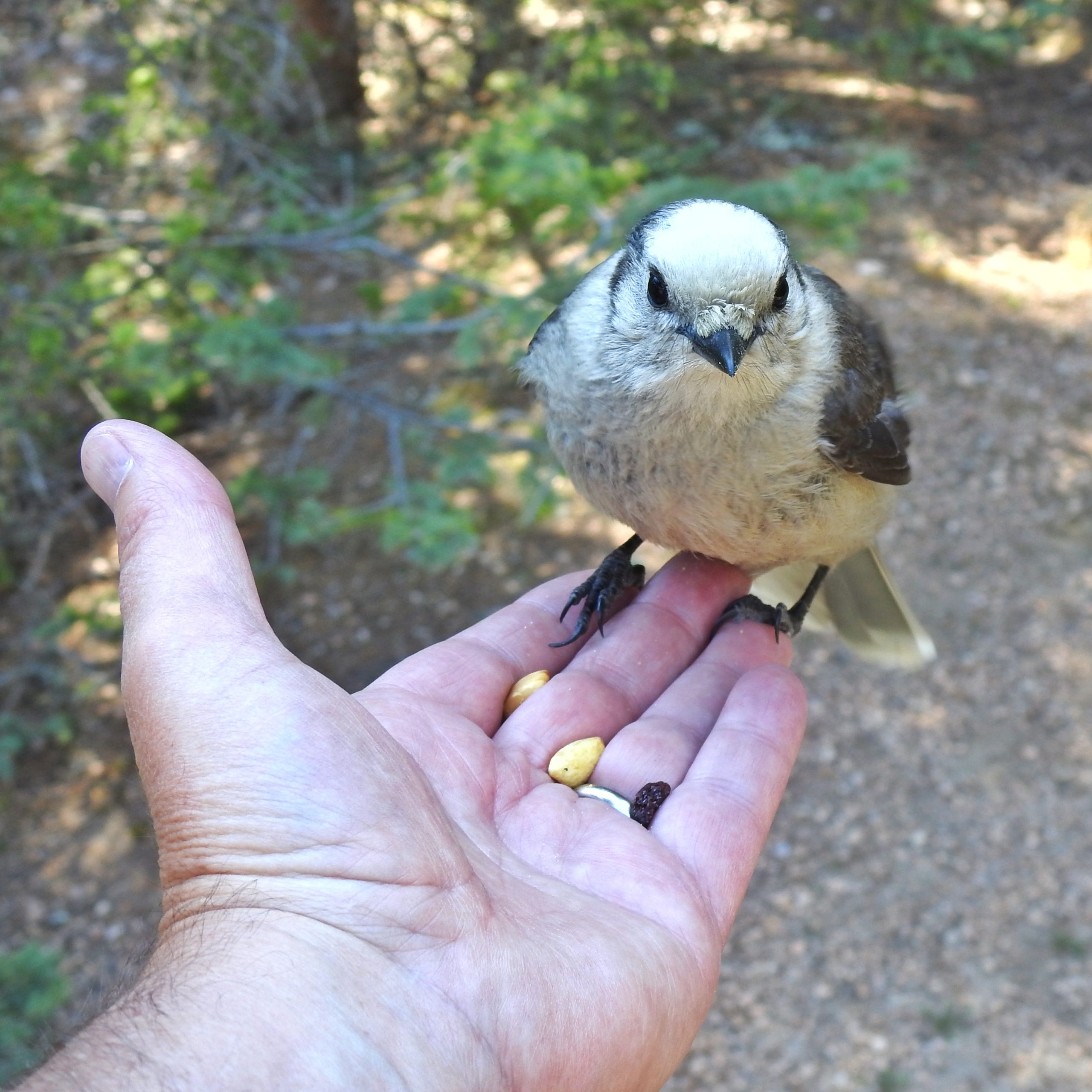 After I ran out of food, they continued following me through the woods for 15 minutes or so. 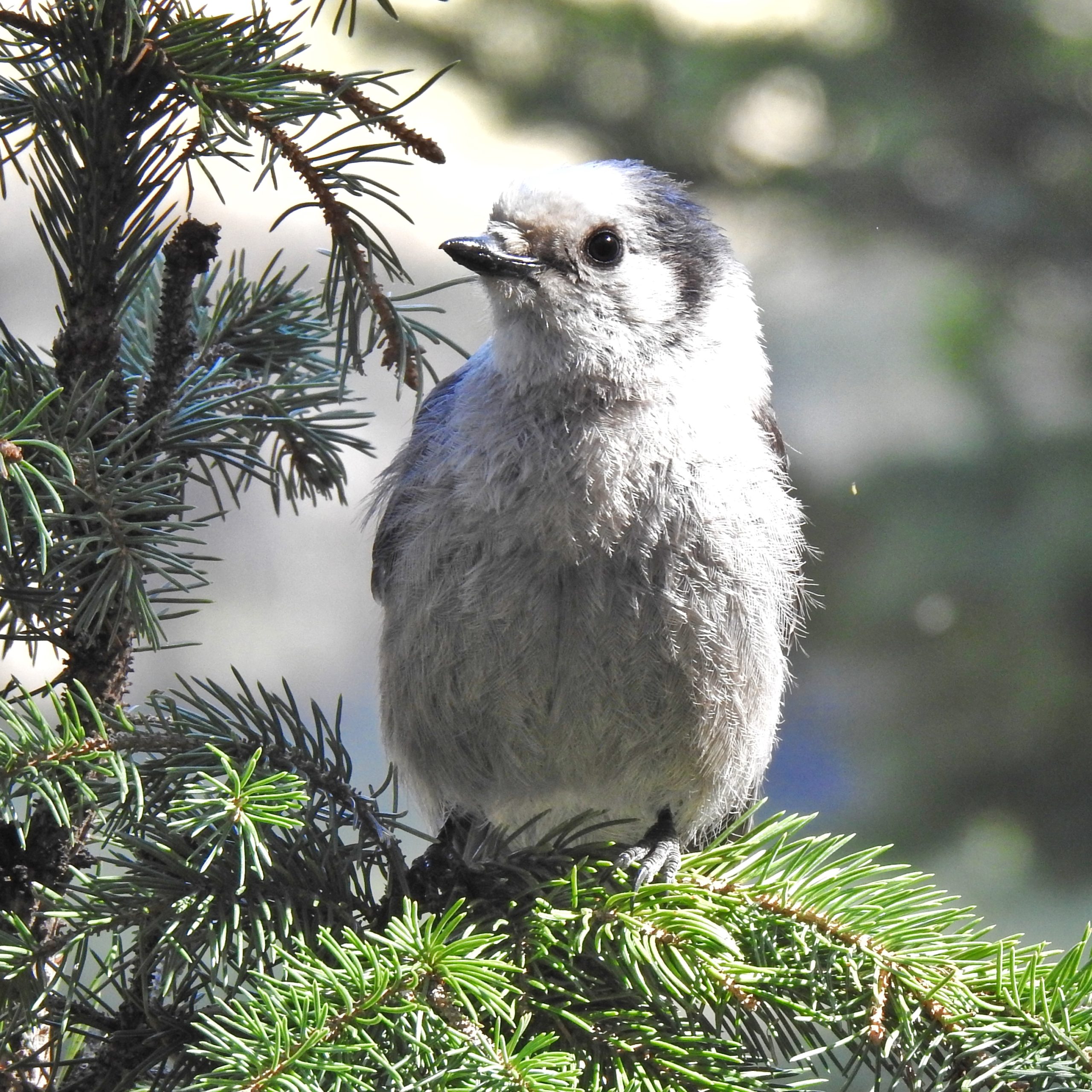 I returned to trying to get a good photo of the Three-toed Woodpecker, still without much luck. As I was doing that, I saw two Clark’s Nutcrackers fly high overhead. I’m not sure why, but I haven’t had a lot of luck with nutcrackers in Colorado. I’ve seem them here and there since I moved to the state, but always flying and usually at a distance. After a few flyovers, one of these landed in the top of a dead pine and began calling. It’s the first really good looks I’ve had at them since my lifers back in 2002. 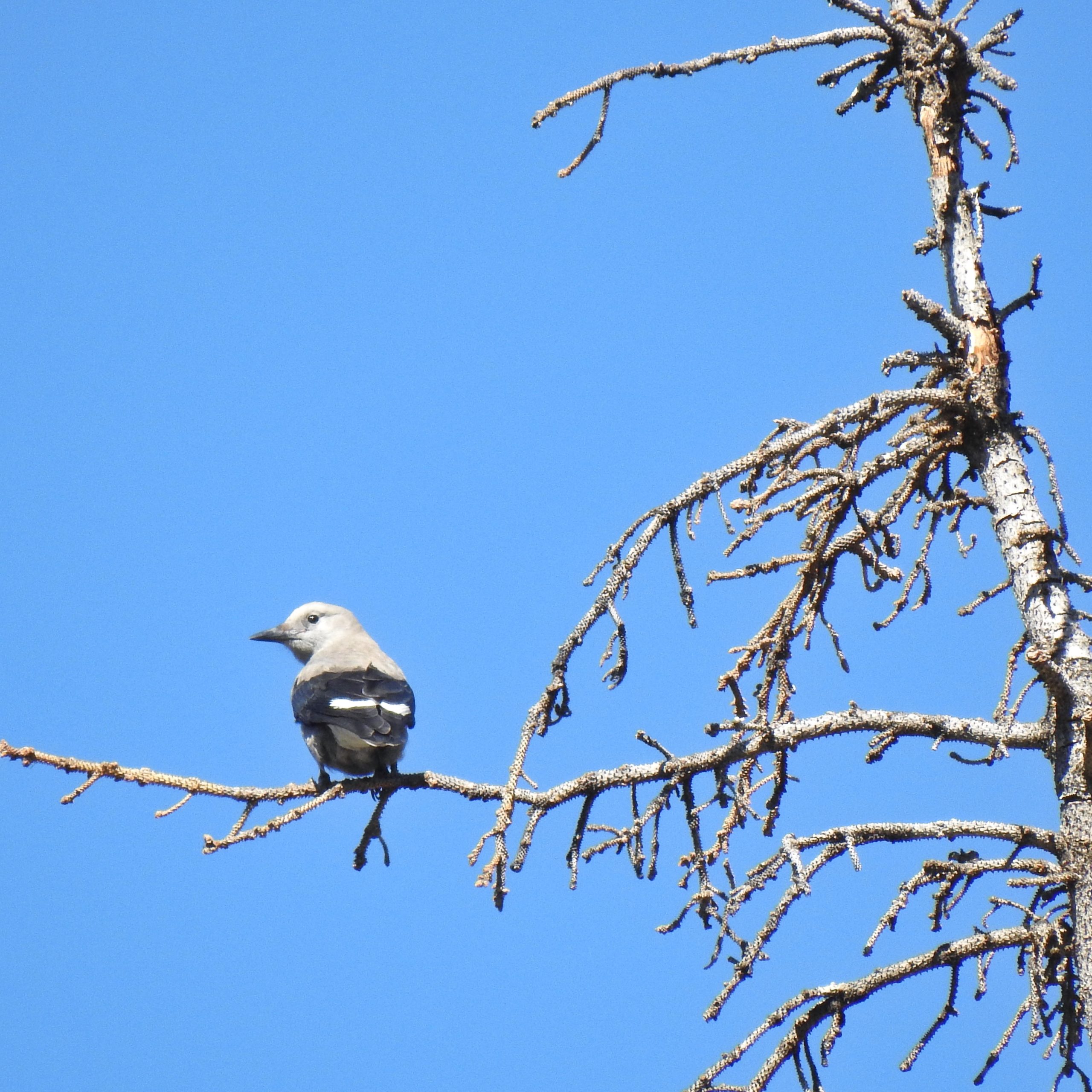 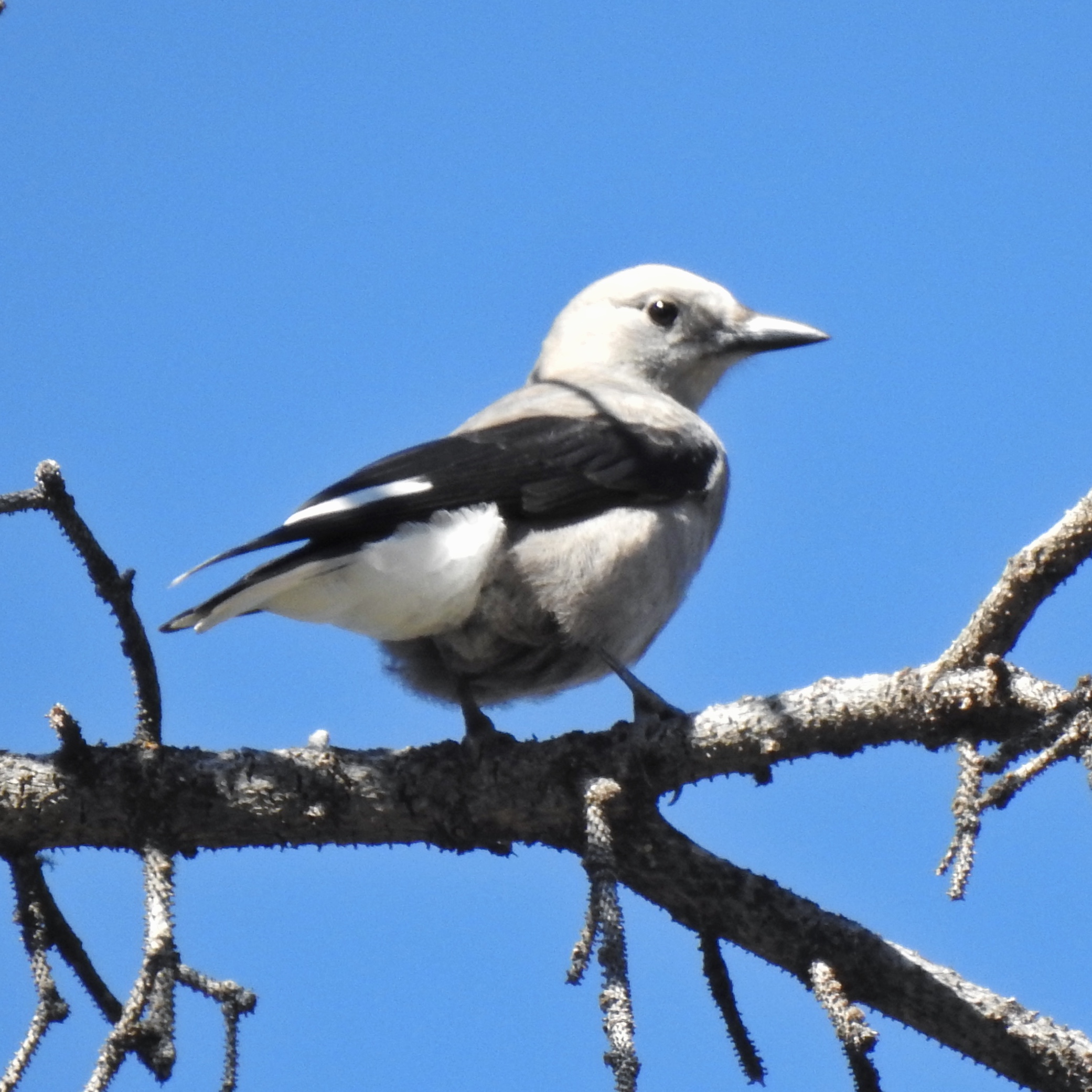 I went back to the Three-toed Woodpecker again. She was hanging right around the pond and was easy to find by her tapping. I was waiting for her to reach a spot on a dead pine where I could take a photo when I noticed a male on an aspen maybe 15 feet away from me. 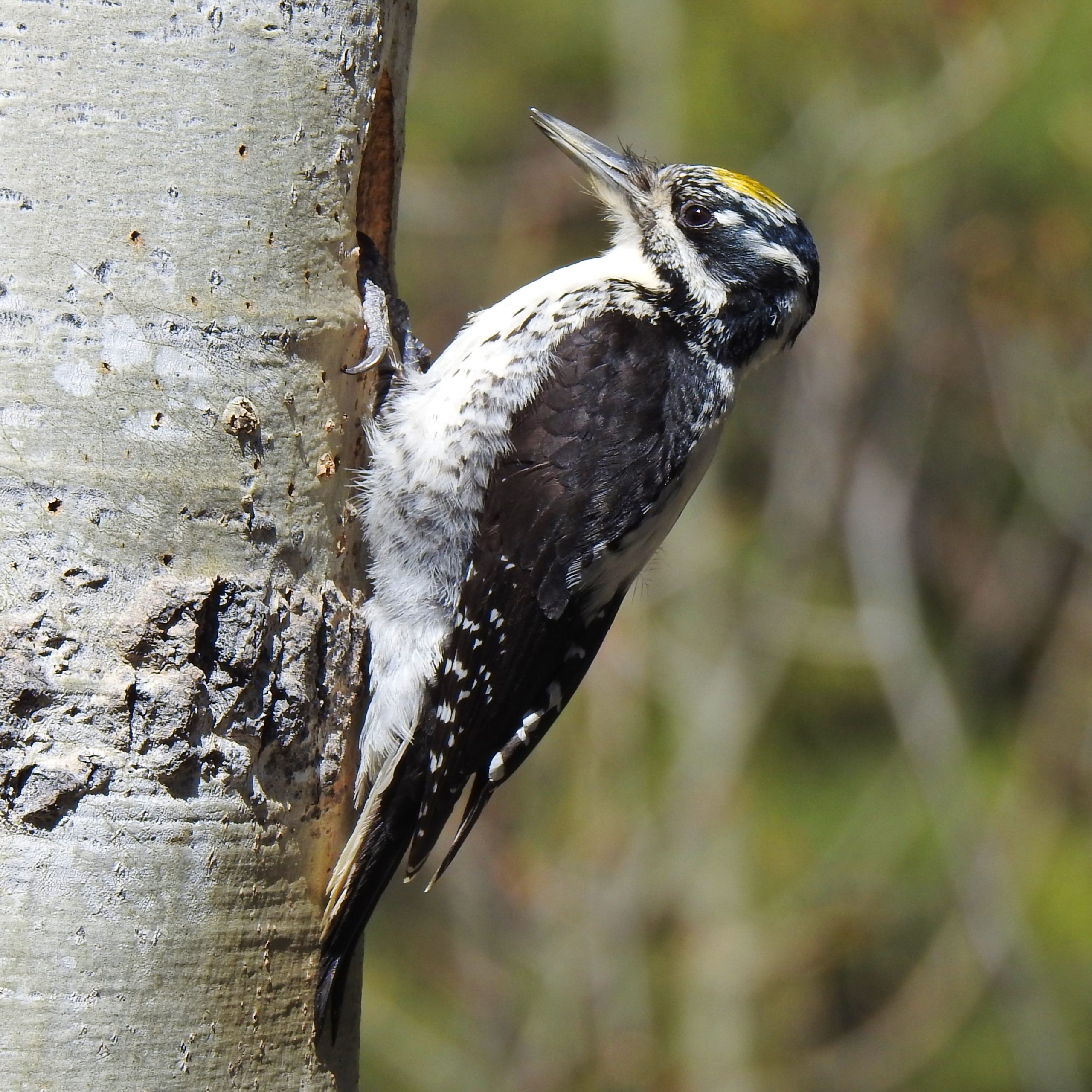 He climbed into a hole and began removing wood chips. 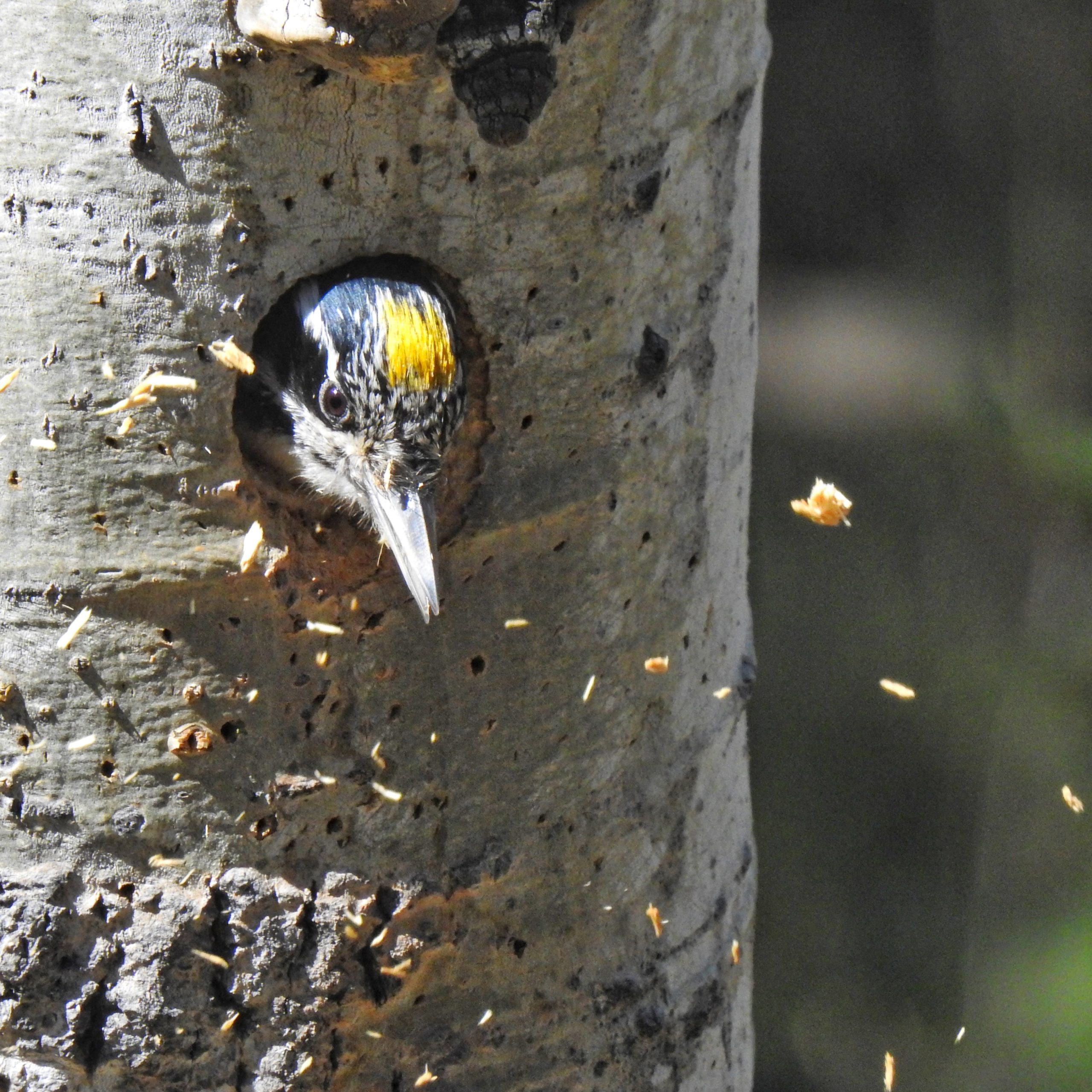 I drove 20  minutes to Vindicator Valley outside Victor and walked the trail there. My objectives, besides enjoying the scenery and the history, were Green-tailed Towhee, Dusky Flycatcher, and Cassin’s Finch. I had no problem with the first two but never saw the third. 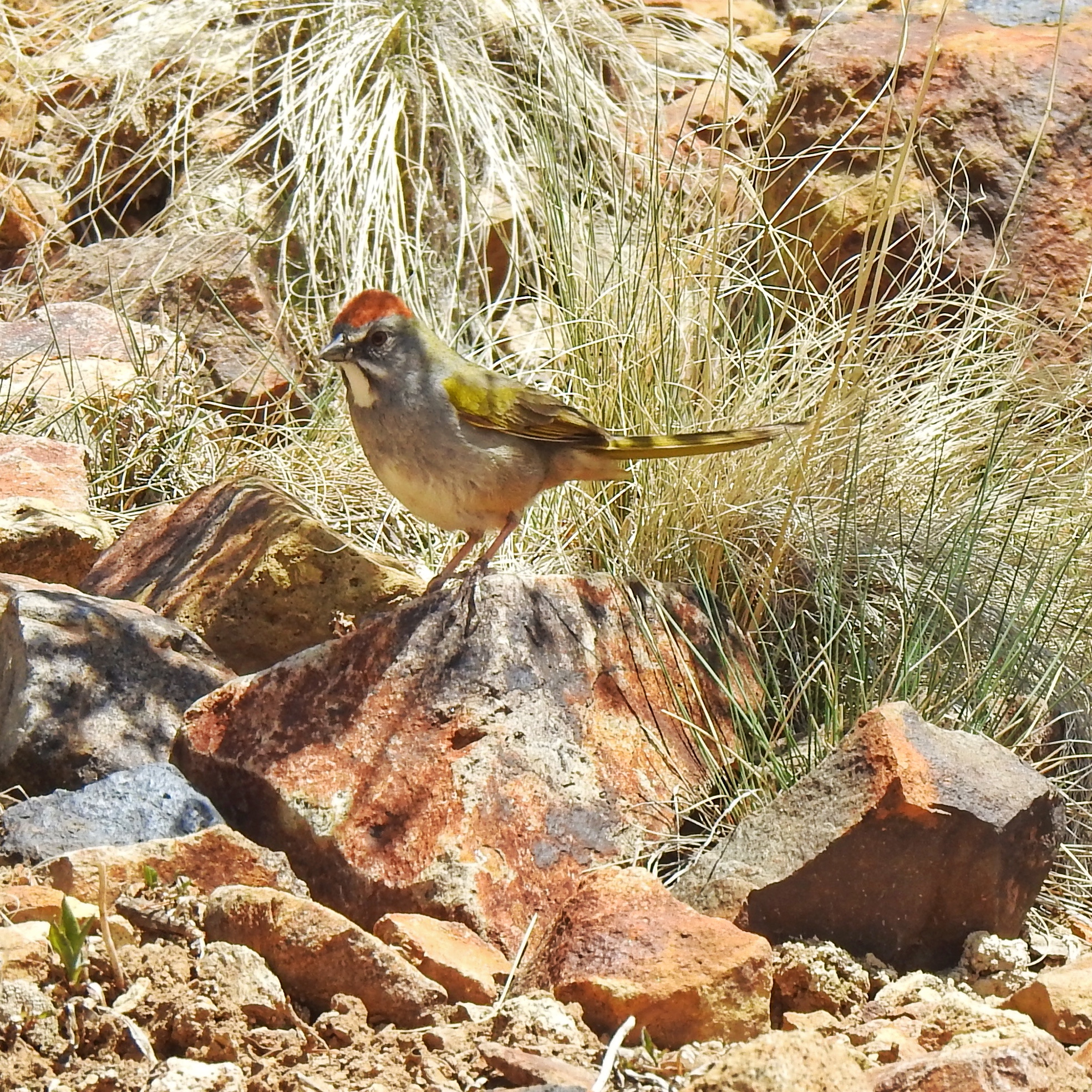 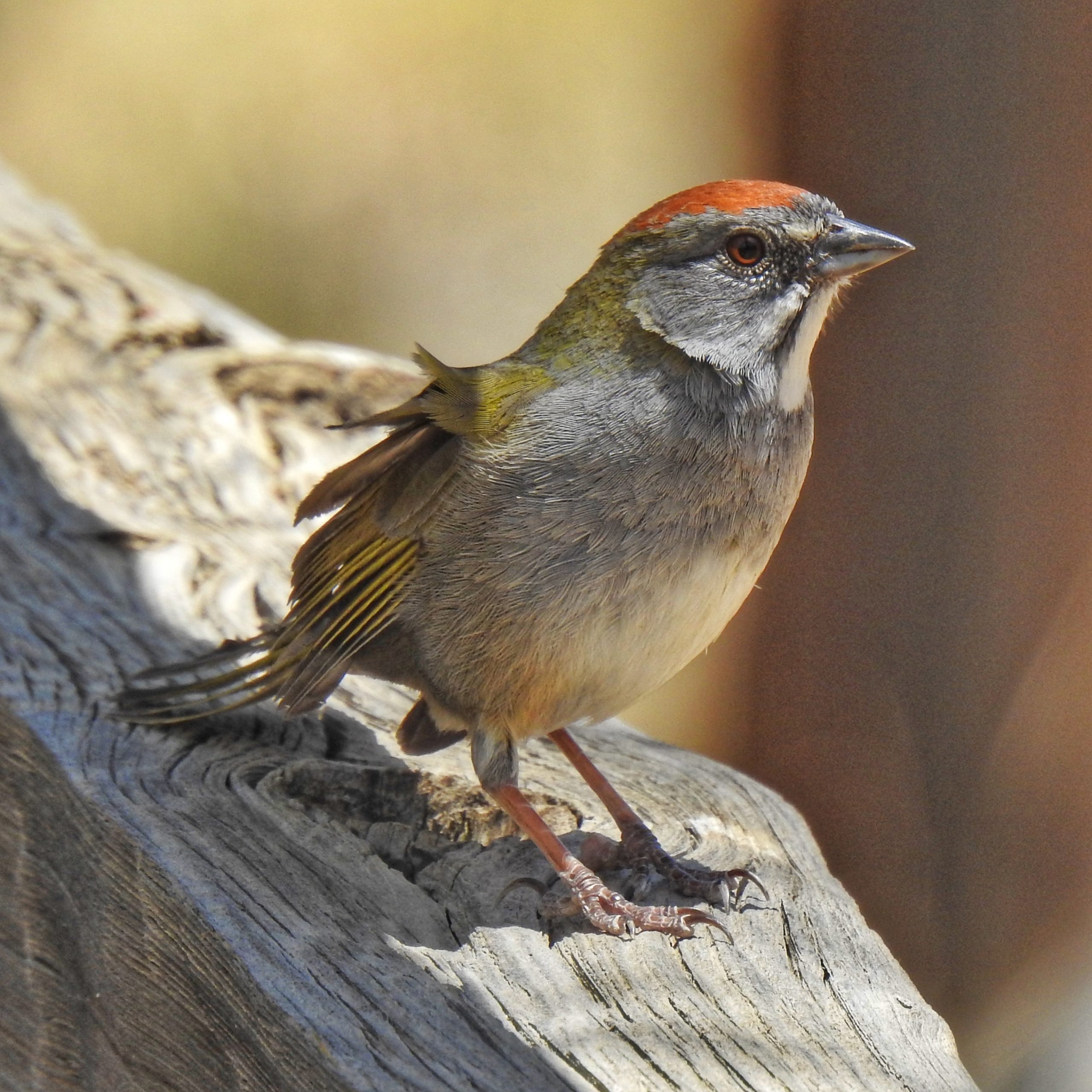 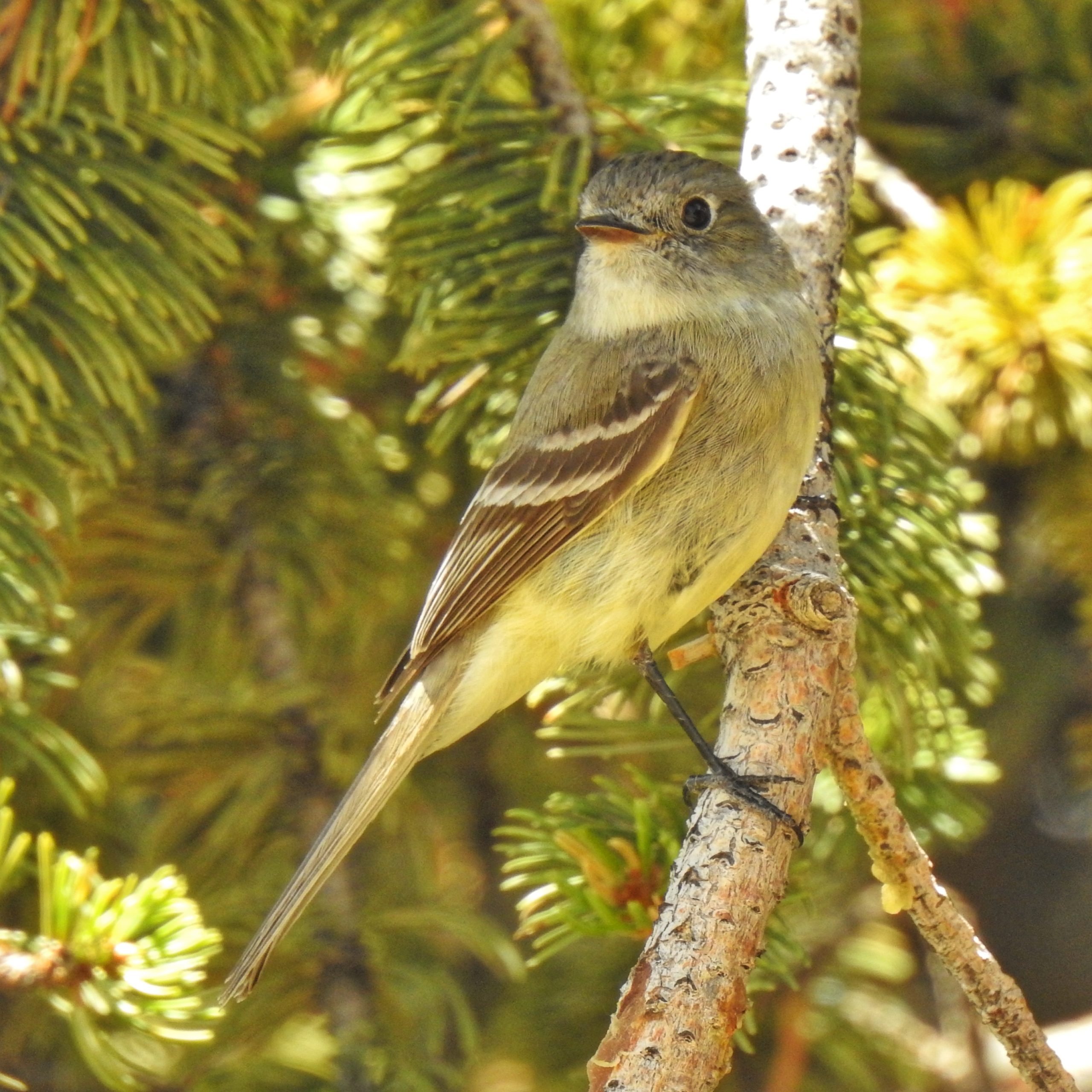 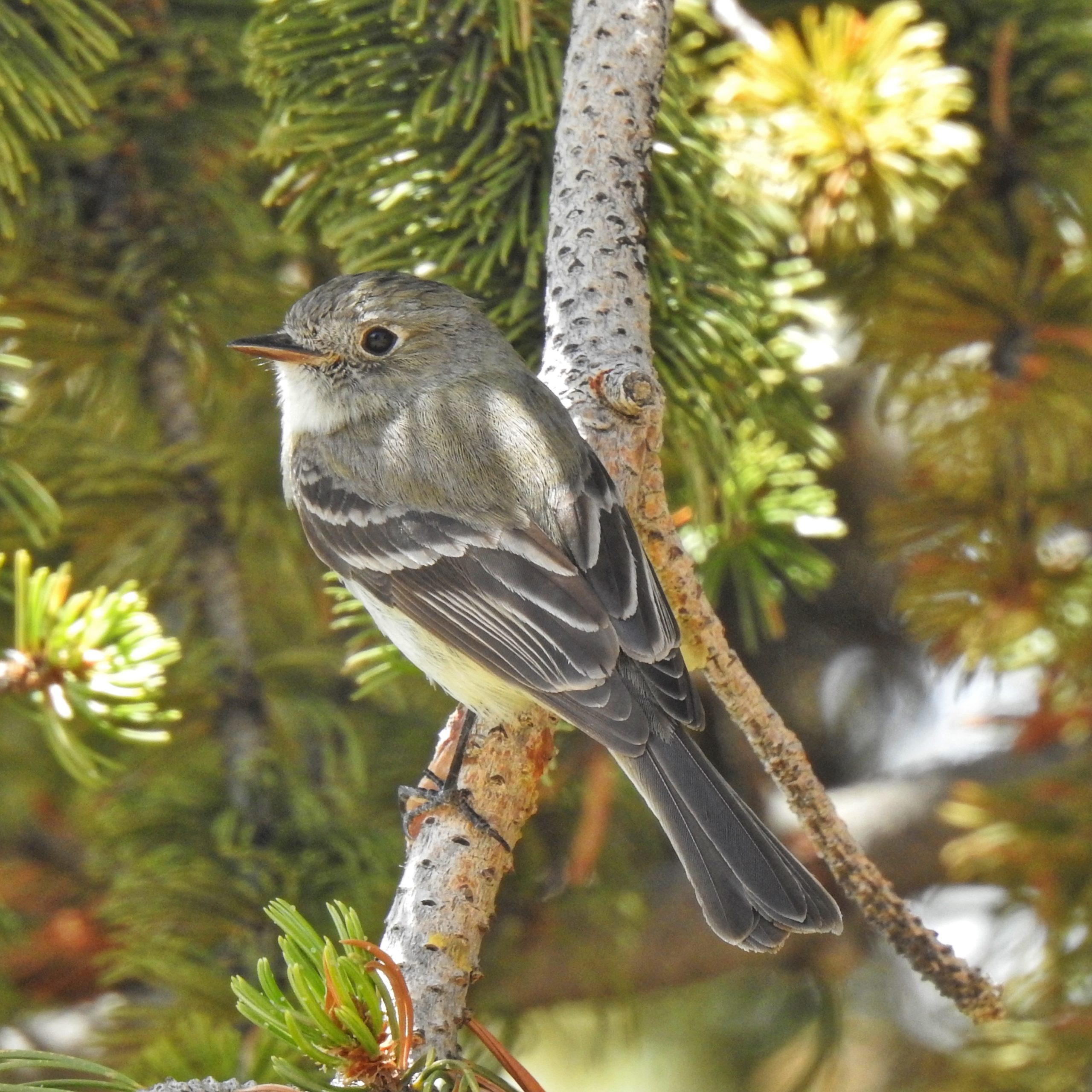 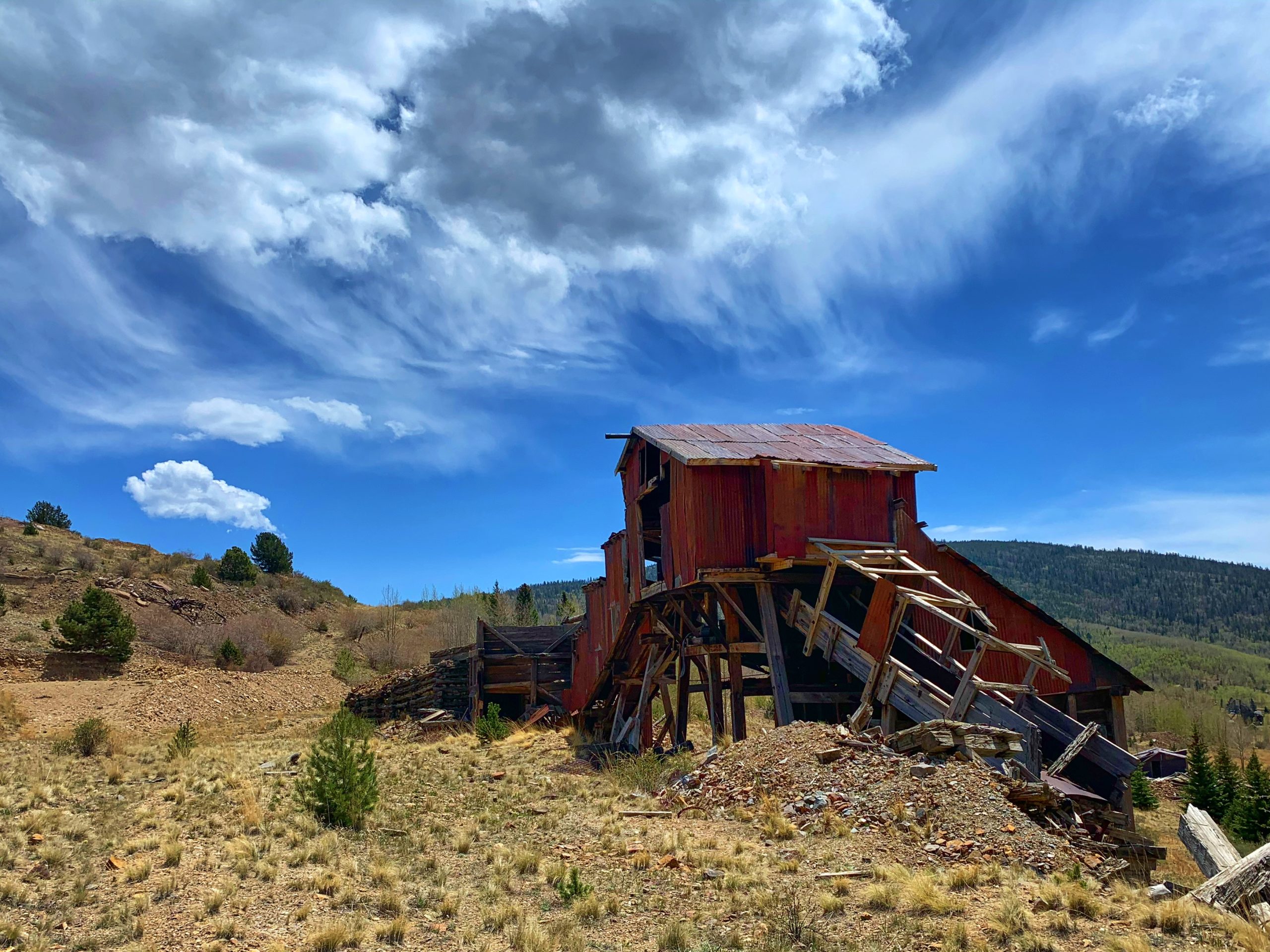 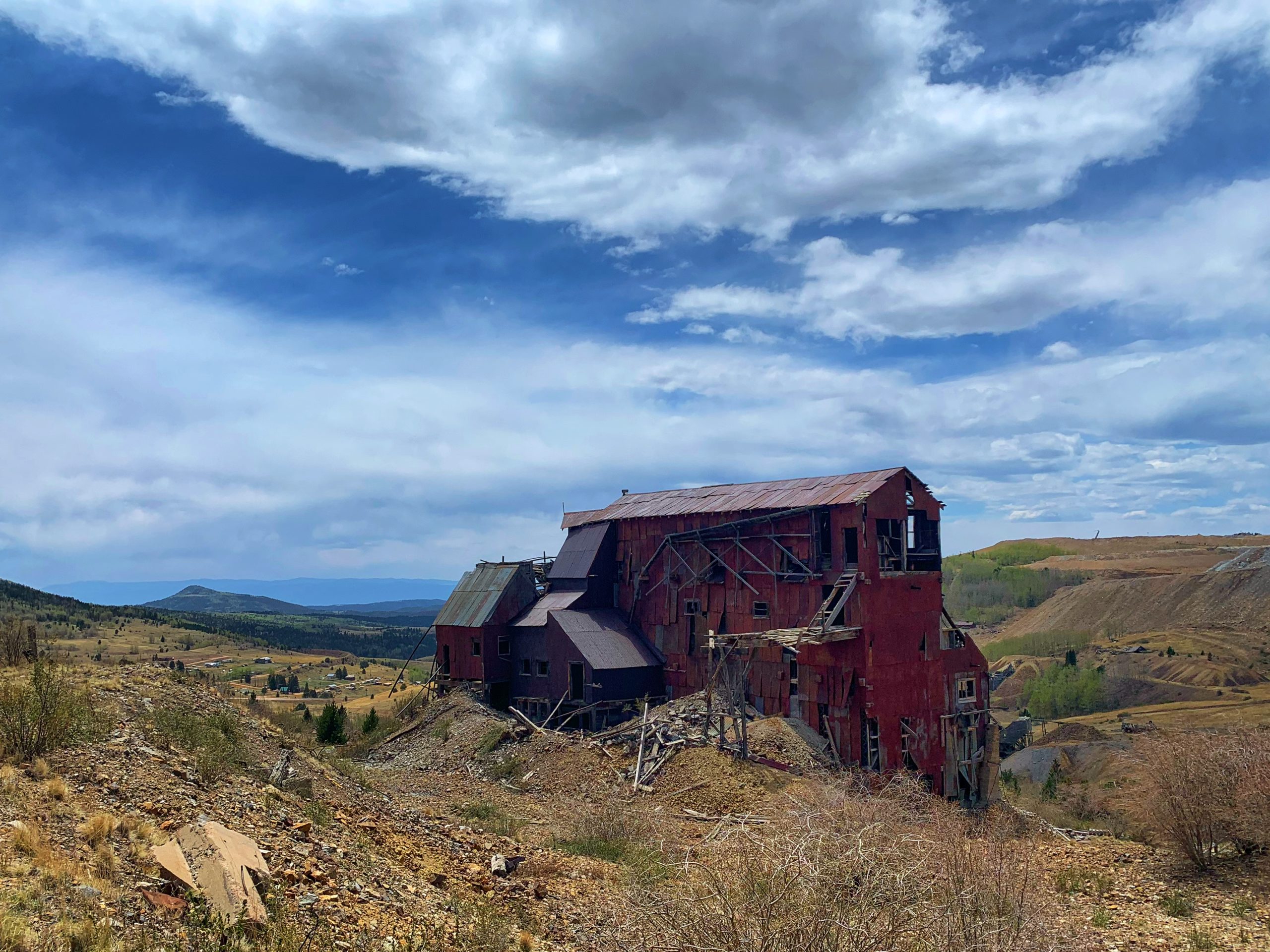 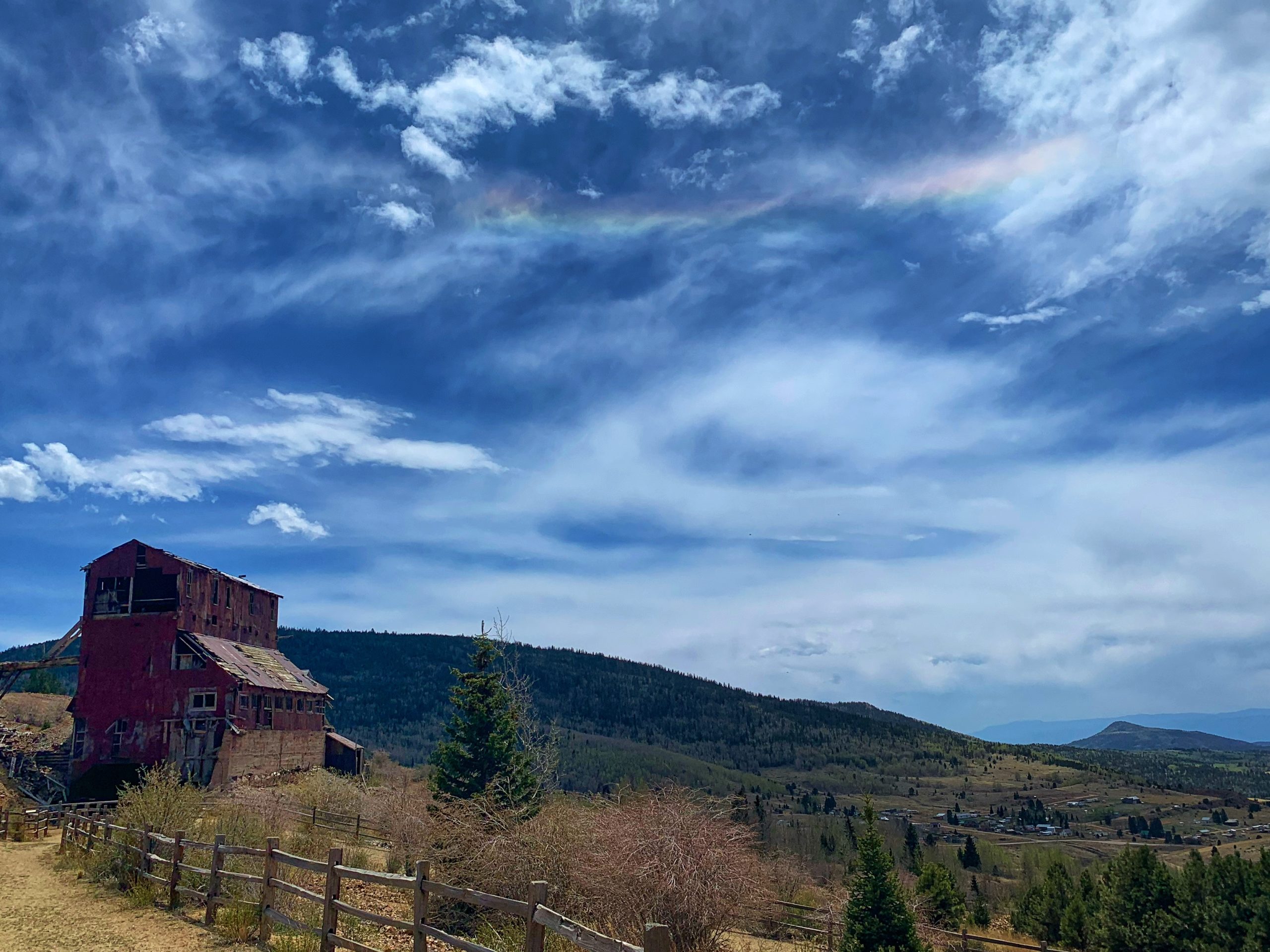 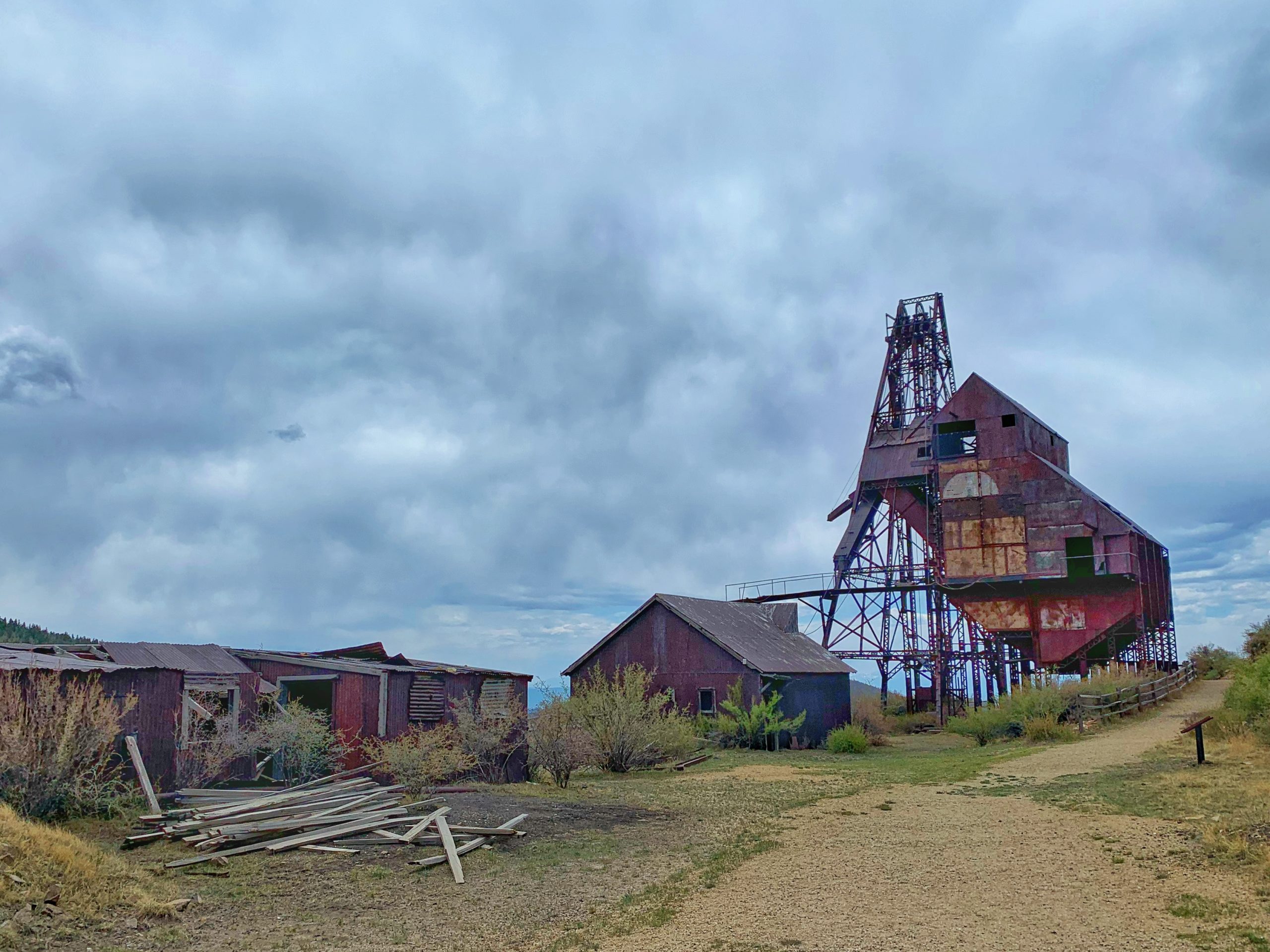 At Vindicator Valley, I also saw this Gray-headed Junco that looks like it can’t quite figure me out. 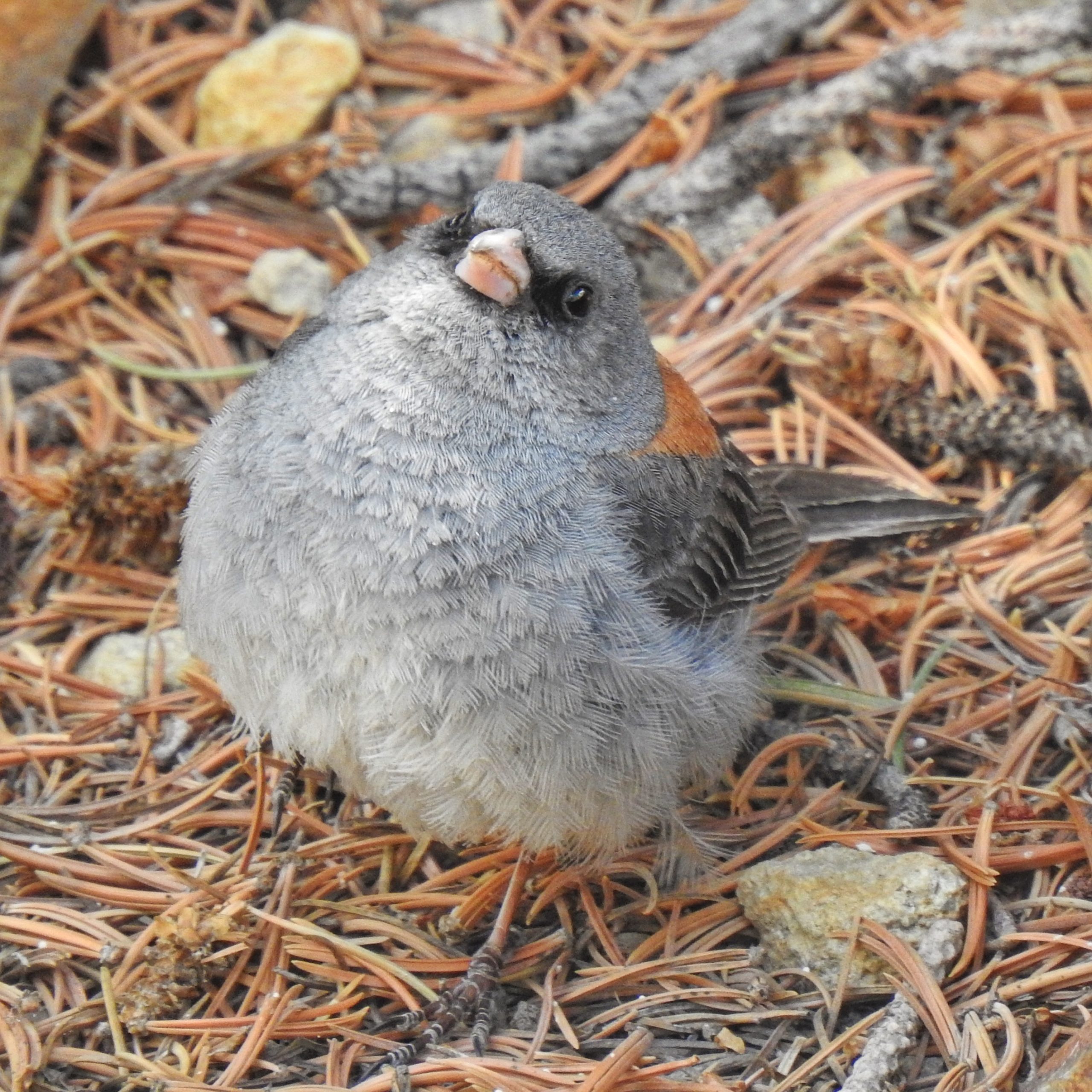 The clouds were rolling in by the time I left, but I decided to hike at Florissant Fossil Beds National Monument anyway. The visitor center and main parking lot are closed because of the virus silliness, but I was allowed to park by the Hornbeck Homestead and walk the trails. There were a few other cars in the lot, and I saw a few people on the nearby trails, but once I got a ways from the lot, I was again alone. The weather looked dicey for a bit, but then the clouds cleared away and the day was beautiful again.

Wyoming Ground Squirrels have a colony by the Hornbeck Homestead. 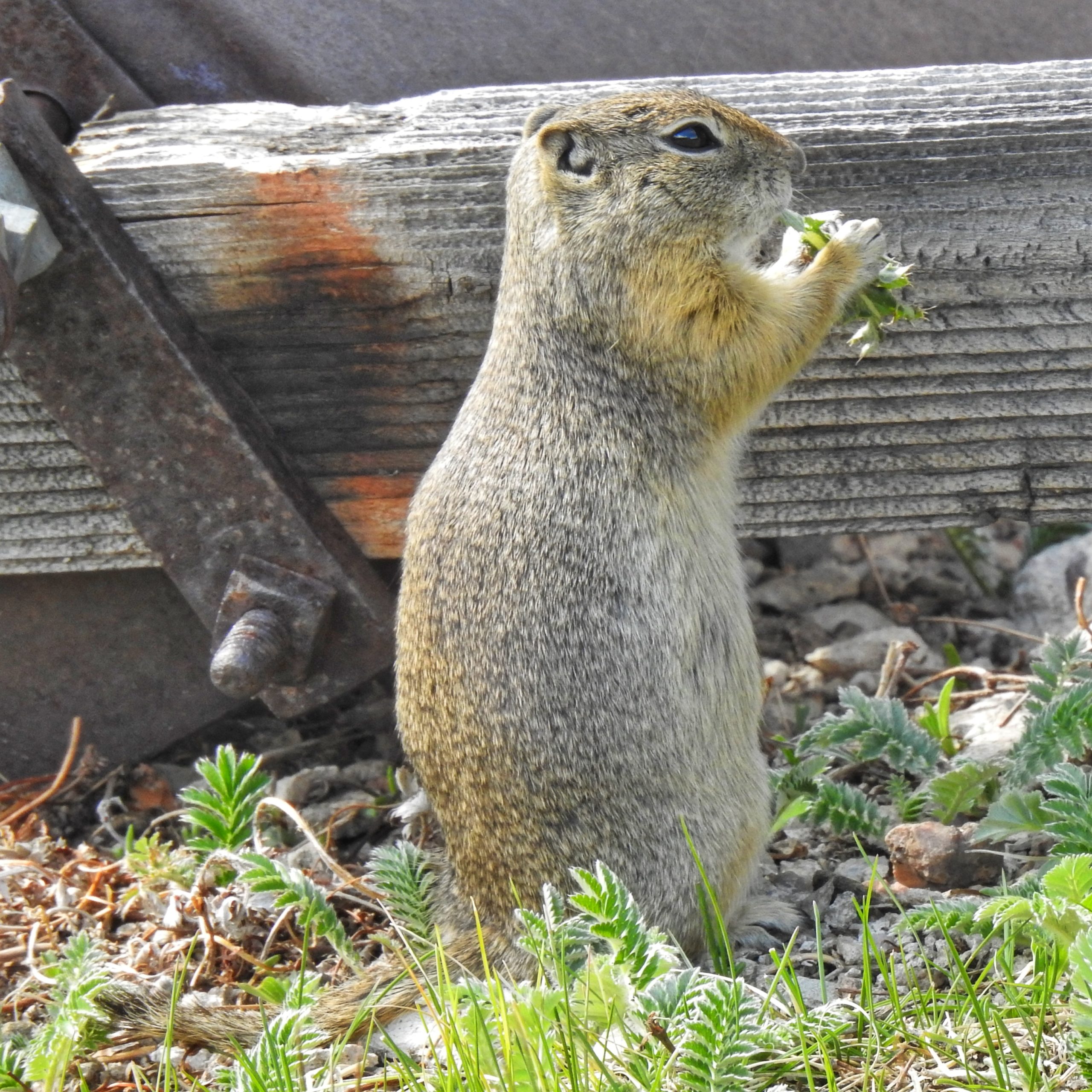 I was hoping for a good photo of a Williamson’s Sapsucker. There were several around, of both sexes, but they were easily spooked, and this is the best I could do. It’s a stunningly-beautiful bird, and more so in flight. 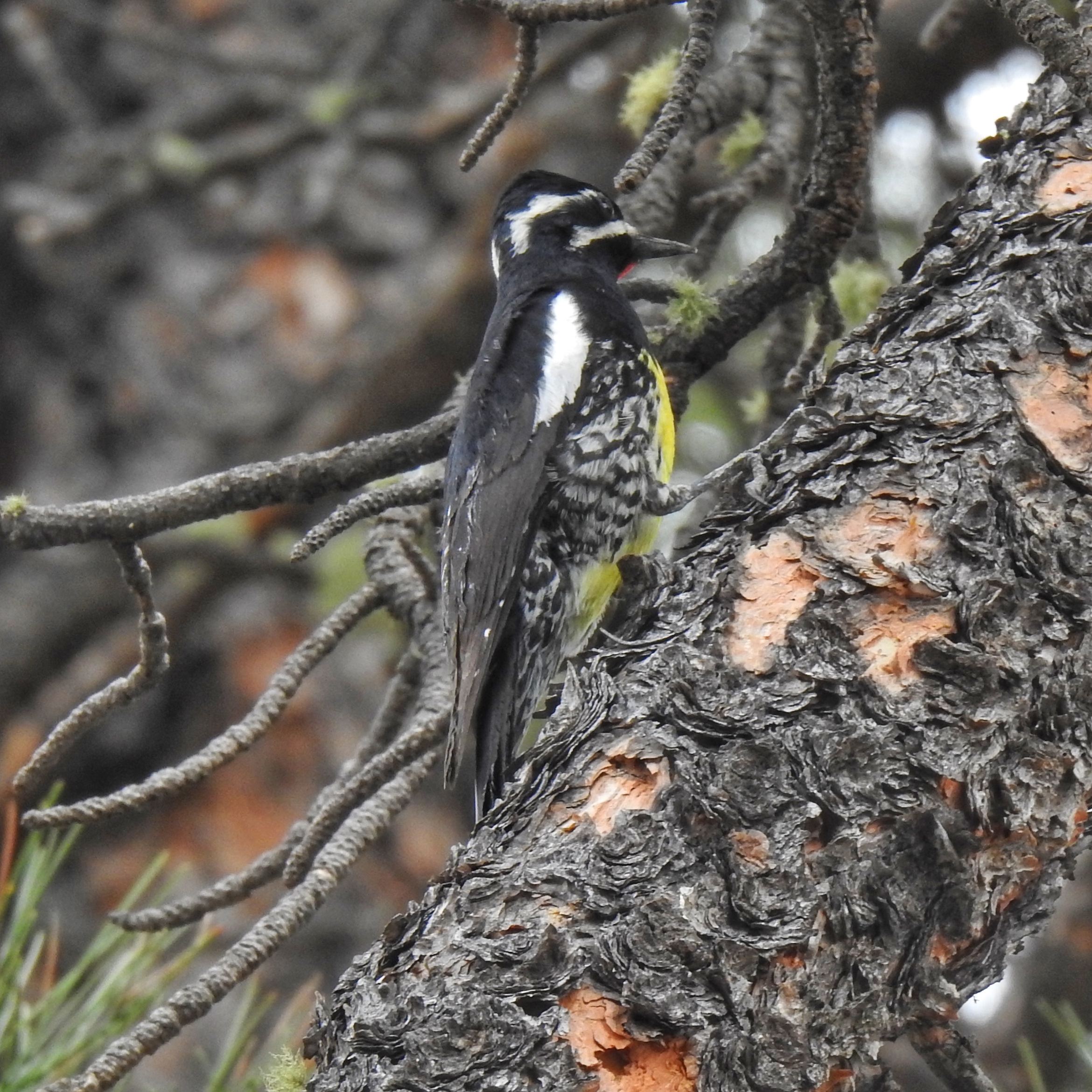 I happened upon a small section of creek with running water and stood maybe 15 feet away for about half an hour, watching a steady parade of birds come to drink. I saw a pair of Robins, all three Colorado nuthatches, Mountain Chickadees, a pair of Red Crossbills, a pair of Evening Grosbeaks, Hairy and Downy Woodpeckers, and even two Common Ravens (that didn’t come down to drink while I was there but came very close before they spotted me and landed in nearby trees). An Abert’s Squirrel also stopped by. It would have been a cool place to spend a day. 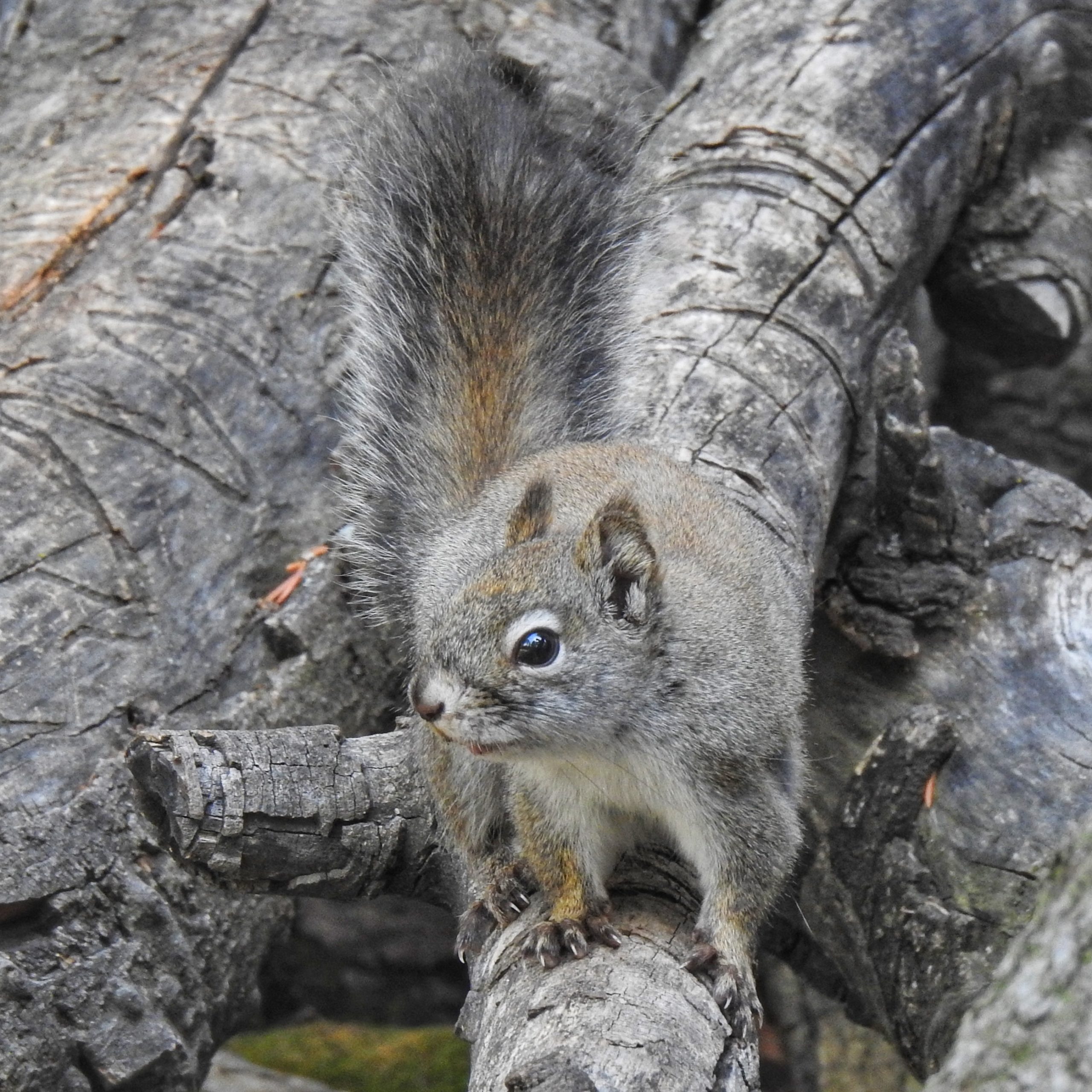 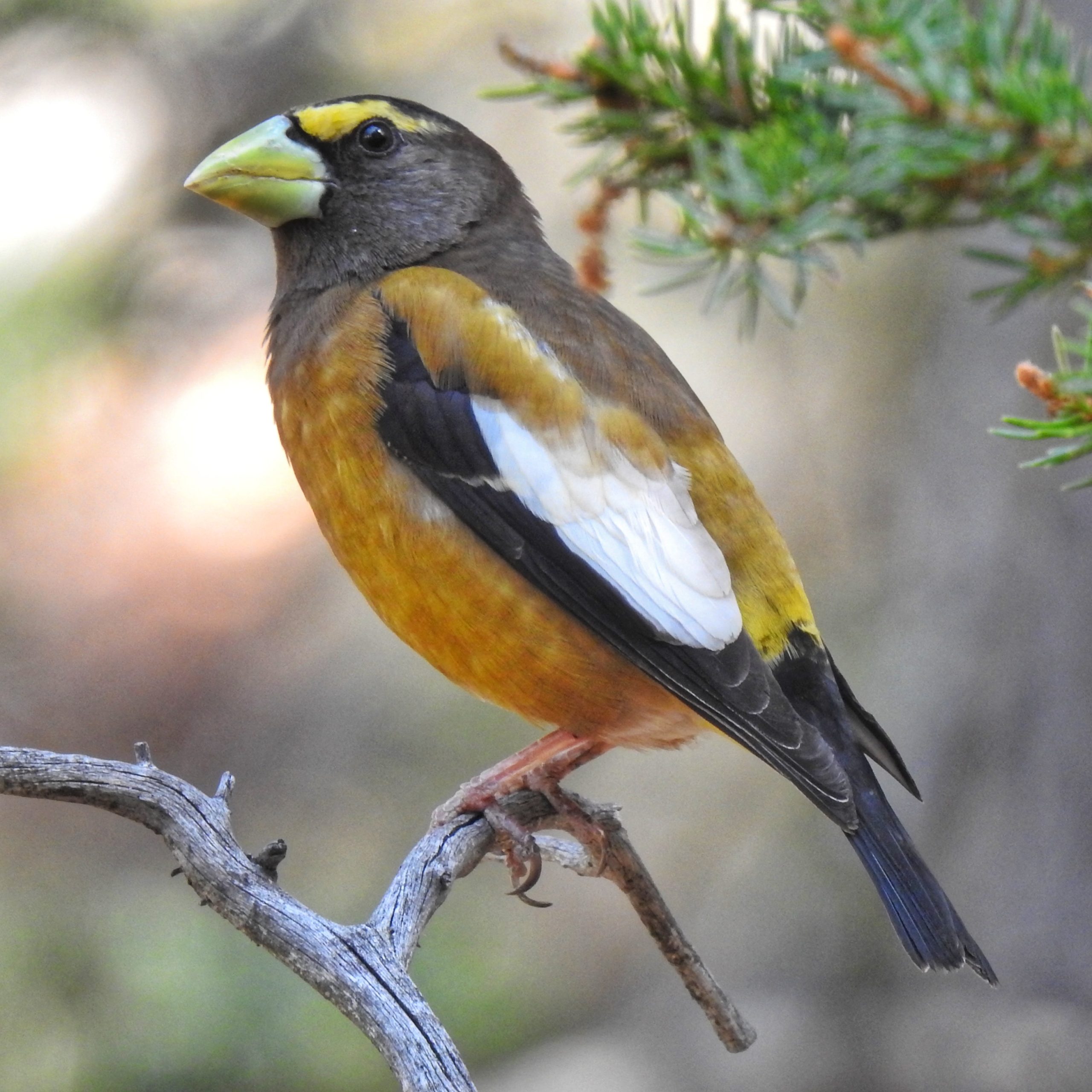 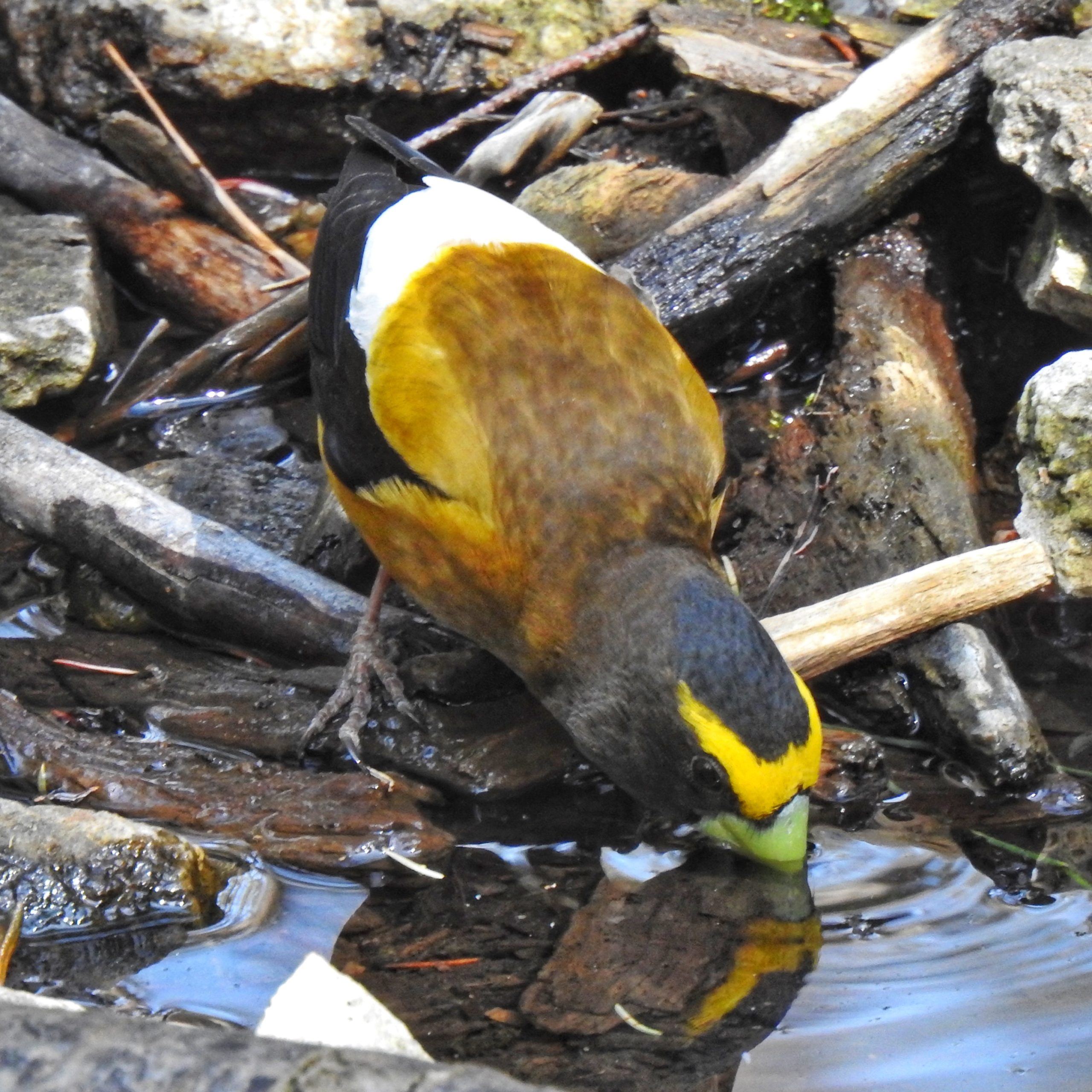 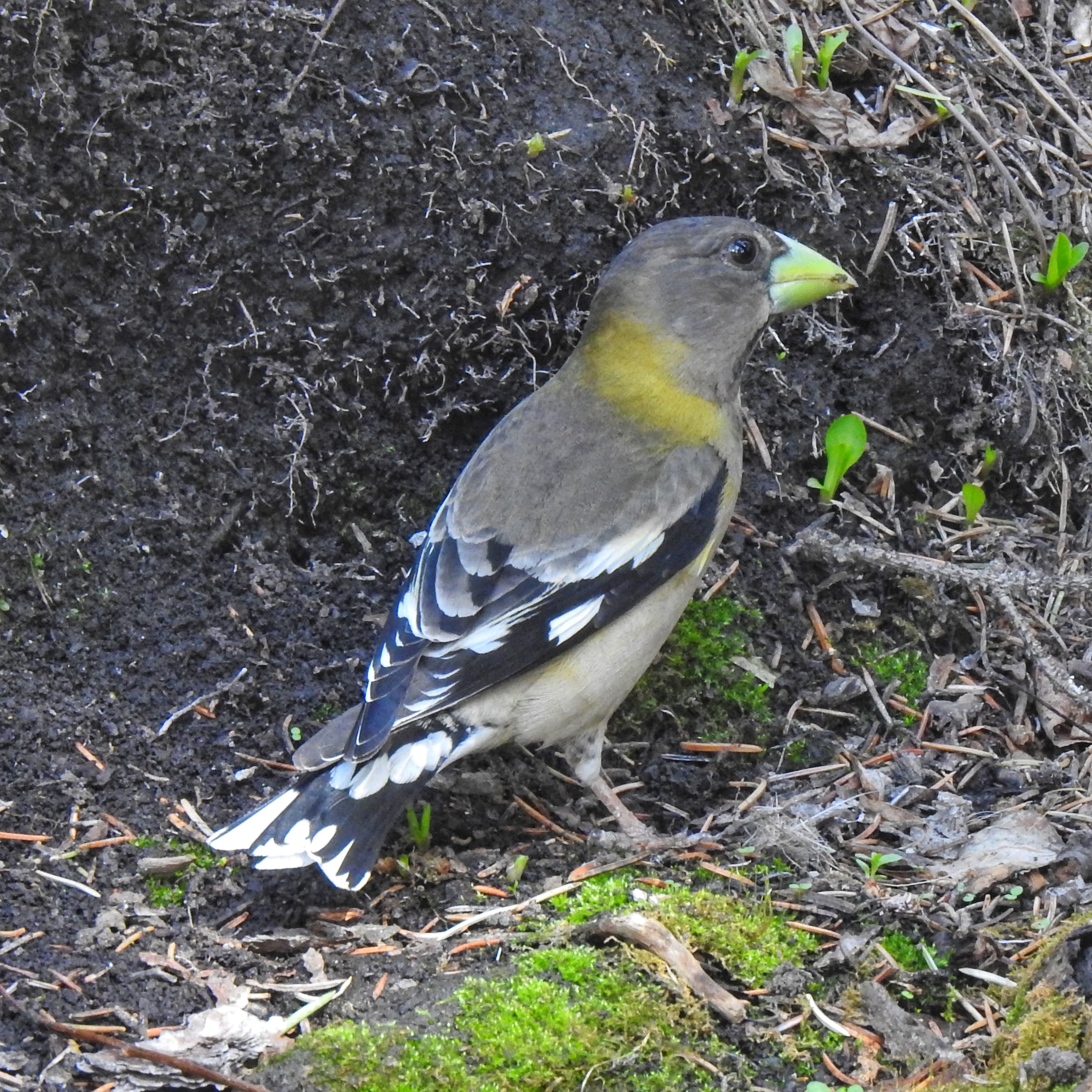 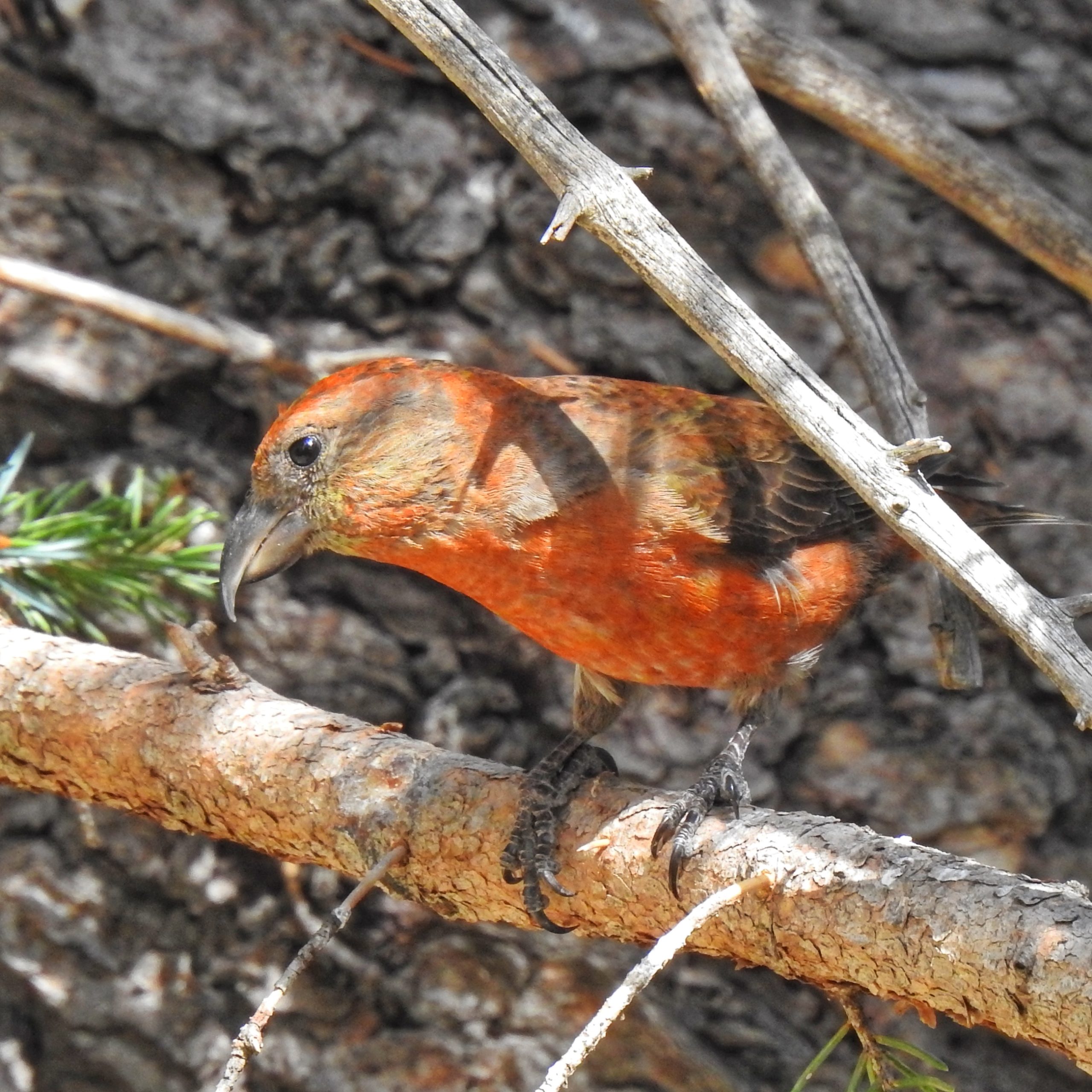 I’ve now seen Red Crossbills 11 times in my life, 7 of which have been in the last six months. From being an unusual sighting, this bird has suddenly become so common that I only occasionally bother to take photos.

As I was hiking back to my car, I scared up a Northern Mockingbird, a rare bird for that location.

I got home around 5:30 after a long, beautiful, glorious, fun, exciting day. I only saw 39 species, but many of them were among my favorites. Feeding the Canada Jays was a highlight, but there was a lot of other stuff to see. It makes a big difference when other people aren’t around to scare things off. I finished with 9.9 miles walked, all above 8,000 feet.