I’ve birded in short spurts since I’ve moved to Colorado, but this weekend was the first time I took a large chunk of a day just for birding.

I started at Fountain Creek Regional Park, the closest thing in the Colorado Springs area to mid-western habitat. With the recent rain and snow, it was a lot greener than the last time I visited. 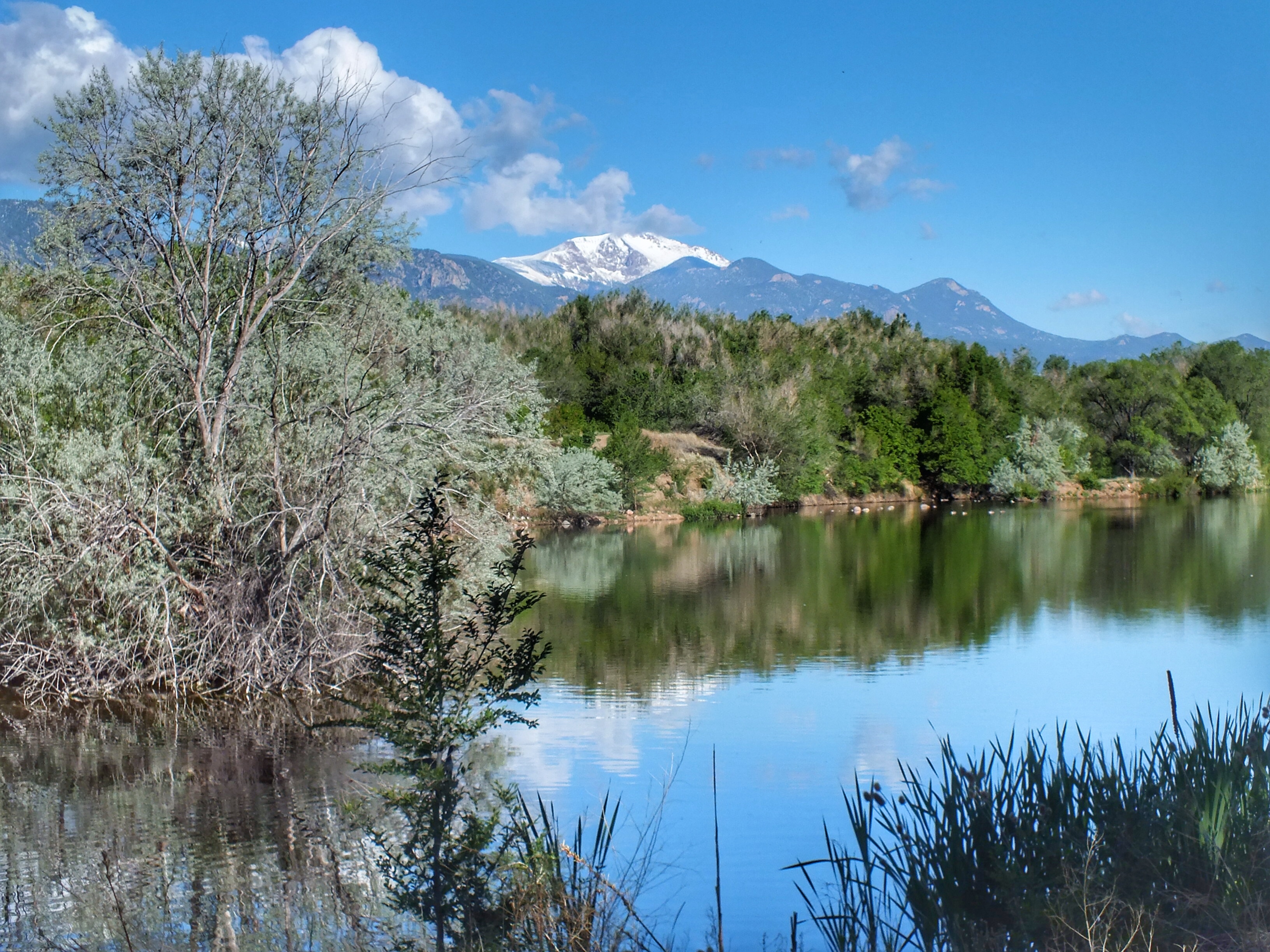 Soon after I arrived, I discovered a singing Bay-breasted Warbler. They’re fairly common in the Midwest, so while I wondered if it was common in Colorado, I didn’t think too much of it. There were a lot of birders at the park on this day, including a group from a national birding fest. Turns out the warbler was a big deal, and I didn’t pass a birder the rest of the time I was there without him telling me about it. 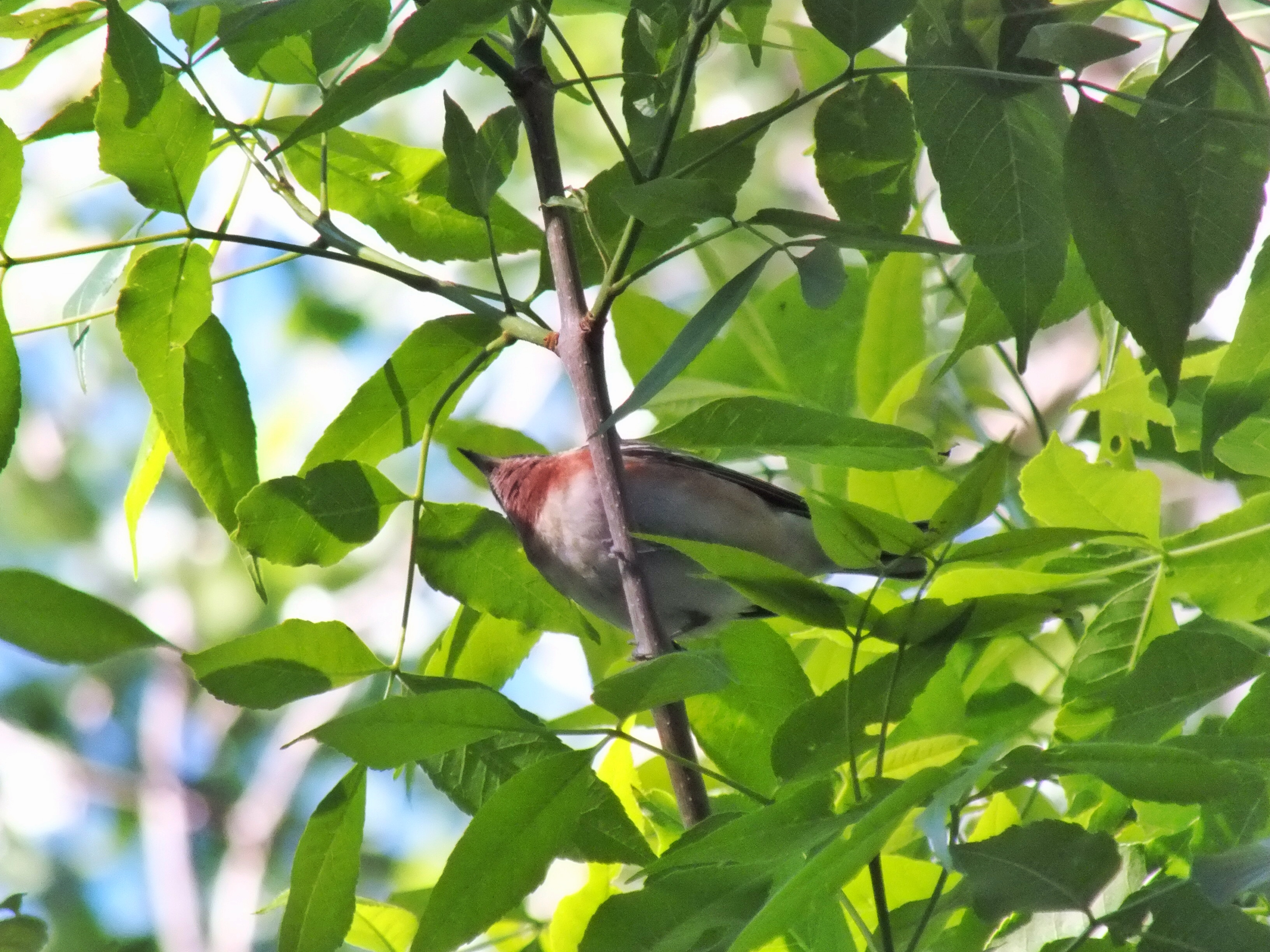 I saw about 40 birds in three hours, including Yellow, Wilson’s, Yellow-rumped, and Towsend’s Warblers (next post) and a Yellow-breasted Chat. 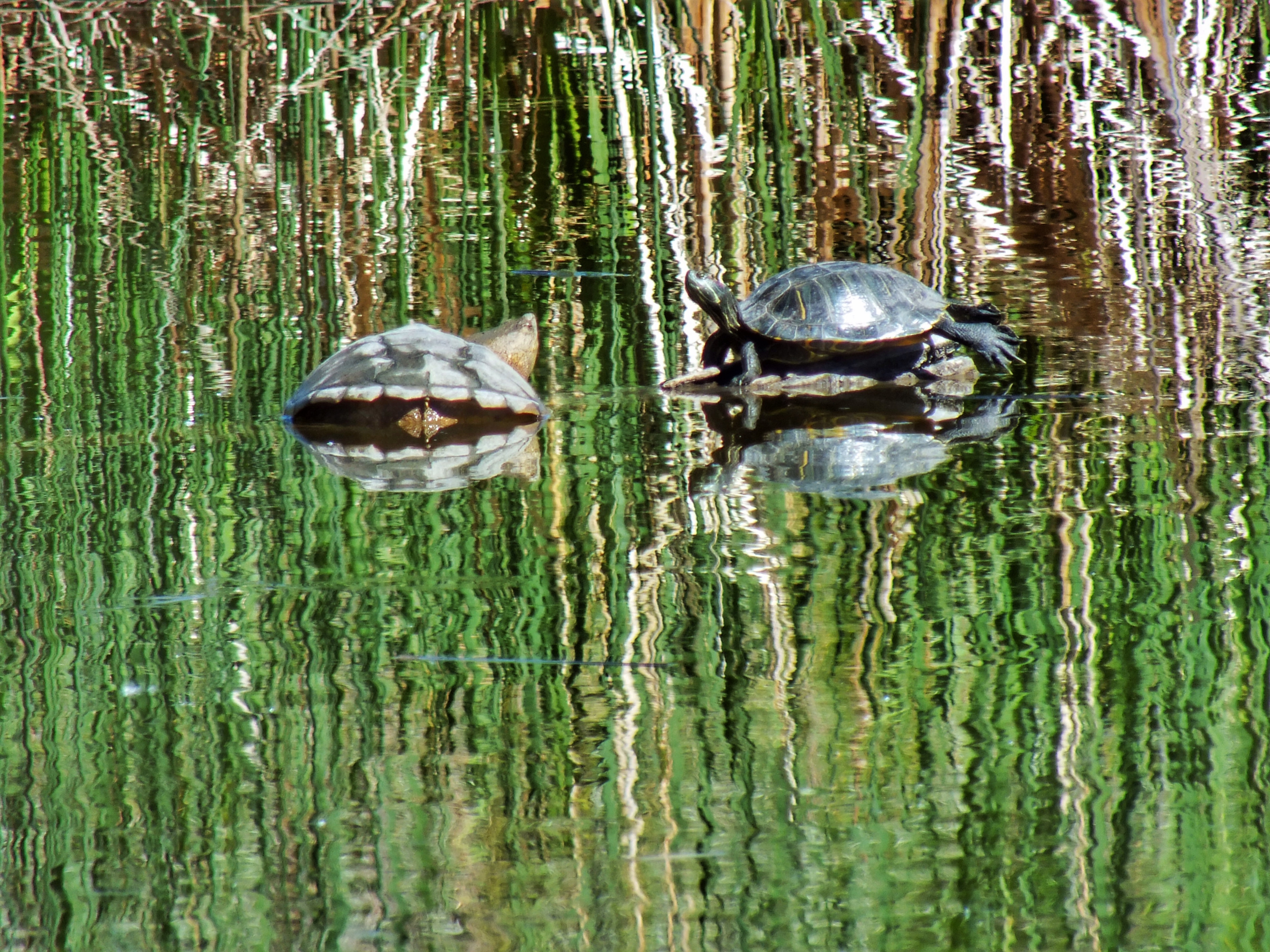 From Fountain I drove out to Calhan to Paint Mines Regional Park. A Sage Thrasher had been seen there recently, and that would be another lifer. Driving west on Route 24 near Falcon, I saw a silhouette in a roadside cottonwood. I made a quick U-turn and discovered a Great Horned Owl nest. 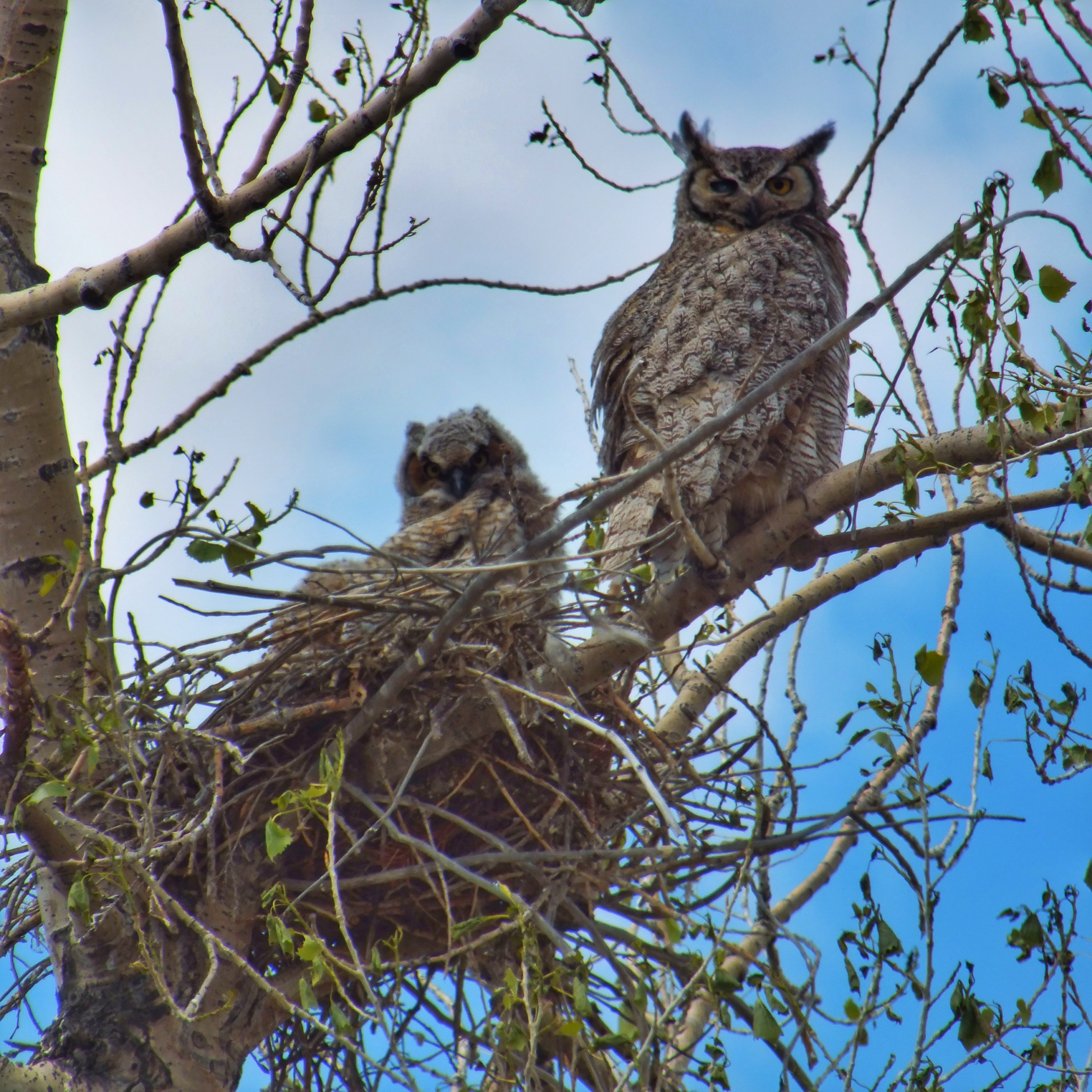 At Paint Mines, the parking lots and paint formations were packed, but there weren’t many people on the trails away from the formations. Or birds. I did see a Lark Bunting. I got no hint of a Sage Thrasher. Signs at the entrance say “absolutely no pets,” which, in Colorado, apparently makes it mandatory that you bring a dog. This park was also greener than on my last visit, although there was no water anywhere. 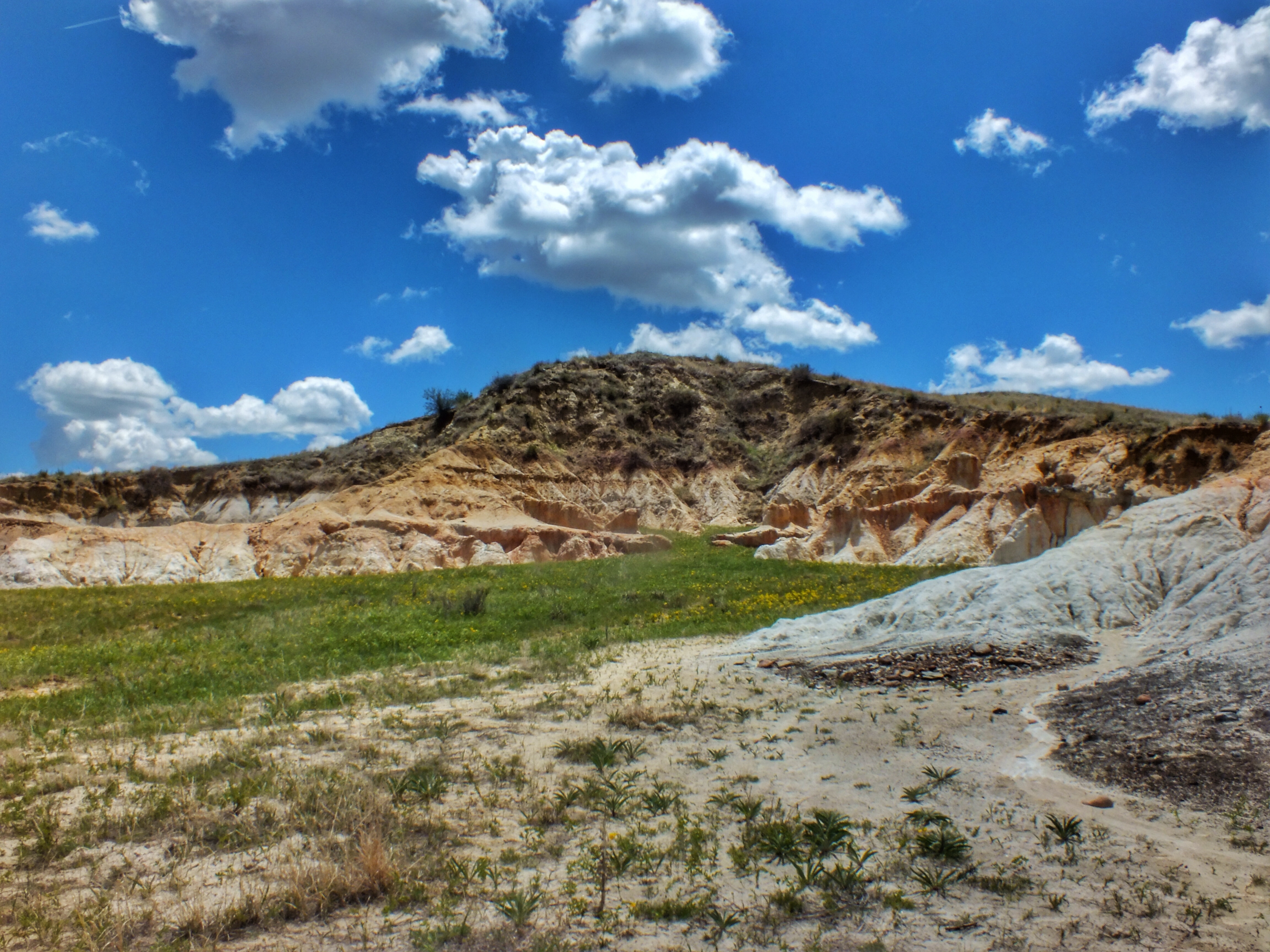 Here’s Pikes Peak from 40 miles to the east. I think the further from the mountain you get, the bigger it seems. 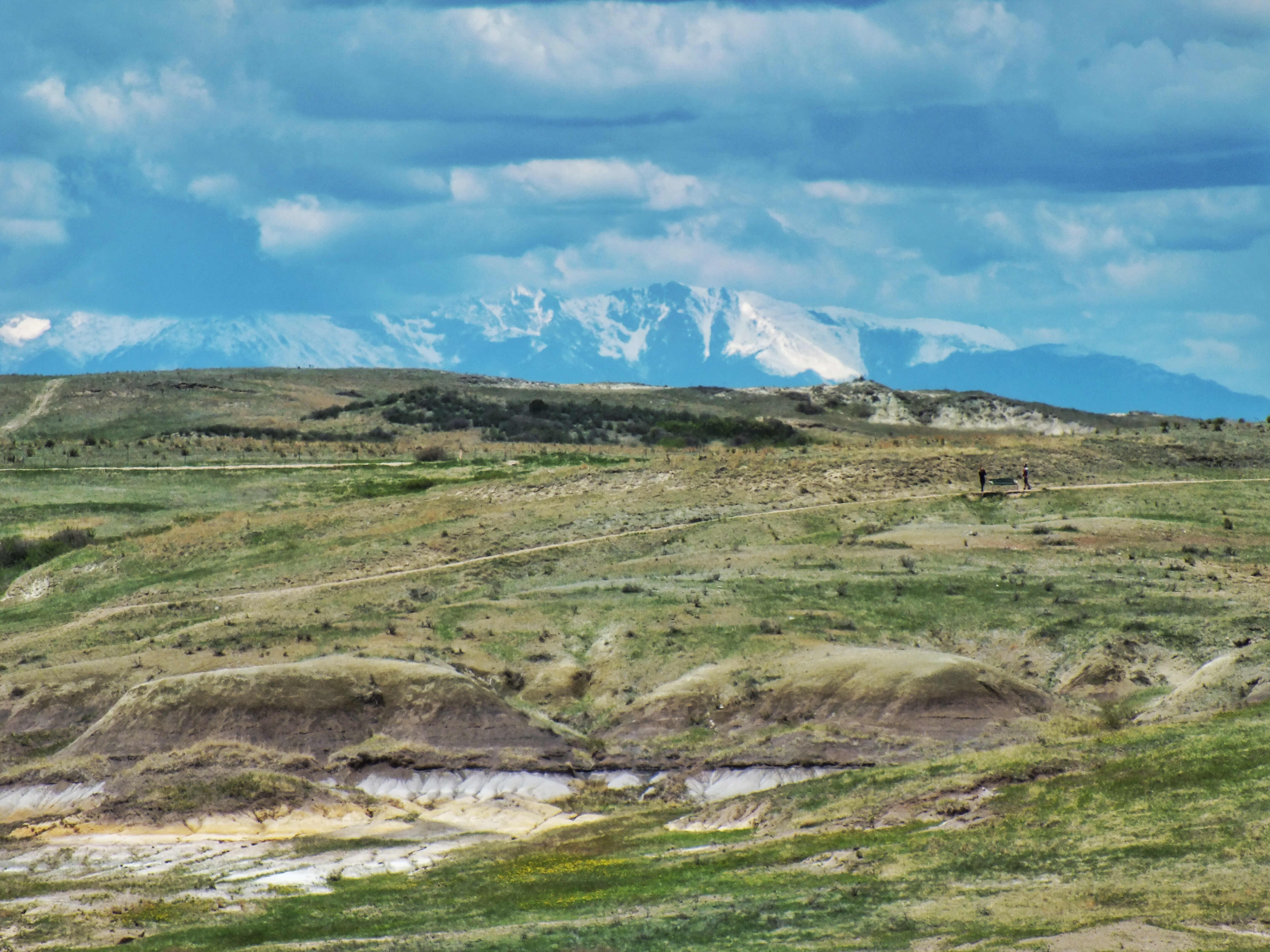 A strangely-tame Black-tailed Jackrabbit was foraging rapidly along the trail. It didn’t pay a lot of attention to me and, at one point, came within 15 feet. Suddenly a guy walked rudely up next to me and scared it away. He took some photos with a tiny point-and-shoot camera—I’m sure it was hard to find the animal in the photos. After it was gone, he turned to me and said, “You don’t see a lot of those around here, do you?” I said “sometimes.” I was tempted to say, “You don’t. I do.” 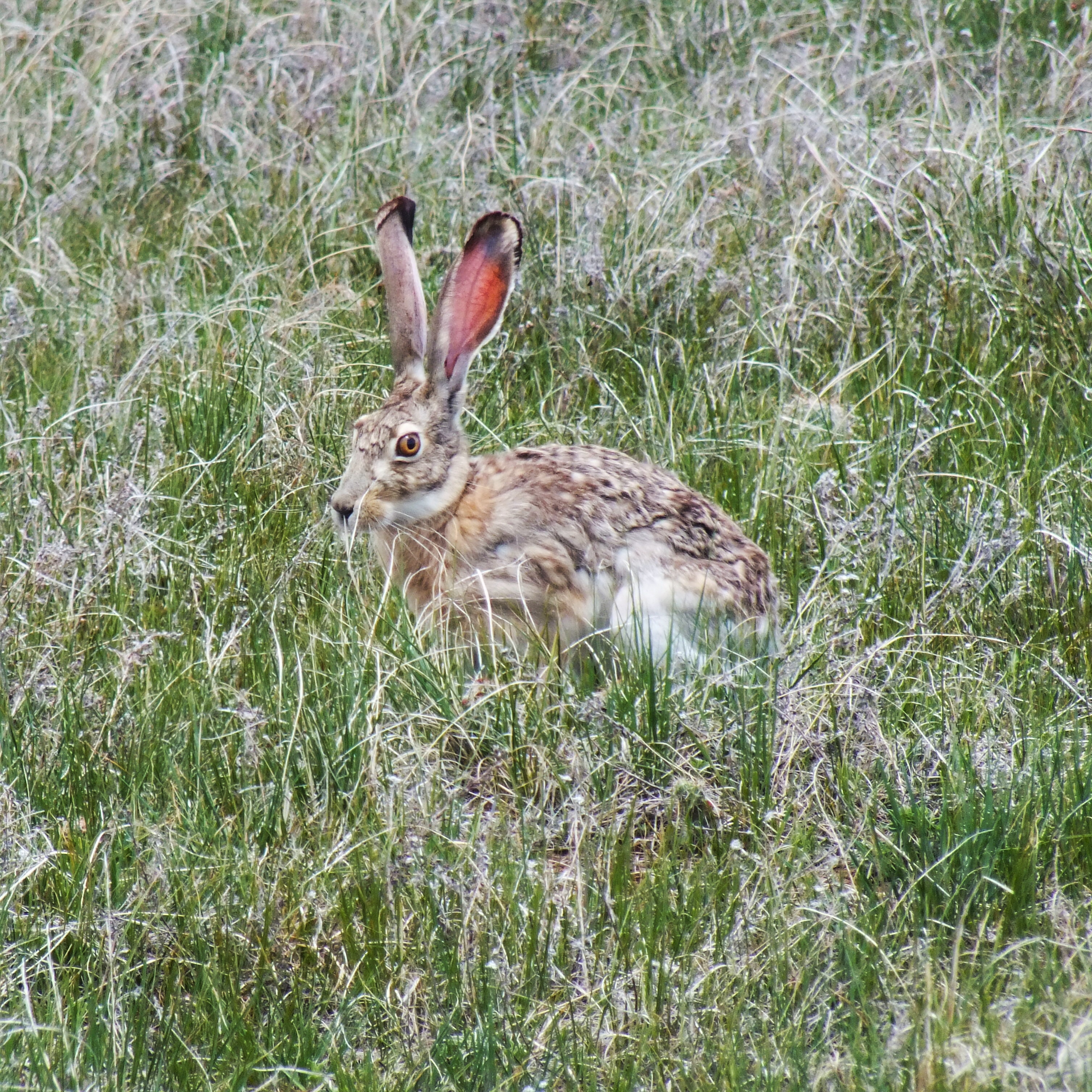 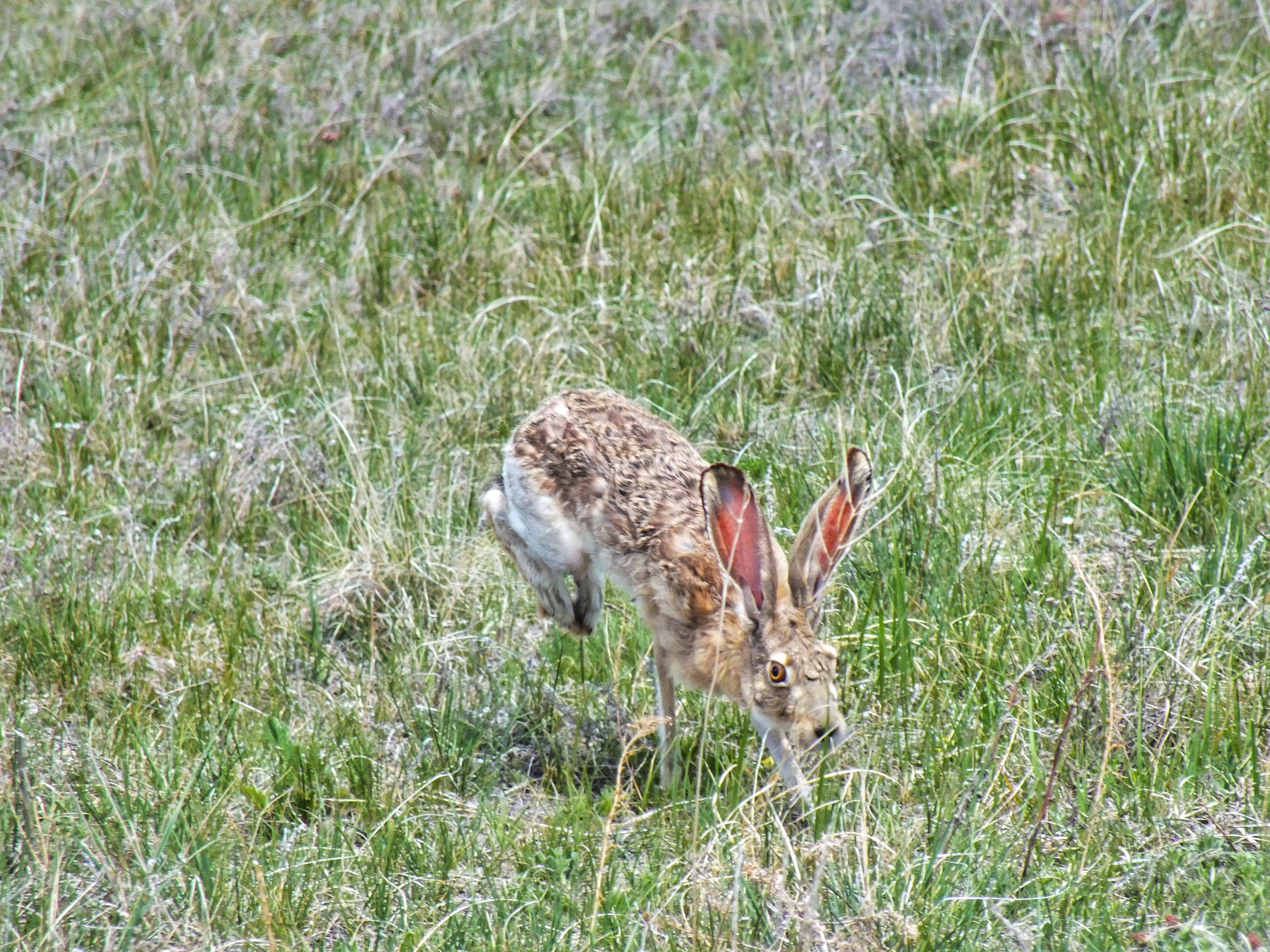 As long as I was in the area, I stopped at Ramah State Wildlife Area to see what was there. The duck and grebe numbers were down, but there were still several there of several species. About 20 Wilson’s Phalarope were wading and swimming around. The only extraordinary sighting was a flock of seven Red-necked Phalaropes. I guess they are fairly uncommon around here, but this weekend, people have been seeing them everywhere. 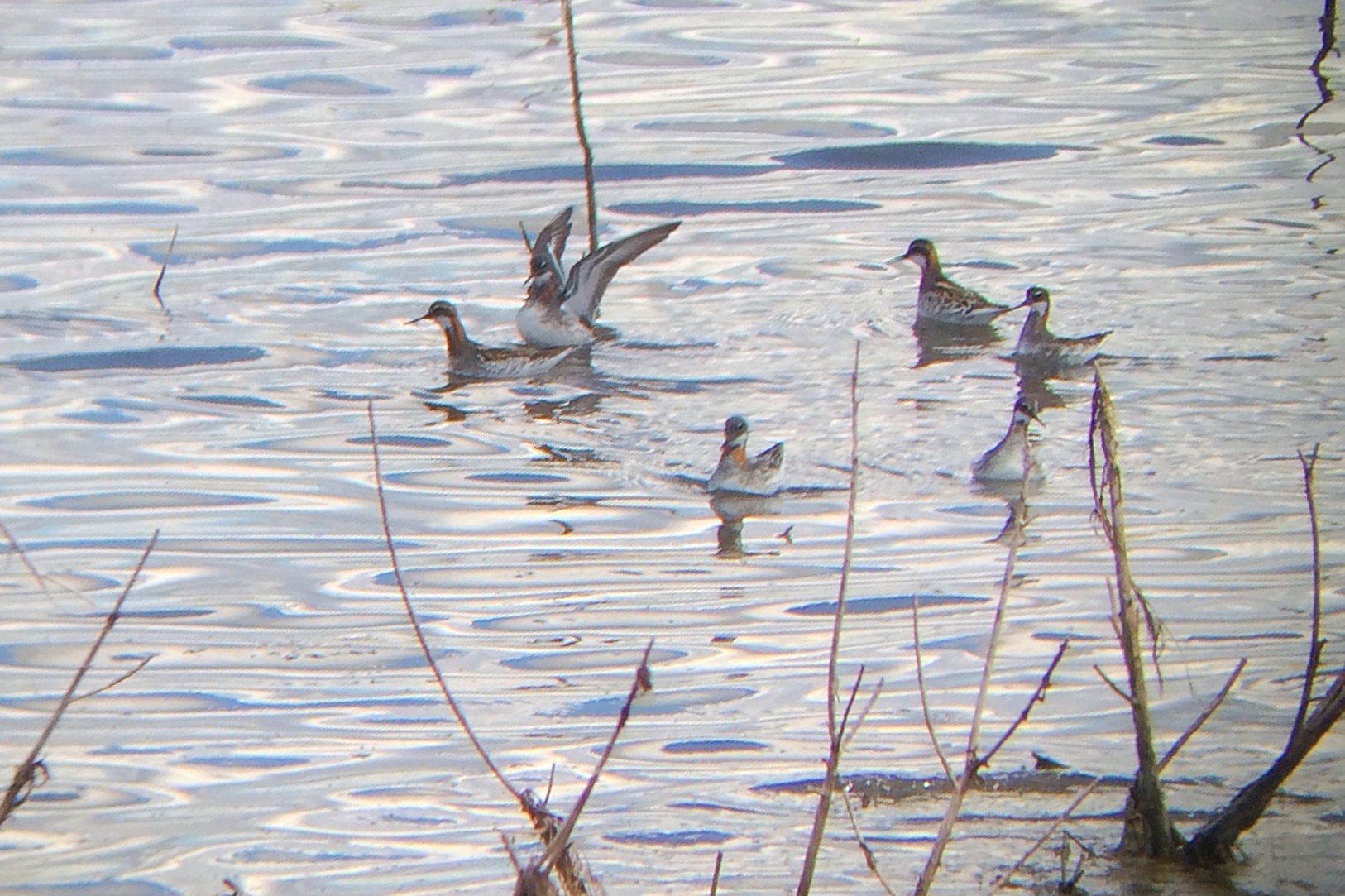 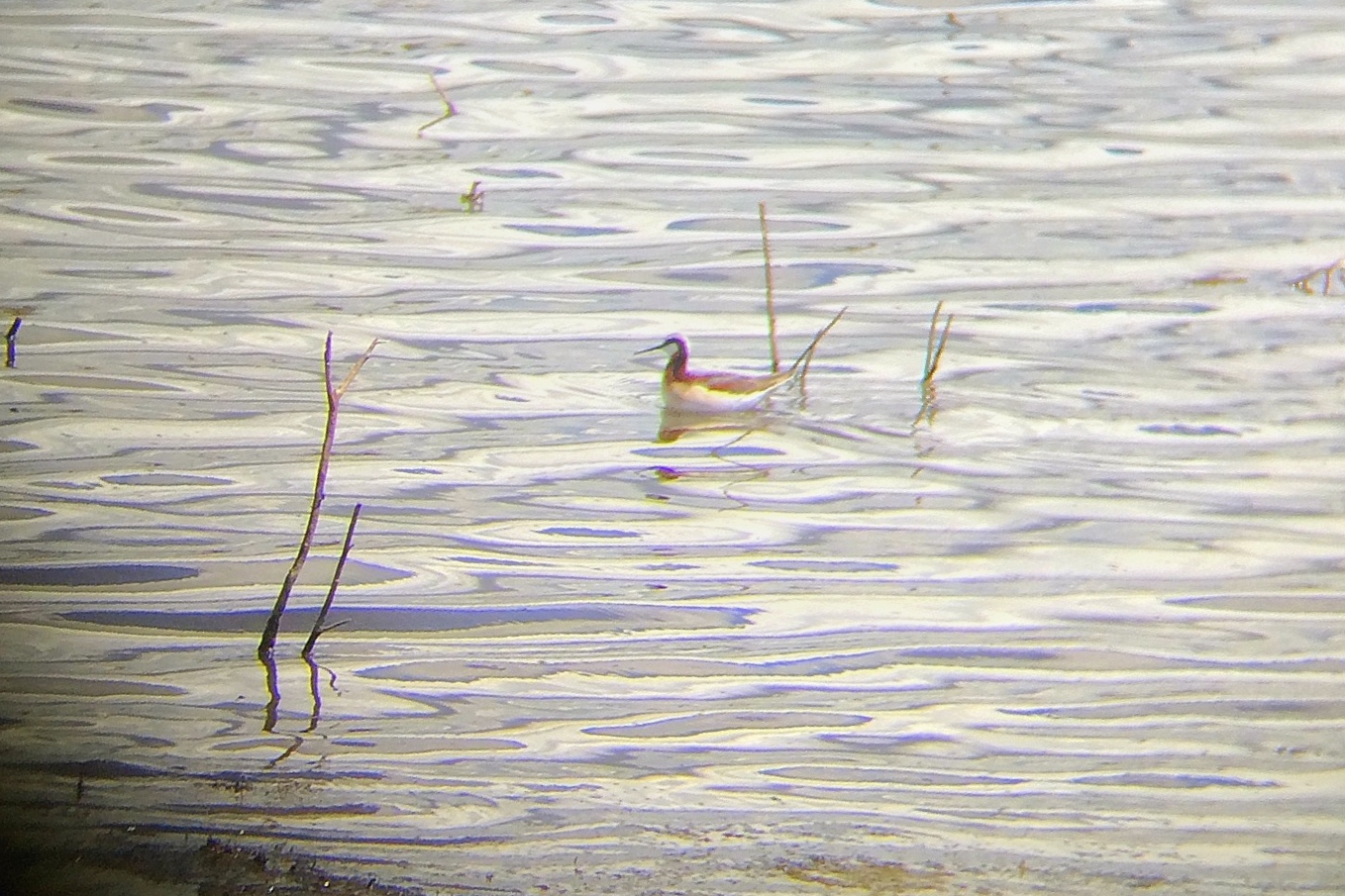