What made it seem even stranger that Sac City didn’t promote itself as “The Home of the World’s Largest Popcorn Ball” is that almost every other town we drove through made some plea for distinction. Here are just a few, photographed through my bug-splattered windshield while traveling at various speeds.

Early, Iowa — “Crossroads of the Nation” 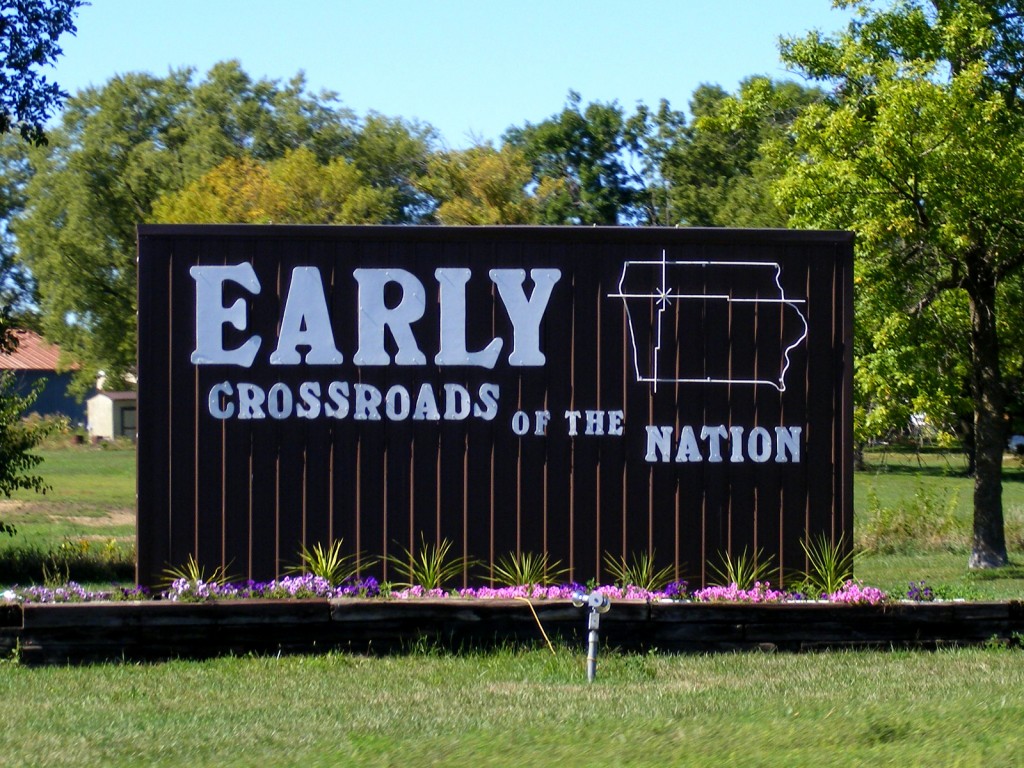 Named after an early settler, D.C. Early. The population at the last census was 557. It claims to be the crossroads because Routes 20 and 71 cross within the town limits — although they don’t really cross in Early but run through town on the same road. Route 20 extends coast to coast from Boston, Massachusetts to Newport, Oregon. Route 71 extends from the Canadian border in International Falls, Minnesota to southern Louisiana. So, if you’re looking at America from the perspective of those two highways, Early is the place where they (sorta) cross. 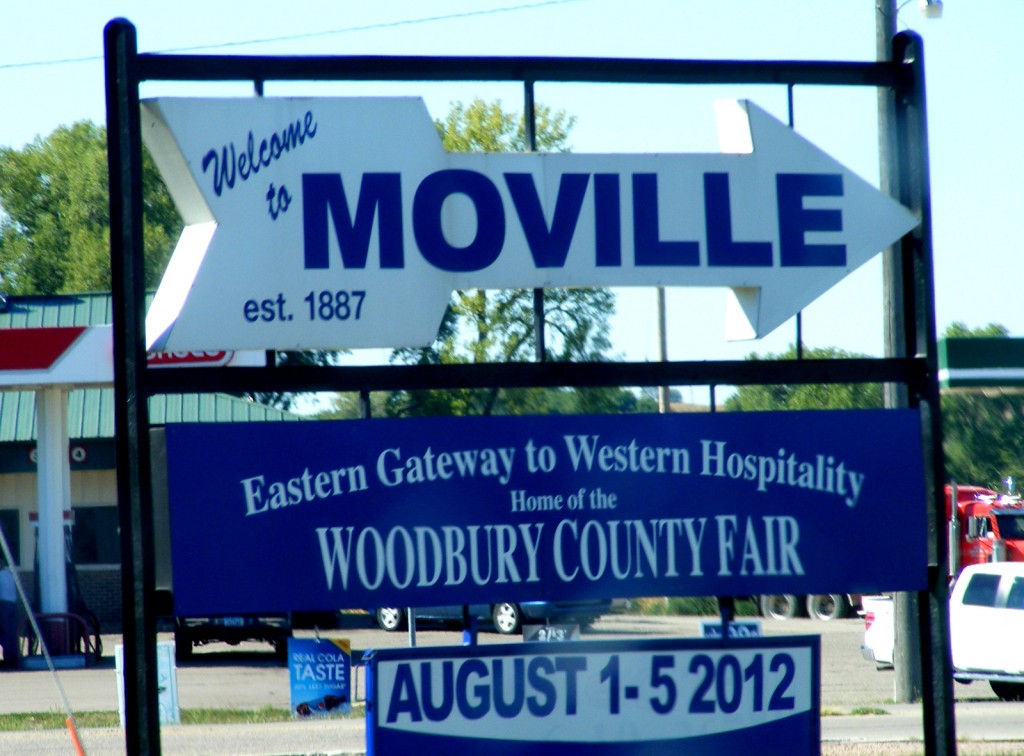 The town was named by John McDermott because the first post office was in his house and he could call it whatever he wanted to. He named it in honor of his birthplace, Moville, Ireland, although as is generally the case with Americans, the place in this country is named after a place in another country but pronounced wrong (MOE-ville, Iowa vs. muh-VAIL, Ireland). The population is 1,618. I couldn’t find any information about its slogan. 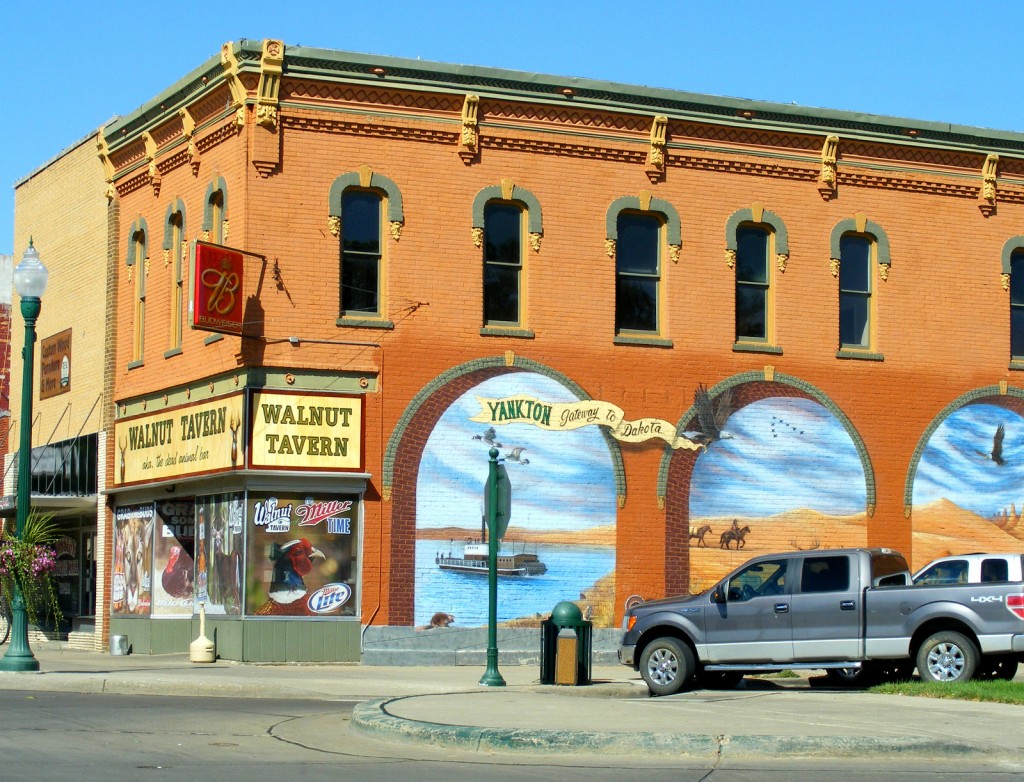 Yankton is named for the local tribe of Sioux Indians. It was the first territorial capital of the Dakota Territory and had its heyday as a steamboat stop on the Missouri River during the Black Hills gold rush. I’m guessing this is the origin of the town slogan, based on the mural painted on the side of the Walnut Tavern. The town also boasts South Dakota’s only drive-through bar.  (There’s a good idea.) The population is 14,454. 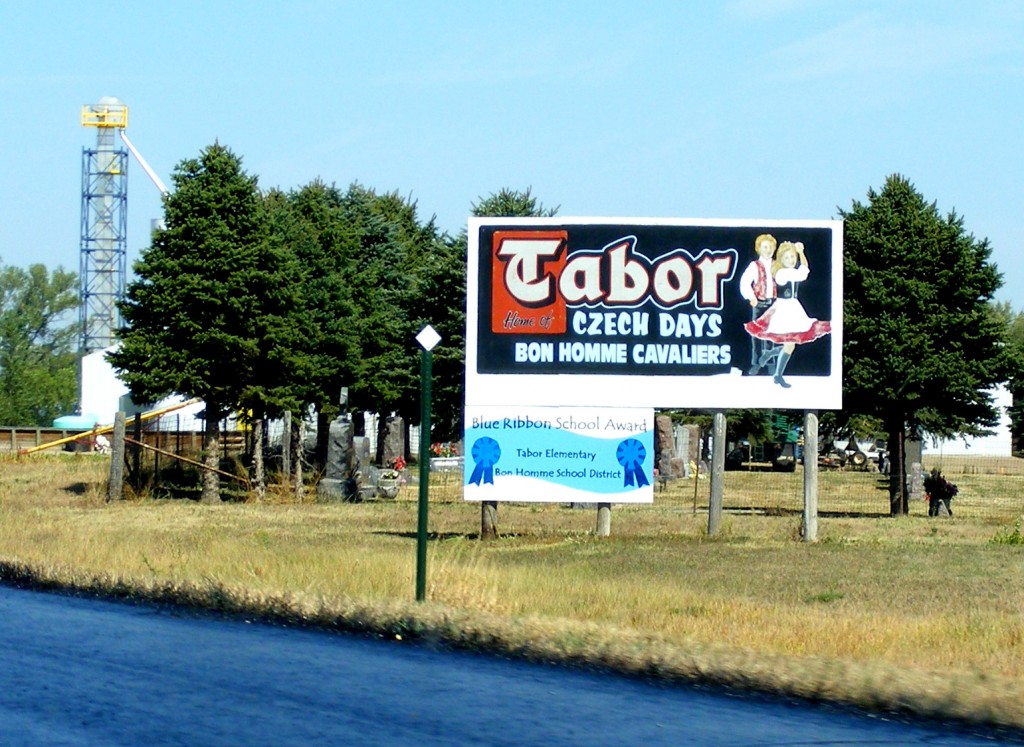 Tabor was settled by Czech immigrants around 1870. The town is named after a town in the Czech Republic which, in turn was named after Mount Tabor in the Bible. Almost all the residents were, and are, Catholic, and there is only one church for a population of 423. Czech Days occur in June and, according to the web page, “are synonymous with fun, music, entertainment, dancing, and traditional Czech foods.” 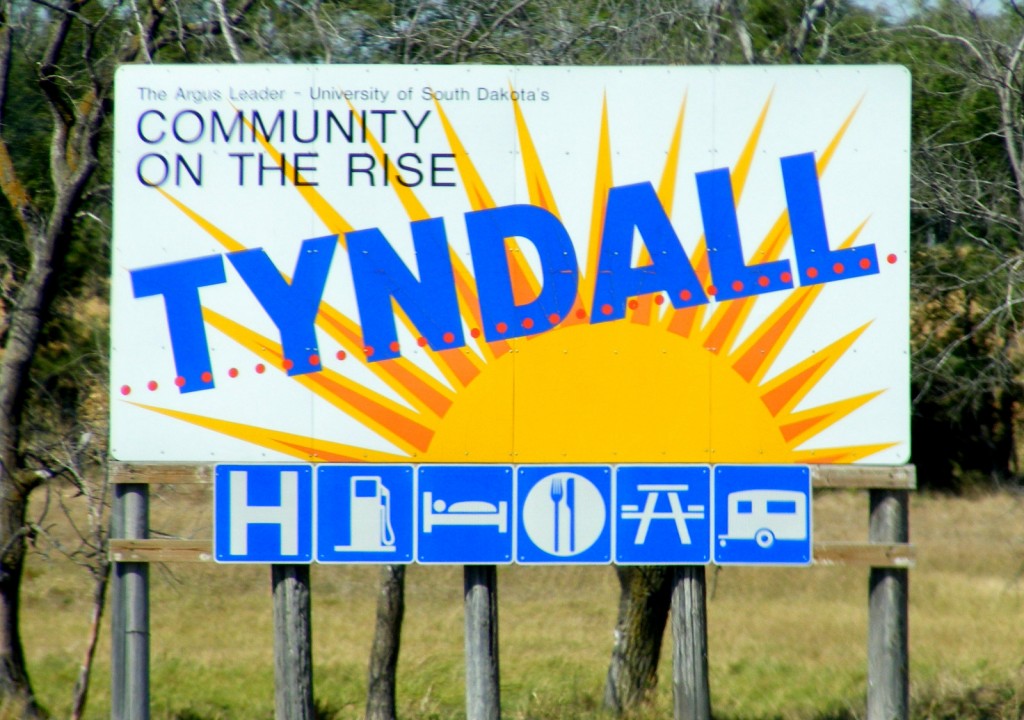 According to the town website, “Tyndall received its name from Oregon Richmond, the son of an early settler of Bon Homme. Oregon had studied to be a scientist and physician, and as a result of that study named the new town after John Tyndall, the British scientist, who had toured the U.S. in 1872. There is no other town in the United States with the same name.” The same site also states that the first building in the community was a freight office on the railroad and that the first shipment was a 100-pound box of rabbits. The town slogan came about because Tyndall was the first town in the Community on the Rise rural entrepreneurship program, co-sponsored by the Sioux Falls Argus Leader newspaper and the University of South Dakota Business School. The population is 1,365. 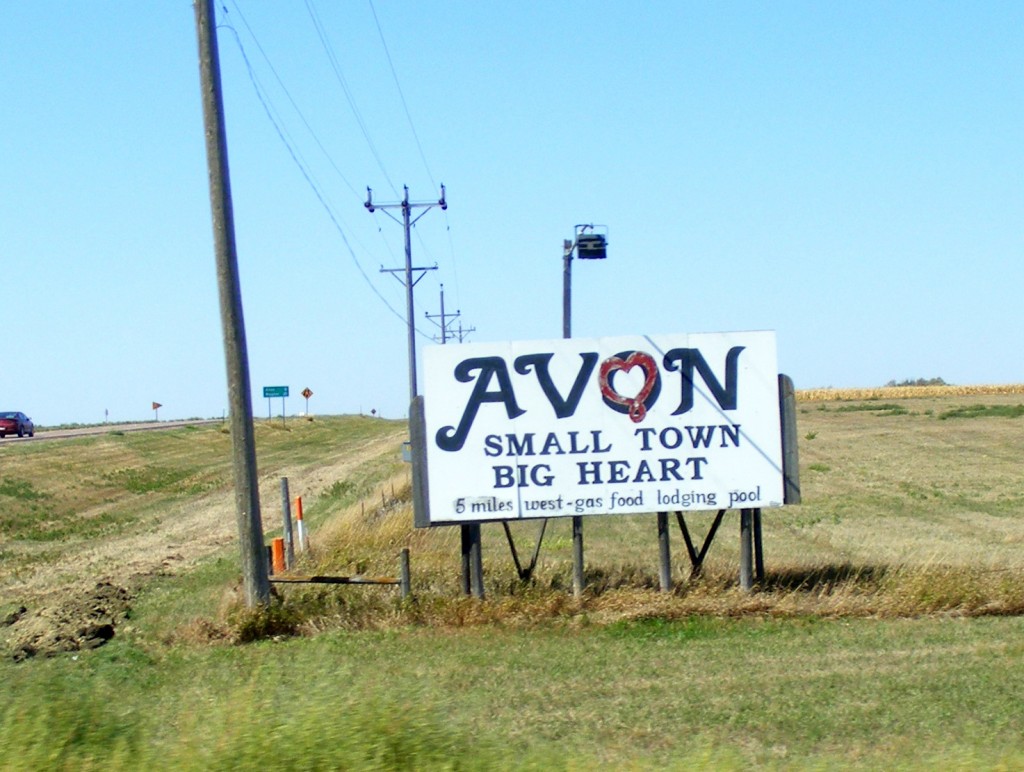 Like Moville, Avon was given its name by the first postmaster (who also ran the post office out of his house), although nobody knows whether he named it after a town in New York or after a river in England. Its primary claim to fame is that George McGovern was born there. The population is 590. 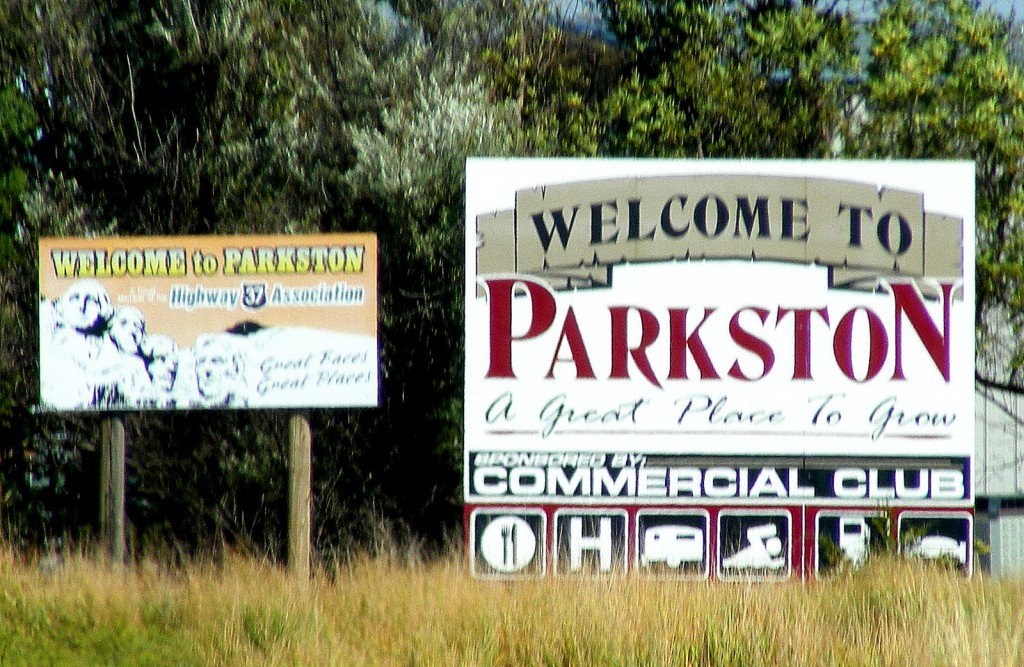 Parkston is named for R.S. Parke, an early landowner. The slogan is too dull to bother researching. The population is 1,508. 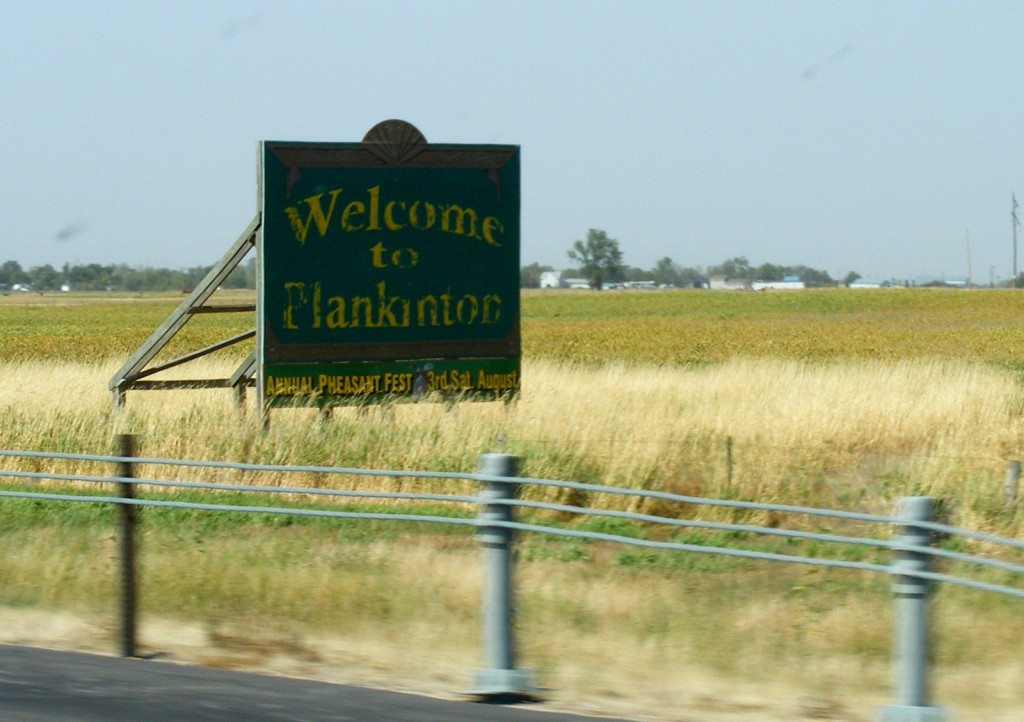 Plankinton was named for Milwaukee meat packer and hotel owner John Plankinton, a friend of Alexander Mitchell, the President of the Milwaukee Road railroad. According to the South Dakota tourism page, the Pheasant Fest includes “demolition derby, greased pig contest, candy toss, kiddie parade, progressive supper serving thousands of pheasant prepared by local business people, street dance with music.” Which is nice, because street dances without music are awkward and more than a little bit weird. The population is 707.

I saved my favorite for last.

(Sorry about the photo, but the sign itself was in pretty bad shape.) 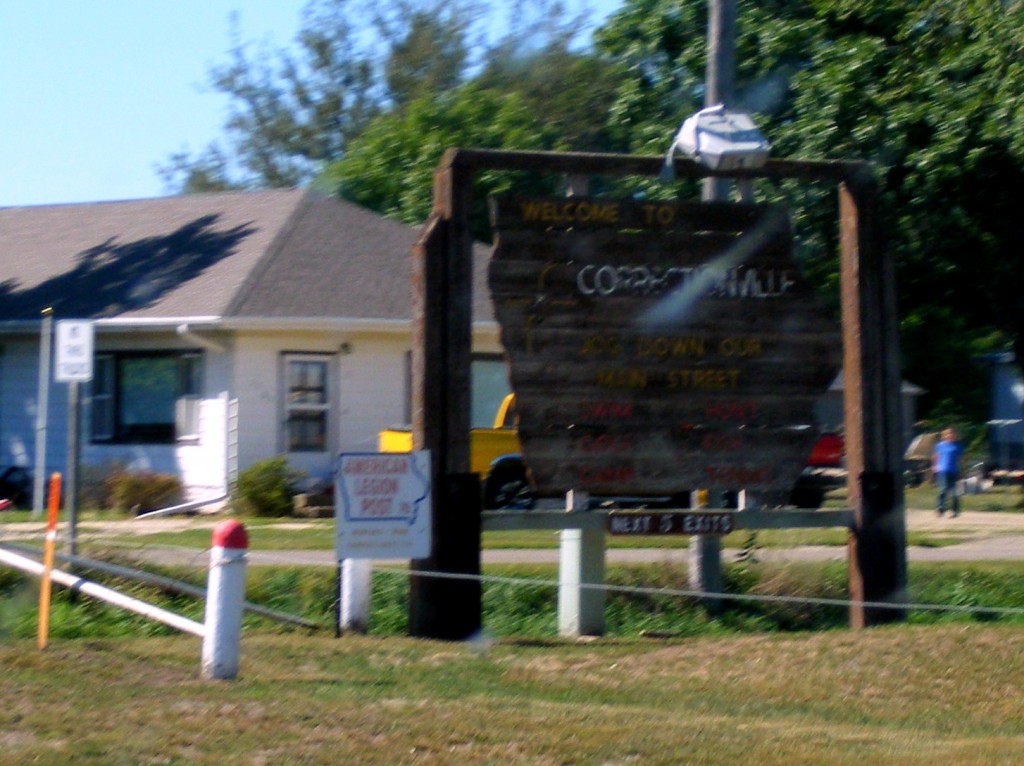 From the town website, “Surveyors, in making land divisions, used correction lines. Since the world is round, every land division from North to South cannot be the same size because the earth curves toward the top. To allow for this, East/West correction lines were established; adjustments were made along those lines to make all land parcels nearly equal in size. Correctionville — the city with the longest single name in Iowa — was named for the correction line which forms Fifth Street through the heart of the business district.” Which also accounts for the catchy slogan. It’s also the site of the third oldest brick schoolhouse in Iowa. The population is 821.

And while I’m on the subject, I think North Sioux City, South Dakota is one of the most euphonious town names I’ve ever heard.

This entry was posted in Signs. Bookmark the permalink.