Perseverance pays off. Our two previous attempts to see a Sky Sox game were unsuccessful—the first because of rain, the second because the field was in bad shape from rain the night before. As we walked out of the park after the second cancelled game, we were told our tickets were good two-for-one for any other game this season. I used one of them for another Friday night game so my wife could finally see her fireworks show.

The Tacoma Rainiers, the Triple A team of the Seattle Mariners, were in town. As we walked into the park, it all seemed so very familiar—complete with black clouds and rain. This time, however, there was no tarp on the field. 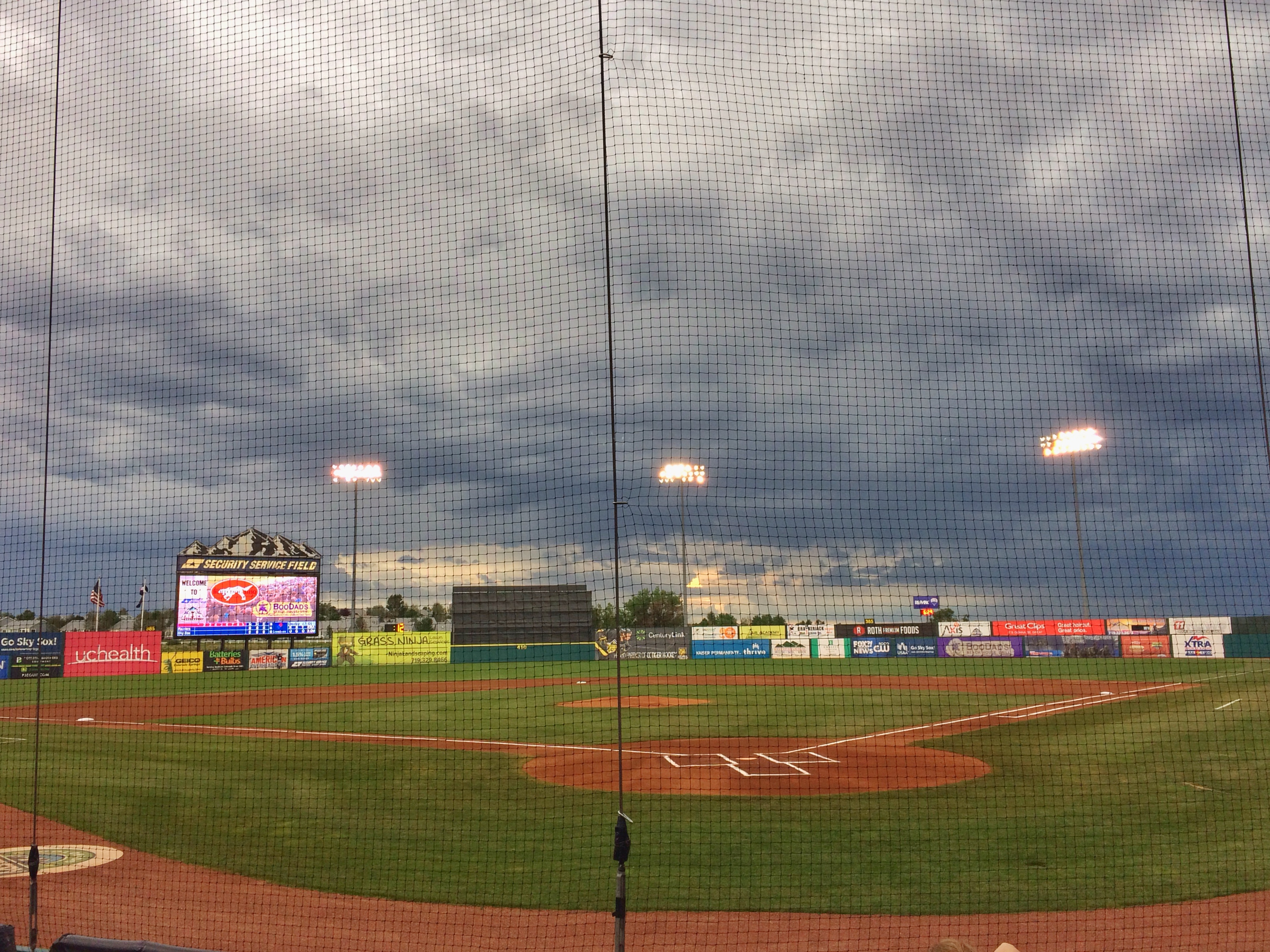 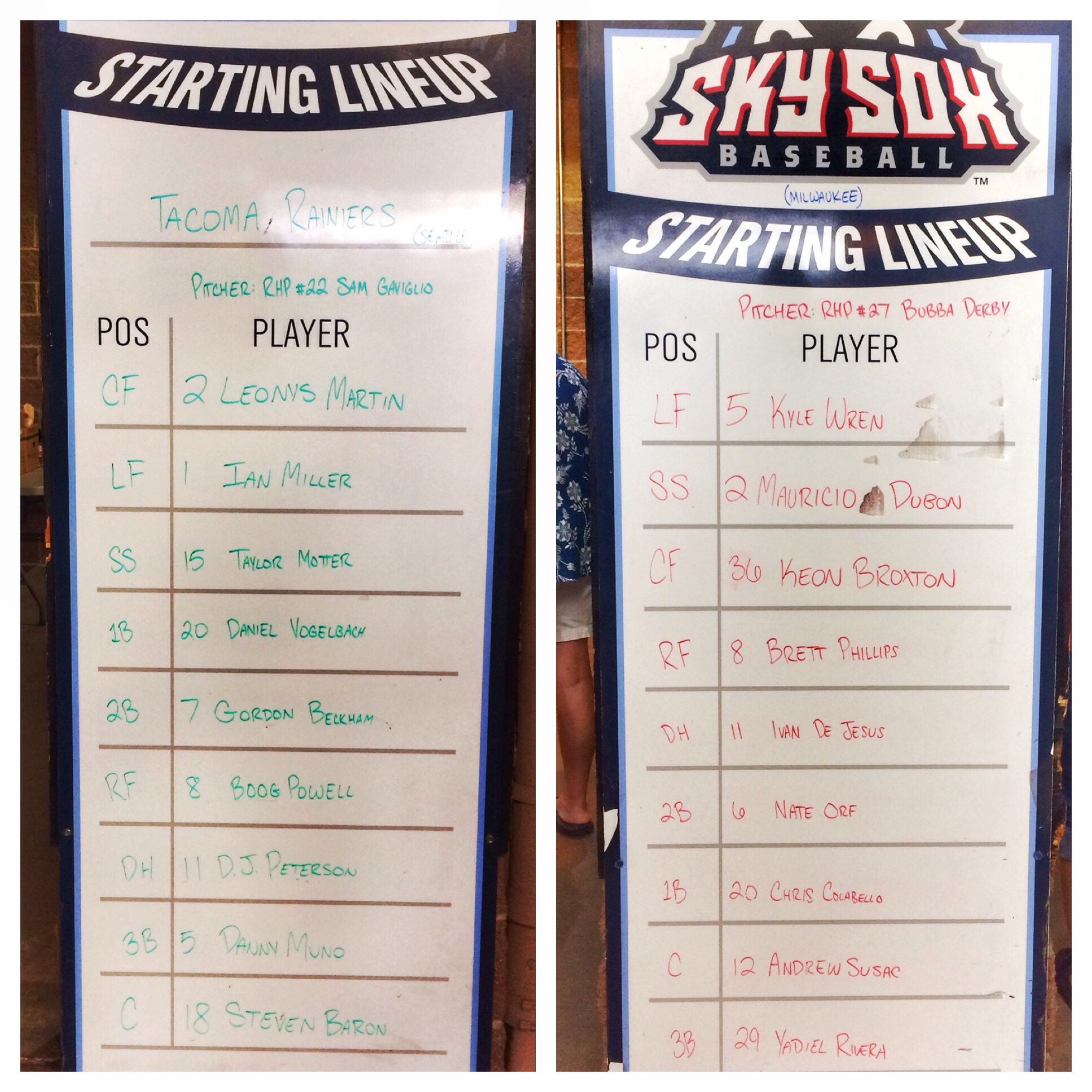 I noticed the name of the Rainiers right fielder, Boog Powell. I looked him up and discovered that he is no relation to the Boog Powell who played for Baltimore back in the ’60’s and ’70’s. I also discovered that he’s been suspended twice for taking illegal substances, which made me inclined to root for the Sky Sox. But that was difficult too, because they’re the Brewers’ farm team (and the Brewers were beating the Cubs at the very time we were watching this game).

There were other names I recognized. On Tacoma, Daniel Vogelbach was drafted by the Cubs before being traded to the Mariners for Mike Montgomery. Second baseman Gordon Beckham played for the White Sox for a couple years. For Colorado Springs, Keon Broxton has been up with Milwaukee, and Ivan De Jesus Jr. has played for the Dodgers, Red Sox, and Reds. His father, Ivan De Jesus, played for the Cubs. In total, of the 27 players who made it into the game, 18 of them have seen some Major League action (albeit, in a few cases, very brief).

Boog Powell hit a solo home run in the second (figures). The teams traded runs in the fourth. The Sky Sox scored thanks to a throwing error by the Tacoma third baseman who misplayed a grounder and then wildly tossed the ball into the first-base dugout. The Sky Sox returned the favor in the fifth when the pitcher fielded a bunt and threw the ball down the line into the bullpen, allowing the runner to get to second and later score.

Colorado Springs tied the game in the seventh on a home run by Andrew Susac and a couple of base hits. Nobody scored in the eighth or ninth. We were rooting for a quick ending by either team, and Tacoma obliged us when Gordon Beckham homered in the top of the 10th. The Rainiers won 4-3.

The level of play was impressive. Both starting pitchers had pretty good stuff. We saw some good hitting and good fielding. The throws were a little bit erratic now and again.

I forgot my camera, so all my photos look like this. This batter happens to be Gordon Beckham. 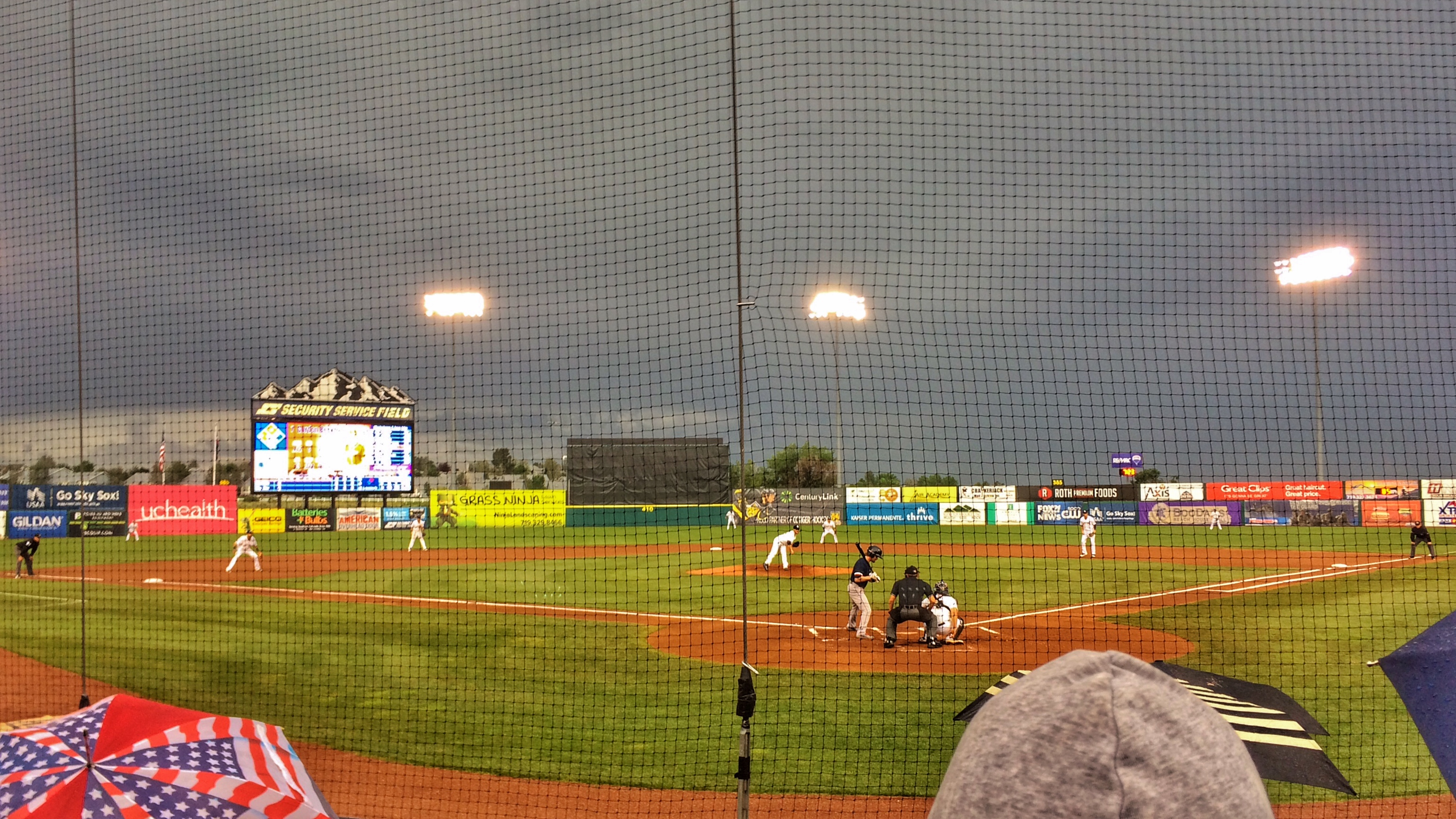 My wife was entertained by a young girl in the row in front of us who smiled easily and was a bit of a ham. 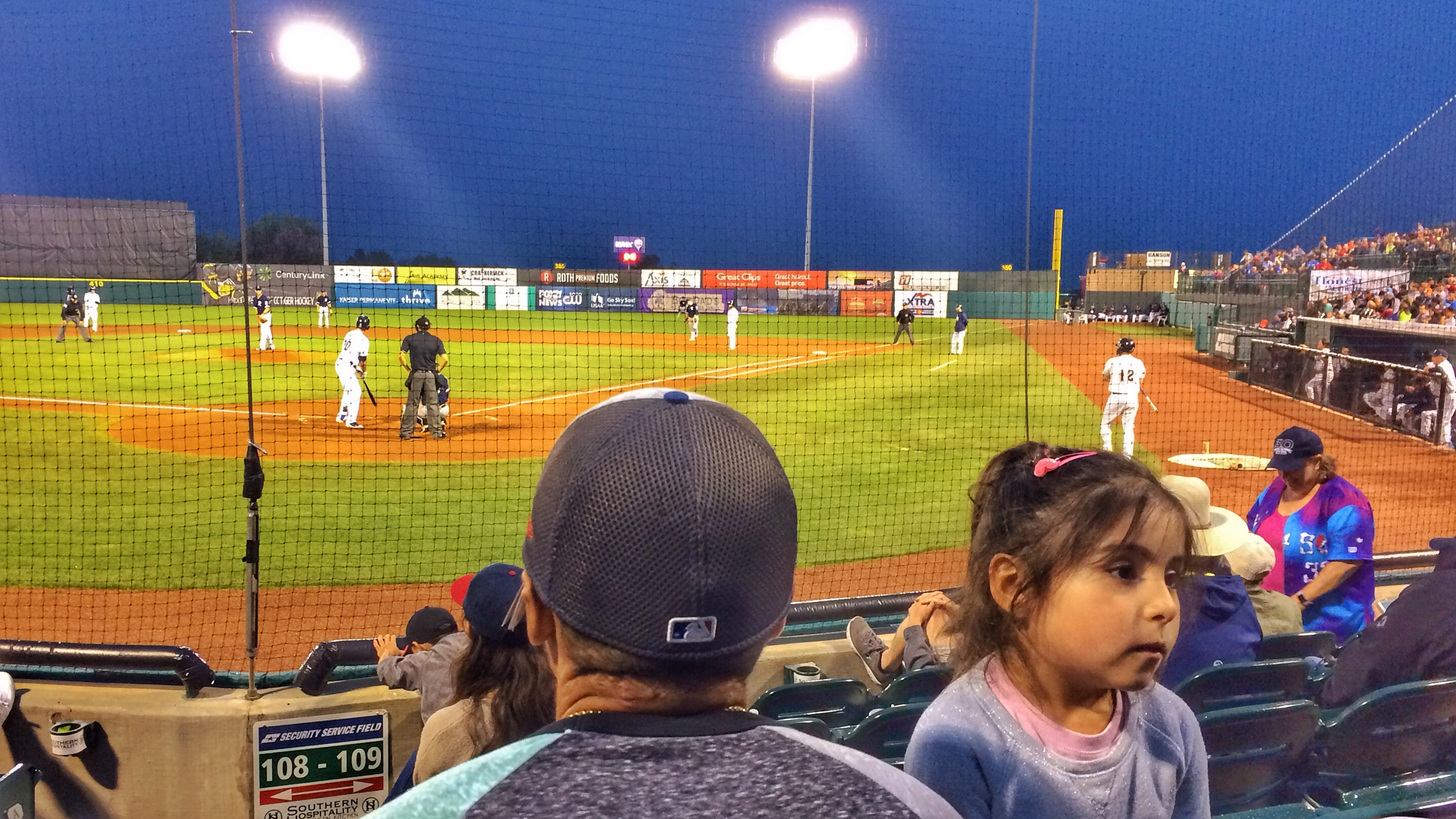 In the section to our left, three women watched the game without excitement. But I noticed that every time Mauricio Dubon came to bat, one of them would move down to a particular seat in the second row and stare out at the field. She didn’t cheer or smile or anything, but the one time, in the bottom of the seventh, when Dubon singled and drove in a run, she turned around to the other women and said, “See, it’s this seat.” Then she returned to her original spot. That’s her in the gray sweatshirt with her eyes closed. .

The car on the field was done up like Doc Hudson from Pixar’s Cars. I asked my wife if it was the real car from the cartoon. She’s not that dumb. 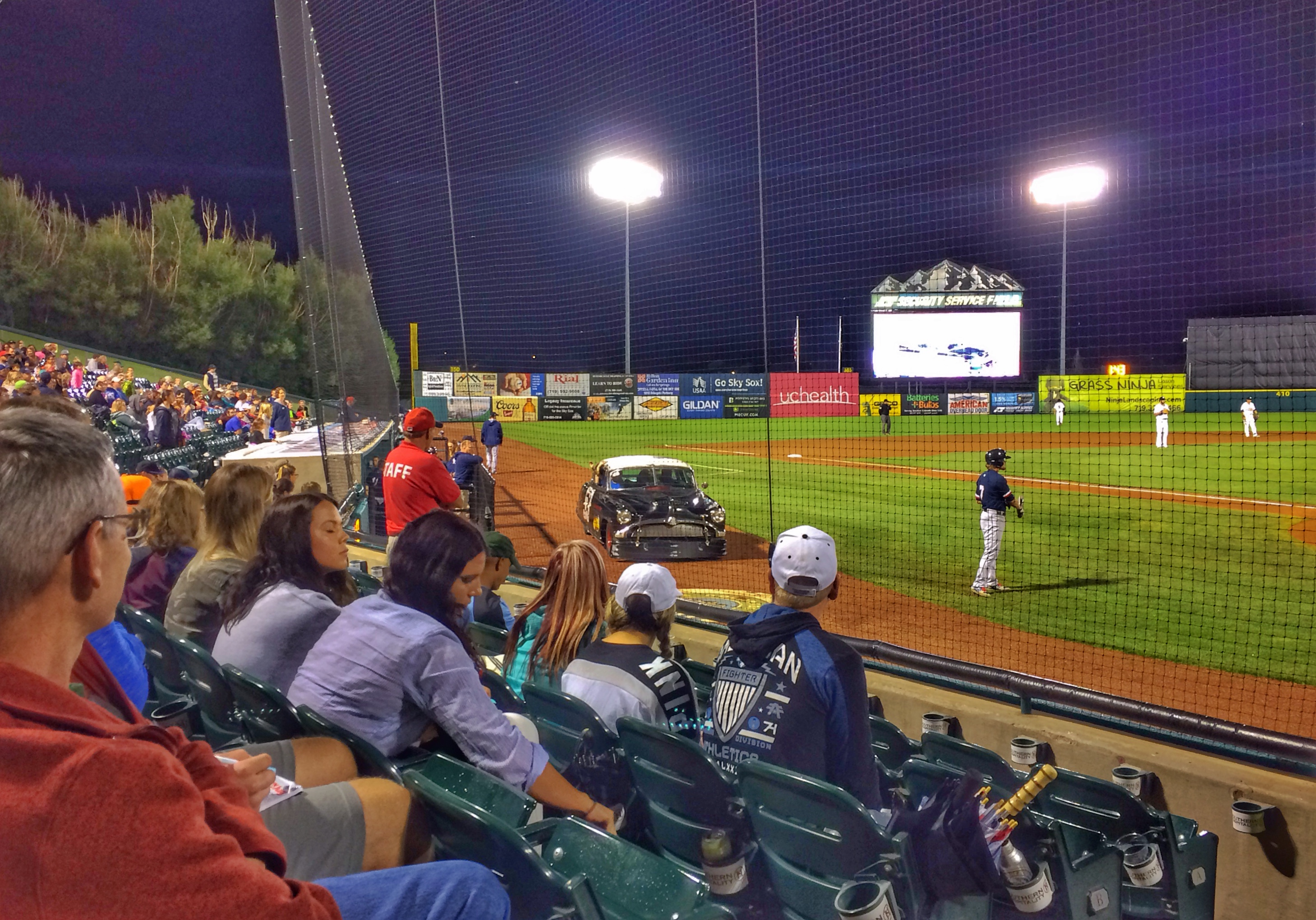 The big excitement came in the seventh when I caught one of the bags of sunflower seeds being tossed into the crowd by the ushers. I had two and decided they were too much work for the effort. My wife enjoyed them. 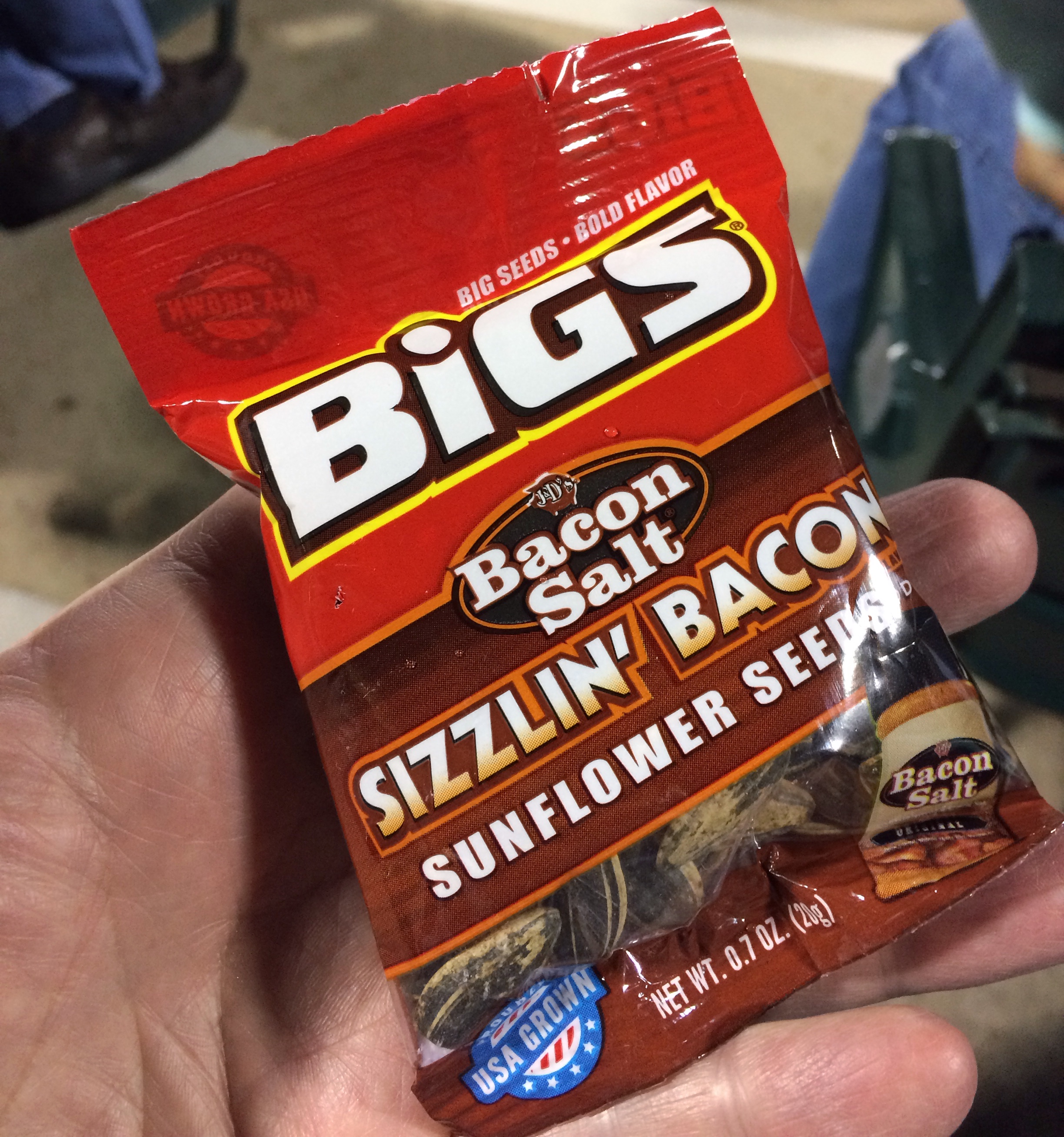 There were plenty of empty seats in the park, but we were fortunate enough to have a family of three sit behind us. They showed up in the third inning, left after the fourth, then came back in the eighth for the rest of the game. The daughter (I think) was about 10 and had a deep voice. She clocked me in the head with her elbow when she first arrived. She was eating chili-cheese fries while her mother berated her for the mess she was going to make. The girl didn’t take this, or anything else her mother said, seriously, and for good reason. When her mom wasn’t swearing at her, she was trying to be her best friend with a non-stop banter that she thought was very clever. For example, she thought it was hilarious that she kept referring to Sky Sox player Kyle Wren as Kylo Ren. When she wasn’t being clever, she was insulting her boyfriend, telling him to shut up or to stop eating with hot dog in his mouth. I know it was her boyfriend because she talked about after they “got hitched.” I wanted to turn around and tell the guy that there’s no way the marriage would last. If she treated him like this before they were married, just wait. But I didn’t. The guy was wearing several gallons of cologne, which gave me a headache and made my wife’s nose run. He kept singing along (with food in his mouth) to the songs that played over the speakers and explaining things about baseball (usually incorrectly).

We moved up to the top of the grandstands for the post-game fireworks. The show was short but nice, and much better than the daytime show we saw the first time we were at the  park.