I spent the afternoon alternating between wandering about and sitting in the auction barn watching the auctioneer sell cattle, pigs and sheep. The highest price for beef (while I was in the barn) was $5.10/lb. The champion hog went for $30/lb.

The animals were all shown by kids between about 8 and 20. I saw one small girl, perhaps about 13, whom I thought was very courageous. She dragged in a steer that was at least 16 times heavier than she was. Just as she got it onto the floor, it tossed its head and smacked her right across the face. She didn’t flinch, but went about yanking the stubborn animal back and forth. It was only as she was leaving the floor after the animal had sold that she put her hand up to her face and wiped away a tear. 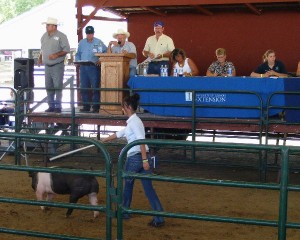 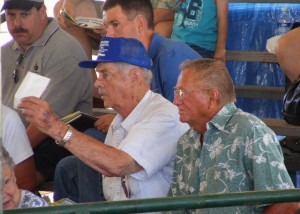 Later in the afternoon there was another auctioneer at the podium. He spoke even faster and was less understandable.