All season long, I’ve seen posts from friends who were at Wrigley Field watching the Cubs and, frankly, I’ve been jealous. Why them and not me? And then I found $30 left over from a birthday present and I hatched a plan. I visited StubHub and found tickets for $30 in the upper deck by the infield for  a game on the very next Tuesday night. (It had to be a sign, right?) It didn’t take me long to convince a friend to go along.

Tickets in hand, the next question was how to get there. On weekday night games, parking isn’t allowed within 412 miles of the field unless you pay with a major body organ. We opted for the Wrigley Express from Woodfield.

This being Illinois, the system they have in place there is odd. The website says the buses leave at 4:30. I got there at 3:30 and there was already a line. At 3:45, buses began loading and taking off. By 4:00, four of the six were gone. My friend arrived about then and we took the final two seats on bus five, far in the back with no leg room to speak of.

And then we sat until 4:30 so they could load all the late-comers onto our bus and bus #6 where they packed into the aisle. Two young men were standing close to the back door. For the next hour and a half, as we sat in traffic on the Kennedy Expressway, we heard a constant plea from the intercom — “Please move away from the doors.” Every time the message repeated, one of the young men would look up at the top of the door and then … stay right where he was.

We finally arrived at 6:15, about 45 minutes before game time. Our seats were high up in the upper deck right next to the press box. It was a hot, muggy day, and we felt very little breeze, but the view was great. We could see a slice of Lake Michigan way off to our right. 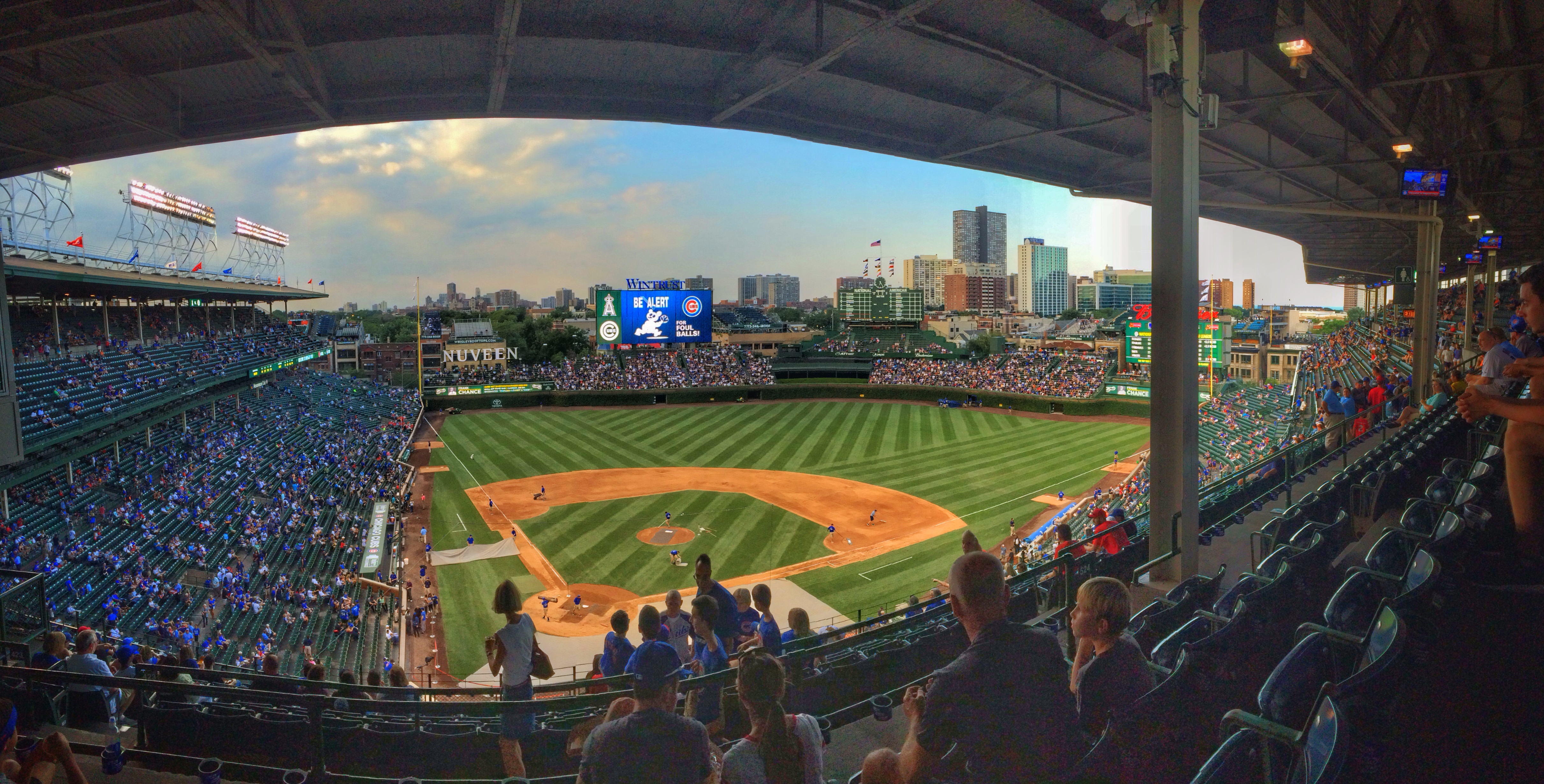 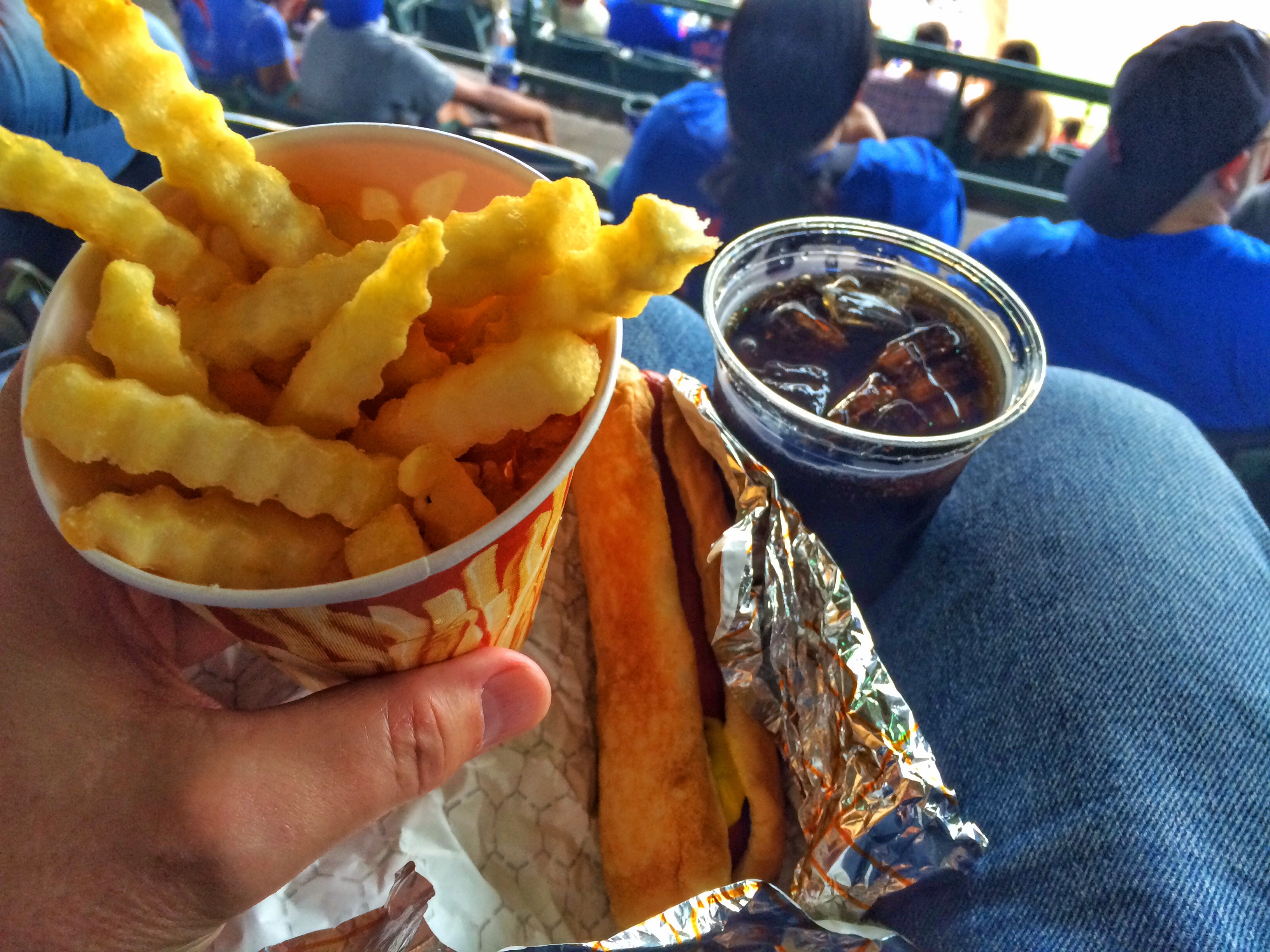 I didn’t leave my seat again. Because I only had my cellphone, all the rest of my photos will look remarkably similar.

Willson Contreras on his way home after his game-tying blast in the third. 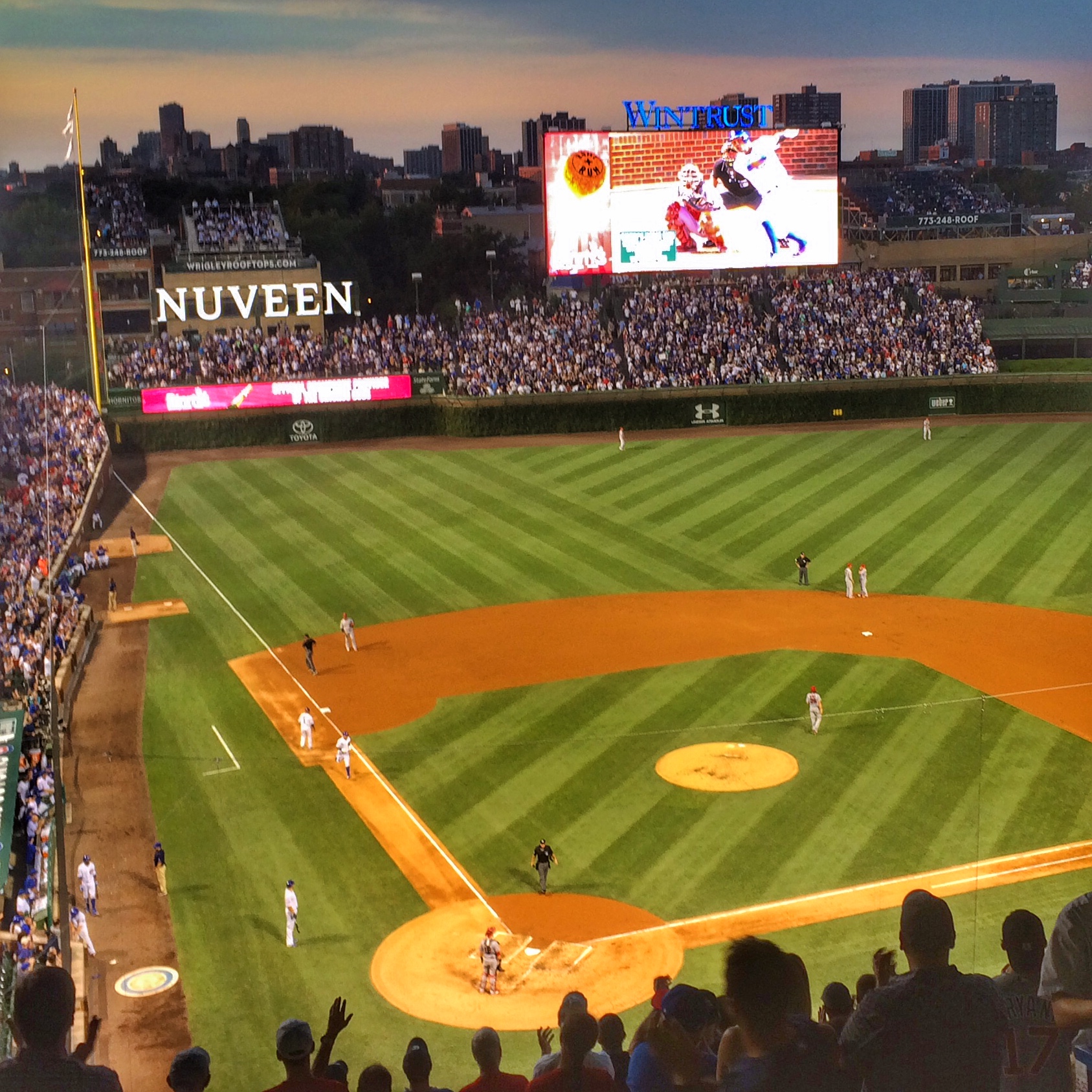 Chris Bryant rounding third after his monster shot onto Waveland in the fifth. 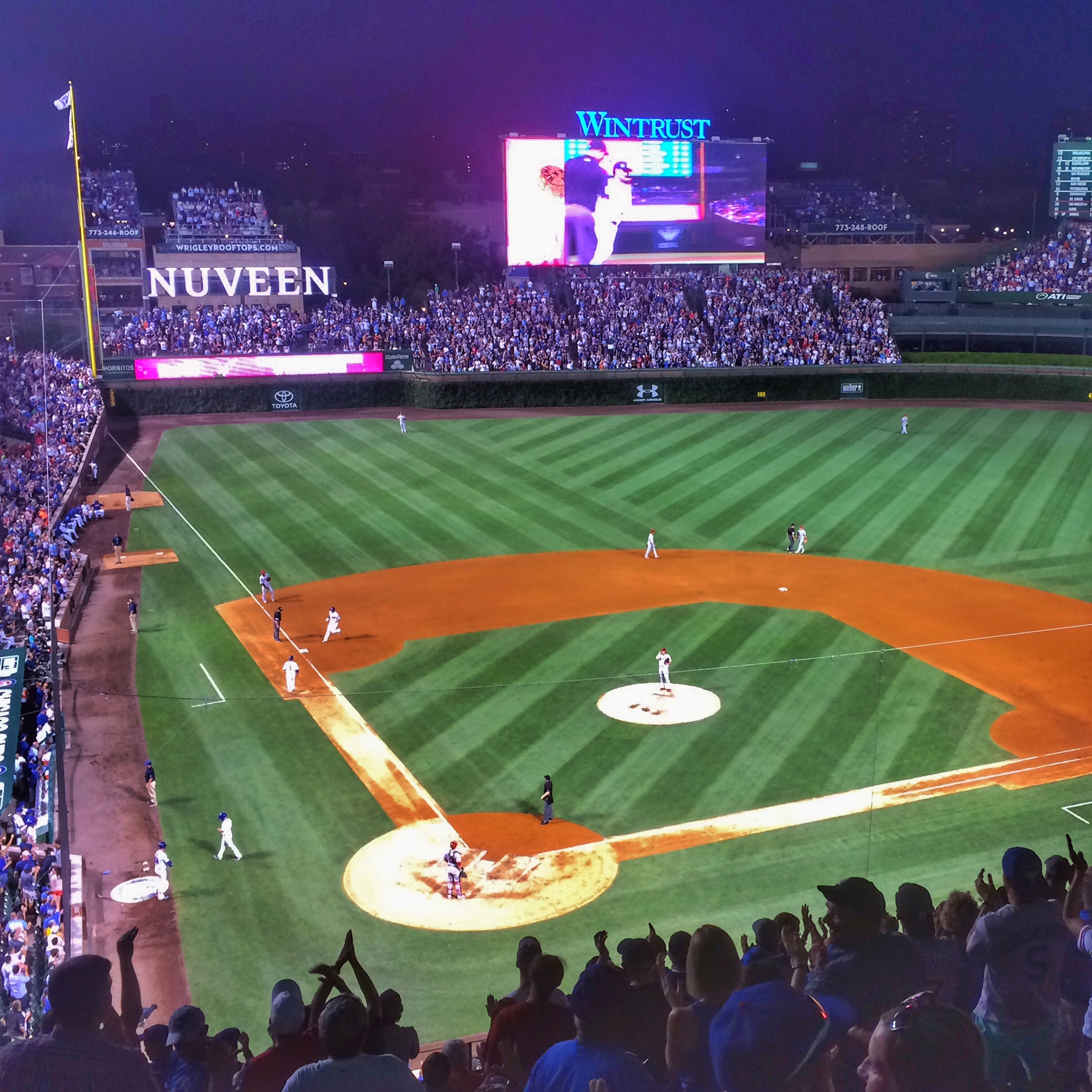 Mike Trout about to strike out against Strop to end the game in the ninth. I posted this because Trout will probably be in the Hall of Fame someday and I wanted to prove I saw him play (although you’ll have to take the video board’s word for it). 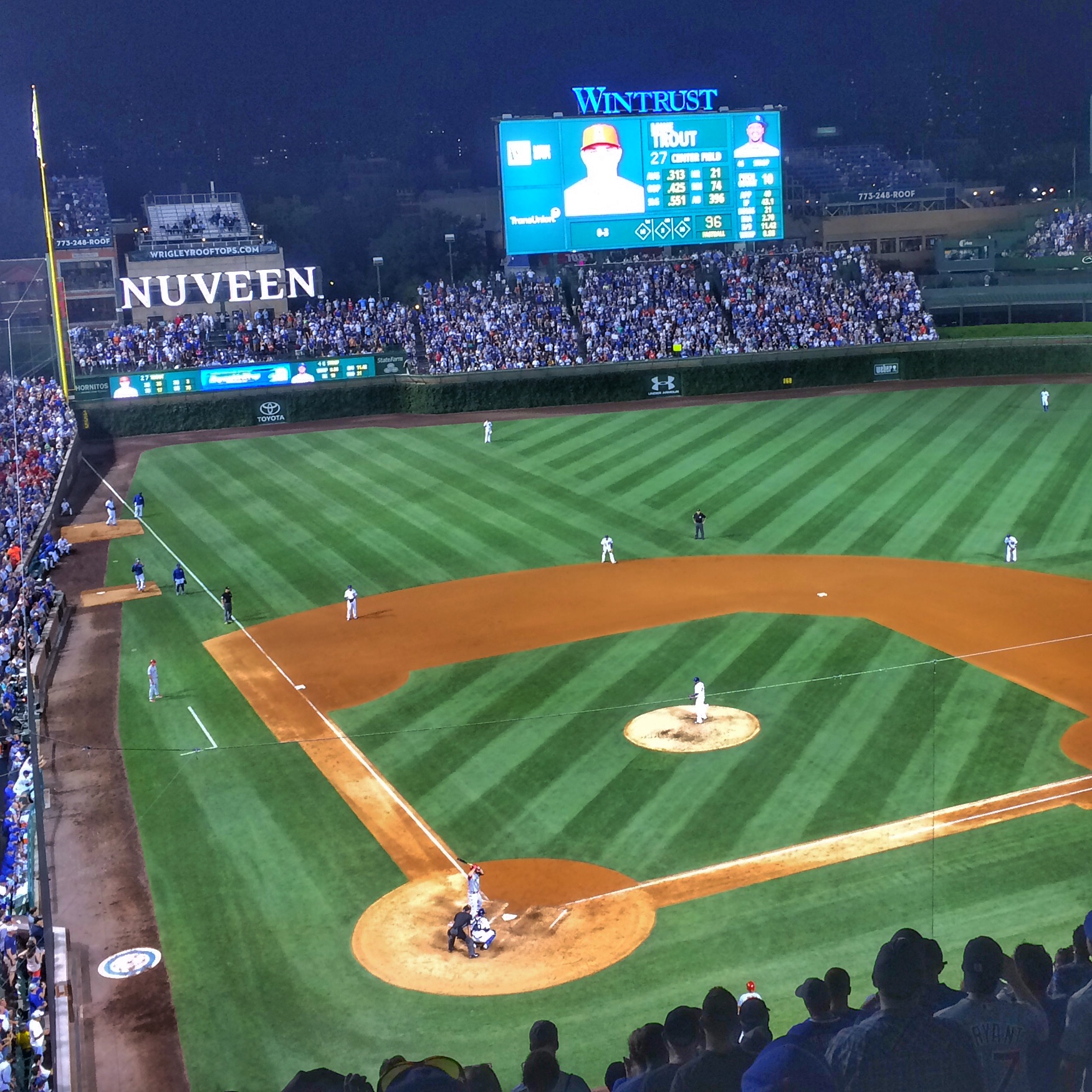 It was a great game, with two homers, great pitching by John Lackey, some amazing fielding by the Cubs and some humorous fielding by the Angels. We stuck around afterwards for the singing of the silly song and the raising of the “W” flag, which are mandatory parts of the “Cubs are the best team in baseball” experience. Near the end of the video, you can see a blurry replay of Bryant’s home run on the video board.

There were still a lot of fans around as we pushed our way out through the metal detectors and struggled to find a place where we could breathe. It was probably as close as I’ll ever come to knowing what it feels like to be born. 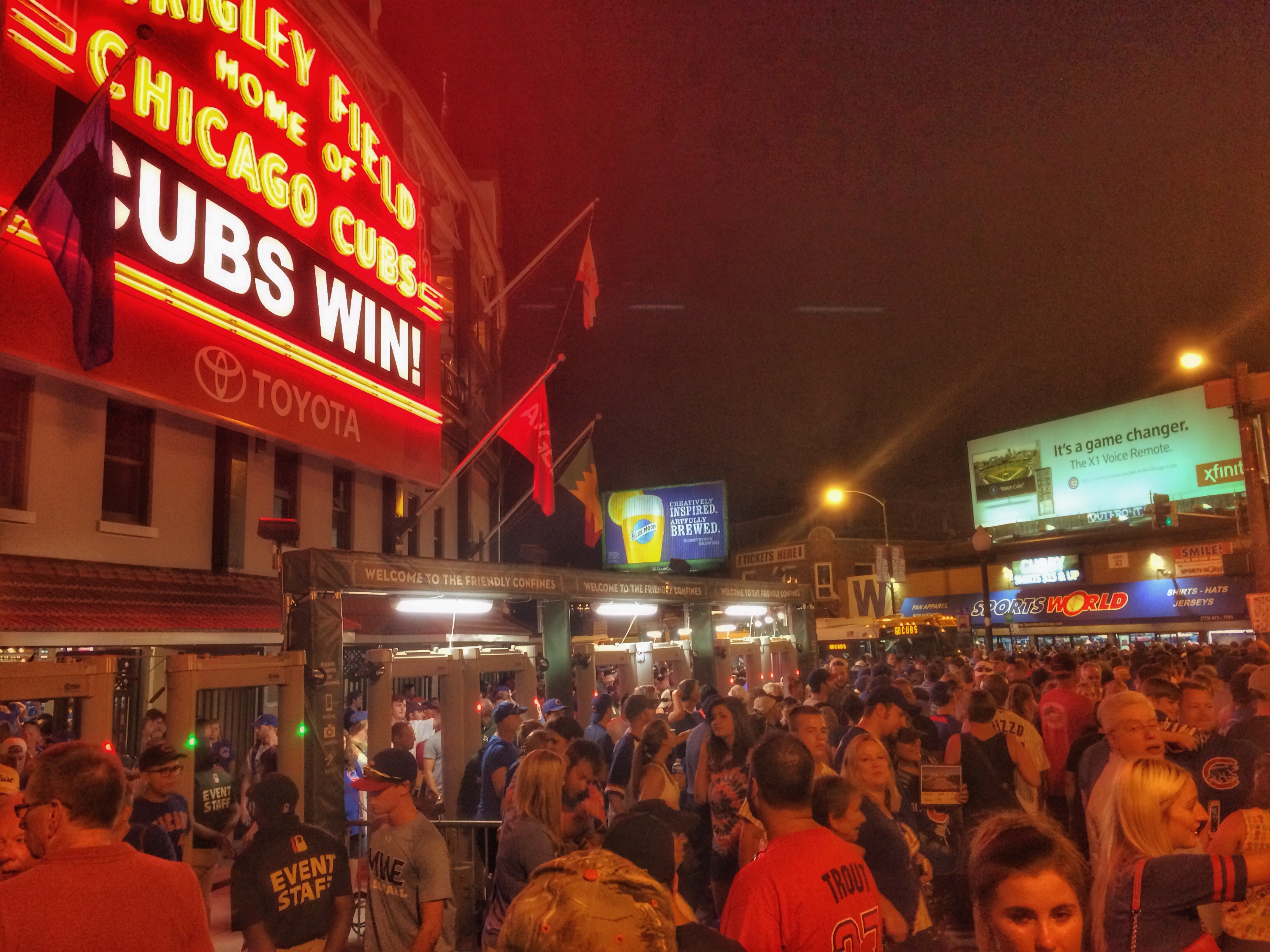 I’d been texting back and forth with my daughter all game long. She was downtown and volunteered to give us a ride home. We took her up on it. About 35 minutes after the final pitch, we met her on a side street two blocks from the park. After dealing with some extraordinarily rude traffic police, we were on our way in air-conditioned comfort and arrived back at the bus depot where we’d left our cars just a few minutes after the buses arrived, but without the knee pain and numb butts.

As a life-long Cub fan, it feels very strange to write that.