I spent 12 days birding in New Mexico and Arizona. Birds were so much my focus that I didn’t stop at any attractions or do anything that didn’t give me a chance to see birds. Except on the final night of the trip. I planned to drive home through Phoenix (to see the Rosy-faced Lovebirds that have established a population there) and, on a whim, I checked to see if the Diamondbacks were in town. They were, and they were hosting the Cubs!

All day I regretted my decision because it was 104° in Phoenix. I hung out at the zoo for five hours to bridge the gap between when I had to be out of my hotel and when I could get into the ballpark. I arrived shortly after the gates opened. 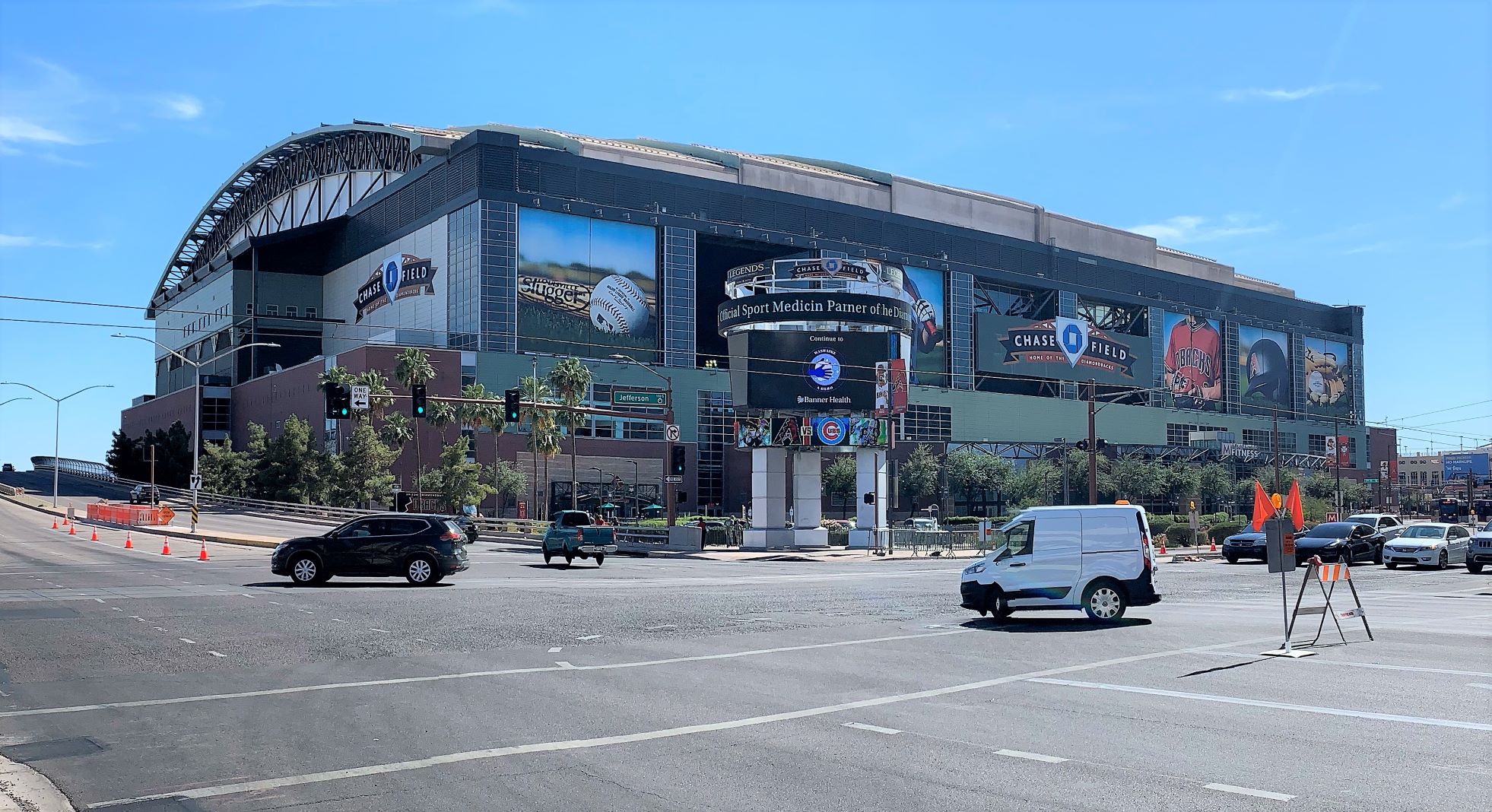 Chase Field is a domed stadium. The roof can be opened immediately over the field. The longer wall in the photo above is on the outfield side. The panels were opened before the game, allow the miserably hot air into the stadium and making it stuffy.

I walked around the stadium on the lower and upper levels. It’s an impressive ballpark that somehow doesn’t feel like a giant warehouse (like Miller Field in Milwaukee does). I bought a ridiculously expensive lemonade and chicken sandwich from Chick-fil-a and a keychain and pin in the shop, then found my seat.

The pool in right-center field, just beyond the outfield fence. 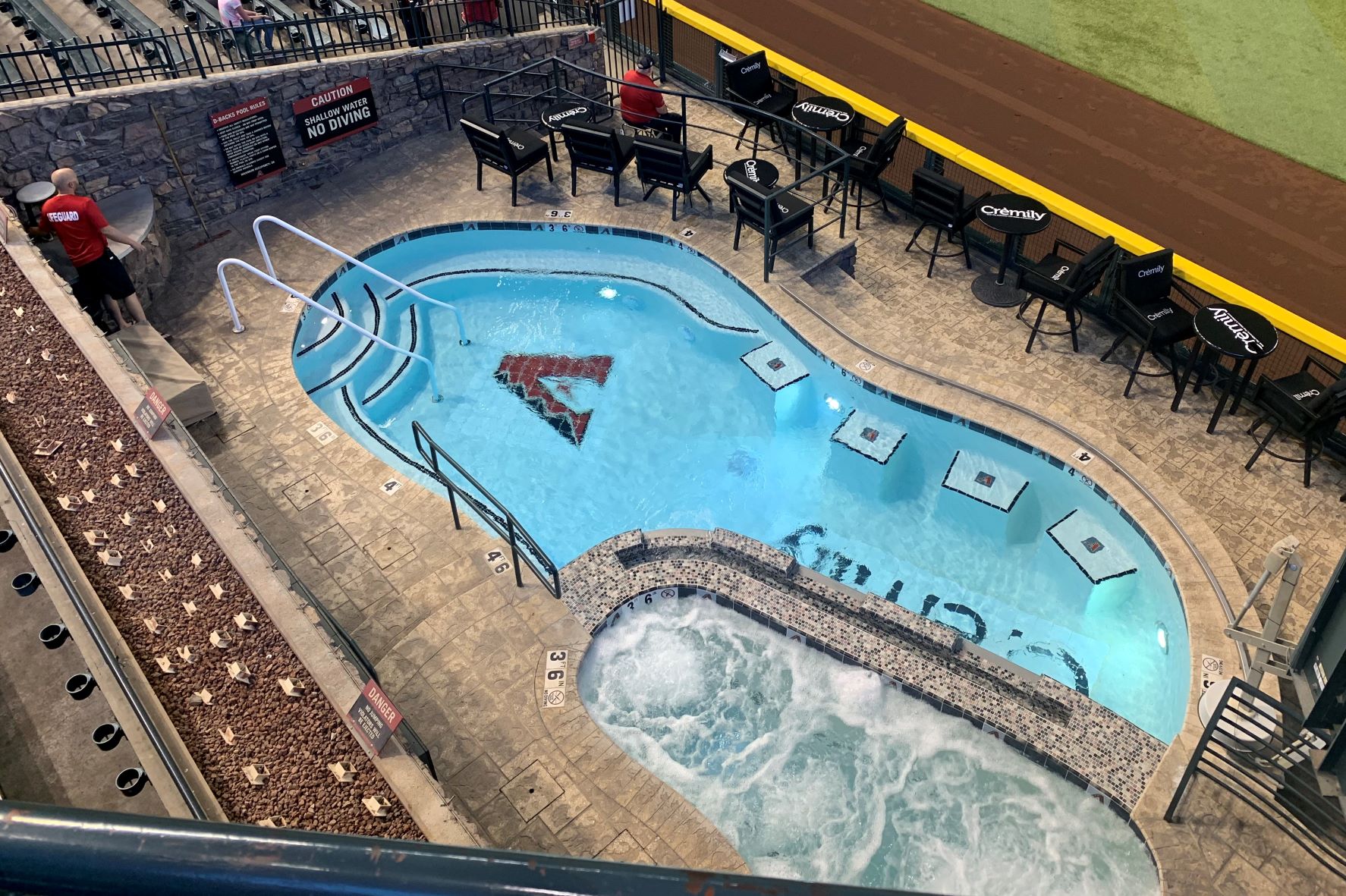 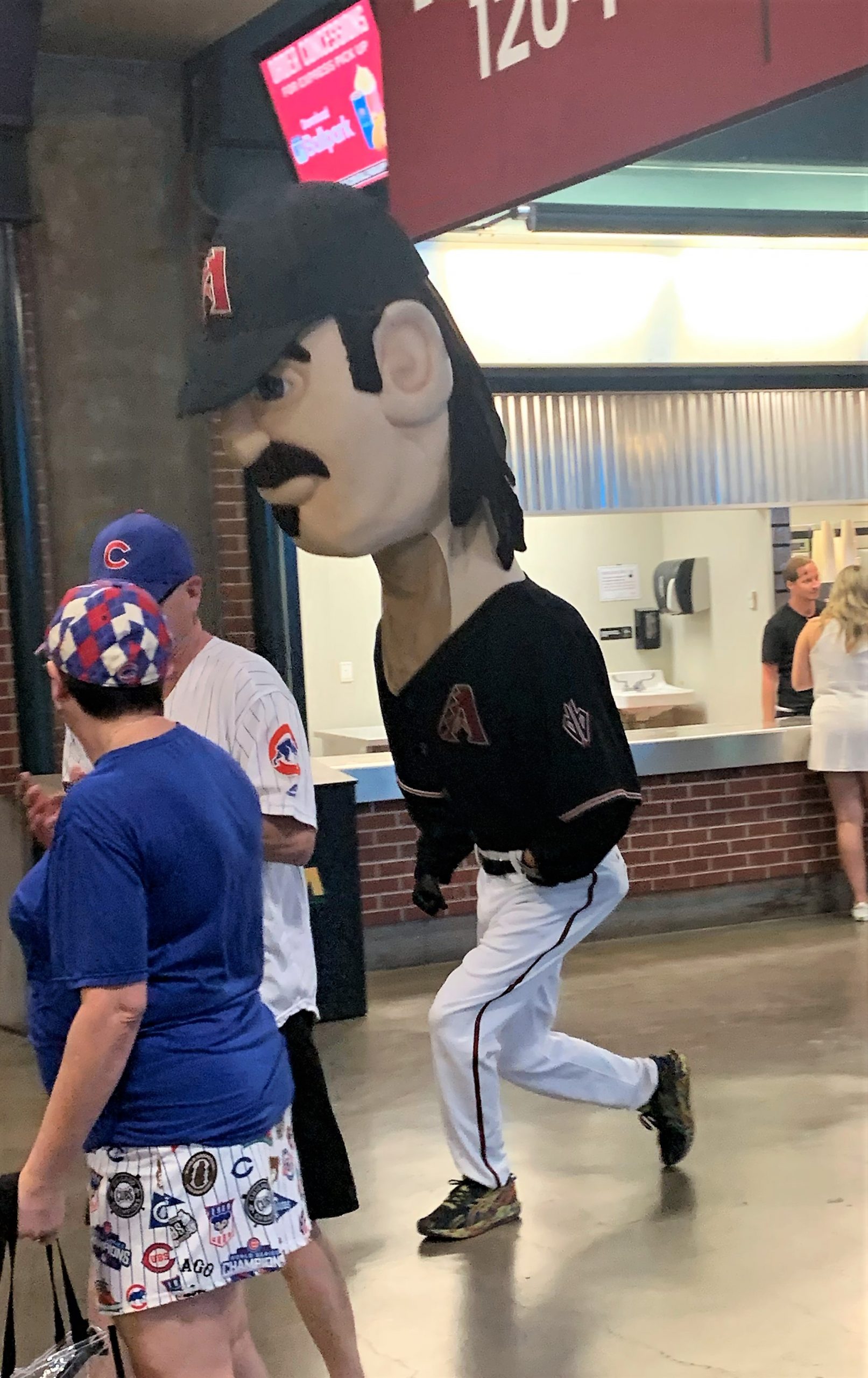 I was in the upper level behind home plate. It was a long way up, but a good view of the action. You can see the now-opened panels on both sides of the scoreboard.

It was a slow game. Kyle Hendricks pitched for the Cubs and struggled some, but hung in there. The Diamondbacks scored first in the 2nd inning when a walked batter scored on a single. The Cubs tied it in the 4th when Yan Gomes hit a home run. That was the Cubs second hit—they only had four the entire game.

In about the 6th inning, I moved to another seat down the right field line. After the game started, three jerks sat in the row in front of me. One of them couldn’t say an entire sentence without some vulgarity and he never stopped talking. Another one of them thought it was funny to say “Cold beer here,” every three minutes. And the third thought he was attractive and took his shirt off until a Diamondback employee came and told him to put it back on. It got old quickly. 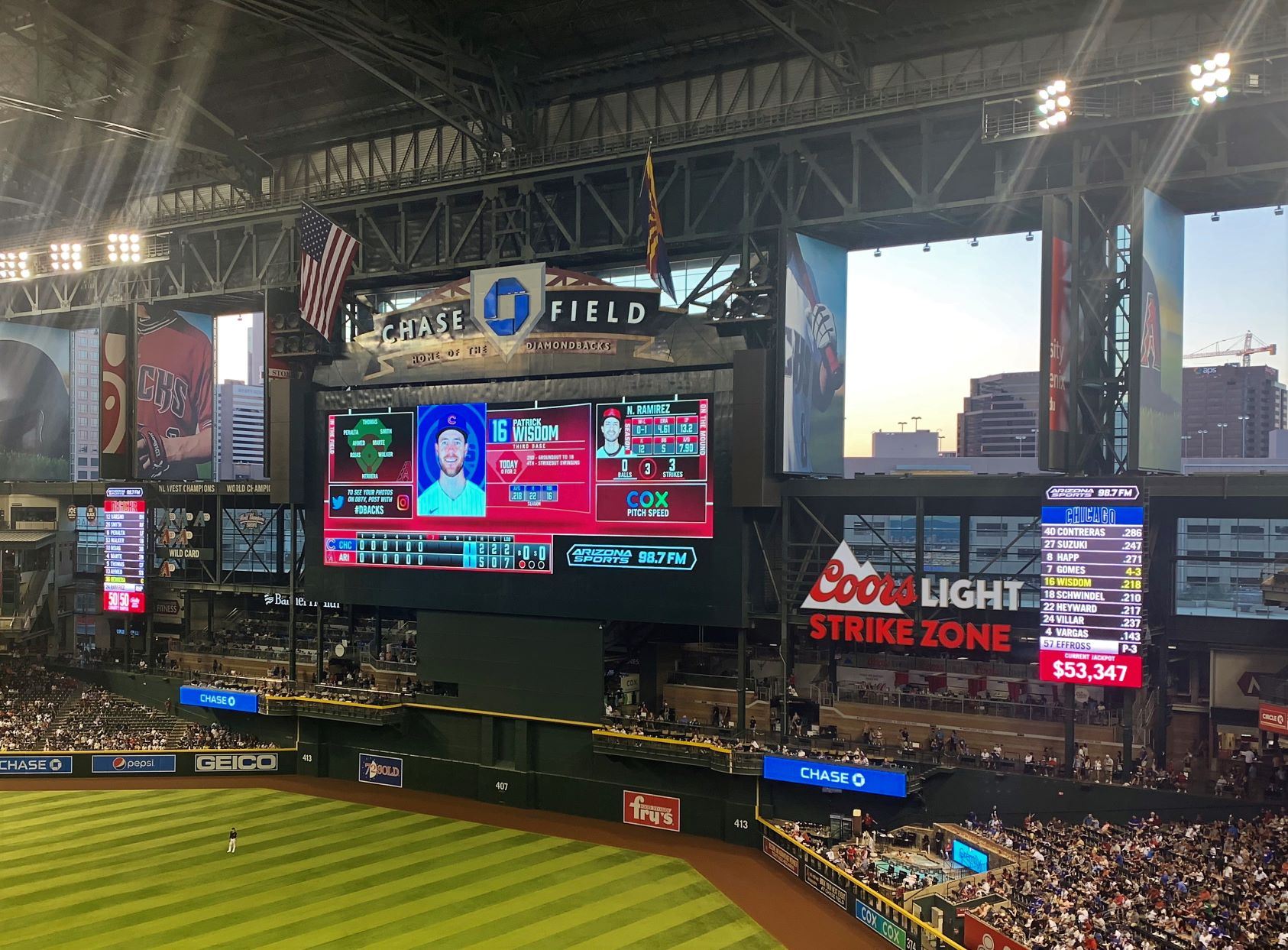 Zac Gallen pitched for Arizona. He struck out 9 and had the Cubs looking pretty helpless. The score was tied 1-1 going into the 9th. The game was approaching 3 hours long and I had a 2+ hour drive to Flagstaff yet to make. The Cubs “rallied” on three walks, two singles, and a broken-bat ground out by Jason Hayward to take the lead 4-1. I left then and was surprised that I couldn’t get the game—or any news about the game—on the radio. The Diamondbacks threatened in the bottom of the 9th, but the Cubs won 4-2. I enjoyed the park, but the game wasn’t a thriller, the heat was horrible, and I’m not sure it was worth the effort. 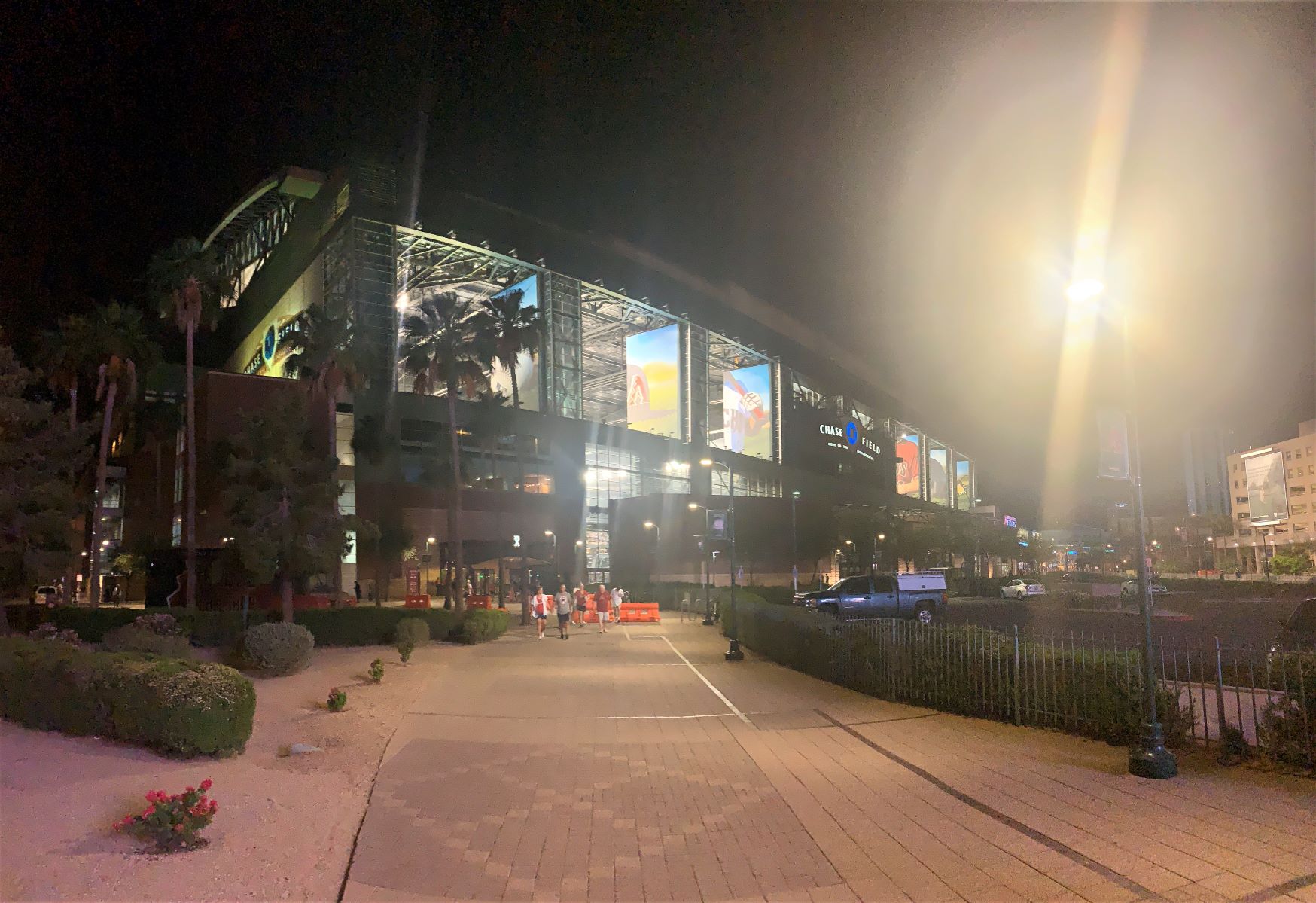 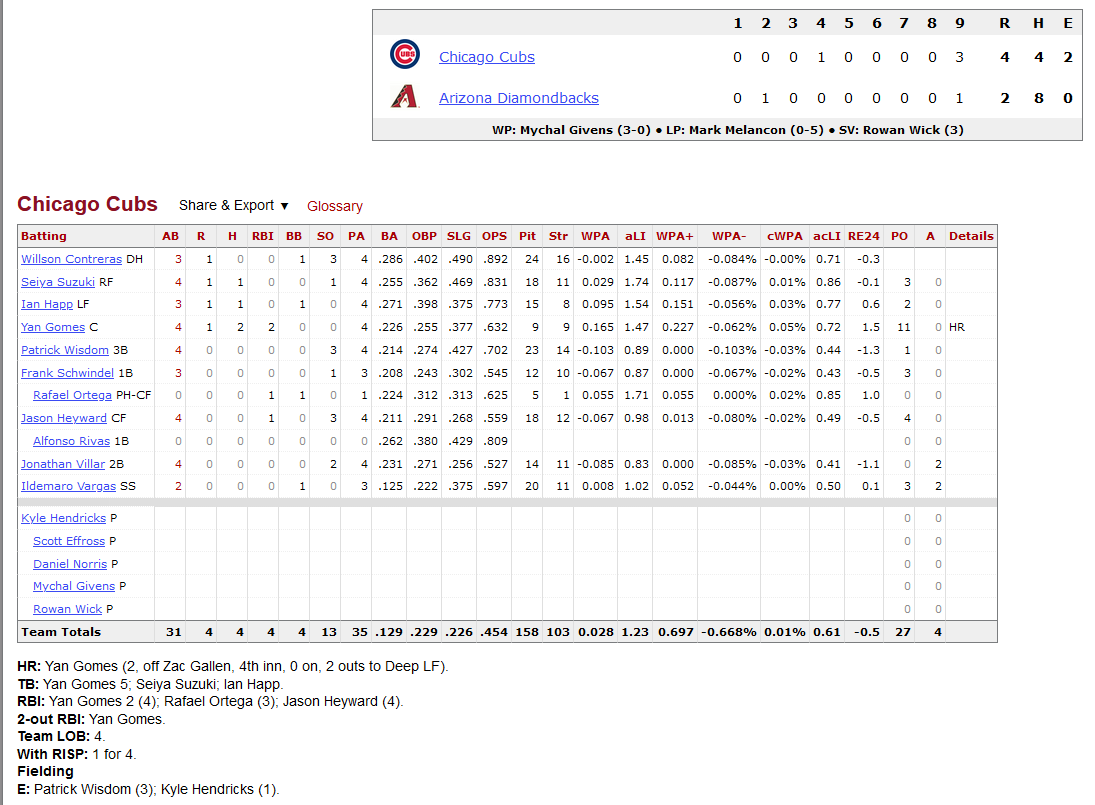 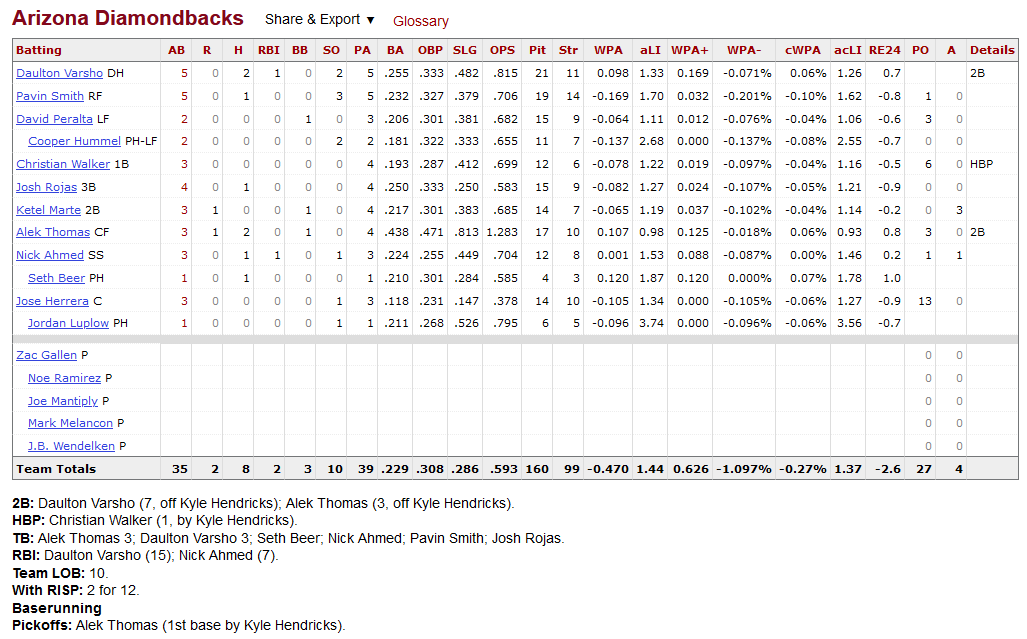 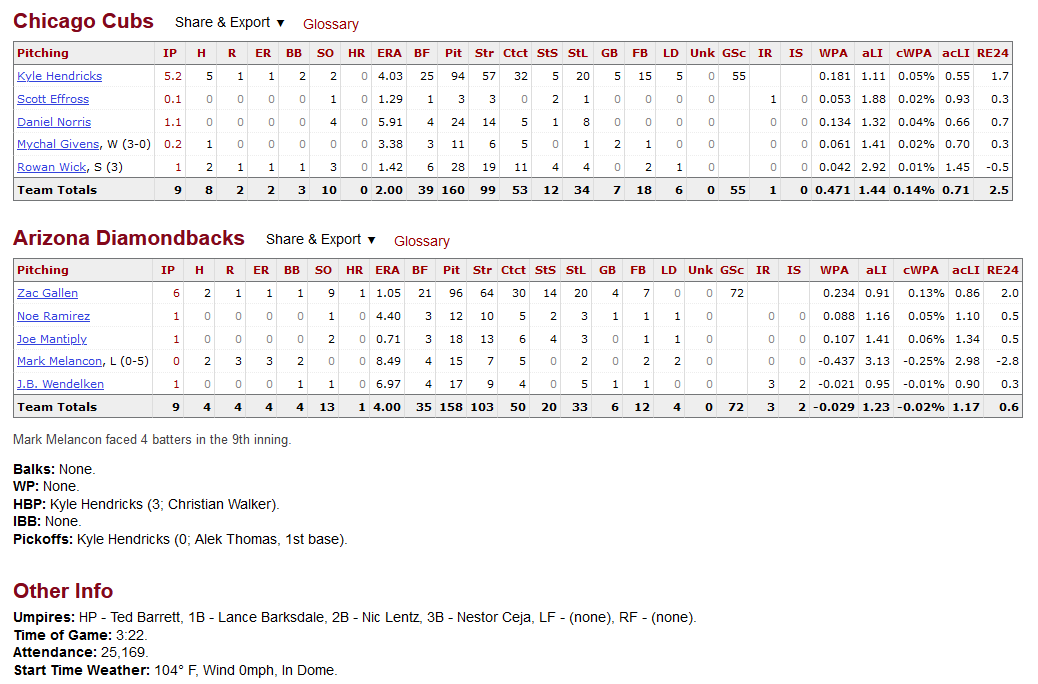