I’m making it an annual tradition to go to a Rockies game when the Cubs are in town. This year we went with a coworker and his wife.

Our seats were in the upper deck just down the third-base line.

The Cubs scored five runs in the second, capped by a monster three-run shot by Kyle Schwarber. They scored three more in the fifth and another two in the eighth. The Rockies scored a meaningless run in the ninth due to defensive indifference.

But the runs weren’t the main story. Last year, Kris Bryant was hit in the head by a Rockies pitcher. He was out for a while and never returned to form all year. In Tuesday’s game, the day before we were there, Bryant got hit twice more. He didn’t play in this game.

In the third inning, Javy Baez was knocked down by a pitch at his head. Cole Hamels, the Cubs starter, had had enough. He waited for the Rockies’ best player, Nolan Arenado, and hit him in the elbow with a 90 mph fastball. Arenado went full soccer-player-flop like he’d been hit with a bazooka, then started yelling at Hamels that the pitch was “too high,” even though the shot at Baez was head high. After he got done whining, he went down to first, but he came out of the game with a “bruise” an inning later.

We weren’t done. Hamels got hit on the foot in the seventh, and then Rizzo got plunked in the back in the eighth. He wasn’t happy, but he didn’t flop or scream. He just went down to first. The umpire warned both benches. There’s an unwritten rule in baseball that you don’t steal bases when your team is way up. Rizzo wasn’t having it. Nobody was watching him, so he strolled down to second, then made the figure “100” with his fingers to indicate how many runs he thought the Cubs should score. He headed for third on the next pitch, but Baez fouled it off so he had to get back.

Javy was on a mission. He was swinging as hard as he could. With a 2-2 count, he nailed one that went 460 feet into left center. He stood and watched it for a long time (breaking another unwritten rule), then broke into a very slow jog while staring at the pitcher.

In the bottom of the ninth, Cub pitcher Brad Brach hit Rockies catcher Wolters (which led to the Rockies single run). He should have been tossed from the game but wasn’t. I never heard why. The Rockies manager was out on the field protesting—which was kinda funny since it was his team that started it and kept it going. I figure the umps told him that it was the bottom of the ninth with one out in a 10-0 game. If Brach got tossed, the Cubs’ next pitcher would have as long as he wanted to warm up, and everybody would have to stand around for another 15-20 minutes. Wouldn’t he just rather get it over with?

Hamels went seven innings and allowed no runs, his third straight start of seven or more innings and no earned runs. The Rockies loaded the bases in the first with one out but didn’t score. 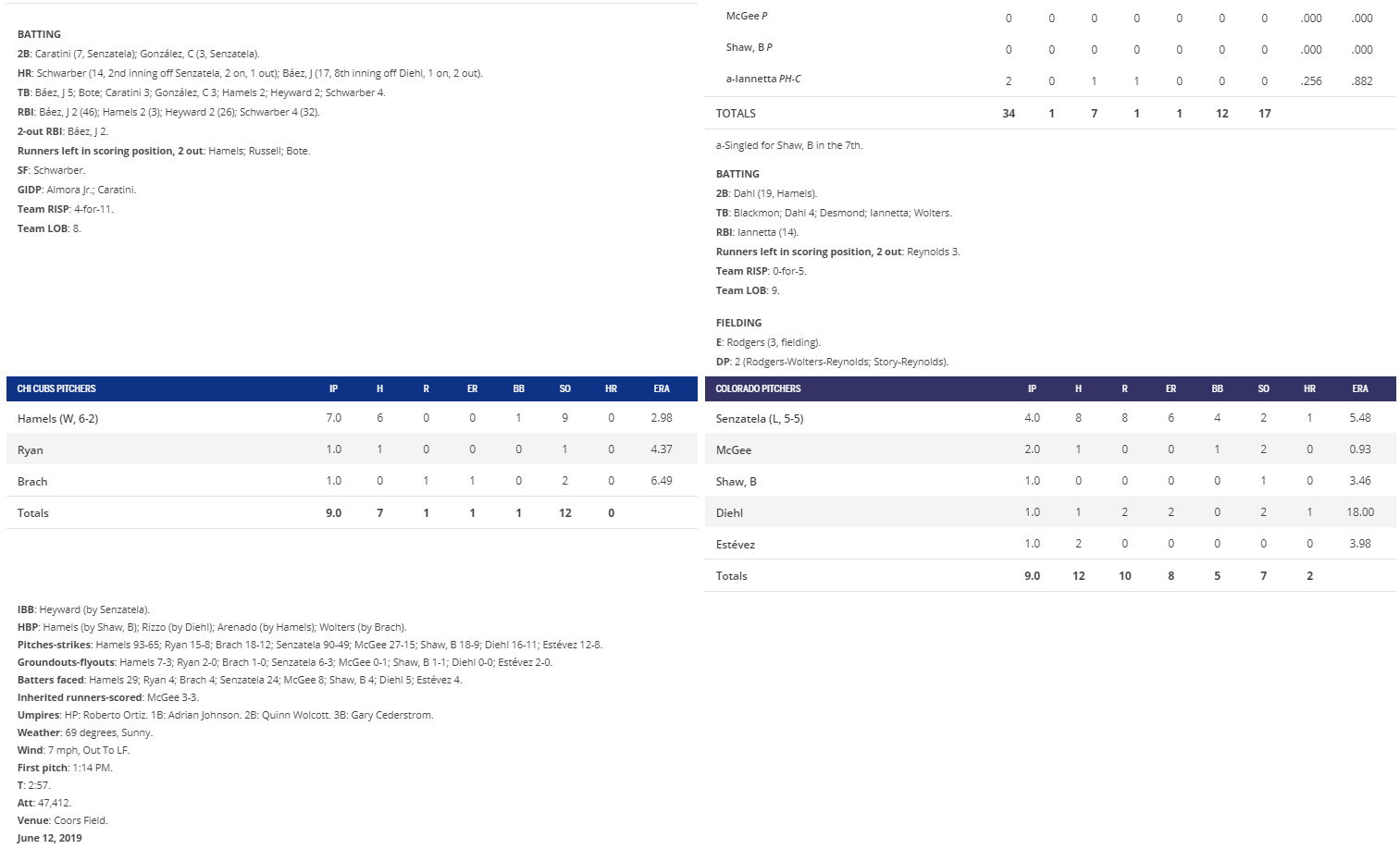 The Cubs lost the series 2-1 but won 2 when the Rockies were in Chicago a week ago, so the season series ended 3-3. It’s probably a good thing the two teams don’t see each other again this year.