I’ve gotten away from baseball in the past two years. The shortened 2020 season with the ridiculous Covid restrictions was just silly. I hate some of the new rules (man on second to start extra innings, pitchers must face three batters, designated hitter in the National League). And the creep of political correctness into sports drives me crazy. I’d signed up to watch Cubs games when we moved to Colorado, but after not watching any games after the Cubs traded Bryant, Rizzo, and Baez mid-season in 2021, I cancelled my subscription.

Then I saw somewhere that the Cubs were playing the Rockies early in the season and made a spontaneous decision to go.

The last time Sally was at a game with me—back in 2019—she was disturbed that she wasn’t wearing Cubs gear, so she bought a hat and a Baez jersey. This was the first chance she got to wear them. Of course, Baez is now with the Detroit Tigers and she wore a winter coat that hid the jersey, but she wore it. I continued my long-standing tradition of NOT wearing anything with a team logo. All of this is funny because she NEVER watches baseball except when she goes to a game with me. 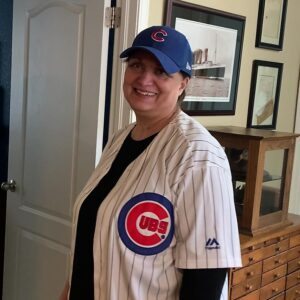 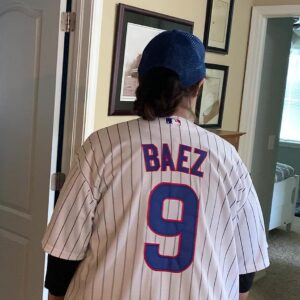 The big news for the Rockies this past off-season was the singing of Kris Bryant to a long-term contract. I enjoyed watching Bryant when he was with the Cubs, but he was frequently injured and didn’t quite live up to expectations. I’m rooting for him with Colorado. When he came up to bat the first time, all the Cubs fans (probably half the not-very-large crowd) cheered. This confused the woman seating behind us, so I turned and explained that he was a star with the Cubs when they went to the World Series. I turned and exchanged brief remarks with them a couple other times during the game—which paid off later. 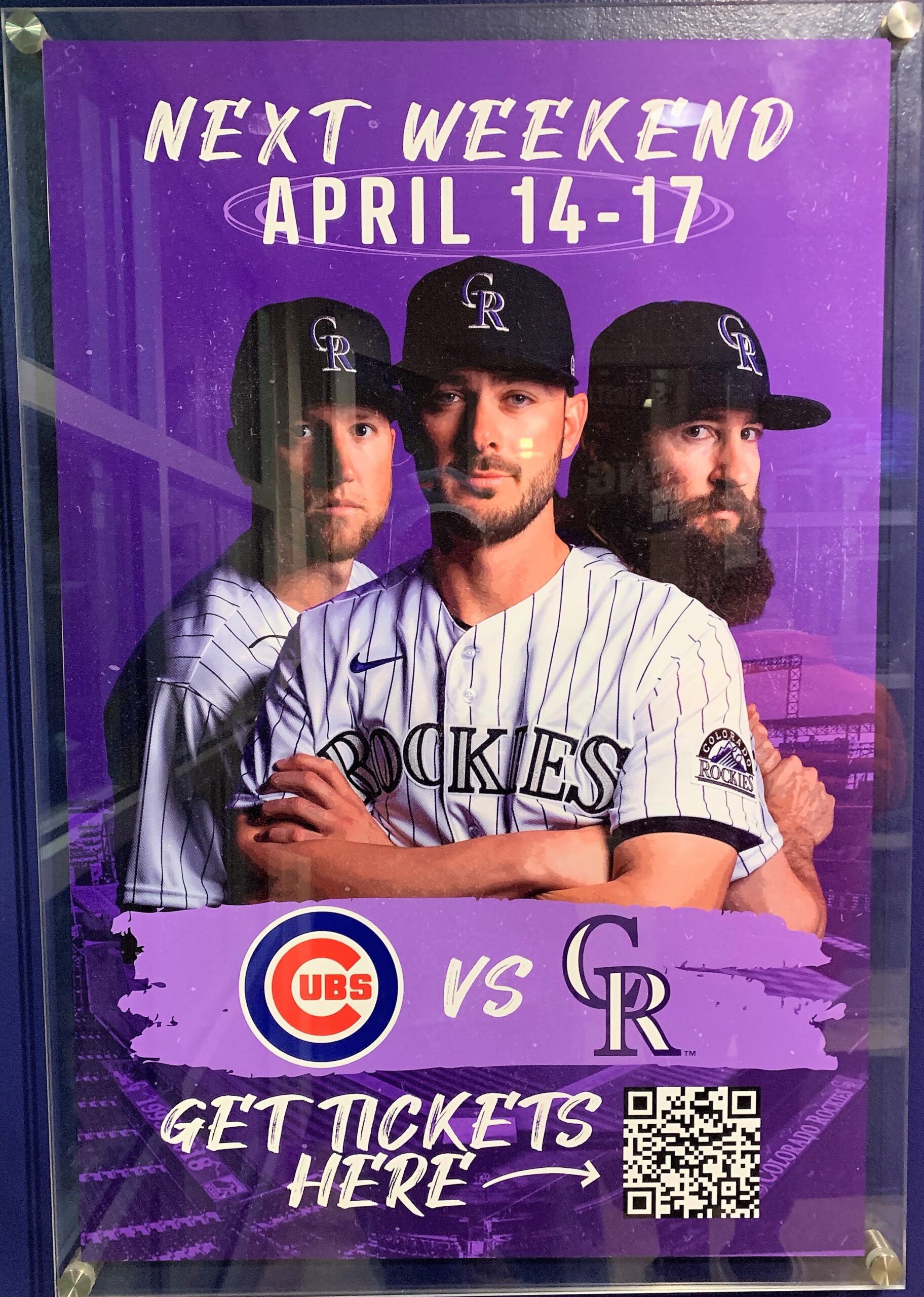 Looking across at our seats (see the red arrow?)—five rows below the purple row that marks exactly one mile above sea level. 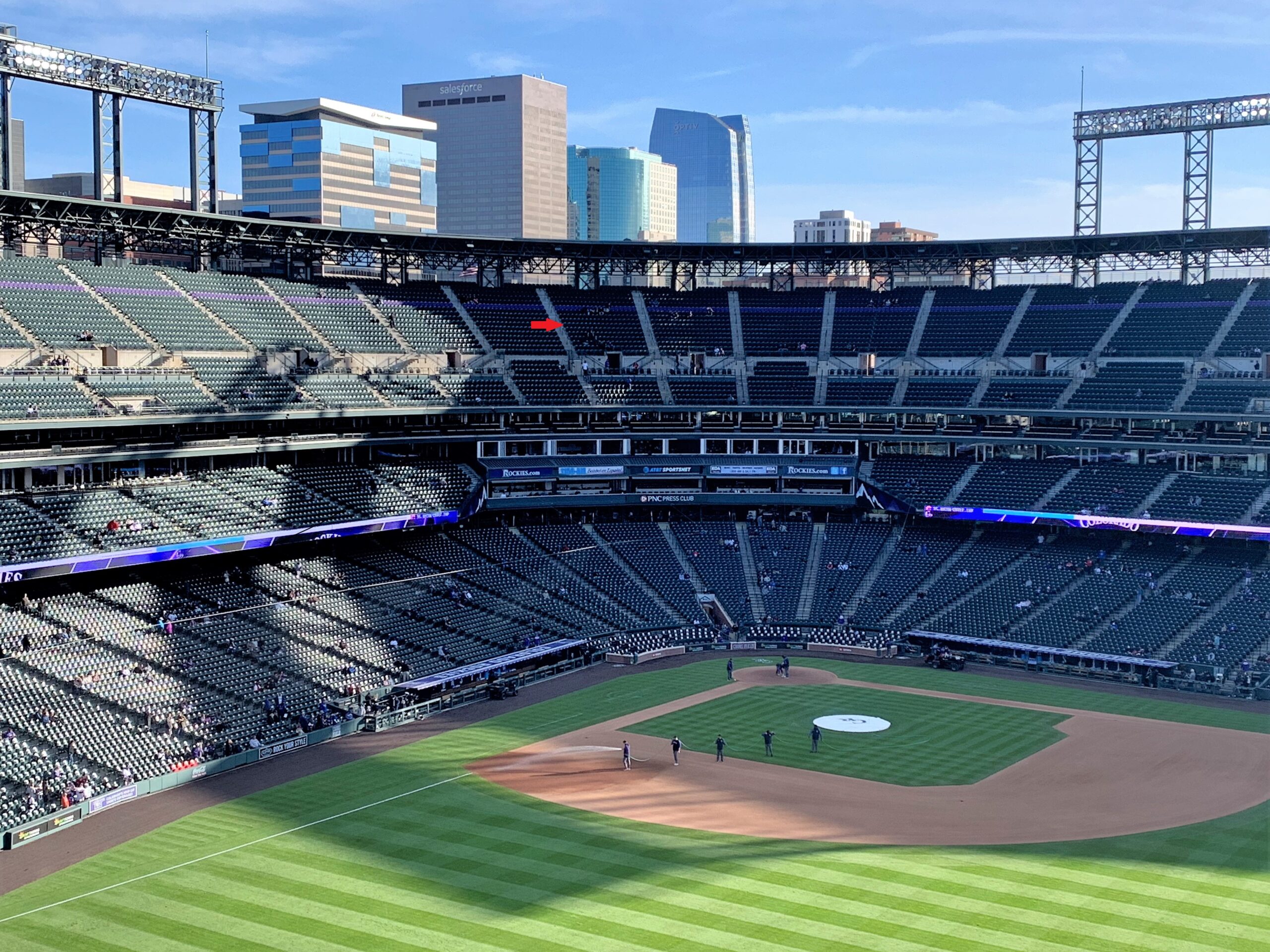 I sent Kelli a photo of the park and told her about the purple seats being a mile high.She and I got into a running conversation as she was watching the game back in Illinois. She told me about some of the new Cubs players—many of whom I’d never even heard of. (The only Cub in the starting line-up that I’d seen play before was Ian Happ in left field.) Kelli explained that we needed to root for the Cubs lead-off designated hitter Clint Frazier. I asked her why and got this response, which I thought was funny. 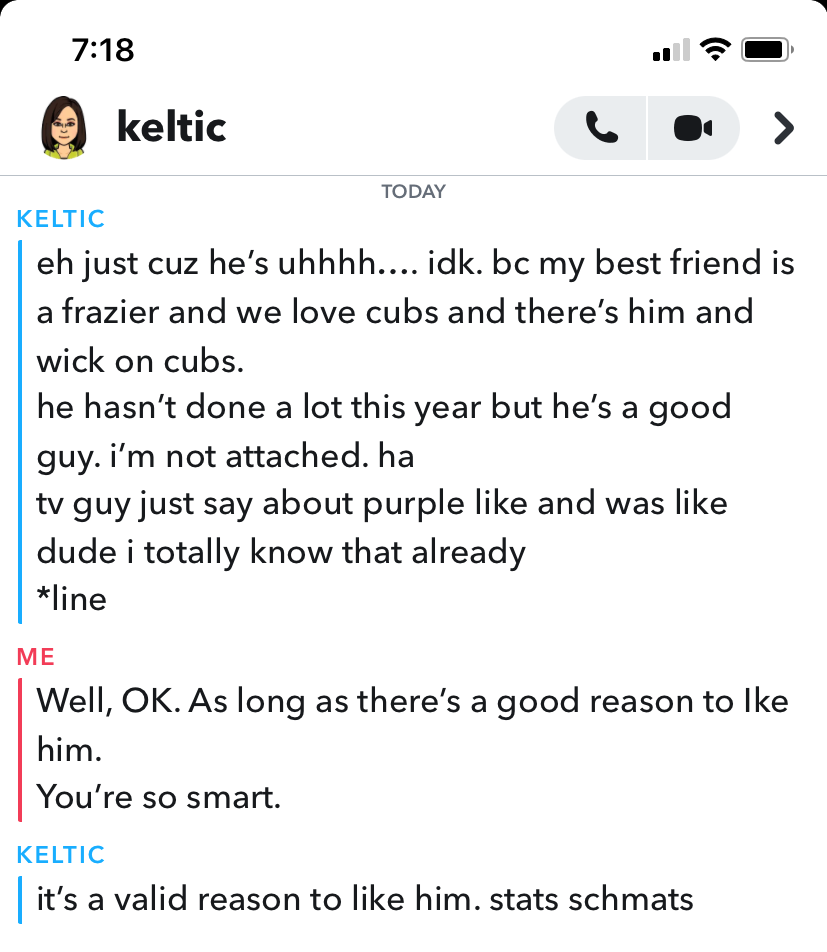 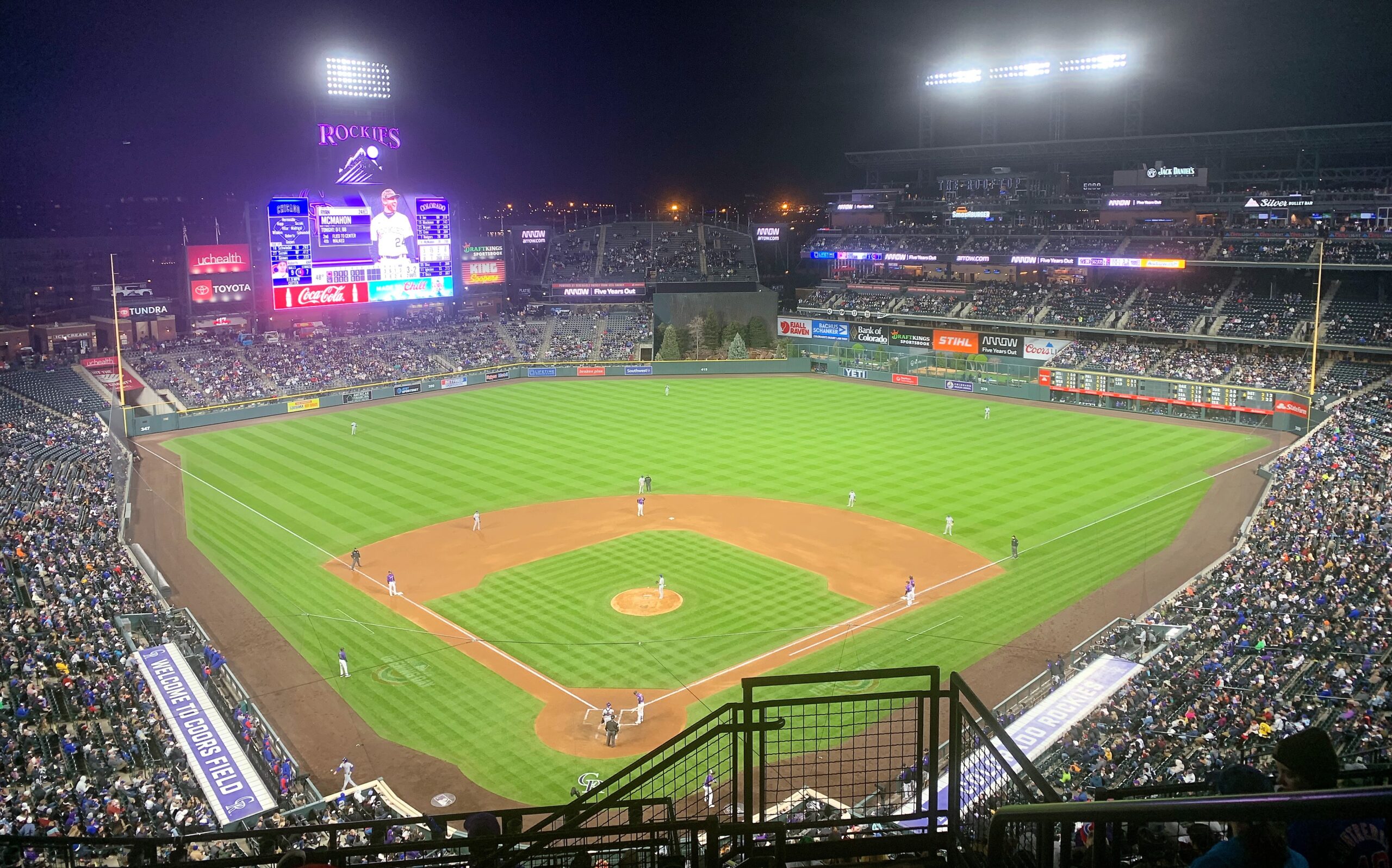 This was my first chance to see Seiya Suzuki, the Japanese star the Cubs signed over the winter. He doubled in a run in the first inning, but he also made an error in right and was doubled off first when he strayed too far on a liner to right. It was a classic TOOTBLAN (Thrown Out On The Bases Like a Nincompoop) and it cost the cubs a run.

Frank Schwindel (Cubs 1st baseman) hits a run-scoring single in the first. The Cubs scored three runs in the inning on four straight hits—of which only Suzuki’s double was impressive. Schwindel also hit a solo home run in the sixth which bounced off the top of the wall. 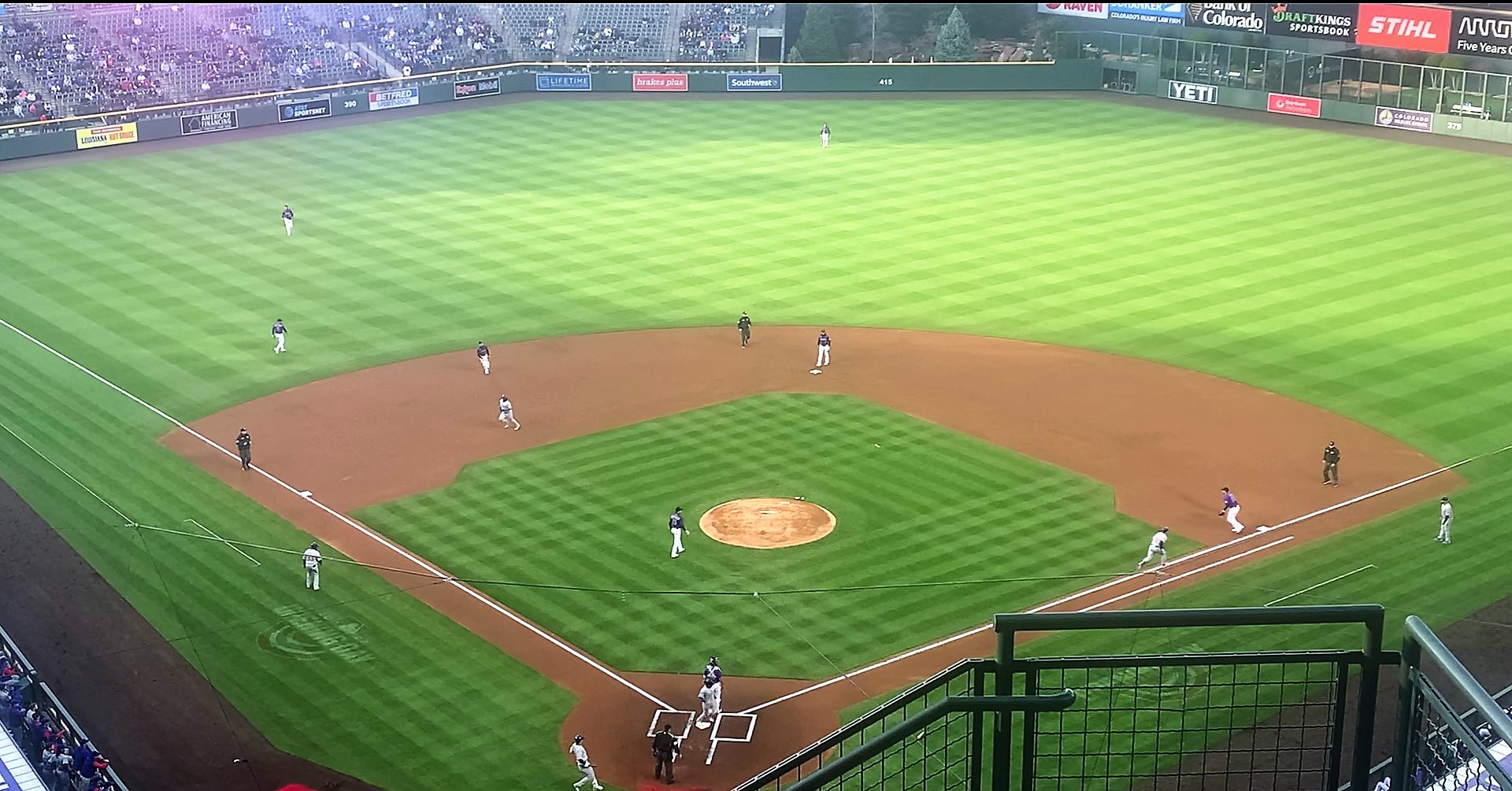 One of the highlights of the evening for me was when a Rockies player on the scoreboard described teammate Brendon Rodgers as “calm, cool, and collective.”

The fact that I knew nothing about the players on the team I was rooting for was strange and I lost track of what was going on from time to time. The game wasn’t very clean—besides Suzuki’s mistakes mentioned above, there three other errors and a Rockies TOOTBLAN when a runner on second didn’t run on a base hit by Bryant that turned a single into a rare 7-5 force play fielder’s choice.

During the seventh-inning stretch, I noticed a roving camera man pointing his camera in our direction. I told Sally how I’d never been on a scoreboard and that, if I ever was, I’d just wave complacently and not make a fool of myself like most people do. Still … I wanted it to happen—and was too stupid to take out my phone. Sure enough.

It’s oddly difficult to identify yourself when you see your picture 40x life-size on a huge screen. At first, I remained as cool as I predicted I would, but in the five seconds my image was up there, I began to look decidedly goofy. Sally was sitting immediately to my right, but never made it on screen. 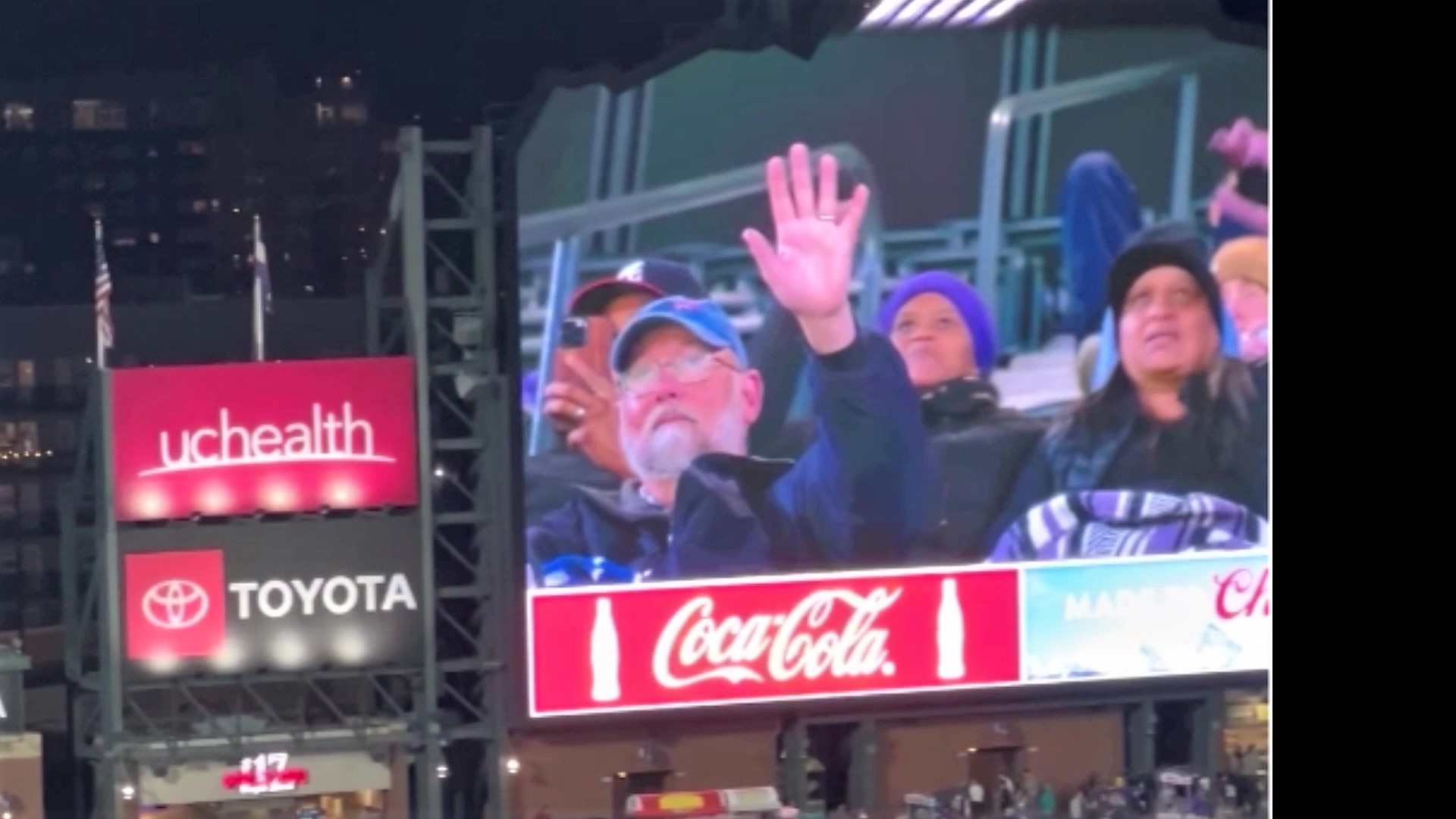 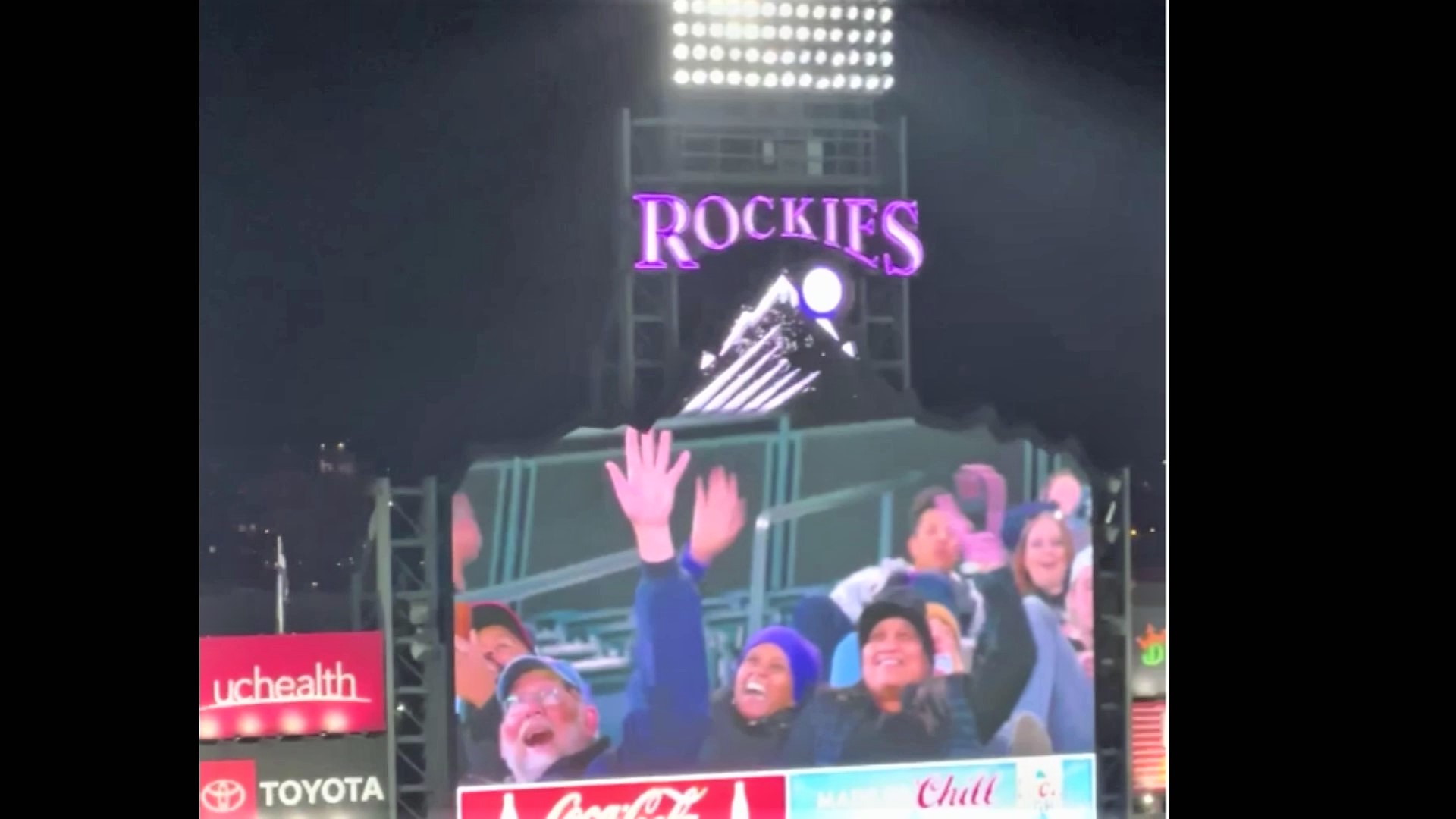 At the end of the video, you can see my scrambling to get my phone out of my pocket. I didn’t make it. I was sitting there thinking it had been fun but also regretting I hadn’t been ready. I asked the people behind me if they’d gotten by any chance. They did. The guy you can hardly see because he’s holding his phone in front of his face took some very shaky video—but it’s a whole lot better than what I got. He air-dropped it to me and I was set. We chatted about it for a bit—the lady on the right with the black hat put her hand on my shoulder in a friendly way that made me smile every time she spoke. They left a few minutes later and said a friendly goodbye.

Kris Bryant singles to right in the bottom of the ninth. 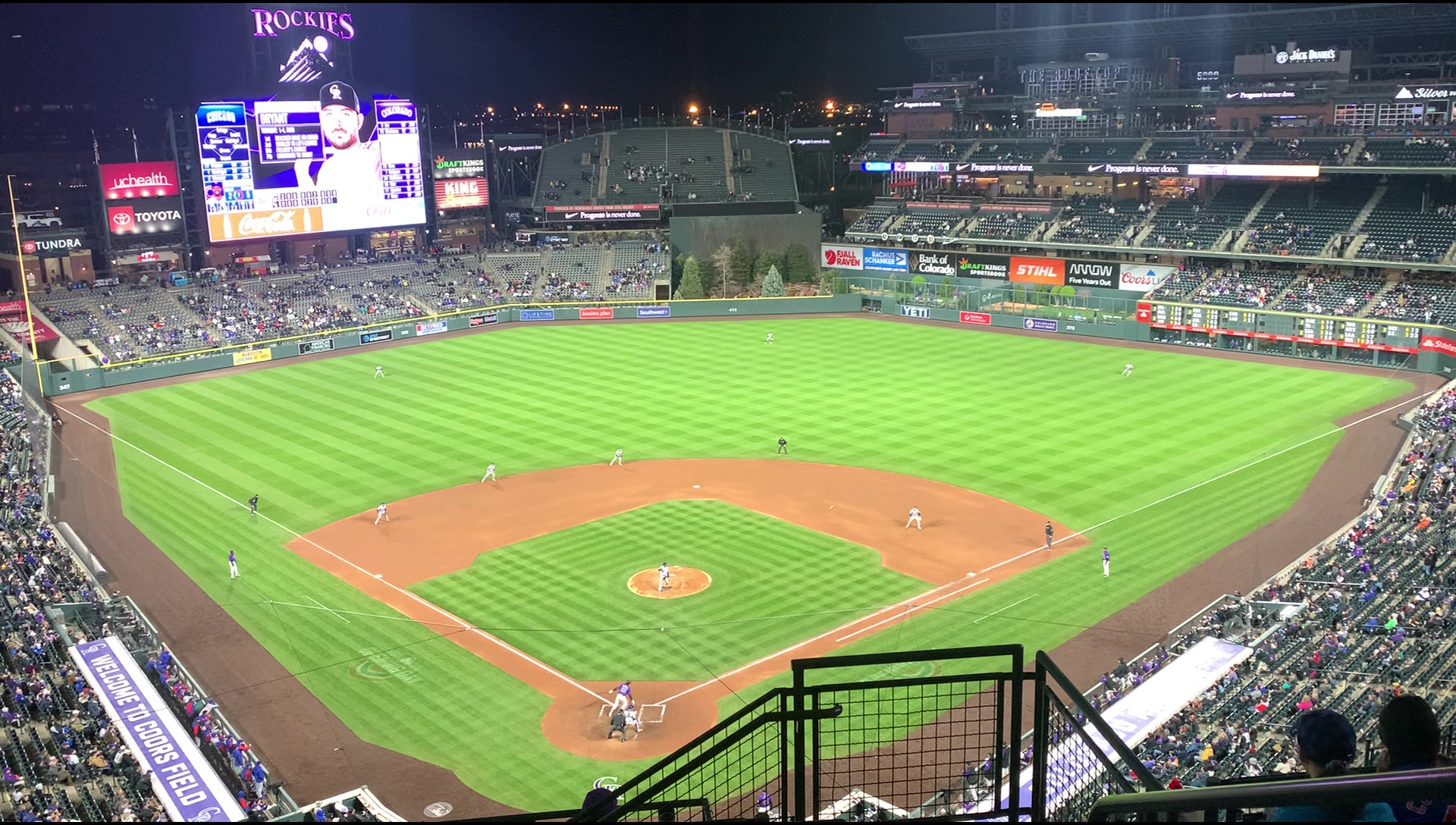 The official attendance was 24,444, but I think there were a lot of no-shows. The crowd was much smaller than at any of the other Cubs games I’ve attended at Coors Field, and by the time the game ended, half of them had left. The Cubs won 5-2, which made both teams 4-2 on the season.

We were on the interstate 20 minutes after the game ended and home by 11:00. 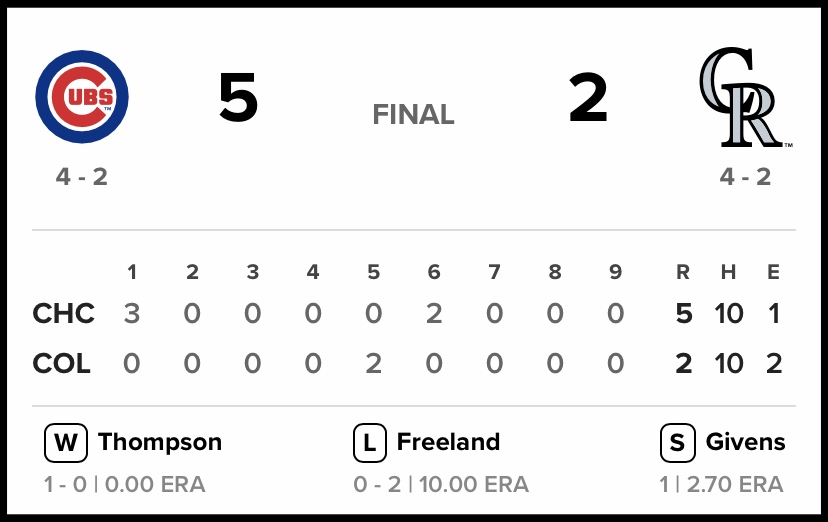 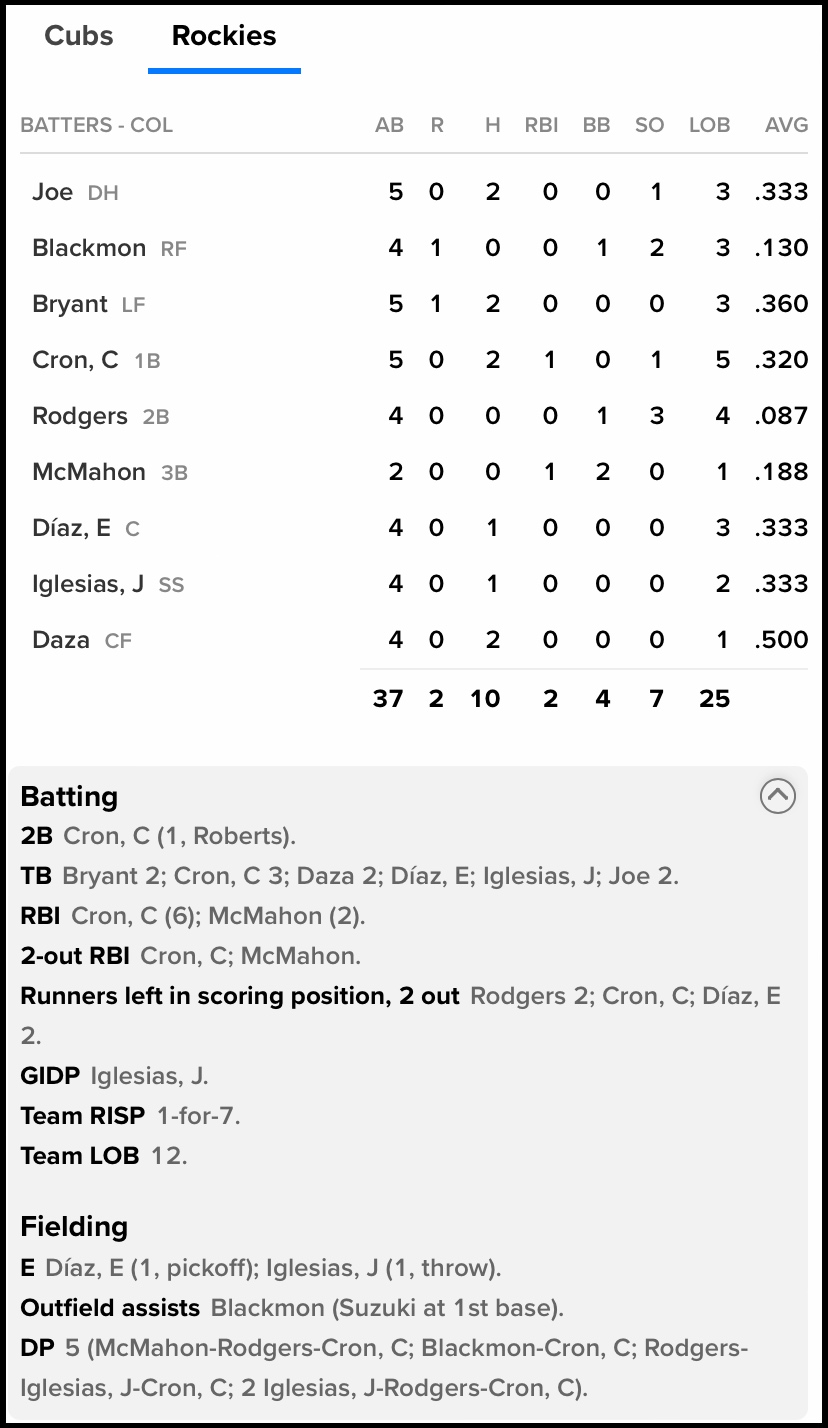 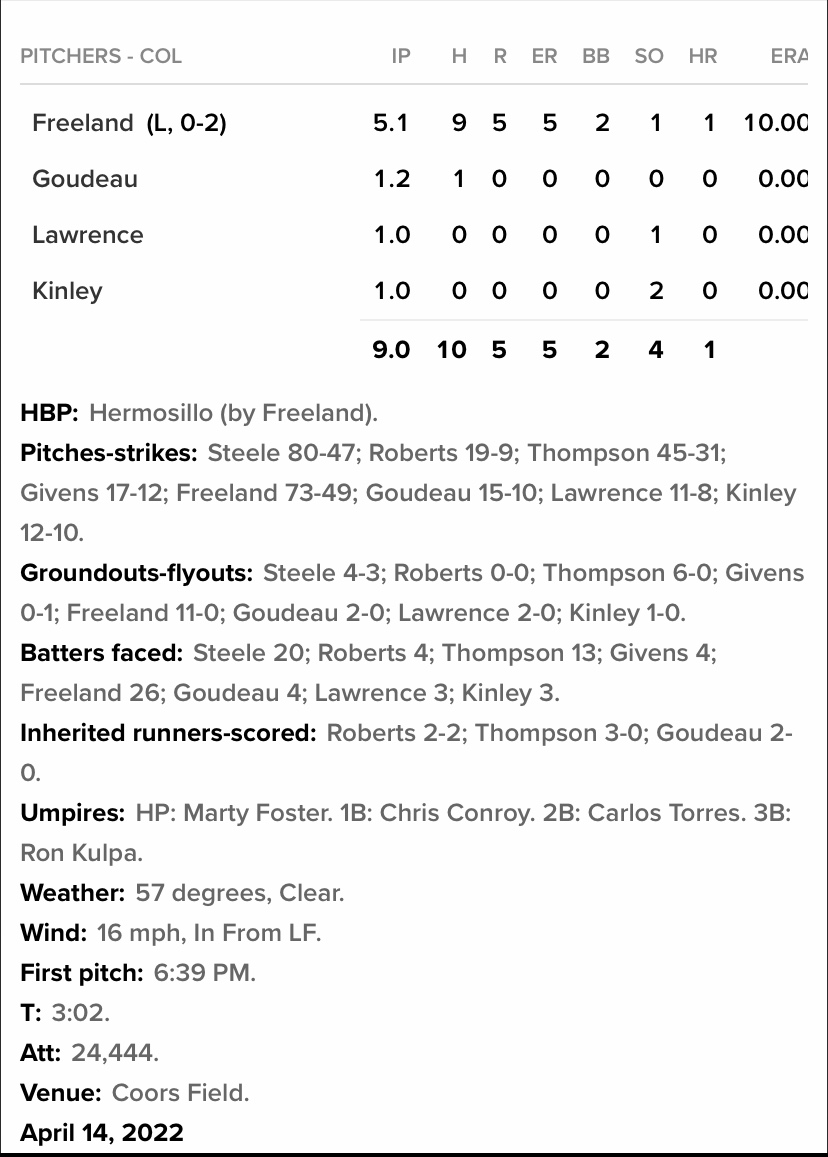 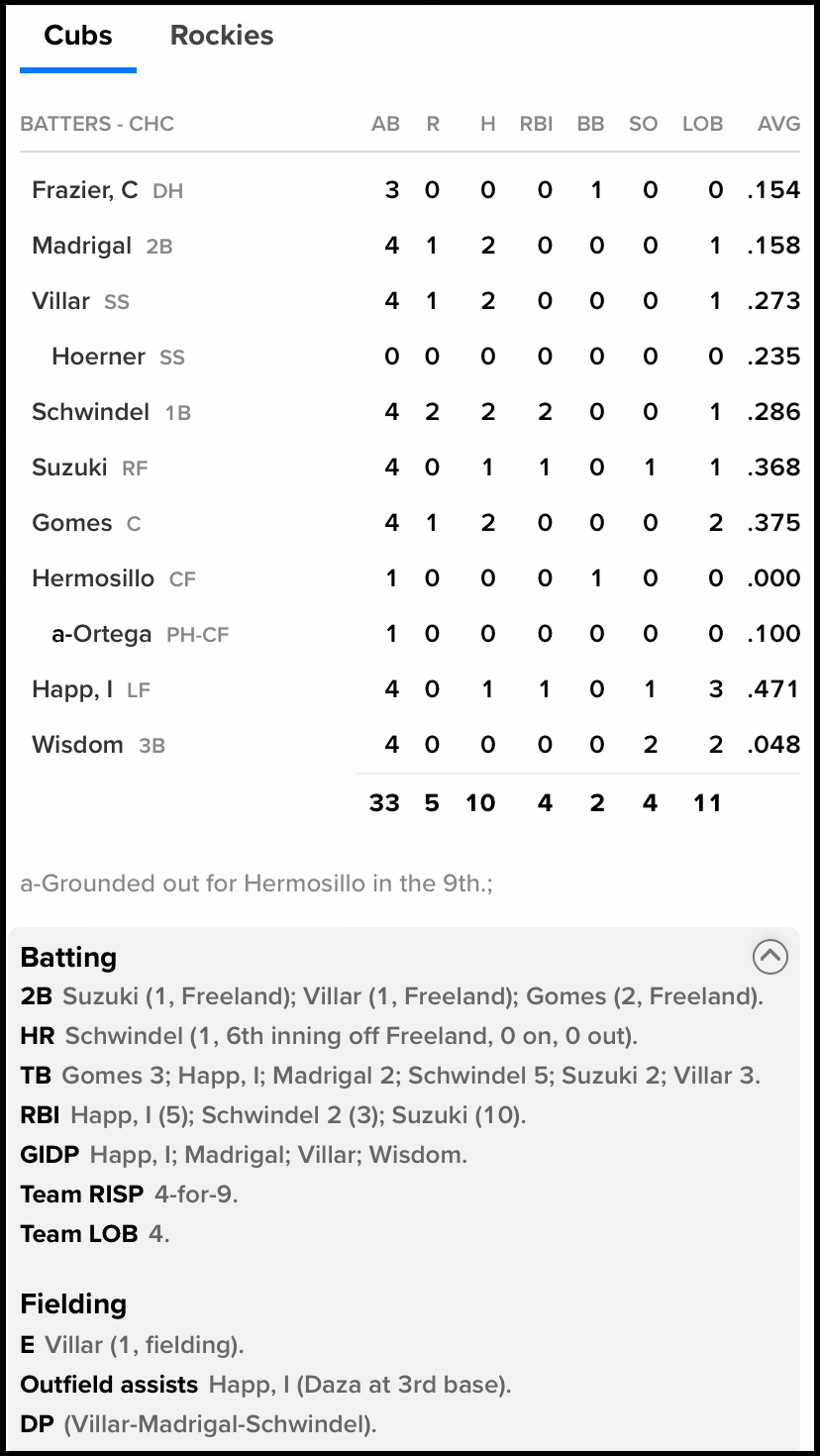 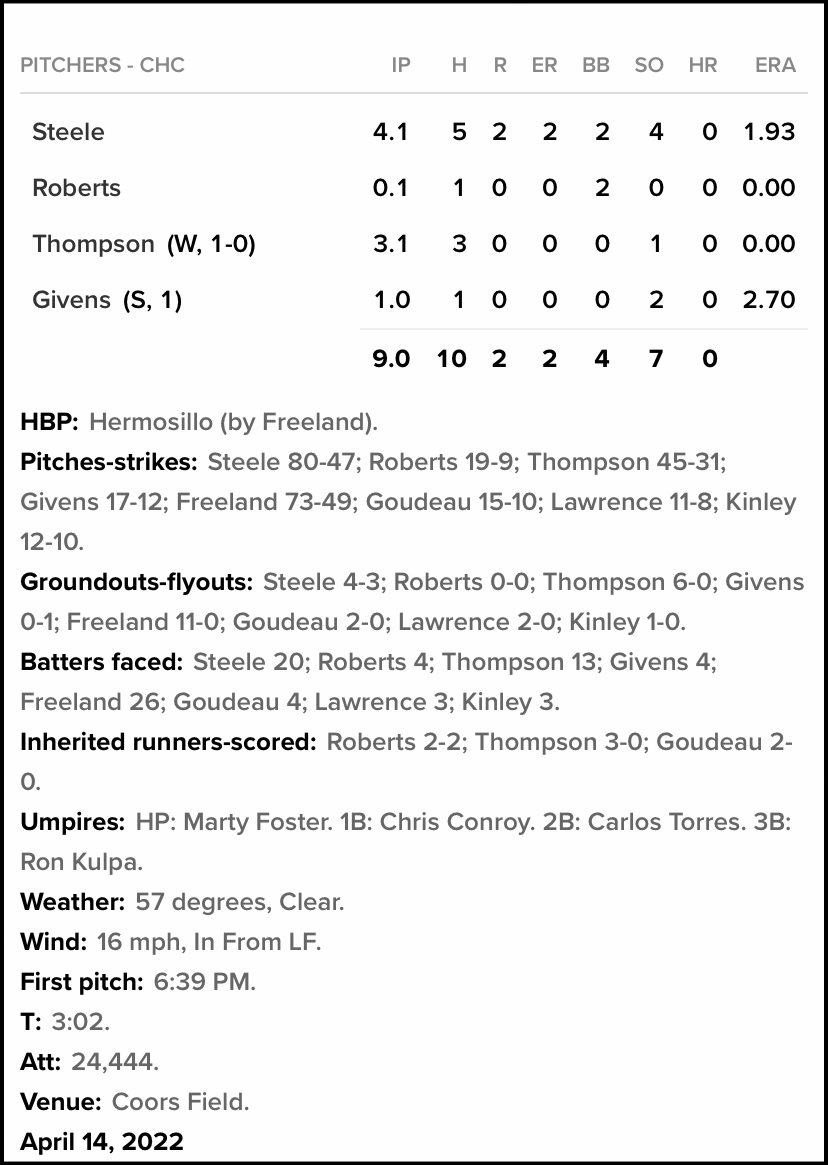