Curling is mesmerizing. I used to watch it late into the night during the Winter Olympics. I decided long ago that it would be fun to try it sometime, but I couldn’t find anywhere in Chicagoland where that was easy. When I moved to Colorado Springs, I discovered the Broadmoor Curling Club, which operates out of the Colorado Springs World Arena Ice Hall (what a terrible name). The club has leagues, and once or twice a year they host “Learn to Curl” classes to encourage people to join the leagues. I asked a friend if he’d like to take the class with me and he accepted immediately. It cost us $35 each.

After signing a waver, we sat in the bleachers with perhaps 30 other people. An old guy with a tam o’shanter gave us some curling trivia while a Zamboni smoothed the ice on the hockey rink behind him. There were four curling sheets marked on the ice along with the hockey lines. A woman then showed us the various pieces of curling equipment. She wasn’t a teacher, and I had little idea of what she was talking about until we got out on the ice and given a chance to use the equipment. She also explained the safety rules. We learned that curling stones weigh 40 lbs. and cost about $1,500. They’re made from a particularly strong and dense granite found on one island off Scotland. Behind the woman, two guys were walking around the rink spraying water droplets on the ice to create the pebbling that makes the stones slide.

We finally grabbed our brushes and went out on the ice. We were joined by a guy named Jeff (wearing a blue jacket in the photos) and a teacher named Joe (in the black coat). Joe showed us how to stand in the toe block with one foot while putting our other foot on a slider. We held the handle on the stone with our right hands and a stabilizer with our left. We were to push off with our right foot, then let it trail behind us. We held on to the stabilizer for balance until we reached the spot where we let go of our stones. As you can see in the video below, I was too upright and shaky during my practice runs but got lower and smoother and more comfortable as the evening progressed. We gave the stones a slight spin as we released them. Ideally, they should spin three times as they travel down the sheet. It’s the rotation that causes the stone to curl (which gives the game its name). If I stood at the end of the sheet, I could see the incoming stones curl as they moved. A teammate (the “skip”) stood at the far end and gave us directions on where to aim and which direction to spin the stone. The skip also called out directions to the sweepers to sweep or not to sweep, depending on how fast the stone was moving.

We also learned to use the brush. The brush had a pad on the end. Sweeping it across the ice in front of a moving stone created friction that melted the pebbles a bit. This reduced the friction on the stone and made it travel further. Joe told us that a good team can increase the distance a stone travels by as much as 10 feet. 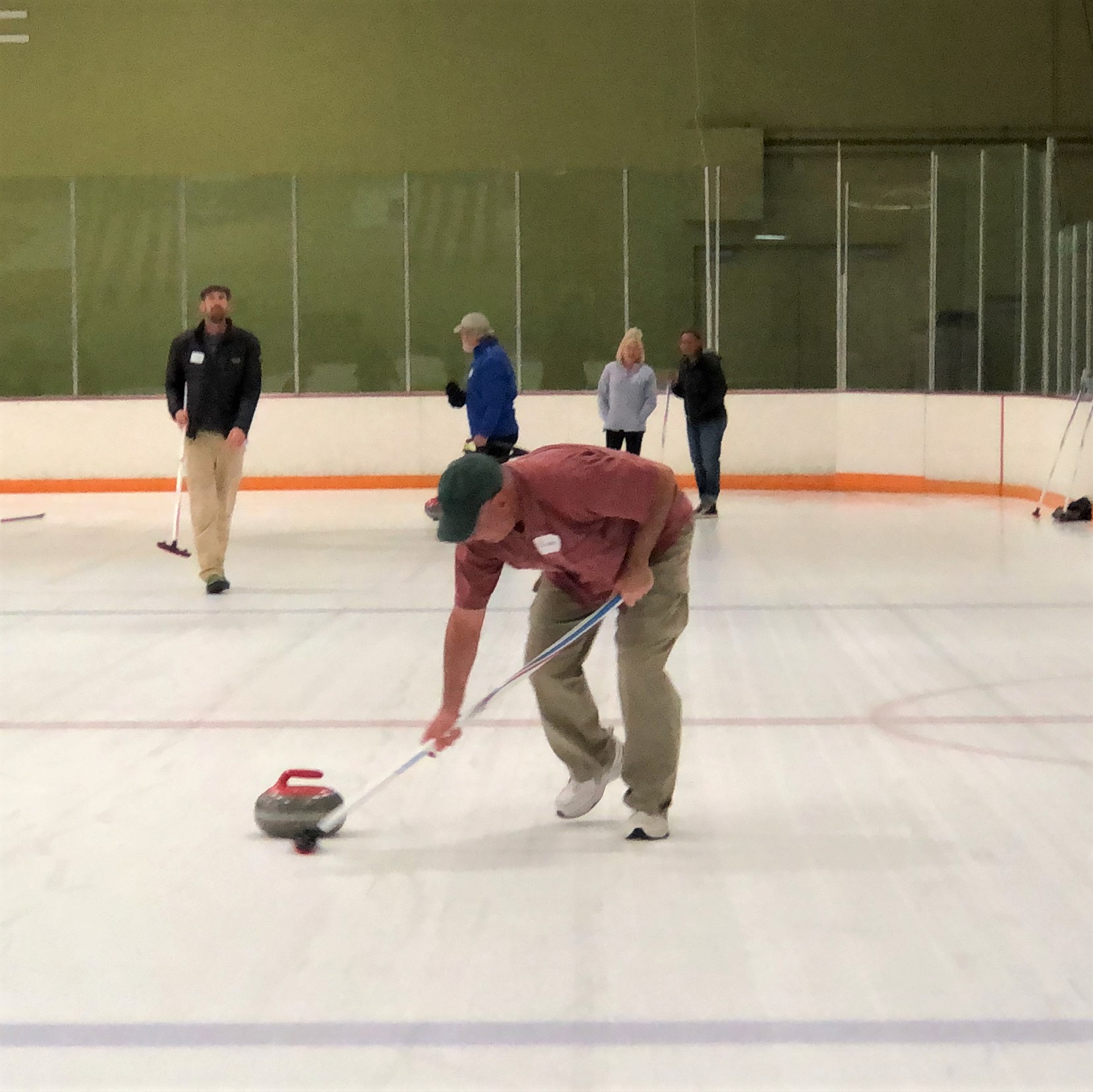 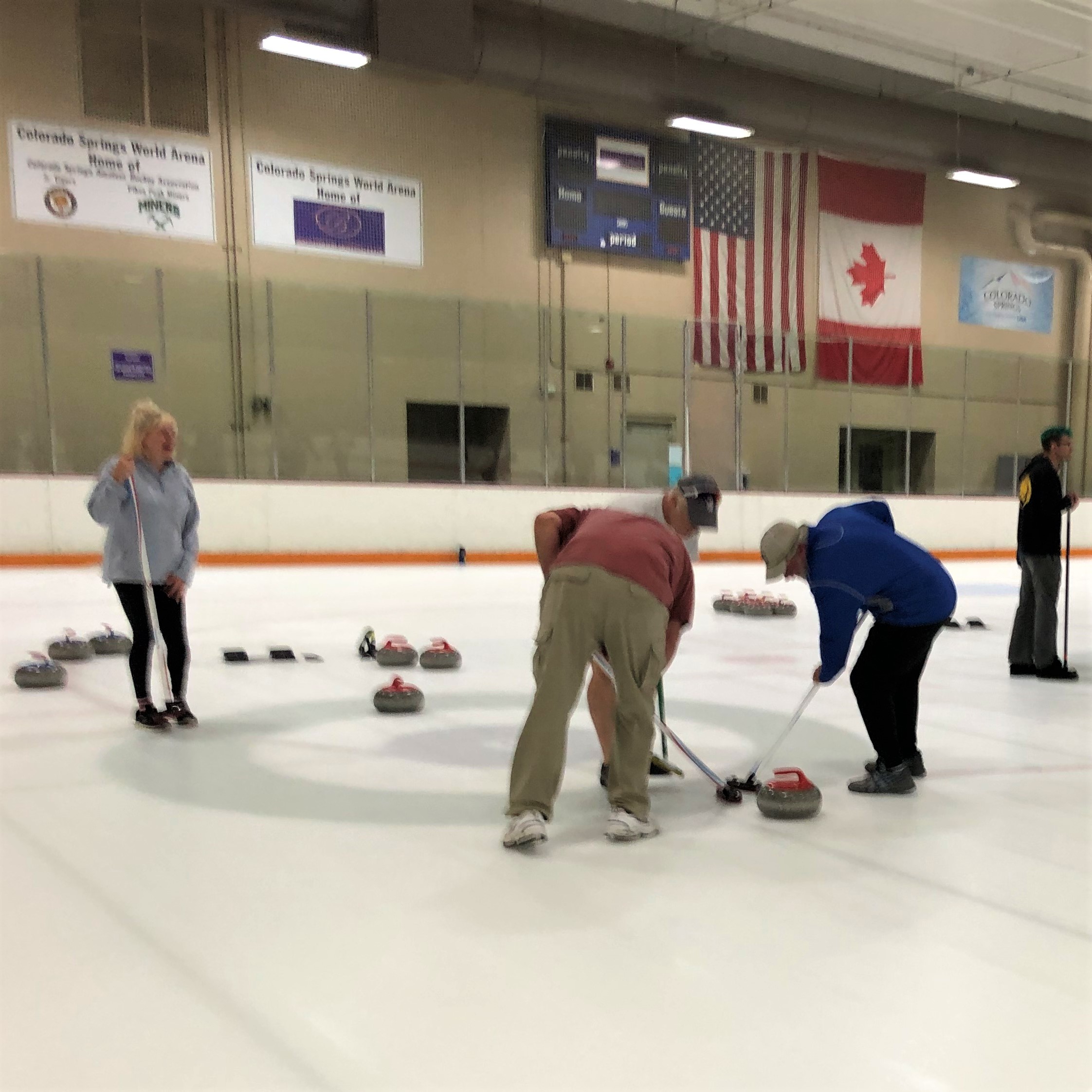 The curling sheet is 146 feet long. There’s a target on each end which is called a house. The small circle in the center of the house is called the button. Only one team scores per end. To begin with, the skips from each team determine which stone is closes to the center of the button. They then count out from there to see how many stones that same team has in the house that are closer to the button than the nearest stone of the other team. We played four ends. In the first three, my team had two stones in the house that were closer to the center than any stones of the other team, so we scored two points in each of those ends. We had one stone closer in the fourth end, so we won the match 7-0. In this photo, the guy who taught the women is showing us how to score. He also gave us tips during the game. 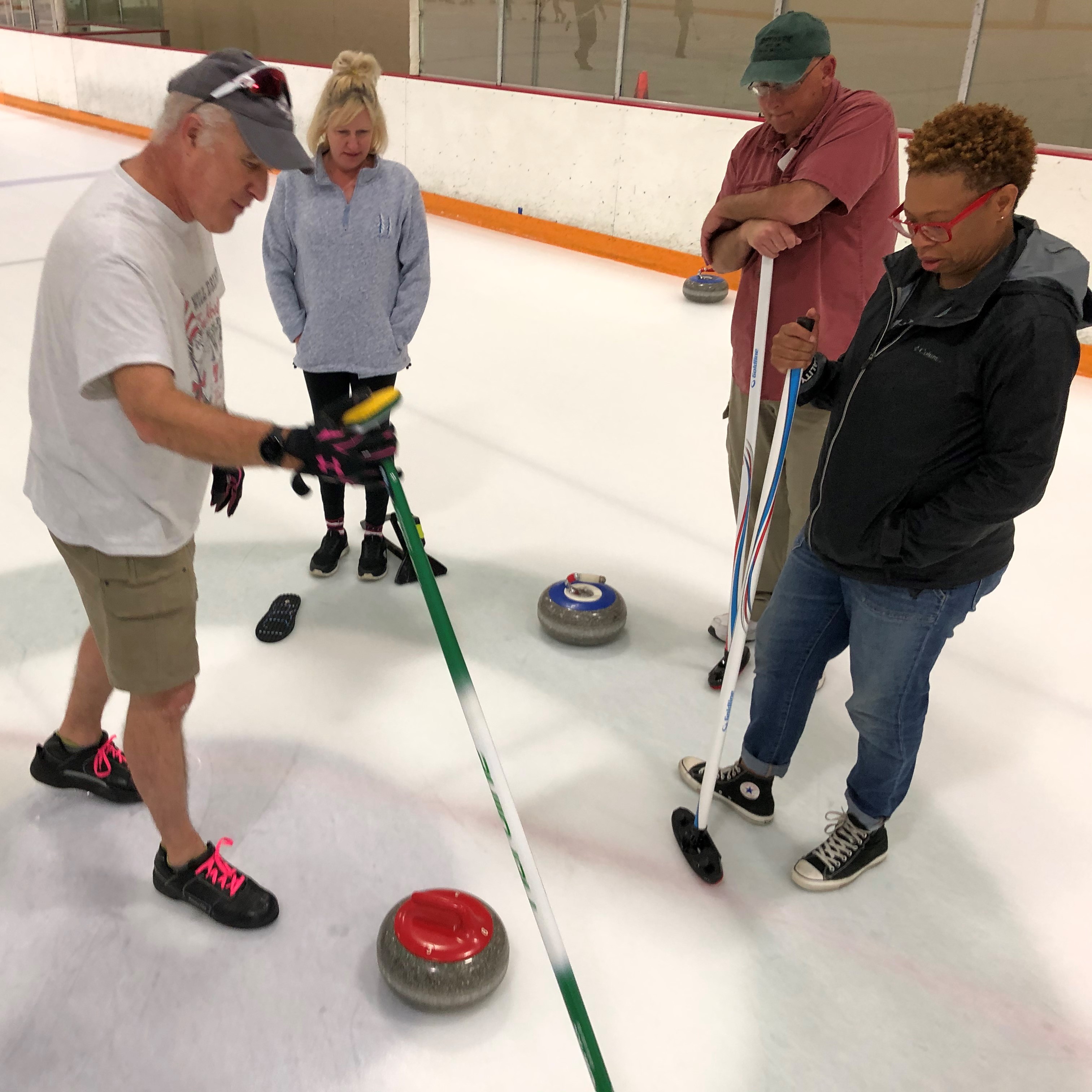 There were three friendly women on the other team. The main reason we beat them is that they weren’t at all consistent with the force they put behind their stones and many of them stopped short of the house and even of the hog line. Any stone that doesn’t cross the hog line is removed from play. Stones that cross the hog line but don’t make it into the house remain on the ice and work as blockers for future stones. Each player throws two stones. In a regulation match, there are four players on a team, but we only had three. 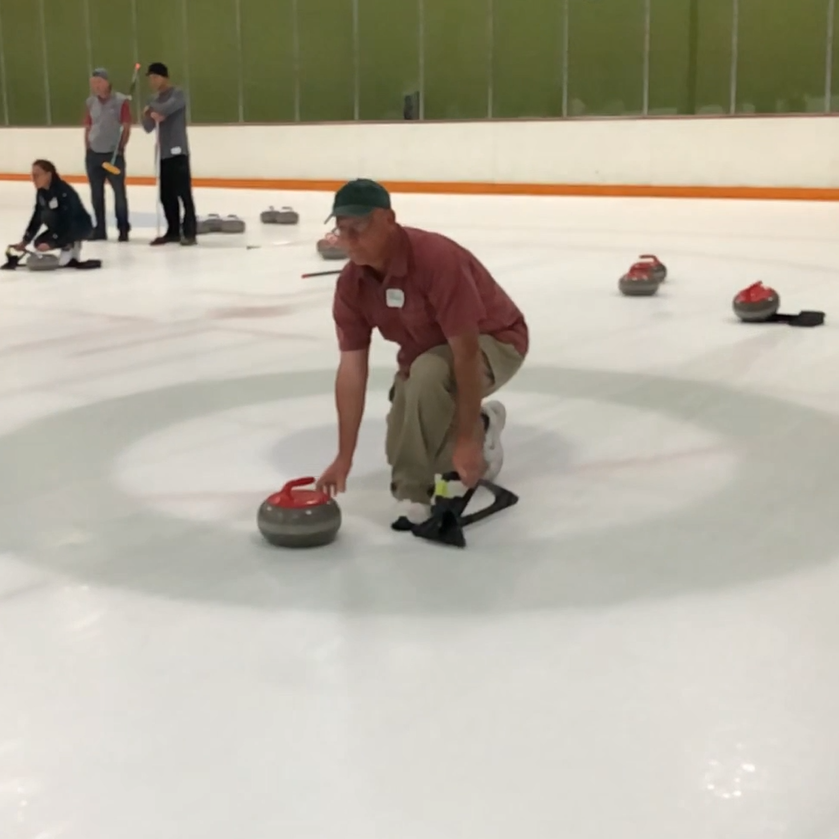 In our first end, both my stones went through the house. The two scoring stones were thrown by my friend. I’m not sure about the second end. The two scoring stones may have been his again, or one of them may have been mine. In the third game, both scoring stones were mine, and one of them actually landed right on the button. This happened to be the throw I filmed from the end of the rink behind me. You can see it on the video below. When my stone landed on the button, my friend raised his fist and yelled. We were told that curling protocol didn’t include celebration, but I could resist taking photo of me subtly pointing at my stone. 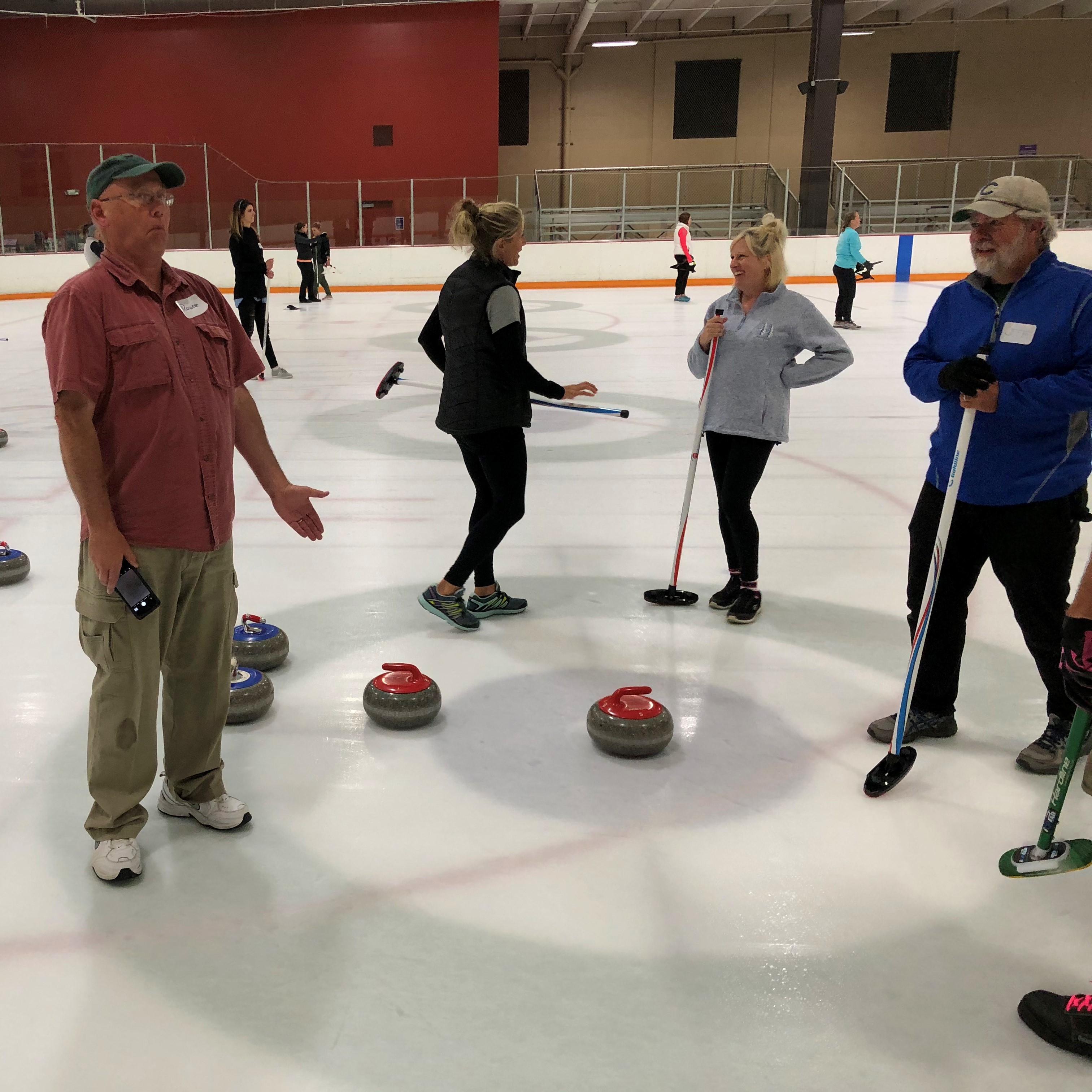 In the fourth game, our one point came from my stone that also landed on the button, but  this time it was knocked there by a stone thrown by the other team, so I’m not as proud of that one.

We were on the ice for two hours, and every moment of it was fun. Curling is very different from anything I’ve done before. It’s also an accessible game—the fact that I didn’t make a fool of myself was a big plus, along with the fact that I landed a stone on the button (although I realize that was as much luck as anything). I may even join a league sometime.

This entry was posted in Sports. Bookmark the permalink.