I first heard about this museum several years ago and figured I’d have to visit it quickly because it wouldn’t be around for long. I was a little bit surprised to discover it still existed. 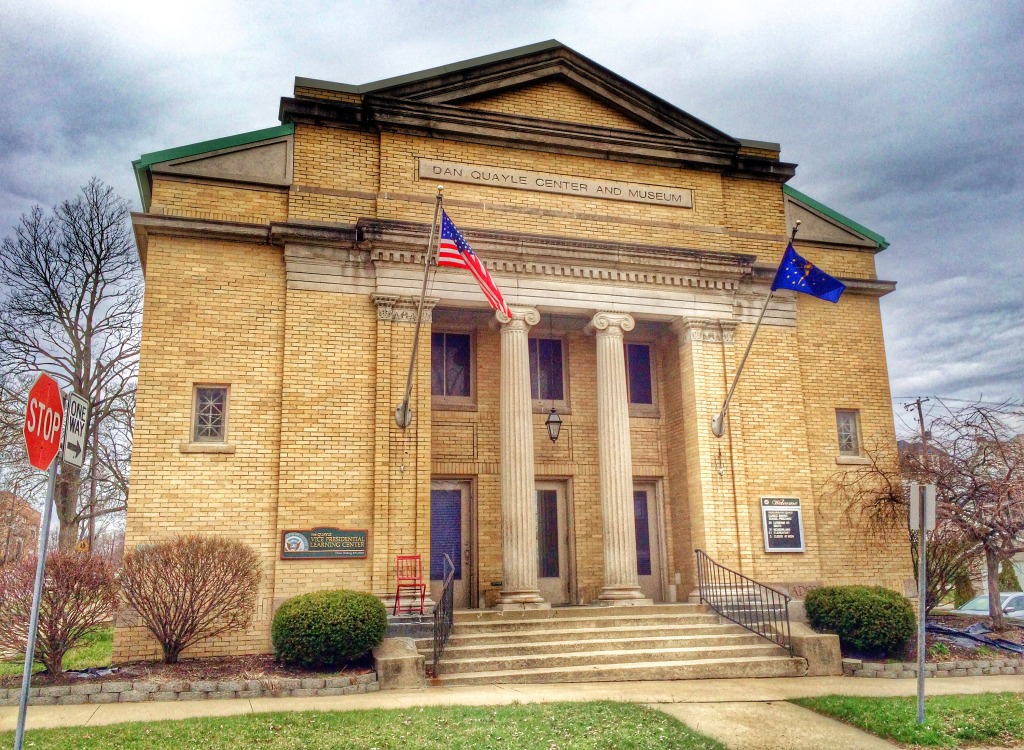 Dan Quayle is from Huntington, but there really isn’t a museum’s worth of stuff to say about him, so this soon became a museum about the five Vice-Presidents from Indiana. It has since morphed into a museum of all U.S. Vice-Presidents. It advertises that it has something from each Vice-President, although for most of the first 20 or so, the “something” is a newspaper clipping that mentions him.

I enjoyed the museum.  The displays around the wall included a photo, a small board with pertinent information and the occasional interesting bit, and various artifacts related to each Vice-President — enough to be interesting and informative without being boring. 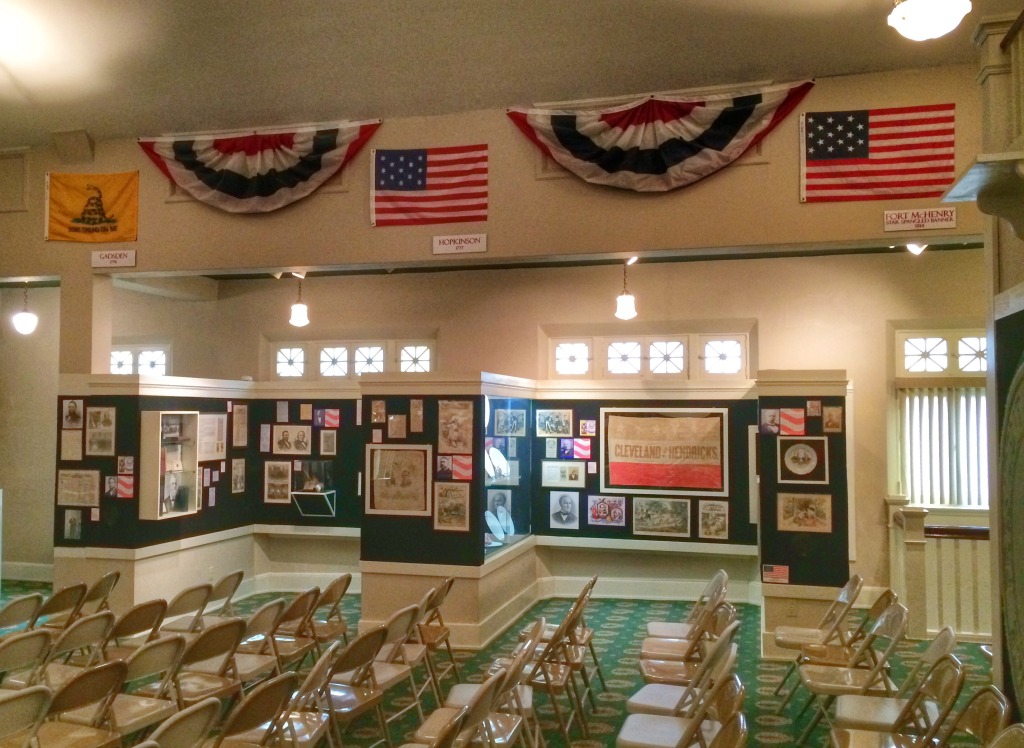 I struck up a conversation with the curator. He said the museum is thriving and will soon be moving into new, larger quarters at a local university. The reason for the success is that he’s targeted school groups. In fact, the museum often closes to the public because so many field trips are coming through. The guy kept talking about it in the first person — “I have items from each Vice-President …” I asked him about this, and he said he’s the only employee. It’s obviously his passion and he does a good job with it. Much of his collection was donated by people who find stuff and don’t know what to do with it. Here are some random bits:

Mention of Elbridge Gerry’s death. Gerry served under Madison and his policies gave us the term “Gerrymander.” 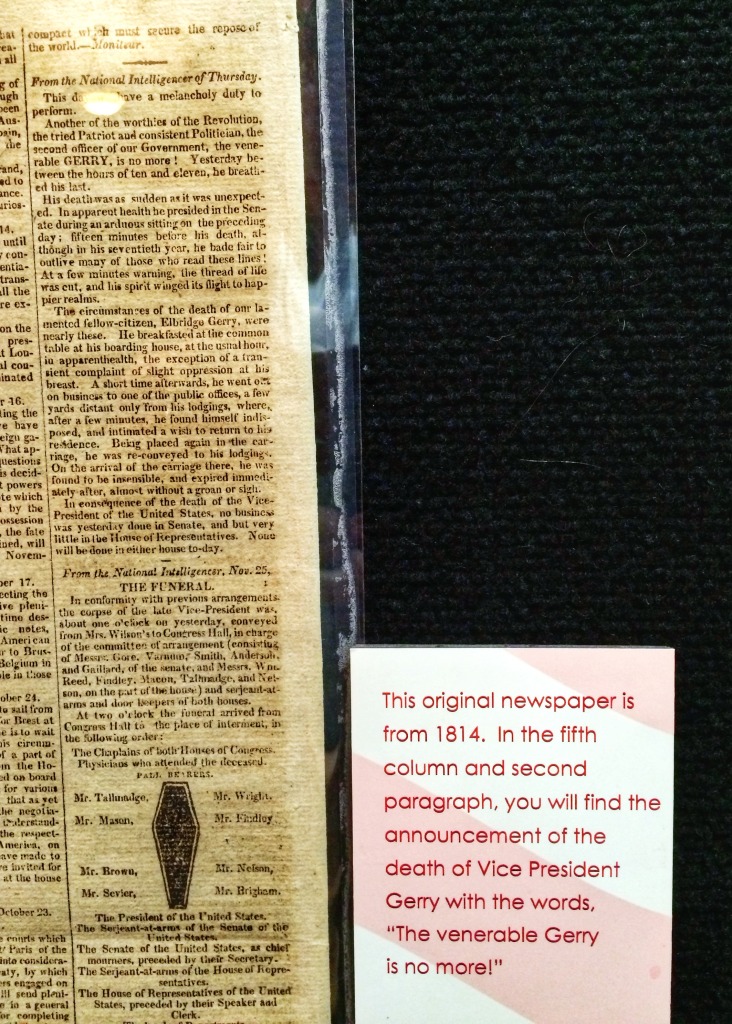 A newspaper that mentions the permission given to Pierce’s V.P., William R King, to take the oath of office outside the United States. He remains the only President or V.P. to have done this. 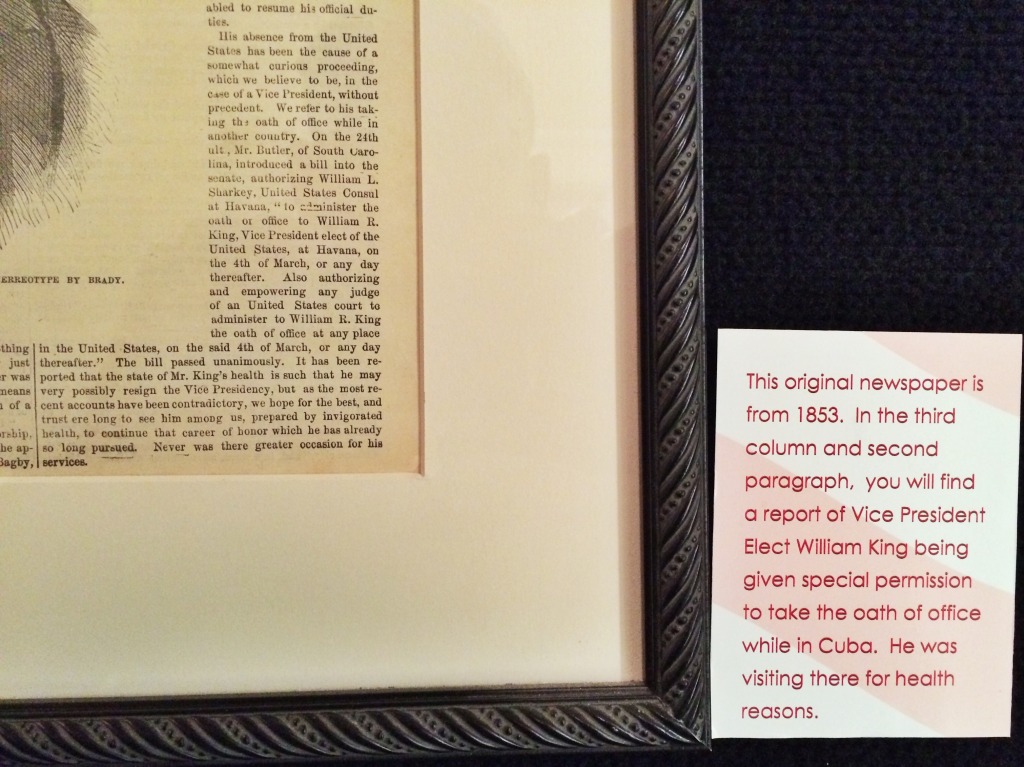 A political cartoon of Hannibel Hamlin, Lincoln’s V.P. in 1860. 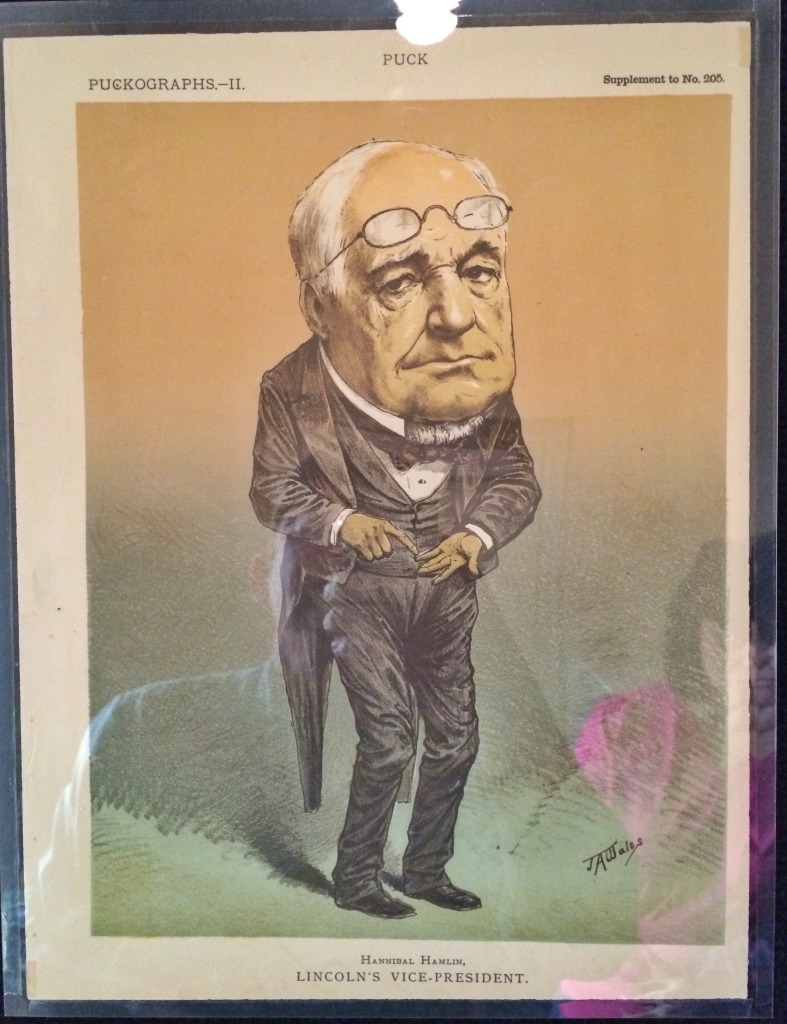 A local vote tally sheet from the election of Grant and his first Vice-President,Schuyler Colfax, in 1868. 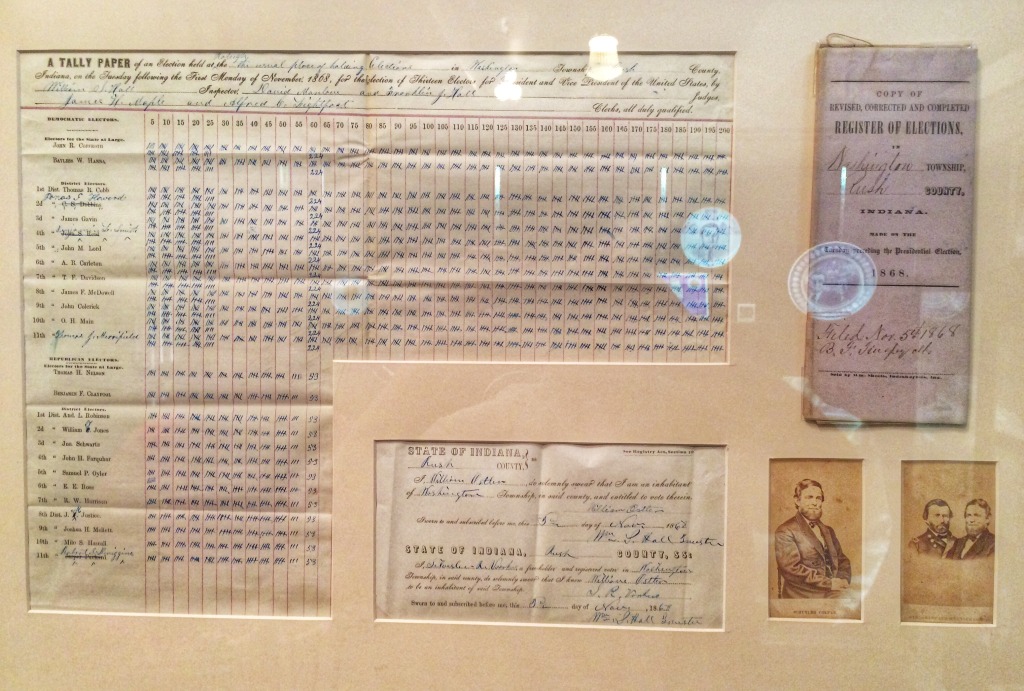 A campaign handkerchief from 1880 with James Garfield and his Vice-President Chester A. Arthur, who became President when Garfield was assassinated. 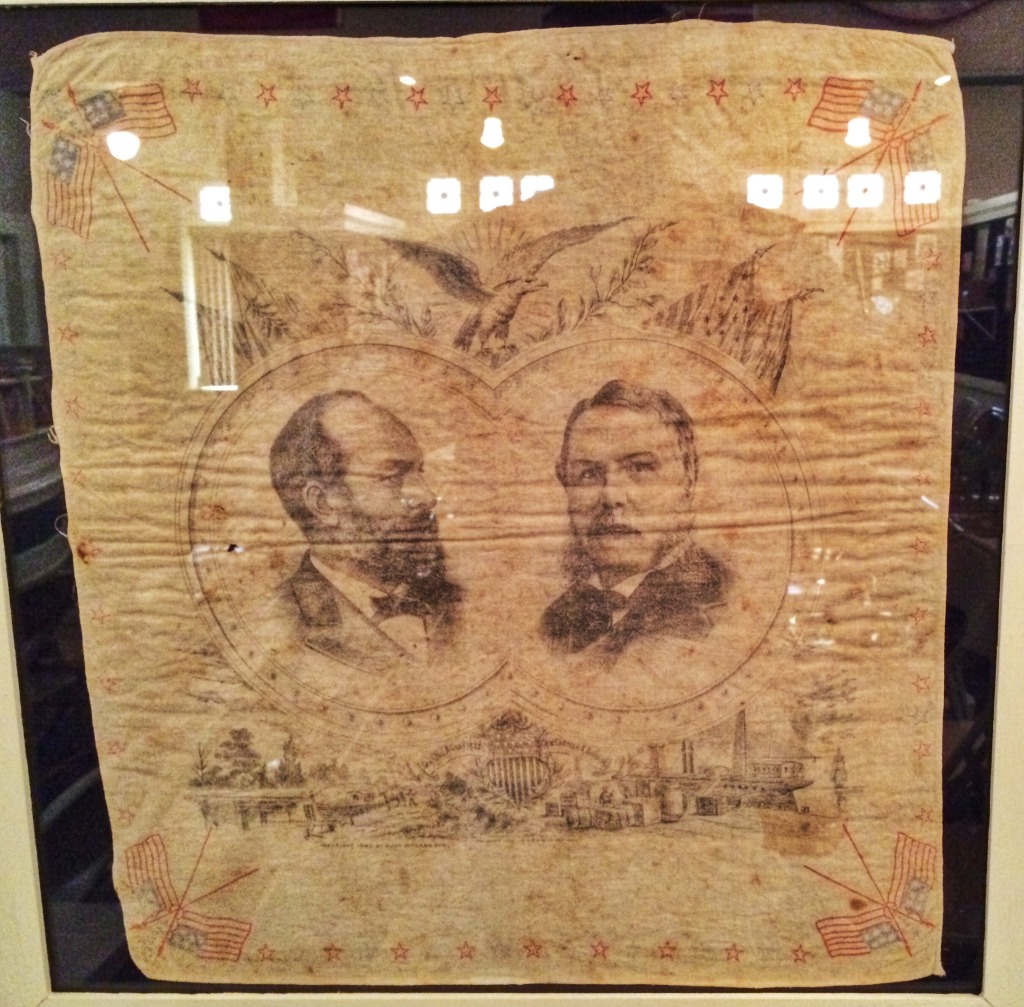 Campaign banner (1884) from Cleveland and Thomas Hendricks, his Vice-President during his first term. 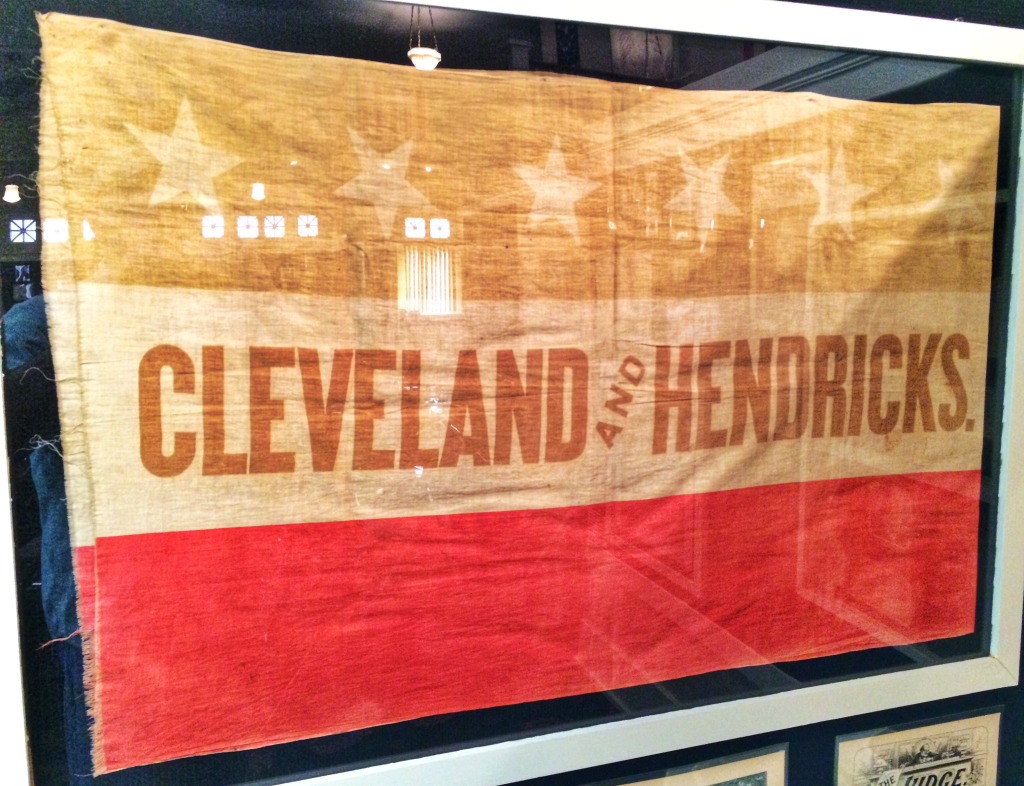 A handkerchief from the campaign of 1888, with Harrison and his V.P., Levi P Morton. 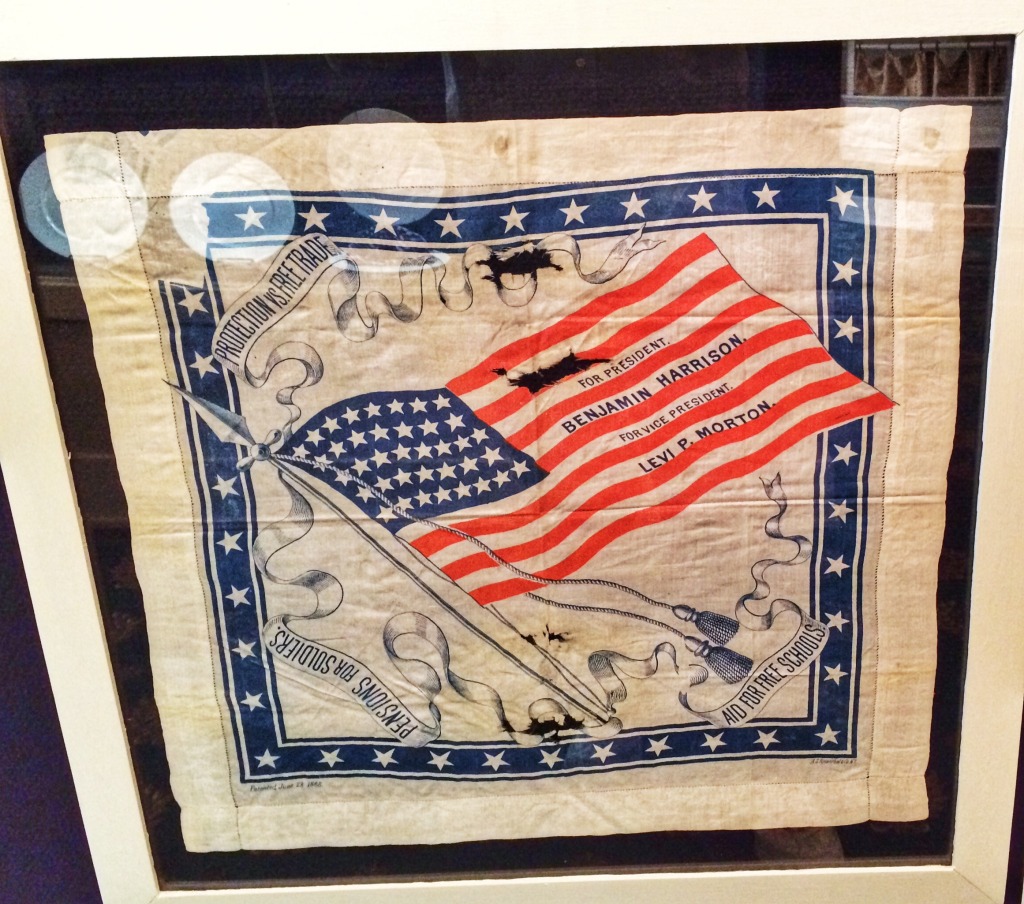 And a plate showing Cleveland and his second Vice-President, Adlai E Stevenson from 1892. 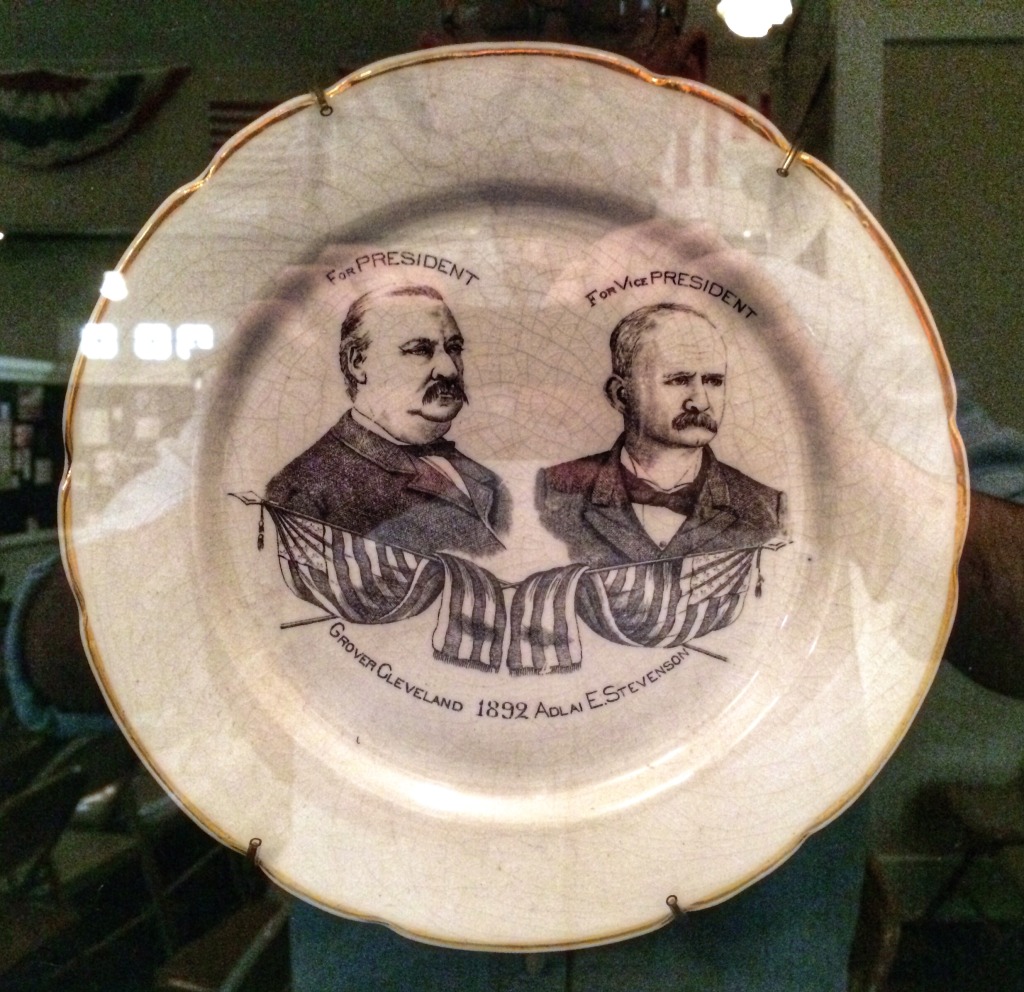 A thank you note from Garret A Hobart, McKinley’s Vice-President during his first term. 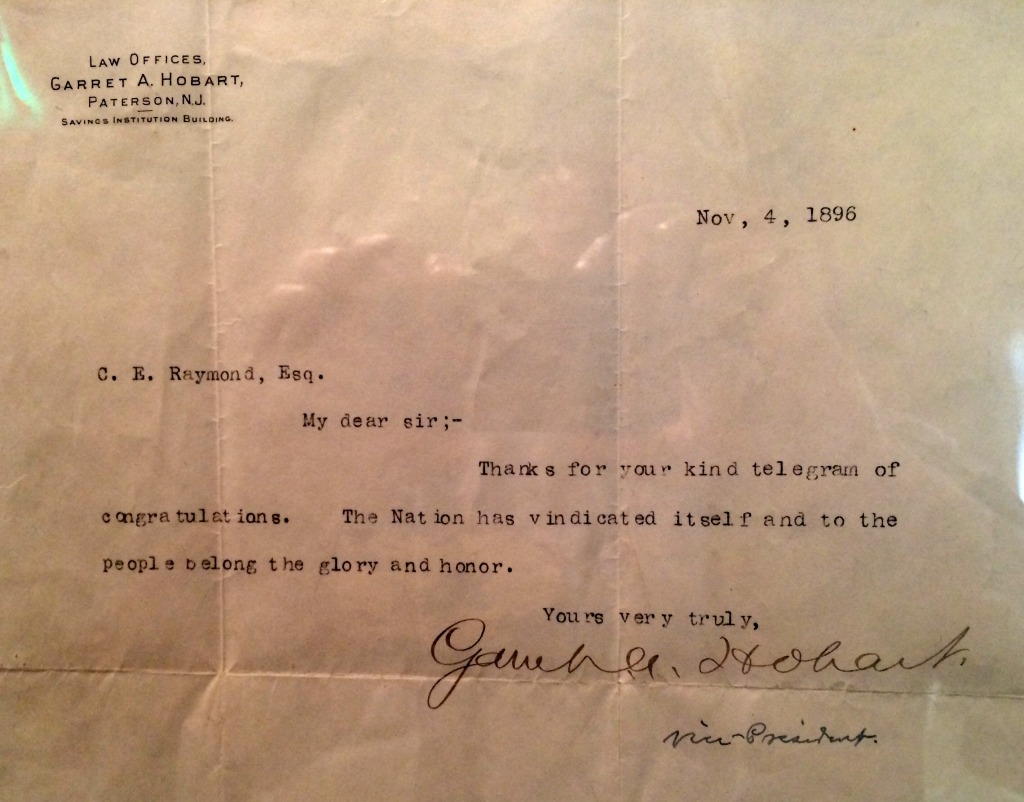 And ribbons from McKinley’s second campaign with Teddy Roosevelt as his V.P. 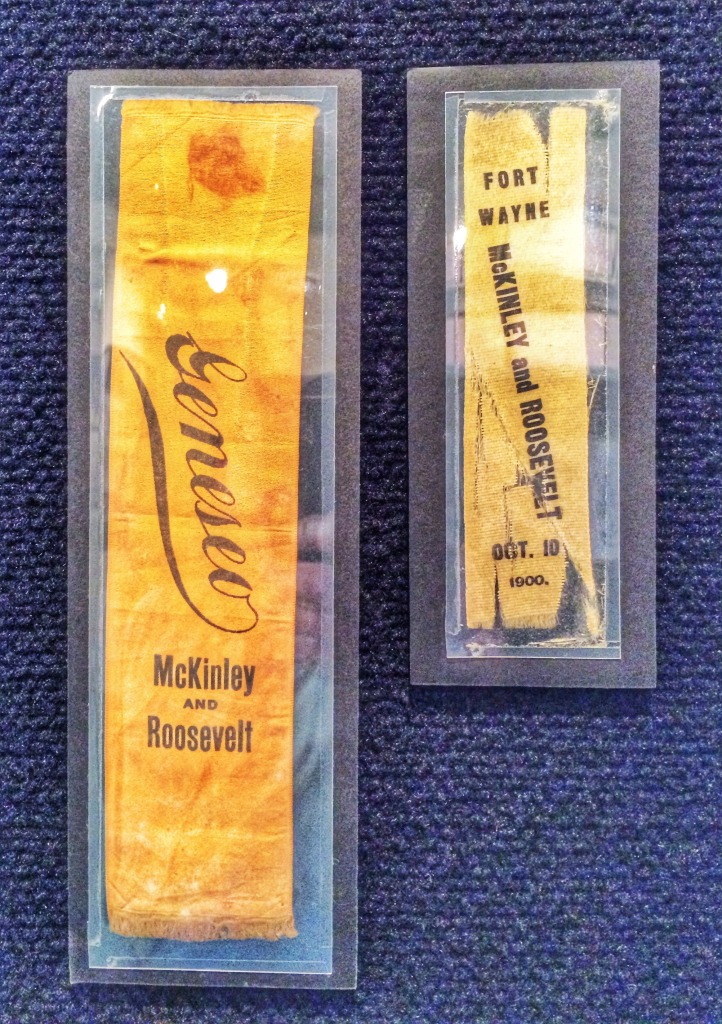 A magazine cover from 1904 with Teddy Roosevelt and his V.P., Charles W Fairbanks, after whom the city in Alaska was named. 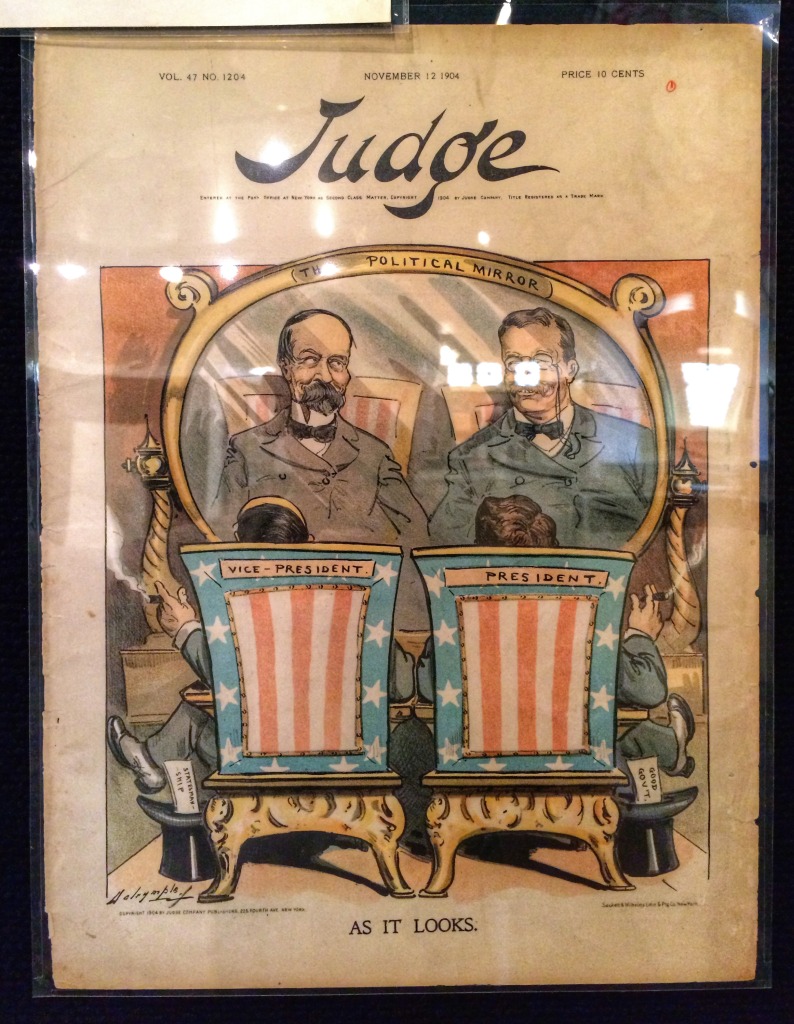 Campaign dinnerware from 1908 with Taft and his V.P., James S Sherman. 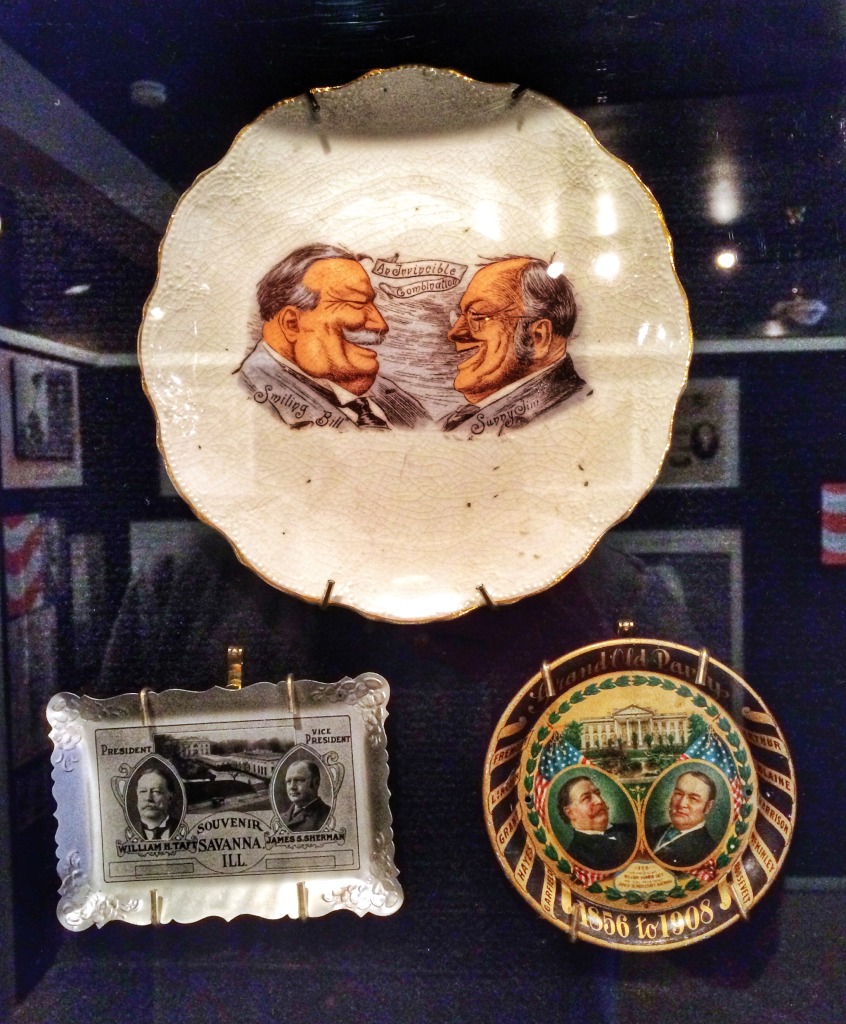 Cartoon of Wilson and his V.P. Thomas R Marshall, from 1916, I believe. 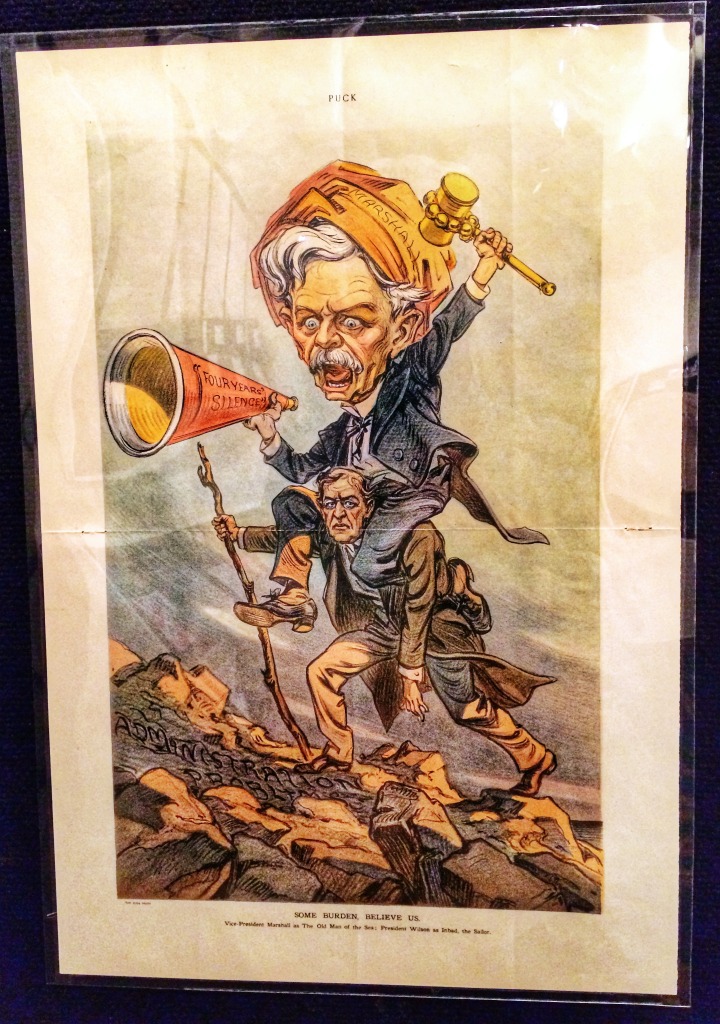 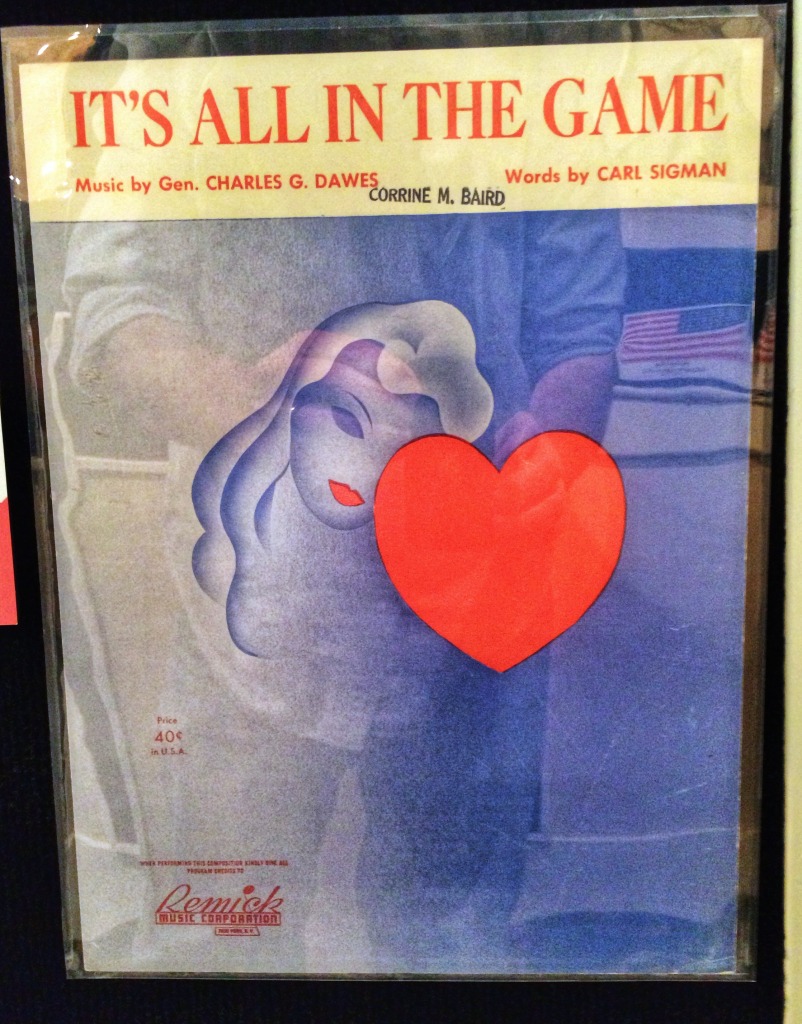 A letter from Franklin Roosevelt’s second V.P., Henry A. Wallace, just before he was replaced by Harry S Truman. 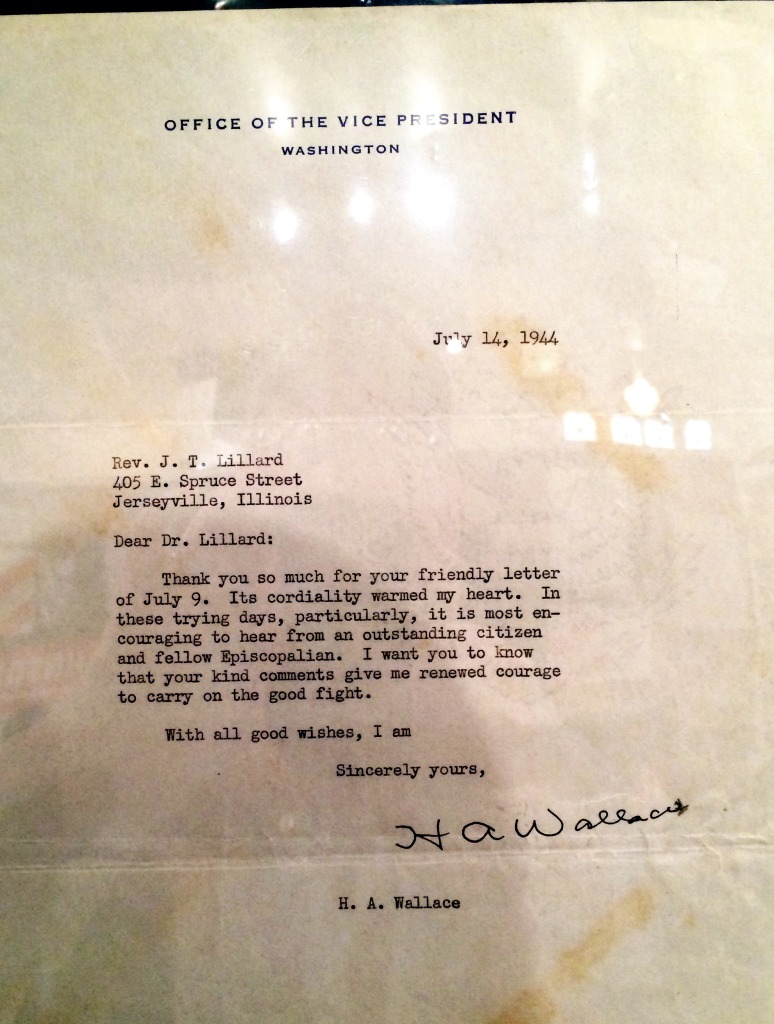 A plate from the campaign of Eisenhower with his V.P., Richard Nixon. 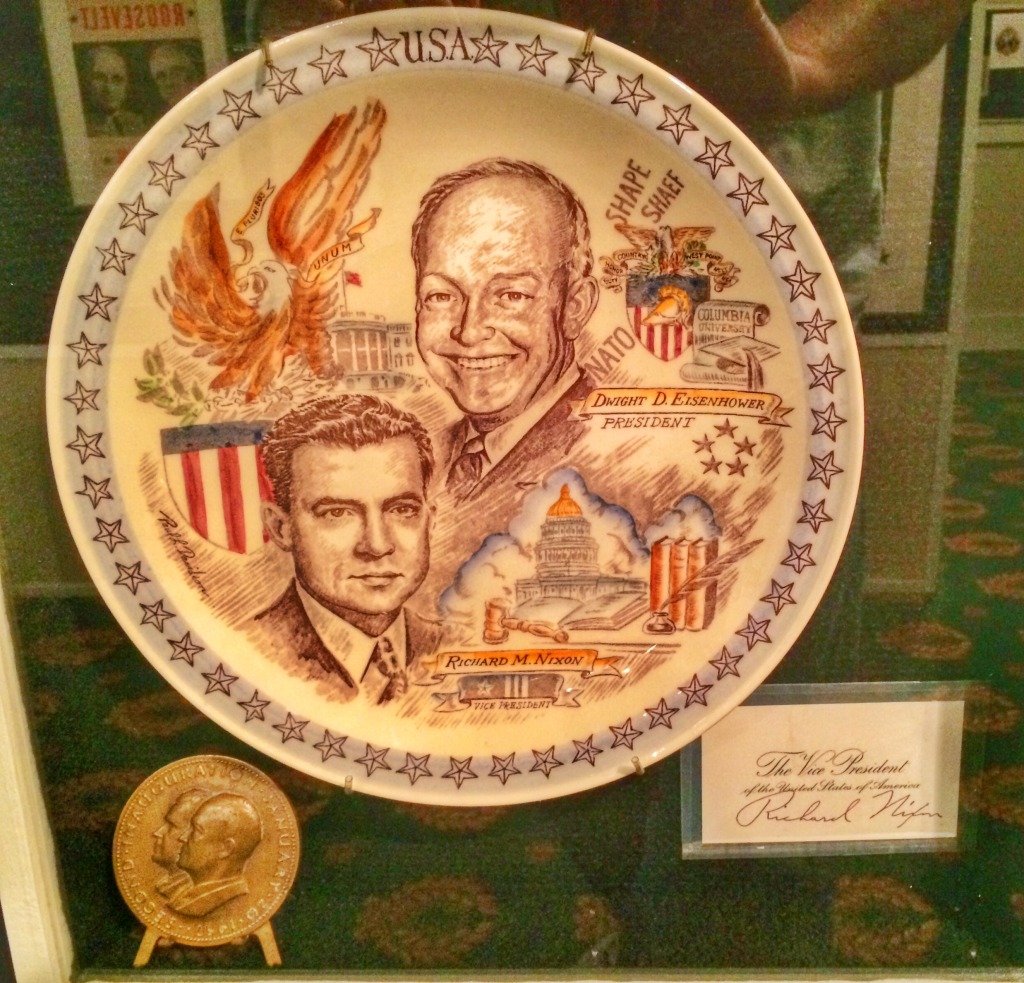 Until the 1960s, there was no process in the Constitution for replacing a Vice-President if the President died and the sitting V.P. became President. Because of this, at times in U.S. history there was no V.P. This letter is regarding the legislation that finally corrected that. Gerald Ford was the first V.P. chosen under the new system. 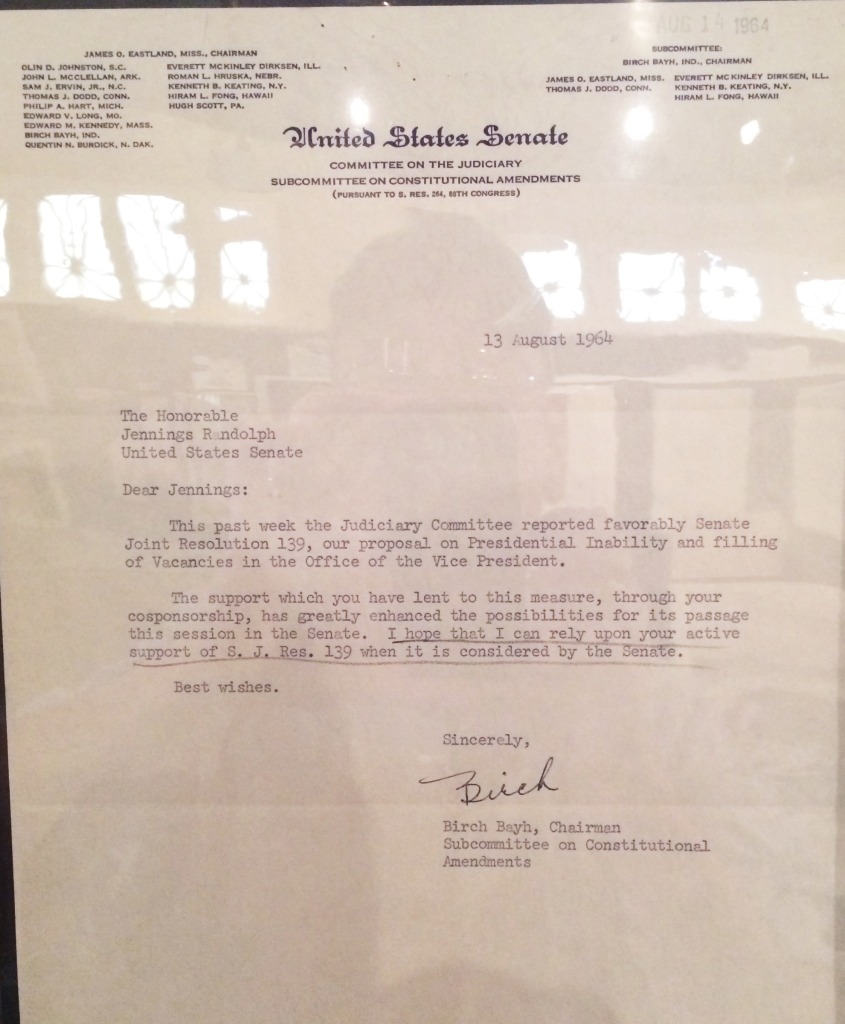 An assortment of items, including several of Spiro T. Agnew,  Nixon’s V.P., only the second V.P. to resign his office. The first was John C. Calhoun who resigned to join the Confederacy. 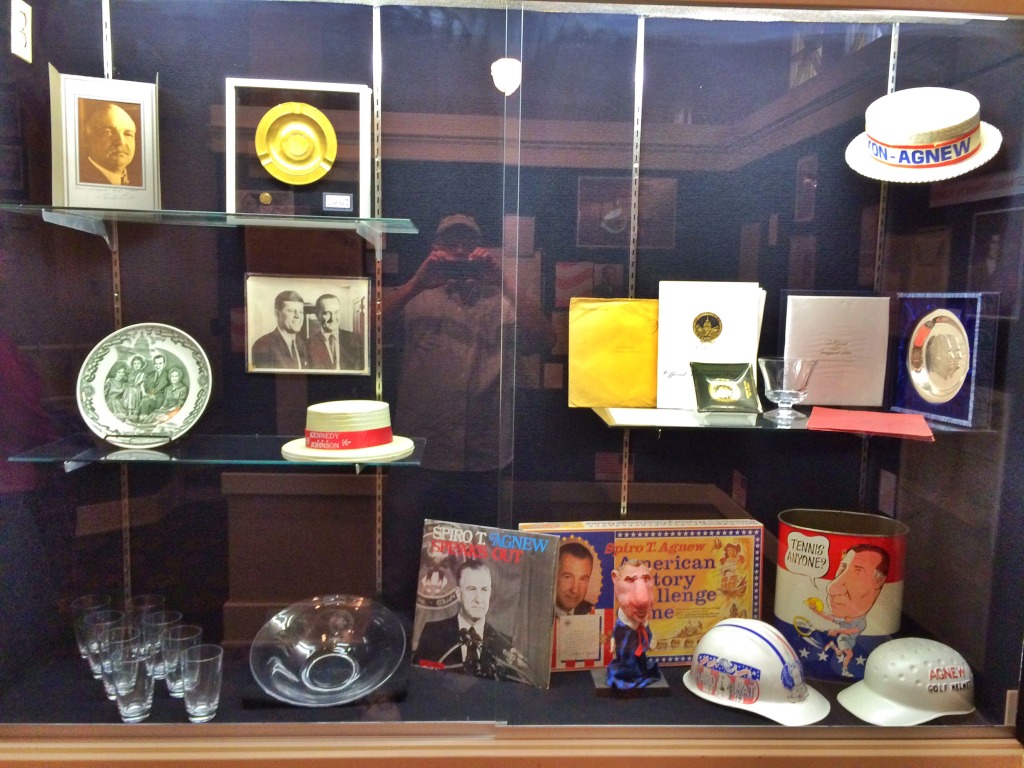 A commemorative envelope of the appointment of Nelson A. Rockefeller to be Ford’s V.P. in 1974. 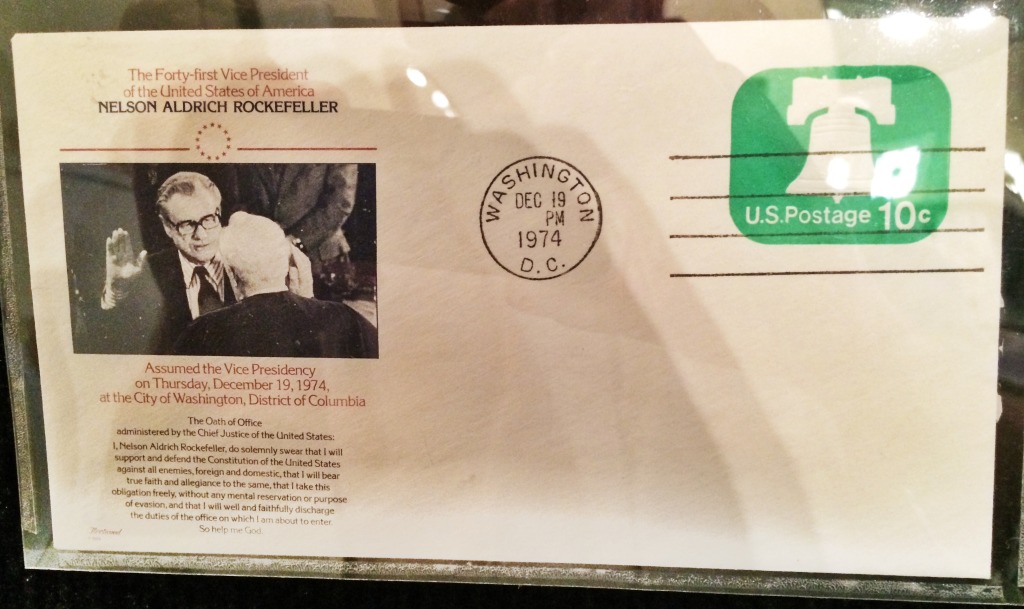 A larger (but not large) section at the end of the museum focused on Dan Quayle. 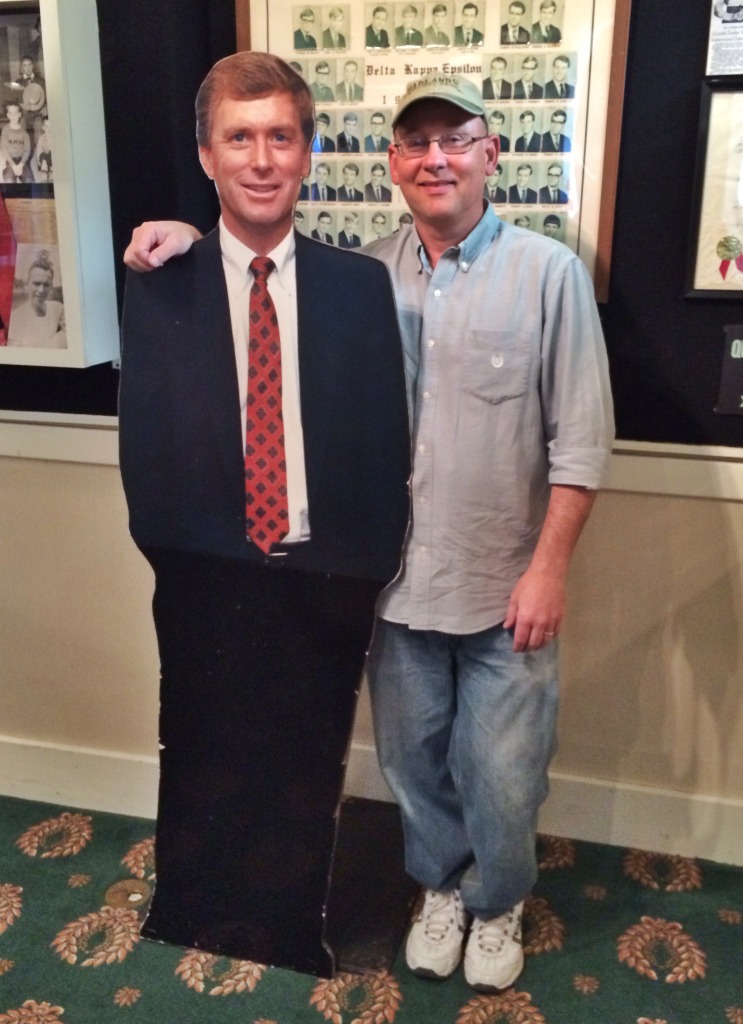 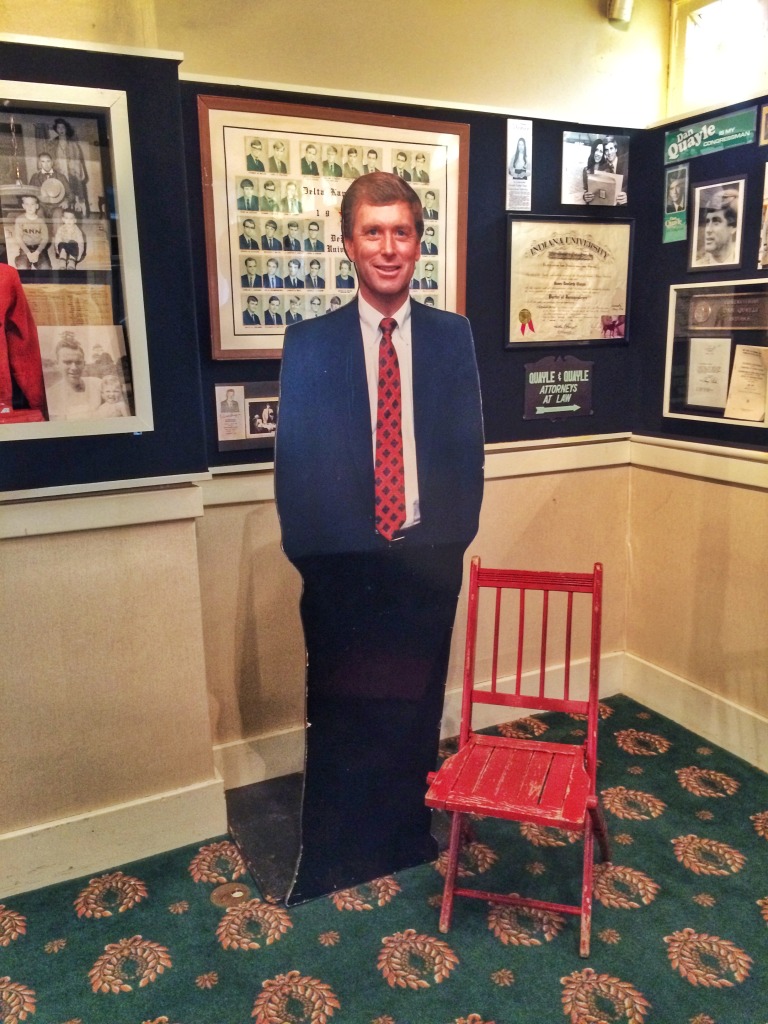 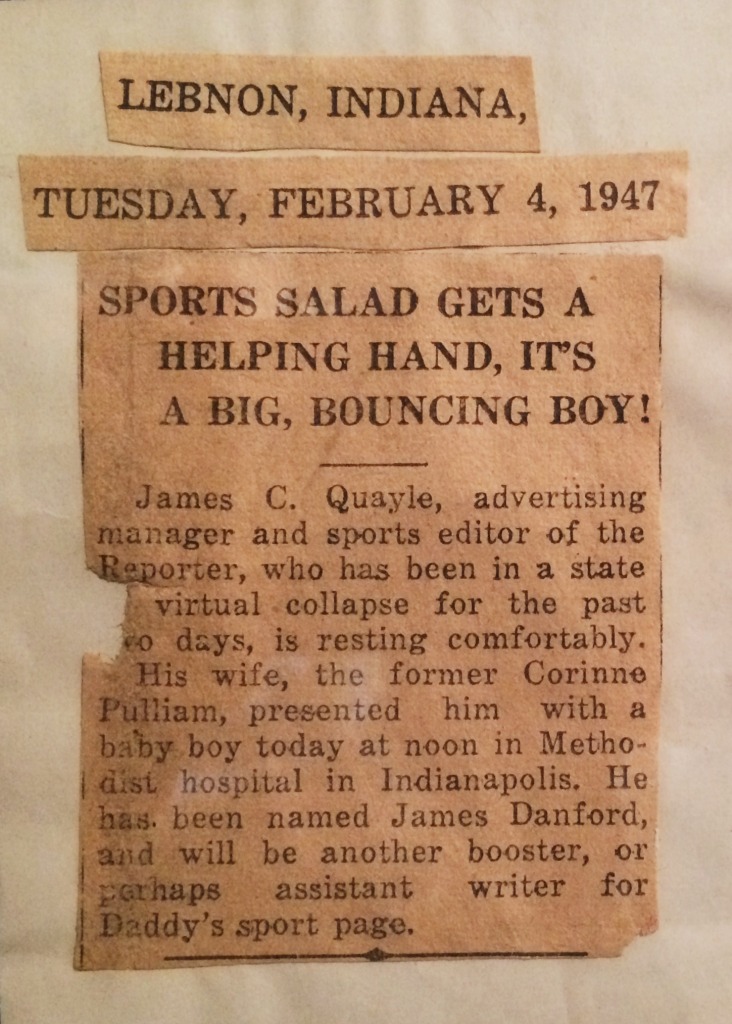 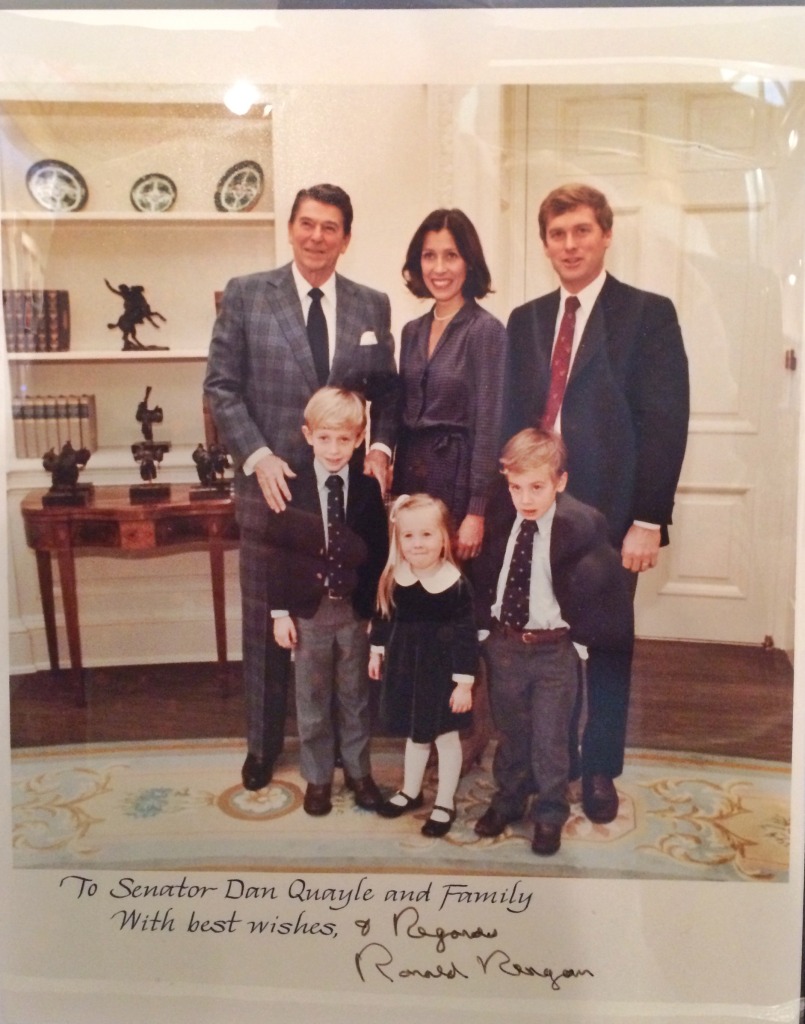 Chair from, and picture of Quayle at, Nick’s Kitchen (see previous post). 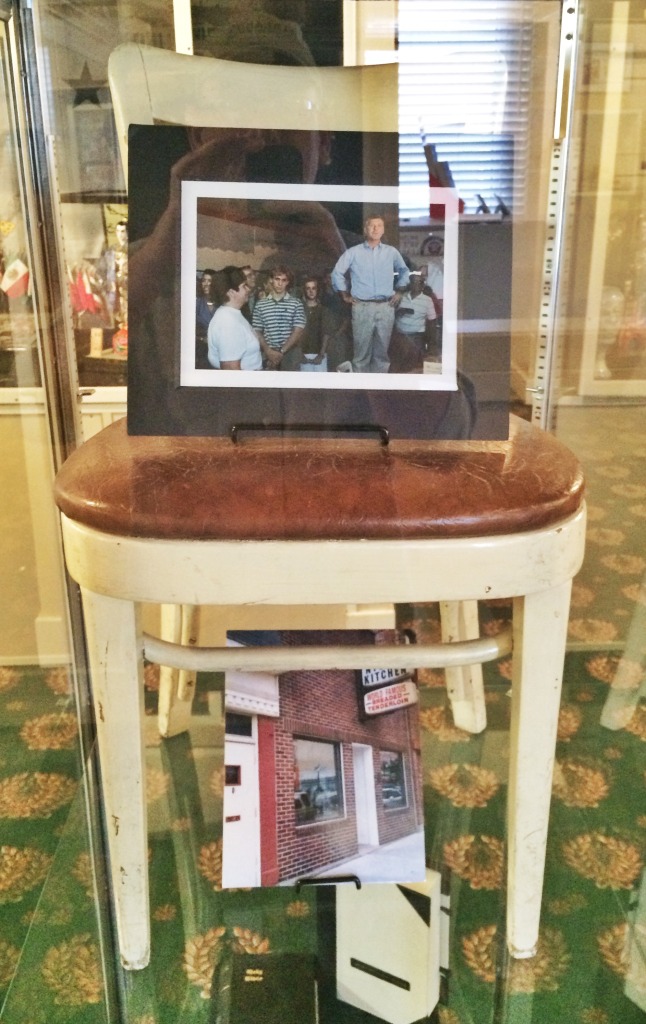 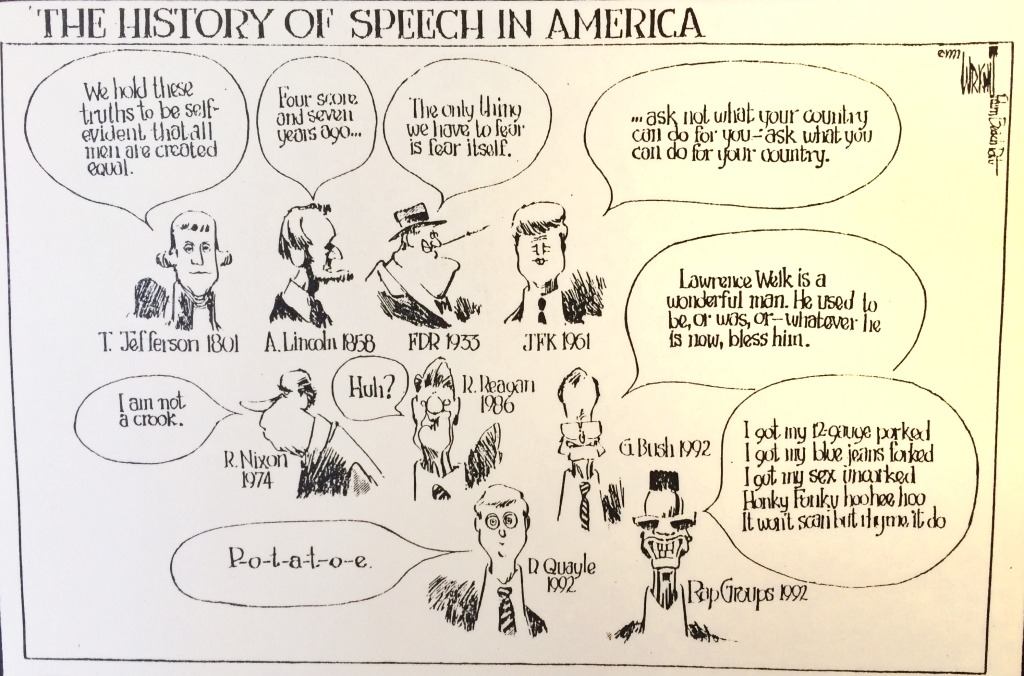