The Colorado section of Dinosaur National Monument doesn’t have any dinosaurs. It doesn’t have a lot of visitors either. For the four hours we were in the park, we probably saw eight other vehicles (not counting park vehicles or the three ambulances that were rushing into Echo Park as we were driving out).

The afternoon was hot, but a breeze and low humidity kept it from being oppressive as long as we didn’t just stand still in the sun. I asked a ranger in the visitor center how we could see the famous Steamboat Rock, a narrow, high peninsula formed by a bend in the Green River. She showed me the road on a map, but she urged us not to take it unless we had a car with high clearance.

We drove north along the paved road, stopping at all the overlooks. It’s certainly a beautiful area—with red and white cliffs and green sage plains and pinyon/juniper woods.

At one of the stops, I saw a Black-throated Gray Warbler, the first I’ve seen on its summer habitat (rather than in migration).

We were in no hurry. At a few of the northernmost stops, we could look down on Steamboat Rock and Echo Park. The yellow arrow in the photo below points to the rock. The red arrow points to three cottonwood trees that serve as a point of reference for later in my story. 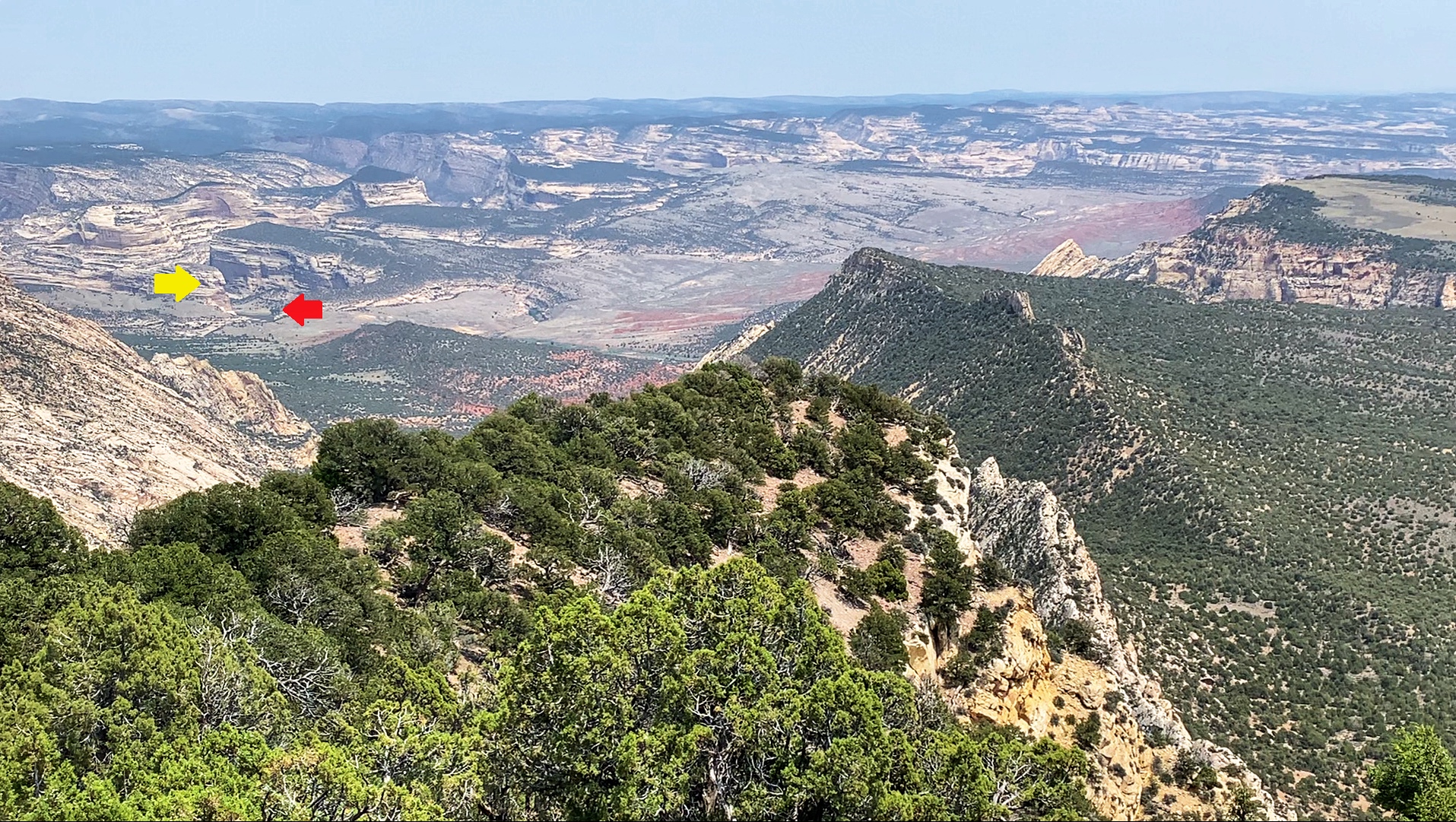 Here’s a zoomed look at the rock and the trees. 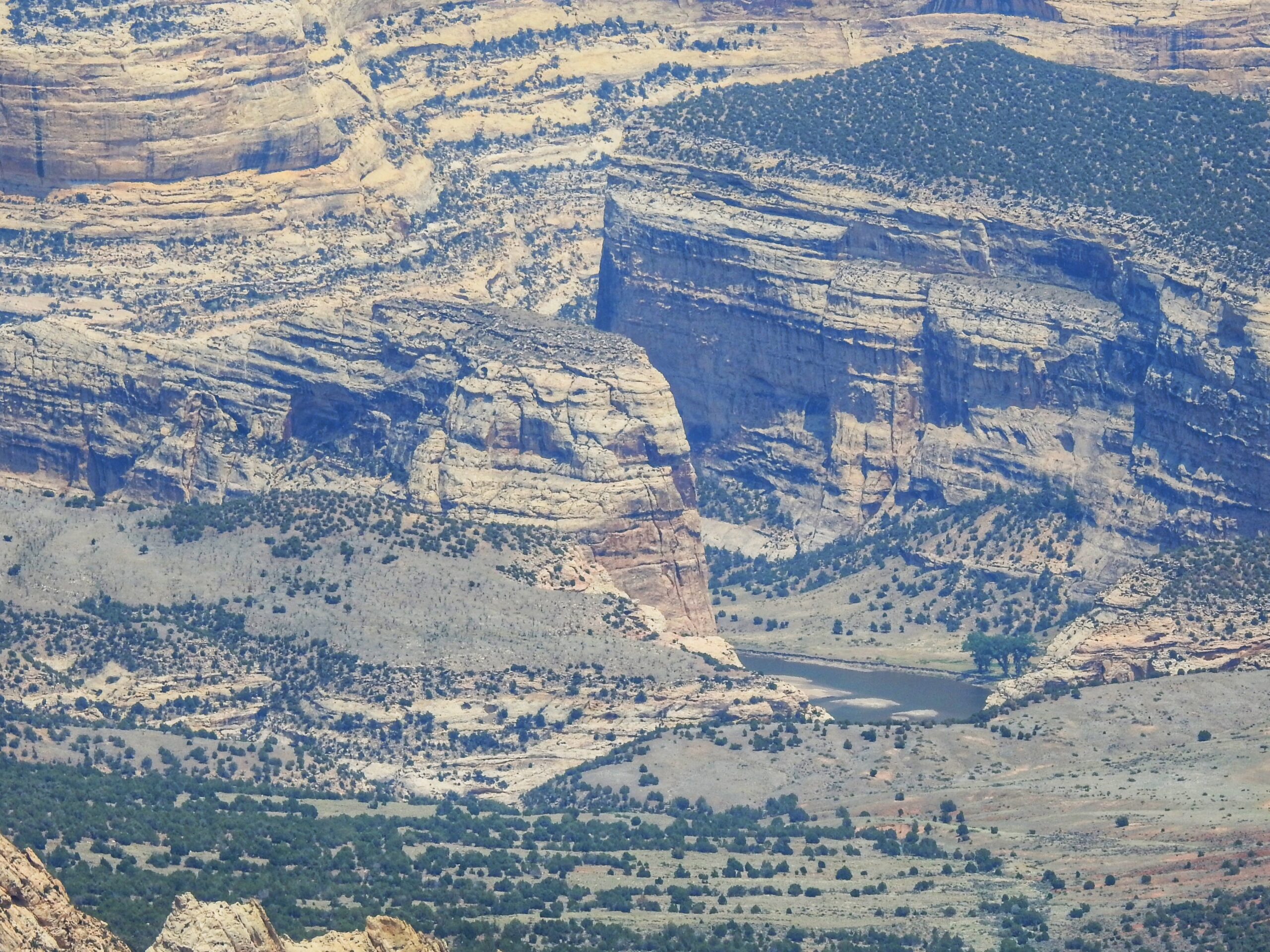 Impressive, but not the look I was hoping for. I decided to make the drive down. My wife was nervous about our car, but I promised that if we got to a place that was too rough, I’d turn around. As it turned out, the dirt road was steep and narrow, but well-maintained. There were maybe three places where I slowed to maneuver around holes or rocks, but even those places weren’t worrisome. The scenery was stunning, and the solitude made it even better. 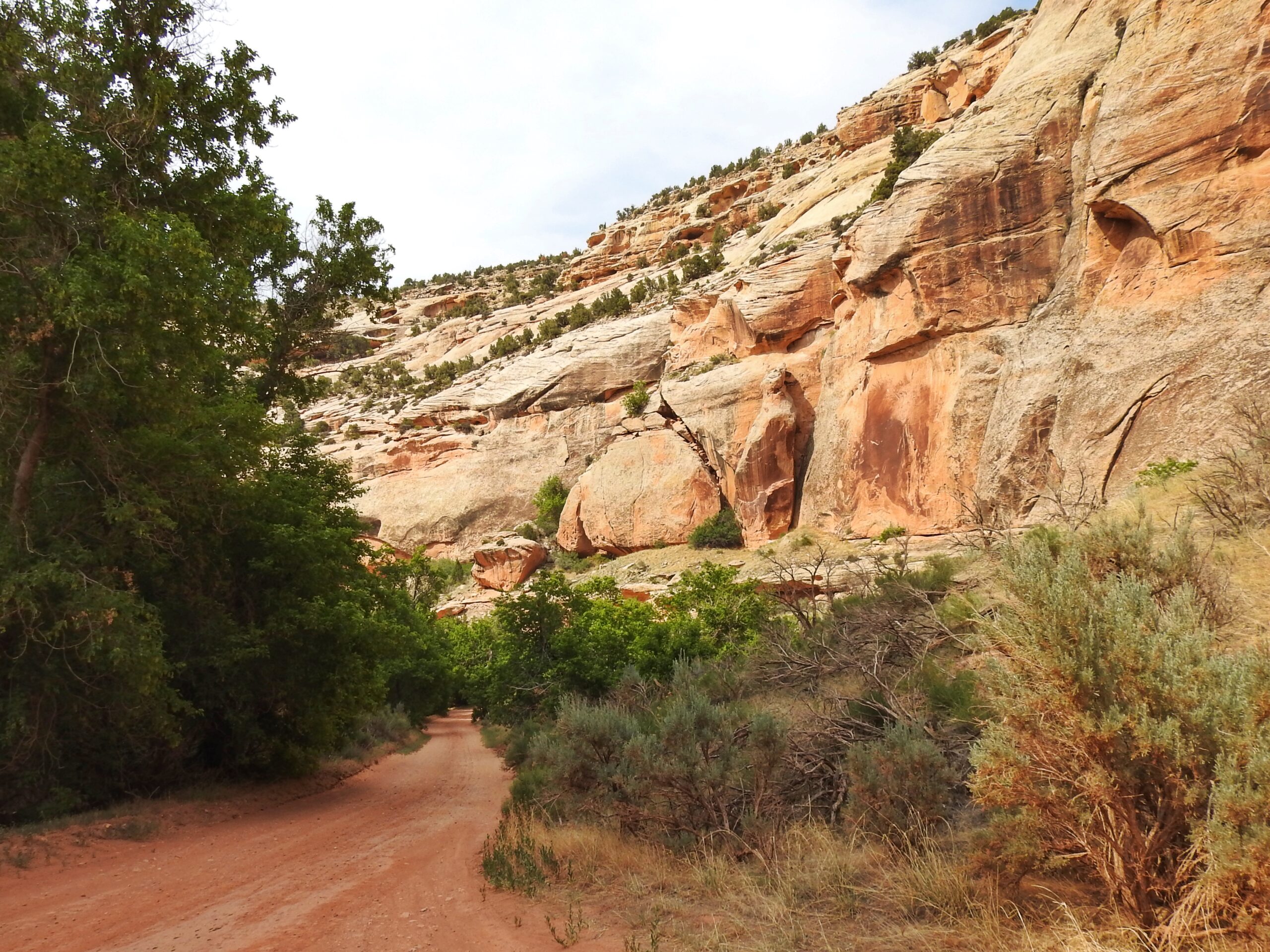 It was 12 miles from the paved road to Echo Park, and there wasn’t a foot of it that wasn’t beautiful. Free range cows were hanging out in the trees, and we’d occasionally get a quick glimpse of them as we drove by.

Here’s some video of our drive down into the canyon, seen through our bug-splattered windshield. 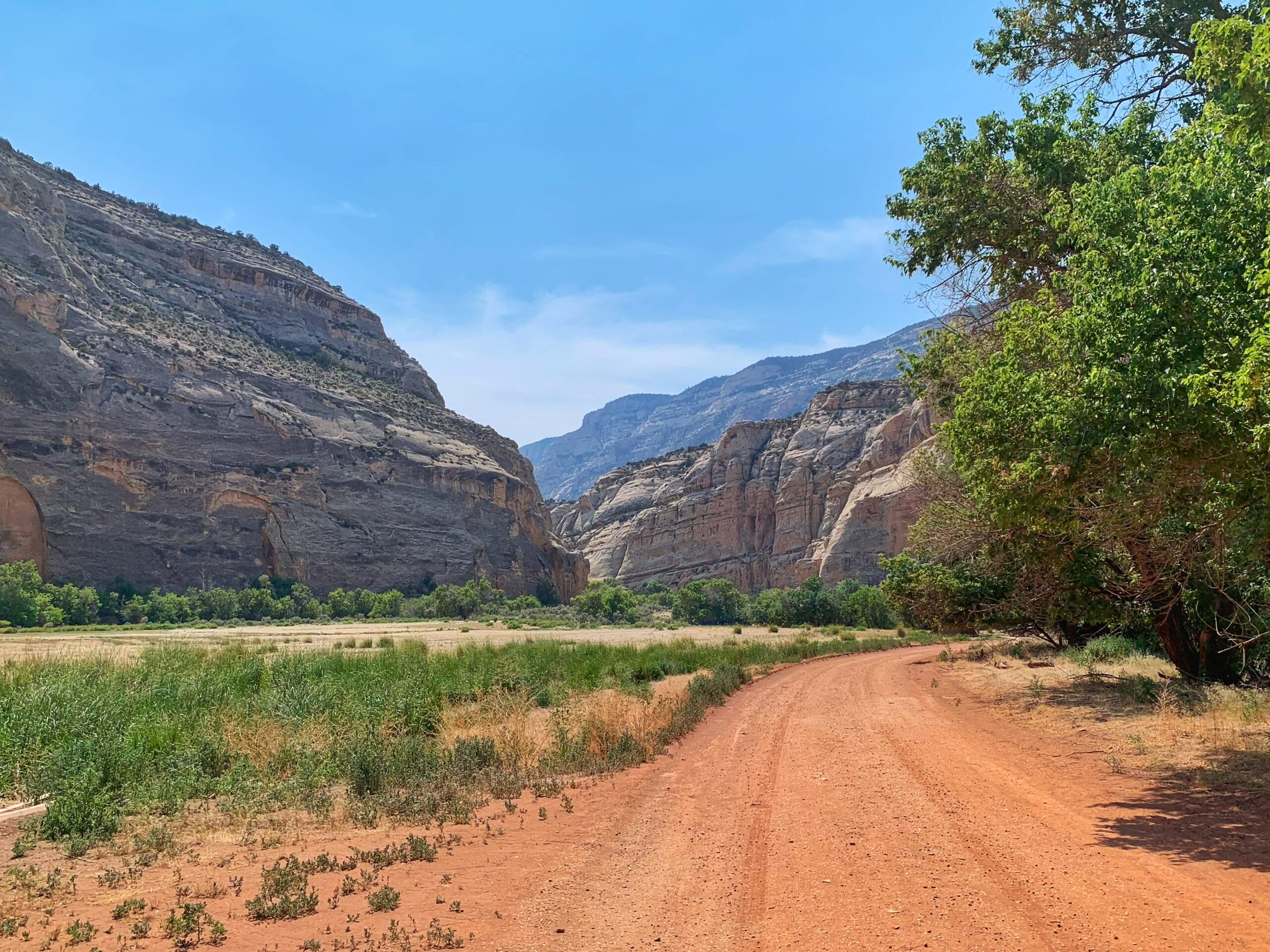 Even the park itself wasn’t crowded. Maybe half a dozen people were camping in the campgrounds. A large group of rafters came down the Green and pulled out in the park, but what little contact we had with them was pleasant. We parked and walked to the banks of the river to enjoy the view. And what a view it was. The Green River wraps around the rock. The Yampa River flows into the Green just to the east of where I took these photos. (It flows through the gap in the wall on the right in the second panorama.)

We weren’t in a hurry to leave, but it was hot standing in the sun. We walked about a quarter mile along the bank and stood in the shade of those three cottonwoods we’d earlier seen from the cliffs high above. 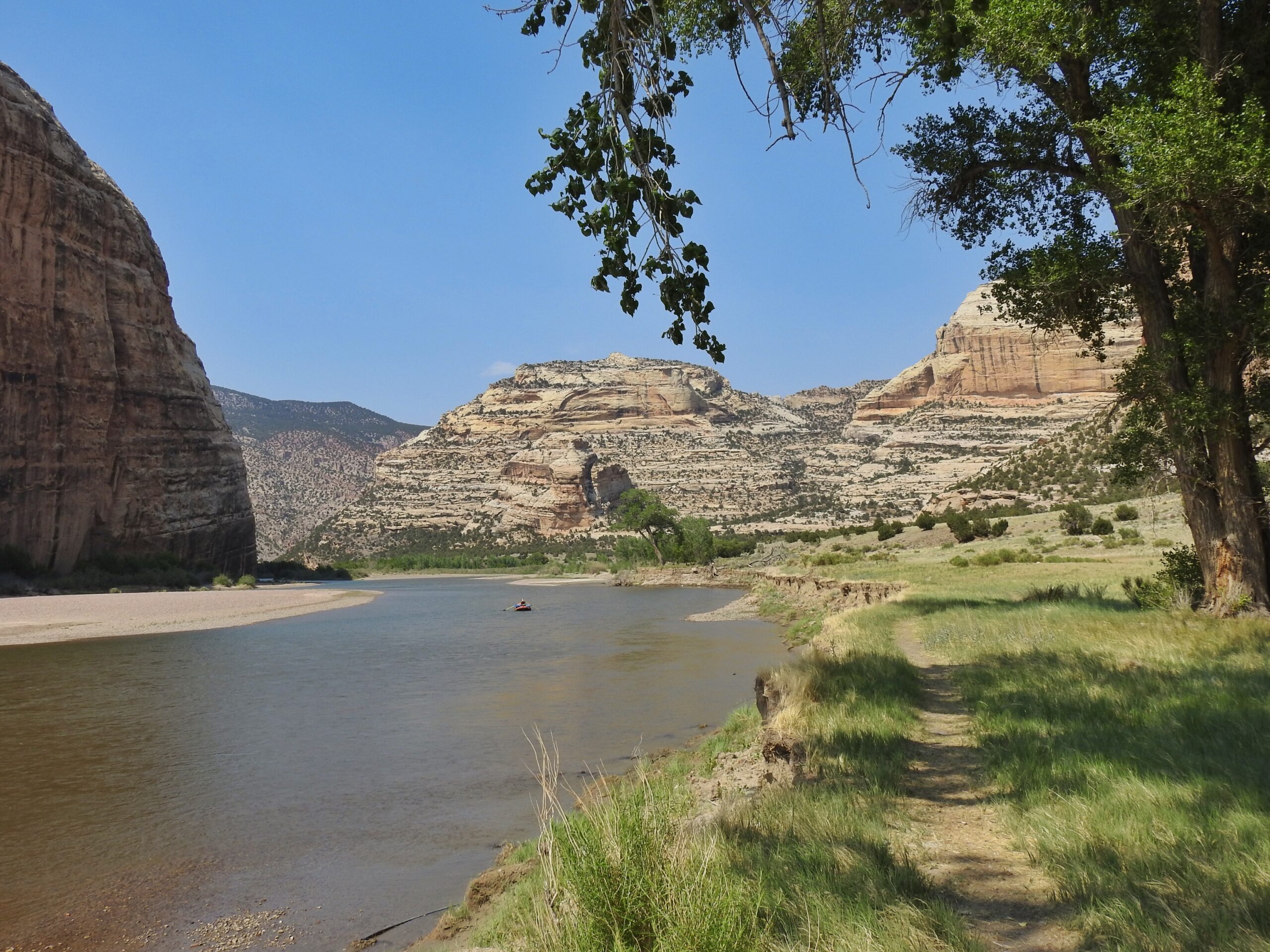 This was our view from that point.

It was hard to leave. When we finally did, we made a couple stops on our way back up to civilization. The first was to see some Indian petroglyphs. 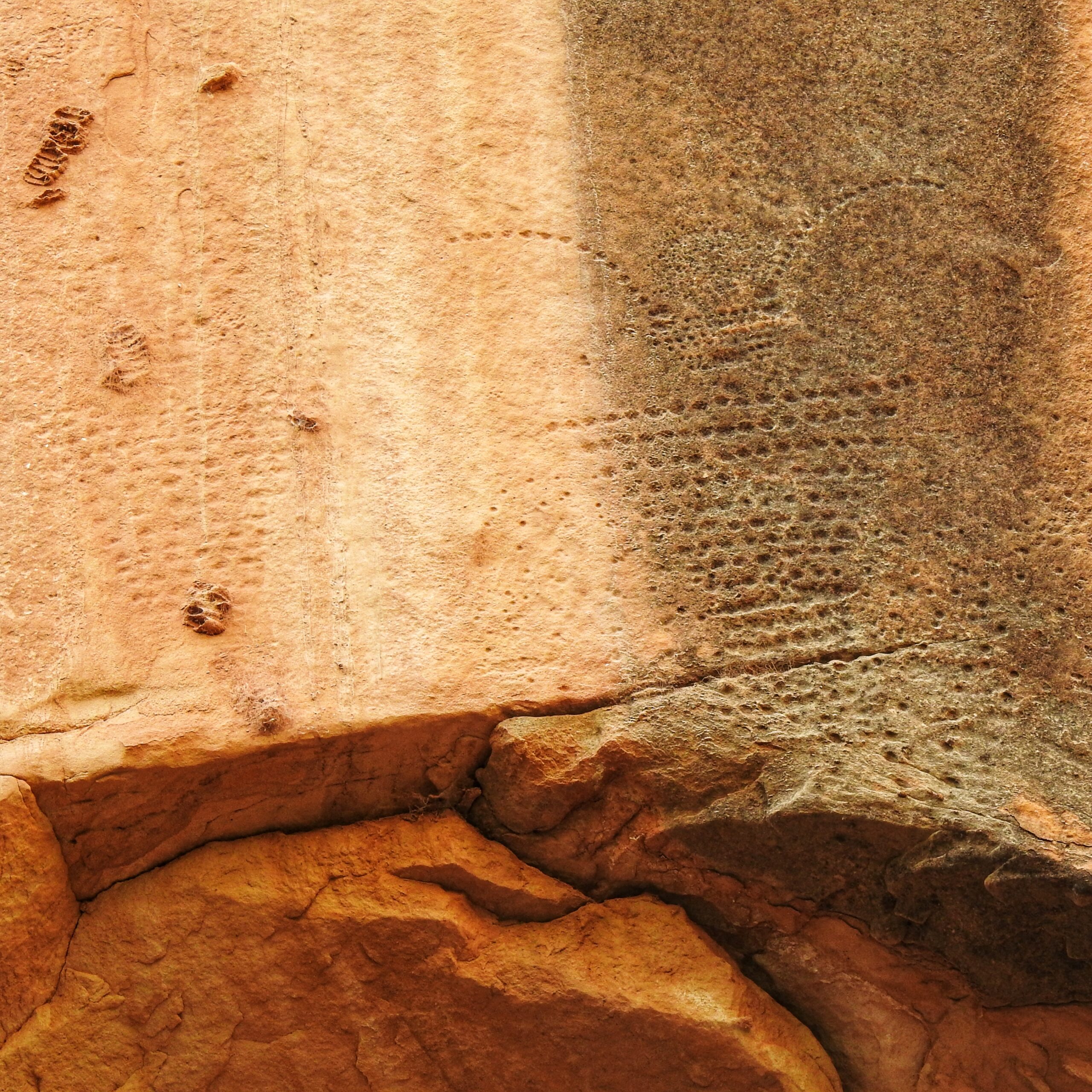 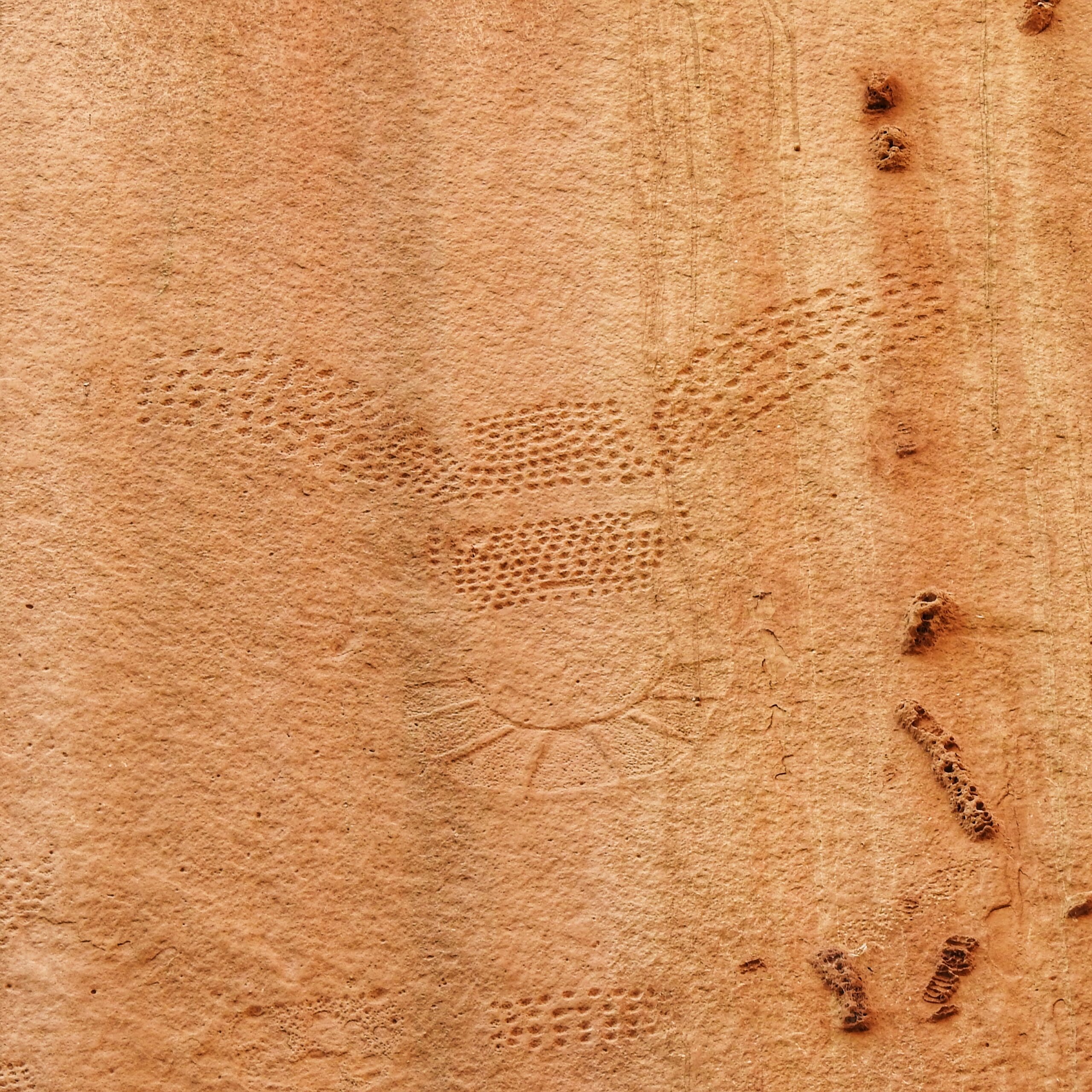 It’s believed the carvings were made by the Fremont people about 1,000 years ago. Today, they are 35 feet up the canyon wall, far out of reach, but an interpretive sign said that’s where the floor of the canyon was then. Makes the evolutionists’ claim that it takes millions of years to carve canyons seem a bit silly, but we knew that. The sign said these are “human-like figures, each with what appear to be elaborate headdresses or necklaces,” but I’m not seeing it. How do we know it’s not just 11th-century graffiti? 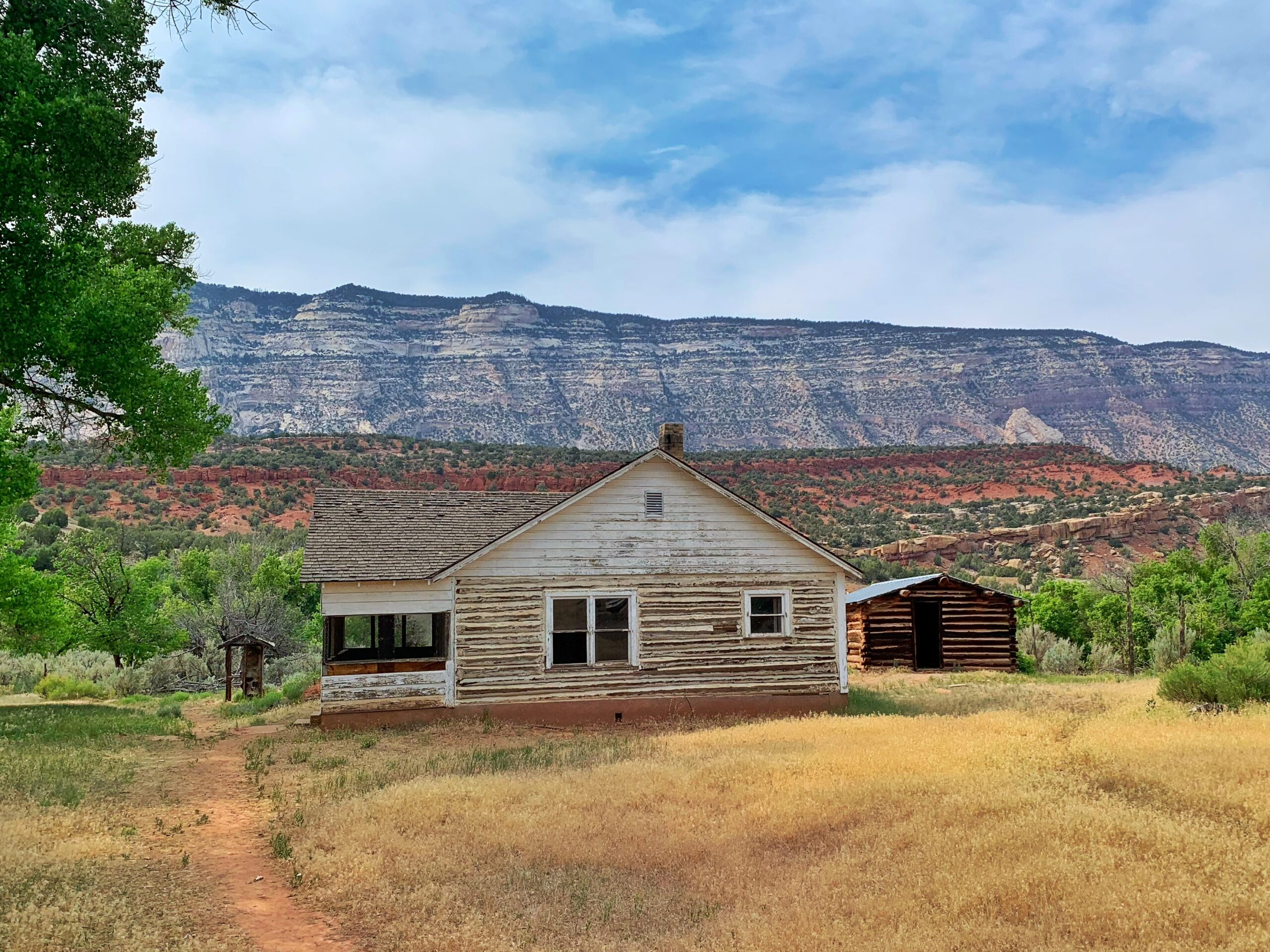 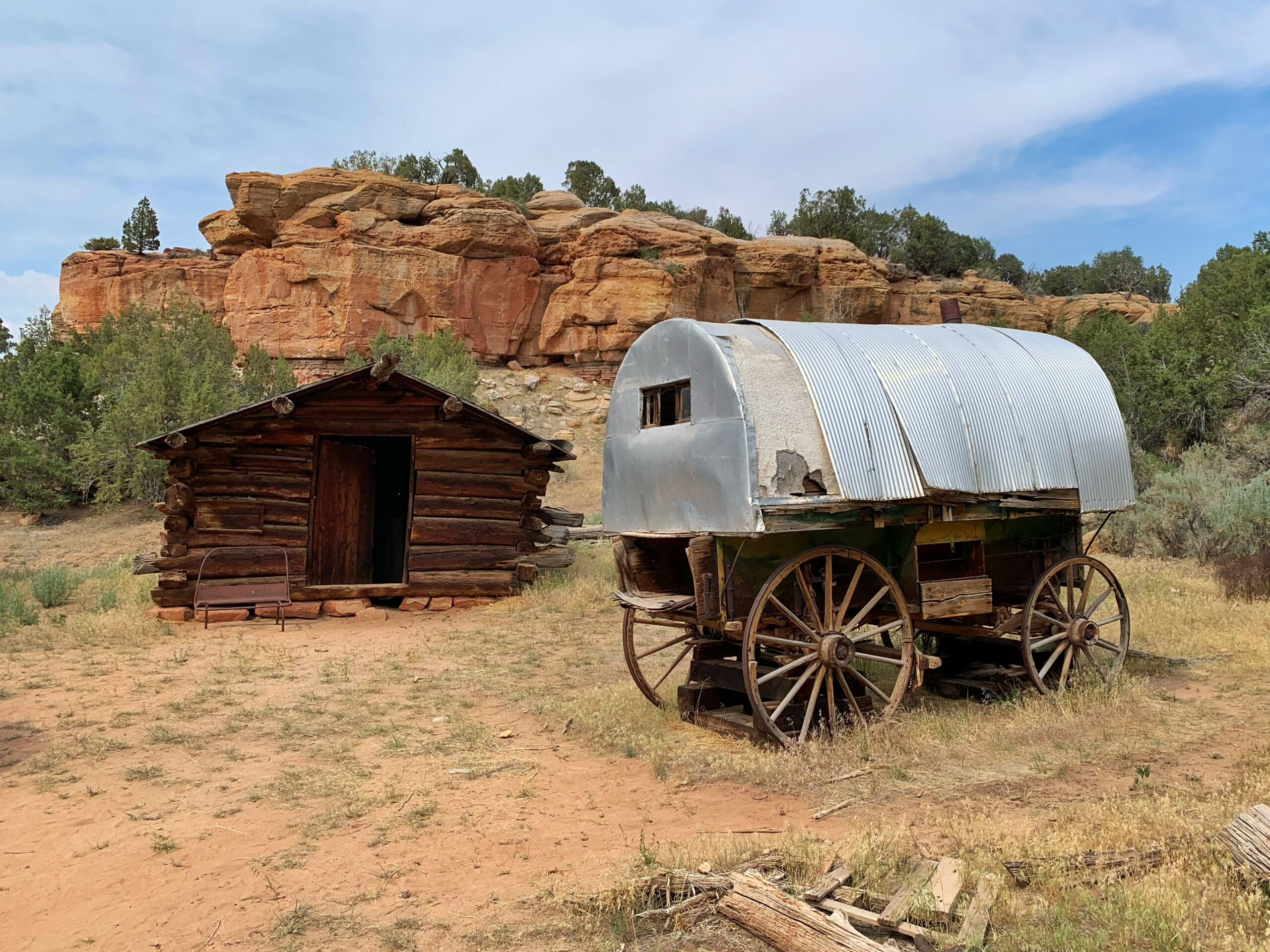 We also stopped to see the Chew Ranch. The Chews settled here in 1910 in a sod house. They build the frame house in the 1940s and sold out to the National Park Service in 1966.

We drove out of the canyon and on into Vernal, Utah. We stayed at the Dinosaur Inn, which was pleasant enough. Supper was pizza at a not-terrible place connected to the hotel. 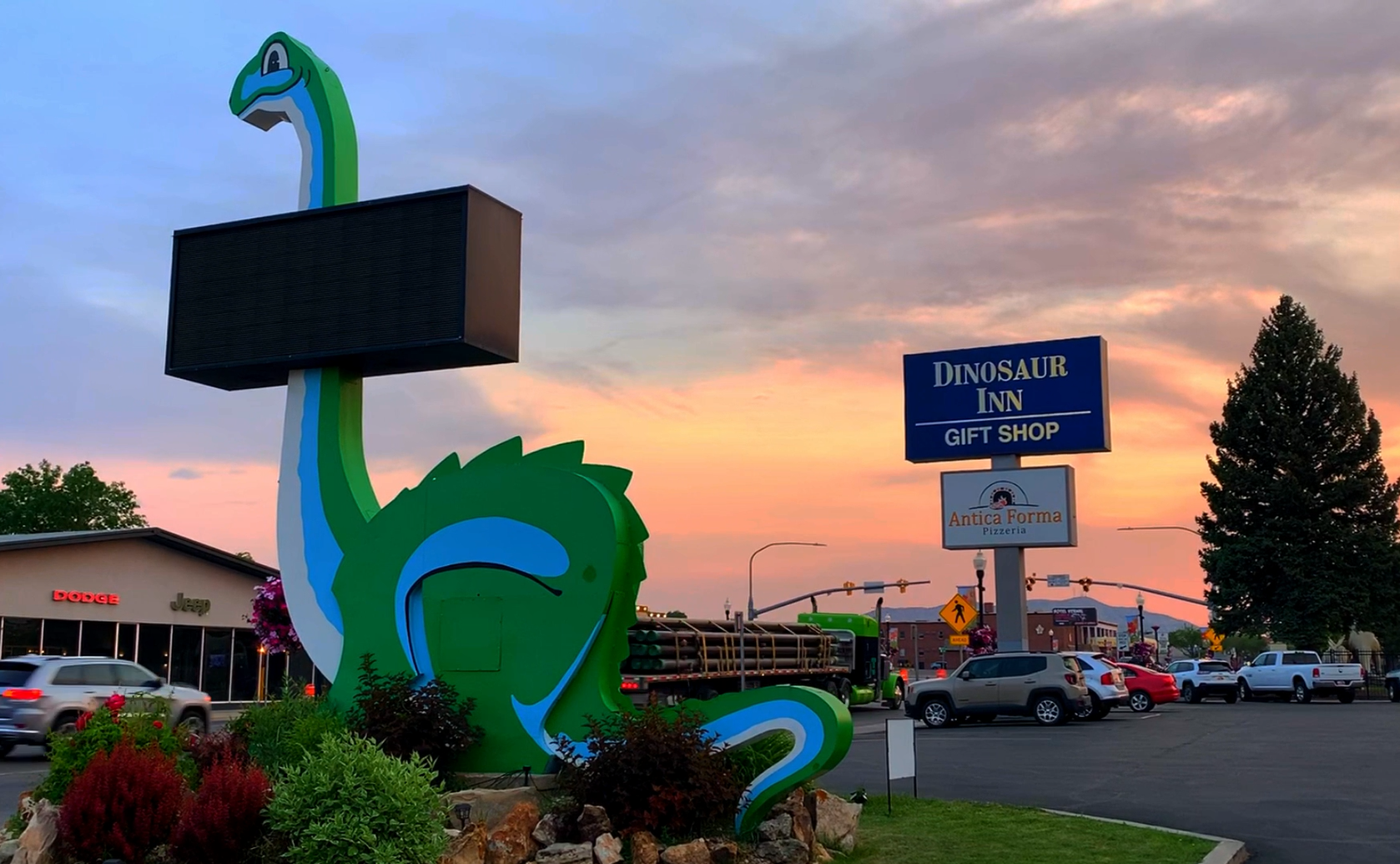 With the successful search for wild horses, the stunning and unexpected adventure in Echo Canyon, and my first ever California Quail (next post), this was a great day.

This entry was posted in National Parks, Scenery. Bookmark the permalink.