The main range of the California Quail is California, Oregon, and parts of Washington, Idaho, and Nevada. There are scattered populations in Utah that may be introduced. Even though it’s a common bird, I’d never seen one because I haven’t spent a lot of time birding in its range.

On Tuesday, we toured the Colorado portion of Dinosaur National Monument. We spent the night in Vernal, Utah. On the north side of town, California Quails are reported almost daily, especially in a small nature park. I dropped my wife off at hour hotel and headed over to the park—a drive of about 10 minutes.

The park is covered with scruffy brush and cottonwood trees. I walked slowly, listening for scuffling in the brush. On the other side of the border fence, there was an open area with scattered bushes. I spotted a quail running across the area, hightailing it for the woods. I managed one quick photo—good enough prove I saw the bird, but not at all satisfying.

I continued wandering. I think I may have caught glimpses of a few; it’s hard to say. I headed back toward where I saw the first one. A male was out in the open, picking at the ground just beyond the fence. I crept closer, looking for a place to get photos through the fence. Just when I was getting to a good place, a couple walked by talking. The bird ran off. The guy knew they had disturbed me. He asked, “What was it? Quail?” I nodded. He shrugged—it was no big deal to him. He lives there. But it was a lifer for me.

No problems. The quail quickly reappeared, further from the fence but in the open where I could get some decent photos. 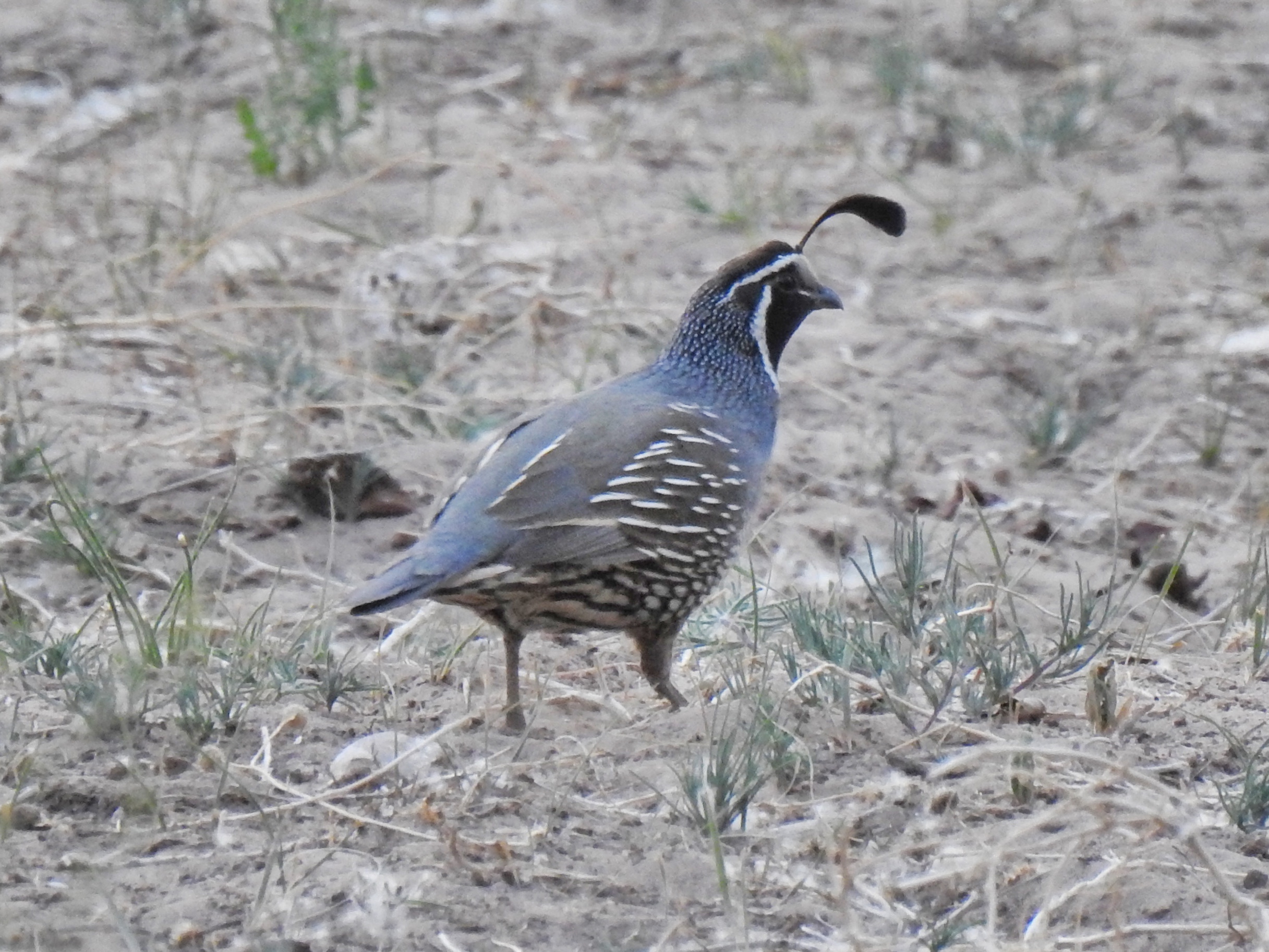 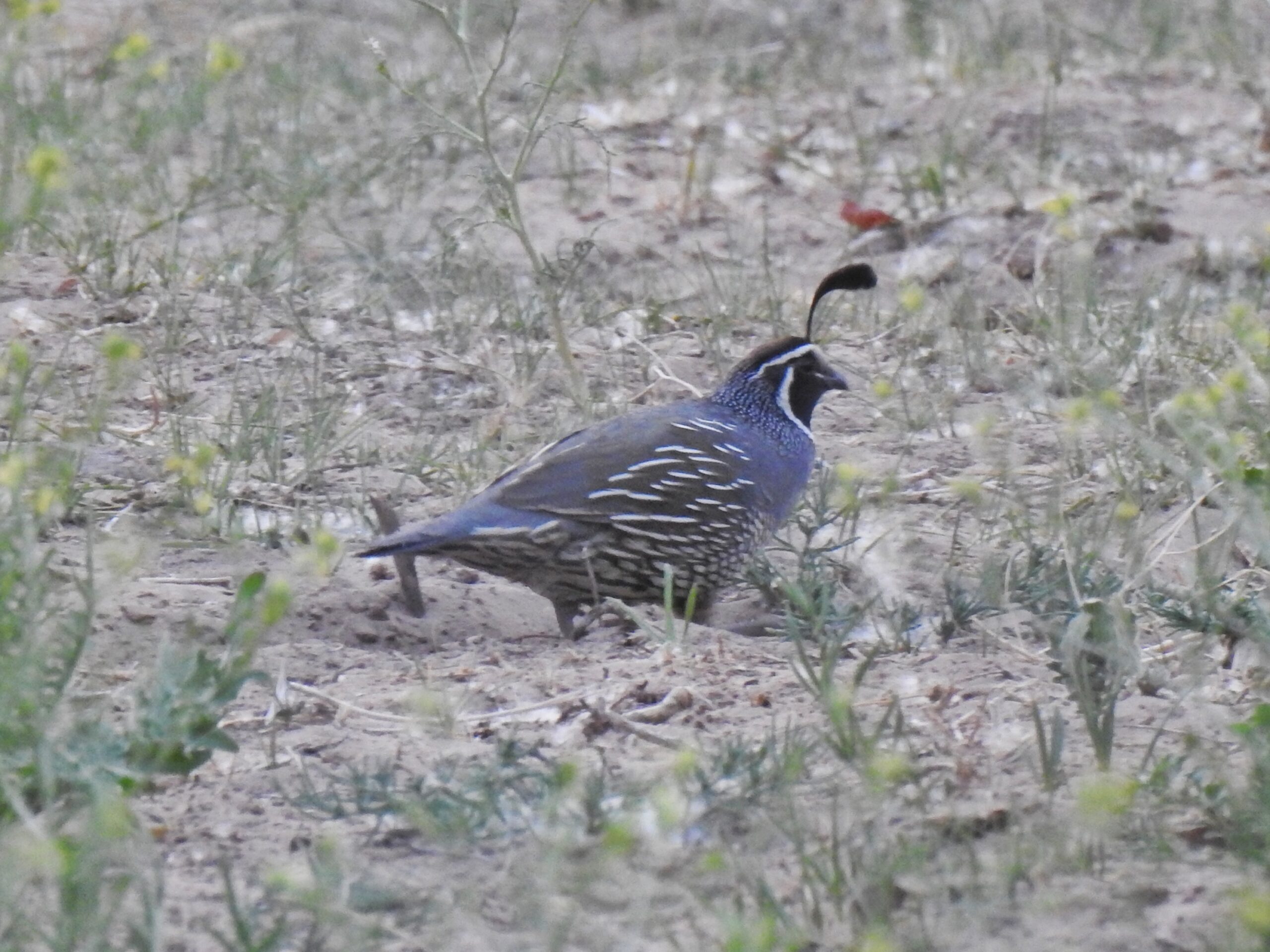 I watched it for about 10 minutes. I was amused by the way its topknot bounced up and down as it walked. I imagine having that constantly in your peripheral vision would get old. The quail gradually moved further away where tall grass and weeds blocked my view. It was also getting close to sunset, so I headed back to the hotel.

In the morning, we drove to the Utah unit of Dinosaur National Monument. I decided to take back roads, and I soon spotted a pair of California Quail foraging along the edge of a driveway. I made a quick U-turn so my wife could see them and so I could get some photos. This was a challenge—the birds move constantly with jerky movements. 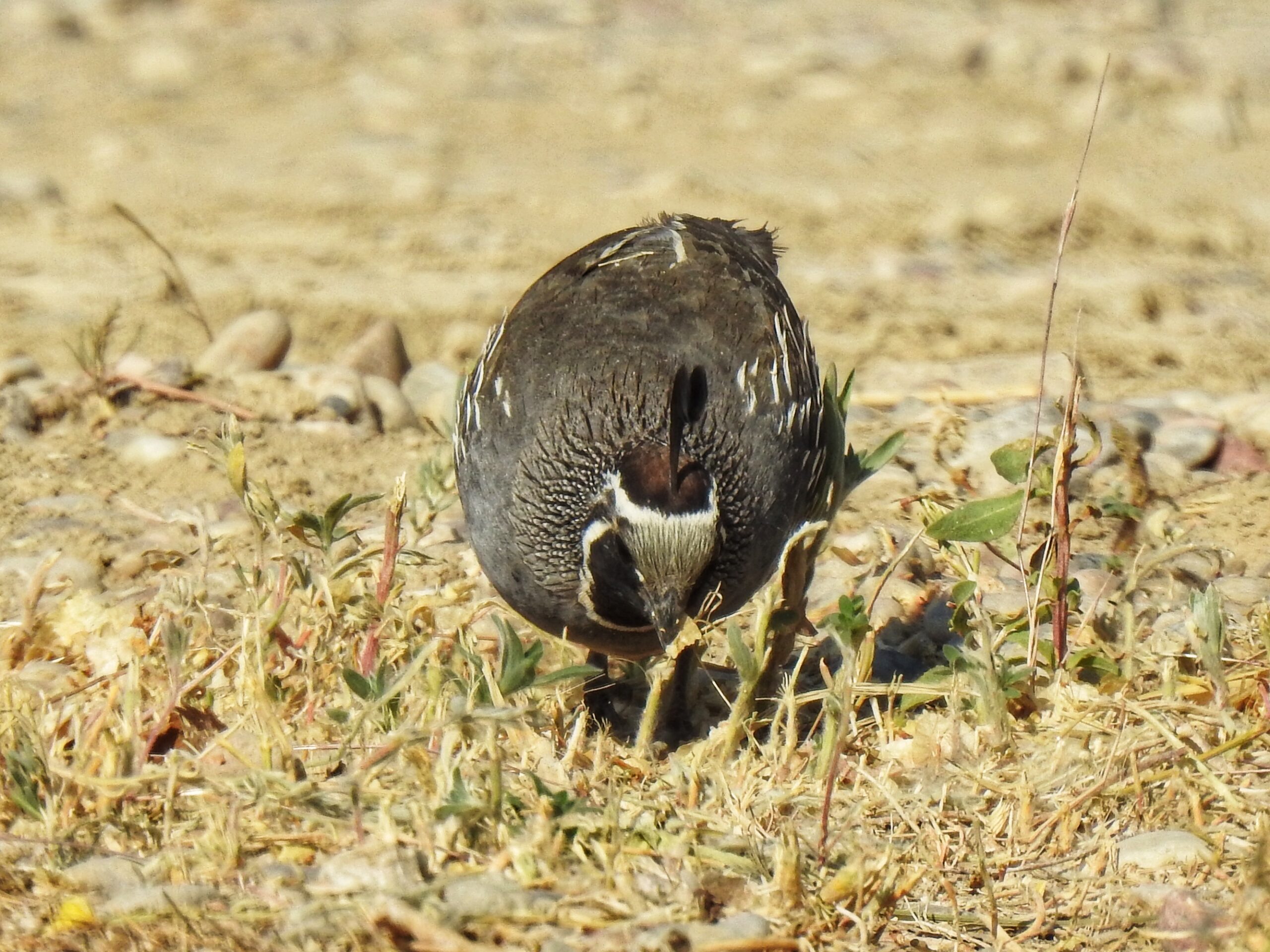 The female was browner and had a smaller topknot. 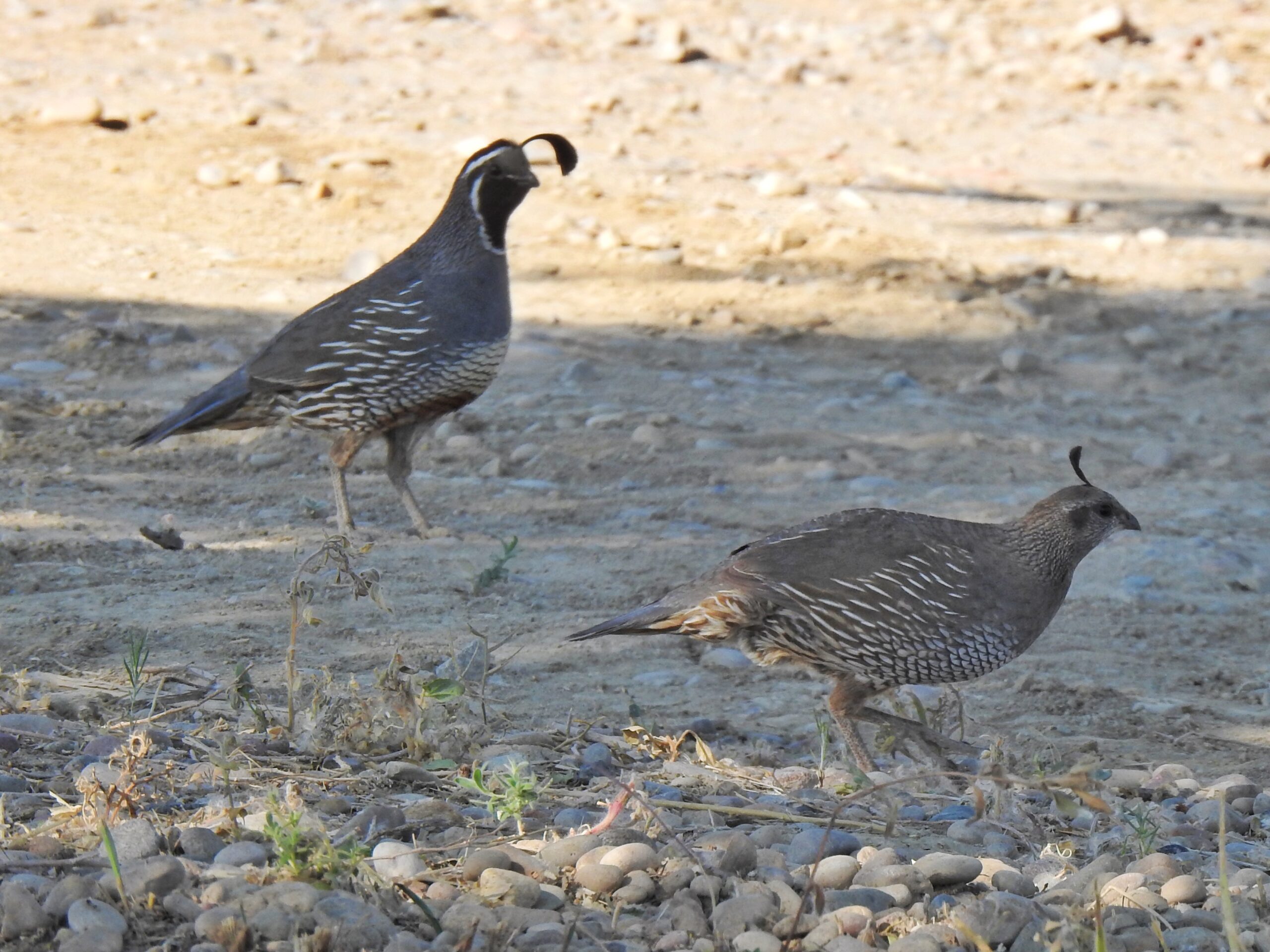 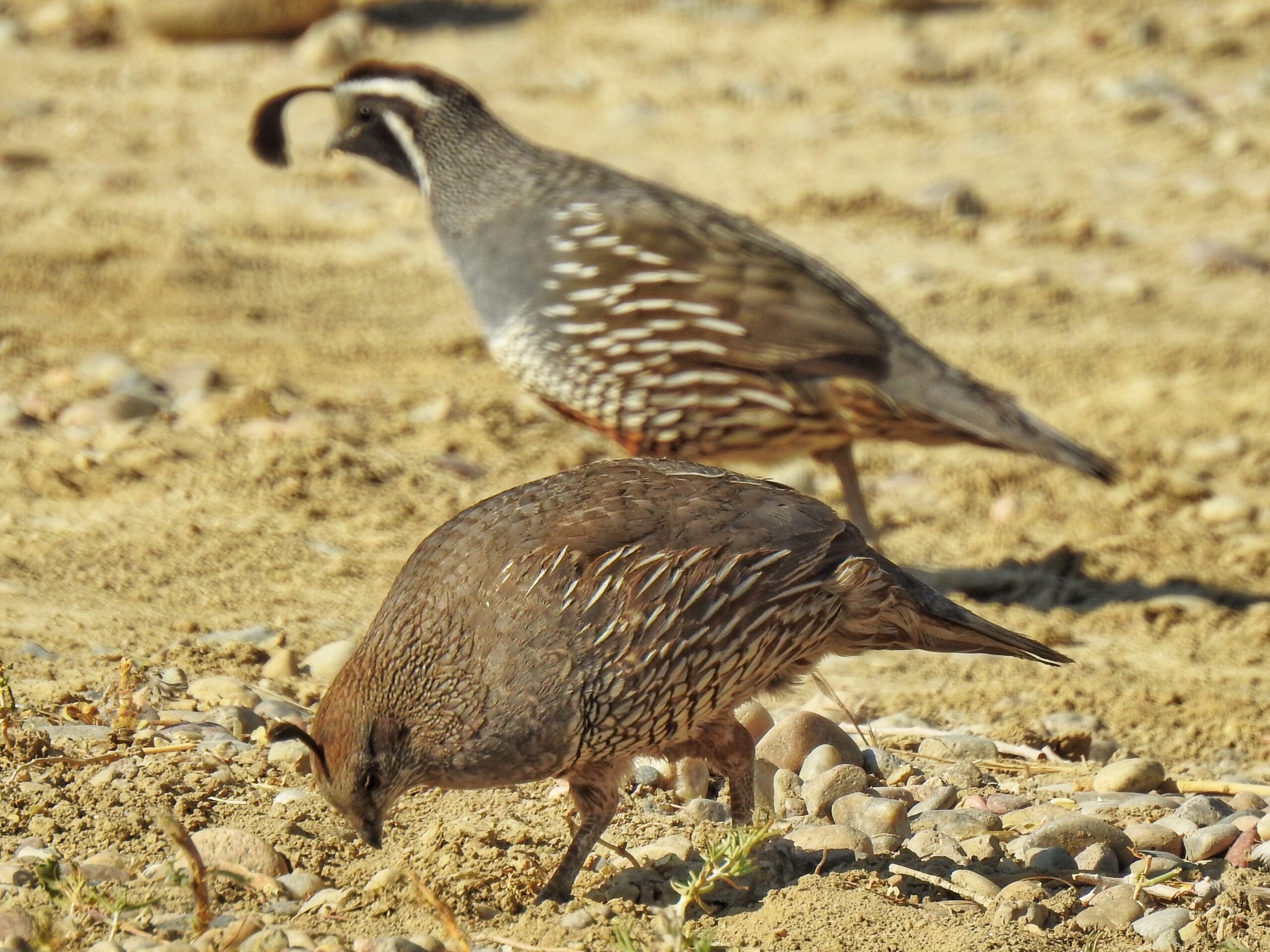