vireo (bird) vicinior (from vicinus, neighboring, related—because of its similarity to other species)

The range of the Gray Vireo centers on the four-corner area where Utah, Colorado, New Mexico, and Arizona meet. A few summer in southeast Colorado, about three hours from my house, and that’s where I went to look for them one morning a year ago. I was not successful. I figured I’d have to make an overnight trip to Colorado National Monument sometime. They’re seen there regularly but that’s a four-hour drive.

Then I saw that other birders had found them near Dinosaur, Utah. Since we were headed that way, I figured I could let my wife sleep in at our hotel and make the 45 minute drive early in the morning. I knew it would be a challenge, but 45 minutes is a lot shorter than 4 hours.

I set my alarm for 5:00. It was still dark when I left. I drove back east into Colorado, then headed a handful of miles south of the “town” of Dinosaur. The most recent sightings were on a dirt road through a pinyon/juniper forest. I parked just as the sun came over the mountains.

For the next 45 minutes, I wandered up and down the road, occasionally playing the Gray Vireo song. I saw Gray Flycatchers, Sagebrush Sparrows, and Ash-throated Flycatchers, but I was disappointed with both the variety and numbers of birds in the area. Even after the sun was fully up, the place was mostly quiet.

At one point, I was standing along the edge of the road looking for birds when I heard the sound of a running animal. I looked up to see a young Pronghorn trotting right toward me. It stopped about 40 yards away and began nosing at the ground. Then it must have gotten a whiff of me because it suddenly looked up with an expression that seemed to say, “Where did you come from?” We stared at each other for a few seconds, and then it took off through the trees toward the open prairie.

I began to suspect the road wasn’t going to be productive for Gray Vireo. A narrow track cut through the trees to the south, dipping down into a wash and then rising again. I decided to walk to the rise and then, if I still hadn’t seen the vireo, drive to one of the other places its been seen this year. As I walked, I played the song a few times, but got no response.

I reached the rise and looked out over the trees ahead of me. Just then I heard the vireo singing behind me back by the wash. I walked back and played the song. Almost immediately, a Gray Vireo landed on a bare branch in a juniper, maybe 15 yards from where I stood. It hung around for maybe four minutes, enabling me to get several photos and a short video of it singing.

Then if flew off, and I never saw or heard it again. That night, I asked the bird guide who took me to see the Flammulated Owl about the vireo. He sometimes takes birders to see it too. He said Gray Vireos nest early in the spring, so that by mid-June, they’re pretty  much done. As I experienced, they will still respond to their song, but they aren’t territorial anymore and so aren’t terribly aggressive.

The song sounds like a vireo—perhaps a bit simpler and burrier than some. The bird is … gray. The throat and belly are paler. It has a thin white eye-ring and a thin white wing bar that doesn’t show up in my photos. It also had thin white lores that, with the eye-ring, give it a hint of the typical vireo spectacles. And that’s about it for distinguishing features. It’s chief mark is the lack of marks. The one I saw looked scruffy, like it hadn’t molted in a while or perhaps was mid-molt. 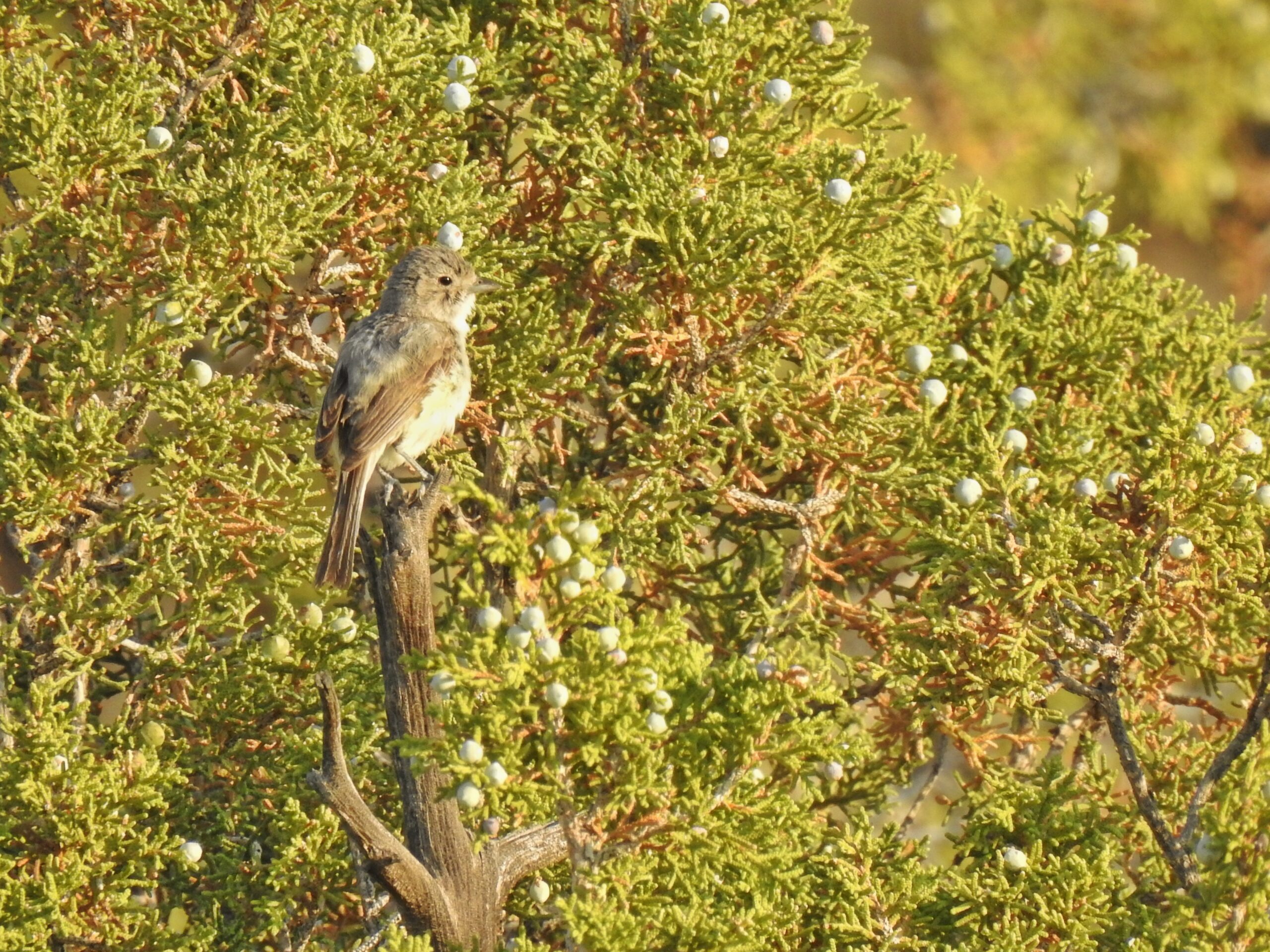 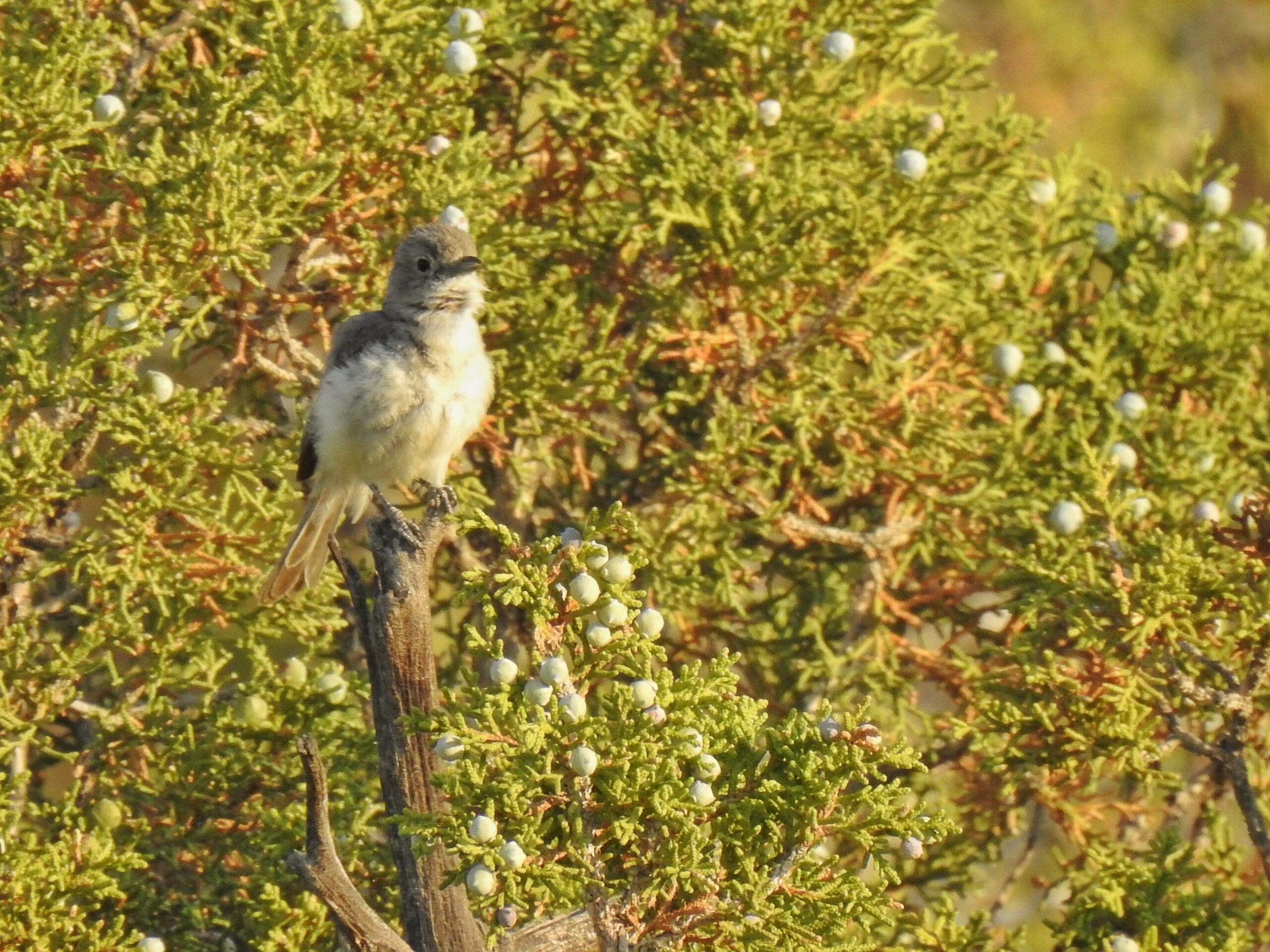 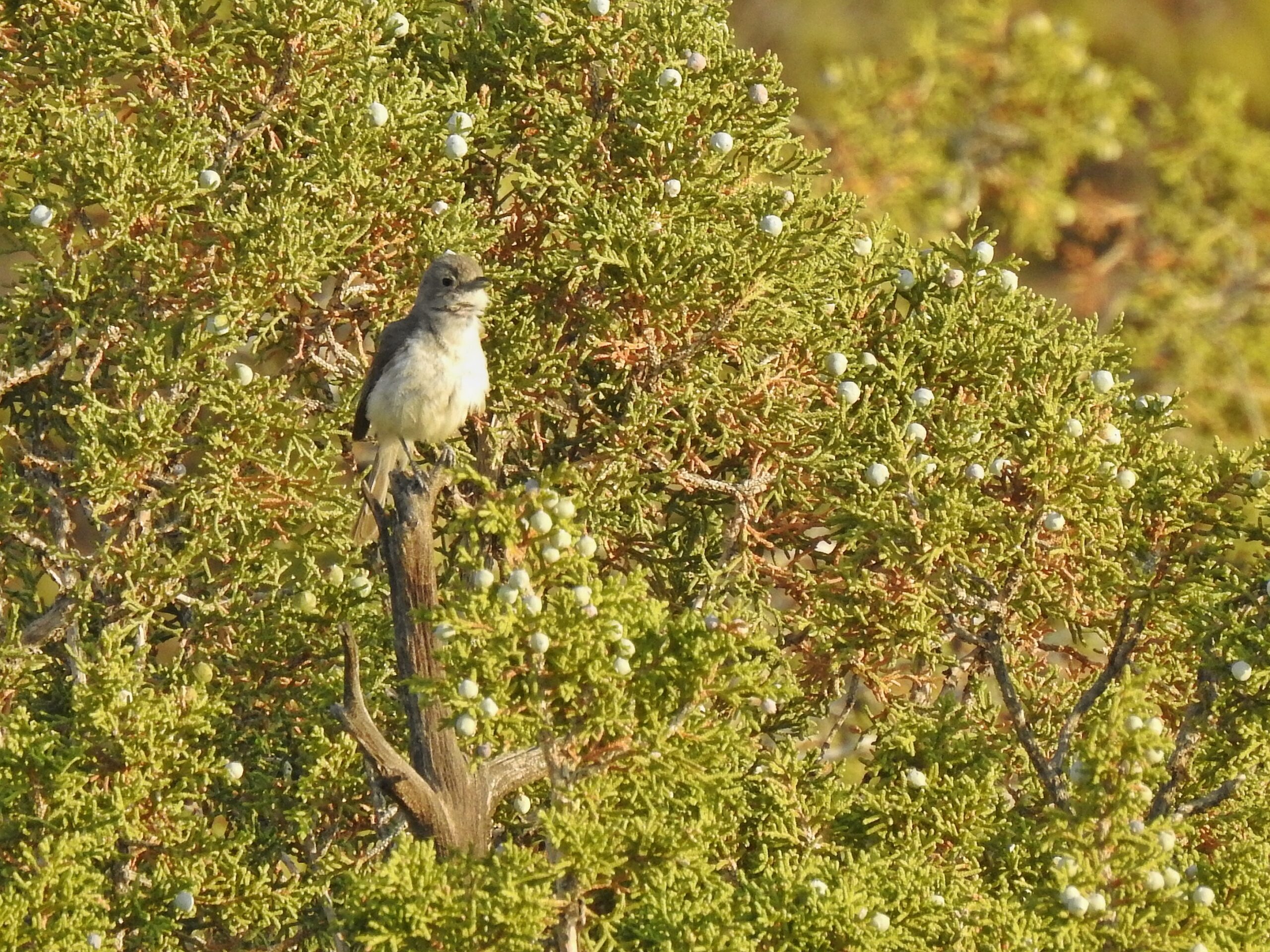 Here’s a close-up of the last photo. 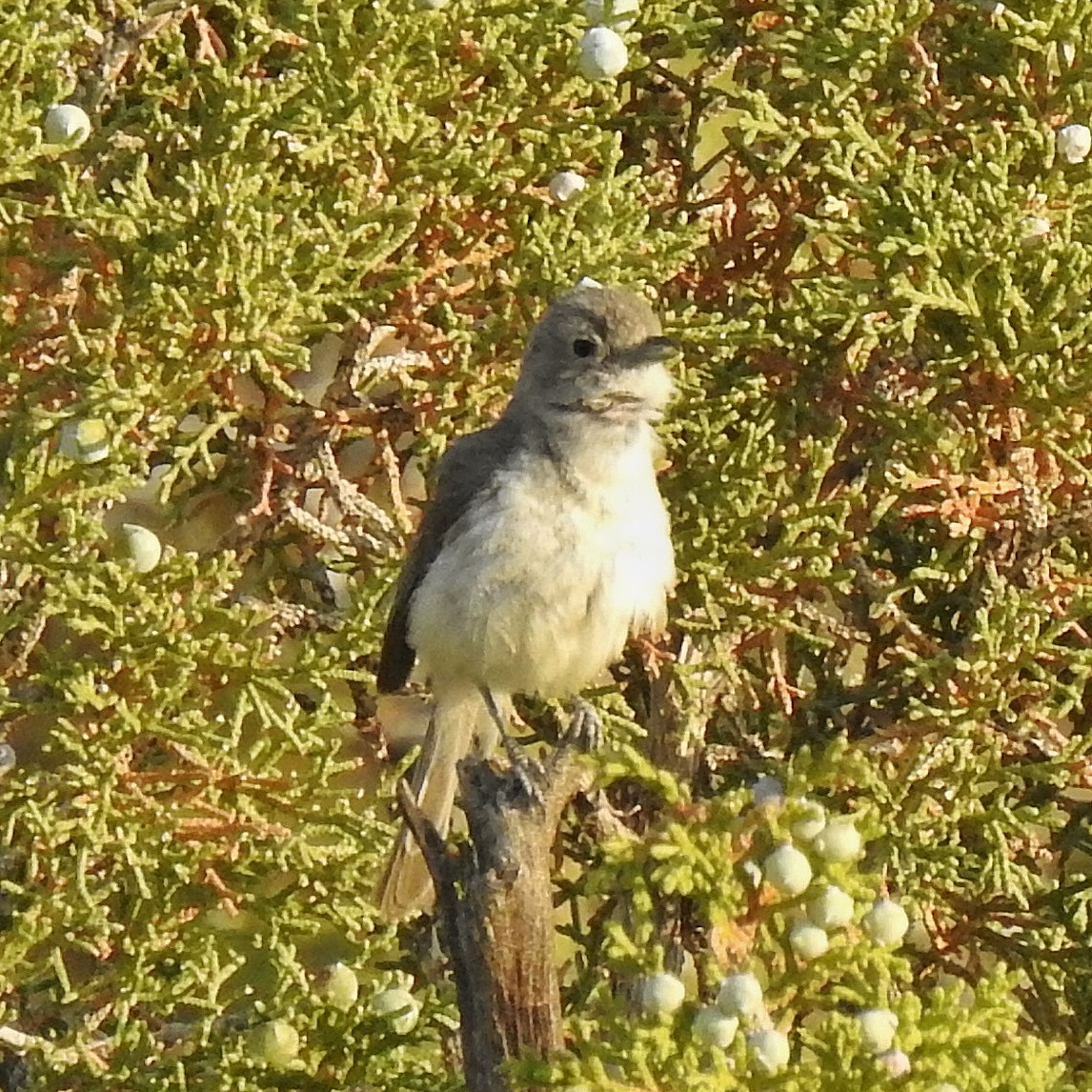 Other birds in the immediate area. 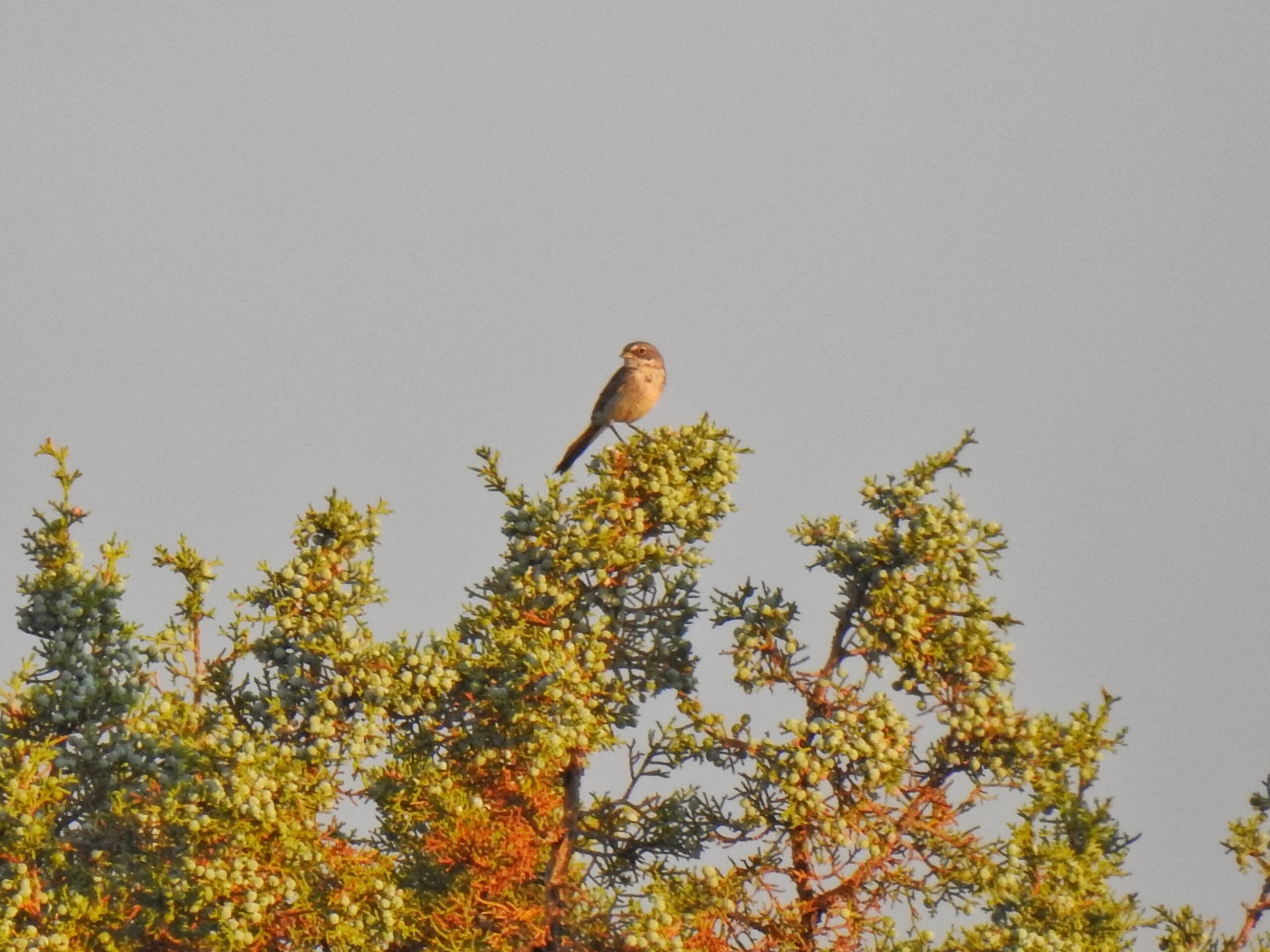 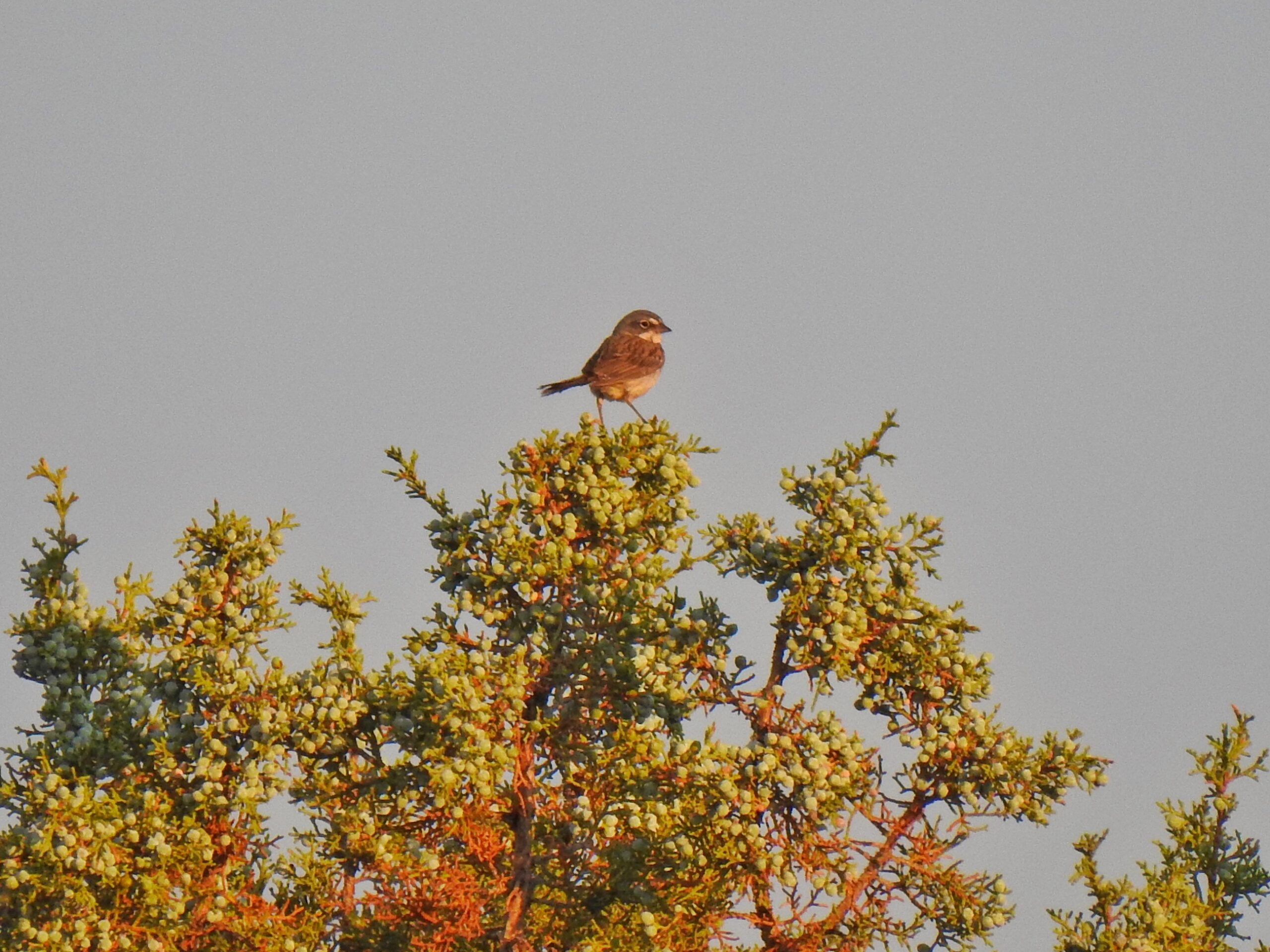 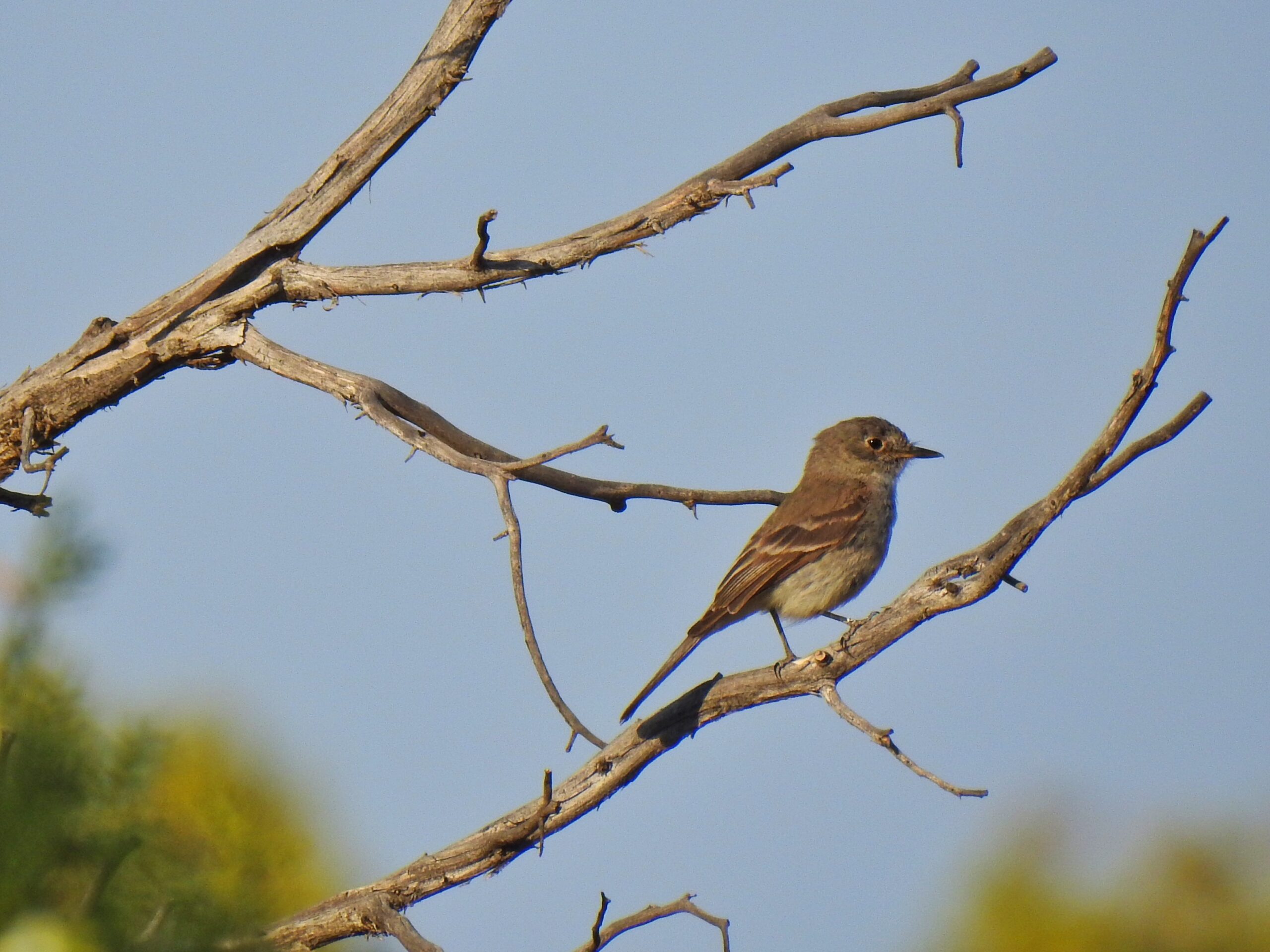