Since we took the trouble to go to Dinosaur National Monument, it seemed appropriate that we see the dinosaurs. I’ve never been very interested. Perhaps its because the study is so much speculation. Maybe it’s because people can’t talk about dinosaurs without talking about evolution. Or maybe it’s because they’re dead and there’s nothing to look at but bones and footprints.

Anyway, to get into the Quarry Exhibit Hall, we had to make reservations. I didn’t know when I would get back from my search for the Gray Vireo, so I signed up for the 11:00 shuttle bus. As it turned out, we got to the visitor center around 9:30 and found out there really wasn’t much to it other than five-minutes of displays and a small gift shop. That gave us time to see some things in the Utah part of the park, like Turtle Rock. Perhaps this is the mountain turtle our street is named after. 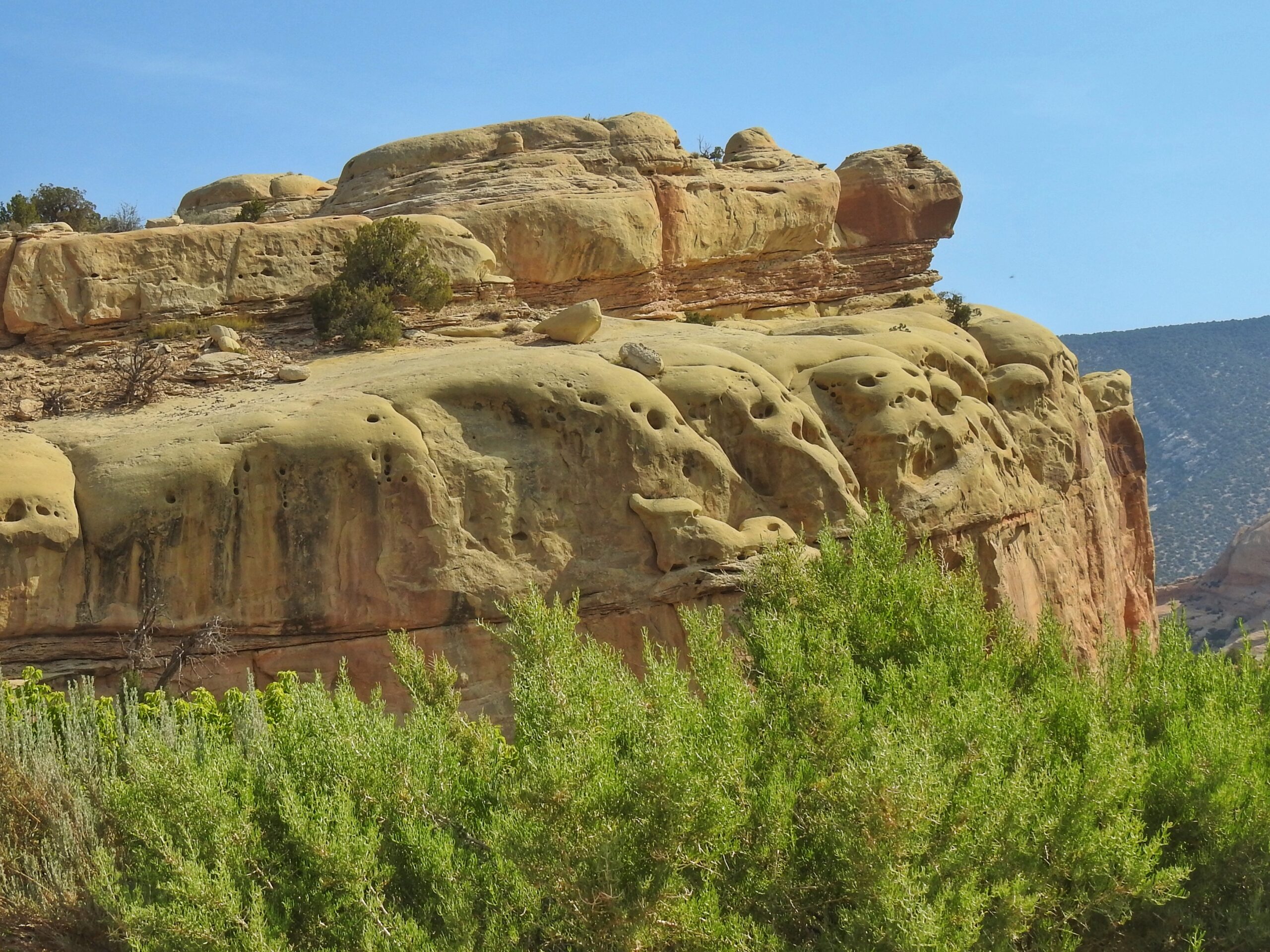 There were also some more petroglyphs (carvings in rock) and pictographs (paintings on rock). 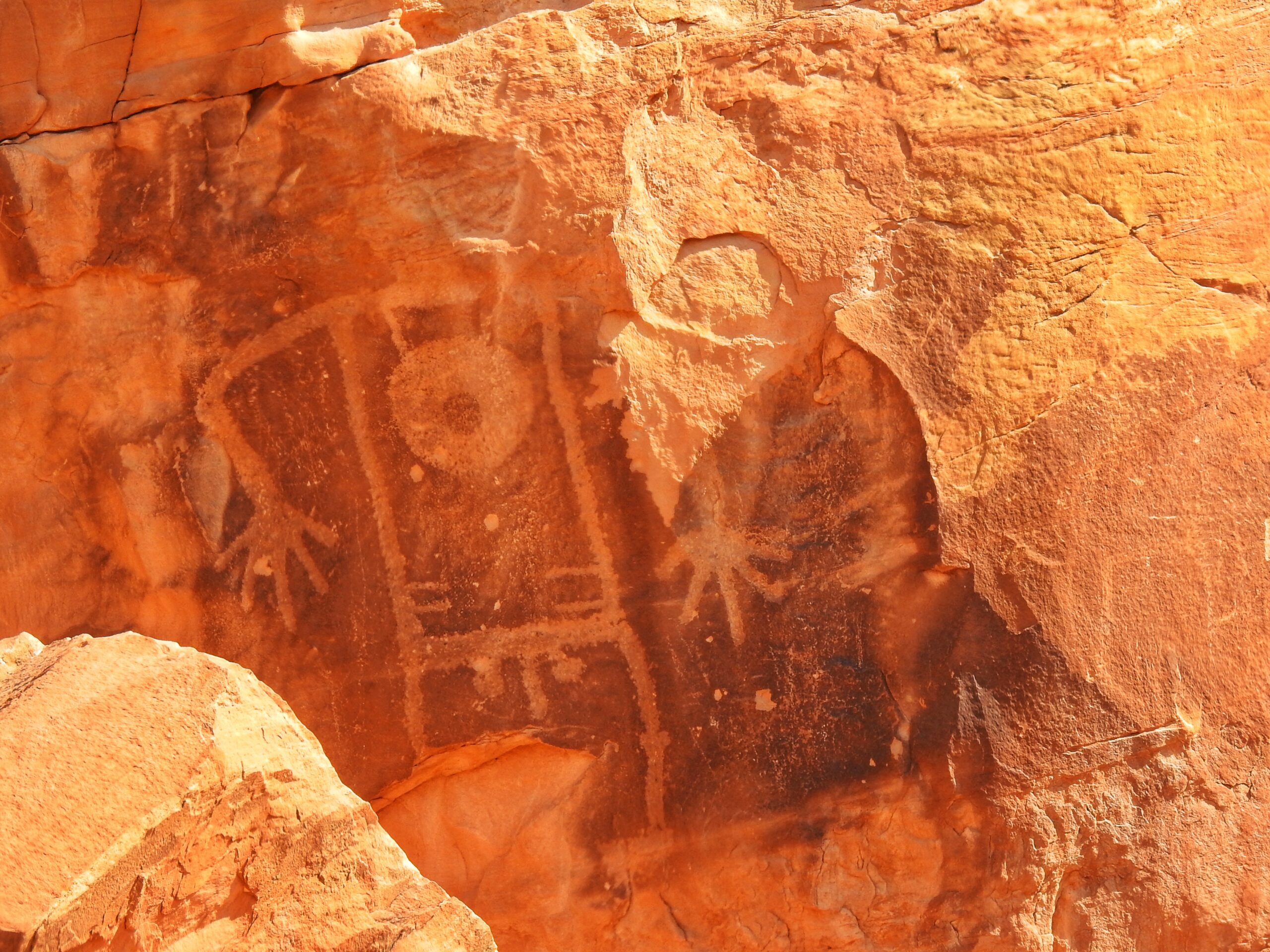 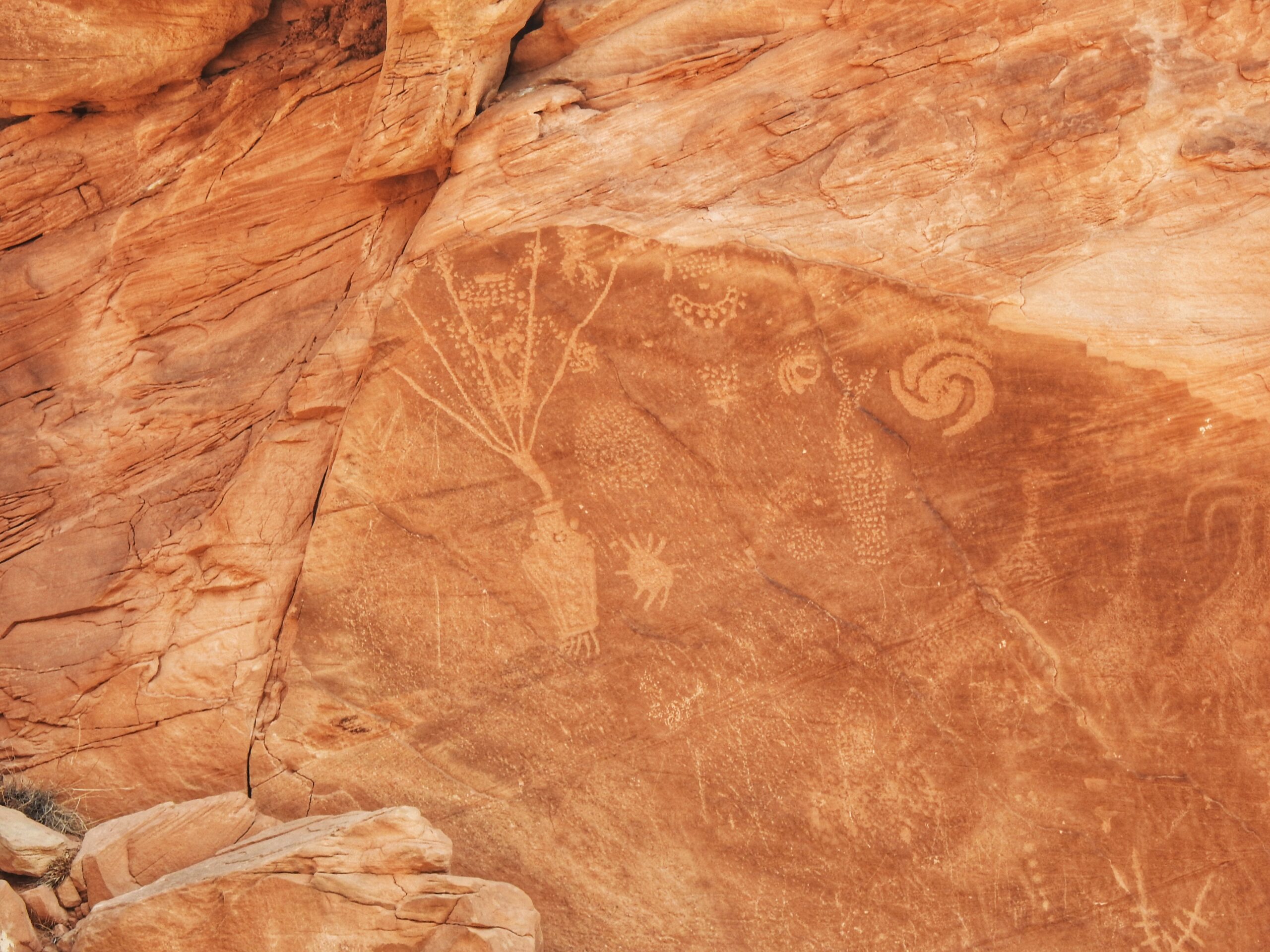 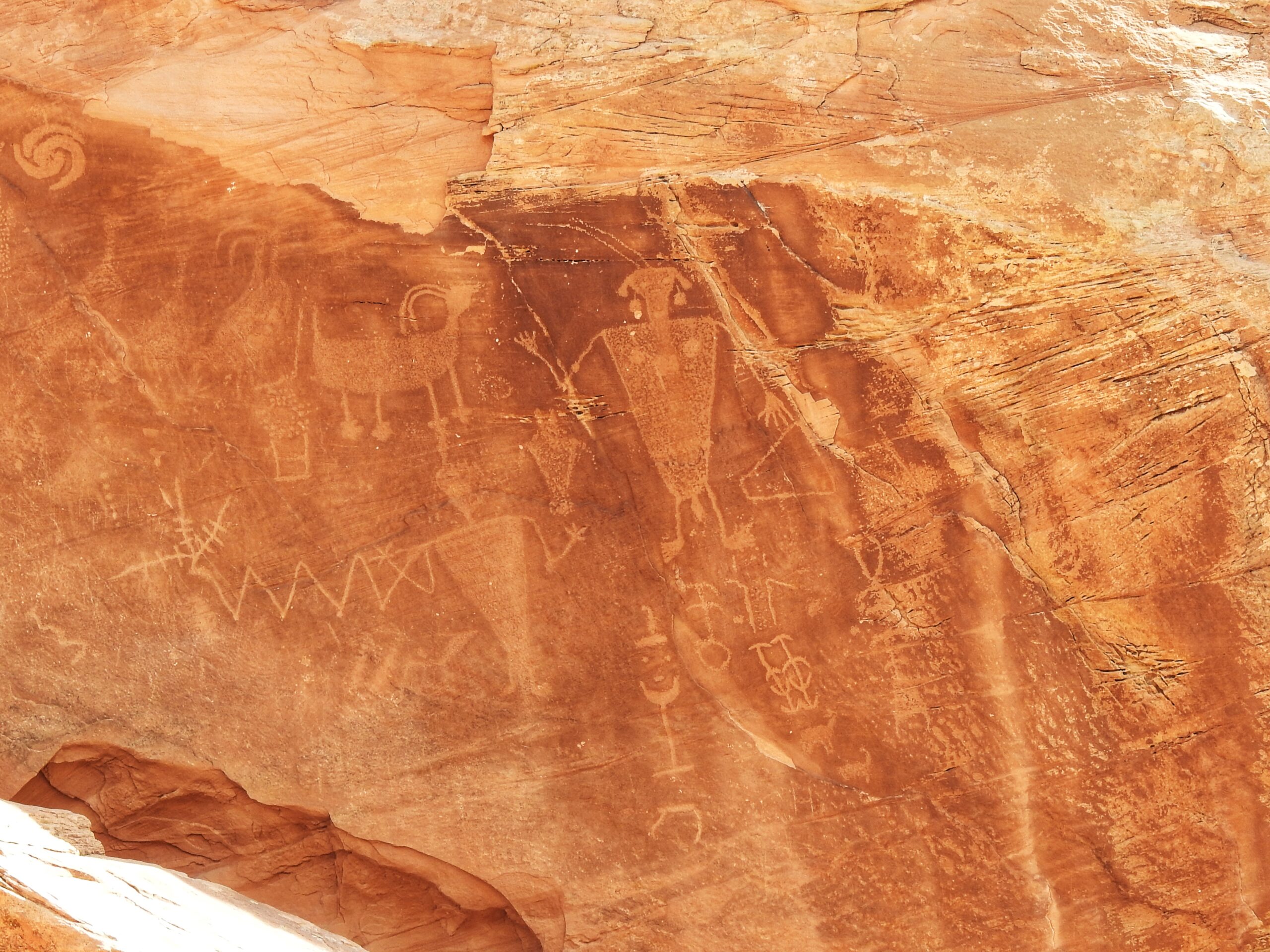 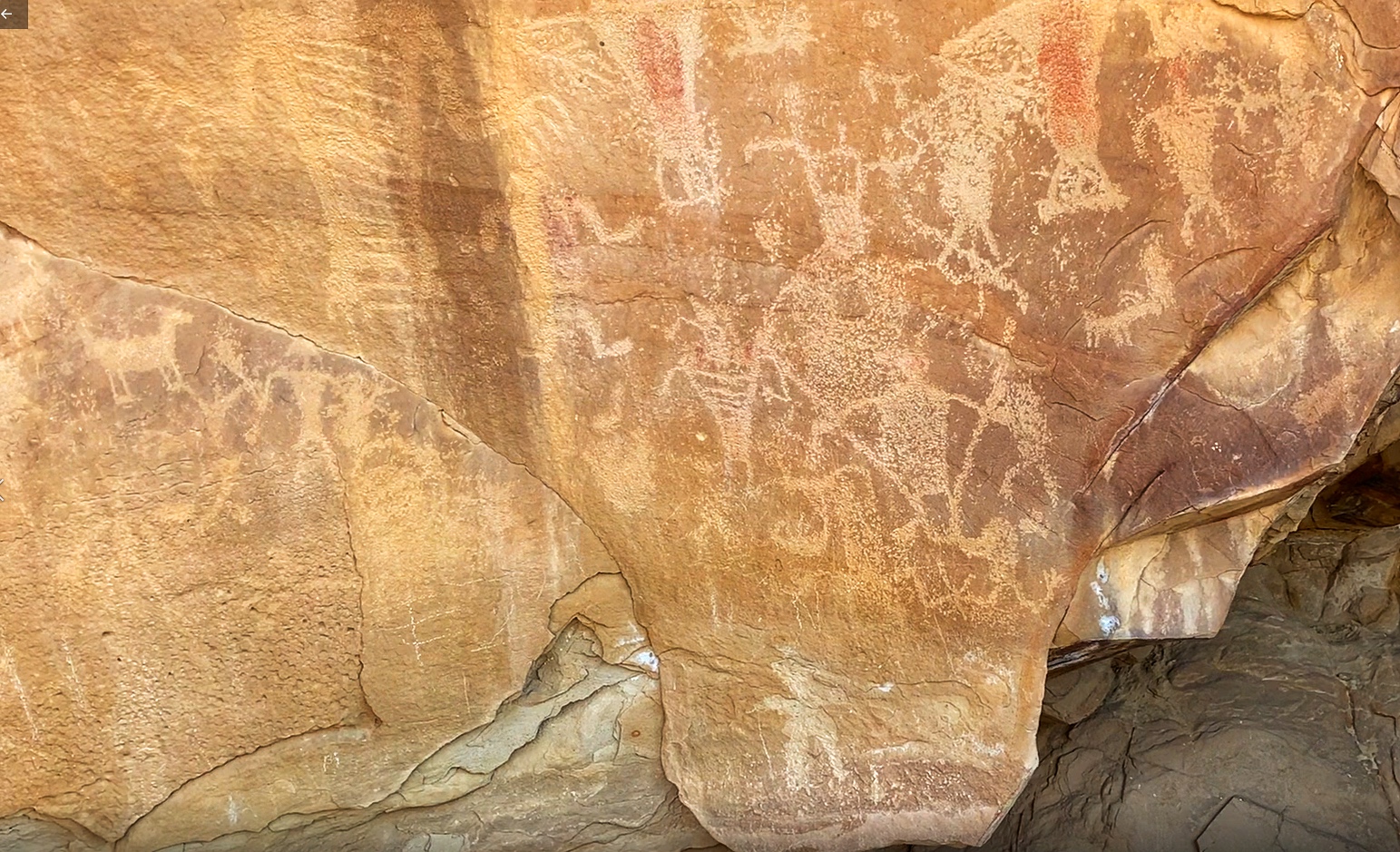 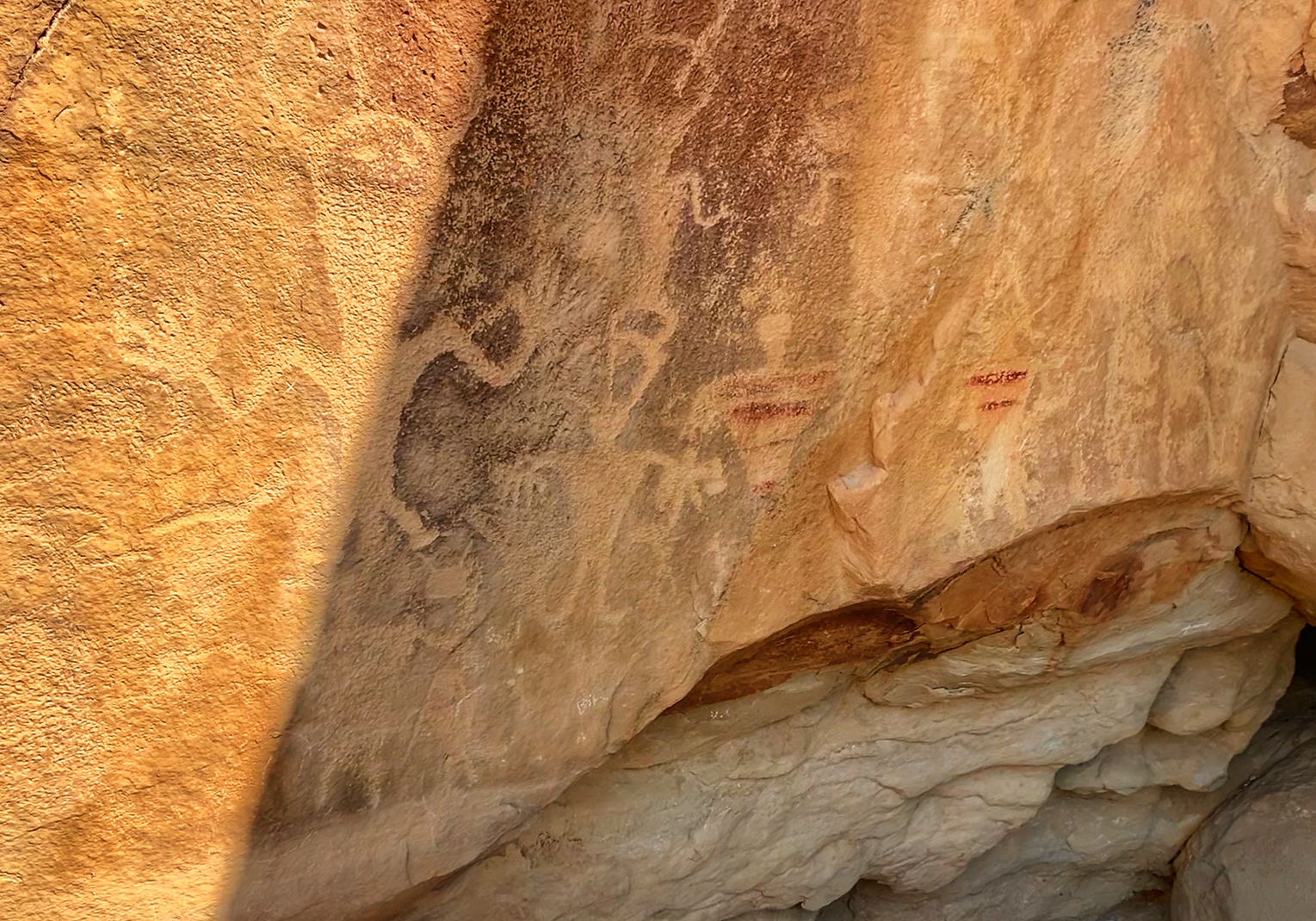 The road ended at the Josie Morris Cabin. After divorcing a string of husbands, Josie homesteaded in the canyon in 1913 and lived there by herself until 1964. She planted orchards and raised cattle. The cabin has three rooms. 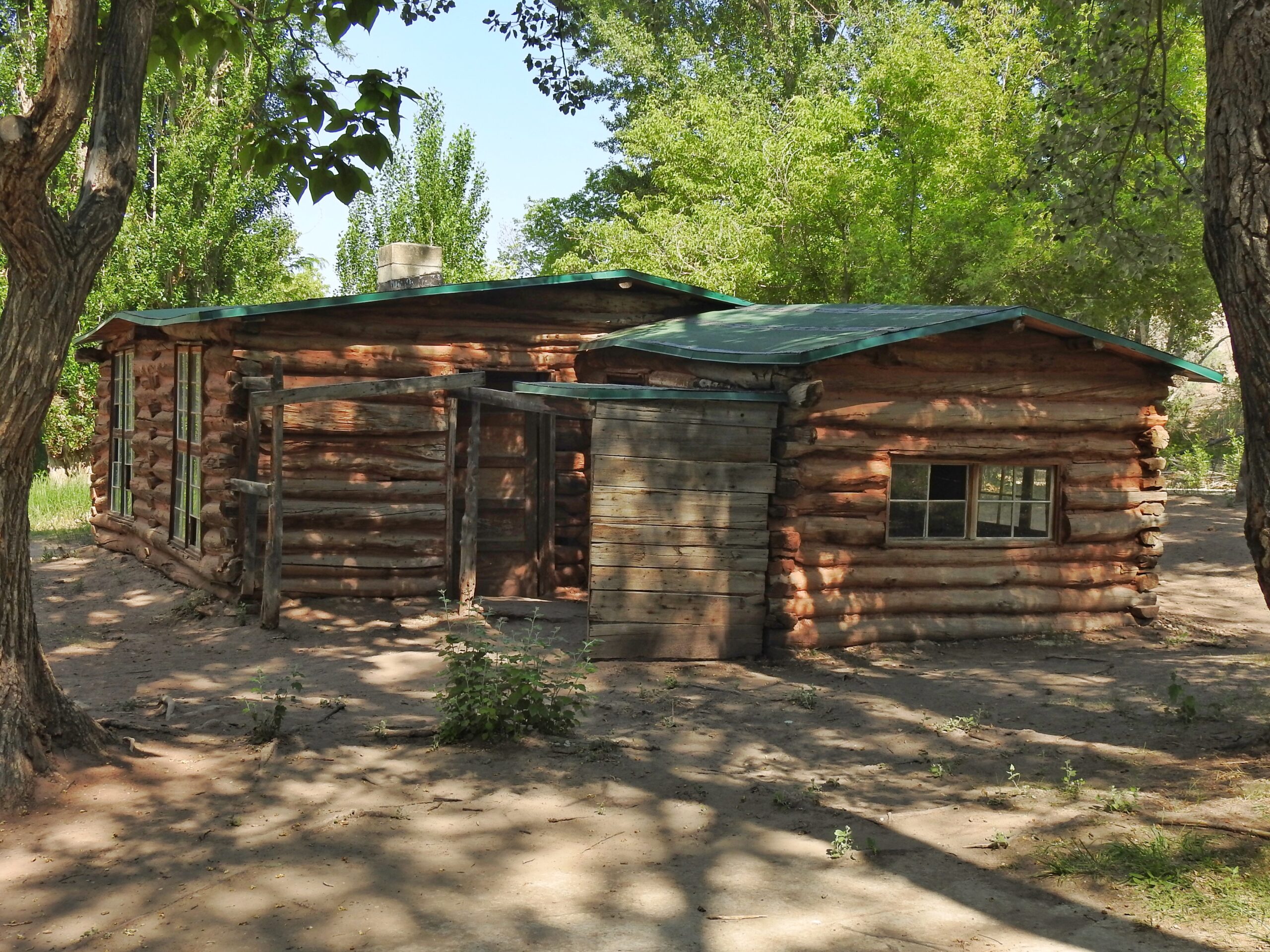 We got back to the visitor center around 10:30, and the guy at the desk told us to take the next shuttle. We never had to show anyone our reservations, so we could have just gotten on board without them or without the $2.00 it cost to make them. There were signs on all the doors saying that it was required that anyone who hadn’t been vaccinated had to wear a mask, but since it specify what vaccination they were referring to, we were good. There were also signs saying that everyone had to wear masks on the shuttle, but since the driver was wearing his around his chin, we didn’t bother there either. In fact, we didn’t put on masks once the entire vacation. Probably 20% of the people we saw were.

Anyway, the shuttle ride took about five minutes. I know I was at the quarry building with my parents when I was little, but I don’t know if I actually remember being there or whether I remember seeing a postcard of our visit. 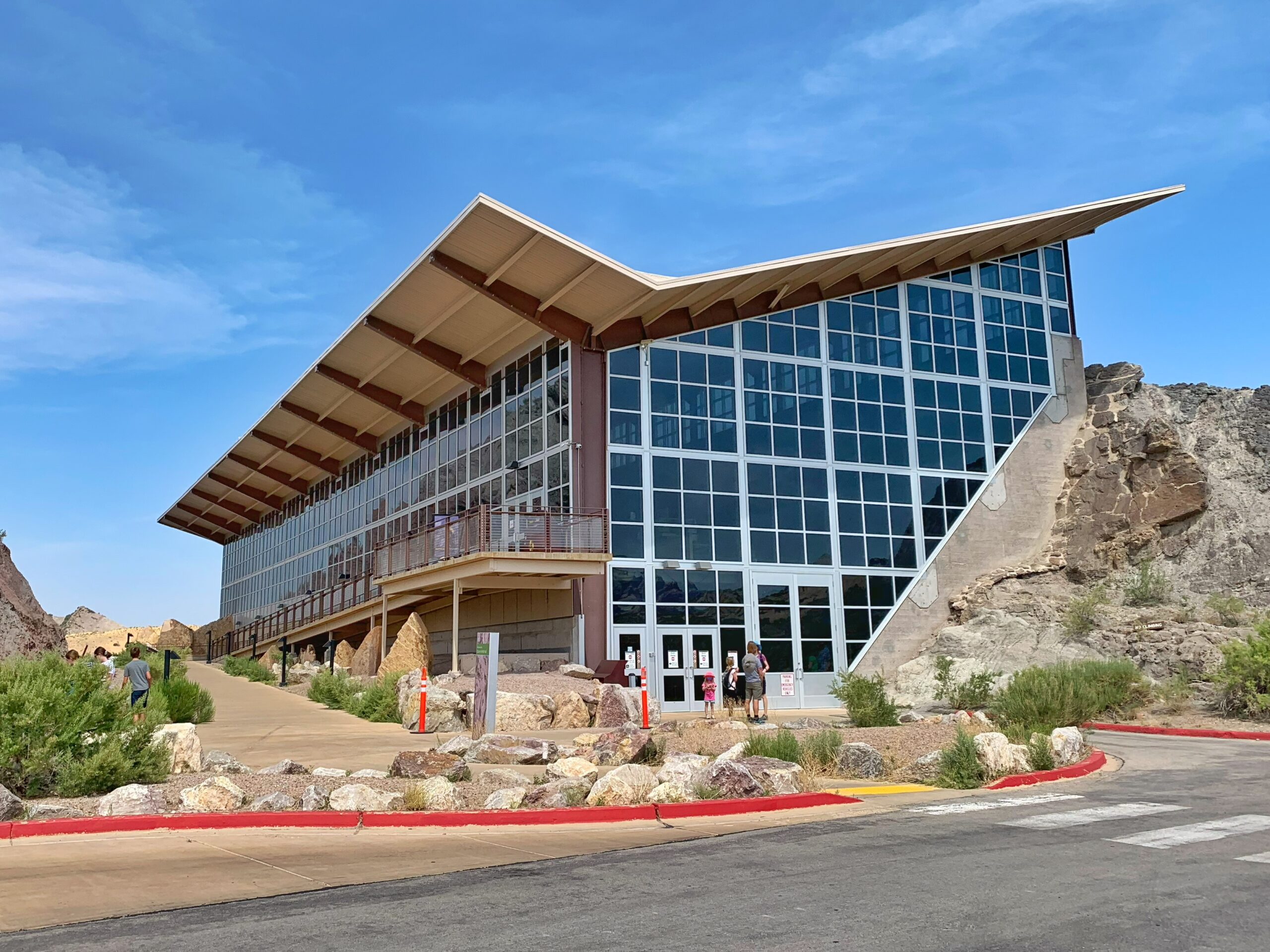 We spent maybe a half hour inside looking at the bones. We made to effort to sort out the bones or determine which ones went with which dinosaur. 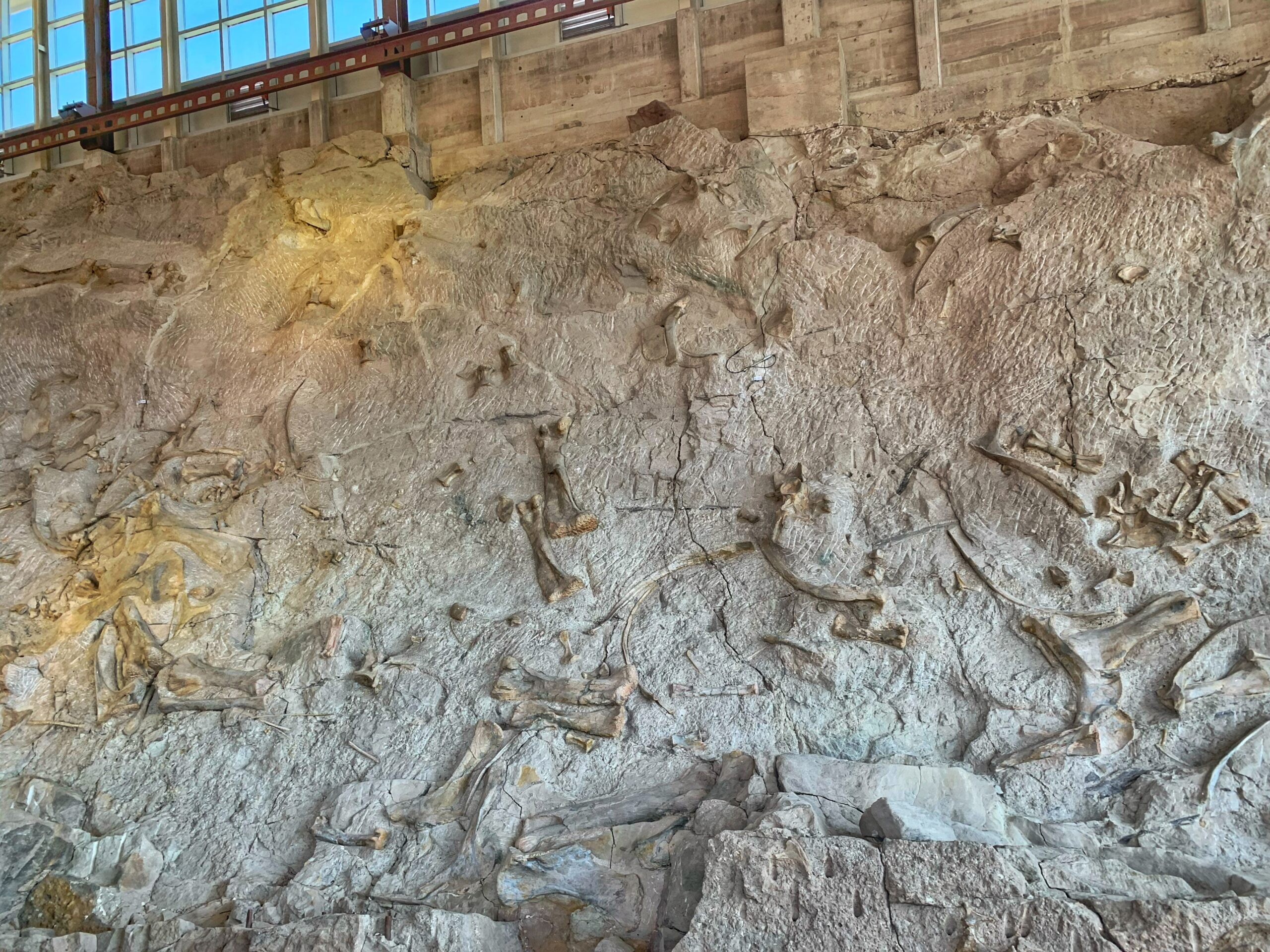 You can get an idea of the scale of the place by noticing the ranger in the bottom left of this photo. 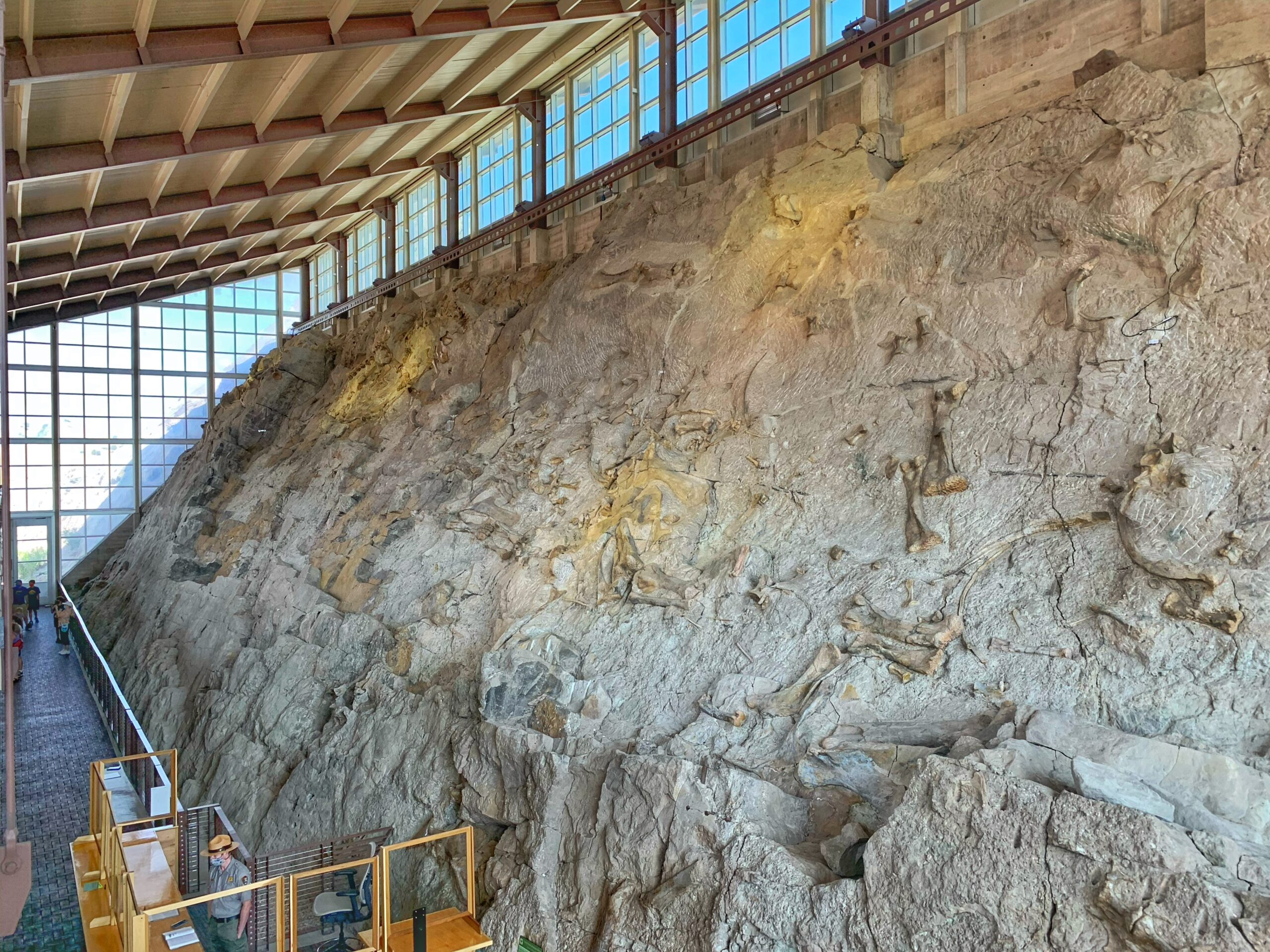 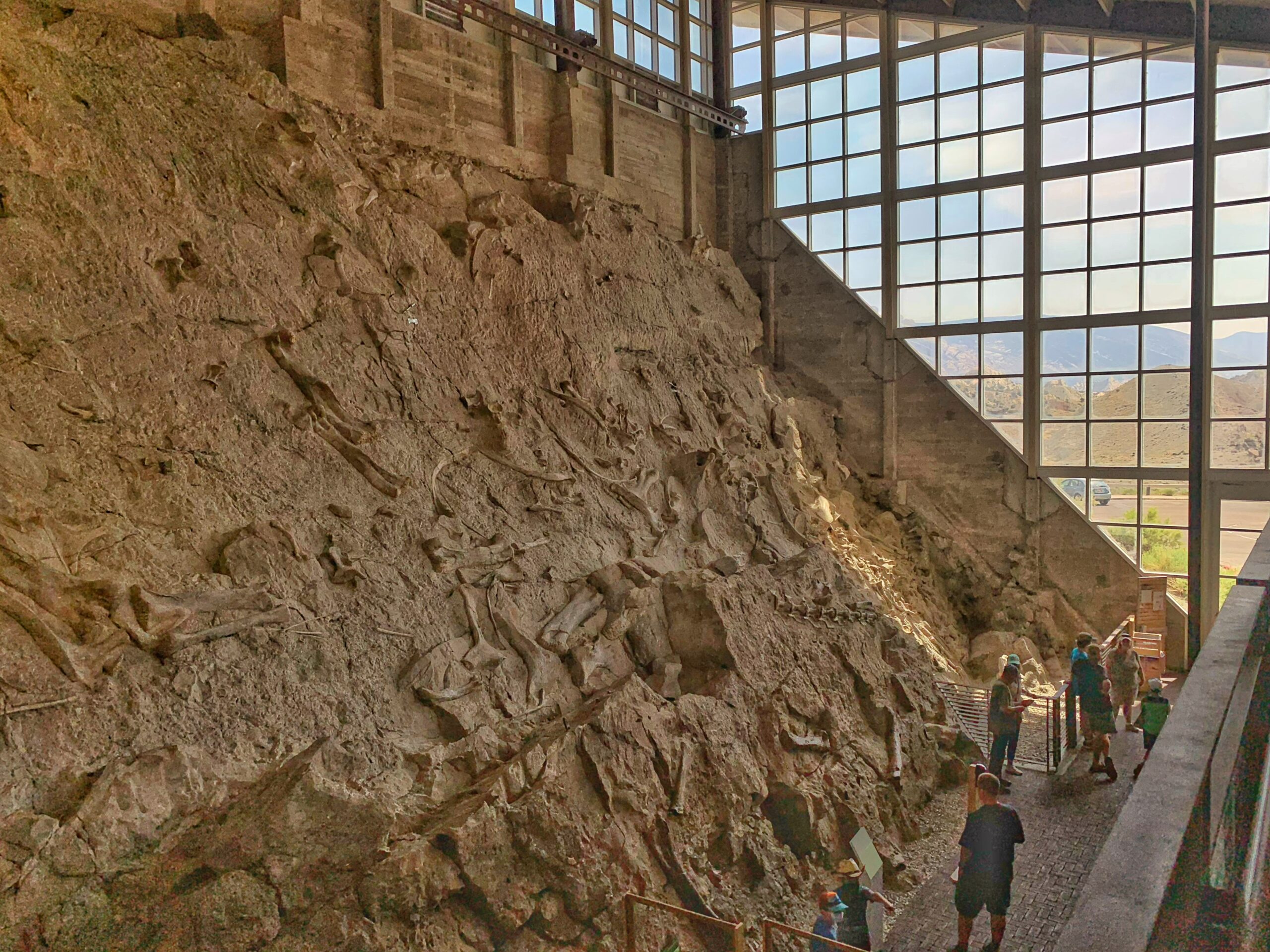 The most interesting bone was the skull at the top in this photo, just right of center. 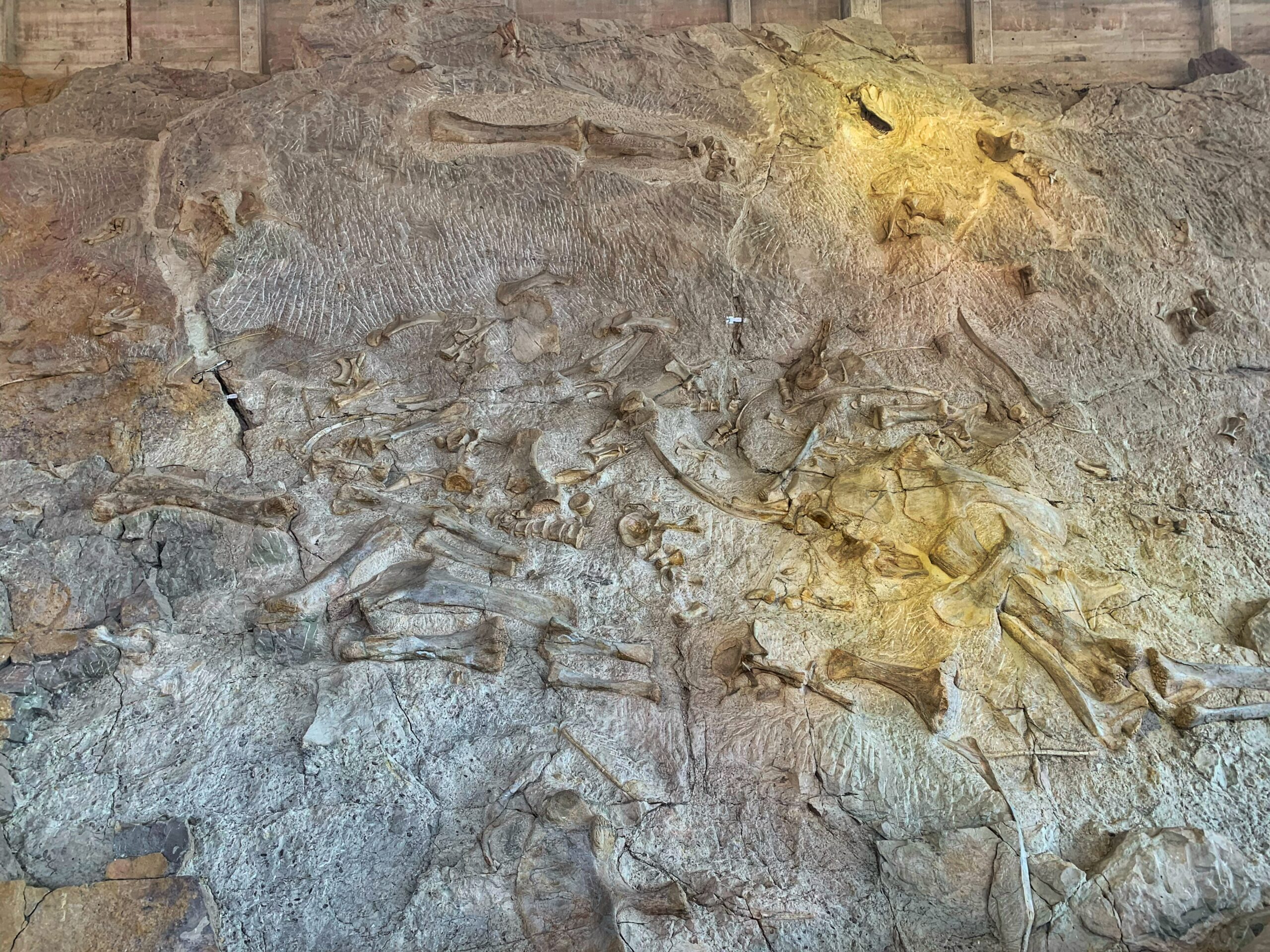 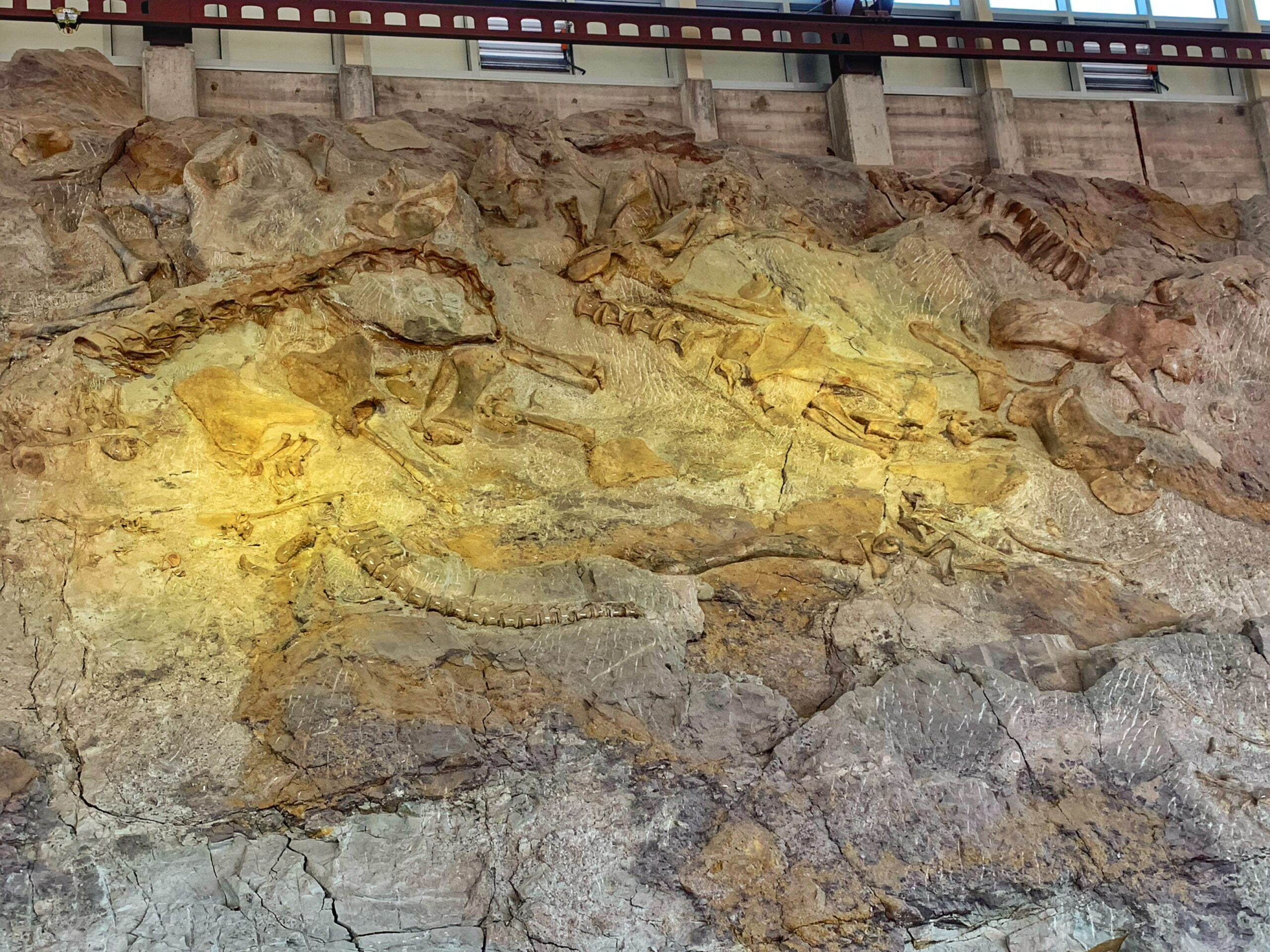 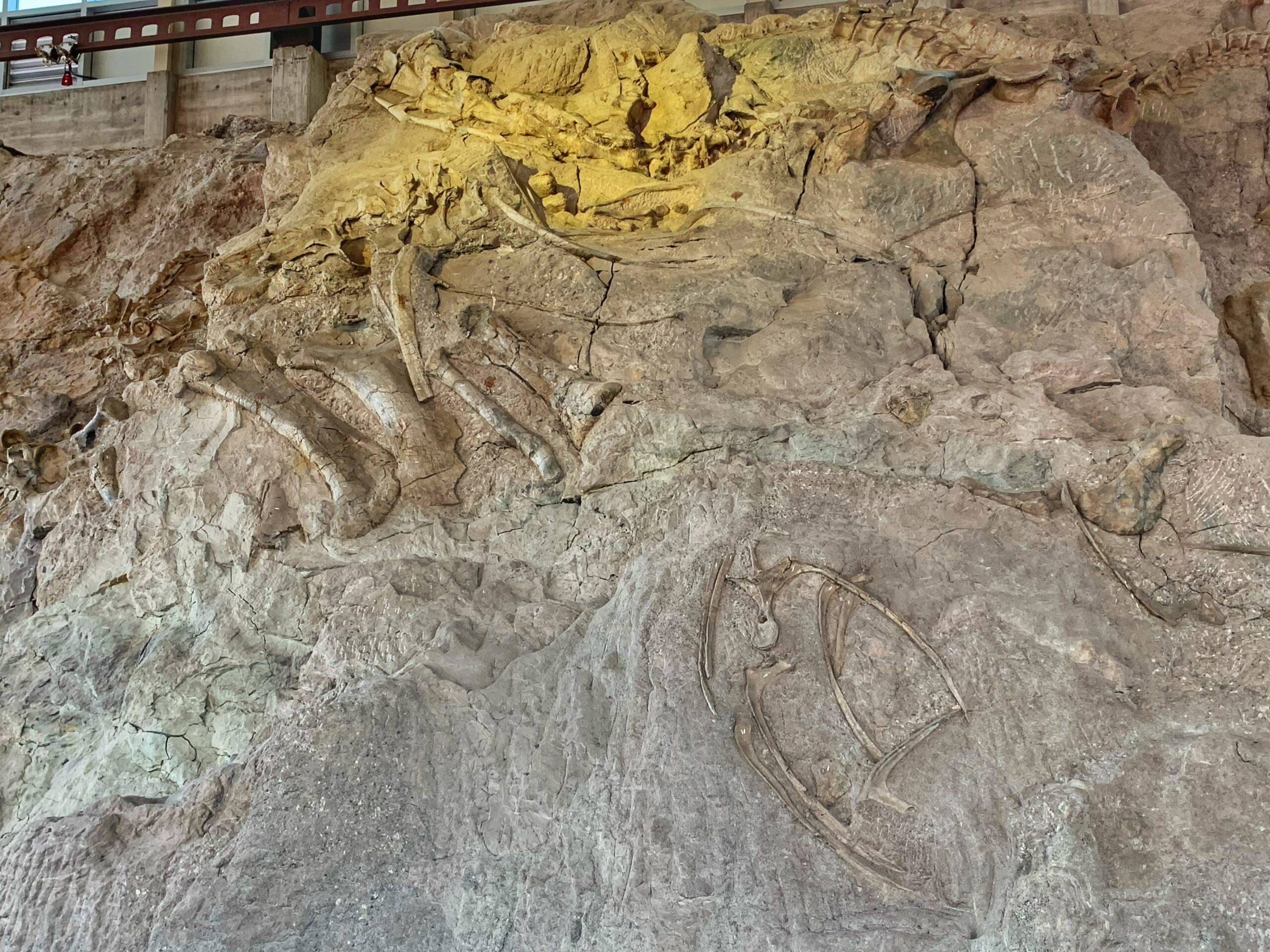 As to why all the bones ended up here, they think there may have been a flood. Who knew? 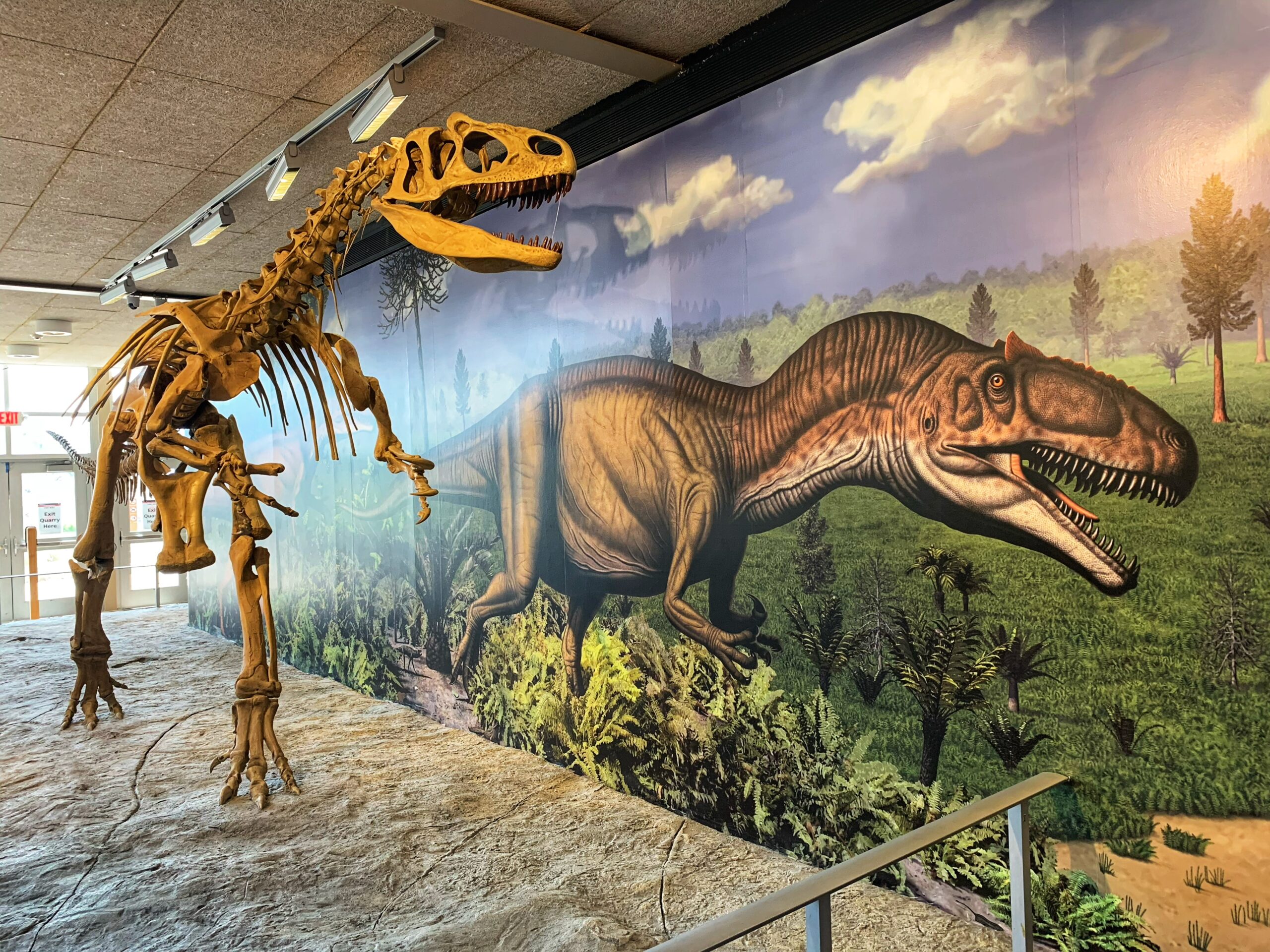 The statue of the Stegosaurus (below) is one of nine life-size dinosaur statues displayed at the Sinclair Dinoland exhibit at the 1964-65 World’s Fair in Flushing Meadows Park in New  York. I was at that fair with my mom and sister. It’s weird to think I may have seen this statue 56 years ago. It’s aged better than I have. 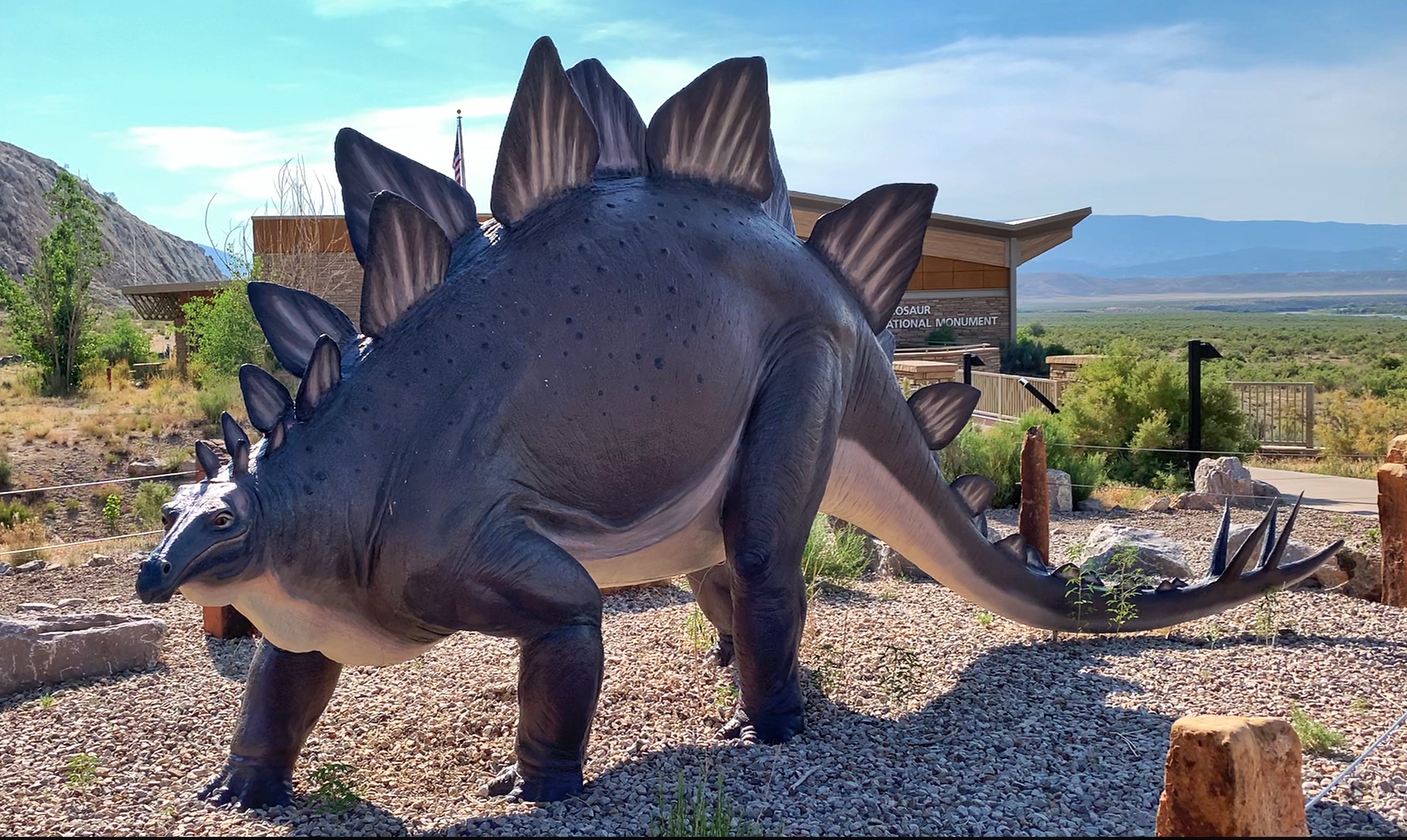 When the shuttle dropped us off back at the visitor center, we left the park and headed west across Utah. We got to Cottonwood Heights, where our hotel was, in plenty of time to take a side trip to the top of Little Cottonwood Canyon and even get out and walk along the creek for a bit. 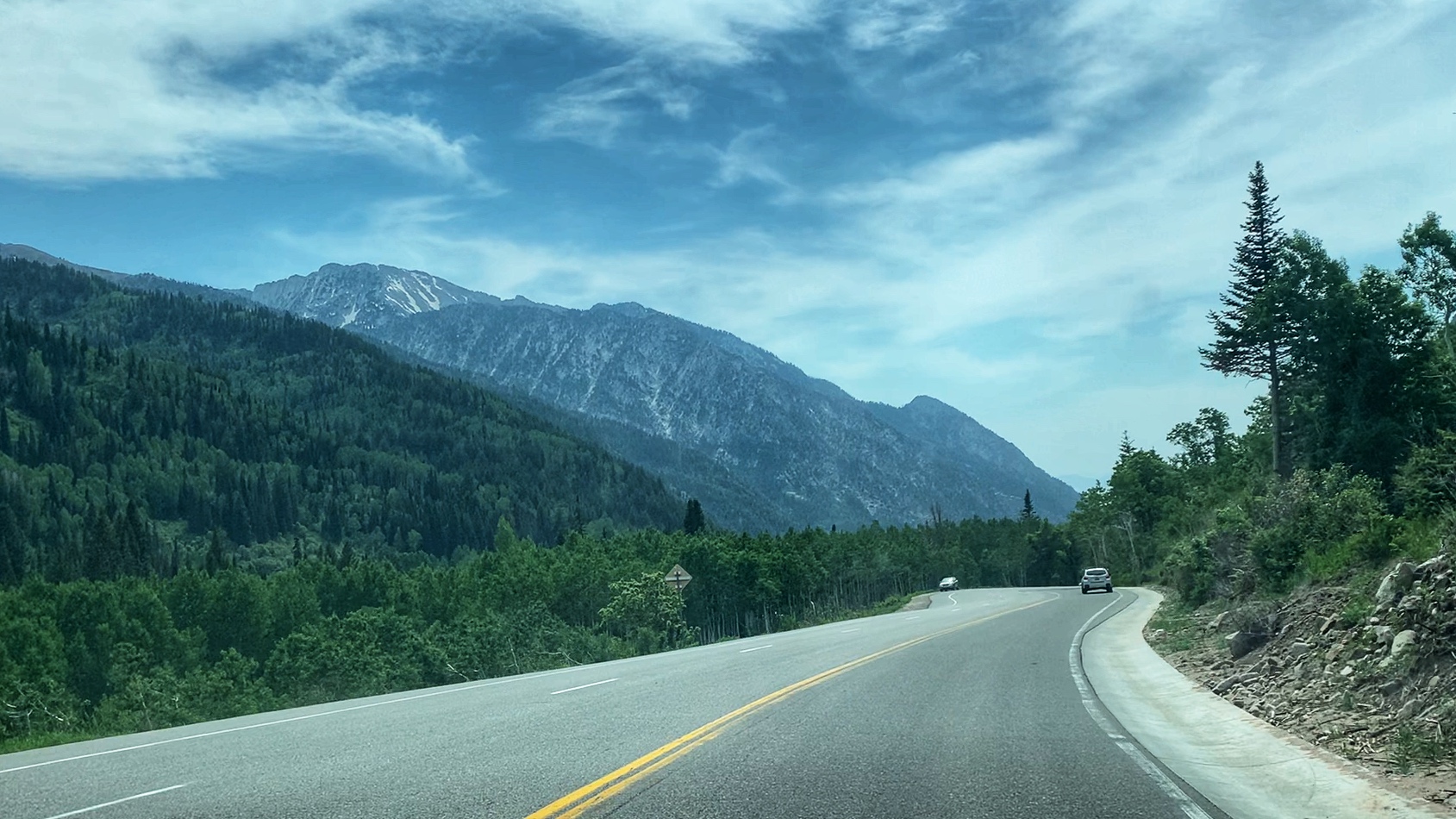 That’s the south suburbs of Salt Lake City in the haze at the bottom of the canyon. About 3 and a half million people live in Utah, 3 million of them in a patch about 90×10 miles from Ogden in the north, through Salt Lake City, to Provo in the south. 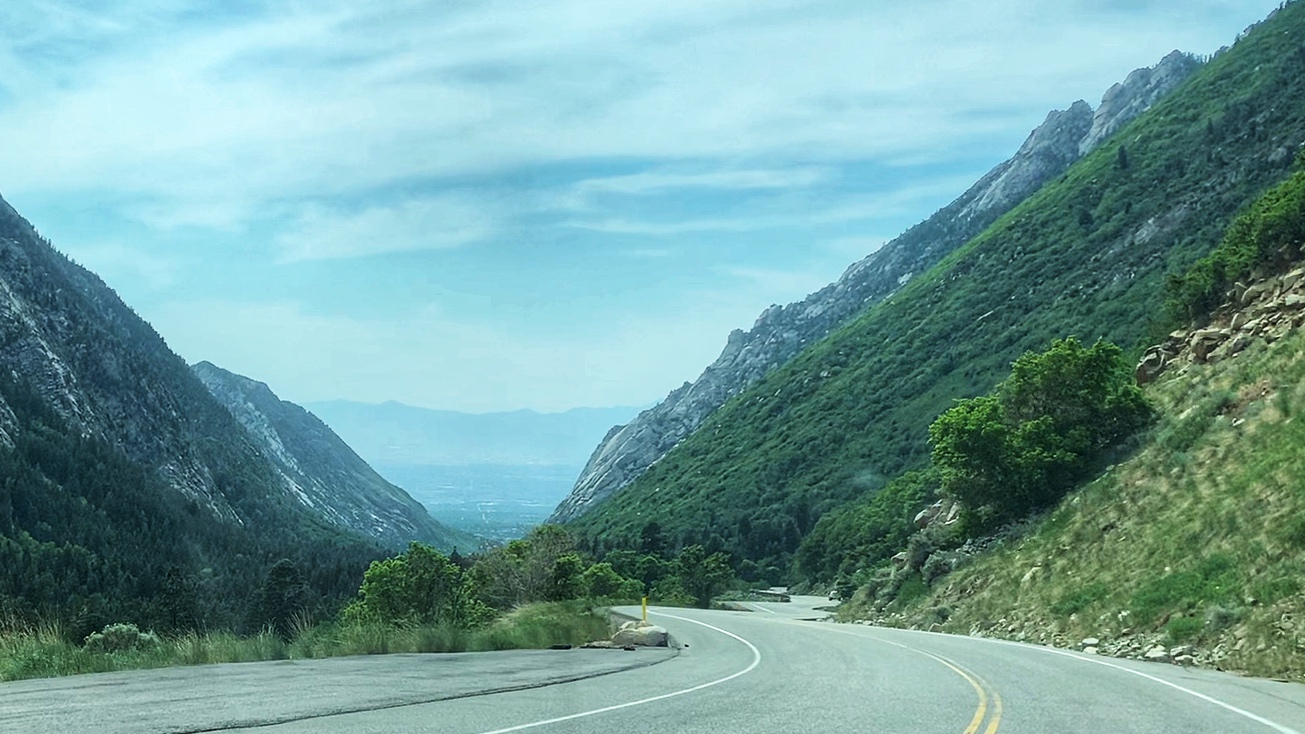 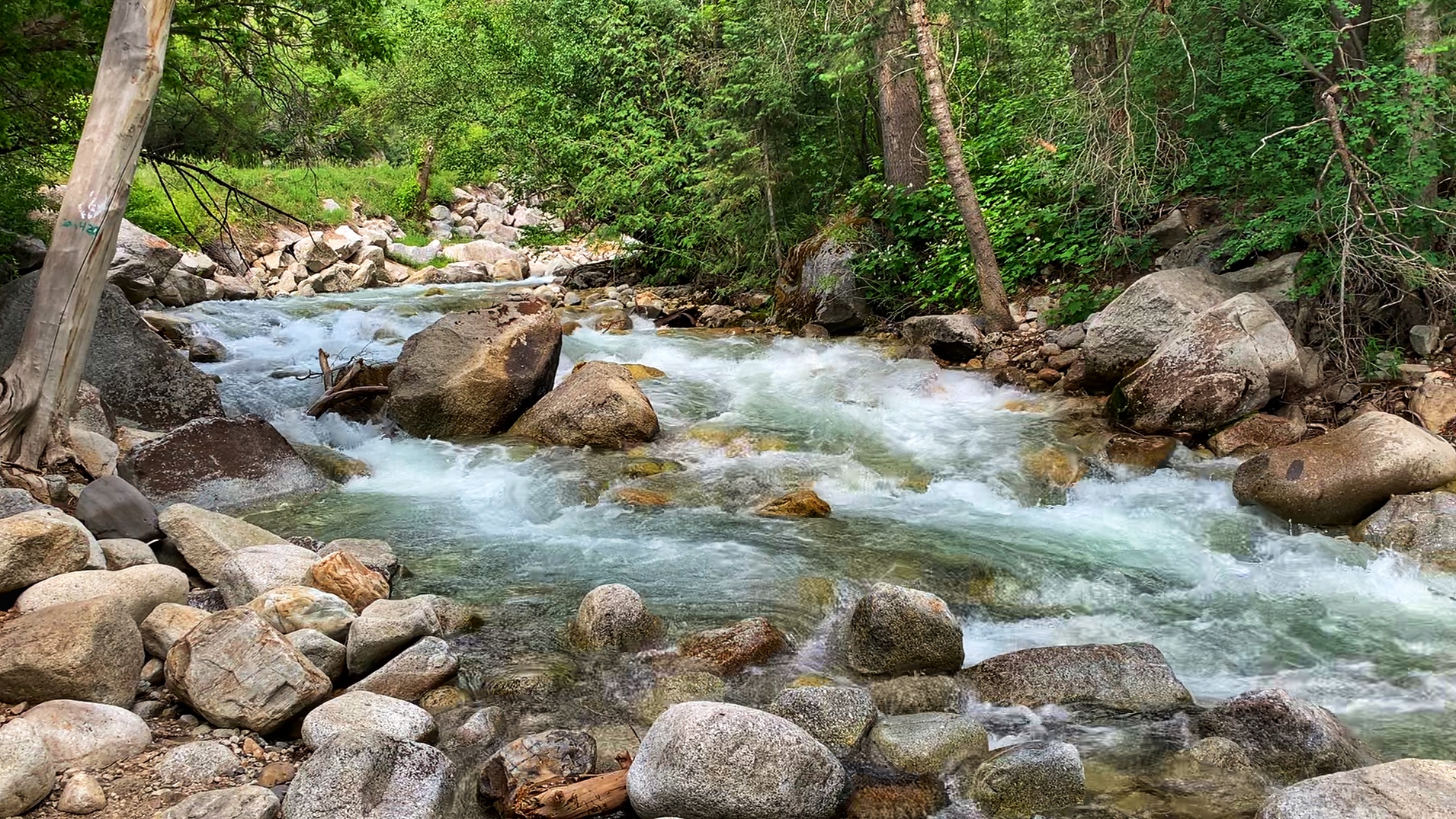 We had a hard time finding a place to eat supper—it was an upscale area with sit-down restaurants a lot fancier than what we were looking for. We ended up at Jimmy John’s. I relaxed and waiting until it was time to go owling.

This entry was posted in National Parks, Reptiles, etc.. Bookmark the permalink.