It’s hard to plan ahead in Colorado. Mid-November weekends can be 70° and sunny or 20° with snow. We planned on hiking somewhere on Saturday, but when it snowed Friday night, we decided to stick to flatter locations. We went to Garden of the Gods, which was positively crawling with people, as always. But instead of just sticking by the main rock formations, we wandered the lesser-used trails and were actually by ourselves much of the time.

We even had the Siamese Twins formation to ourselves for the couple minutes we stayed there.

The same could not be said when we wandered over to Balance Rock. The area was crawling and I had to stand in line to get a photo by the rock. 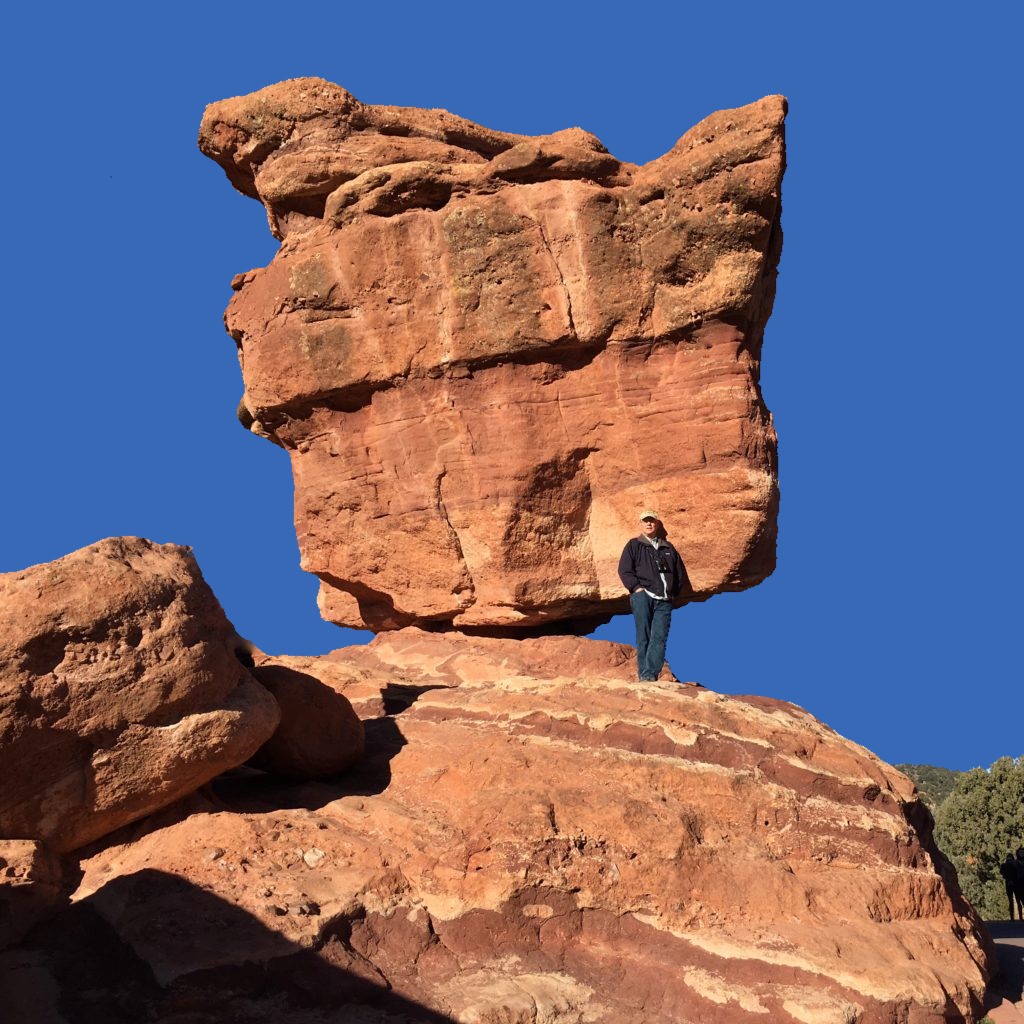 On Sunday afternoon, I decided to tackle the Palmer Reservoir Trail. I’d been there back in March, when I’d gone much further than I’d planned on going and even got lost for a bit. This time my plan was just to hike up to the upper reservoir and back. At the higher elevation, much of Friday night’s snow was still around. 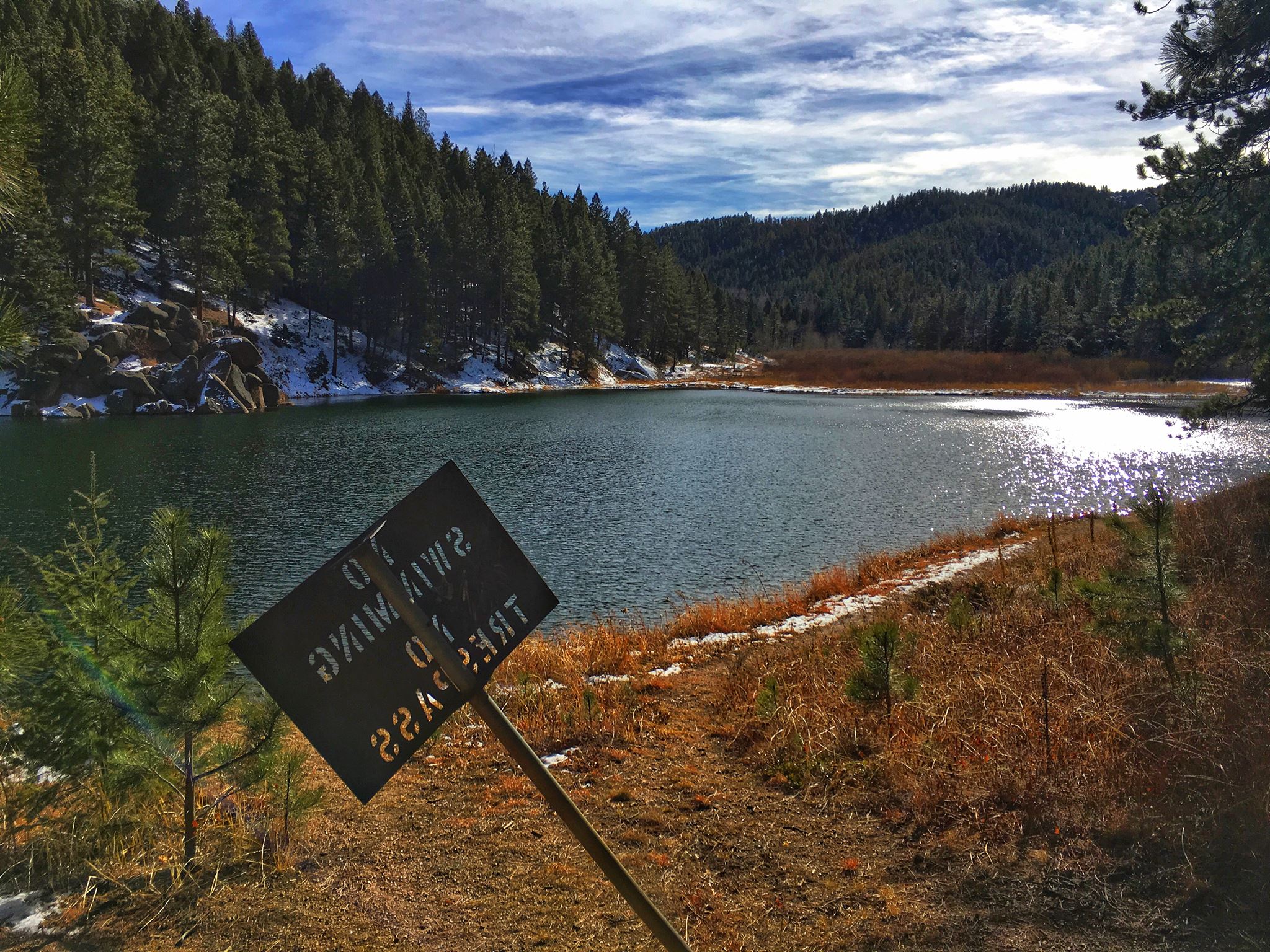 I was very proud of myself for making it to the far end of the upper reservoir without having to stop once. On my first trip, I stopped at least 20 times. I still was breathing hard this trip, but I made it. The sun was melting snow off the tree branches. 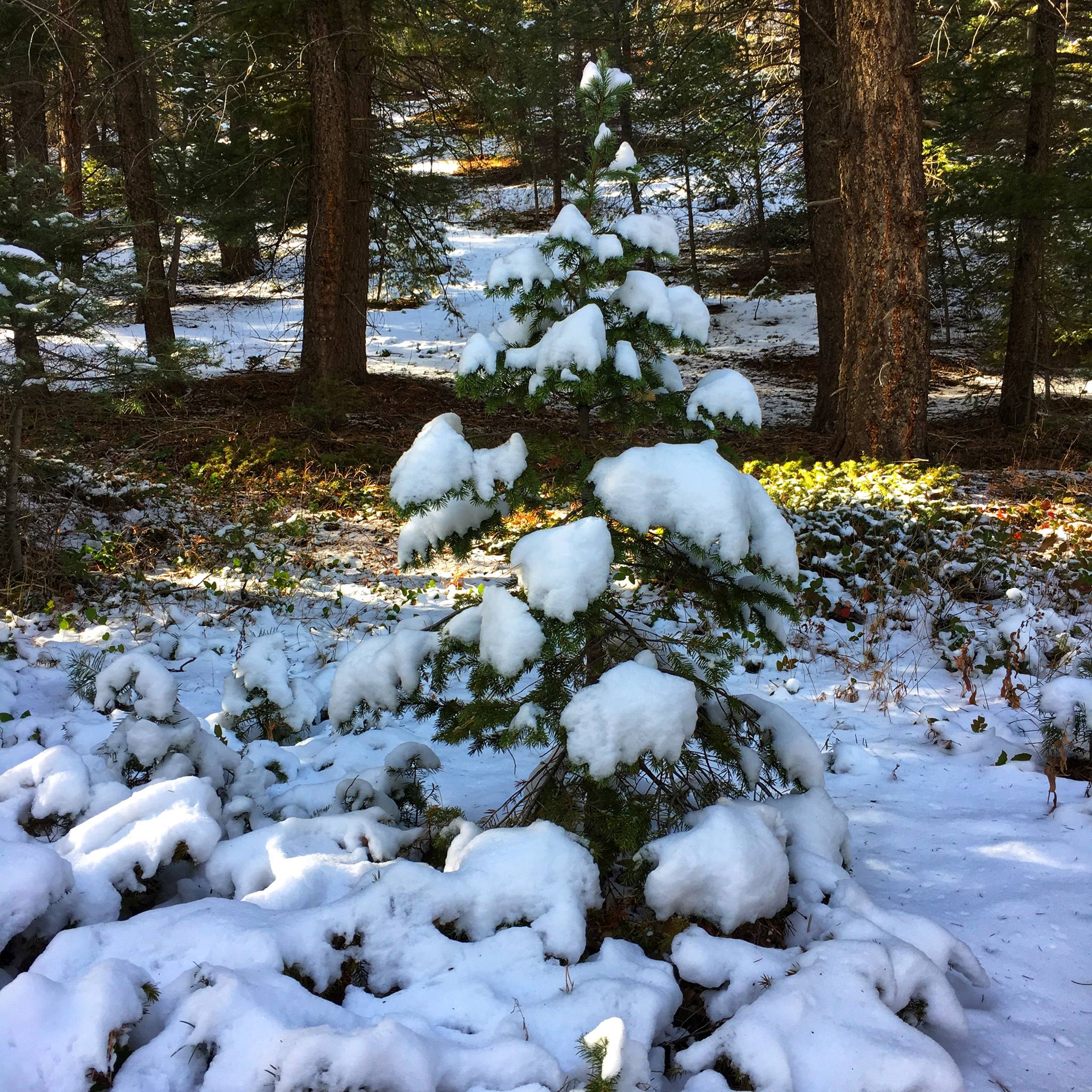 I began to wander the trail I’d discovered last time, and ended up making the entire loop. For about an hour and a half, I didn’t see another person.

When I got to the place where I’d gotten lost the last time, I messed up again and took the same wrong trail. This time there was no handy hiker to ask for directions, so I went about half a mile the wrong way before I figured it out. When I got back to where the trails branched, I couldn’t find the trail I was looking for. It was getting late in the afternoon, and if I didn’t find this trail, I would have to return the way I came—which included a hike back up a steep mountain and down the other side. I had resigned myself to do it when I remembered that I’d seen a snowman along the trail.

Could that mark the place where the right trail branched off? I walked back and finally found the right path. Next time I’ll know.

This was the Ice Cave Trail, and although I’ve never seen the ice caves, the scenery is pretty spectacular. 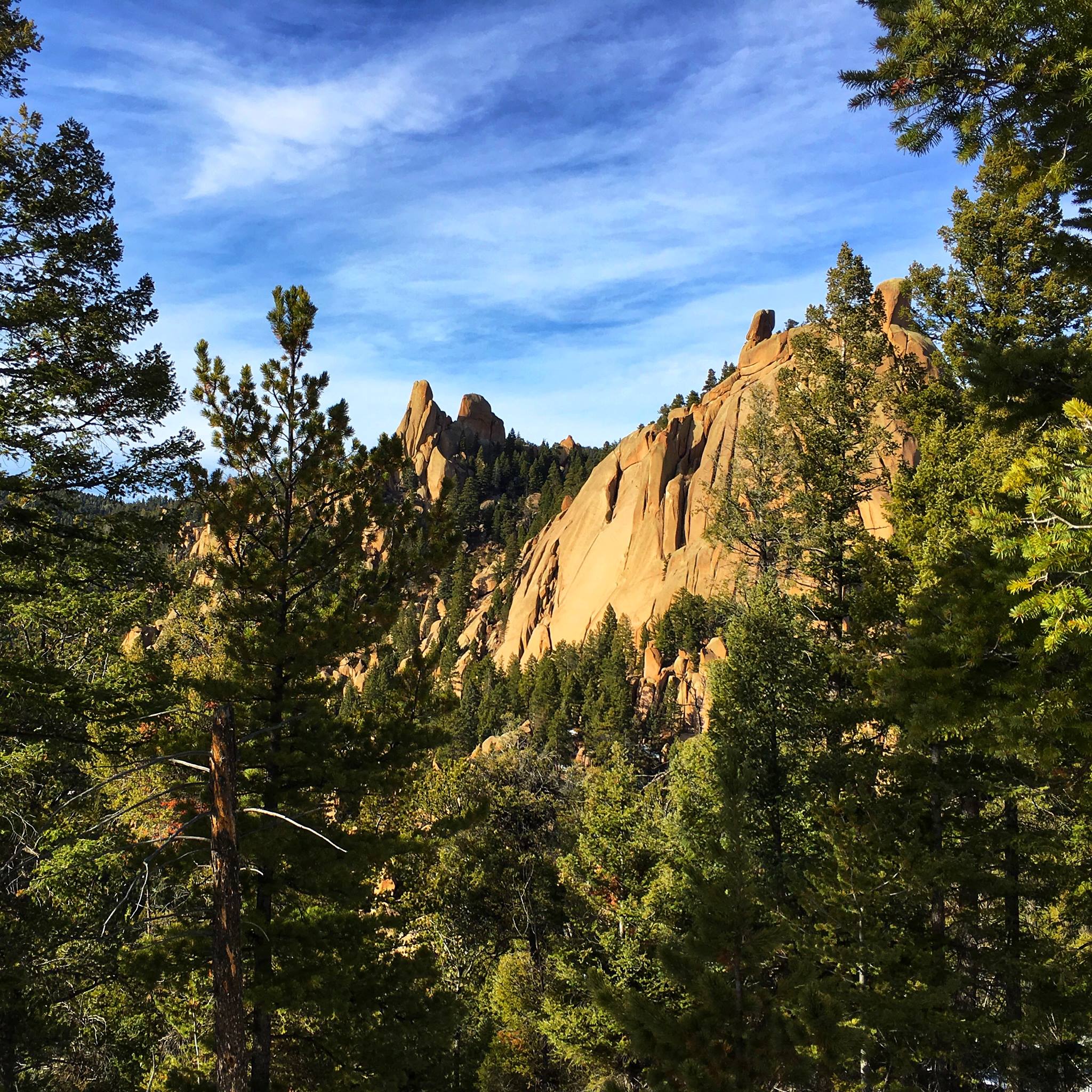 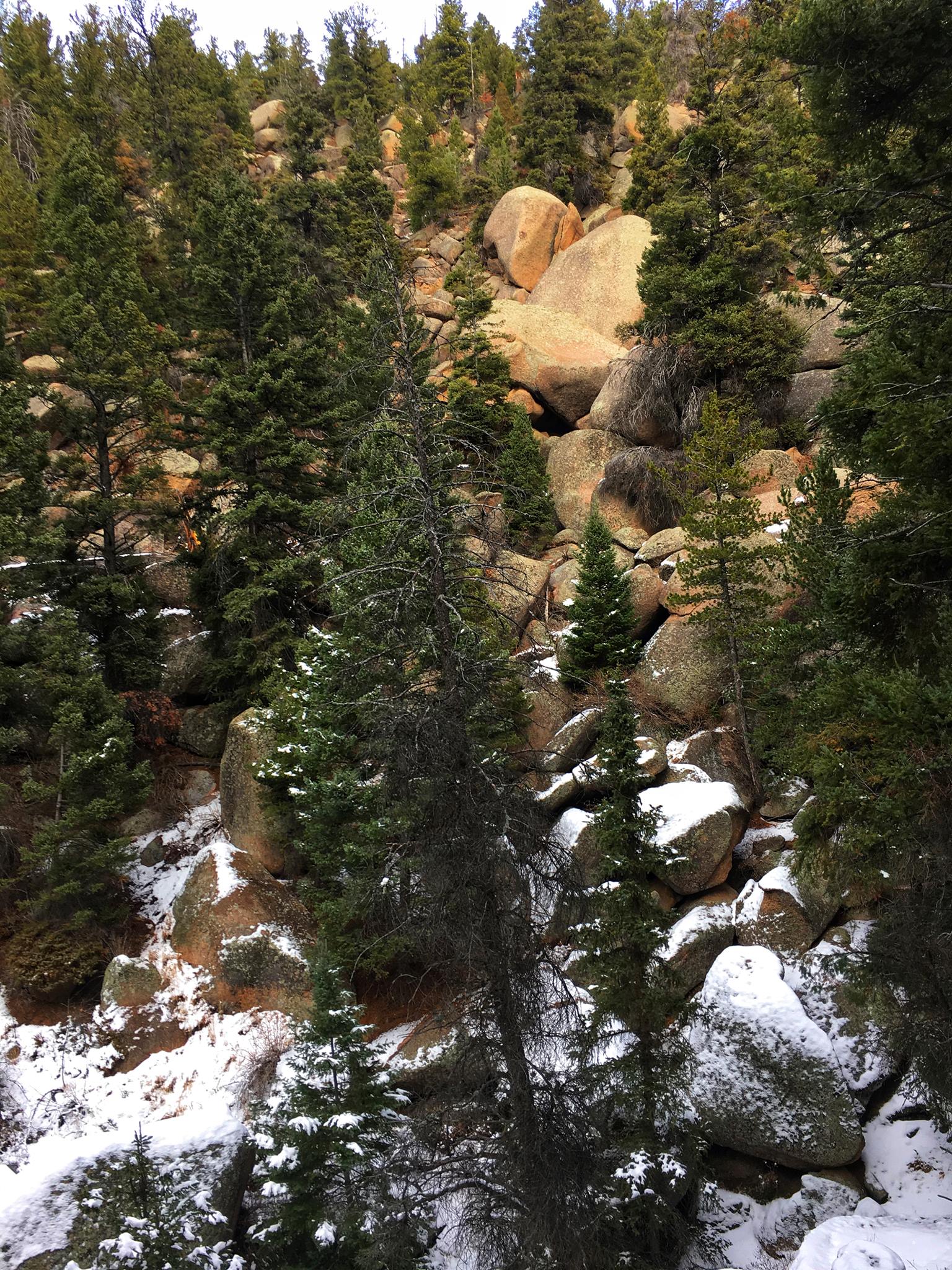 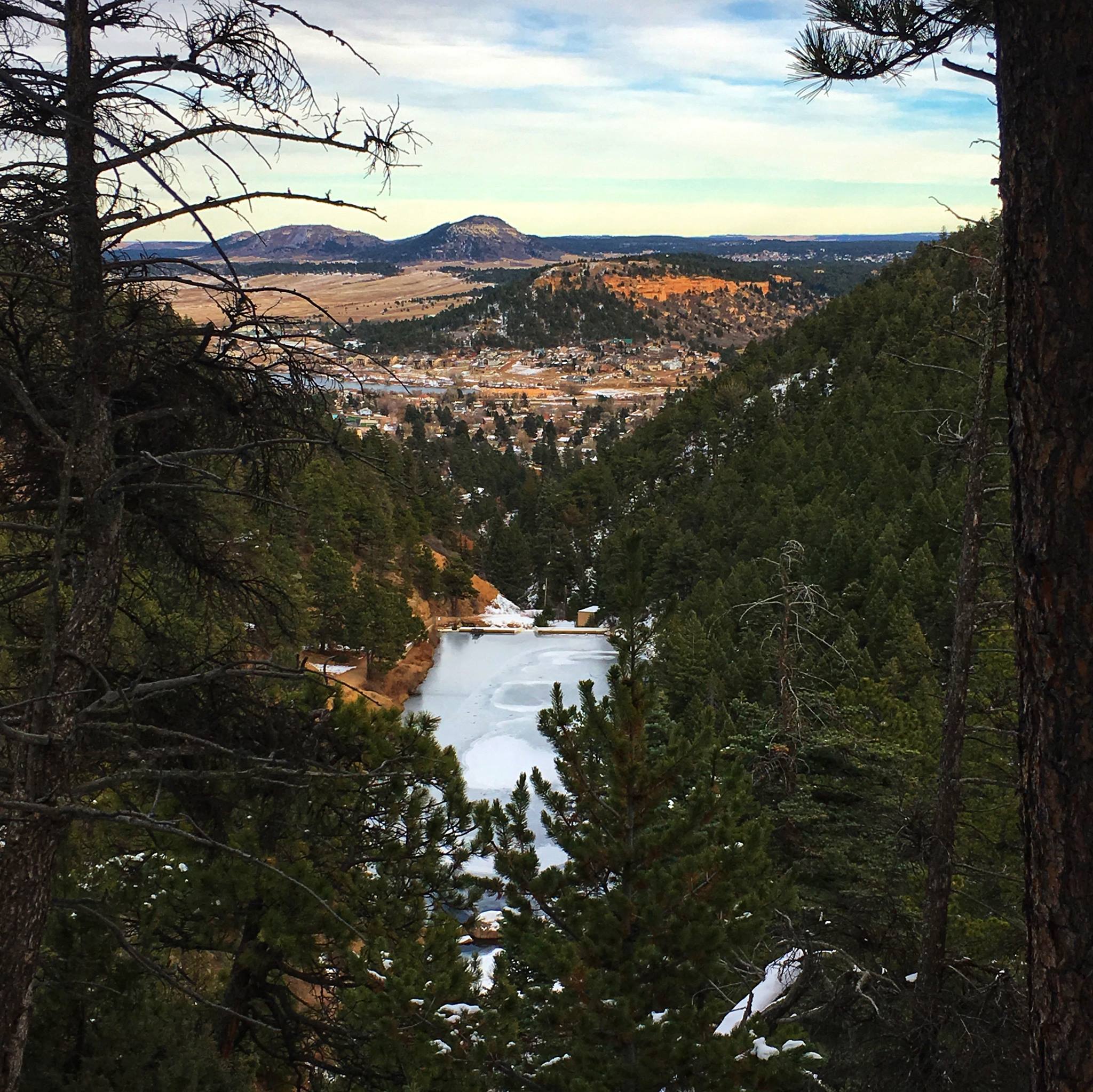 I realize that many of these photos are of the exact places that I photographed on my first hike, but how do you walk past these places without taking pictures? When I got back home, I saw that I’d gone 6.6 miles and climbed the equivalent of 105 flights of stairs. The sunset, shortly after I got home, was amazing.

On Monday I walked to work. The first light of dawn was just beginning to show as I set out. I forgot my breakfast on the counter at home, so I stopped at Mission Coffee for a cheese pastry. The sunrise was spectacular, surpassing the sunset from the night before.

This was the view to the west. 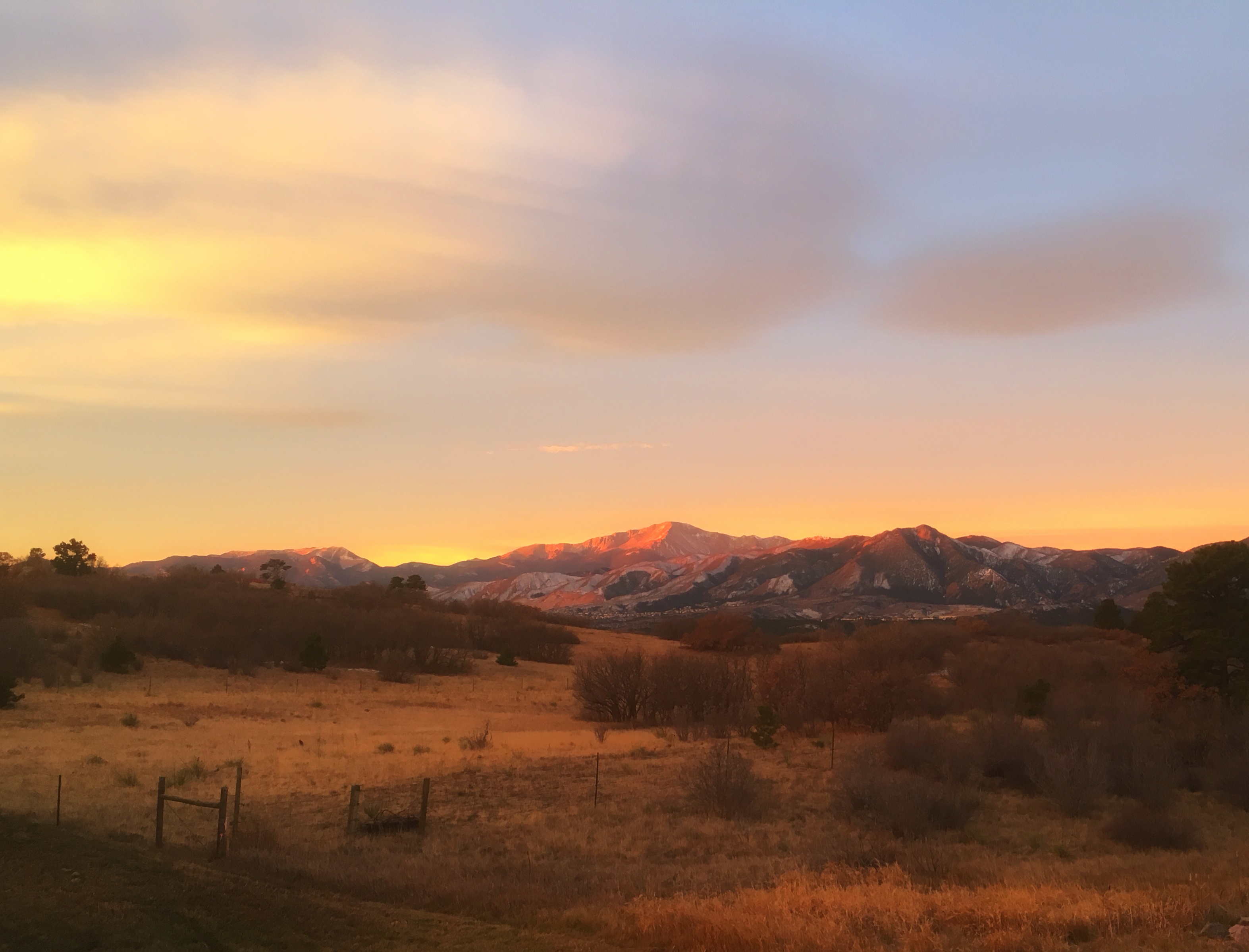 Mid-morning, there was a grass fire along I-25. The highway was closed as firefighters from the area rushed to put it out before it spread into the trees.

I walked home from work on Tuesday, as I will most days now. It was overcast and chilly—the humidity was a decidedly Chicago-like 75°. One small break in the clouds cast a beam of light down on the Air Force Academy. I stopped to take a photo just as a young woman jogged by. She looked to see what I was taking a photo of, then stopped and pulled out her camera to take one of her own. 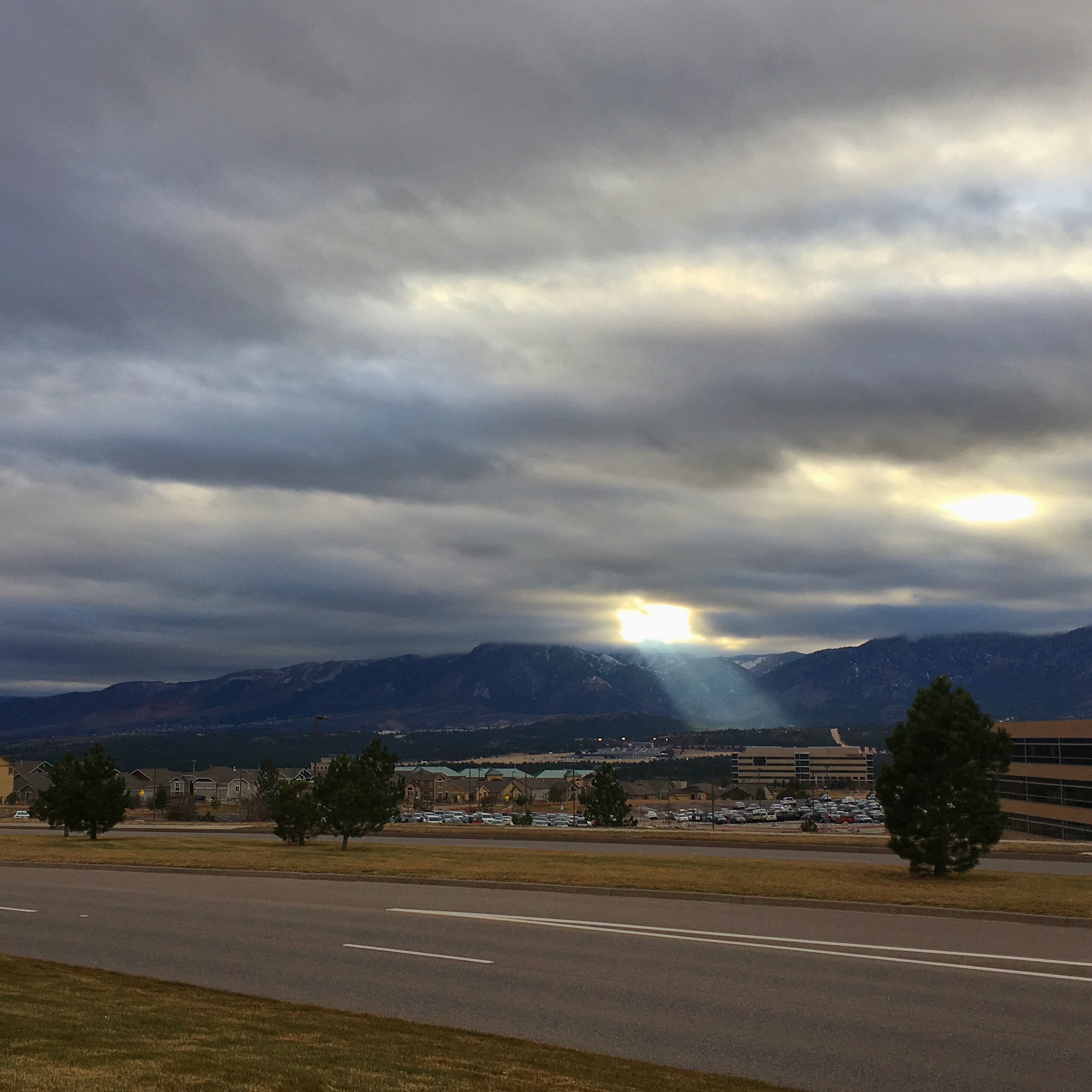