After we toured Eisenhower’s house we toured the battlefield. The rest of my family planned on spending the afternoon shopping, and I planned to tour the battlefield again, so we didn’t stop often or take very long. We were surprised by how dilapidated the town of Gettysburg was. It looked like its heyday was 20 years ago, and it even had a slum. We walked up the Oak Ridge observation tower, wandered around Little Round Top (above) for a bit and pulled over on Culp’s Hill to rescue a turtle that was walking across the road.

When we got back to the visitor center, we did a quick tour of the museum, then split up. I ate a quick lunch at McDonald’s, then headed to the Cyclorama. The painting was interesting, but the narration was minimal. It was a big disappointment compared to the one in Atlanta.

I walked around the High Water Mark tour where the Union Army stopped Pickett’s Charge. I noticed something that held true all day. The visitor center was packed, the roads were lined with slow-moving cars, but as soon as I wandered 10 yards off the road I was alone. There was nobody wandering through the fields or even along the trails. The only place all day that I saw anybody off the beaten track was at Devil’s Den, and that was just kids climbing rocks.

I walked to Meade’s Headquarters, then climbed Cemetery Ridge past Meade’s statue to the High Water Mark. There was an Eastern Bluebird perched on top of his head, which looked comical. 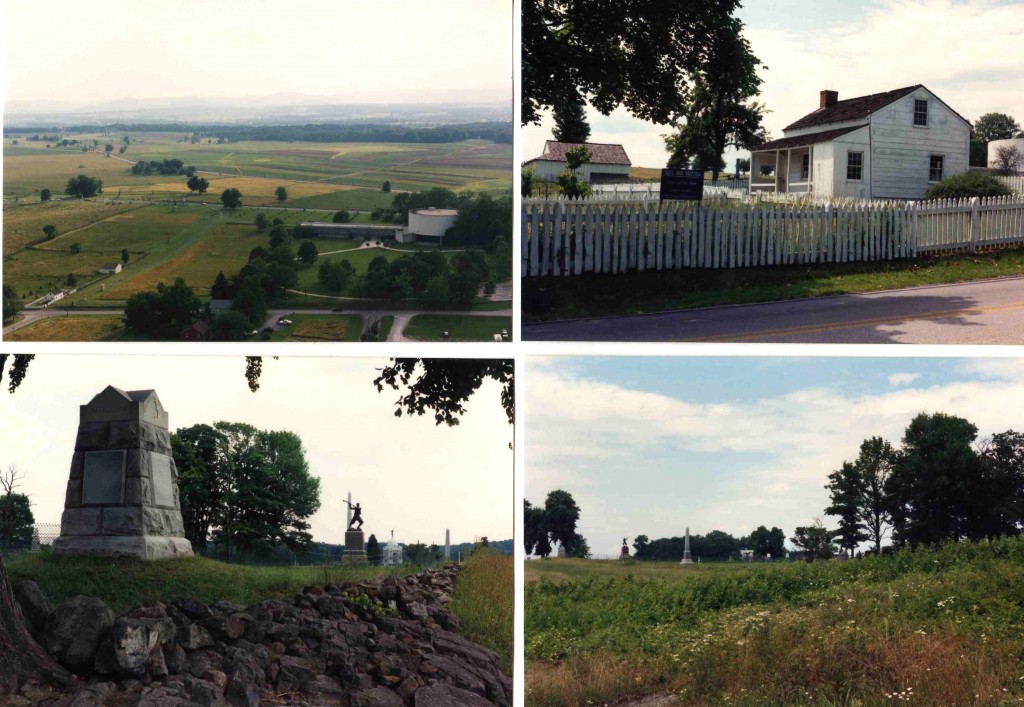 I got back in the car and drove to the Warfield Ridge observation tower, then stopped at Devil’s Den and climbed around on the rocks. It was hard to imagine a battle in this area — it was filled with crannies and hidden holes that snipers could hide in. I heard that just a few years before our visit somebody had found a Civil War backpack, full of stuff and in good shape, tucked way back in one of the crevices. 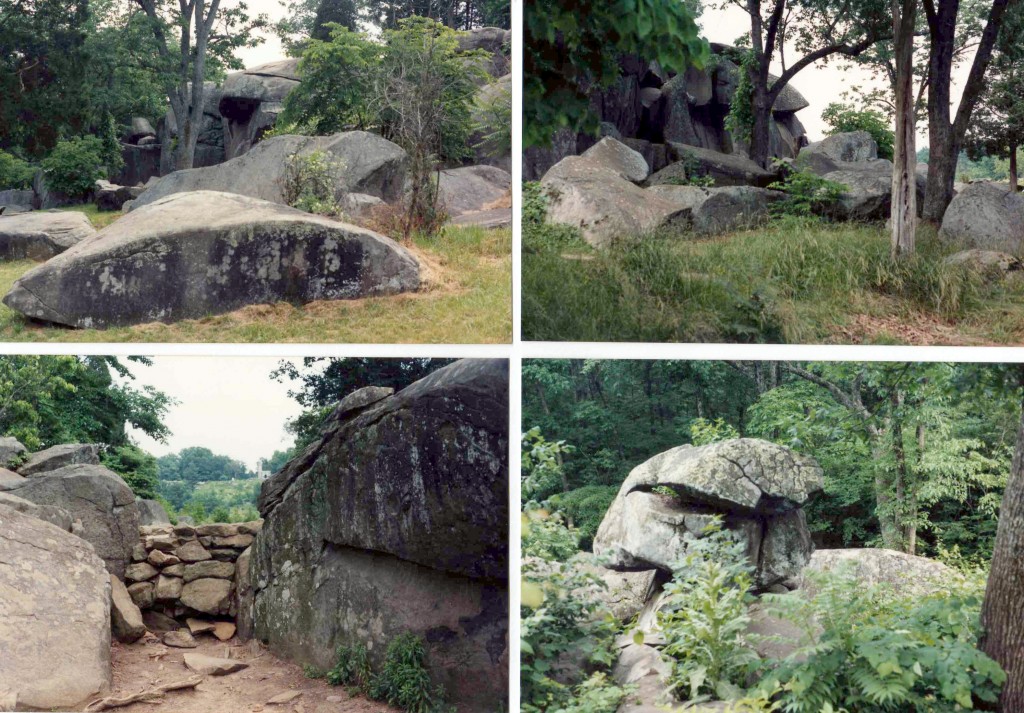 I was distracted by a Pileated Woodpecker that flew into the woods nearby. I tracked it down and took some video, then met my family at the National Tower. The displays in the tower were worn and often irrelevant. The view was nice, but not great. We stayed about 20 minutes, then headed down, vowing never to return. (And since it has since been torn down, we never will.)

My family gave up at this point and headed back to our hotel in Hagerstown. I wasn’t about to leave while there was still light. I went into high-speed mode. I drove to the East Cavalry Battlefield Site and saw … a field. There were no signs. In fact, the entire park was woefully short of interpretive signs. Most other battlefields I’ve been to do a much better job. The one thing I didn’t do was pay much attention to the hundreds of statues and monuments that were everywhere. But these four caught my eye. Top left: Robert E. Lee on the Virginia Monument on Seminary Ridge. Top right: John Burns, a Gettysburg civilian who grabbed his rifle and fought with the Union army. Bottom left: The Soldiers’ National Monument. Bottom right: ? 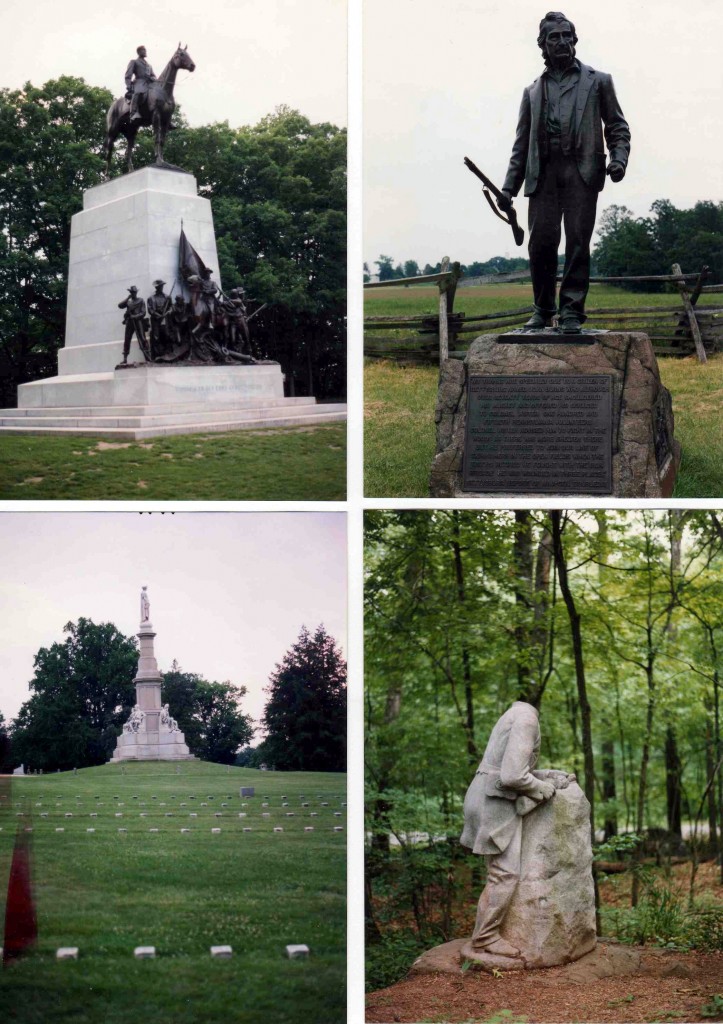 I headed back to the north side of town, to Barlow’s Knoll, the Railroad Cut, McPherson’s farm (where the battle began), the Peach Orchard, the Wheat Field, Lee’s statue … 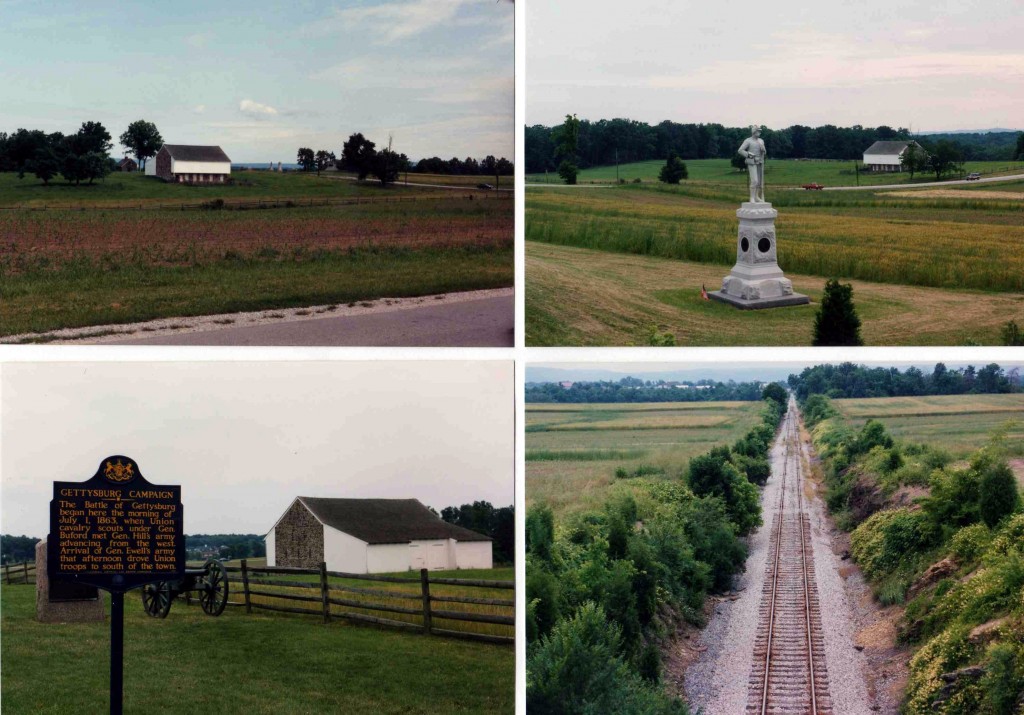 It was getting close to dark and I had time to choose one last spot. I headed for the National Cemetery. It was empty. I saw the Soldier’s National Monument, located where Lincoln gave his address. I found the Evergreen Cemetery gatehouse and wandered around the north end of Cemetery Hill. I headed back through the cemetery looking at graves of soldiers who have died in other wars and stopped at the Gettysburg Address monument before heading back to the hotel. I stopped at Hardy’s for supper and got back to my family at 10:00 pm after a long, tiring but satisfying day. But I want to go back. 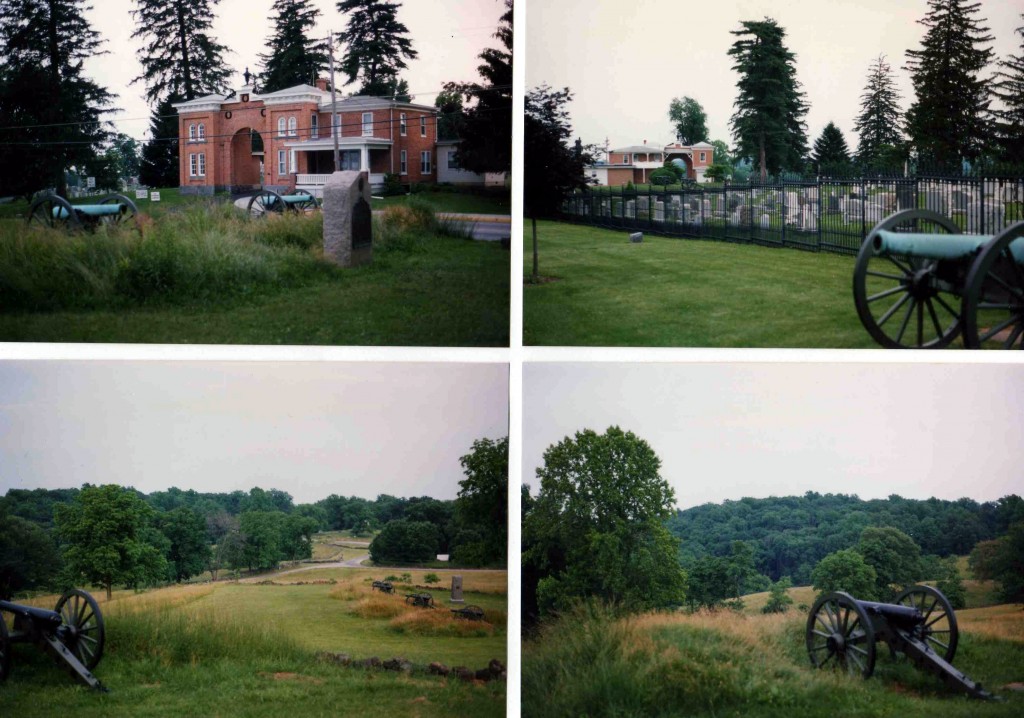