Almost everywhere we went in the San Luis Valley, we could see the huge sand dunes piled up against the Sangre de Cristo Mountains. From a distance, they were dwarfed by the mountains. 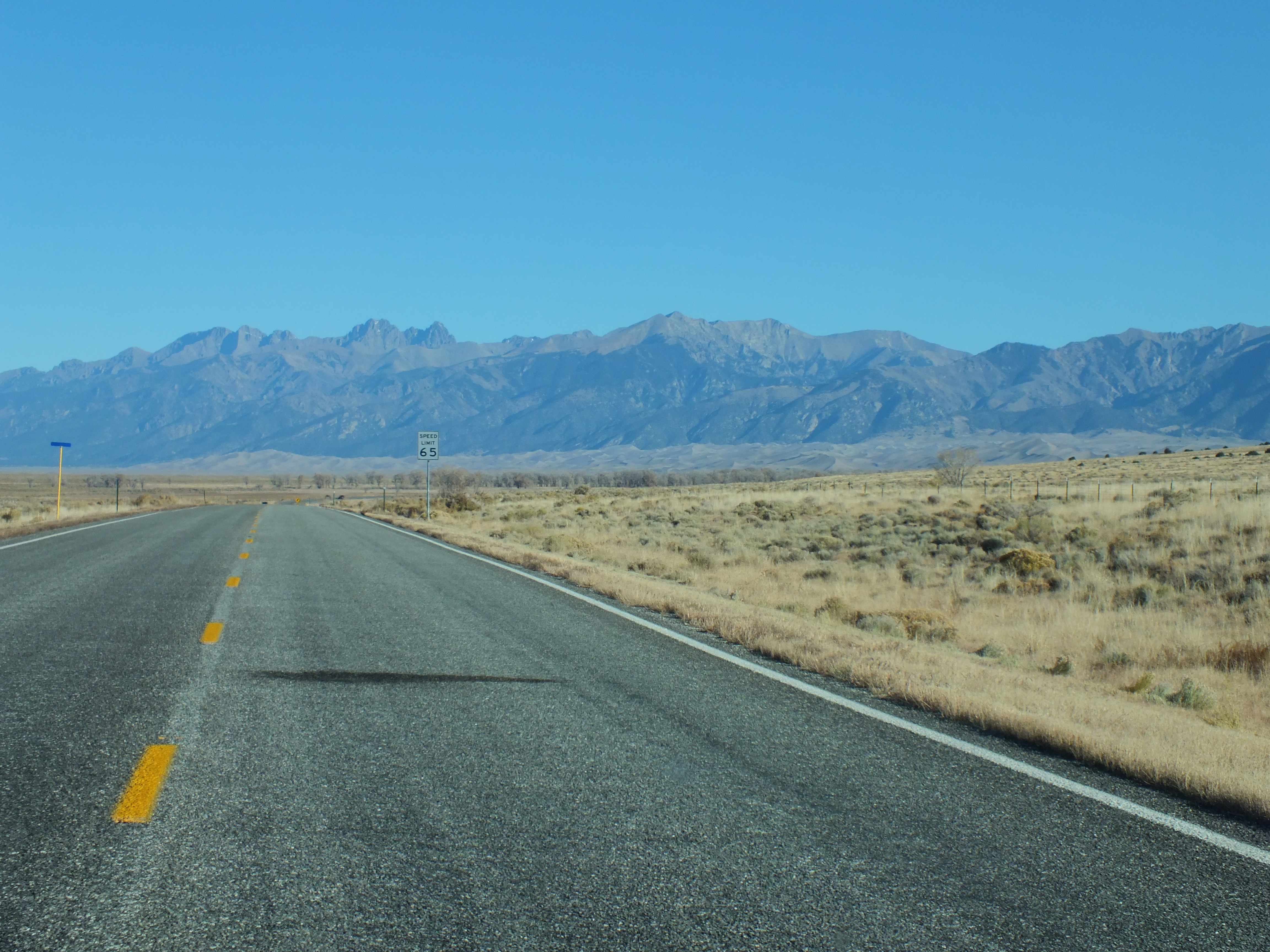 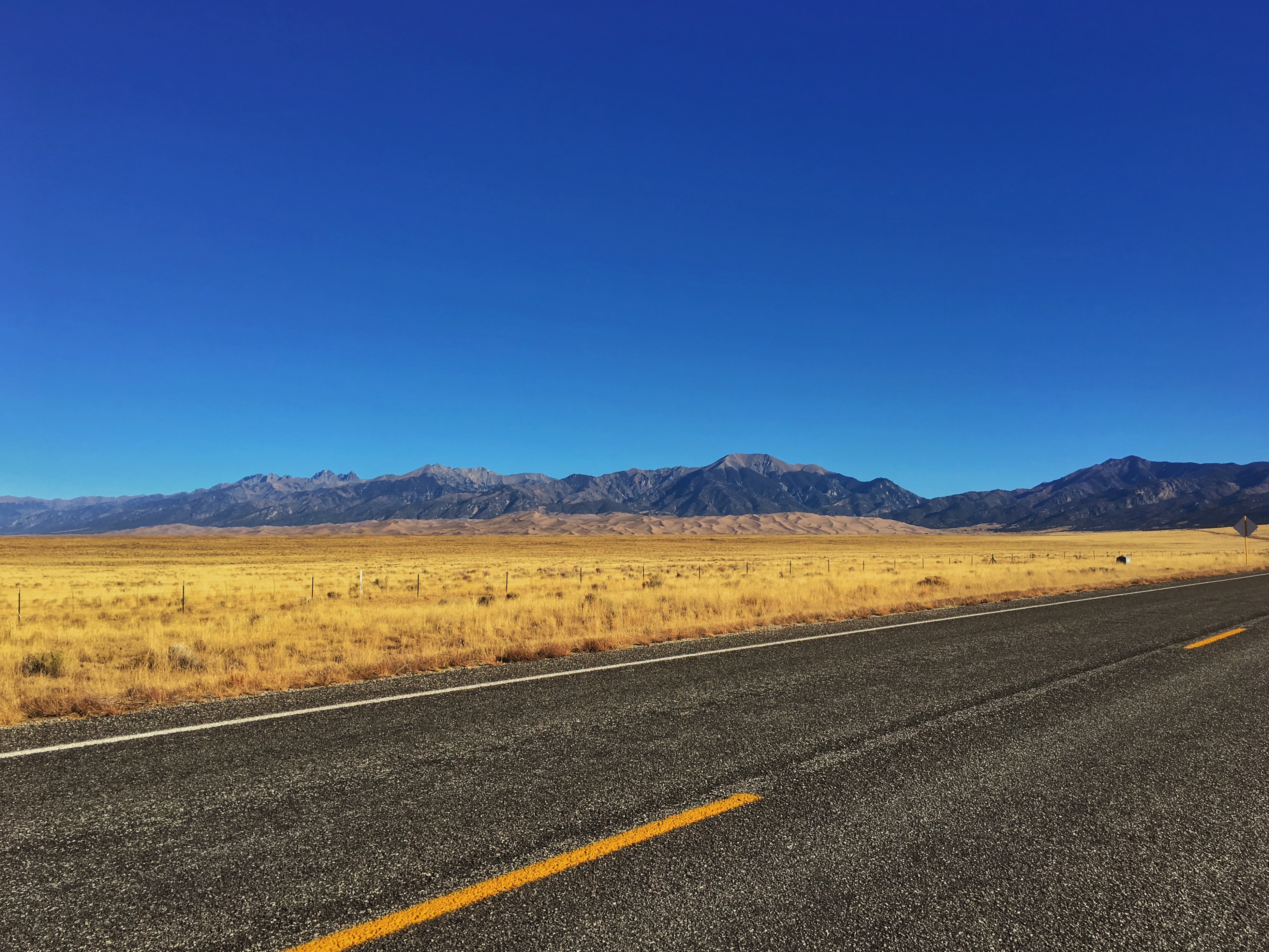 They got impressively larger as we drove north along the entrance road into Great Sand Dunes National Park, but I was distracted by a flock of Pinyon Jays and didn’t take any photos. We stopped in the visitor center, then parked in the lot nearest the dunes.

A sign informed us that High Dune, the tallest dune on the first ridge, was 699 feet high and a mile and a half away. Star Dune, the tallest in the park, is 56 feet taller, but it sits at a lower spot and so the top isn’t as high. It’s also a mile and a half farther into the dune field. Reaching either of them looked like a lot of work. People on top of the ridge looked like ants. 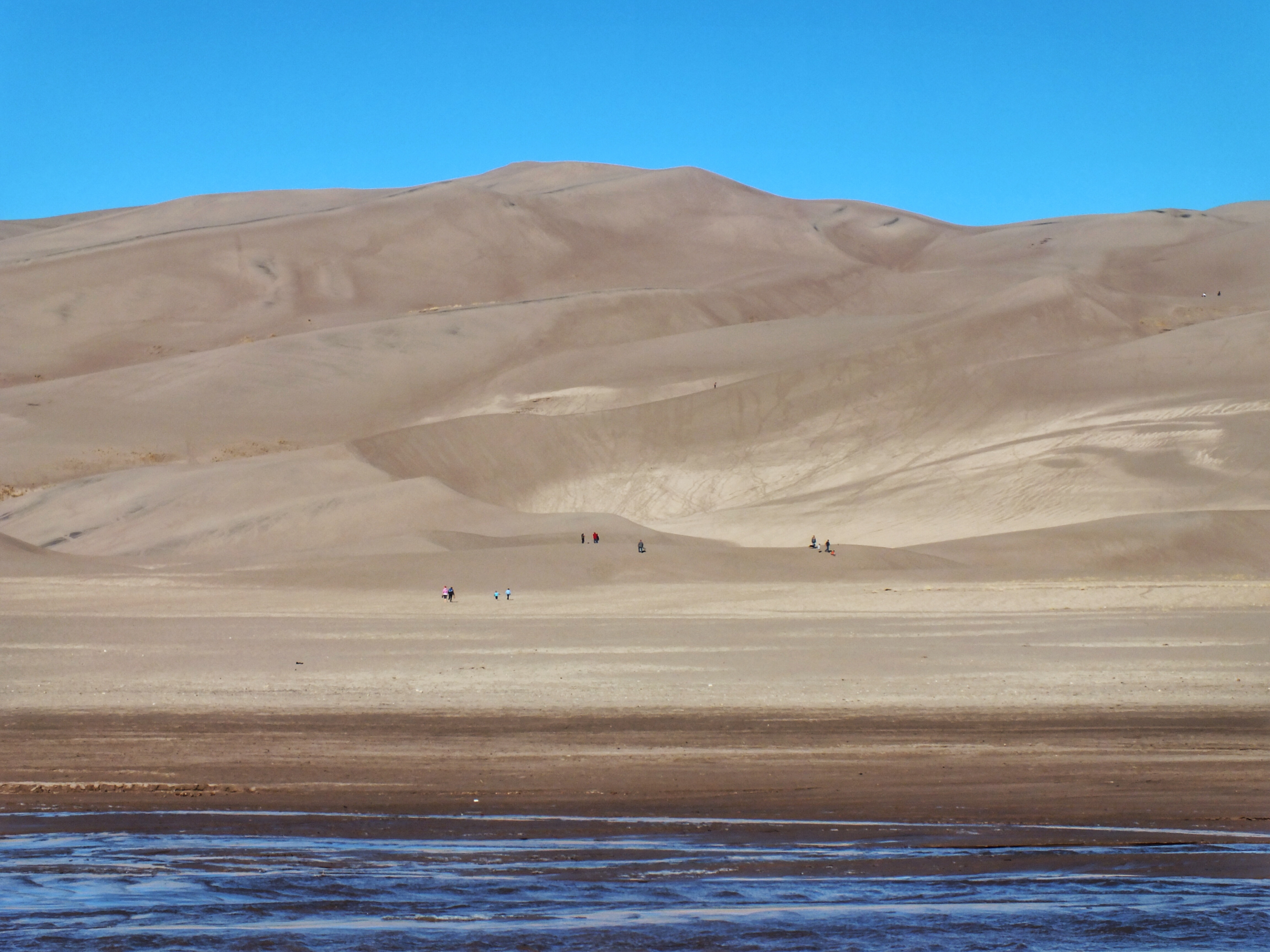 Medano Creek ran shallow and partly frozen across the flats between us and the sand. I waded across. I only intended to walk to the base of the dunes. The sand, even on the flats, was loose, which made for hard slogging. 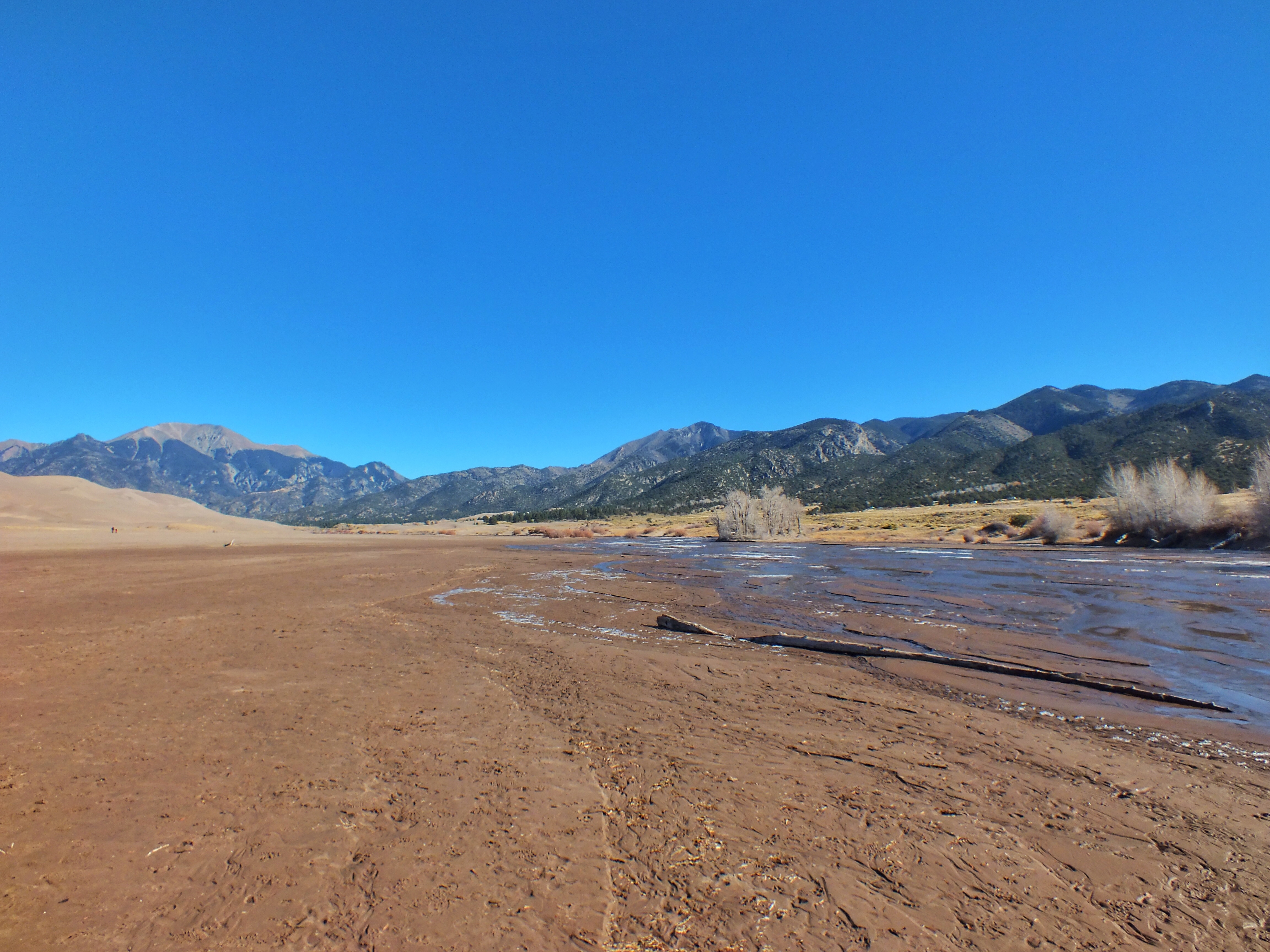 When I got to the base of the dunes, I decided to hike a little farther to get better photos. 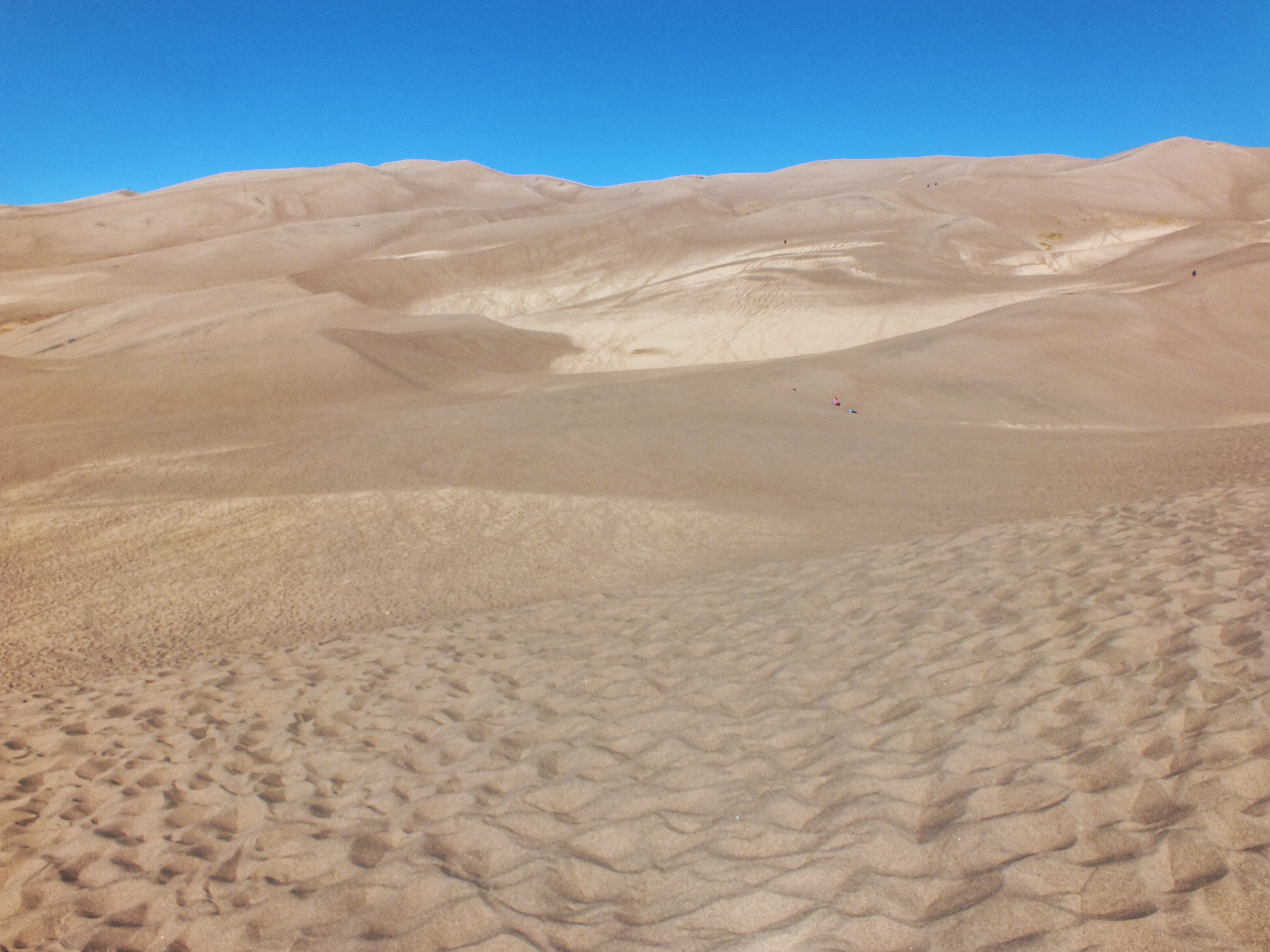 Then I decided to hike to the top of a dune about a third of the way up. Each step was a labor, with my feet sinking and slipping back constantly.

I struggled up a steep section, passing a young woman who was on the way down. I told her it seemed easier in the direction she was going, and she laughed and agreed that that was the case.

There were sections of sand that looked damp. I tried walking on them to see if I could get more purchase. I couldn’t. I angled over to one of the patches of grass to see if they gave me a better grip. Nope. Then I somehow figured it out. If I walked in the paths where everyone else walked, the sand was loose and walking was miserable. But if I got away from those paths, the surface of the sand was rippled. 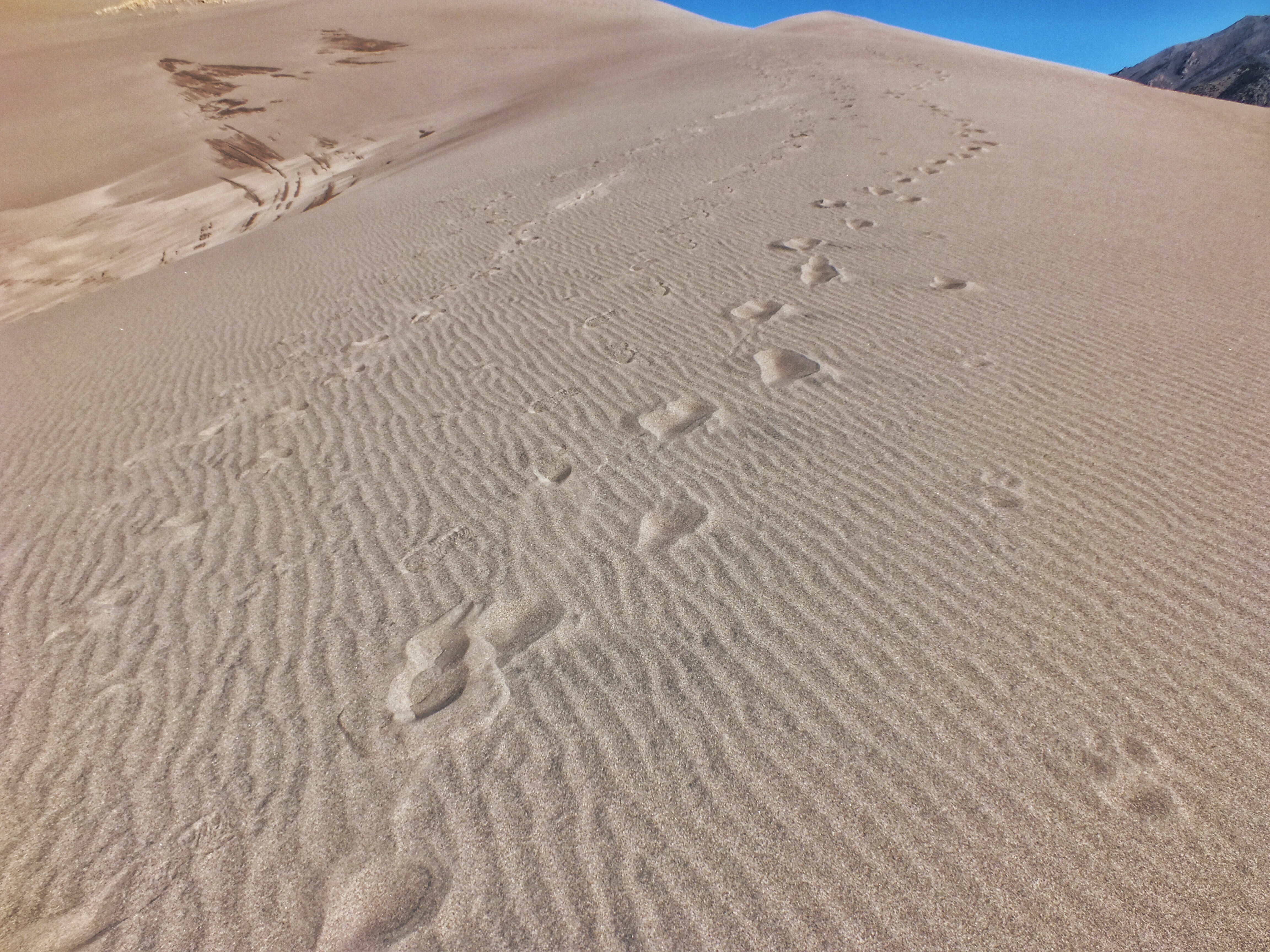 Somehow I figured out that if I kept as close as I could to a 90° angle to the creases and walked flat-footed, my feet wouldn’t slip most of the time. Occasionally a step would sink in and I would lose momentum. It was like walking on crusted snow only to have a boot break through every seven steps. But most of the time, it was pretty easy.

Once I figured out how to walk, I decided to climb to a lower part of the first ridge. 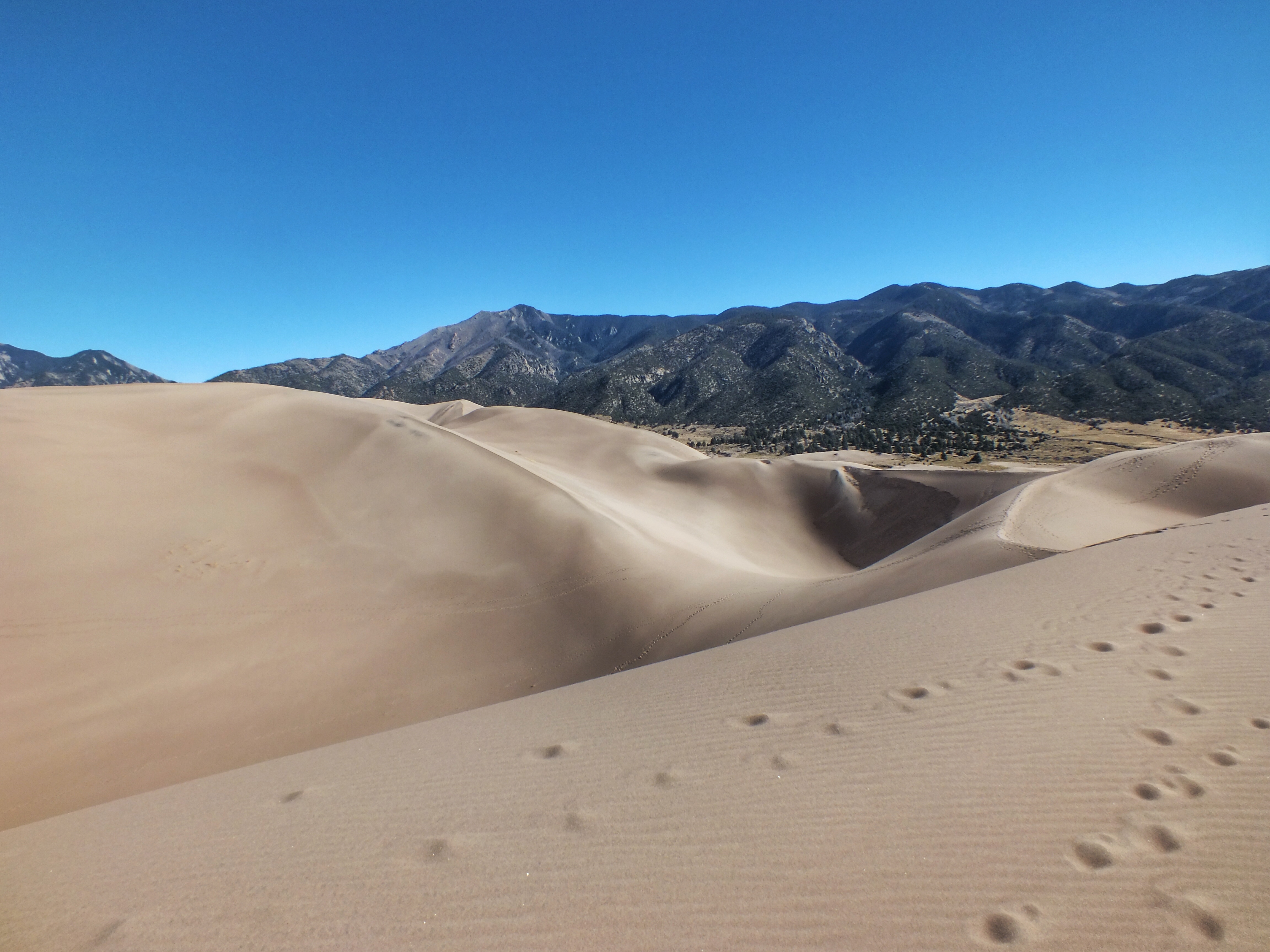 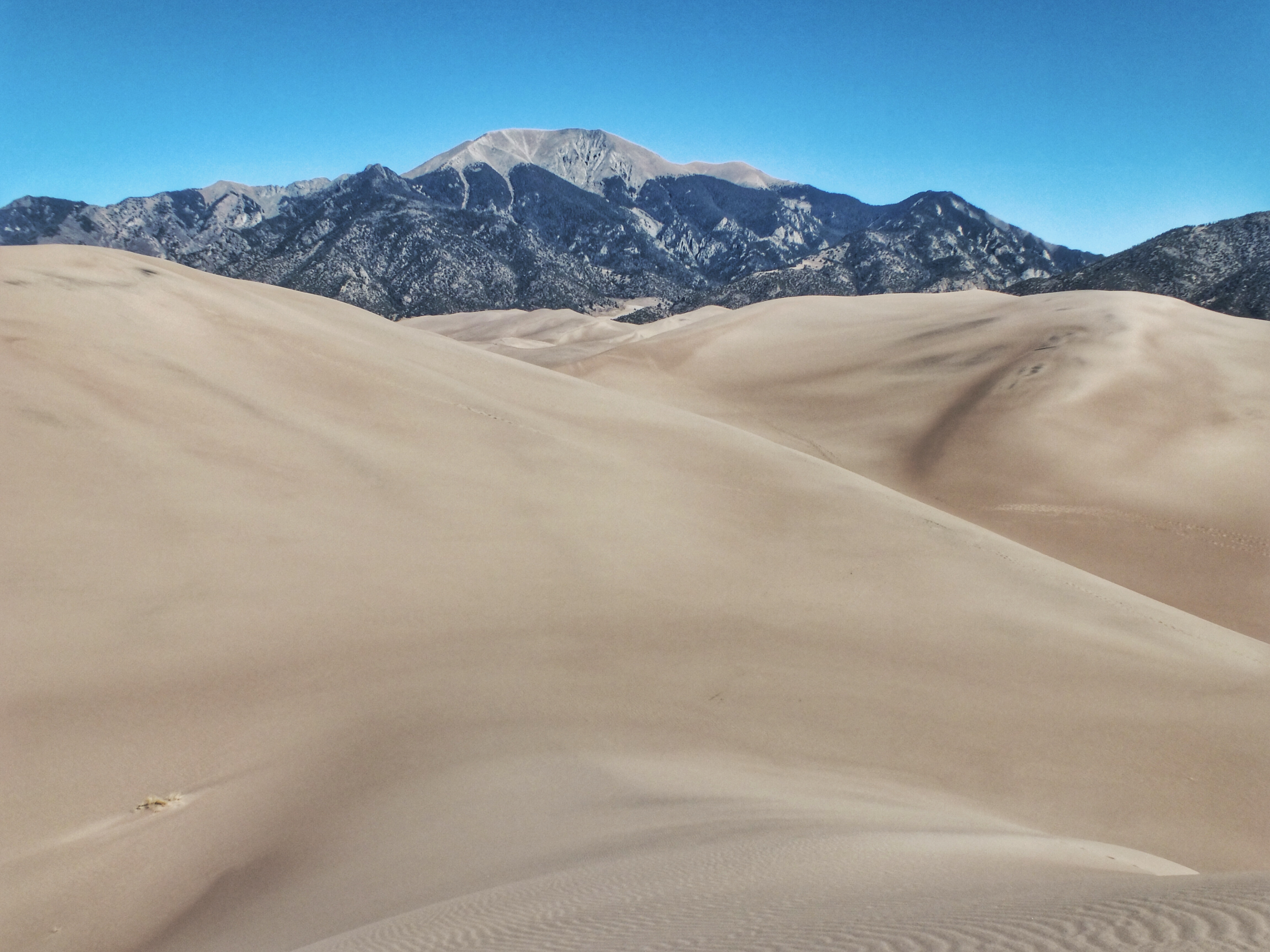 When I reached my goal, I was still about half a mile from the top of High Dune. Between me and the summit was a narrow ridge covered in footprints, but it was relatively flat, so walking wasn’t too difficult. And since I’d gone that far … 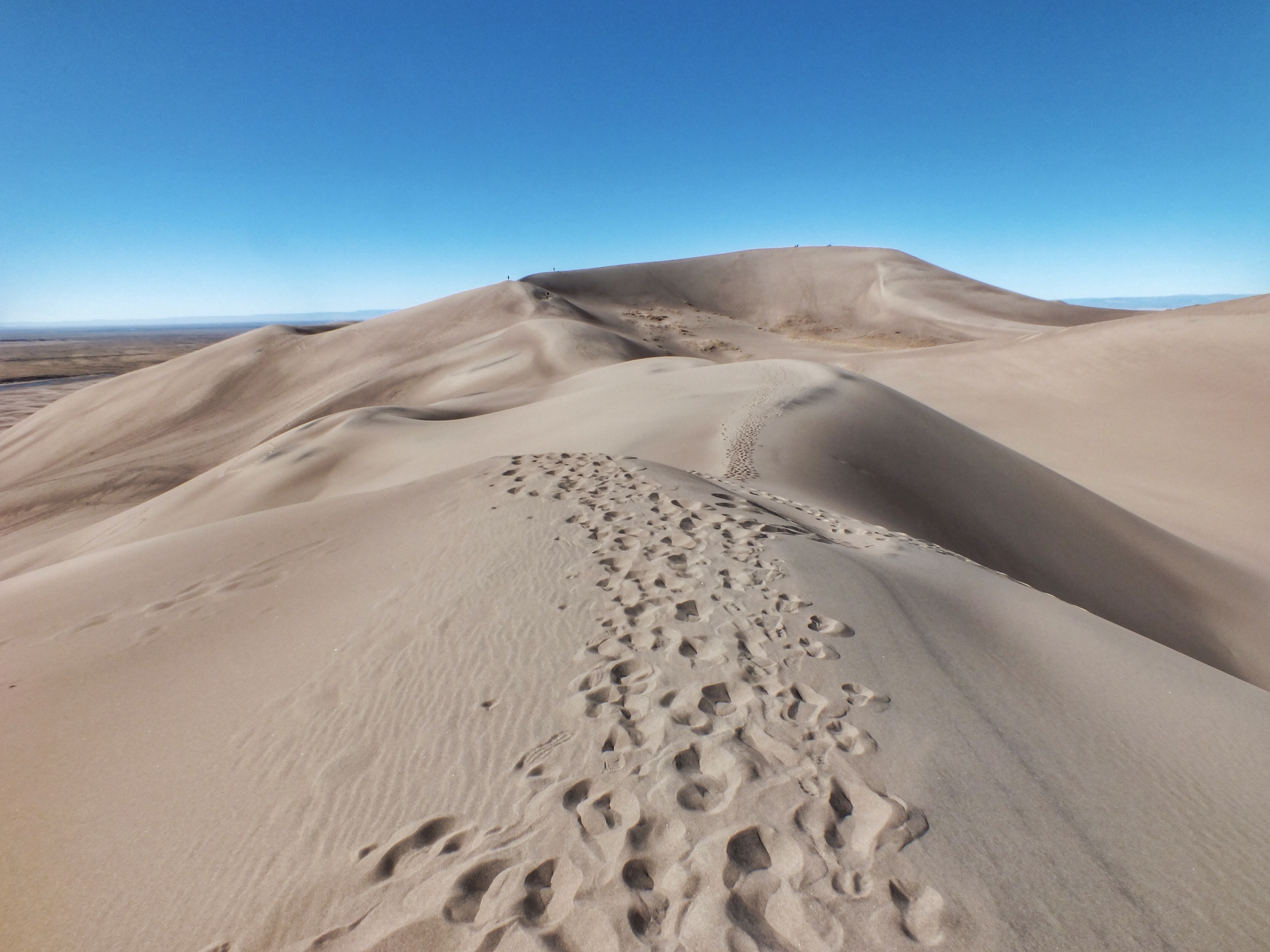 And finally, I was on top with a handful of people, all of whom were quite a bit younger than I. 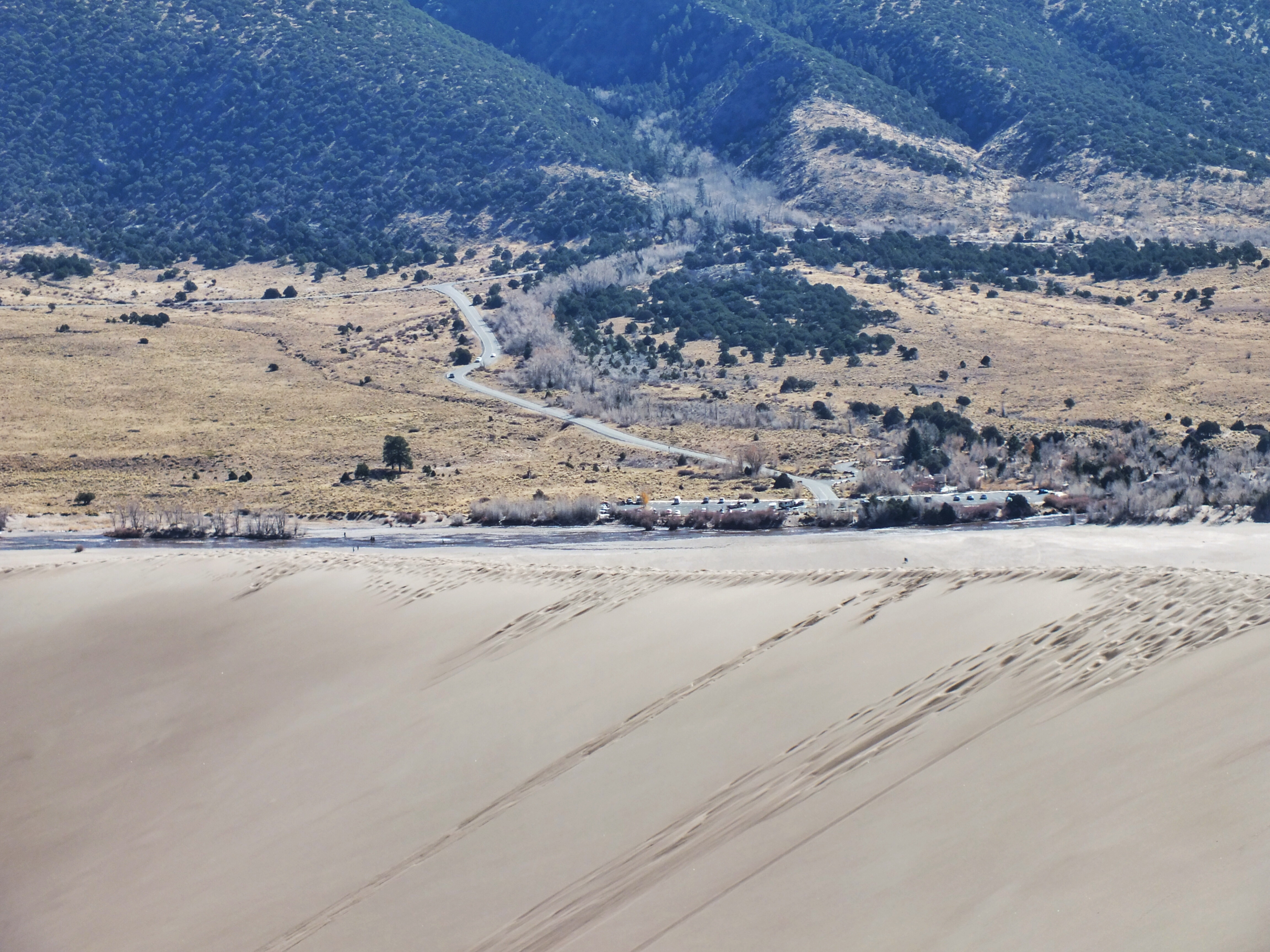 To the west, the dune field went on and on. 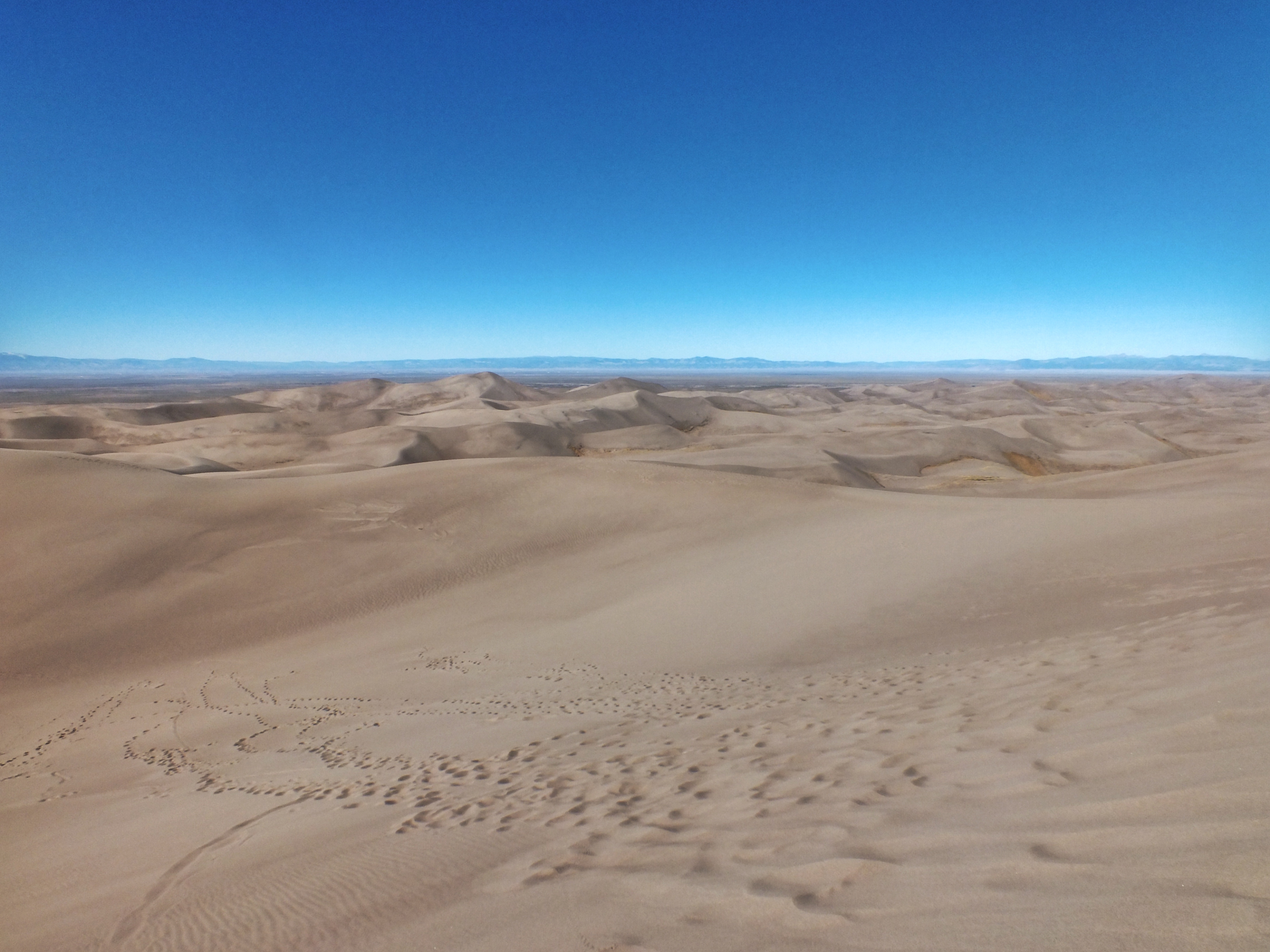 The tallest dunes are over there somewhere. That’s Mount Herard in the background. The summit is at 13,345 feet, about a mile higher than the dune crest. 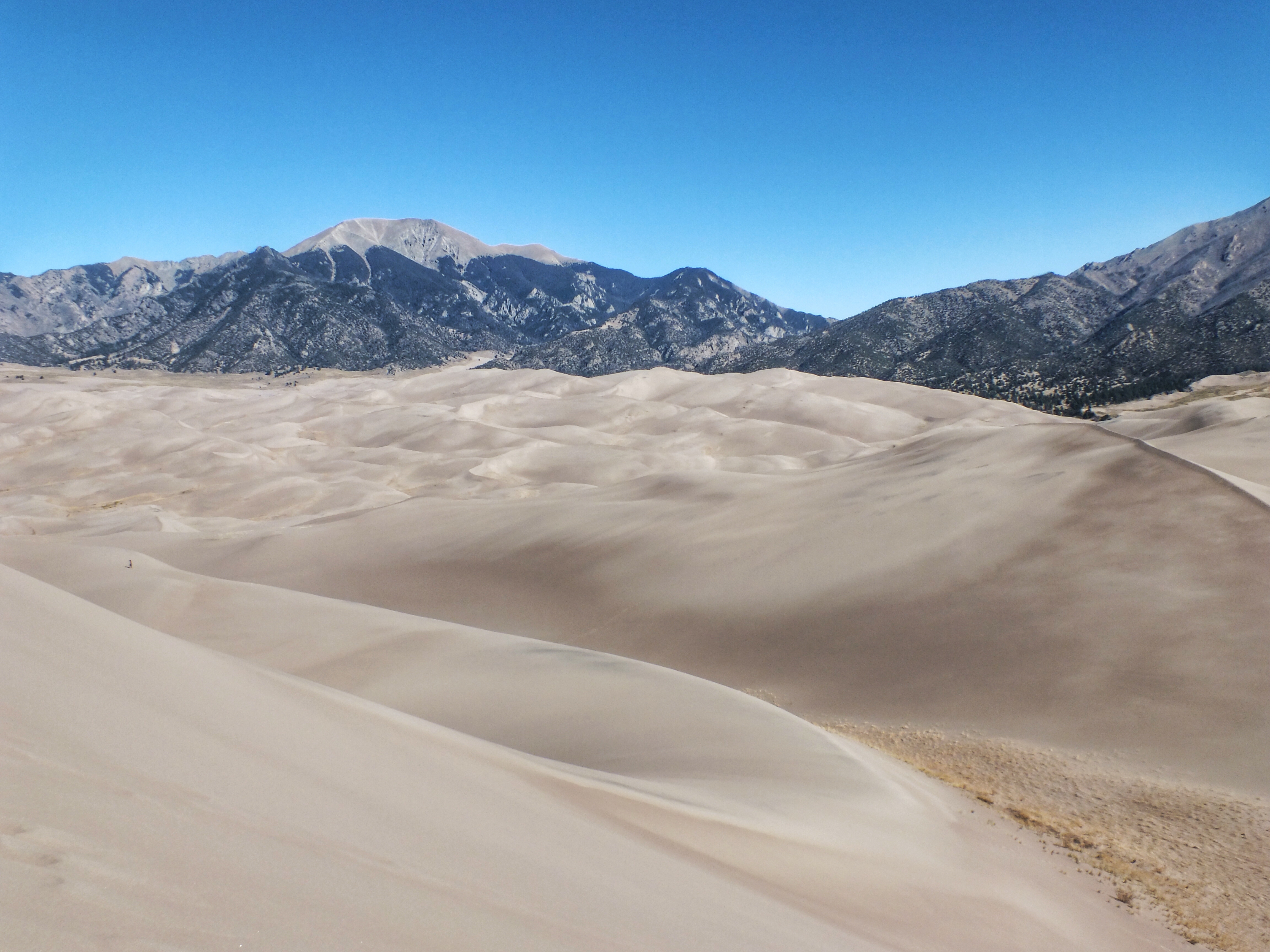 The mountain in the distance is Blanca Peak, at 14,351 feet above sea level. 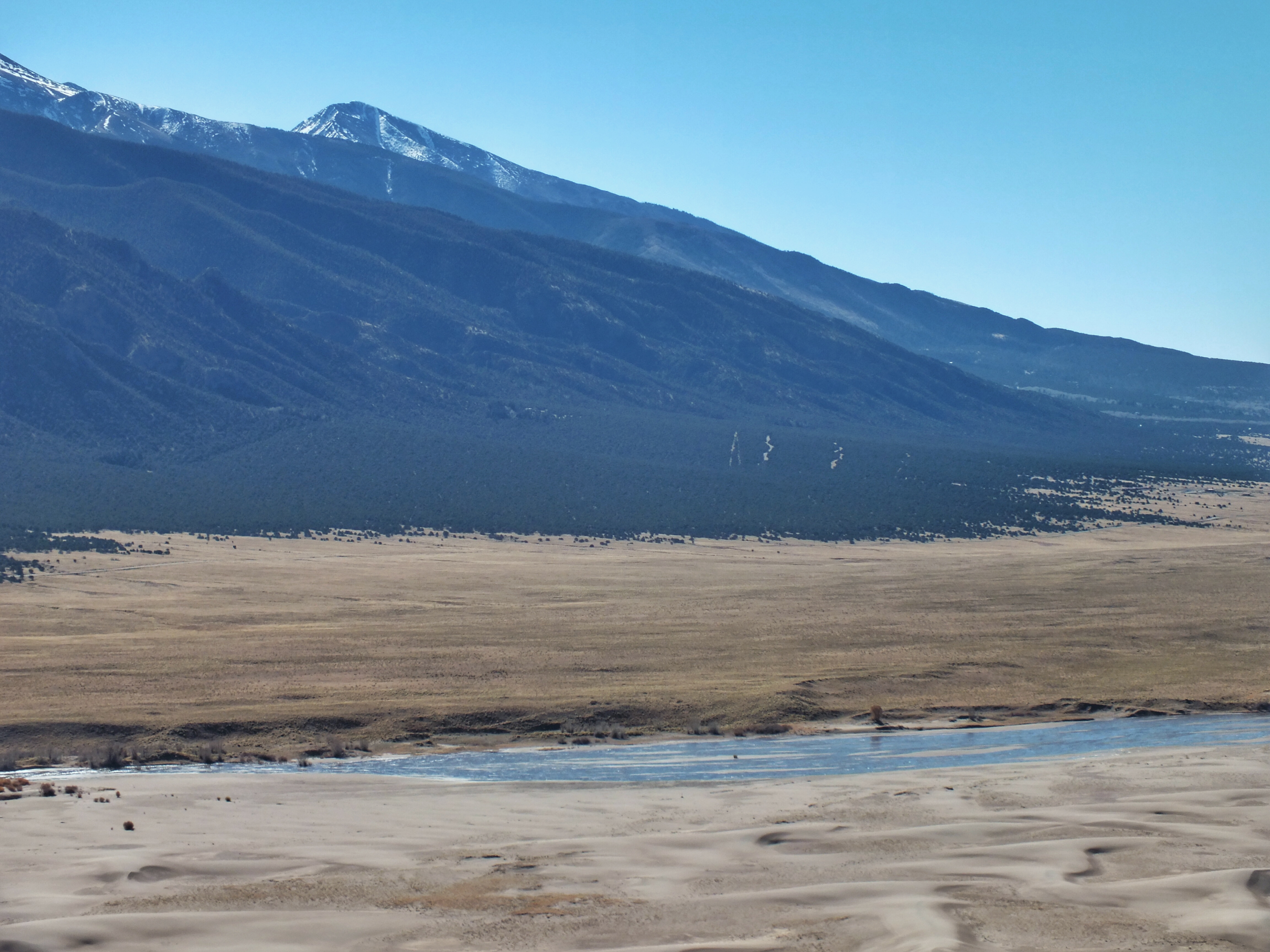 I only stayed on top for a couple minutes, then headed back down. My objective was to go fast and not wander into any bowls that I would have to climb back out of. Before long I came to a very steep slope. I hesitated, then started down. My feet sank a few inches into the sand, making it very easy to keep my balance on a surface I could never walk on otherwise.

A short time later, I came to another slope. This one was just as steep and a lot longer than the first. Instead of walking, I ran down it, taking long, leaping steps of ten feet or more. It kept going and going—I’m sure at least a third of the total descent. I know I’ve never covered so much ground so quickly under my own power. If I can consider gravity my own power.

When I got back to the car, my wife asked if I’d made it to the top. I said I had, and that I could prove it. I pulled out a water bottle filled part way with some sand I’d collected at the very top. She said that didn’t prove anything. Skeptic.  I took a quick red chair photo and a photo of where I’d just been. 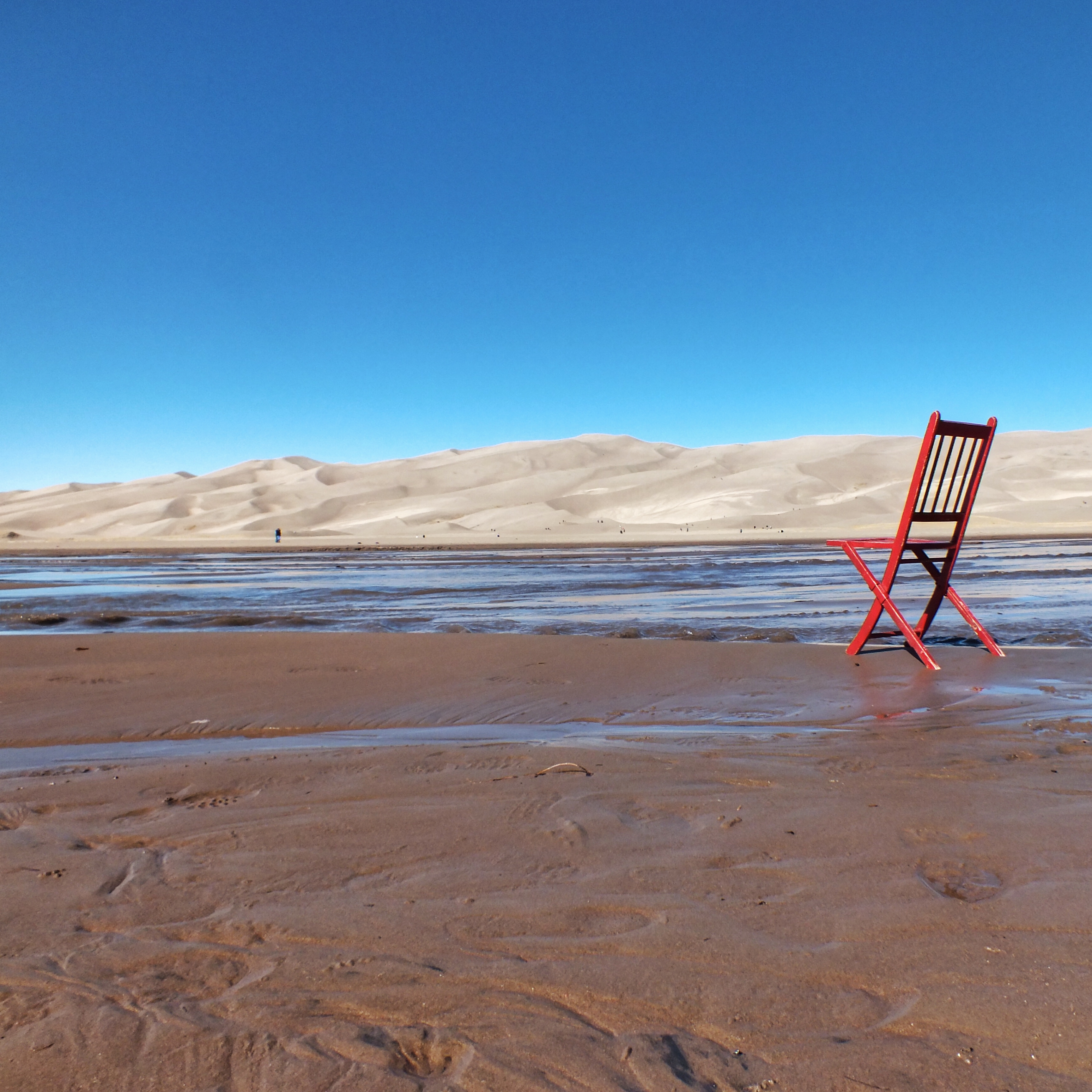 The dune in the middle of the photo, below the summit, is the one I walked down. The one I ran down is just out of the photo. 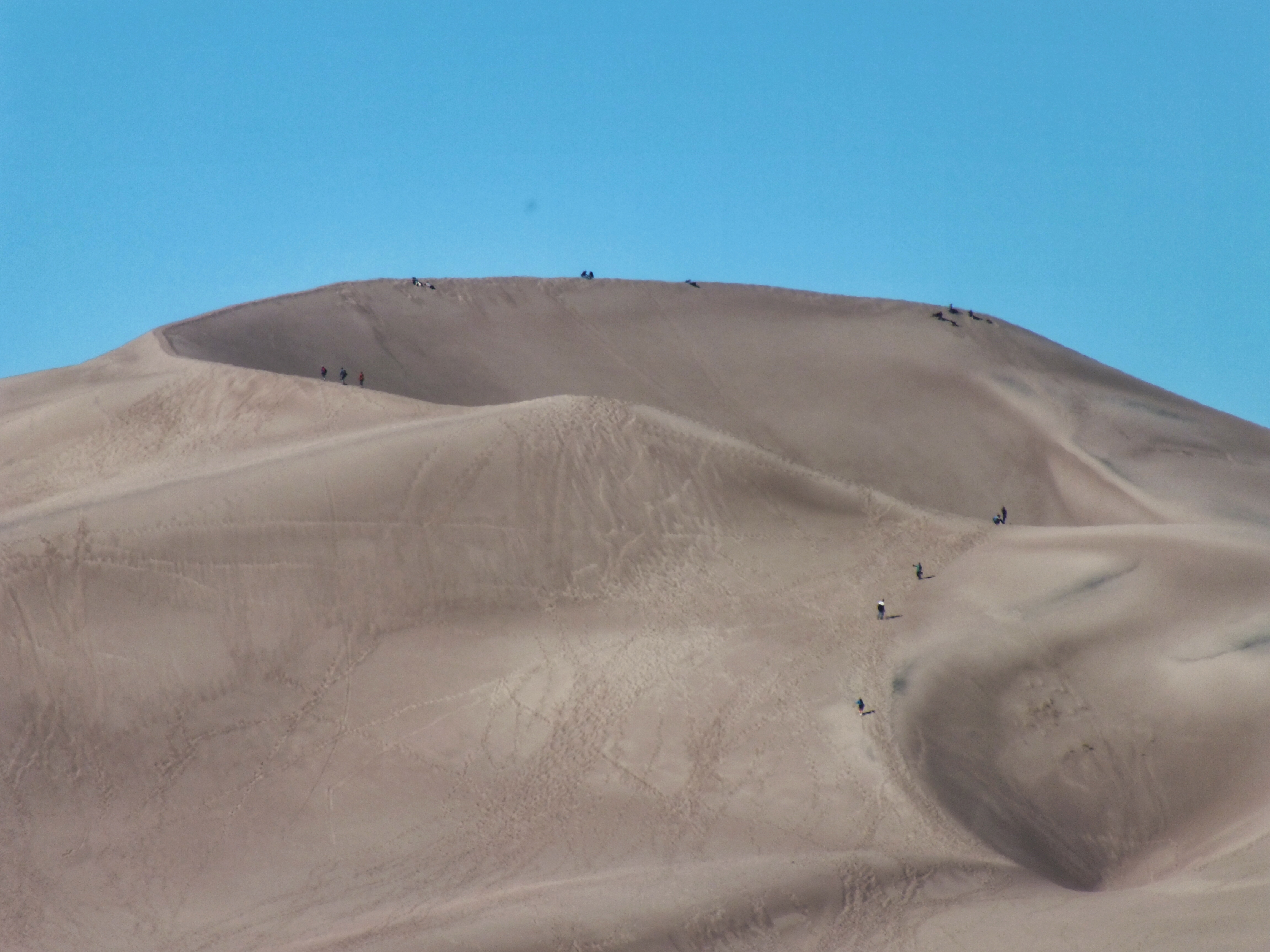 We drove a short distance to the trailhead of a two-mile hike in the woods at the base of the mountains. For much of the way, we could see the dunes across the valley. 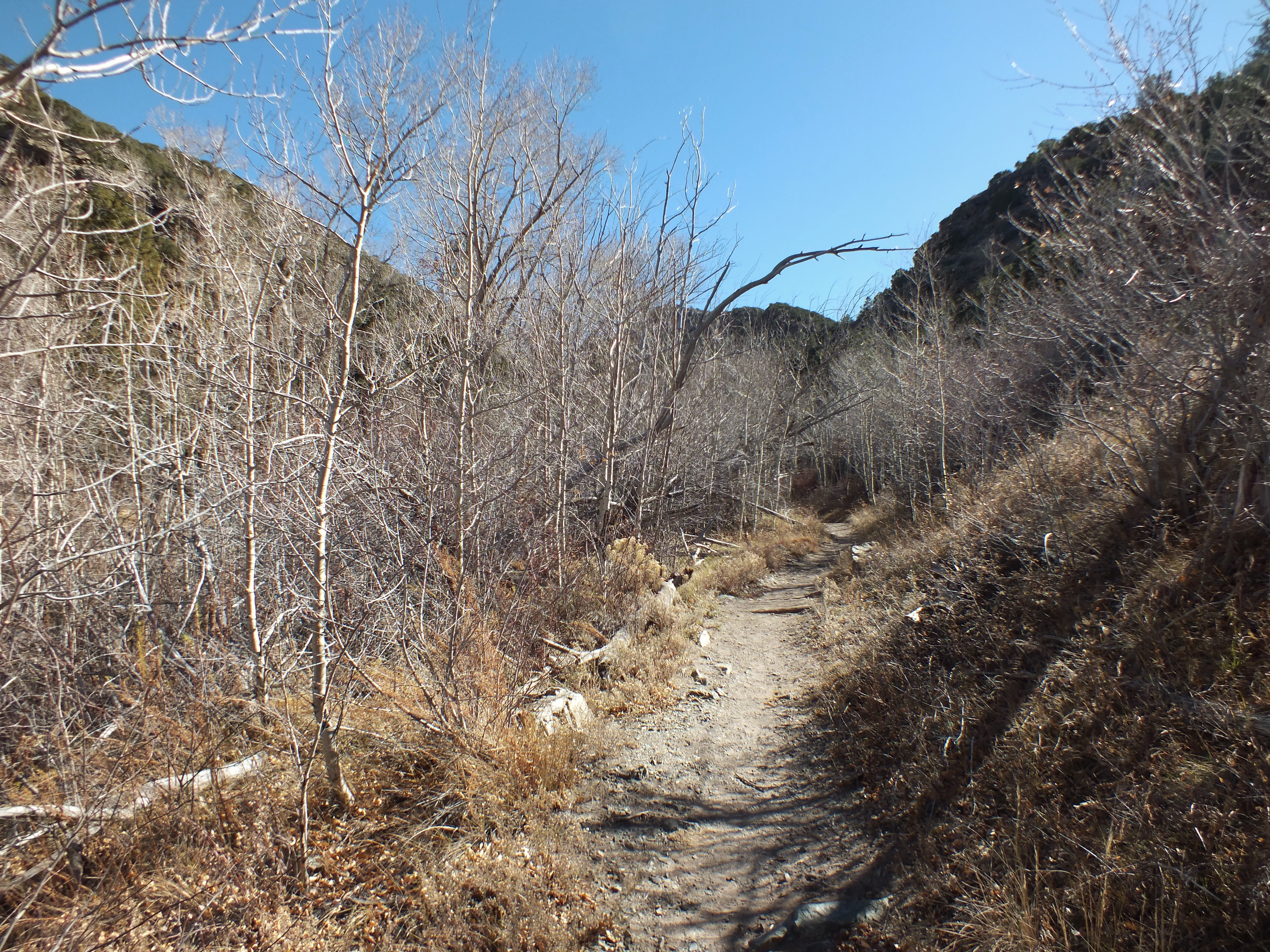 The visitor center is in the middle distance. The San Juan Mountains can be seen in the distance across the San Luis Valley. 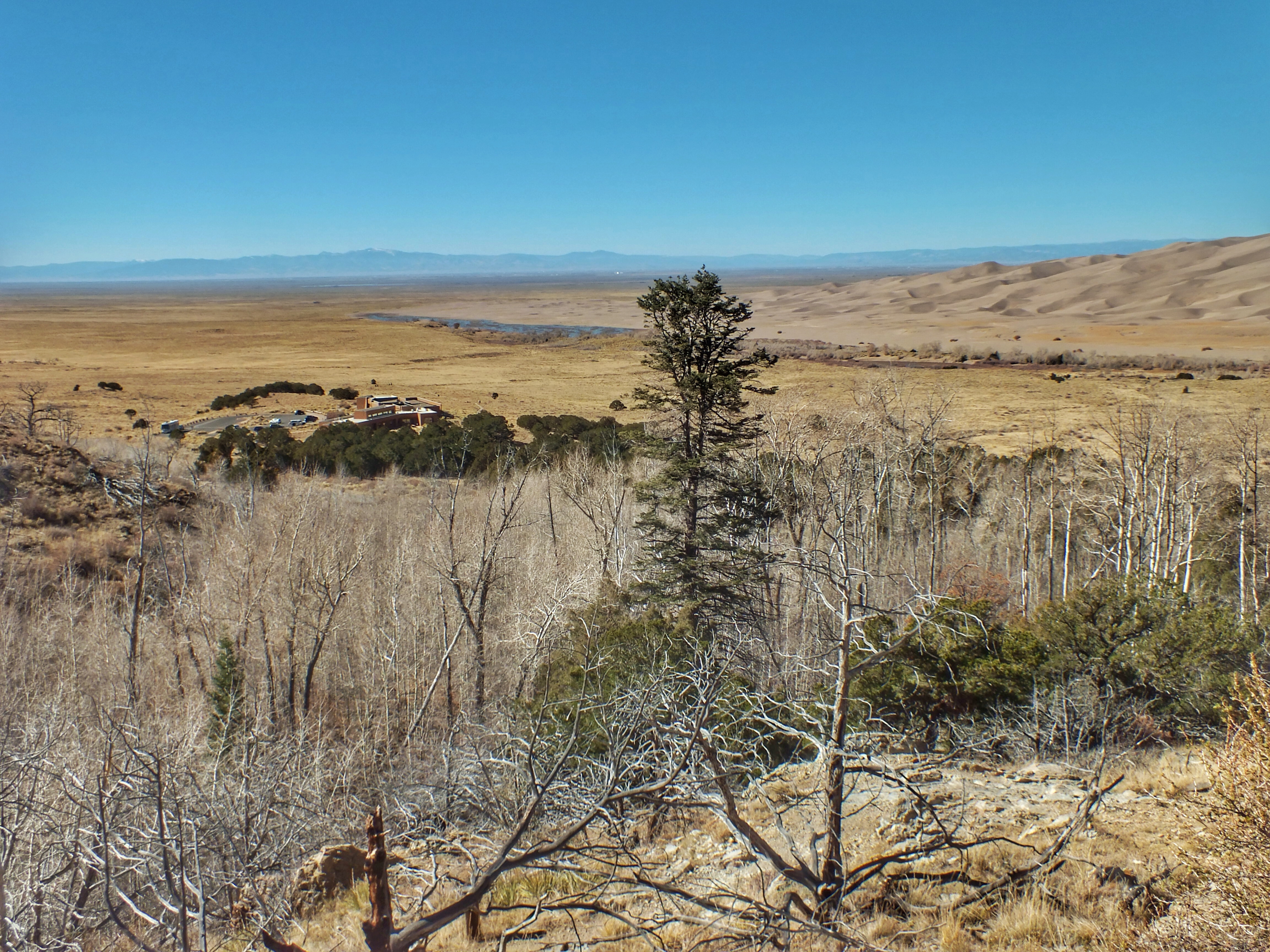 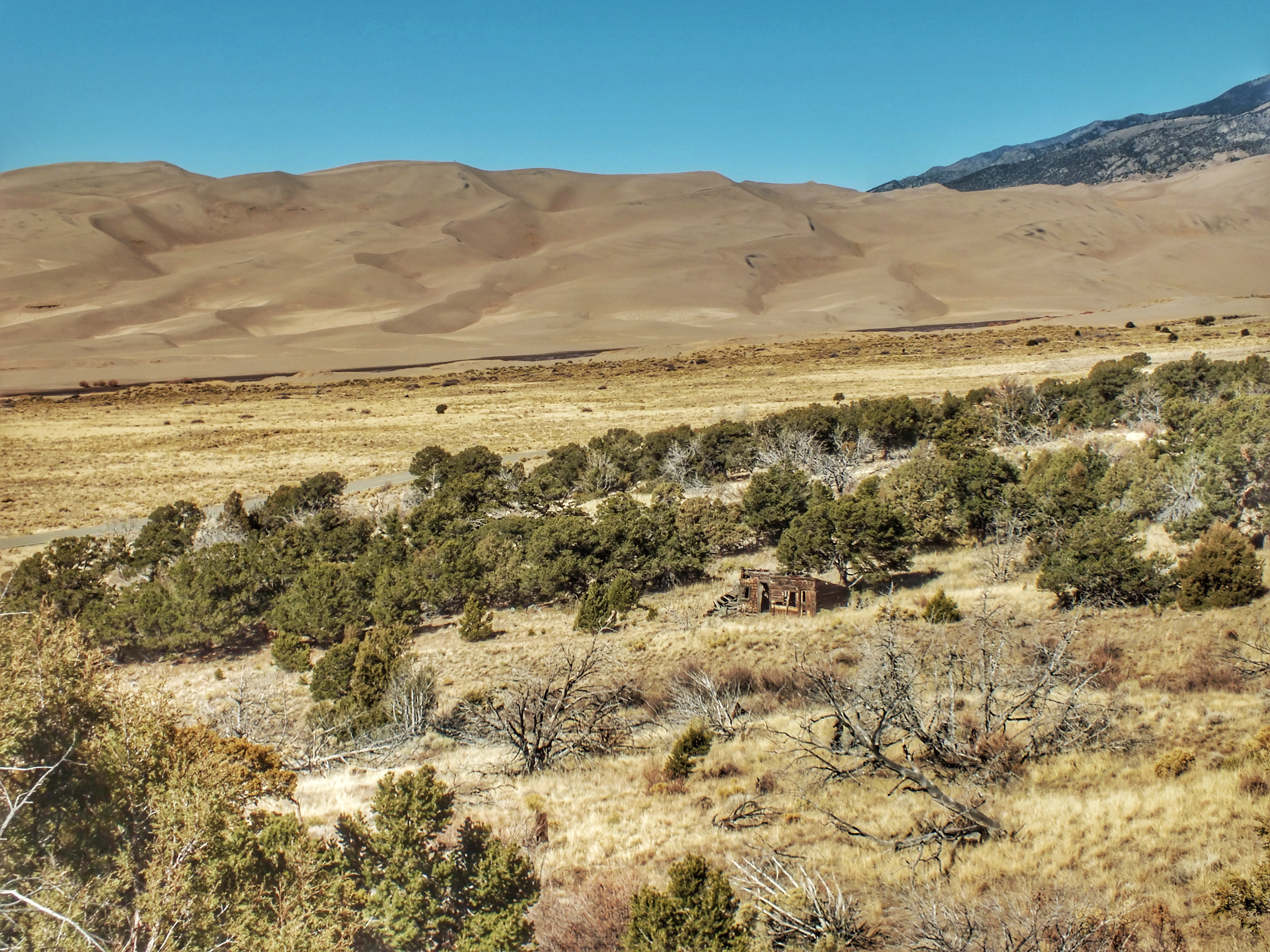 Along the trail, we happened upon a small, tame flock of Mule Deer. 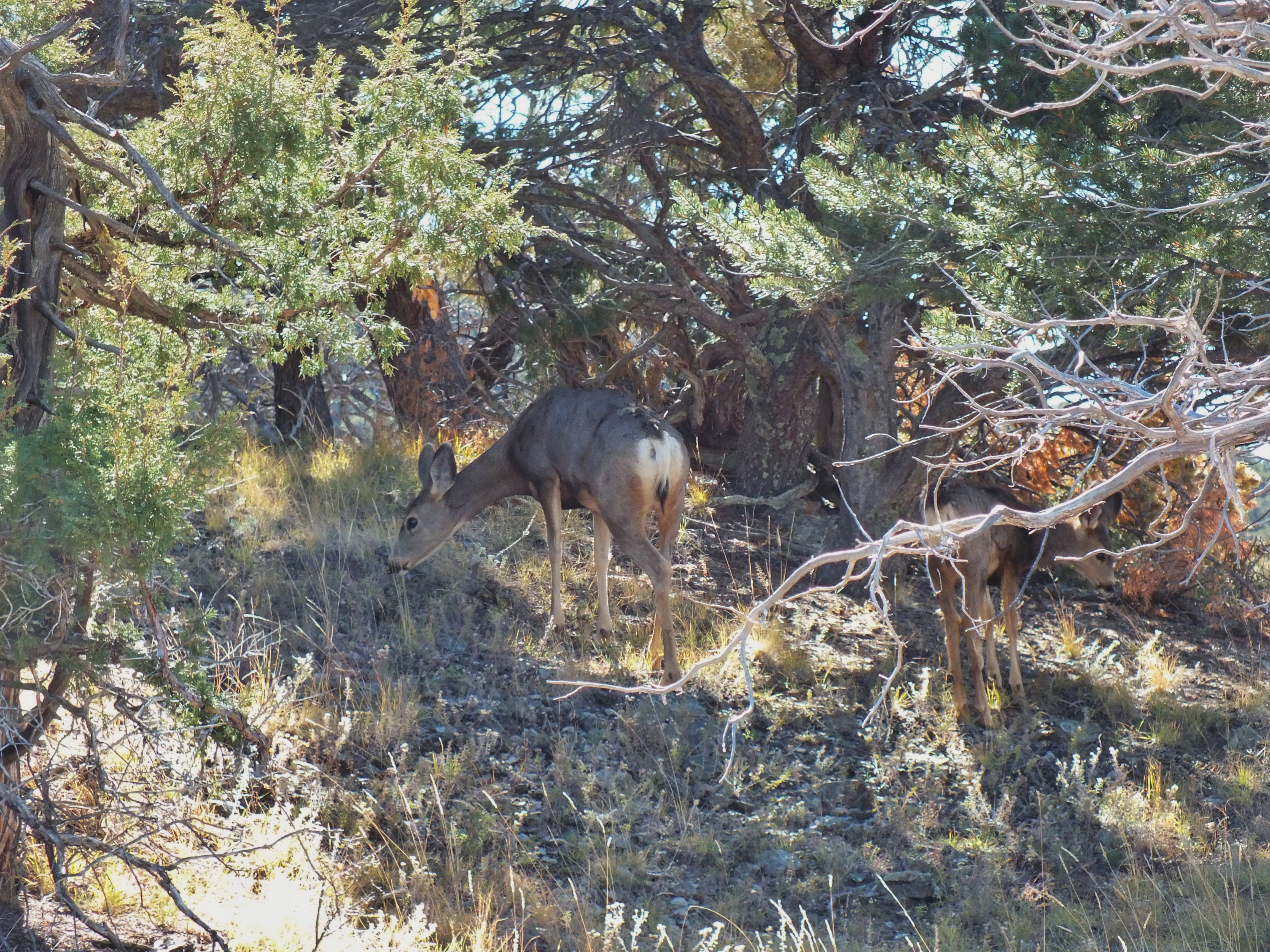 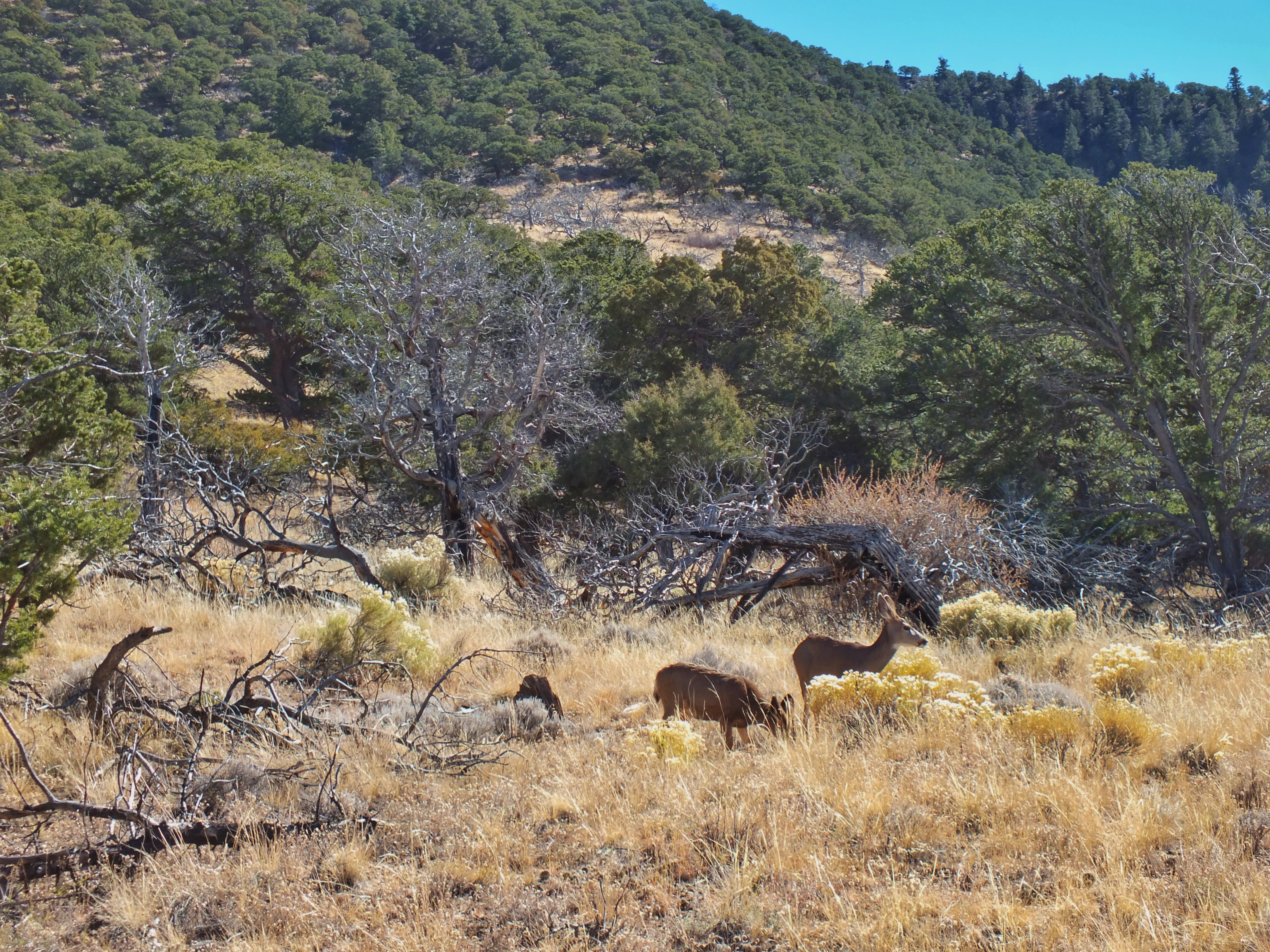 And that was that. We bought drinks at the visitor center, then headed west, then north up the San Luis Valley toward home. 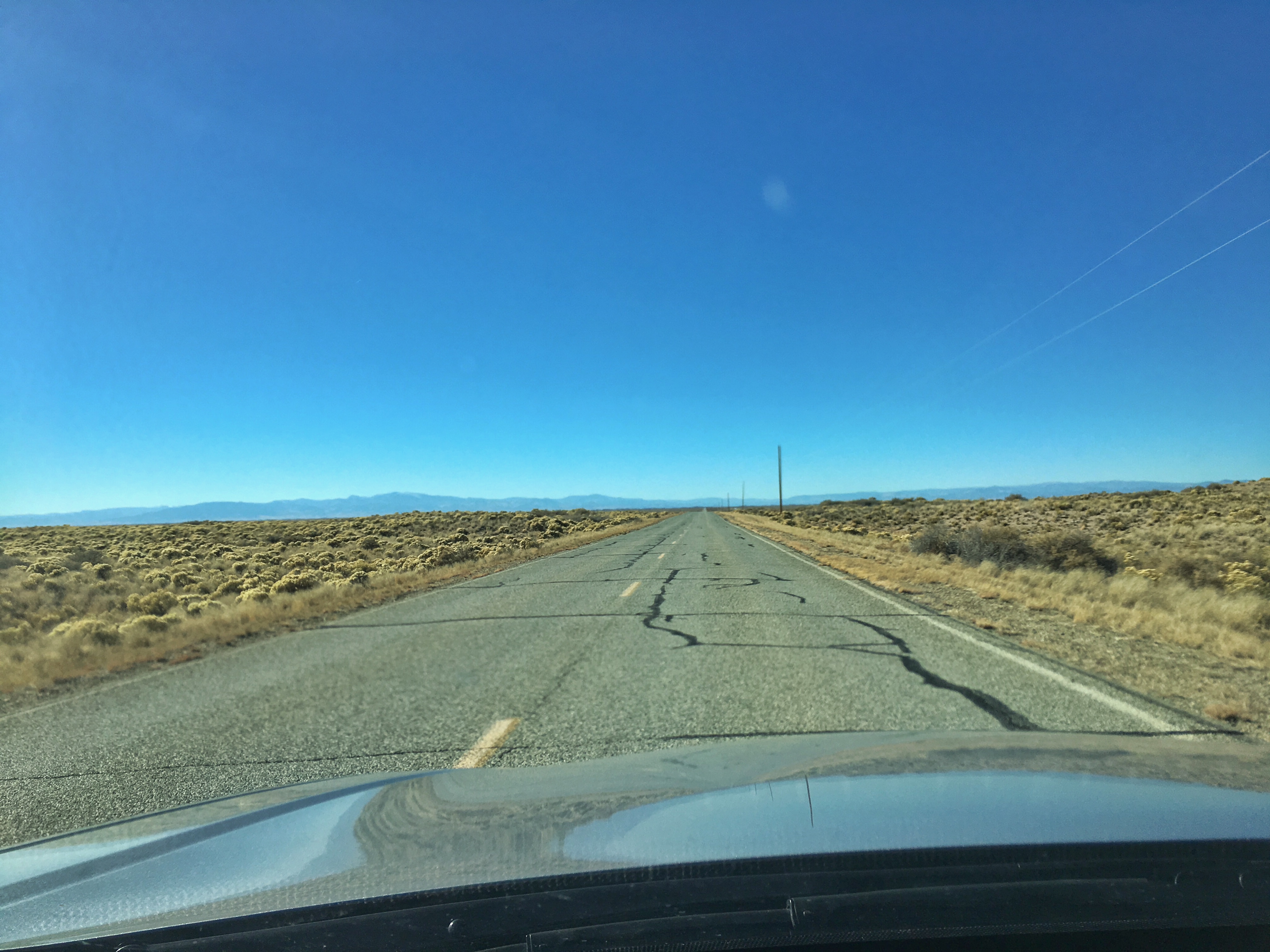