The visitor center for Harding’s home is a small cottage in the backyard. Harding had it assembled from a kit for the use of reporters who were covering his Presidential campaign in 1920. 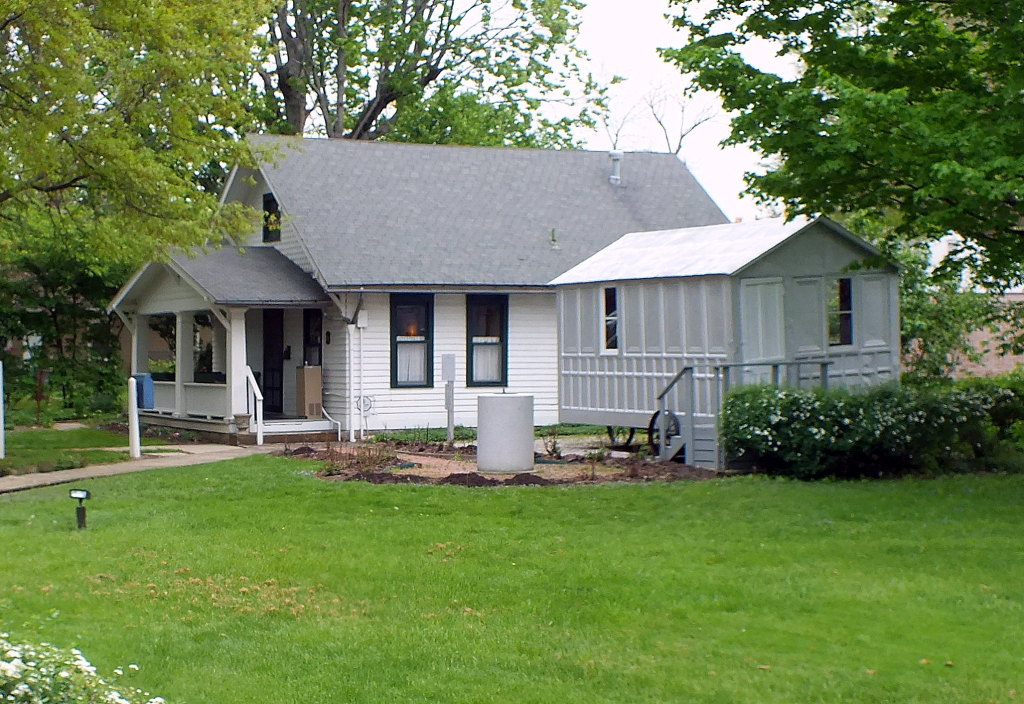 Harding had the home itself built in 1890 as a wedding present to Florence, a divorcee five years his senior. 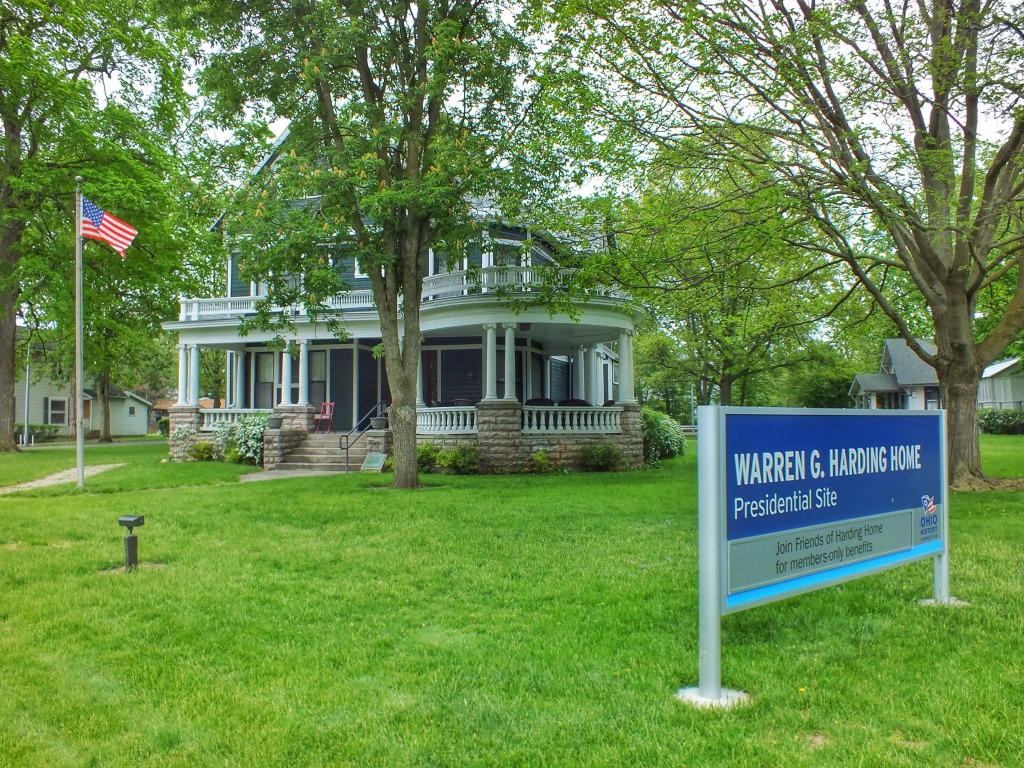 The couple lived there until they left for the White House. They never had children — Florence had a son by her first marriage. The boy was raised by Florence’s father, who was a wealthy tyrant who disowned his daughter twice — after each of her marriages.

We watched a video in the visitor center and looked at the few displays. A woman then sent us up to the house and asked us to wait for her on the front porch. This is the famous front porch from which Harding conducted his “front porch campaign” the last such in history. Crowds of people would come to stand in his yard and in the street to hear him give speeches. 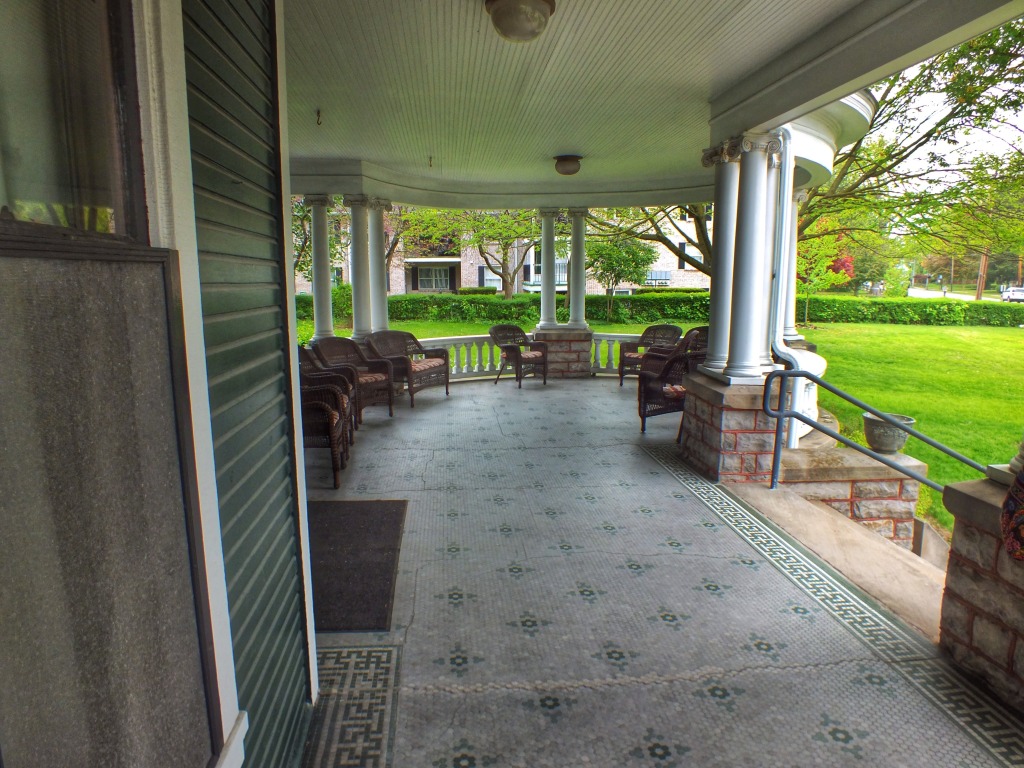 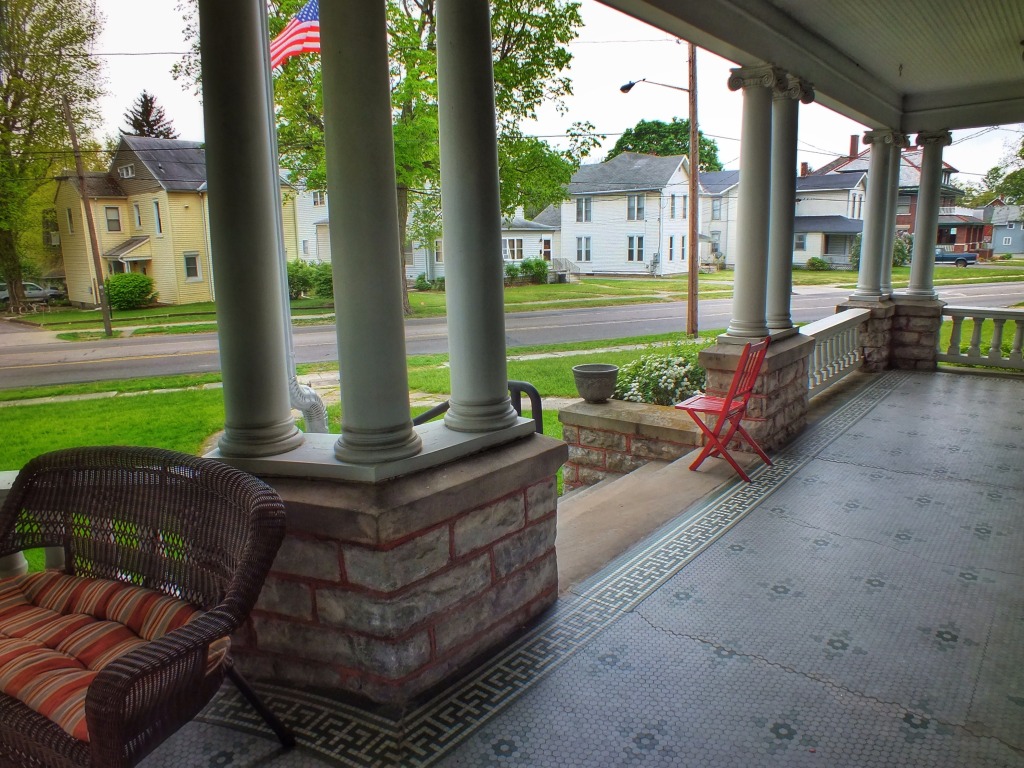 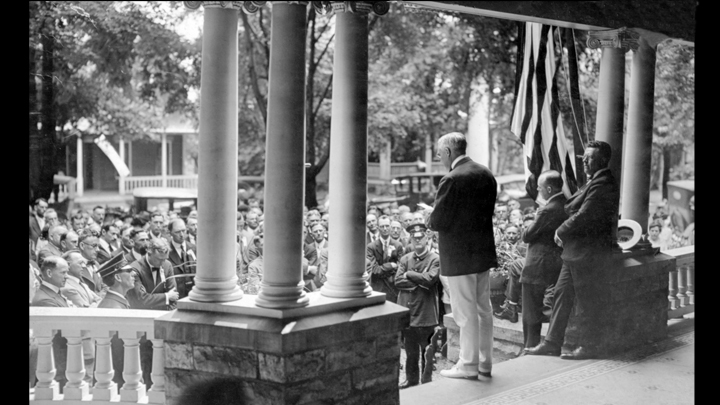 Notice how the houses across the street are at an angle. The street itself doesn’t run true north to south or east to west, but the houses were still aligned that way. We’ve also noticed this on some streets in Columbus. I’m not sure why they were built this way. 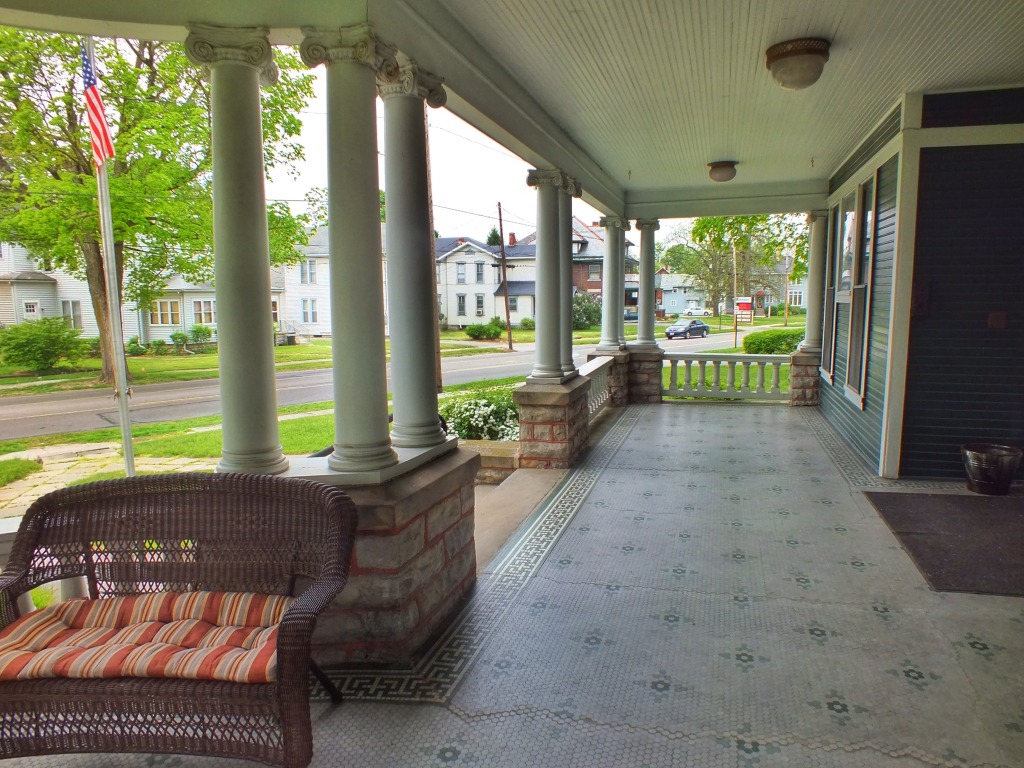 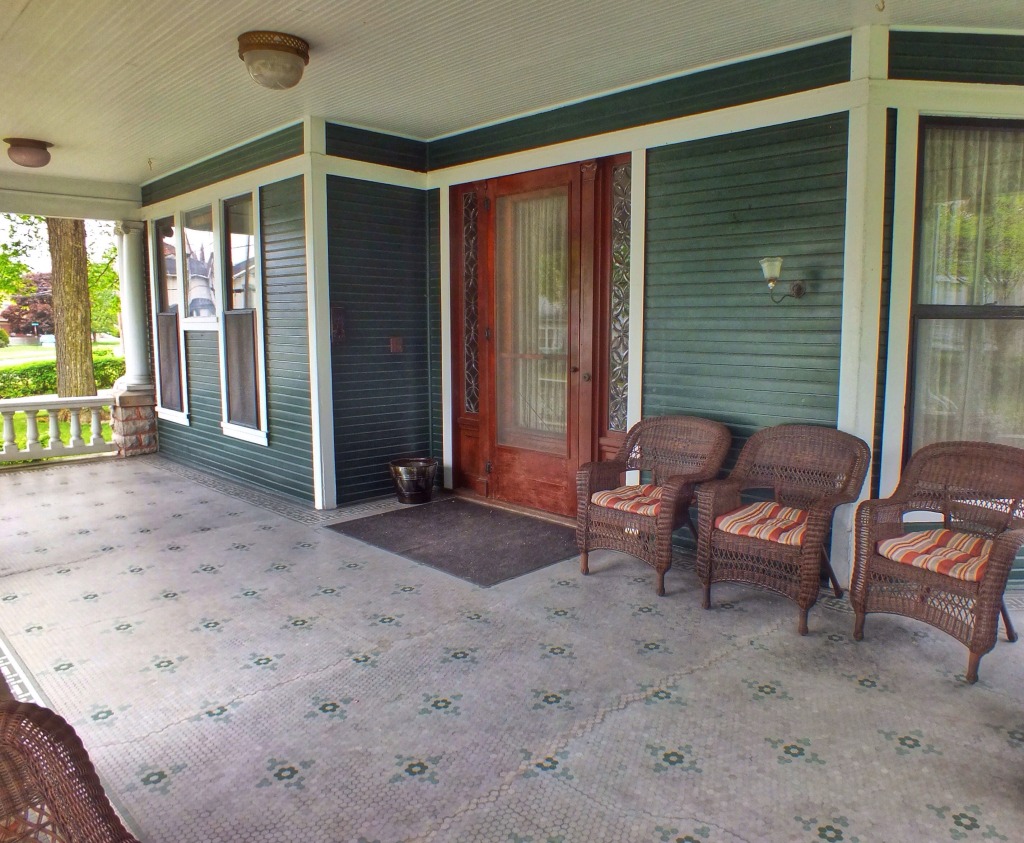 Shortly after our tour guide arrived, a family of five showed up. They knew the tour guide — she greeted them with hugs. At first, she seemed rather acerbic, but we warmed up to her as the tour went along. She knew her stuff, took her time and answered all our questions.

I wasn’t allowed to take photos in the house. But after our tour, I held my camera up to the cut glass panels alongside the front door and got these two photos of the entrance hall. Warren and Florence were married in this room, at the base of the steps visible on the right in the first photo. 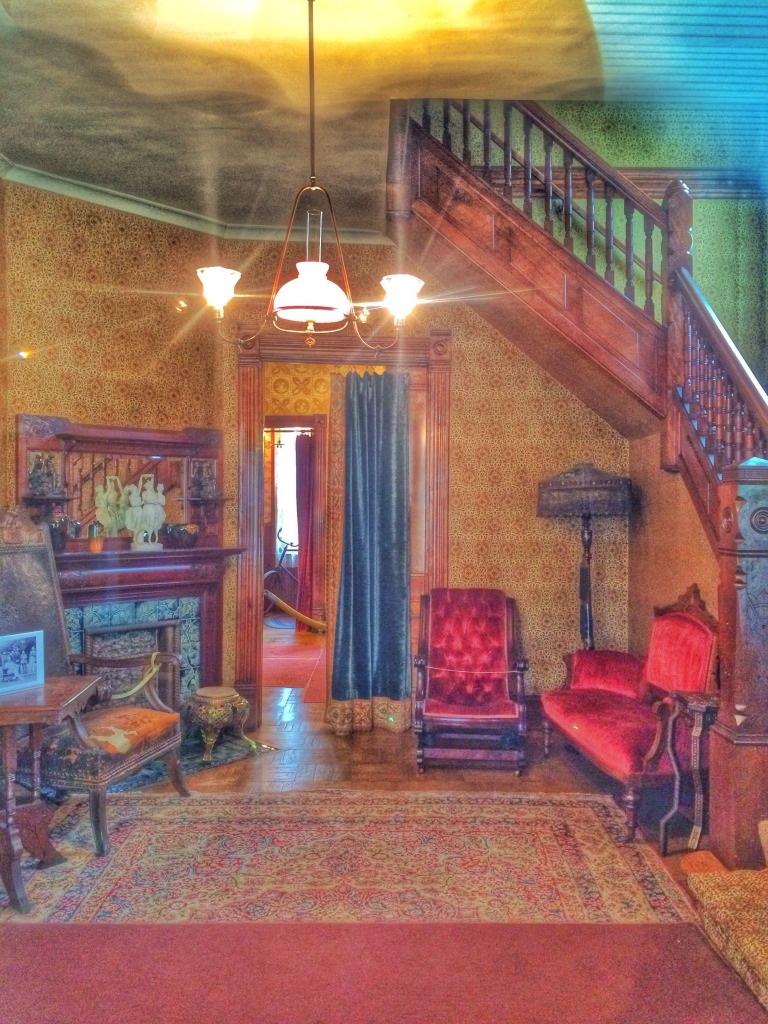 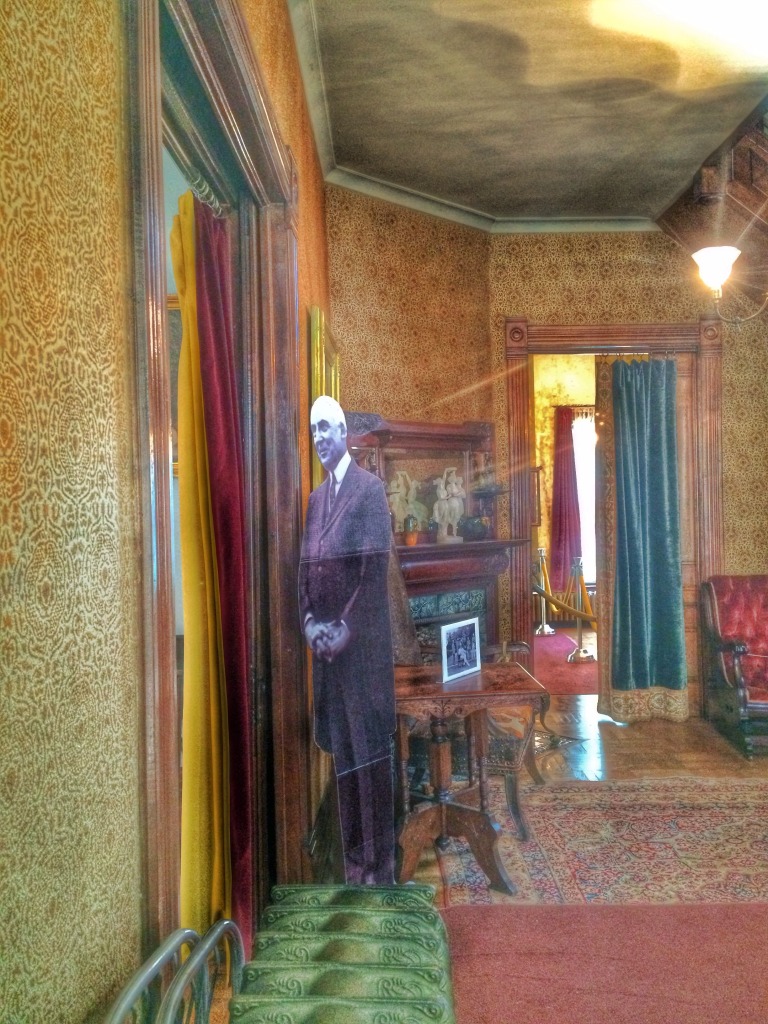 I also bought two postcards in the gift shop. This is the master bedroom. Harding wore the tuxedo on his inauguration on March 4, 1921. 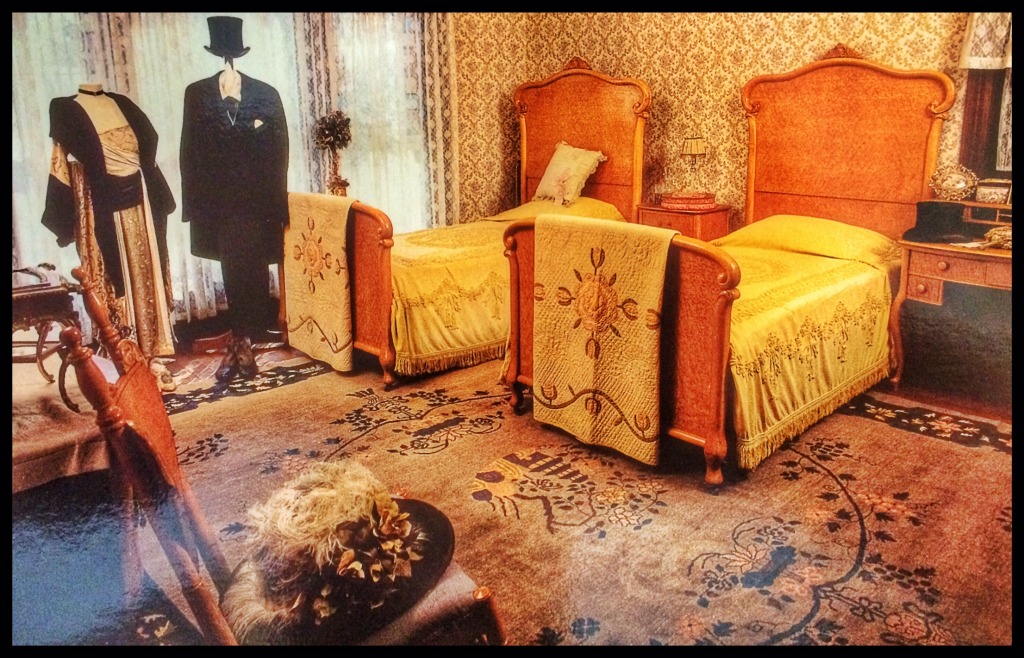 The library, where Harding wrote his speeches. 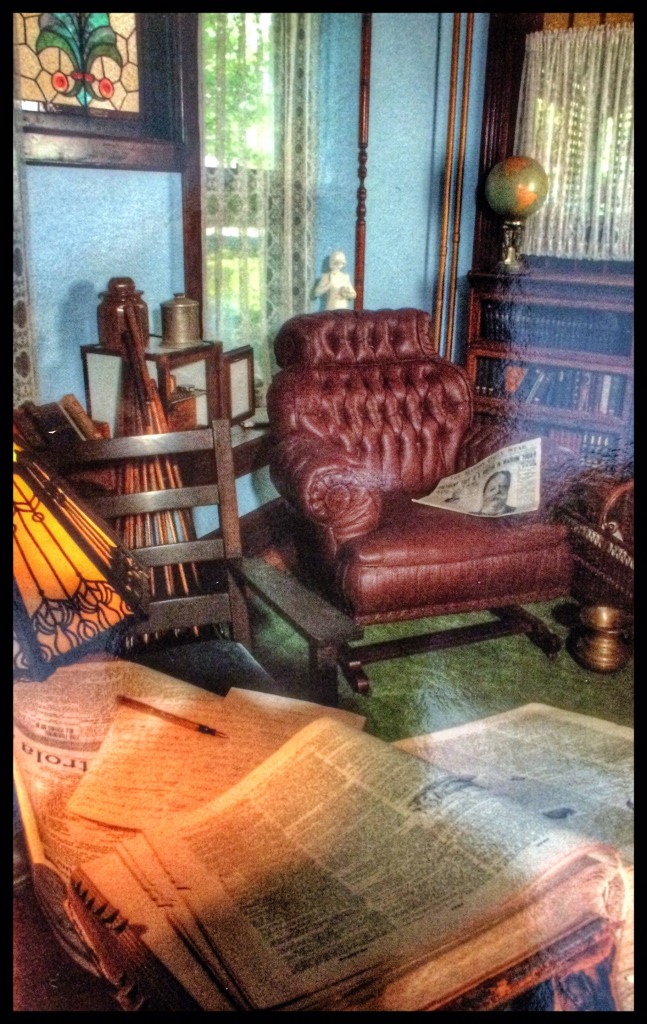 Over 90 percent of the furnishings are original to the Hardings — the house was made into a museum just a couple years after Harding died. It isn’t a large house. The main floor has five rooms, the parlor, the library, the dining room, the entrance hall (above) and a kitchen. At the time of our visit, the kitchen was torn apart in the process of reconstructing it to look as it did when the Hardings lived there.

The second floor has three family bedrooms, a maid’s room and a bathroom.

After our tour, I walked around outside and took these photos. 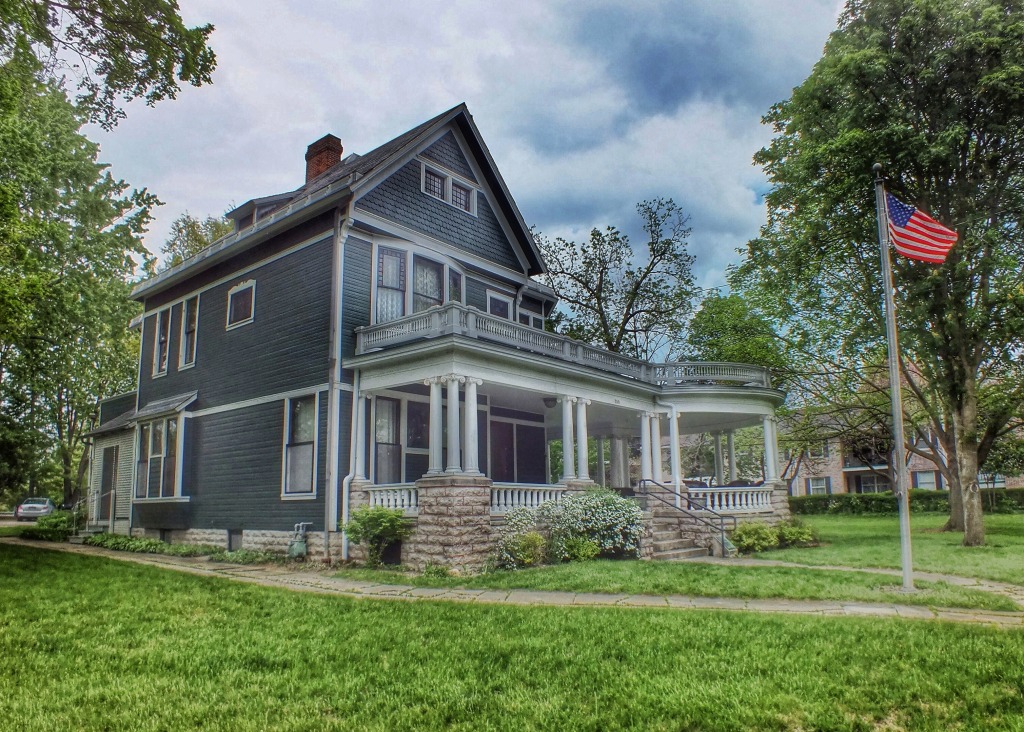 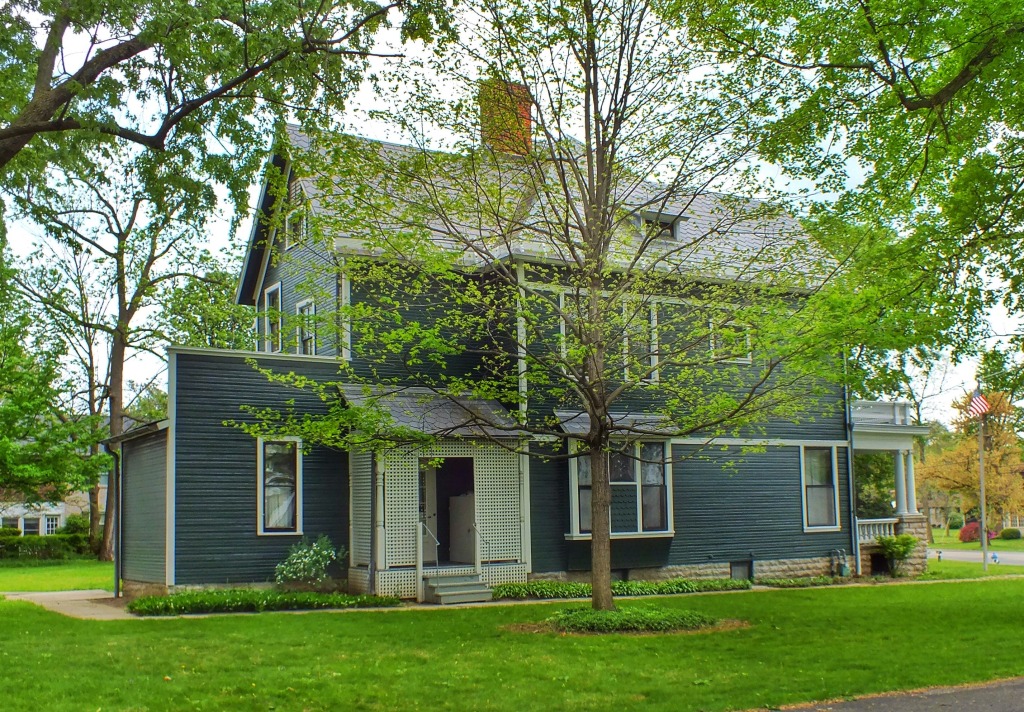 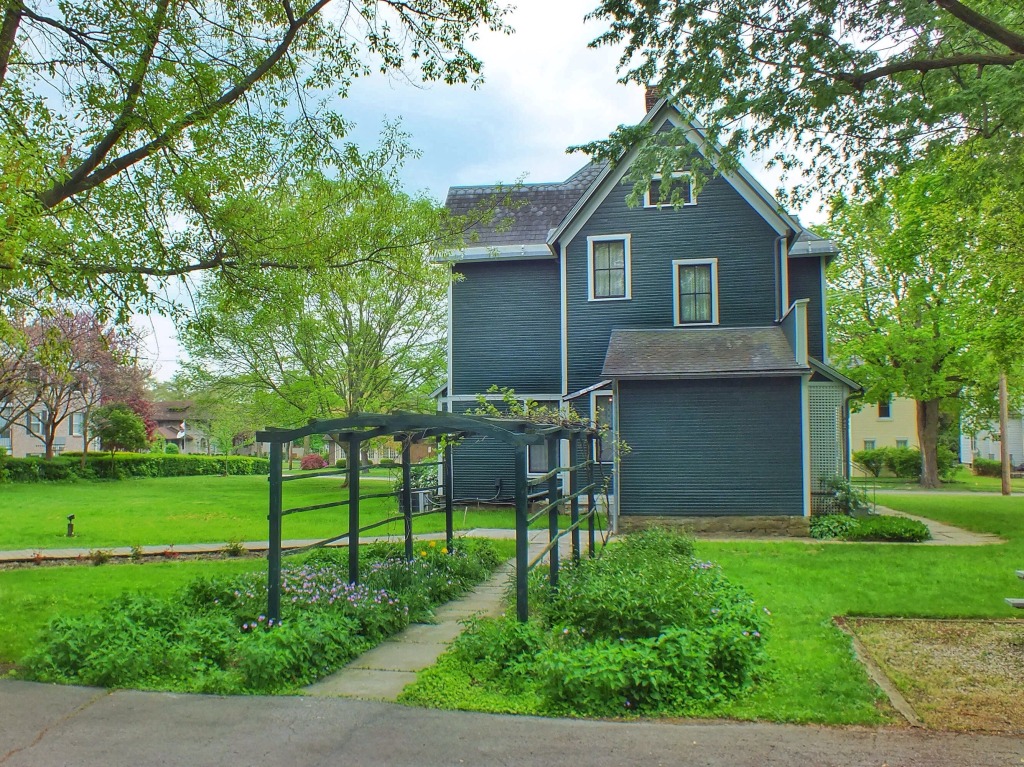 Our tour guide is in the green shirt. 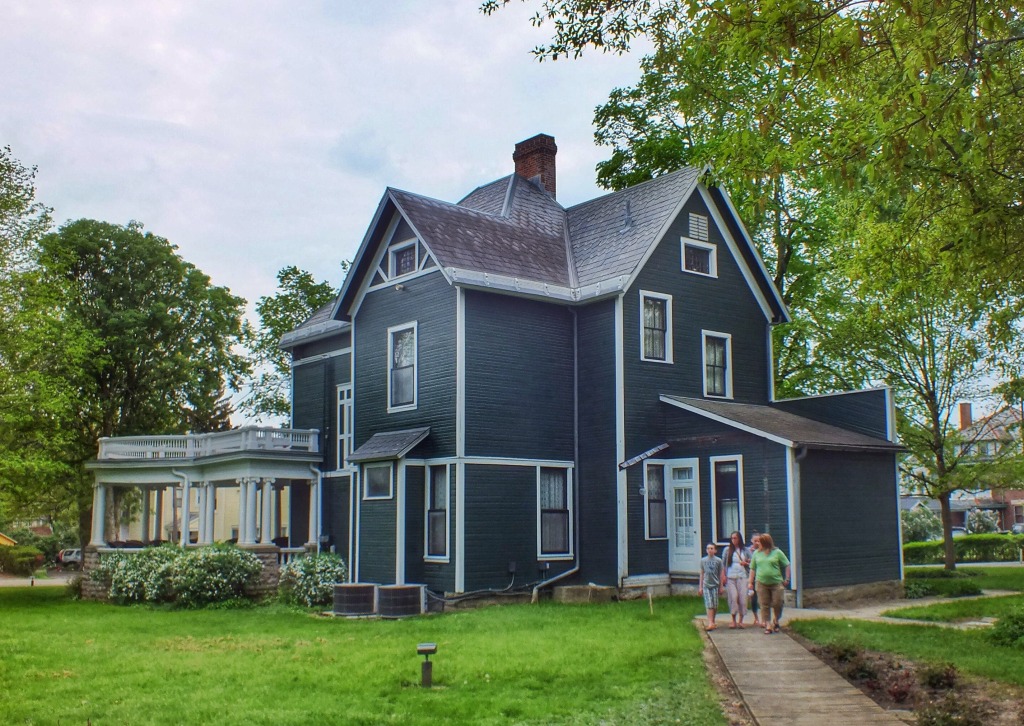 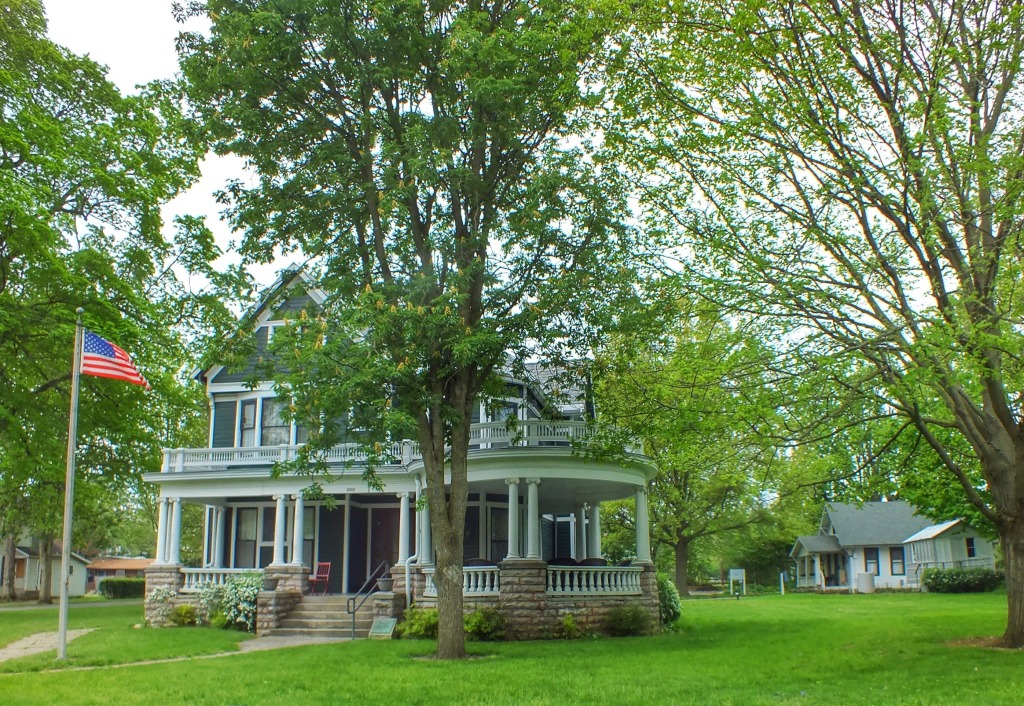 Next to the visitor center was a mobile voting booth, used in Columbus from 1880 to 1940. 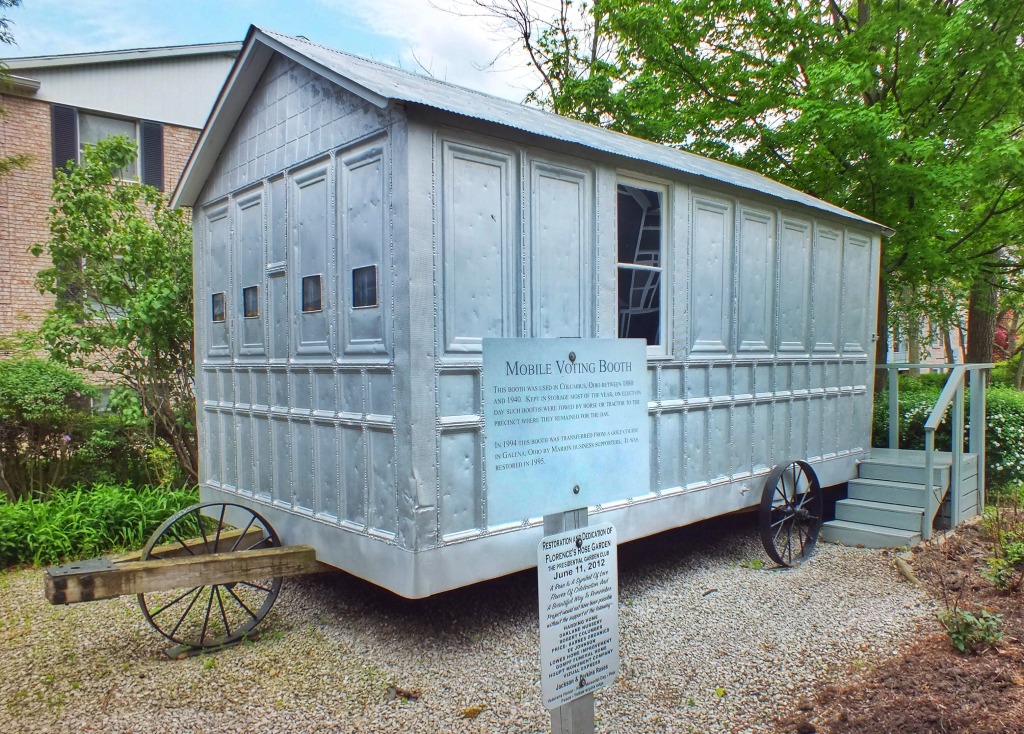 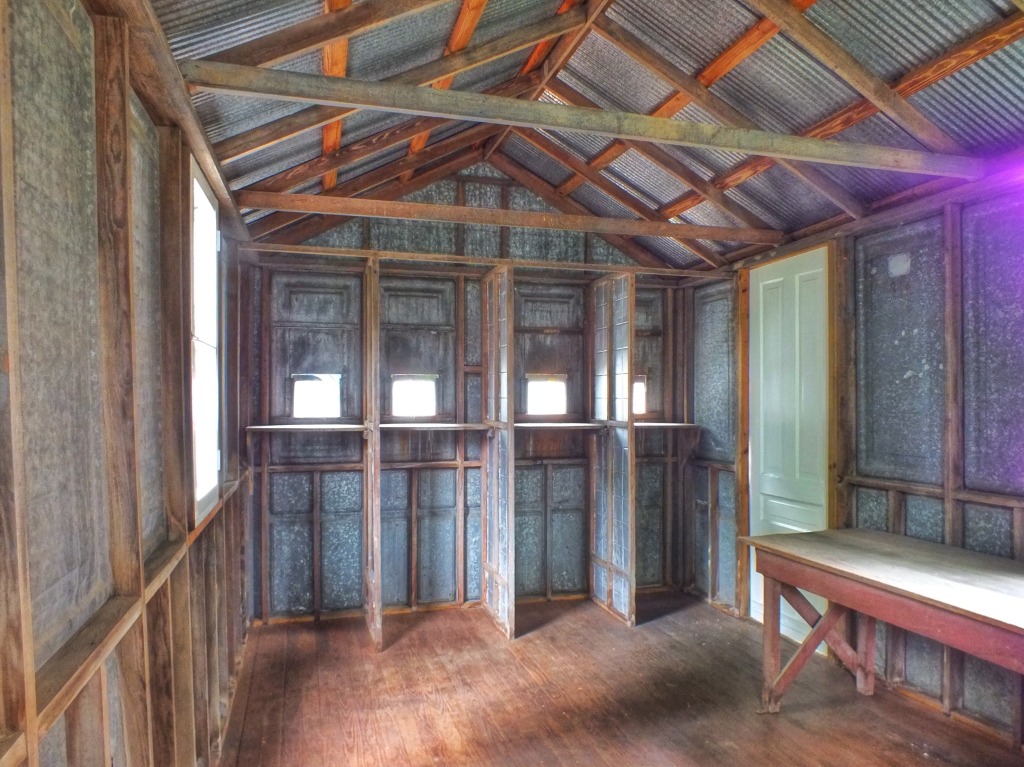 After Harding died, Florence moved back to Marion and took up residence at the White Oaks Sanitarium, operated by Charles E. Sawyer, the incompetent local physician who served as Harding’s doctor in Washington and whom, according to many, completely misdiagnosed and mistreated the President and so was, in part, responsible for his early death. Florence died at the Sanitarium in November, 1924, just 16 months after Harding. A few of the sanitarium buildings, although not the one that Florence occupied, are still in existence, squatting in the middle of a poorly-maintained park on the outskirts of Marion. 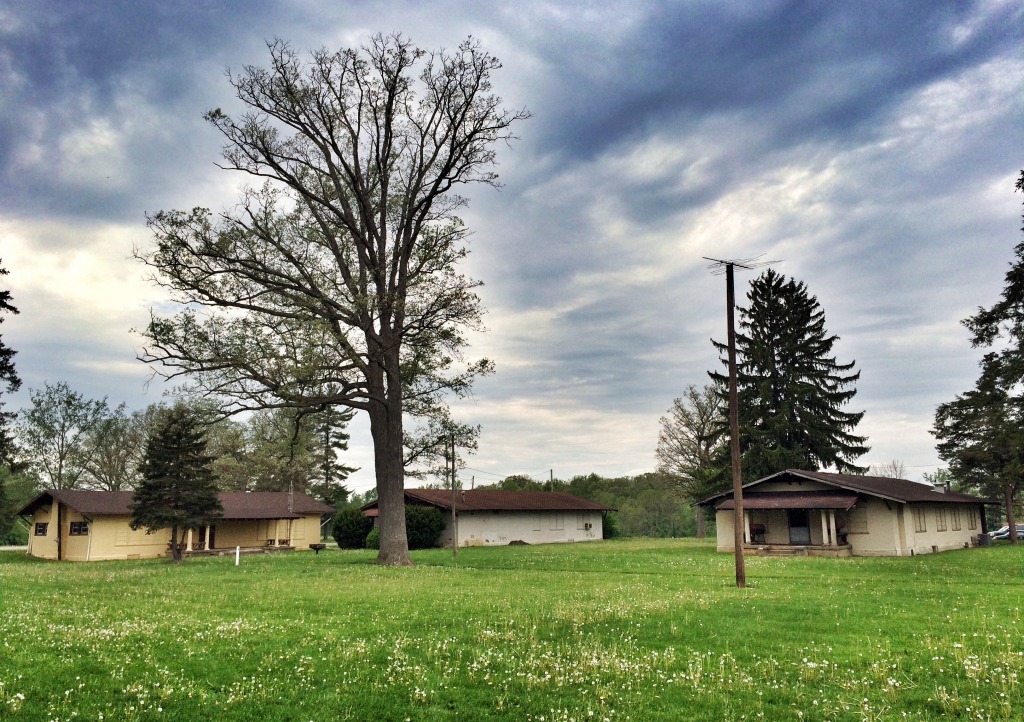