From Antietam, in Maryland, we drove a short distance to Harpers Ferry in West Virginia. Our route followed the old Chesapeake and Ohio Canal and ducked through about 300 yards of Virginia

Harpers Ferry was fantastic. There was a huge variety of things to look at both historical and scenic. The town is built on the point of land where the Shenandoah and Potomac Rivers meet and is surrounded by hills. Everywhere you look in the entire town presents a beautiful view. 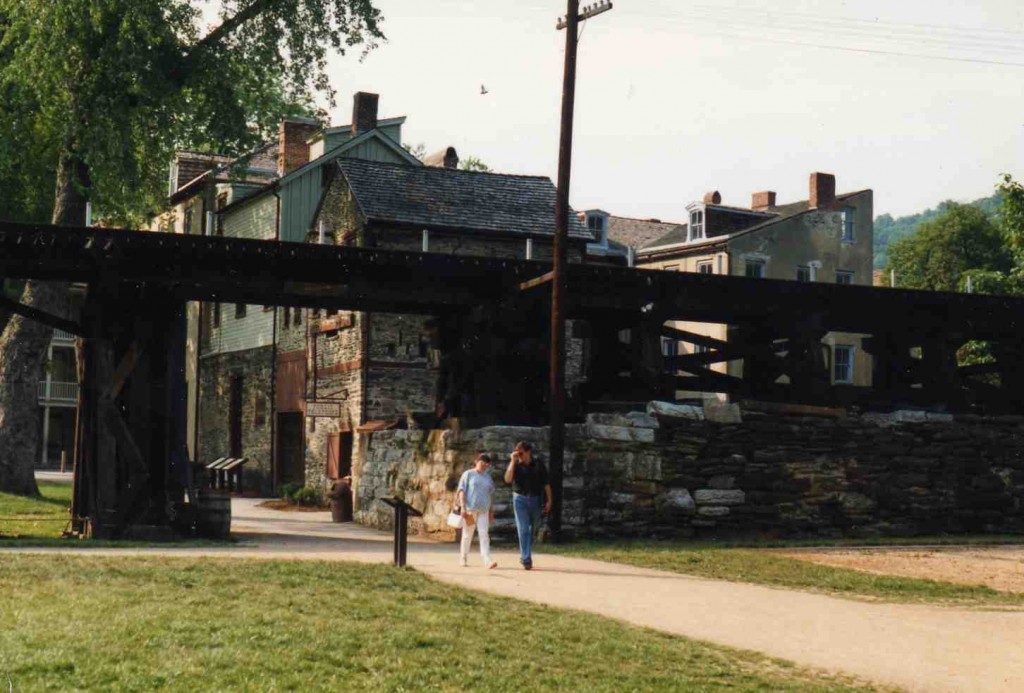 On the other side of the bridge you can see a brown board extending up the wall with white markings on it, including a mark by the second-story window. These markings show the levels of various floods that have swamped the town over the years.

We wandered up and down every street and went into every building that was open. Some of them were restored to their original function; others had displays. 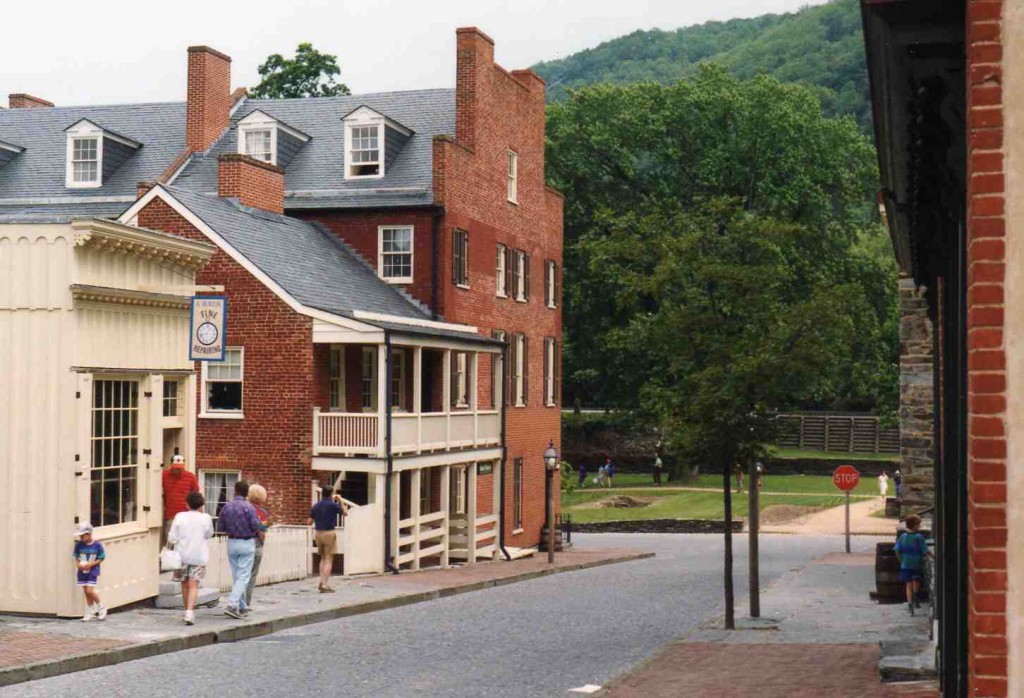 In this photo, you can see a hole in the ground in the grassy area just beyond the last building. That’s the foundation of the old U.S. Arsenal building that was burned by Federal troops when the abandoned the town at the beginning of the Civil War. One of these buildings was a dry goods store.

We hiked up Bolivar Heights behind the town and found ourselves on a section of the Appalachian Trail.

Thomas Jefferson visited here in 1783 and proclaimed this view “stupendous” and worth a trip across the Atlantic to see. Here’s the view from the rock. 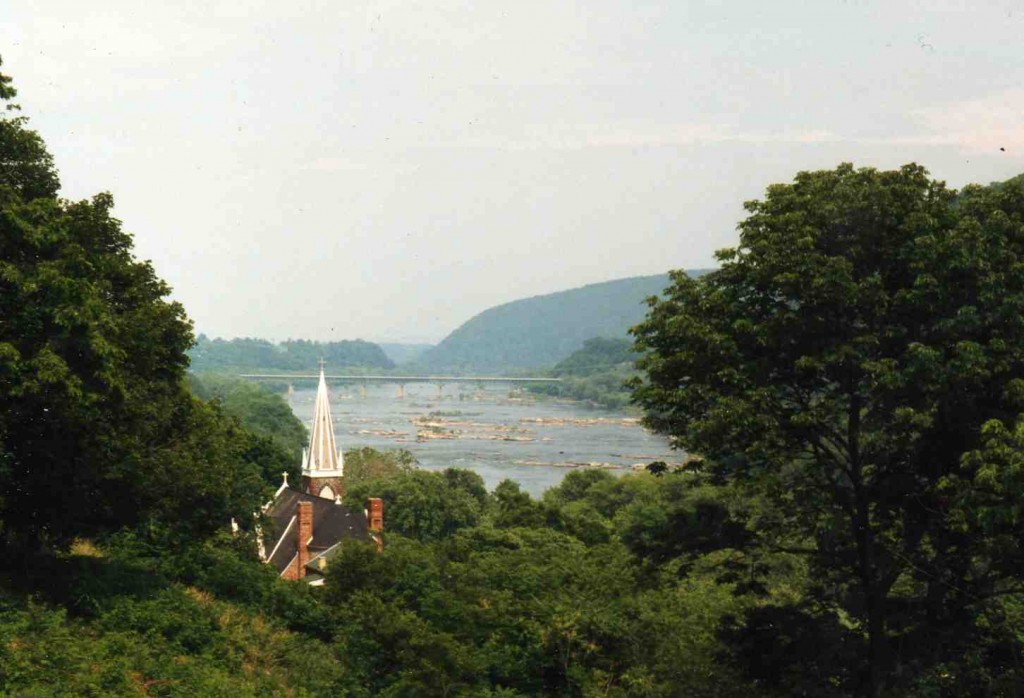 We happened upon a part of the town that wasn’t in the National Park.

This is John Brown’s Fort, where Brown and his followers were captured after their attempt to take over the town and begin a slave revolt. The building was originally the Armory firehouse. After the war, it was shipped to Chicago for the World’s Fair. When only eight people visited it in seven days, it was shipped back and rebuilt on the hill above the town before finally being relocated about 60 yards from its original location.

John Brown’s Fort is on the right in this photo. 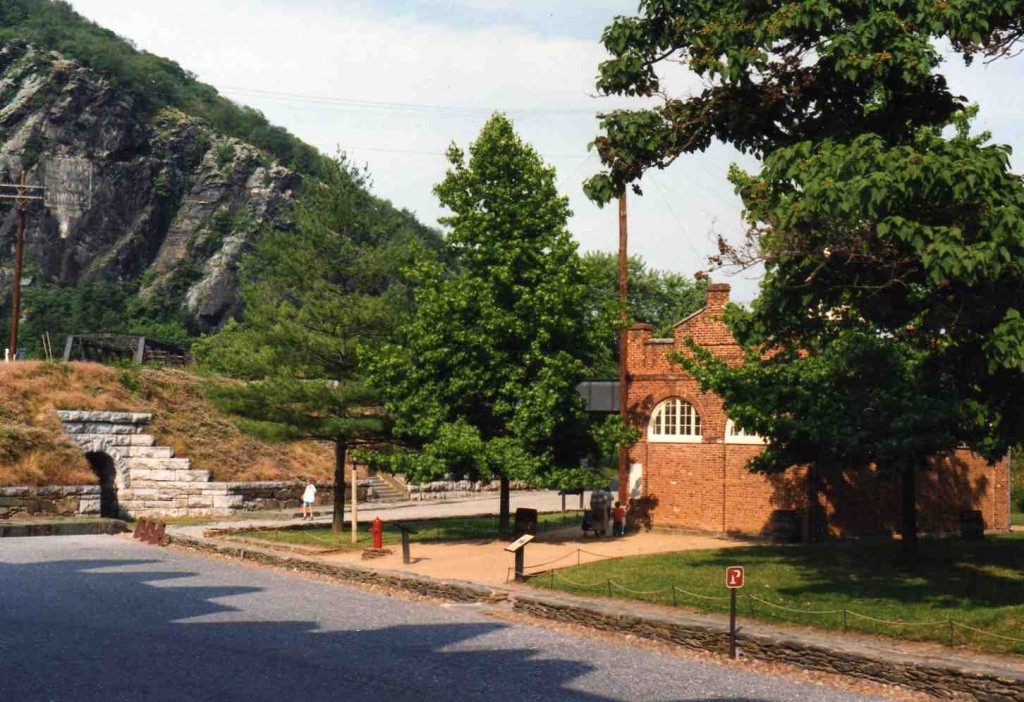 We went through that tunnel and across the railroad bridge the top of which can be seen beyond. The tracks cut through a tunnel in the cliff across the river. You can also see a sign for some kind of powder that was painted on the face of the cliff.

This entry was posted in Battlefields, Historic Buildings, National Parks. Bookmark the permalink.