Some people relax by sitting around. I relax by exploring. After three days of relative inactivity, I was ready to explore. I headed off into Oklahoma by myself to visit Honey Springs Battlefield, a Civil War site in McIntosh County. 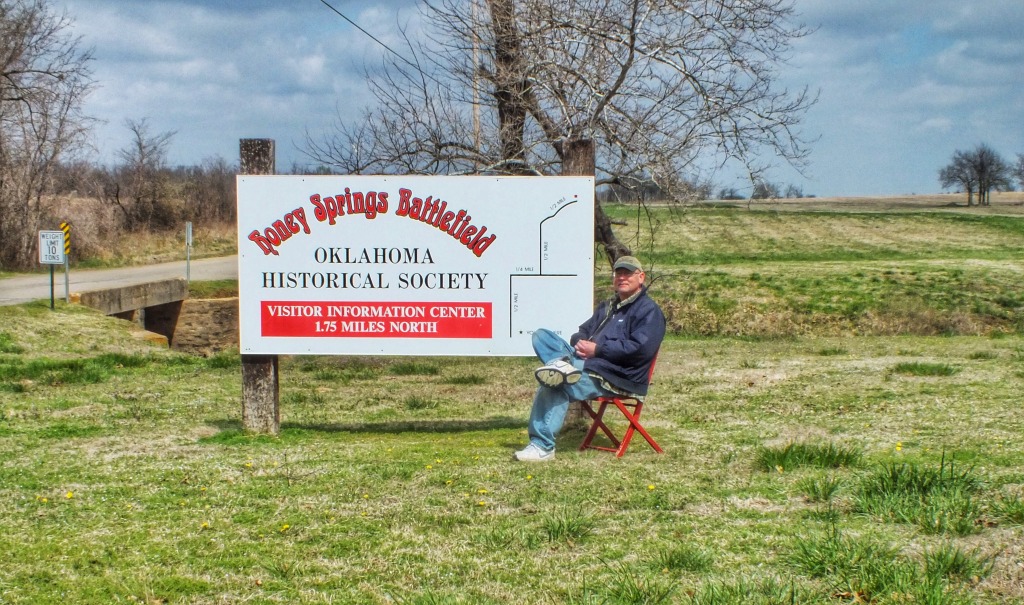 The history, in short, was this. The Union Army, under Major General Blunt, occupied Fort Gibson, on the Arkansas River near present-day Muskogee. The Confederates, under Brigadier General Cooper,  were gathering a force by the supply depot at Honey Springs, about 20 miles to the south, intending to attack the fort. Blunt decided to ward off the attack aggressively and marched 3,000 soldiers south to meet Cooper’s 5,000 Confederates. The battle took place on July 17, 1863. The fighting was fierce, but eventually the Union army prevailed. I read somewhere that the Confederate powder was wet from the steady rain that was falling. In another place, I read that the Confederates mistook a Federal line adjustment for a retreat and attacked, only to be beaten back and begin a general retreat. The fighting occurred along the Texas Road, then near a bridge across Elk Creek and then on a ridge a mile or so to the south. The Confederate Army was broken and retreated. The Union Army stopped the pursuit because the soldiers were fatigued by the march from Fort Gibson and the fighting. The Federals lost about 17 men killed and 50 wounded, the Confederates 150 dead, 400 wounded and 77 taken prisoner. It was the largest battle in what was then Indian Territory. A notable feature of the battle is that the Confederate Army consisted mostly of Indians and the Union Army mostly of Indians and Black troops from Kansas. White soldiers were a minority in both armies.

It was a cool, brisk, overcast day. I had the entire battlefield to myself the entire time I was there. The interpretive center was closed and looked like it had been for a long time. The descriptive markers along the trails were informative — or they would have been if I could have read them. Most were so worn by time and weather as to be illegible. Six trails lead off the main road to various sections of the field, and I walked all of them.

Trail One — The Federal Bivouac

The Union Army stopped to rest and eat in this field about half a mile from where the Confederates waited in the woods. 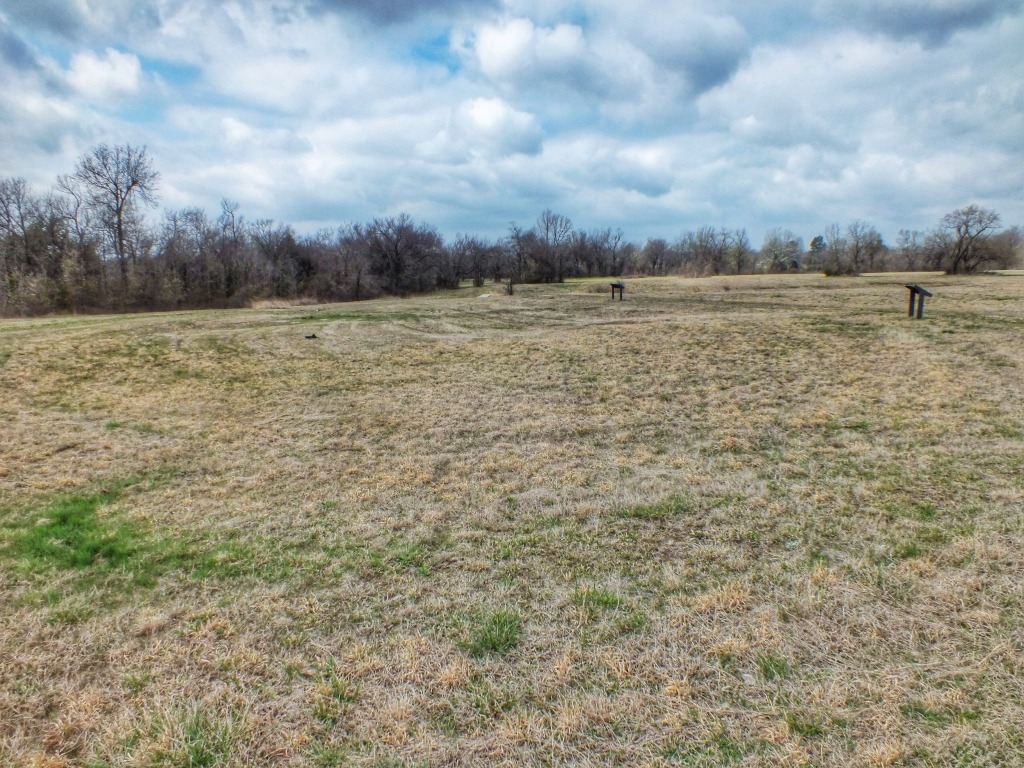 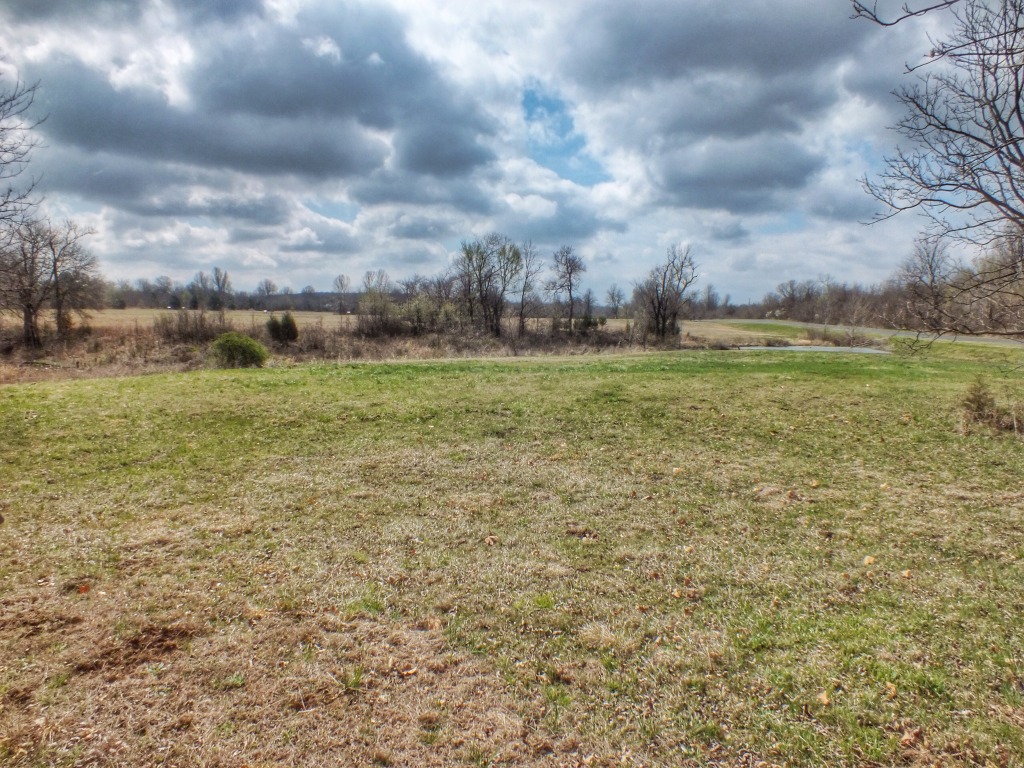 After eating, the Federals formed a line on either side of the Texas Road and deployed their artillery. The next two pictures are looking down the length of the Federal line from opposite ends of the trail. 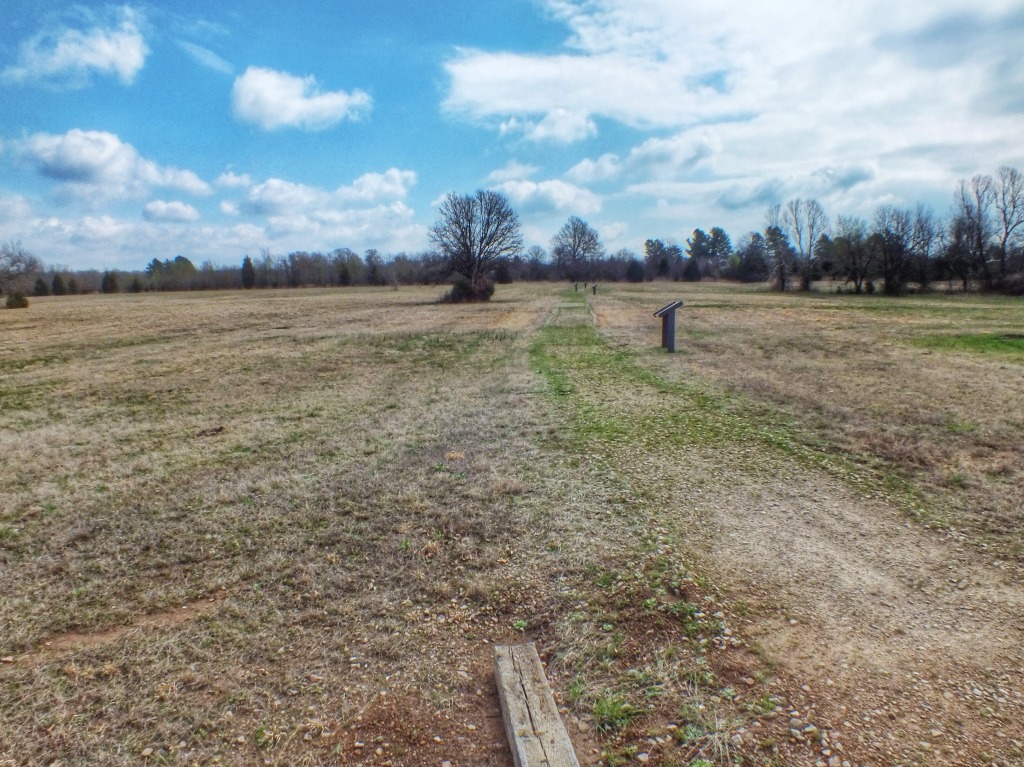 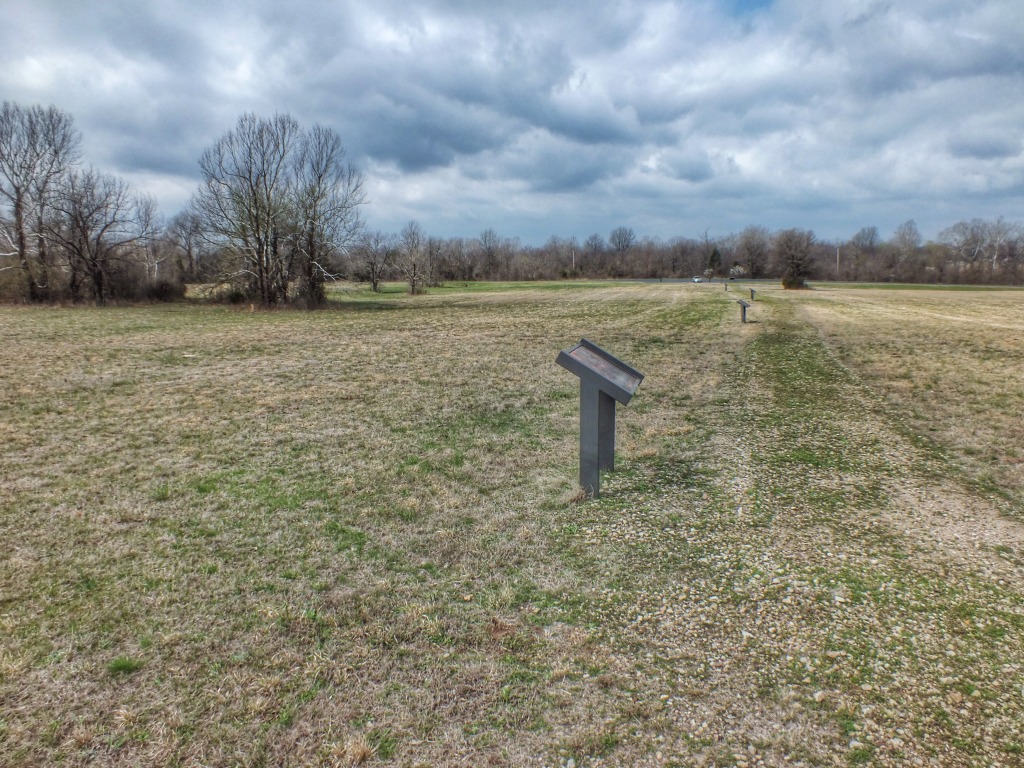 Looking from the Federal line toward the woods where the Confederates waited. The row of trees on the left are on the approximate site of the old Texas Road. 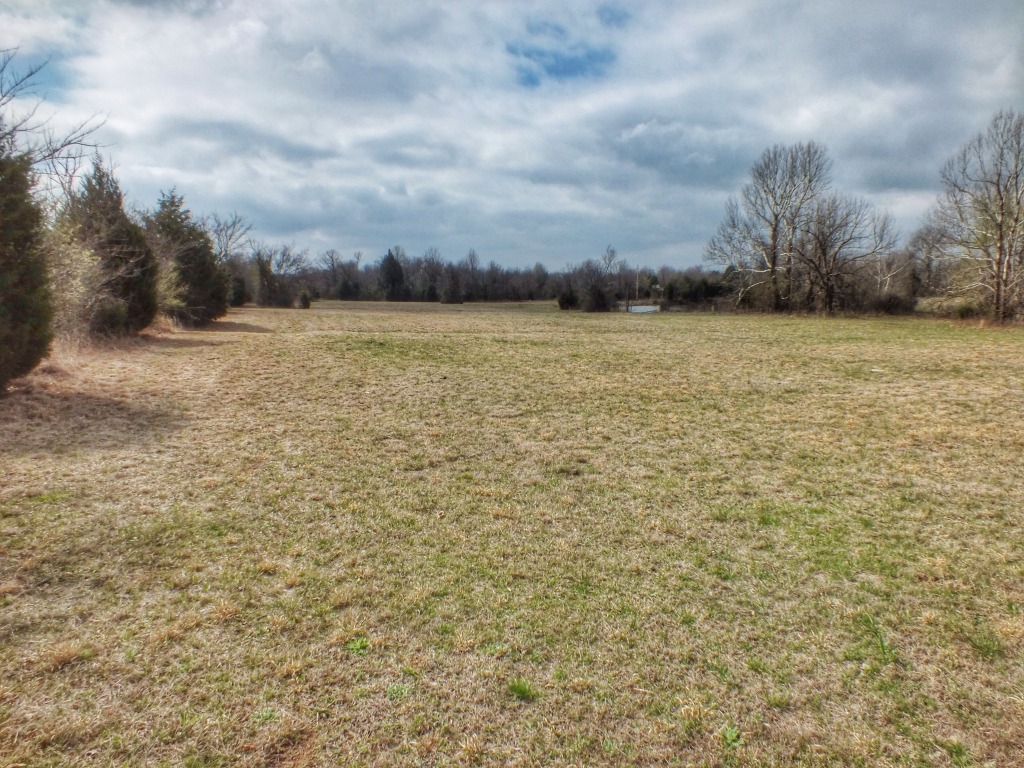 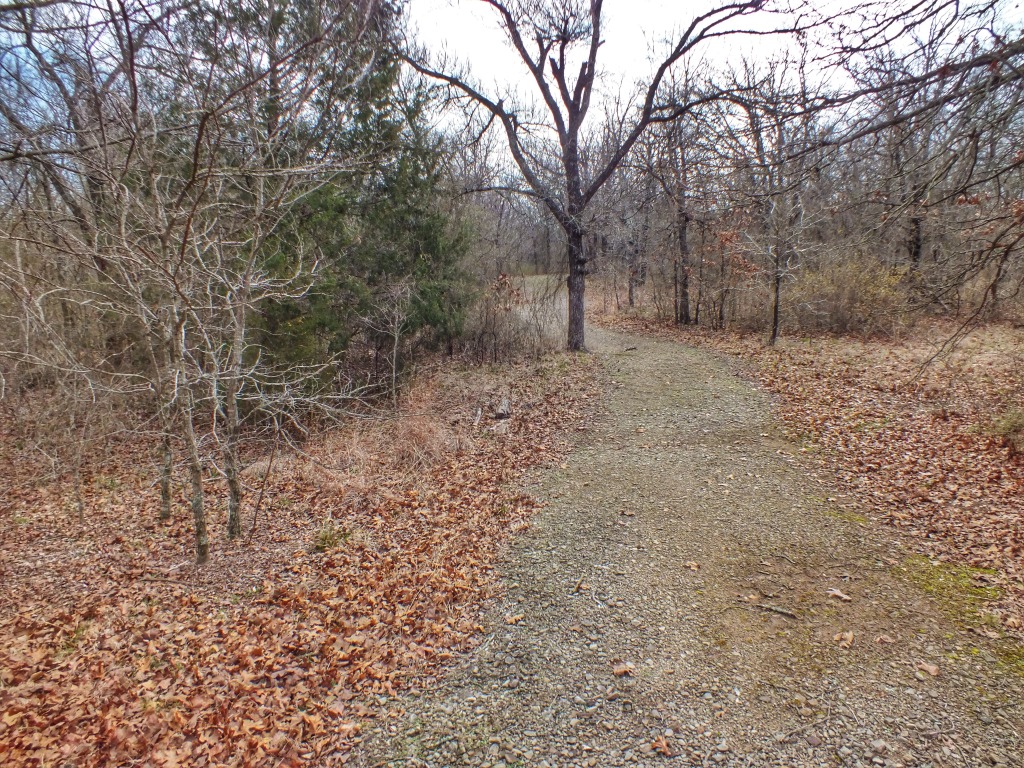 Traces of the old Texas Road 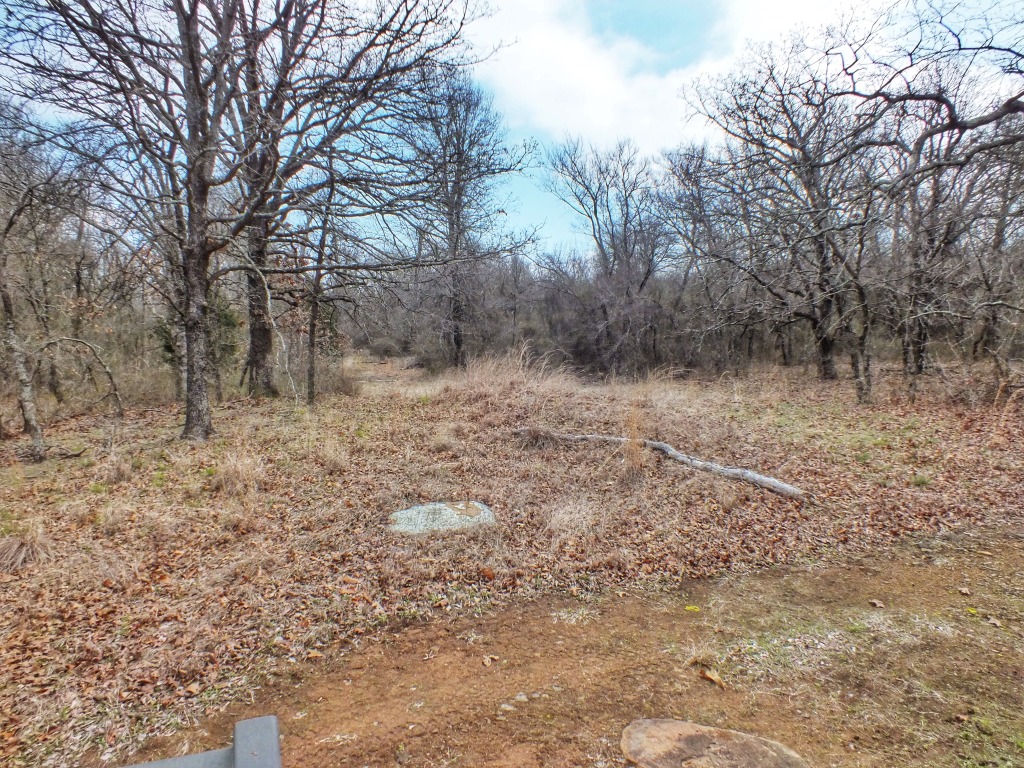 Trail Four — Fighting at the Bridge

After being pushed back from their original line, the Confederates made a second stand along Elk Creek by the bridge. Ruins of the bridge can be seen in the foreground and across the creek, almost hidden by trees. 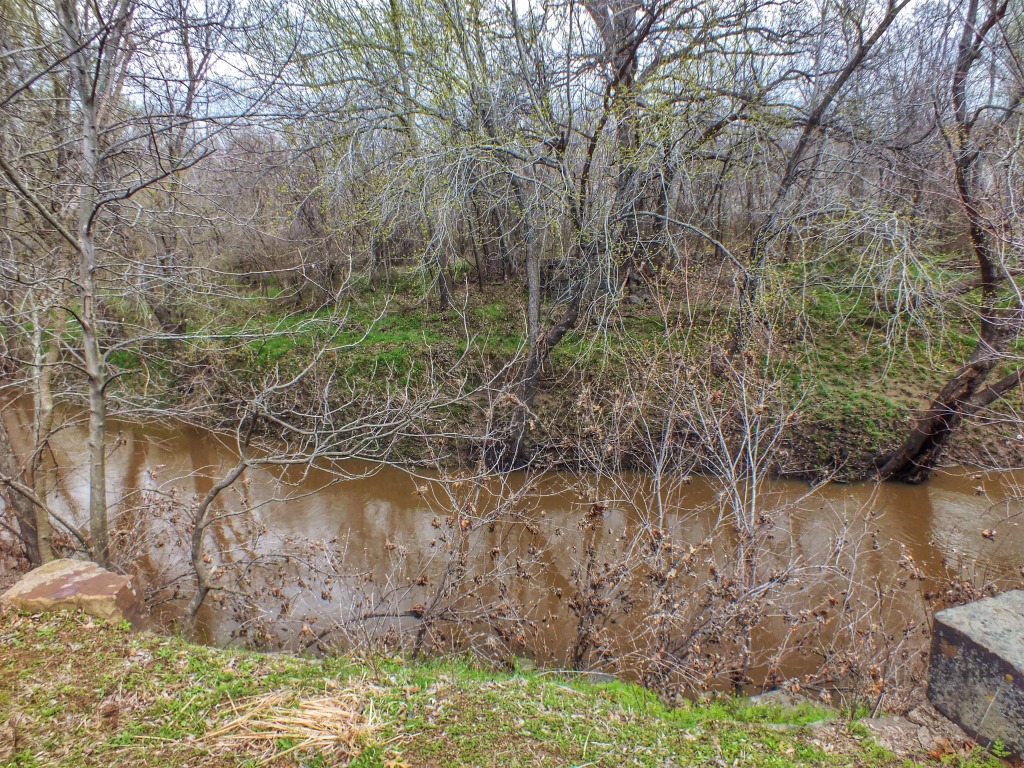 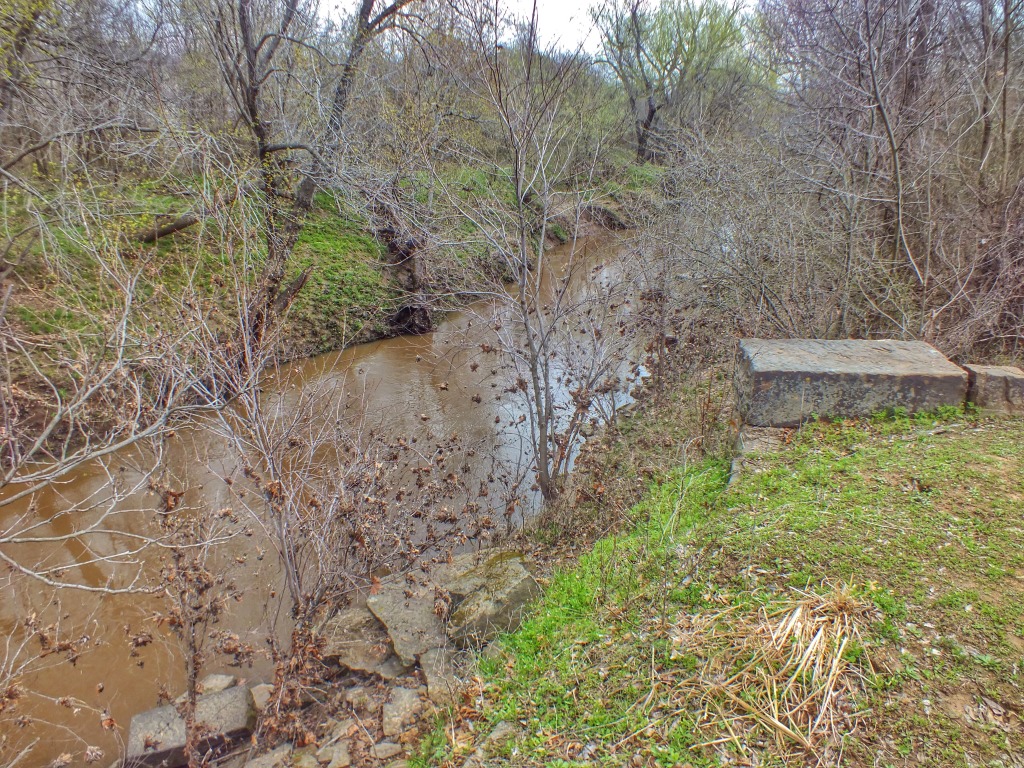 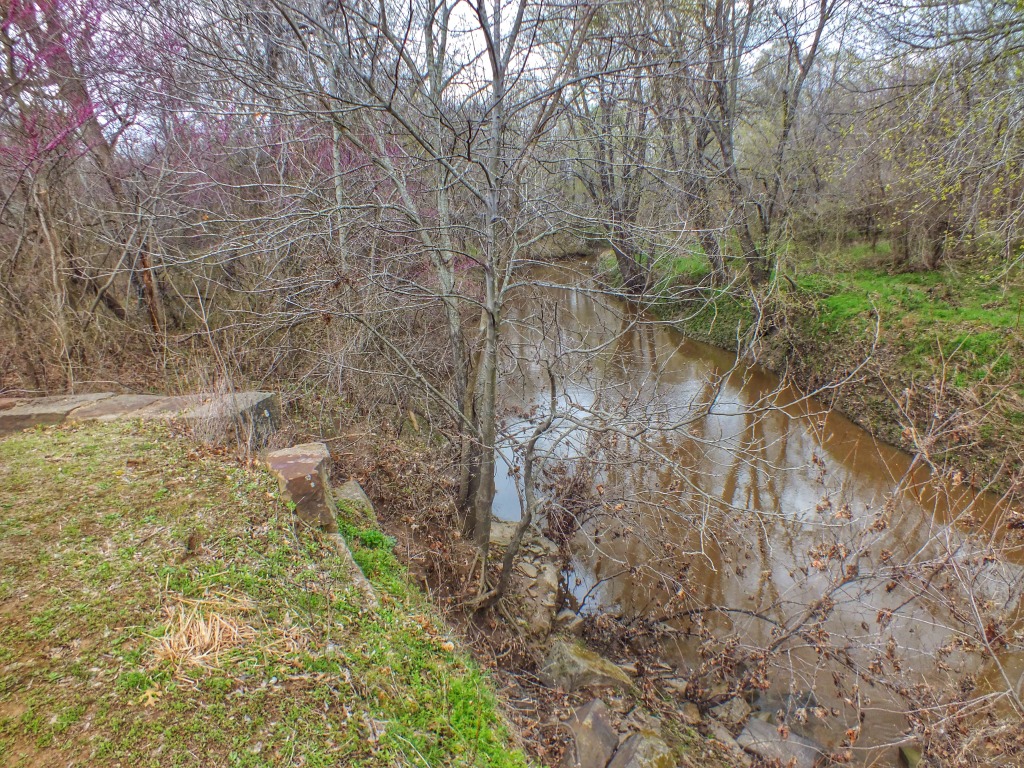 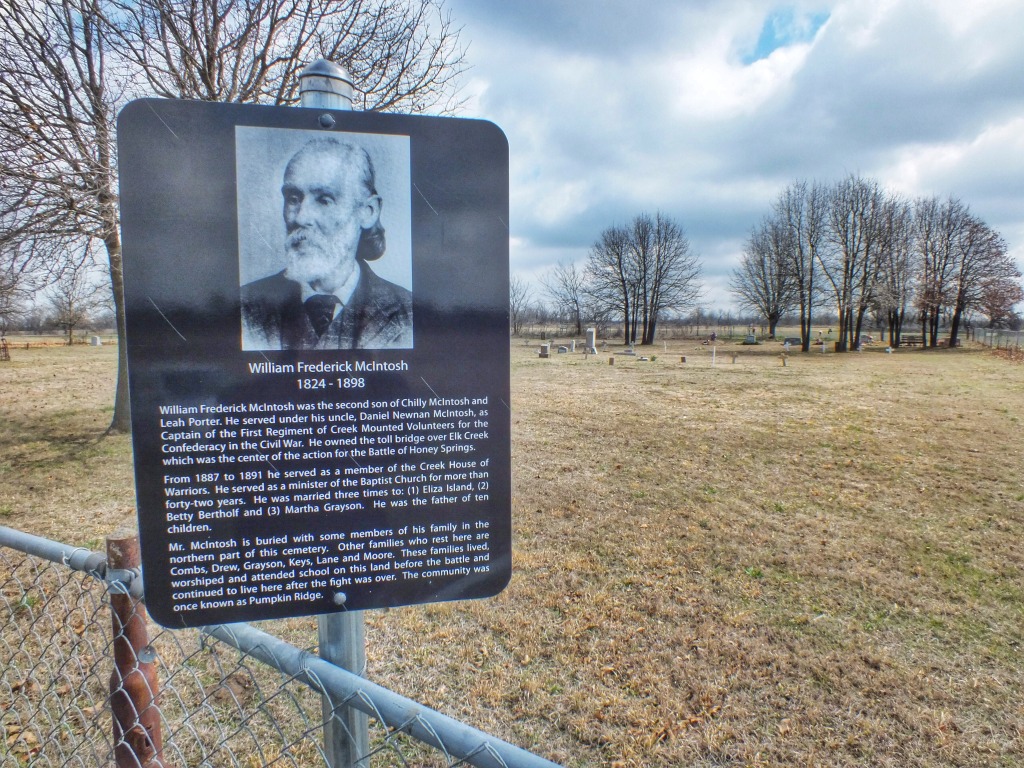 It was also in this area that the Honey Springs Depot was situated. 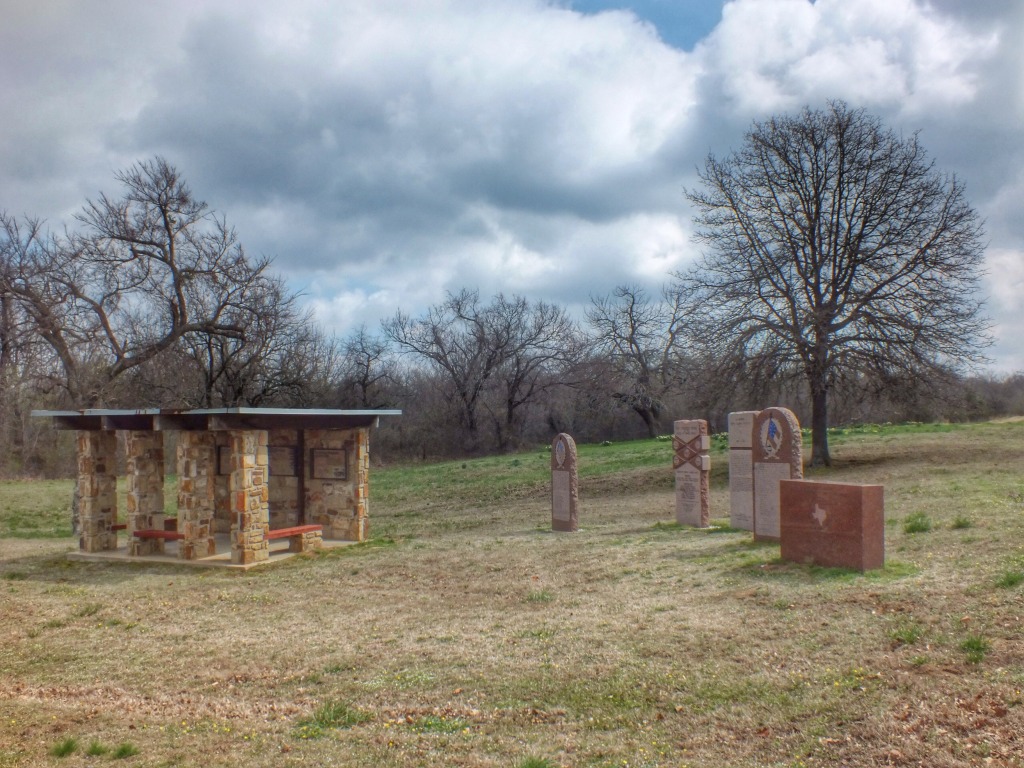 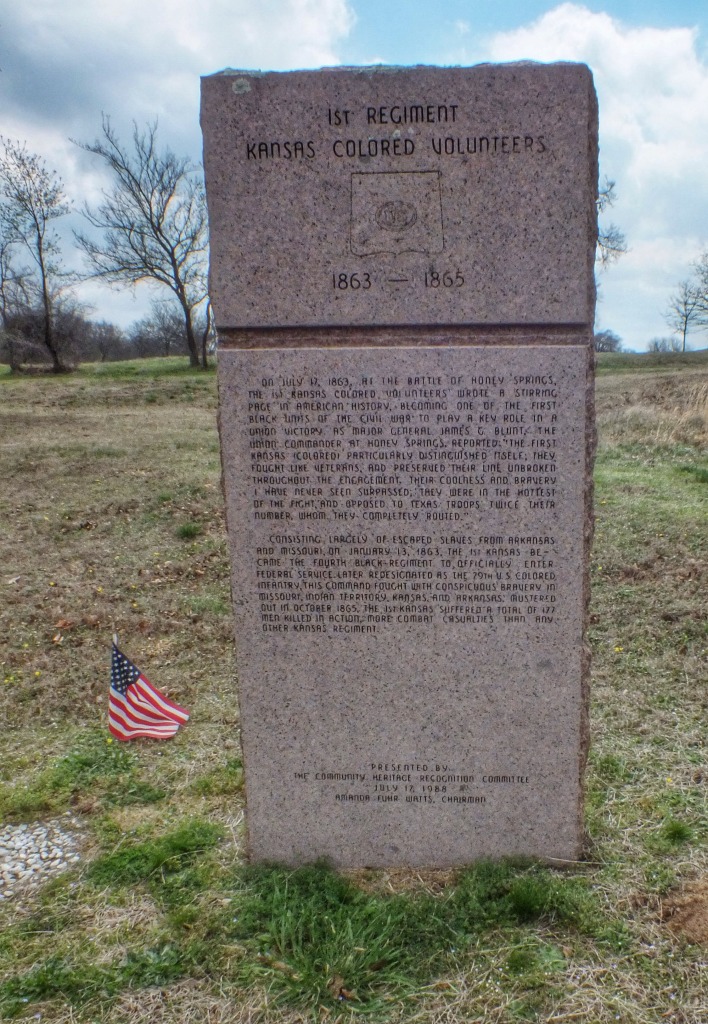 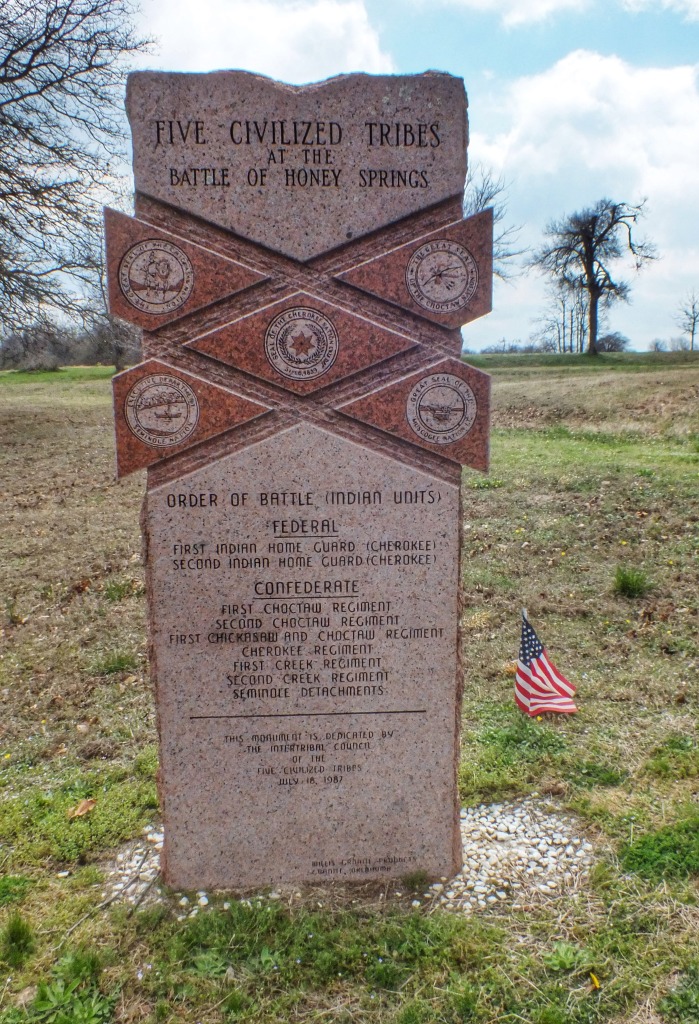 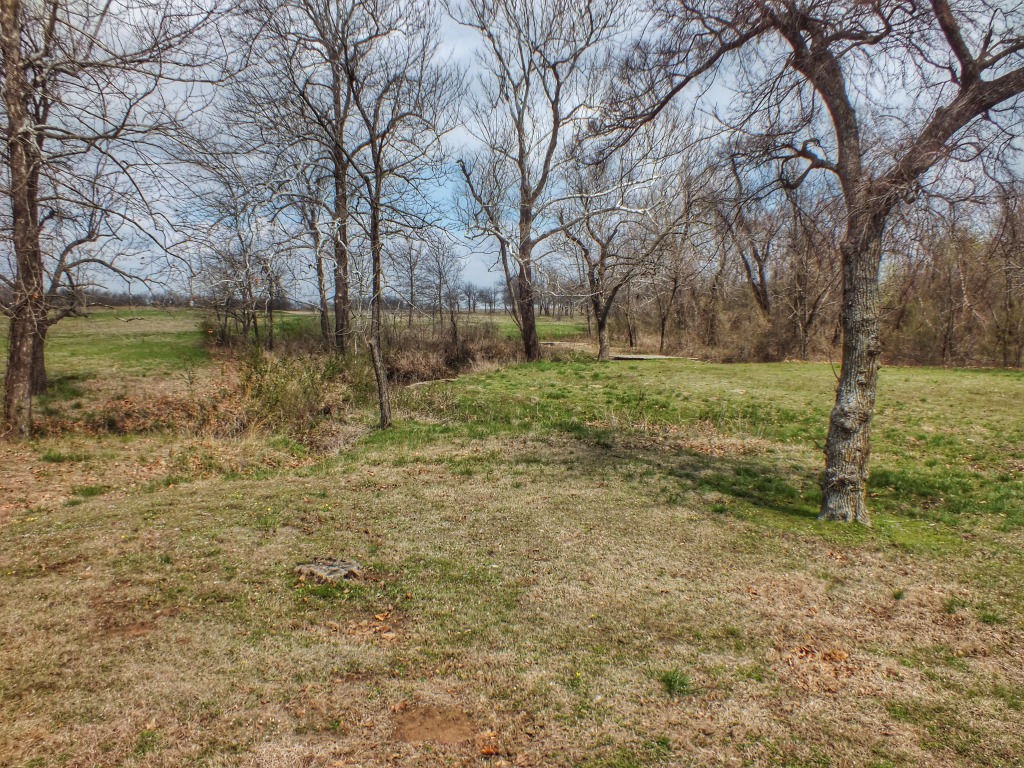 A seventh trail, located near Trail Three, led through the woods to a field. There are ruins of the birthplace of Cherokee woodcarver Willard Stone whose works can be found in various museums. 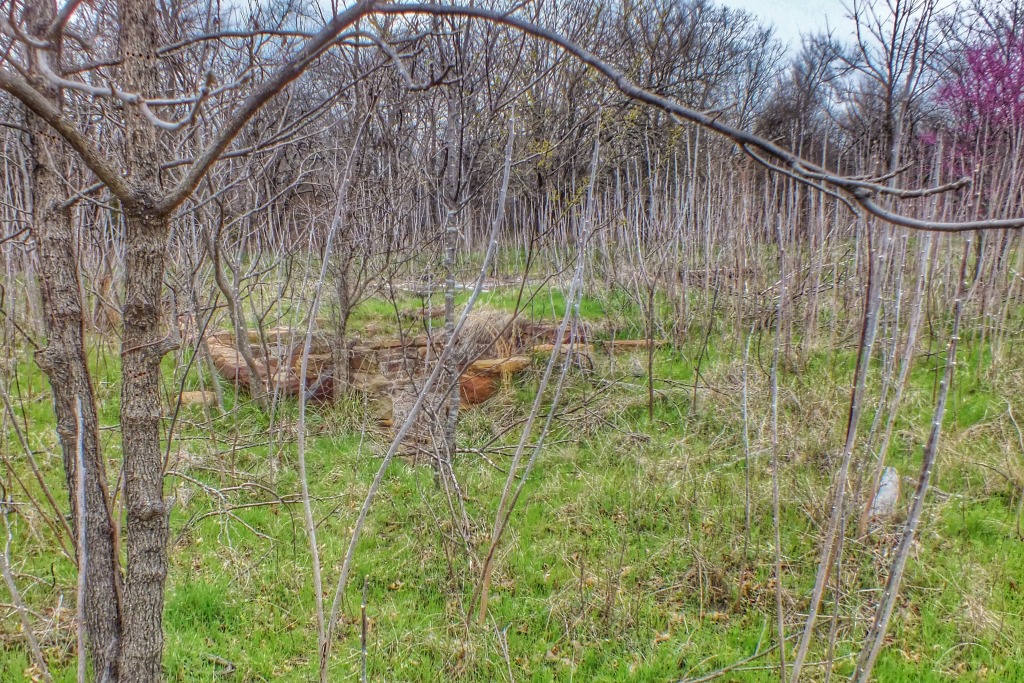 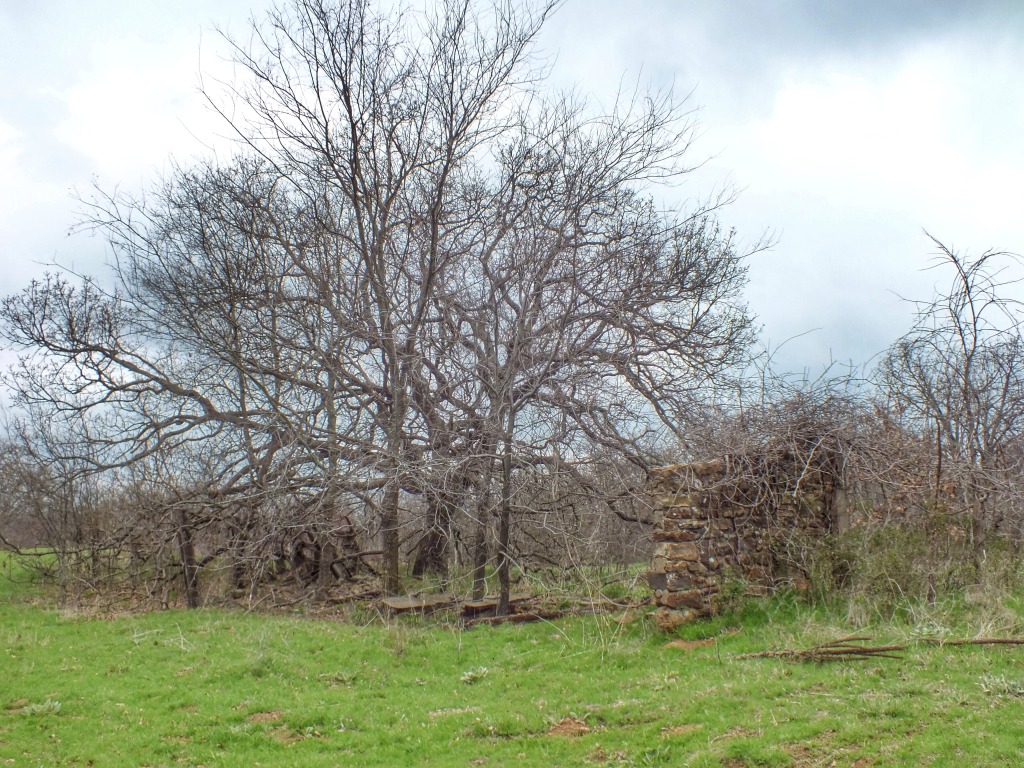 Looking over much of the battlefield from the field near the ruins. Elk Creek is down in the woods to the right.

There was also an old cemetery nearby. 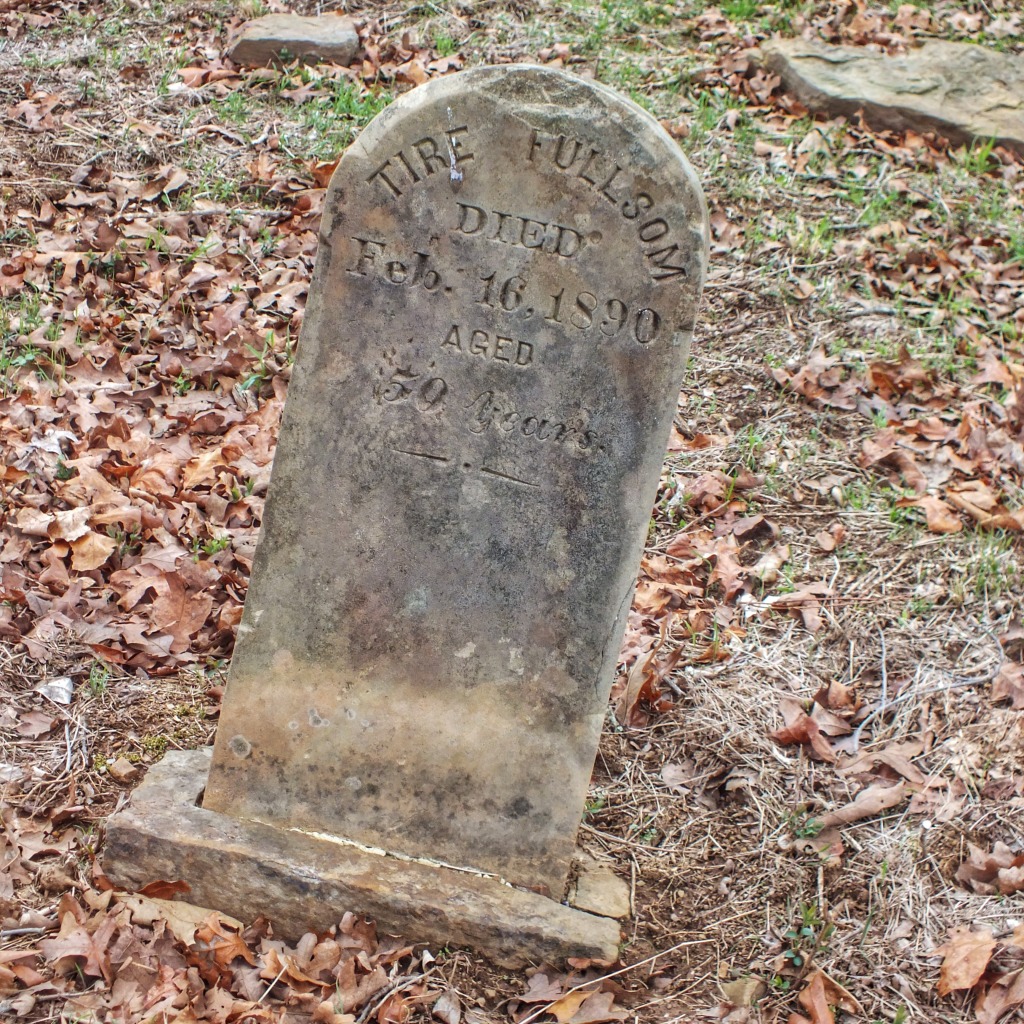 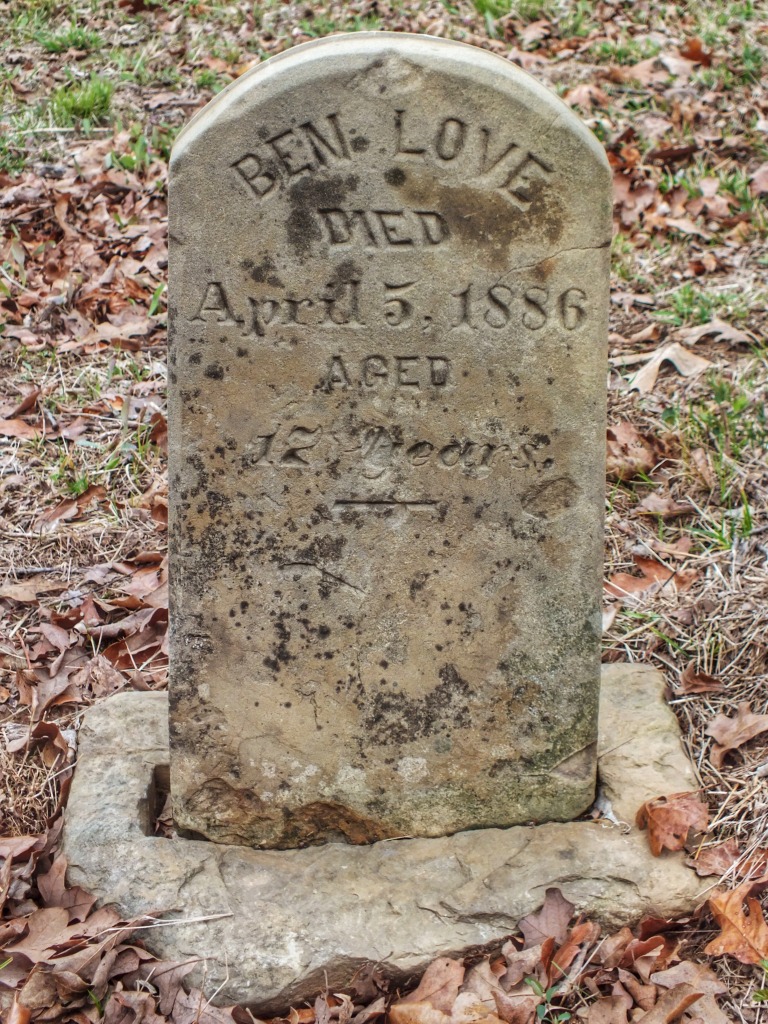 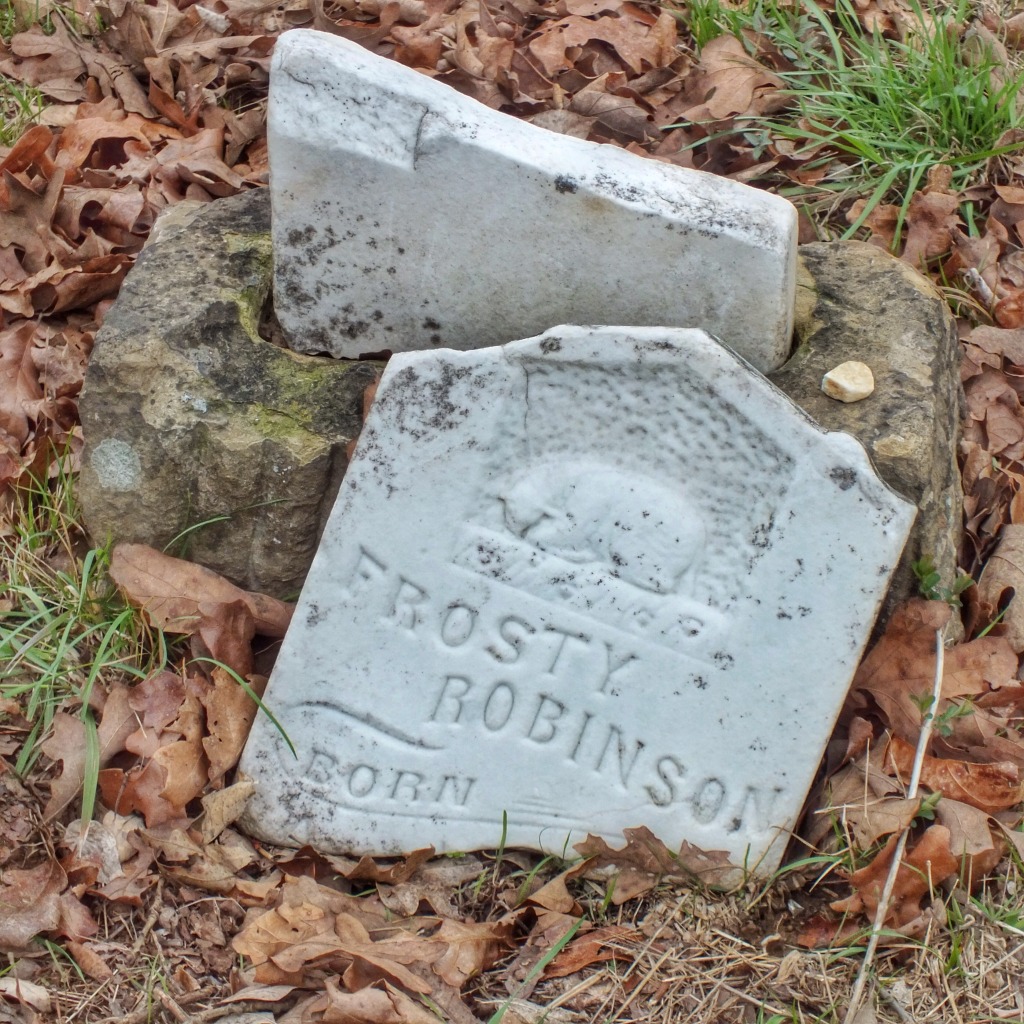 I would have enjoyed the battlefield more if I could have read the interpretive signs. Here’s a representative example. 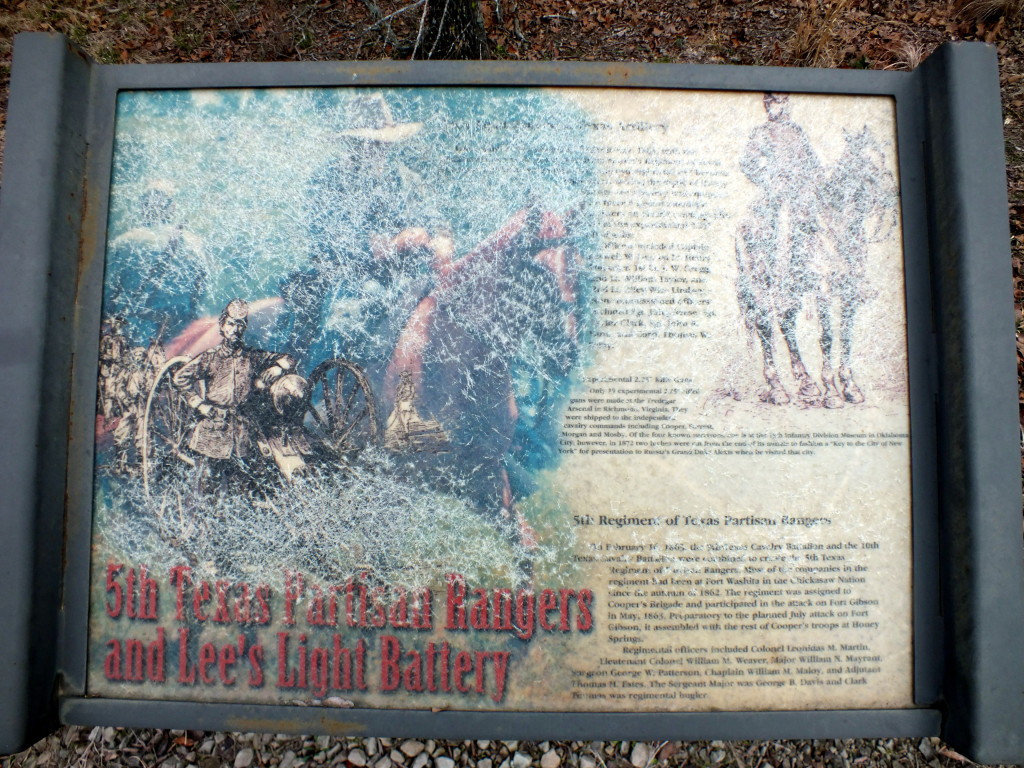 It’s not a place I’m itching to visit again, but I’m glad I went once.

This entry was posted in Battlefields, Red Chair. Bookmark the permalink.