Inside the Texas White House

When the National Park Service took over the ranch, they sent teams of people inside to photograph and chart and measure every last piece of furniture so they would know exactly what it was like when Lyndon lived there. After he died, Lady Bird wanted to convert his office into a family room. Everything got packed away in storage. When Lady Bird died last year, the park service undid all her changes and restored everything to exactly the way it had been — except for the purple shag carpet. They still have that rolled up in storage because one of Lyndon’s daughters begged them not to put it out. It’s that awful.

The room was opened to the public for the first time just a few weeks before we visited. Within two or three years, the rest of the first floor will be open for tours.

We met our guide outside the hangar. (He’s the tall guy with glasses.) Without introducing himself or welcoming us, he just began walking and talking as he went. He didn’t talk very loudly, and we all had to clump together around him to hear anything. It went on this way until we got inside the house. At that point, he seemed to get interested and spent about 20 minutes explaining everything in the room and telling us a lot of anecdotes along the way. Except for the carpet, the room looks exactly as it did when LBJ ran the country and made decisions on the Viet Nam War during his many visits as president. 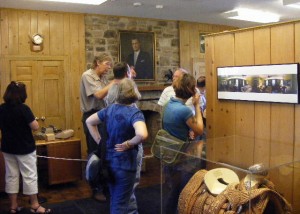 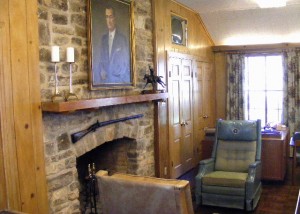 There are four desks in the room — LBJ’s and three for aides. The phone on the table in the photo below is a car phone. LBJ insisted all his aides carried one with them at all times. 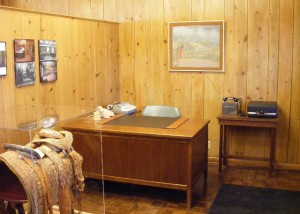 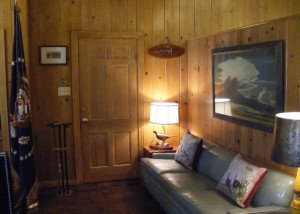 Here’s LBJ’s desk. The money on the shelf behind the desk was printed at the U.S. Mint, but it has LBJ’s portrait on it. The painting of Johnson’s beagle was commissioned by Barbra Streisand. There’s another one of his other dog on the other side of the window. 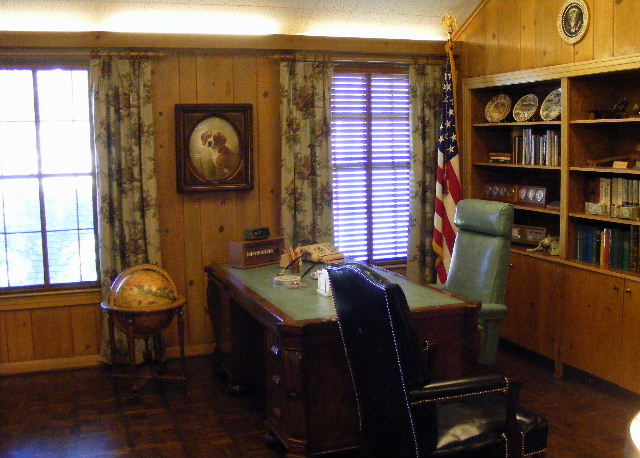