Outside the Texas White House

Lyndon Johnson made something like 75 trips to his Texas house during the five years of his presidency. He often brought his cabinet or foreign dignitaries along. The house has been closed to tours because Lady Bird was still living there, but since she died in July, 2007, the Park Service has been preparing the ground floor for visitors. One room, LBJ’s office, just opened up a couple weeks before our visit. We bought tickets for our tour, but we had to wait a half hour or so.

We spent the time wandering around the house taking photos. Here’s the house from the front. Yes, that’s a swimming pool on the right. The white building on the far right is an indoor swimming pool Lady Bird had constructed after LBJ died.

Here’s the back view of the house. The three buildings under the trees on the right are (left to right) LBJ’s airplane hanger (where his cars are currently displayed), a guest cottage used by the Secret Service agents and a trailer used by the airplane pilots when they were at the ranch.

Our guide told us that LBJ built the hanger and then bought himself a plane. Only problem was that the plane was too long for the hanger. He had to have one wall torn out and a larger space built so the plane would fit.

Here’s the west side of the house. LBJ’s office was in the low section on the left. The stone portion in the center was the original house, built in 1894 by a German immigrant. LBJ held many meetings with his cabinet and visiting dignitaries in the chairs on the front lawn.

The rocking chairs in the photo below can also be seen in the panorama above. Our guide told us there’s a famous photograph of LBJ in the closest chair and Richard Nixon in the second chair. He also said that after LBJ died, Lady Bird would sit out here and wave to tourists as they went by in the bus. As she got older, her eyesight failed. She would sit in these chairs with a friend. When the bus went by, the friend would nudge her, and Lady Bird would smile and wave. 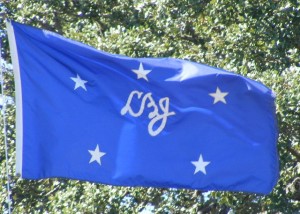 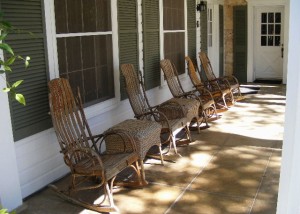 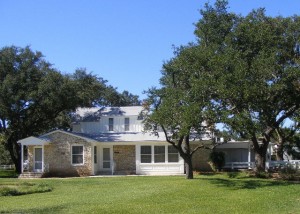 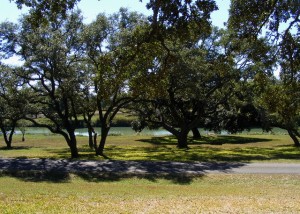 The picture on the right above shows the Pedernales River as seen from the house. LBJ used to host barbecues right here along the river for important visitors, with massive amounts of food. He’d have some of his cattle taken across to the other side of the river and have cowboys drive them along the banks to entertain his guests. Over the years, he put on more than 100 of these events. 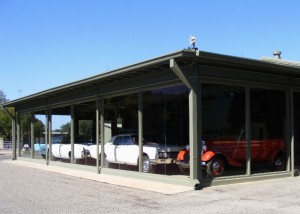 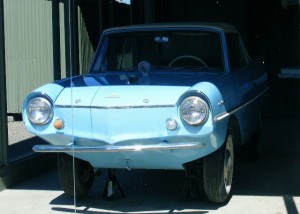 When LBJ was president, Lincoln (the car company, not the president) gave him a new car every year. When the ranch became a National Park, Lincoln donated several of the cars, and they are now on display in the hanger. The red car was used for hunting and is fitted with rifle racks. There’s also a full bar in the back, which the rangers were quick to point out didn’t really go very well with the handling of firearms.

The blue vehicle is LBJ’s Amphicar. He used to enjoy scaring the snot out of his guests by taking them for a ride around the ranch and then suddenly careening down the hill into the river screaming “The brakes don’t work! We’re going in!” 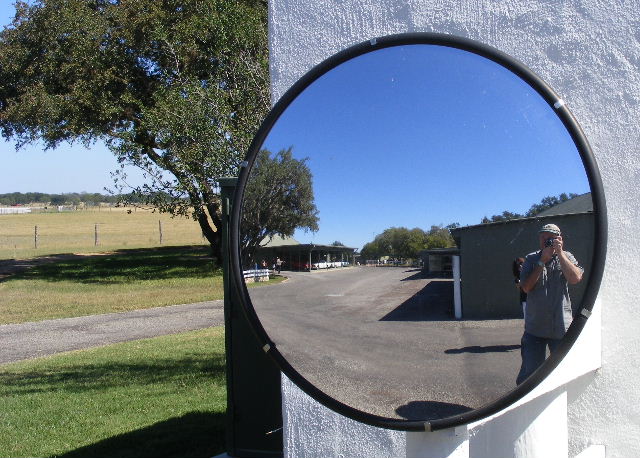 1 Response to Outside the Texas White House