selasphorus (from selas light, flame, and phoros, carrying) calliope (named for Calliope, fine-voiced chief of the Muses, who presided over eloquence and heroic poetry)

Calliope Hummingbirds are the smallest North American bird. They don’t make much noise, and they forage on low flowers, so they’re really easy to overlook. Their range is mostly west of the Rockies, but a handful wander along the east slope in the fall. The “fall” apparently begins in mid-July, because people have been reporting them over the past couple weeks. I made a try for one last weekend at Garden of the Gods without success.

At least one has also been seen during the past week in the demonstration garden in front of a Colorado Springs Utilities office building. The garden features plants that can be grown in the high desert.

As I got out of my car, a woman walked by with her dog. She asked if I was there to photograph hummingbirds. I said I was. She directed me to a patch of red flowers where she said they liked to hang out. I walked over and soon saw an immature male Broad-tailed Hummingbird. It was occasionally feeding on the flowers, but most of the time it sat in nearby trees. Whenever another hummer would show up, it would fly down and aggressively chase it out of the area. This was frustrating because they were moving too fast for me to identify.

After about half an hour, a woman came by with a camera. She said she’d seen one on the other side of the building by the parking lot. She wandered over there, and when she didn’t come back after five minutes or so I wandered over there too. She was standing by a small island that was covered by low-growing orange flowers. As I approached, I saw three hummingbirds flying around the area. 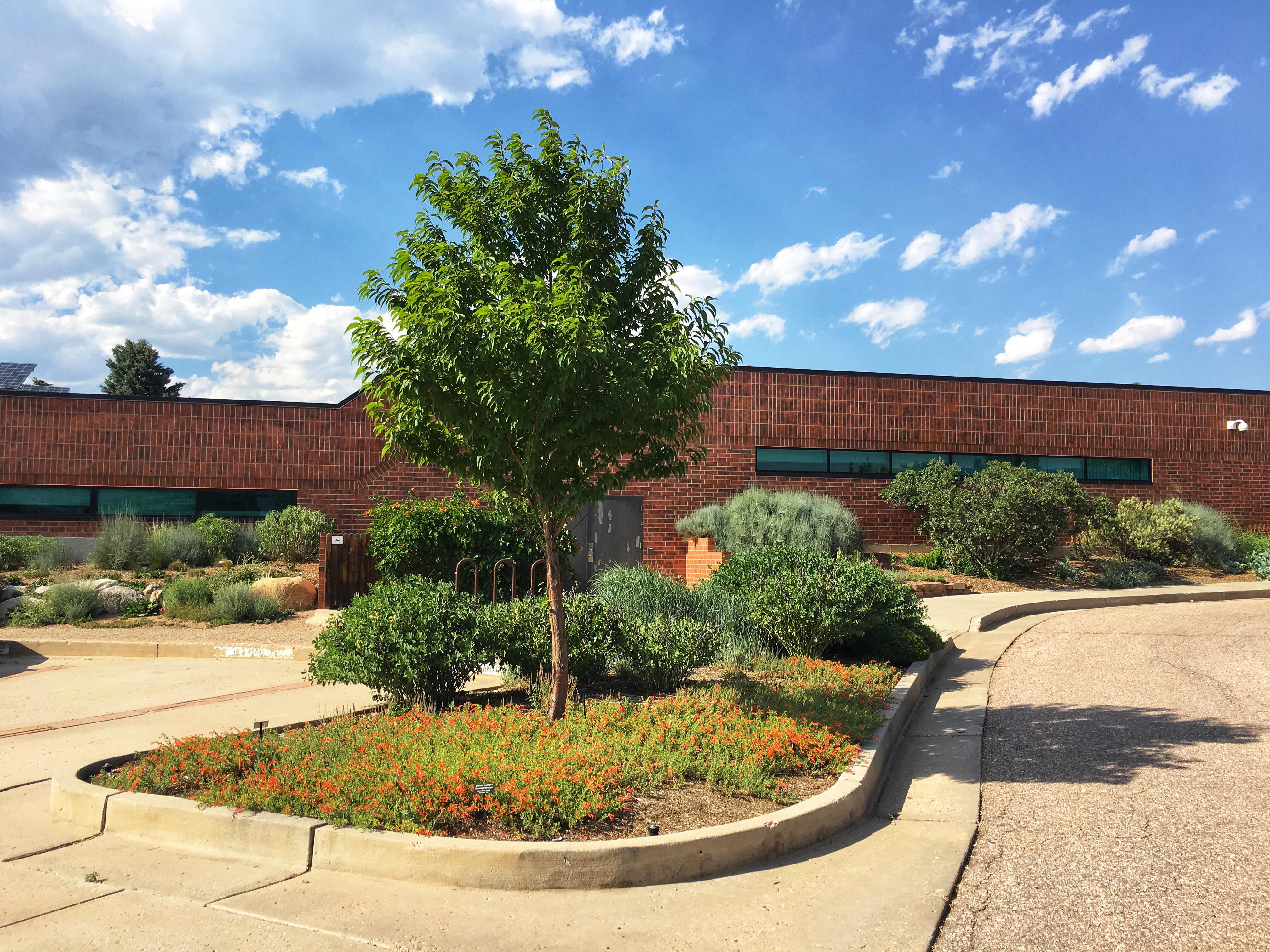 The woman left and I settled in. The first bird I looked at was a male Calliope Hummingbird. It hung around for about two minutes, long enough for me to get a few photos. 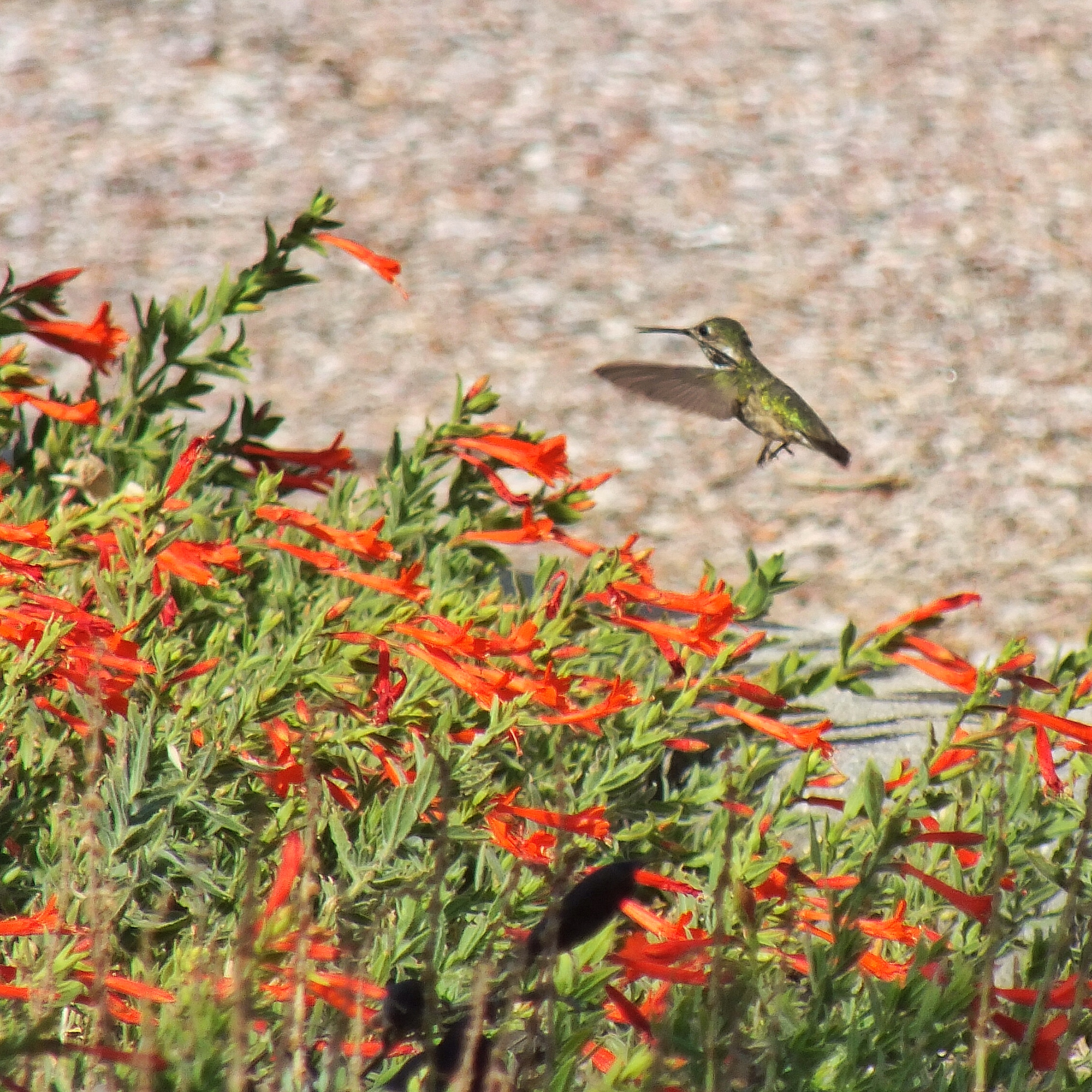 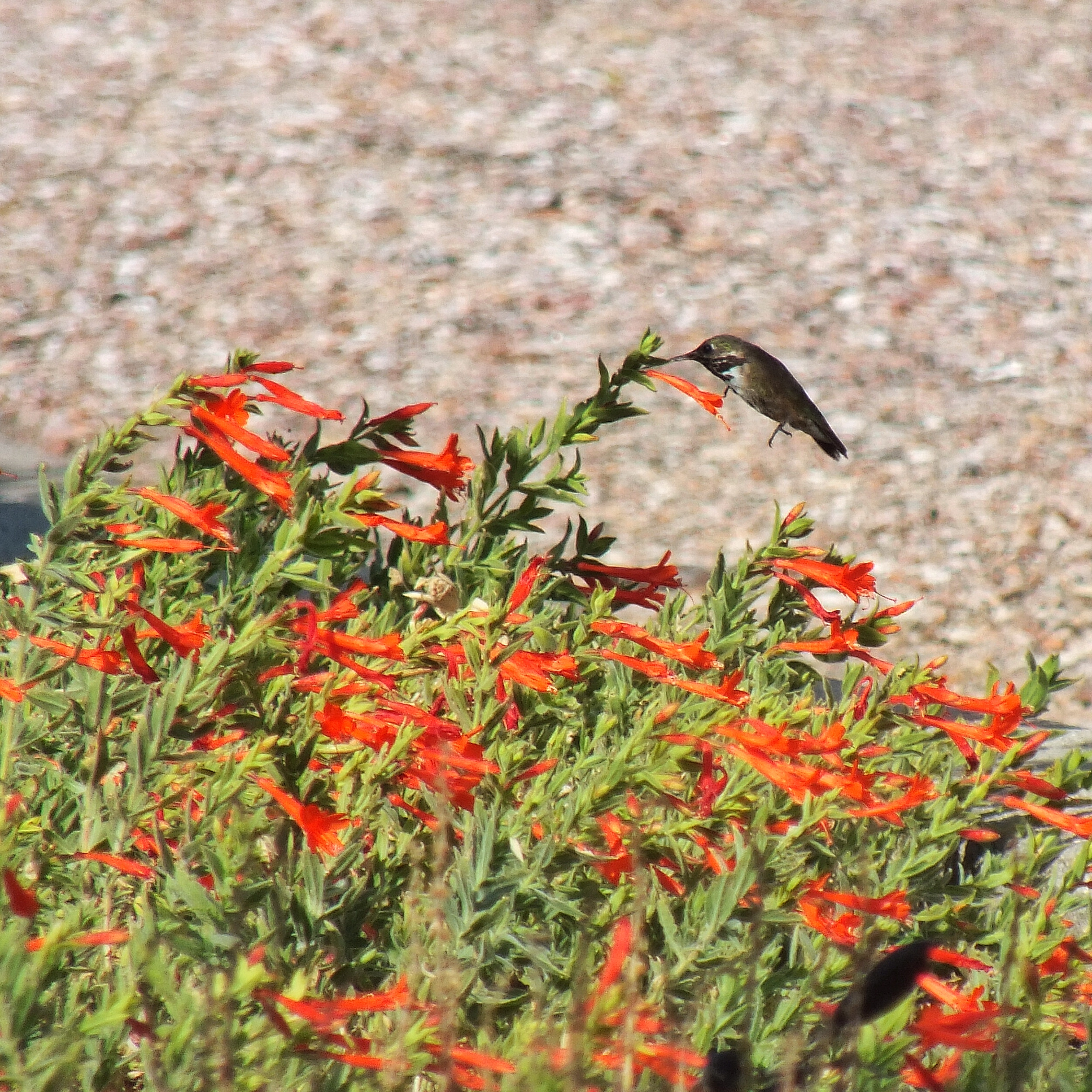 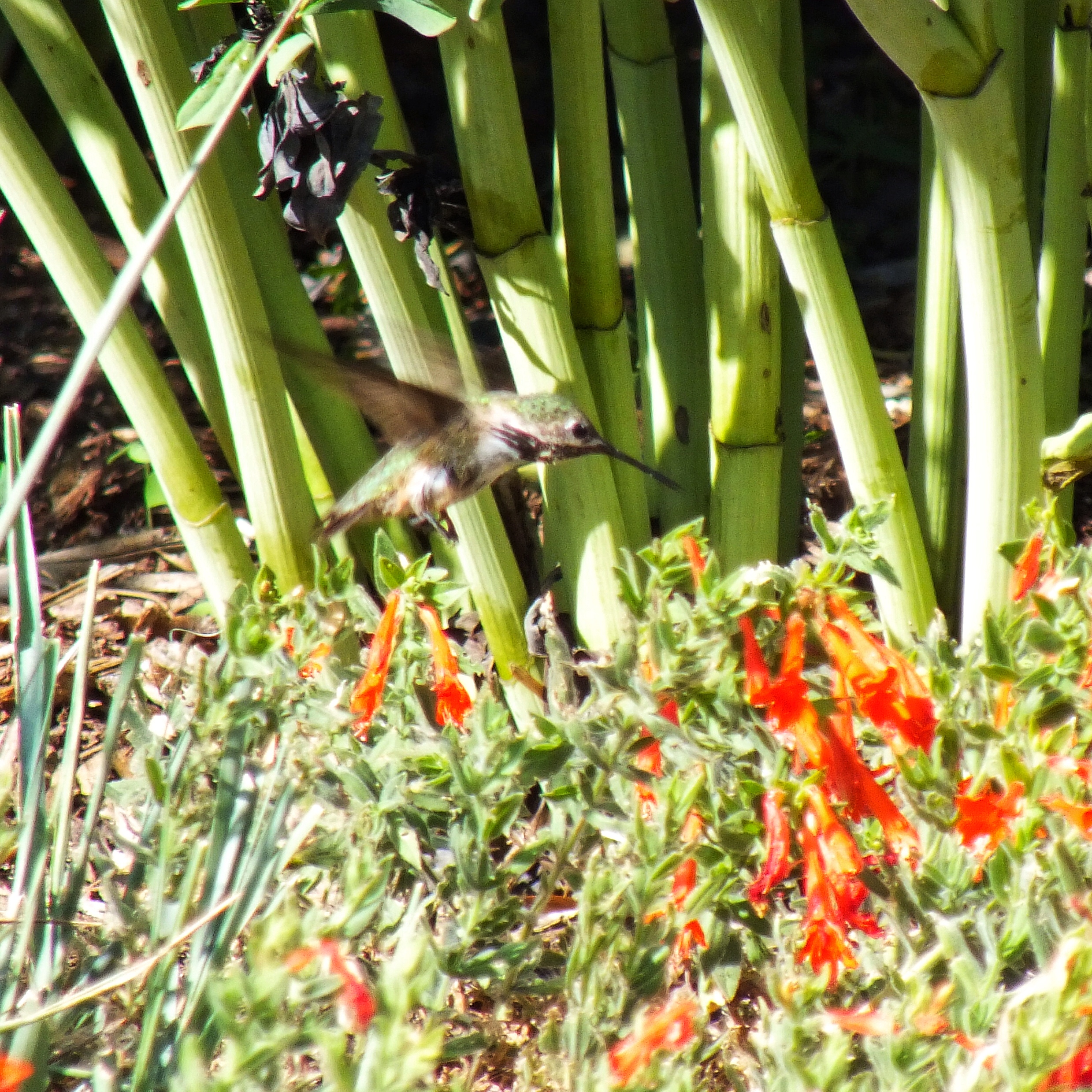 It was very small, with a short tail. The streaky pink gorget (throat) is diagnostic. It took off toward the main garden, and although I hung around for another 15 minutes, I didn’t see it again. There were several other hummingbirds that continually visited the garden and chased each other. I think one of them, which I got a very close, very brief, look at, was a female Calliope, based on it’s very small size.

The next day, we visited St. Elmo in the Collegiate Peaks. The owners of the general store have hummingbird feeders hung all around the building. The hummingbirds are everywhere. I spotted three species (Broad-tailed, Rufous, and Calliope) and was able to observe them from less than a yard away. There were at least two males and one female Calliope Hummingbird. The male in the photo is with a female Broad-tailed, giving a good idea of the difference in size and tail length. 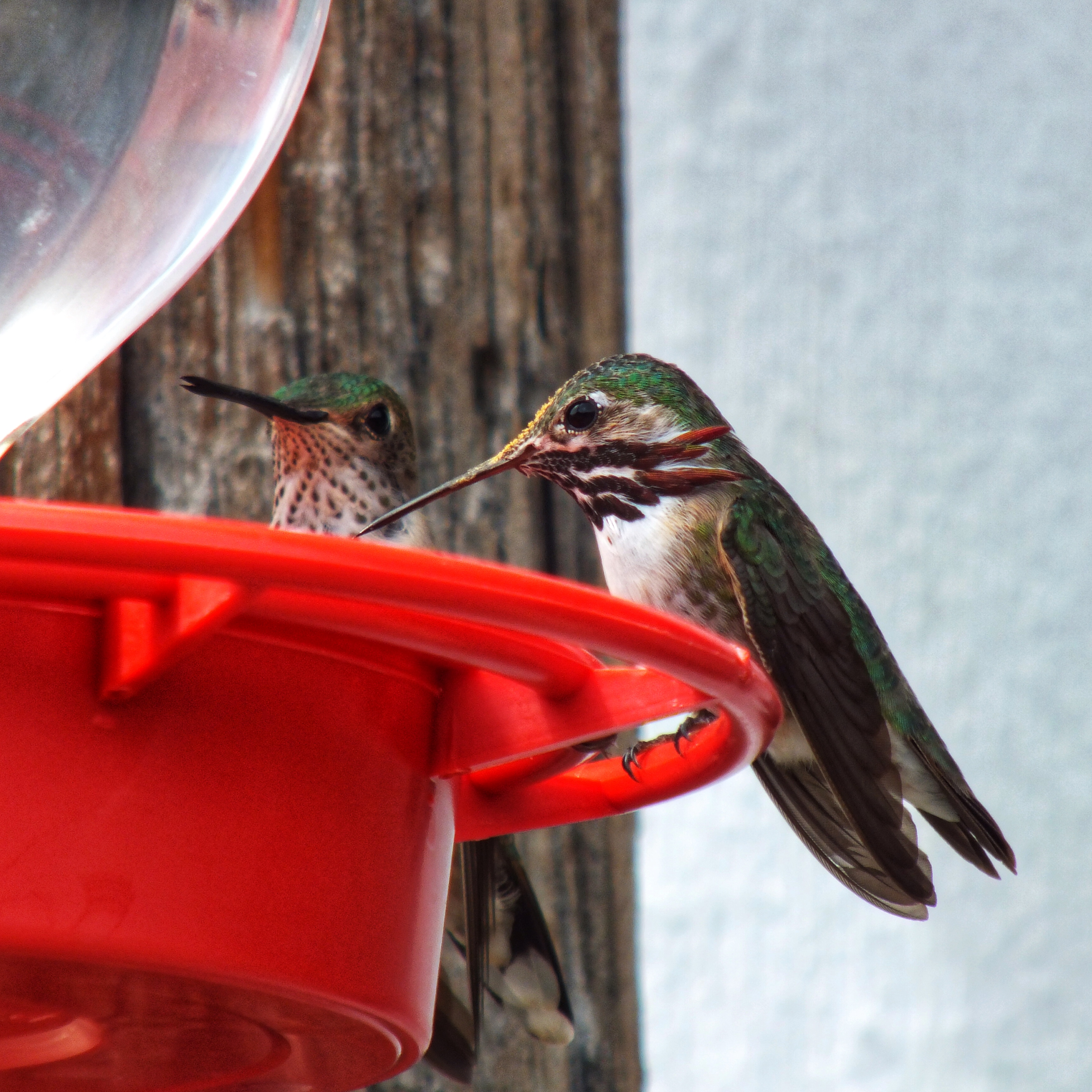 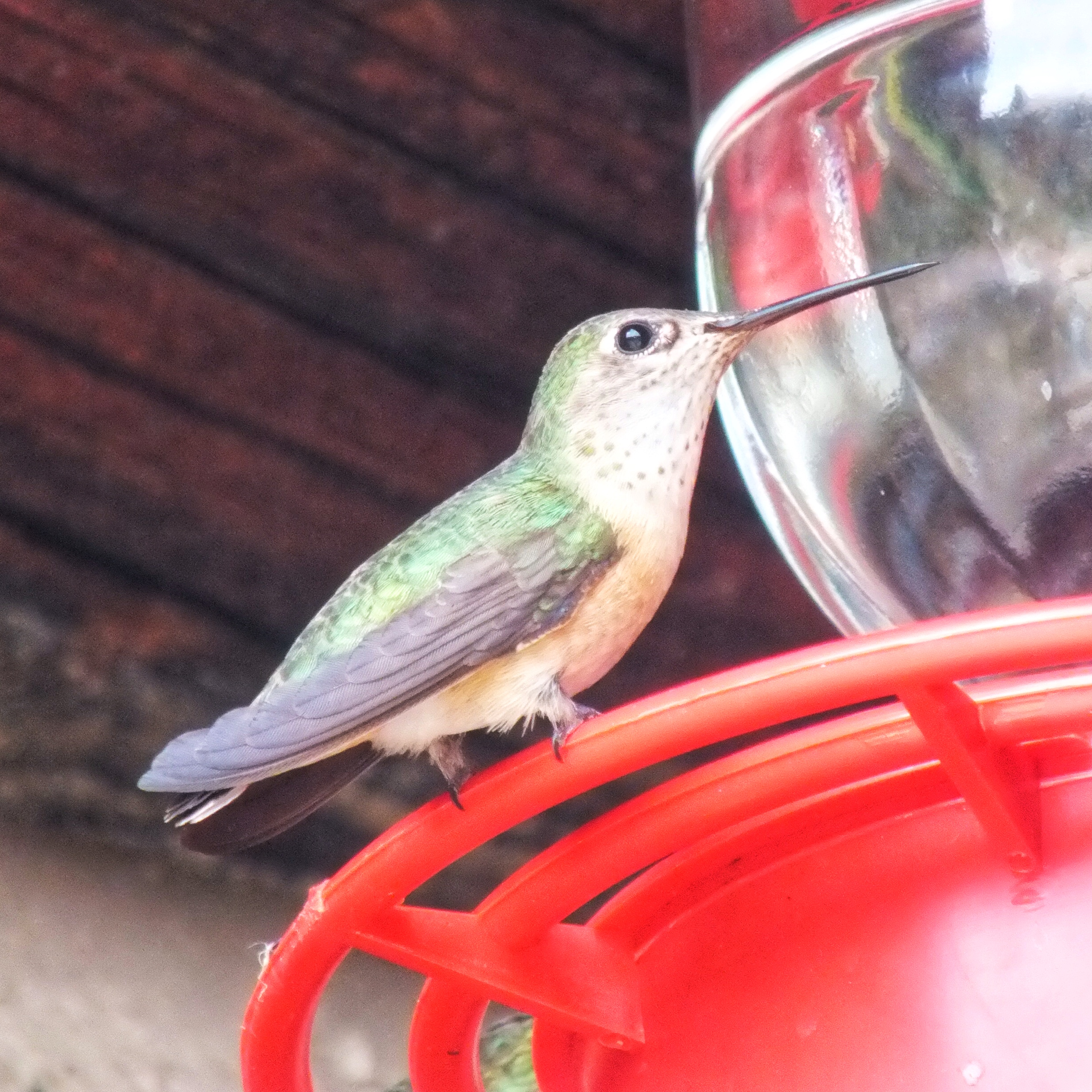