While I was birding in Pueblo yesterday, exciting things were happening at Memorial Park in Colorado Springs. Birders were reporting Barrow’s Goldeneye, Greater Scaup, and Redhead. The last isn’t rare or difficult to find, but I didn’t have on on my 2020 list yet. I drove down midday and walked around the lake. Much of it was frozen, but there were three patches of open water.

I walked around the lake so I could look at and photograph the birds in each patch with the best possible light. The ones I was looking for were all on the west side, opposite from where I parked.

I found the Barrow’s Goldeneye almost immediately. It was diving along the edge of the ice about 40 yards out from shore. Shortly after I found it, it and several Common Goldeneyes swam across in front of me, about 25 yards out. The sun was high, but this time of year it’s far enough in the south to give me fair light. That’s the Barrow’s on the left. You can see that it has more black on the back, a black “spur” that points down behind the neck, a different head shape, a different shaped head patch, and a different color sheen on the head feathers. The sheen isn’t always a noticeable, or reliable, mark. But in this case, with both species in the same light, it’s diagnostic. 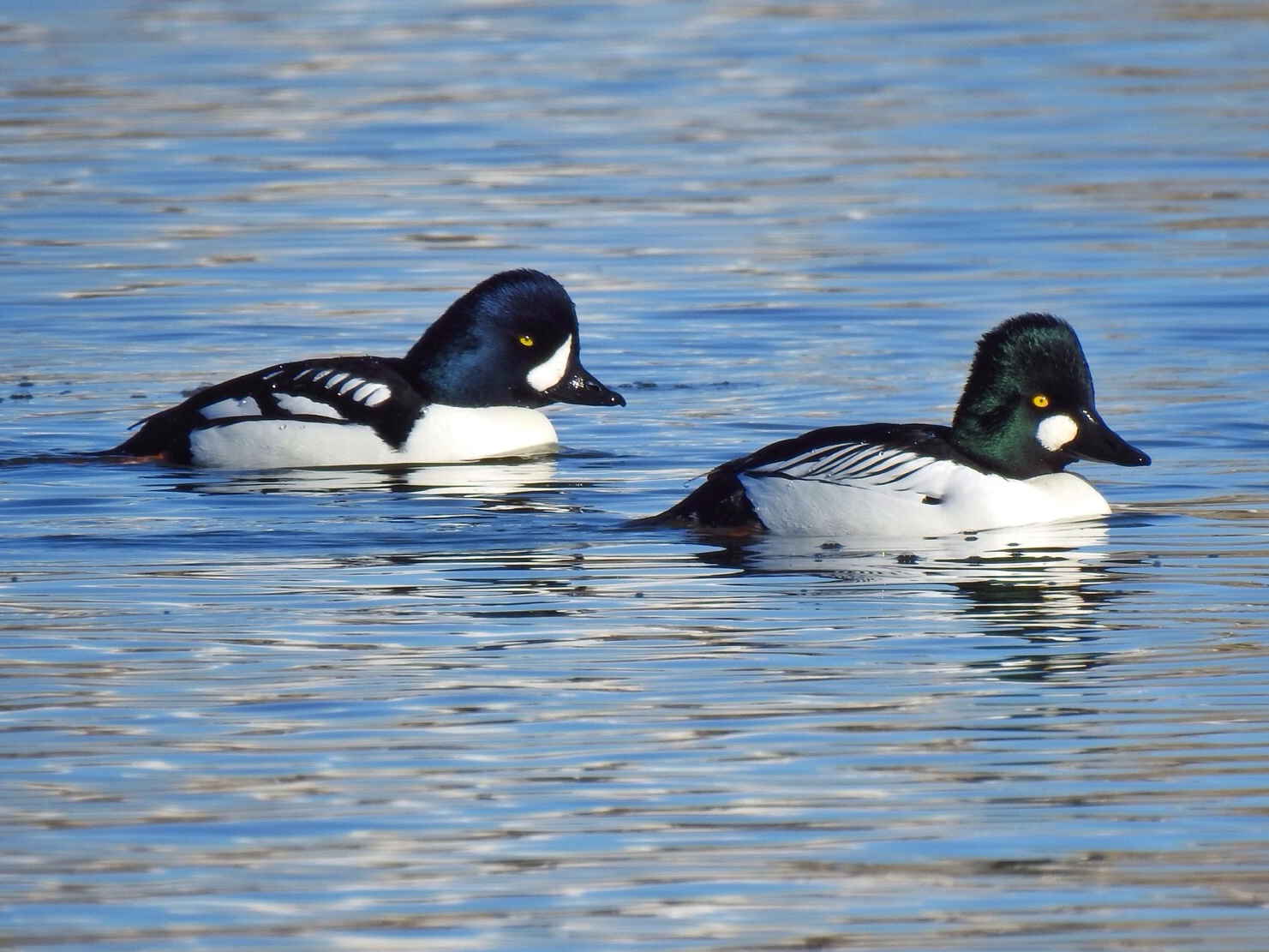 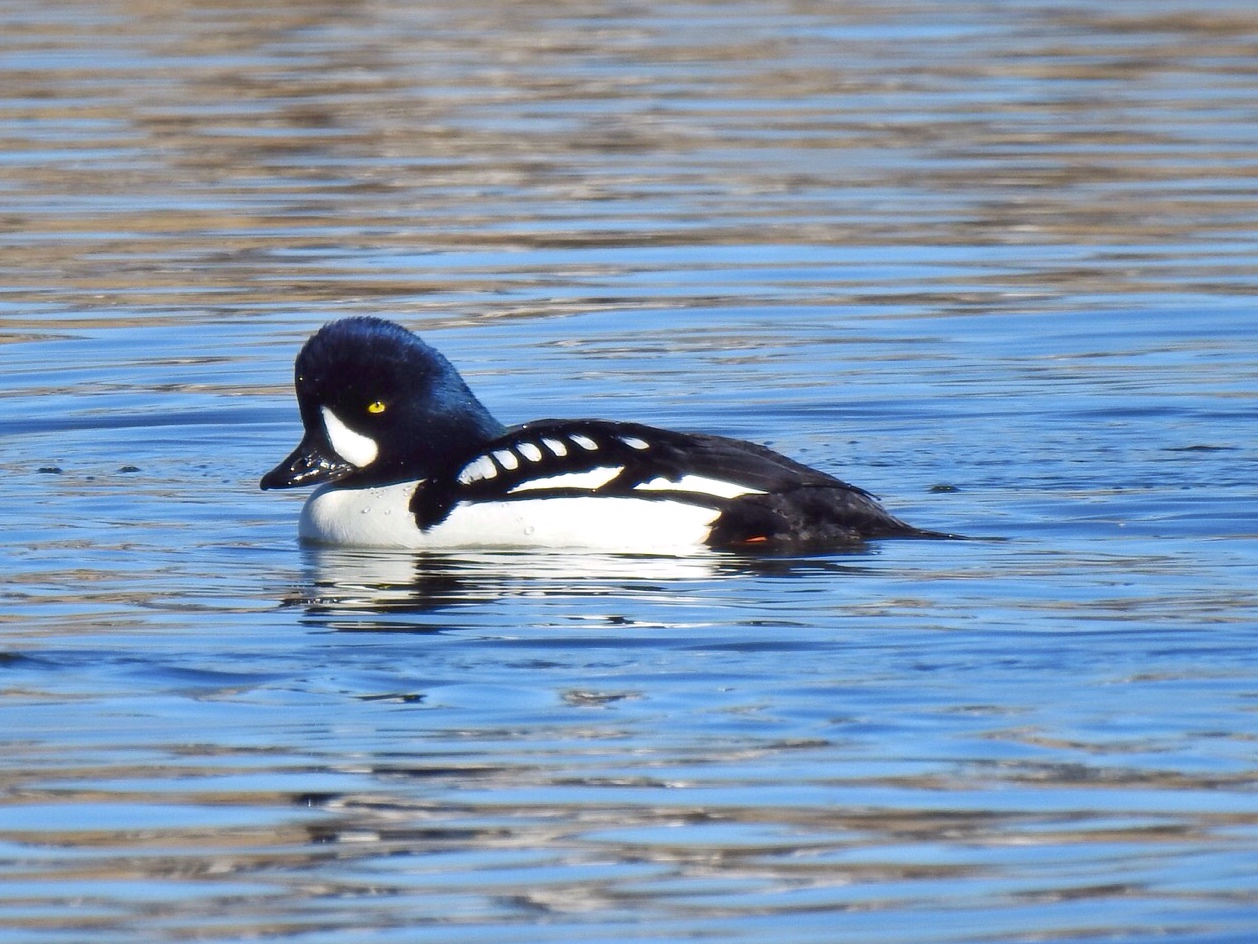 A pair of Redheads were drifting further out. They slept the entire time I was here. Here’s the male. The goldeneyes are in the background, with the Barrow’s in front. 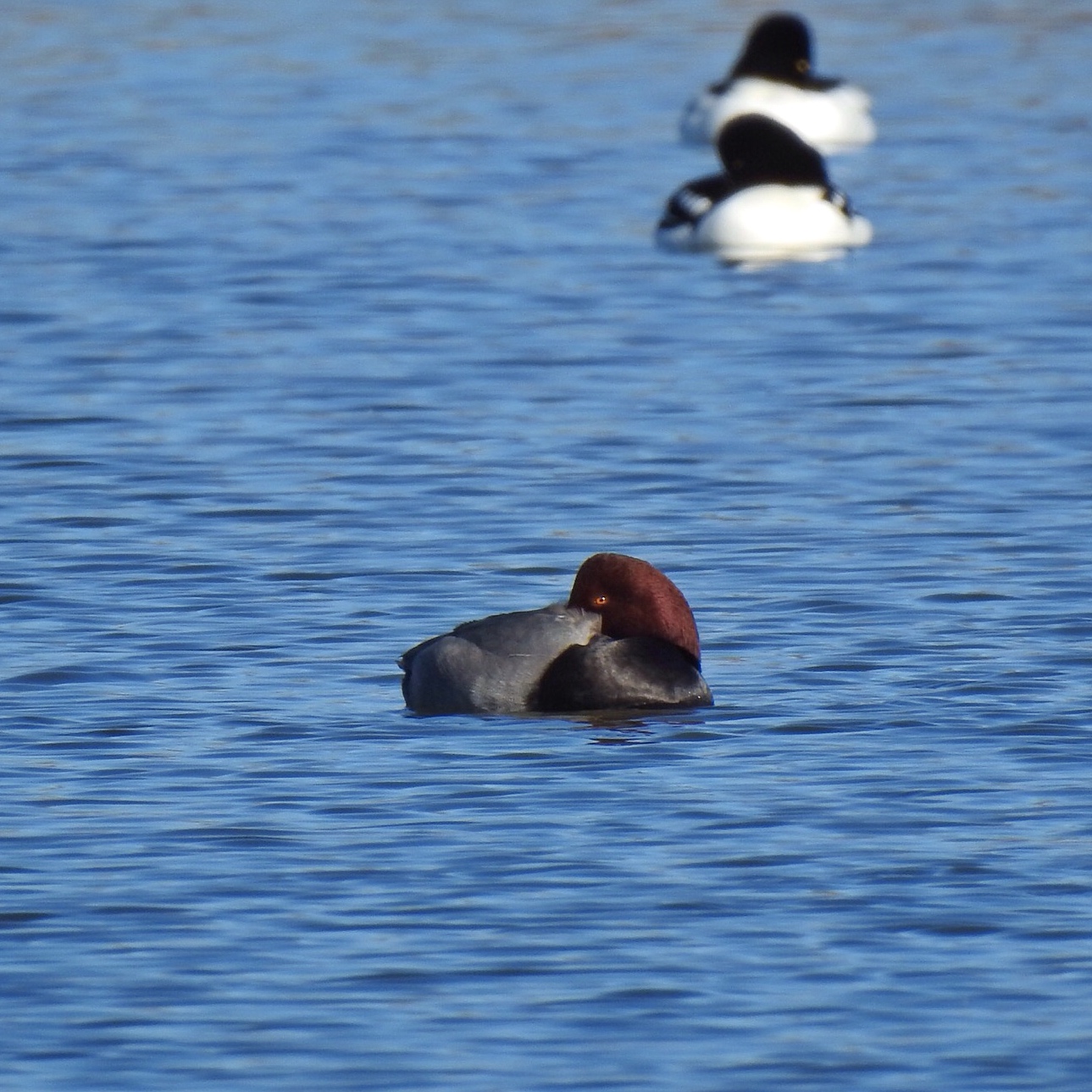 A small flock of scaup were also in the area. I spent a lot of time on them and finally found the female Greater Scaup that’s been reported hanging around with the Lesser Scaup for the past couple days. In this photo, it’s the brown female in the middle. You can tell from this angle that its bill is larger/thicker and its head is rounder, without that little peak/crest that can be seen on the back of three of the male Lessers. 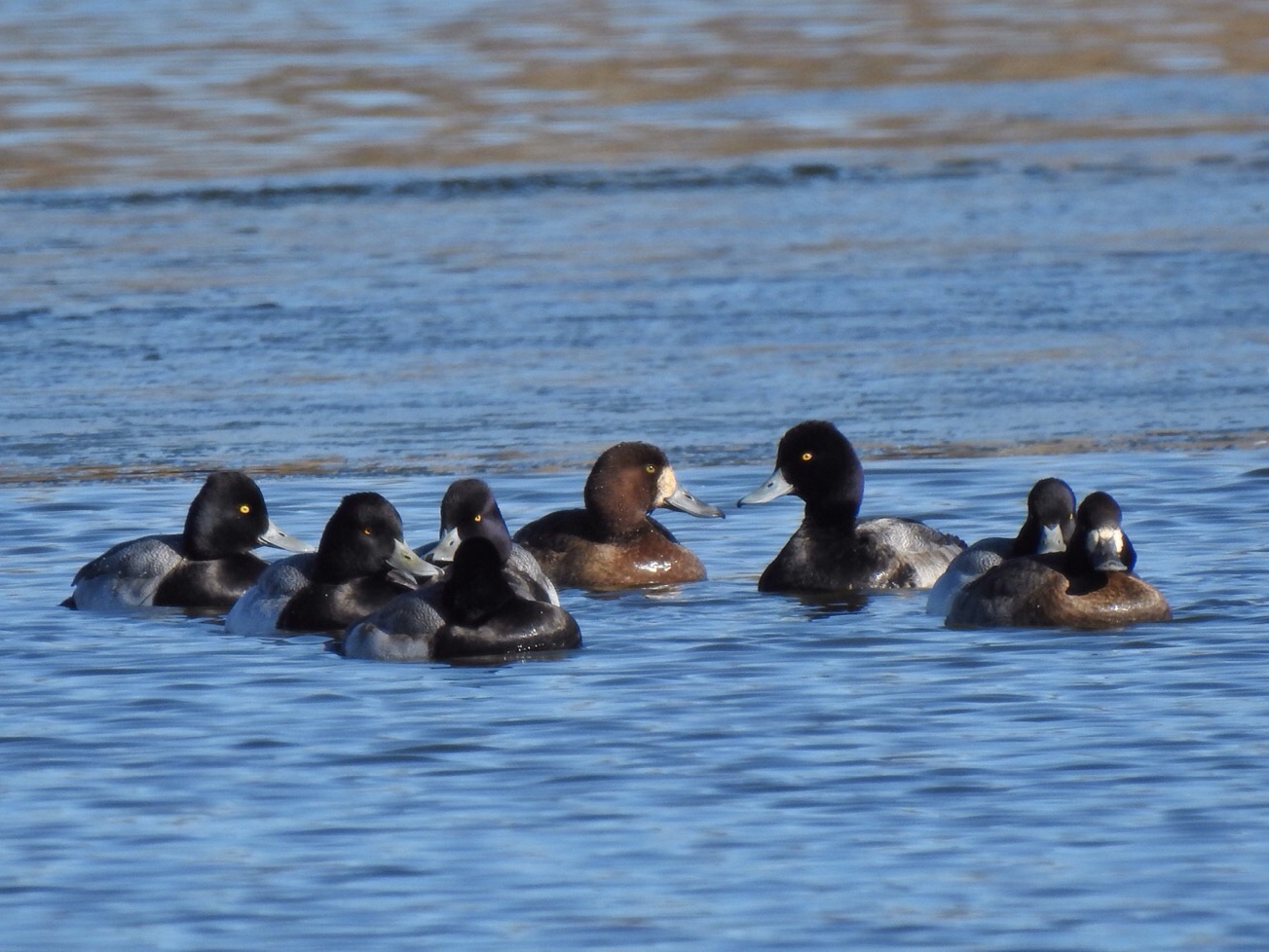 Here’s another shot of it swimming between two female Lesser Scaup. The Greater is simply bigger, a difference you can’t tell when the two species aren’t side by side, but obvious here. The Greater’s bill is wider and has a larger black “nail” on the tip. The Greater is also warmer brown than the Lessers here, but I don’t know if that’s a consistent field mark. 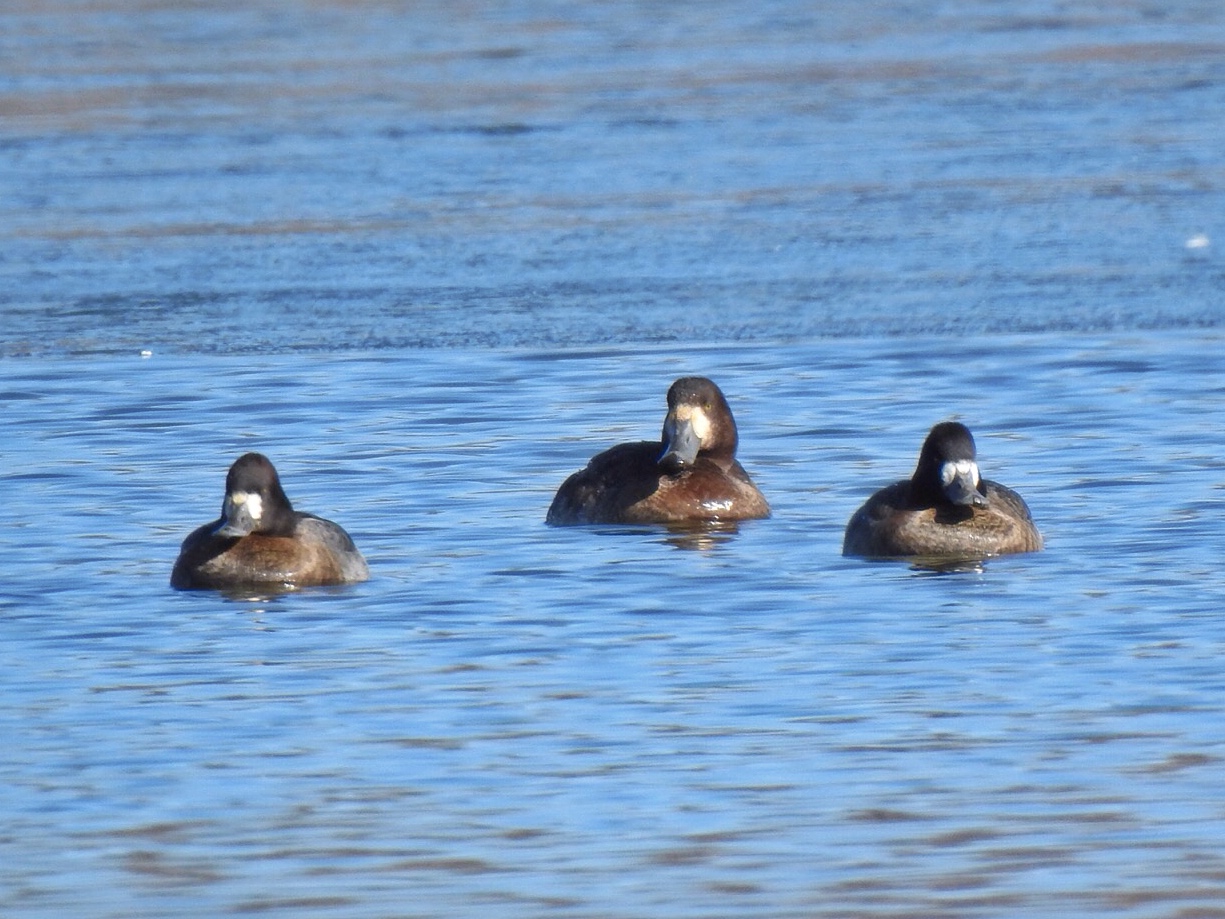 Another small patch of open water right along the shore was filled with geese, Mallards, American Wigeons, and American Coots. I waited until one of the coots climbed out on shore to get a photo of its feet. 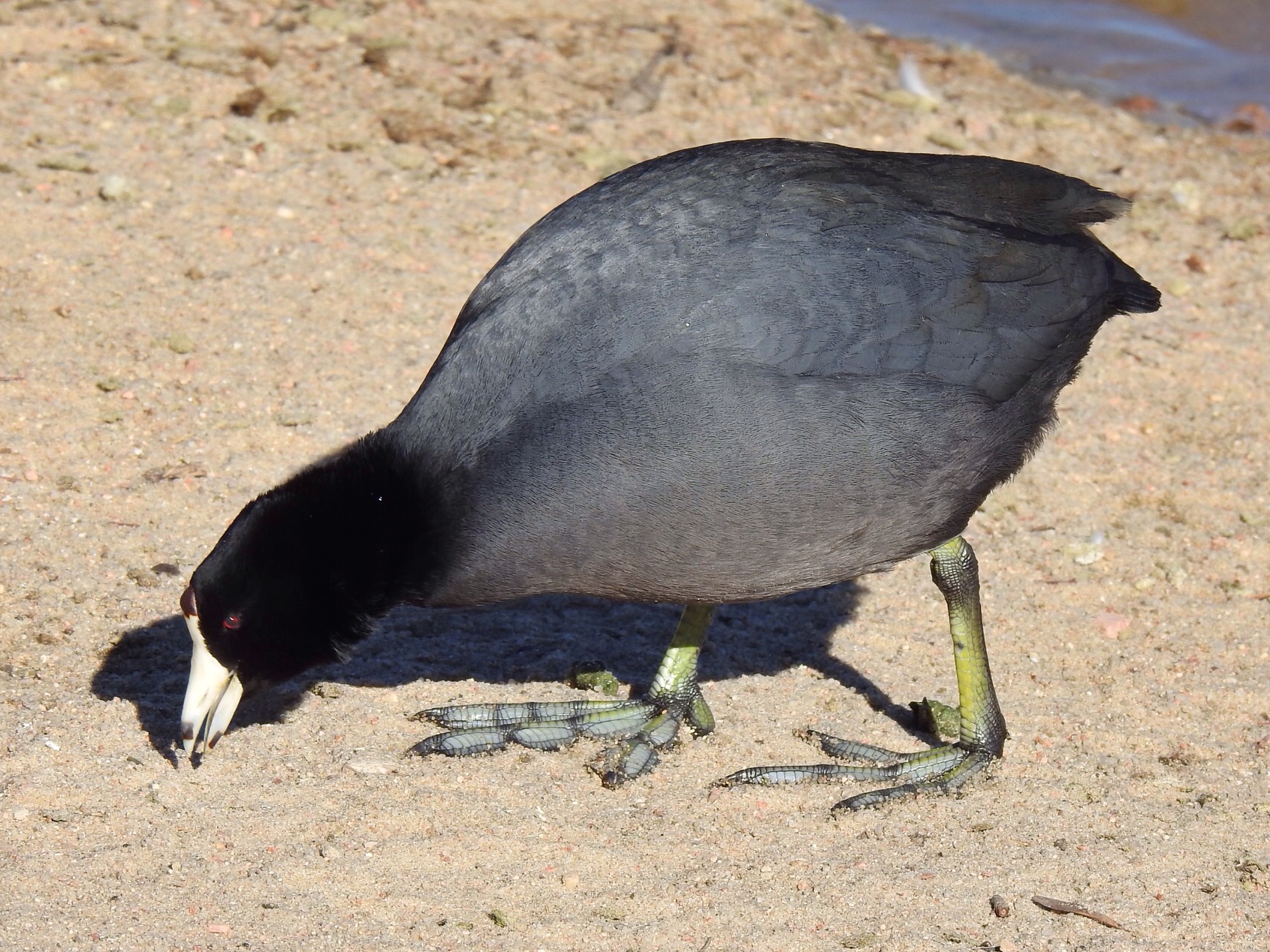 The first clip on the video shows the two species of goldeneyes swimming and diving with a female Common Goldeneye and a male Bufflehead. Please note that Let it Snow was playing on the Memorial Park carillon in the background. The next two clips show the scaups. See if you can pick out the Greater. The last clip is of a swimming coot.

Memorial Park is the largest body of water in Colorado Springs, so it’s the go-to place for ducks, geese, and birders. But it’s in a somewhat sketchy part of town. There are homeless people, panhandlers, and guys having lengthy conversations by the open trunks of their cars. I stay aware of my surroundings when I’m there, checking to see if anyone is approaching or finding me particularly interesting. I’ve never had any problems, although there have been a few times when I thought it wise to move along. I had no problems today either, but I did have something odd occur. I was writing down the birds I saw in my notebook. A scruffy looking man with a scruffy beard who was driving a scruffy car on the road next to the park rolled down his window and called, “Hey, quit writing those birds down.” From his tone of voice, I’m pretty sure he was intending to be humorous, but still it was an odd thing to call out to a stranger.

Postscript: I received an email from the local eBird monitor about the Greater Scaup. Usually when this happens, it’s a request for me to provide more information on a rare bird—field notes, a description, an explanation of how I eliminated the possibility that the bird in question wasn’t a similar-looking species. Not this time. The monitor emailed me just to say, “Great shot of the Greater Scaup. I thought it was a really good photograph.”