We drove by Mount Rushmore on Tuesday evening on our way from the Badlands to Custer State Park and I took a couple photos from the road through our bug-splattered windshield. Roosevelt and Lincoln seem particularly chummy from this angle. 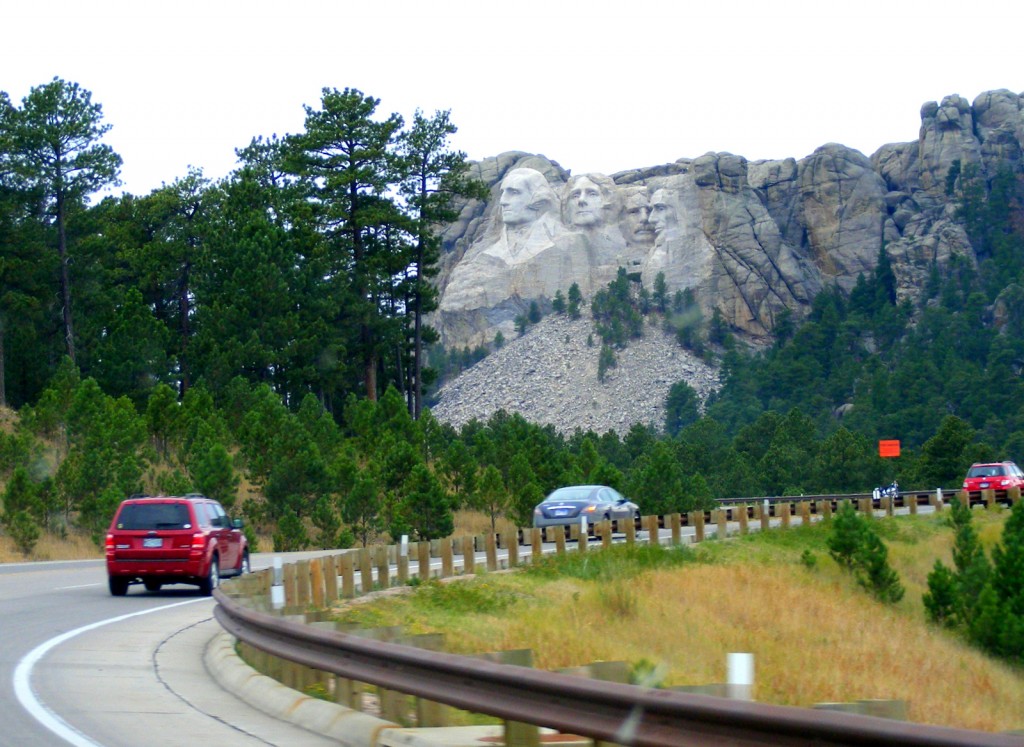 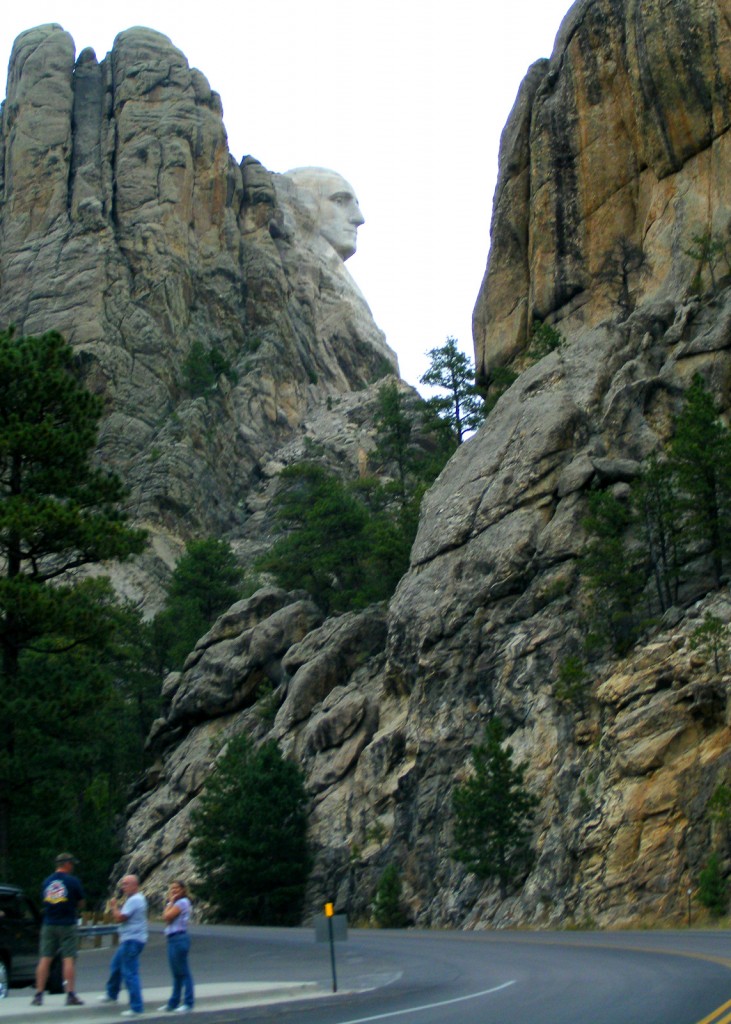 We decided we wanted to see it in the daytime and also watch the lighting ceremony at night — but we only wanted to go there once. Our solution, of course, was to drive the 17 or so miles from our lodge late in the afternoon and stick around. This was a good plan except that we picked the one day when it was cloudy. It even rained a little off and on. This made it a poor day for taking photos, but I soldiered on. 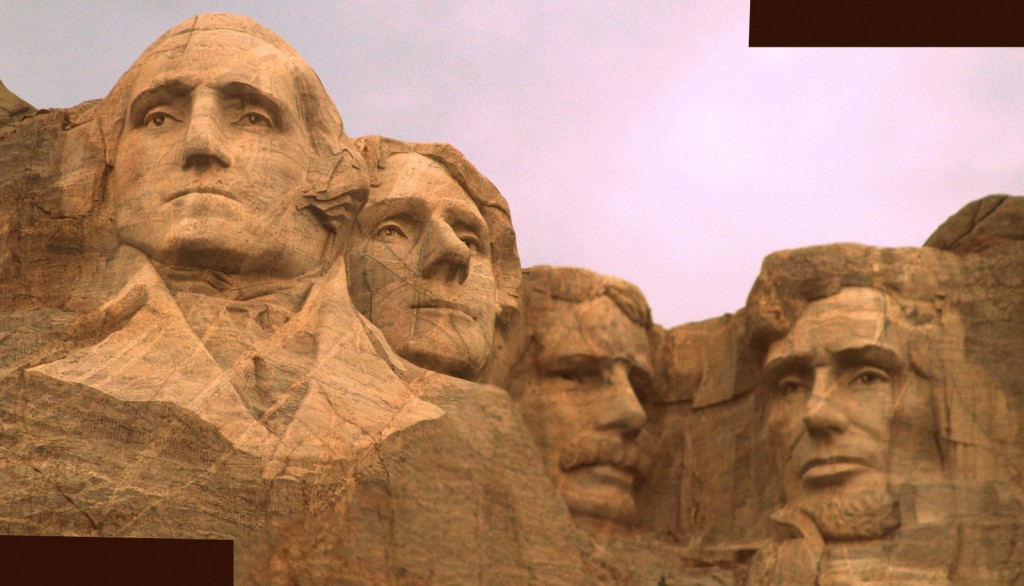 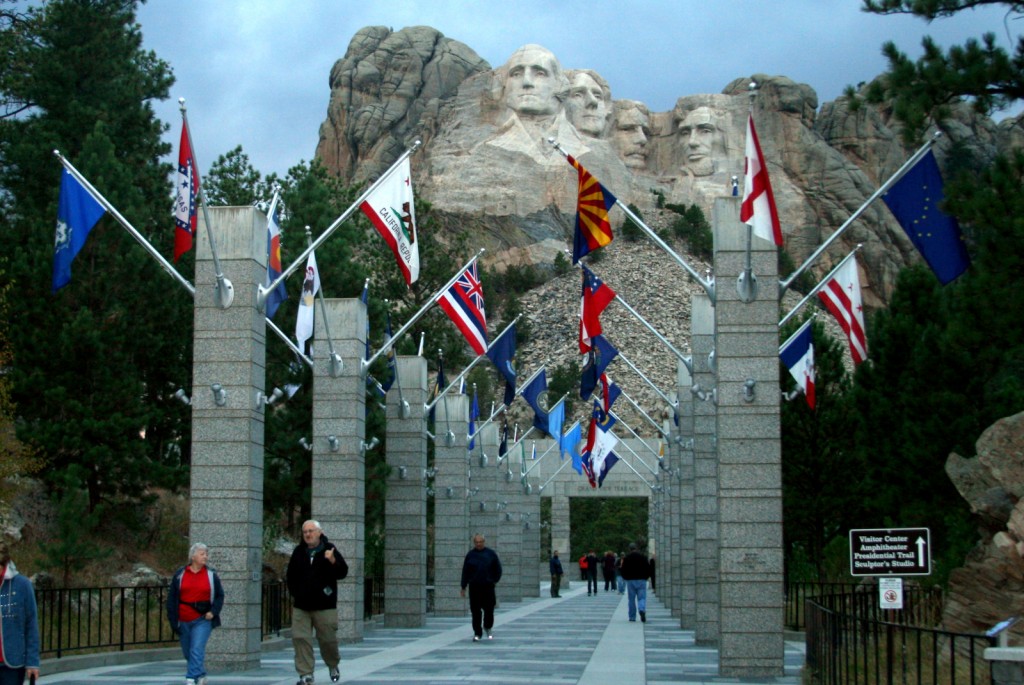 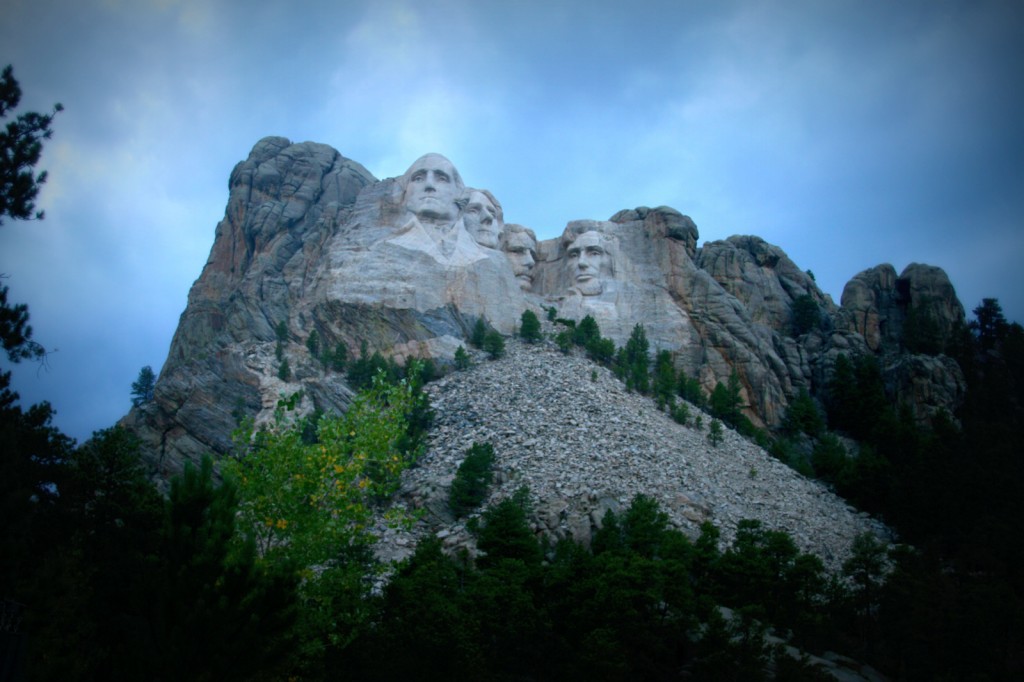 I left the Red Chair in the car while we scouted the place. This was stupid. We’d no sooner walked the half mile from the $11 parking garage to the overlook than I realized I’d better get my photo soon before it got too dark. I walked back while my wife wandered through the visitor center. 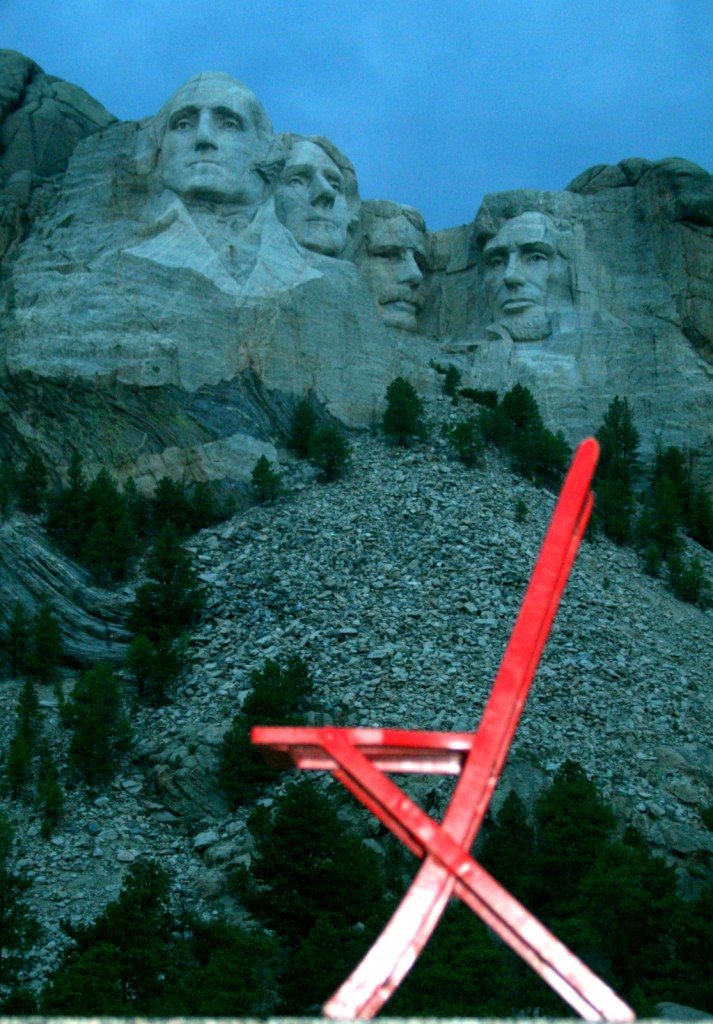 When I finally got back to the viewing area, I put the chair on the wall and looked for my best shot. A couple was standing nearby, waiting for the elevator to the lower level. The guy asked me what I was doing, but didn’t seem that interested when I told him. He told me he thought I was putting the chair on the wall so I could sit and watch the show.

As I walked back to the car to put the chair away, I tried several other shots, none of which turned out. For one, I put the chair in the middle of the main walkway and laid down on my stomach for a photo. I saw a couple guys looking at me, but didn’t think much of it. But then they began walking toward me rather deliberately. As I headed for the garage, they followed. I paused to look for one more shot and to find out what they were up to. One of the guys approached and asked me what I was doing with the chair. When I told him, he seemed disappointed too. From what he said, I got the impression he thought I was up to something that might make him famous.

I wandered back without the chair and toured the visitor center while my wife watched the film. We made a quick trip back to the restaurant for ice cream, then found seats in the arena and waited for the show. It was 42 degrees out, and raining. We were wearing light jackets. Several people made comments as they walked past, but we didn’t care. It had been a hot summer and two days earlier it had been near 100 in Wall. We enjoyed being cold for a change. 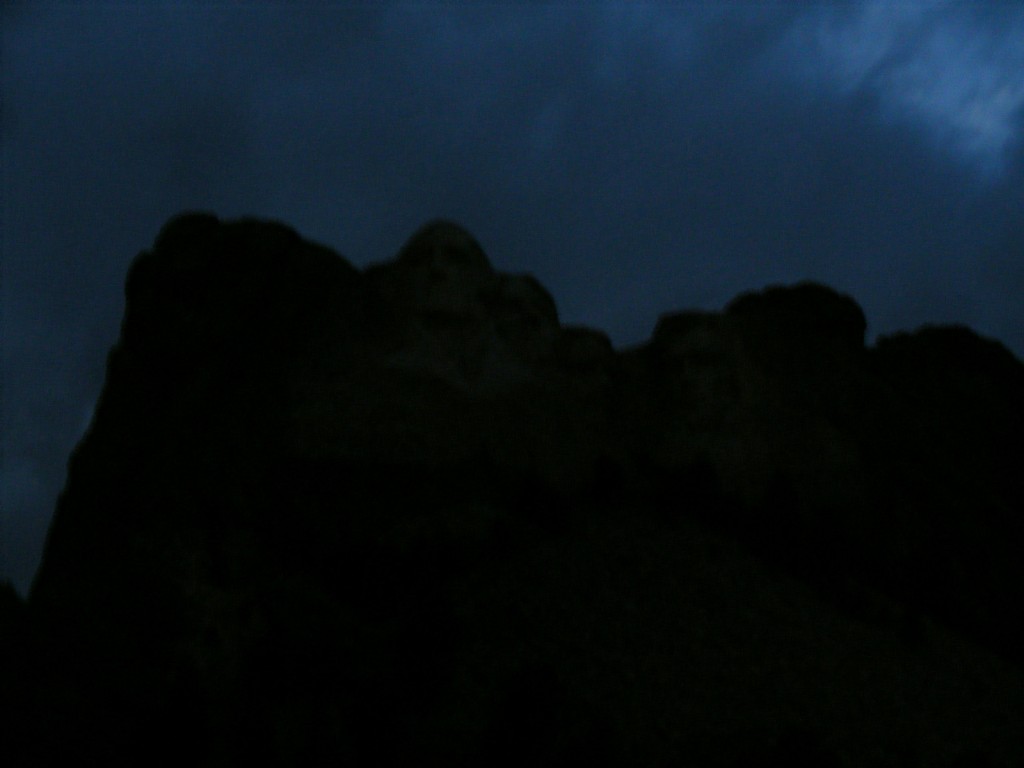 The show began at 9:00. A ranger came out on the stage and gave us a Presidential trivia quiz about the four men carved into the mountain. We then saw a video that made no impression on me whatsoever. The ranger, who was from Virginia, gave a talk on how wonderful Thomas Jefferson was, then had all the veterans in the audience come down to the stage. While she walked along the line asking each their name and branch of the armed forces, the lights came on and lit up the carving. 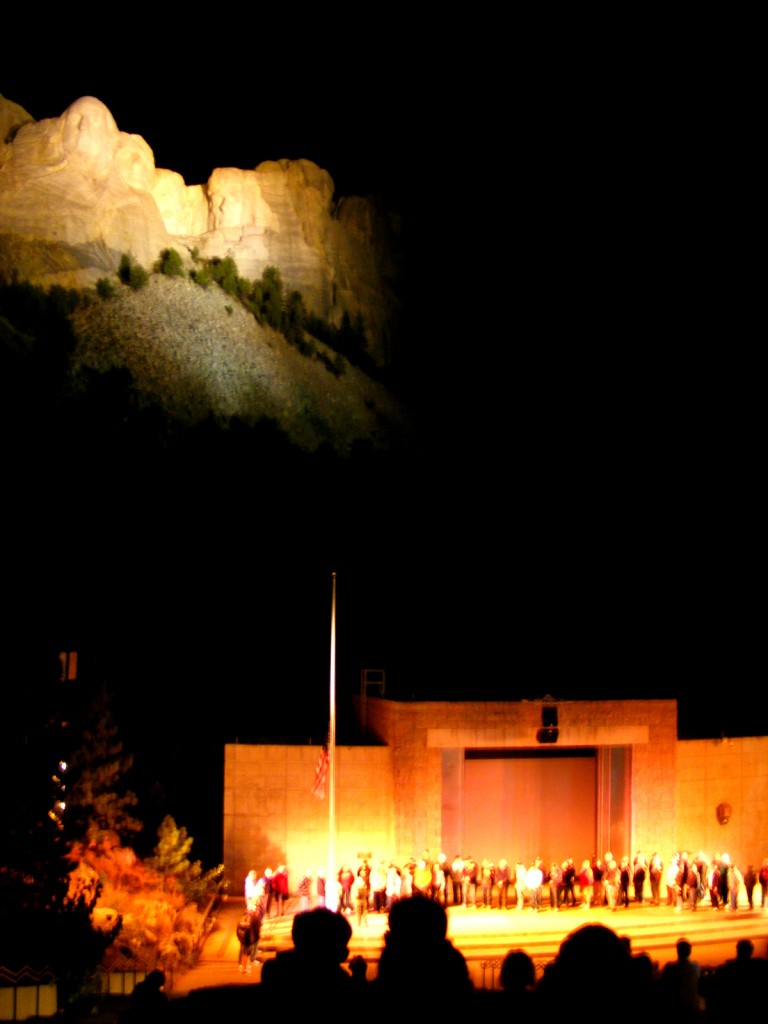 We sang the “Star Spangled Banner,” and then several of the veterans joined the ranger in a flag-lowering ceremony. 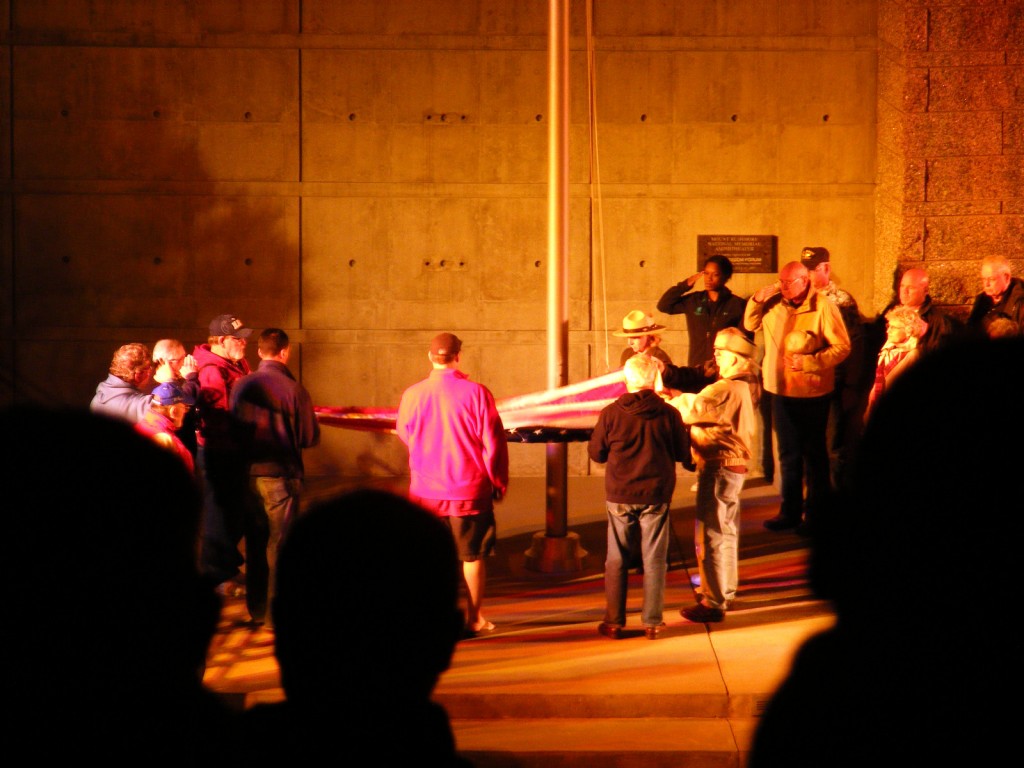 It was all supposed to be very moving, and it was in a way. But I couldn’t help reflecting that the government that mentioned God several times and “our Creator” once during the ceremony is very antagonistic about any mention of God in most other instances. And the government that had this moving ceremony honoring the men and women who fought for our freedoms just mandated that I have to buy health insurance. I could go on.

On our way back to the lodge, we had to take a narrow, winding road. The sky was overcast and the night was pitch black. Because the road was so twisting, our headlights only occasionally shone on the road in front of our car. I found myself hesitating to allow the lights a chance to catch up with us. Suddenly I saw something white flash up ahead. At the same time, my wife said, “What was that?”

I slowed to a near-stop and put on my high-beams. On one side of the car, a brown and white cow was standing just a few feet off the pavement. That’s what she saw. On my side of the car, a jet black cow with a white patch on its face was standing on the pavement in the oncoming lane. That’s what I saw. I’m not used to meeting free-range cows in the night. It was somewhat startling and I drove even slower the rest of the way.