Not a Western Screech-Owl

A Western Screech-Owl, a would-be lifer, was discovered hanging out in a cottonwood tree in southern El Paso County, at a regional park called Clear Springs Ranch. It was first seen on the last Sunday in January, but by the time I’d heard about it, the work week had begun. I had to wait patiently for five agonizing days as reports and photos kept showing up on my computer.

Finally, Saturday came along. I knew screech-owls like to perch in the sun on winter days, so I decided to go to Fountain Creek first—until the sun got warm. I spent about two hours there, seeing all the usual suspects. The highlight was a Sharp-shinned Hawk that scattered all the little birds by the feeders in front of the visitor center. It landed in a small evergreen and scanned for prey, paying no attention to me taking photos 20 feet away. 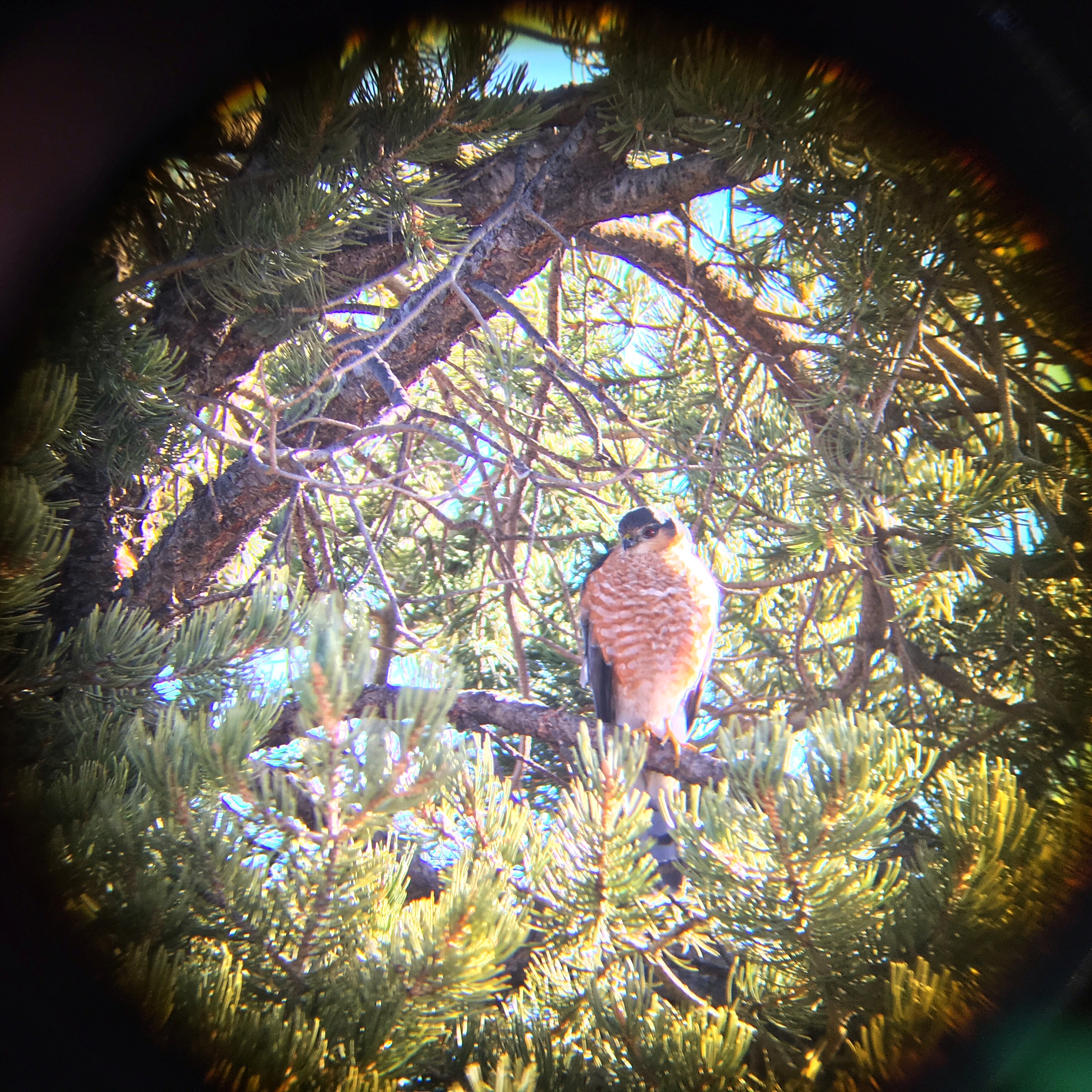 Around 10:00, I left Fountain Creek. As I was pulling out of the drive, I noticed that the sky to the south and west was dark gray. I grabbed some food at Culver’s, then headed for Clear Springs Ranch.  I’d never been there before and didn’t know what to expect. It’s located at exit 123 along with almost nothing else. The exit sign is empty except for the numbers. At the bottom of the ramp, I had two options—continue straight to get back on the interstate or turn left and pass under the highway through a one-way tunnel. (“Honk your horn before entering.”) The rutted dirt road skirted a horse farm and headed east. I had no idea what I would find, but at the end of the drive there was a large parking lot, a picnic shelter, and an outhouse. Two other cars were parked in the lot.

As I got out of my car, I noticed that the blue skies and warm weather had entirely disappeared. I knew this considerably lessened my chances of seeing the owl, but since I was there … I had a close-up photo of the owl in the hole where it was being seen. 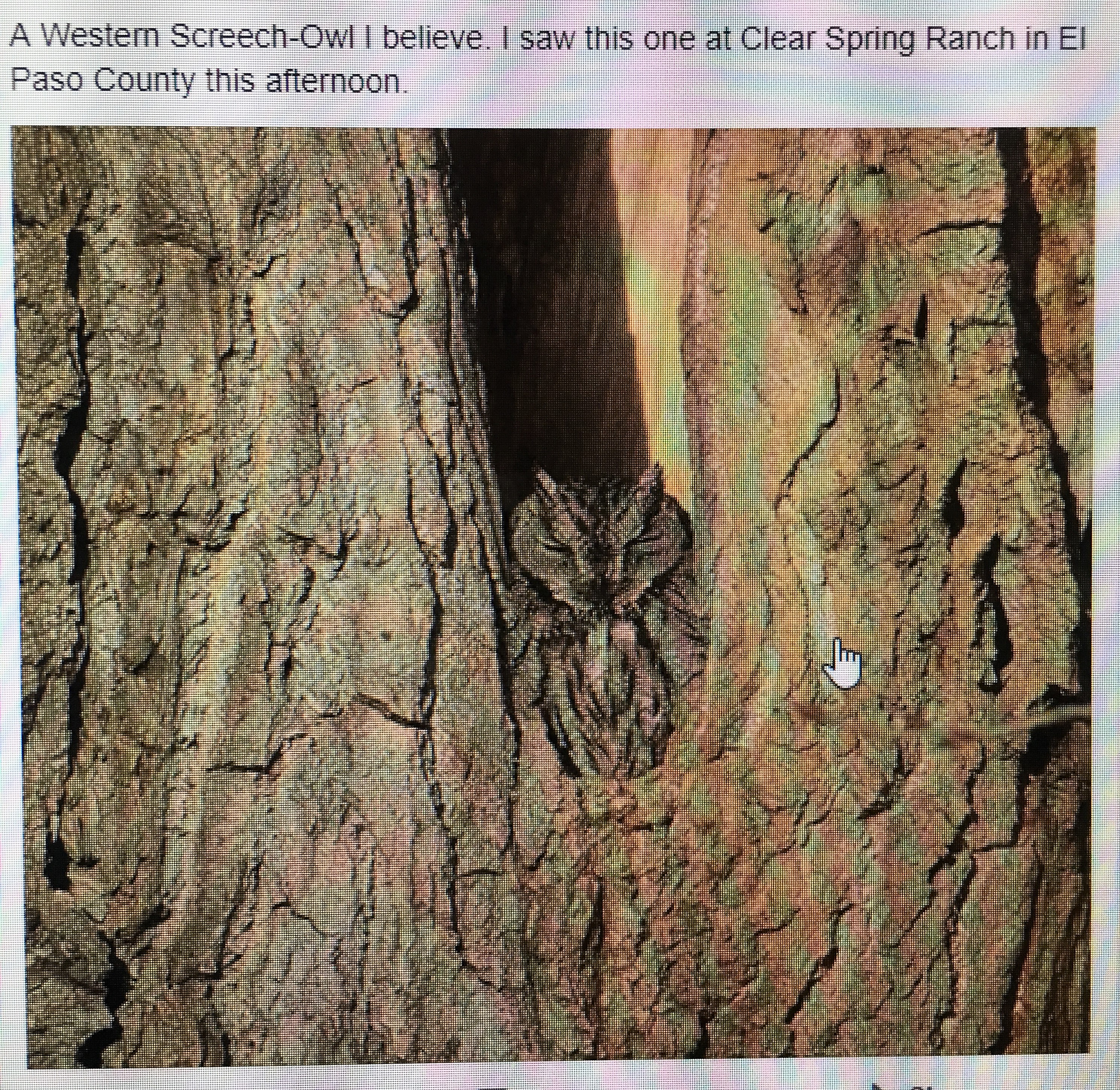 Further directions weren’t given because the birding community doesn’t like to give out the location of owls because then too many people go to see them and they, supposedly, get stressed. My strategy was to walk slowly and look at every cottonwood until I found that hole. I quickly realized this was a poor strategy. There were a lot of cottonwoods. A very lot of cottonwoods. Another car pulled into the lot and two birders got out. They were walking the path behind me so I slowed my pace and allowed them to catch up.

I asked if they knew where the owl was being seen. They did. The husband had seen it the day before and was bringing his wife to show her. I fell into step alongside them, and we discussed our chances. They weren’t good. The weather had turned decidedly murky. Miserable even. With the overcast skies and the wind and the dropping temperatures and a higher-than-usual humidity, it felt like a Chicago winter. After a walk of about half a miles, the guy showed us the tree. That was the spot, but no owl. 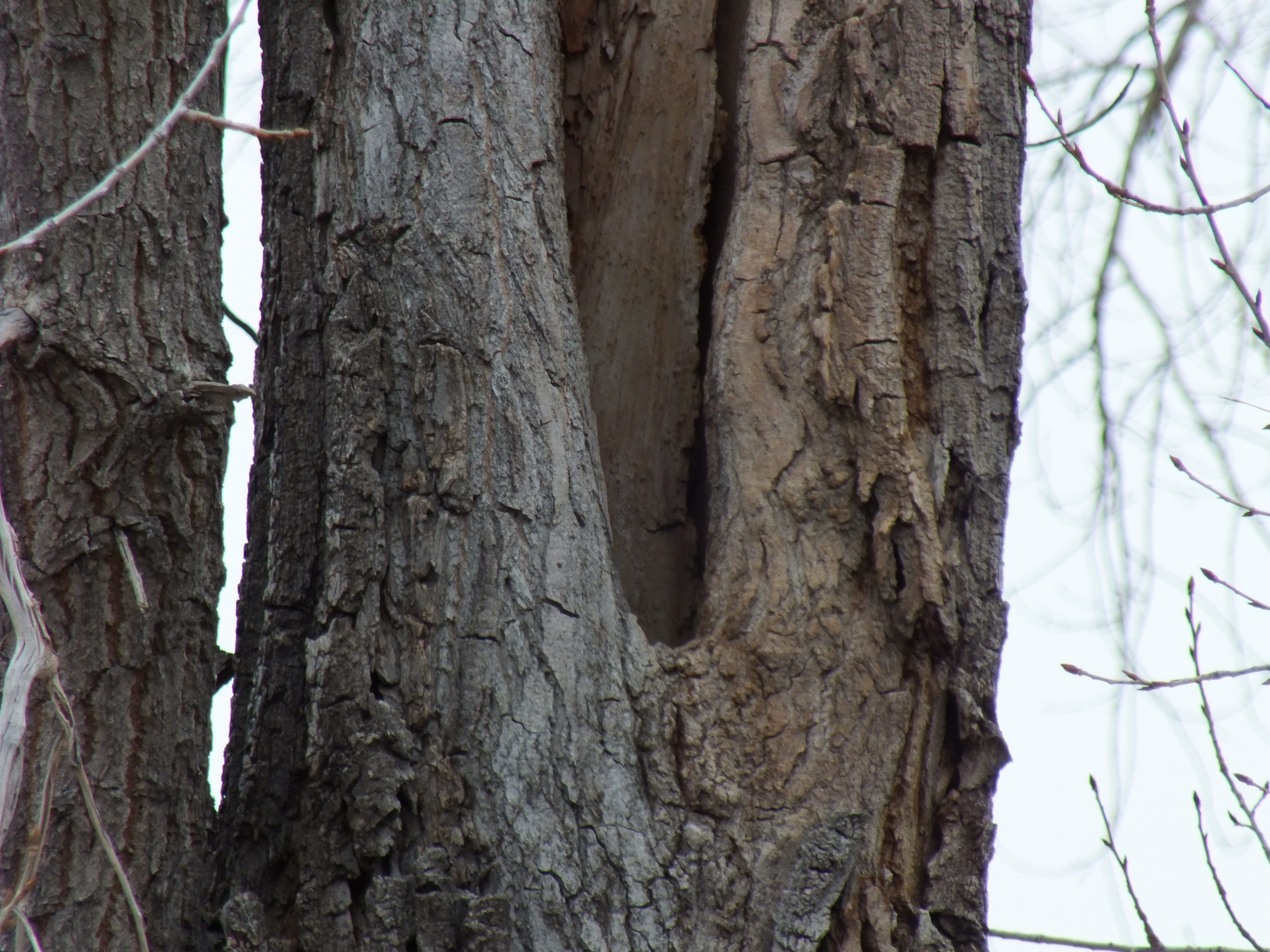 The introduced themselves and wished me luck and left. I walked the trails for another hour, just to see what the place was like. It was like cold and windy.

Monday was a sunny, warm day and the owl was back on its perch. I could see on eBird that the couple I’d met on Saturday had seen it. I was happy for them. Kinda.

I have days off to use, and at this point a good chance at a lifer is a worthwhile expenditure. The forecast for Tuesday was partly cloudy and warm. It looked and felt like Saturday—gray and windy with some snow in the air. I seriously considered turning around. But way in the south I could see a belt of clear sky, and weather systems move fast out here. The forecast was still calling for sun by mid-morning.

I had Clear Springs to myself. It’s a typical western river, with cottonwoods lining the banks and the hills of the eastern Colorado prairies visible just beyond. 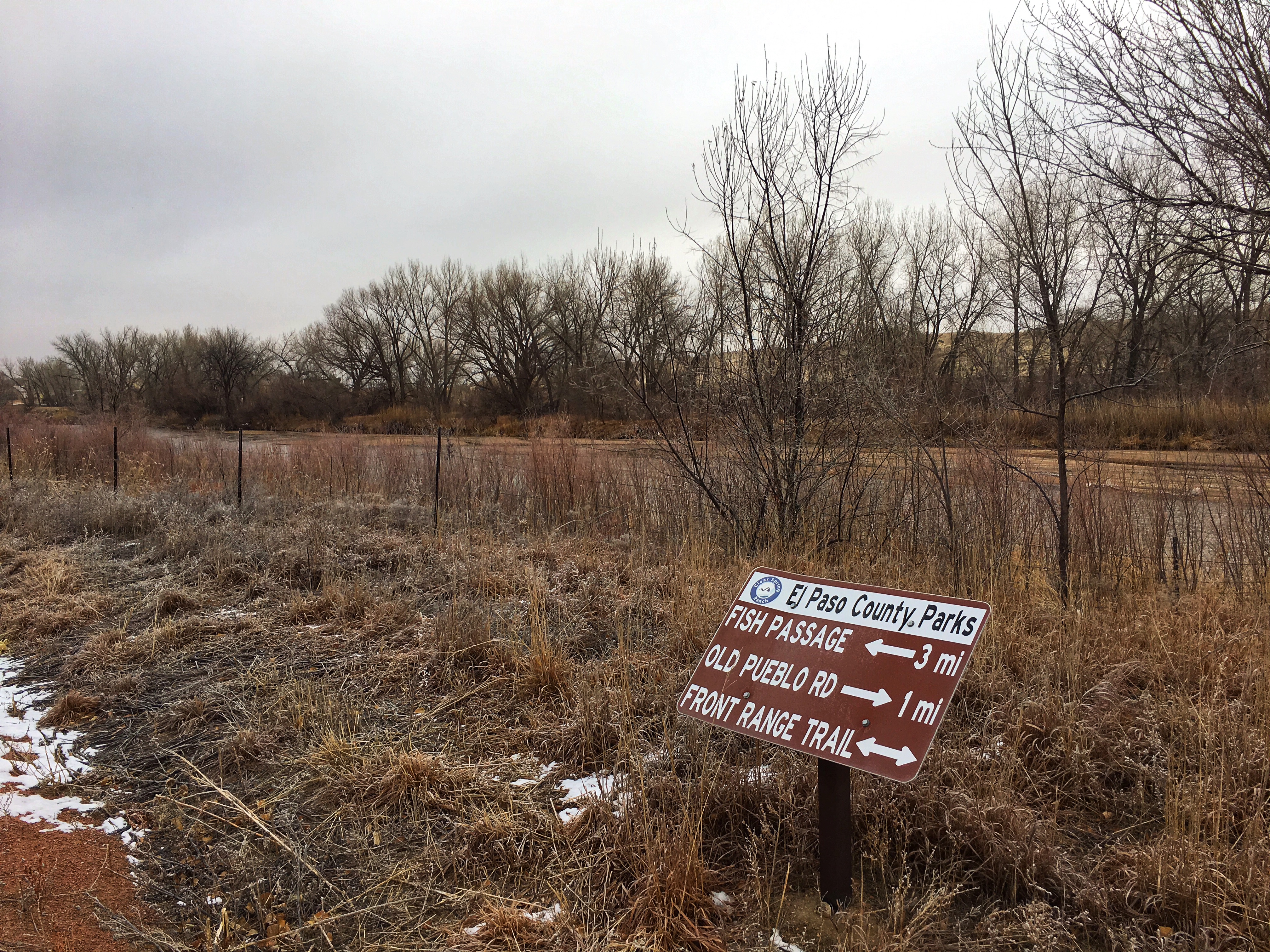 There was quite a bit of frost on everything. Except for the section between the parking lot and where the owl had been seen, the paths were covered snow with no human footprints. 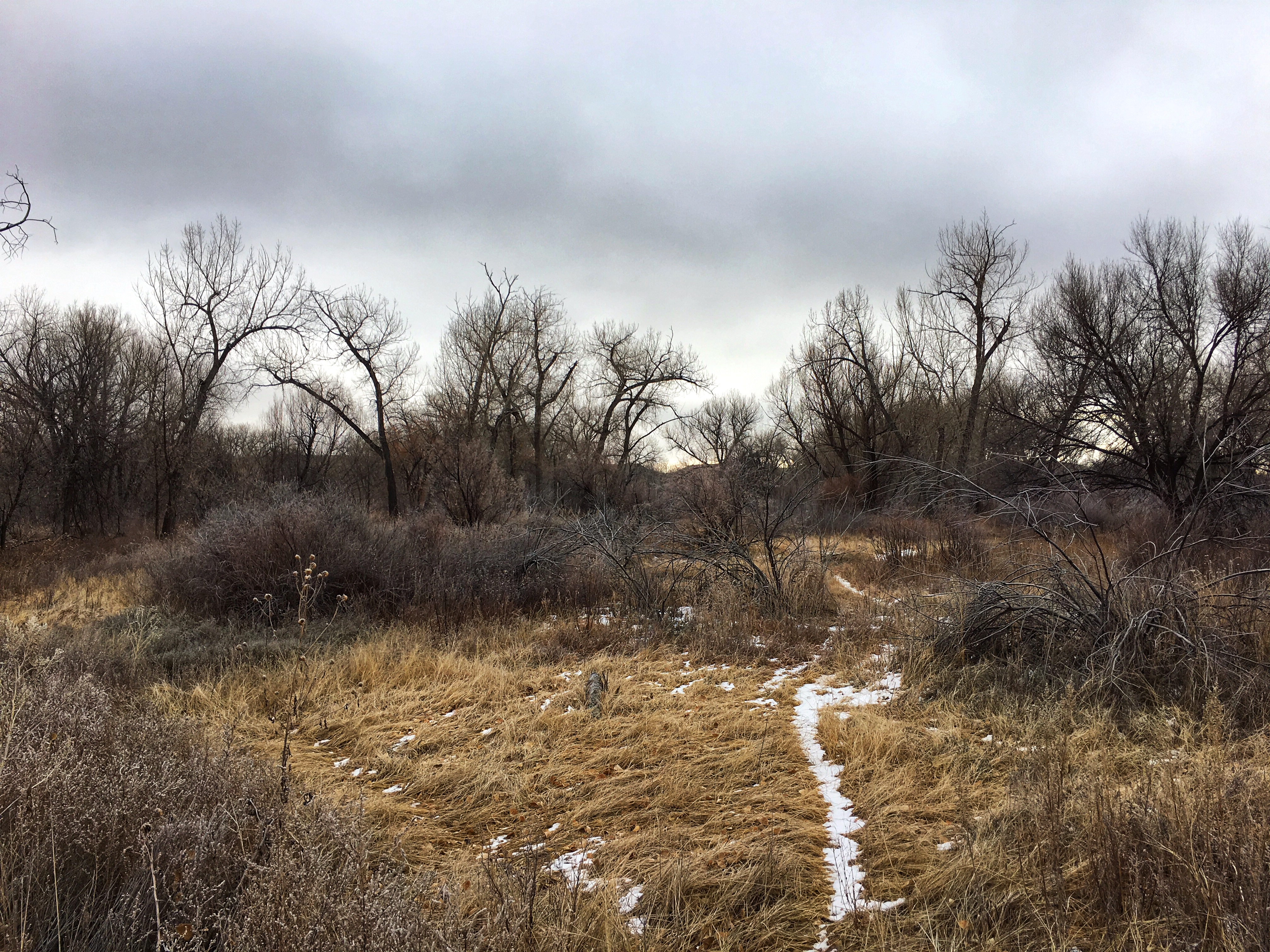 I say human, because there were lots of other footprints. I had a good time observing them and trying to figure out what had happened. For example, at this point, a deer had decided to change directions, perhaps because of the mouse that ran across the path in front of it, or maybe even because of me, although I hadn’t seen it. 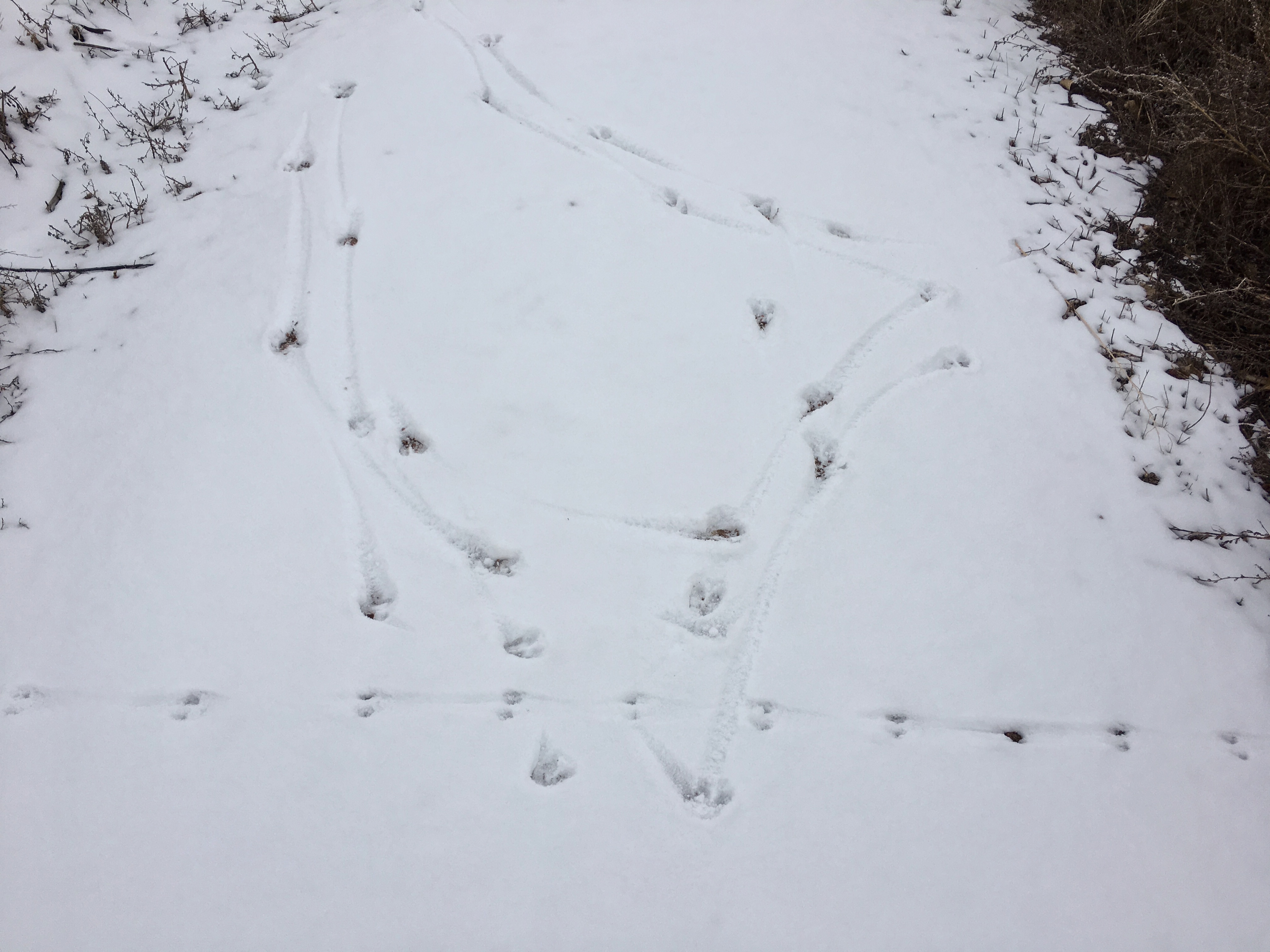 This spot, however, had me stumped. I should have figured it out, but I didn’t. 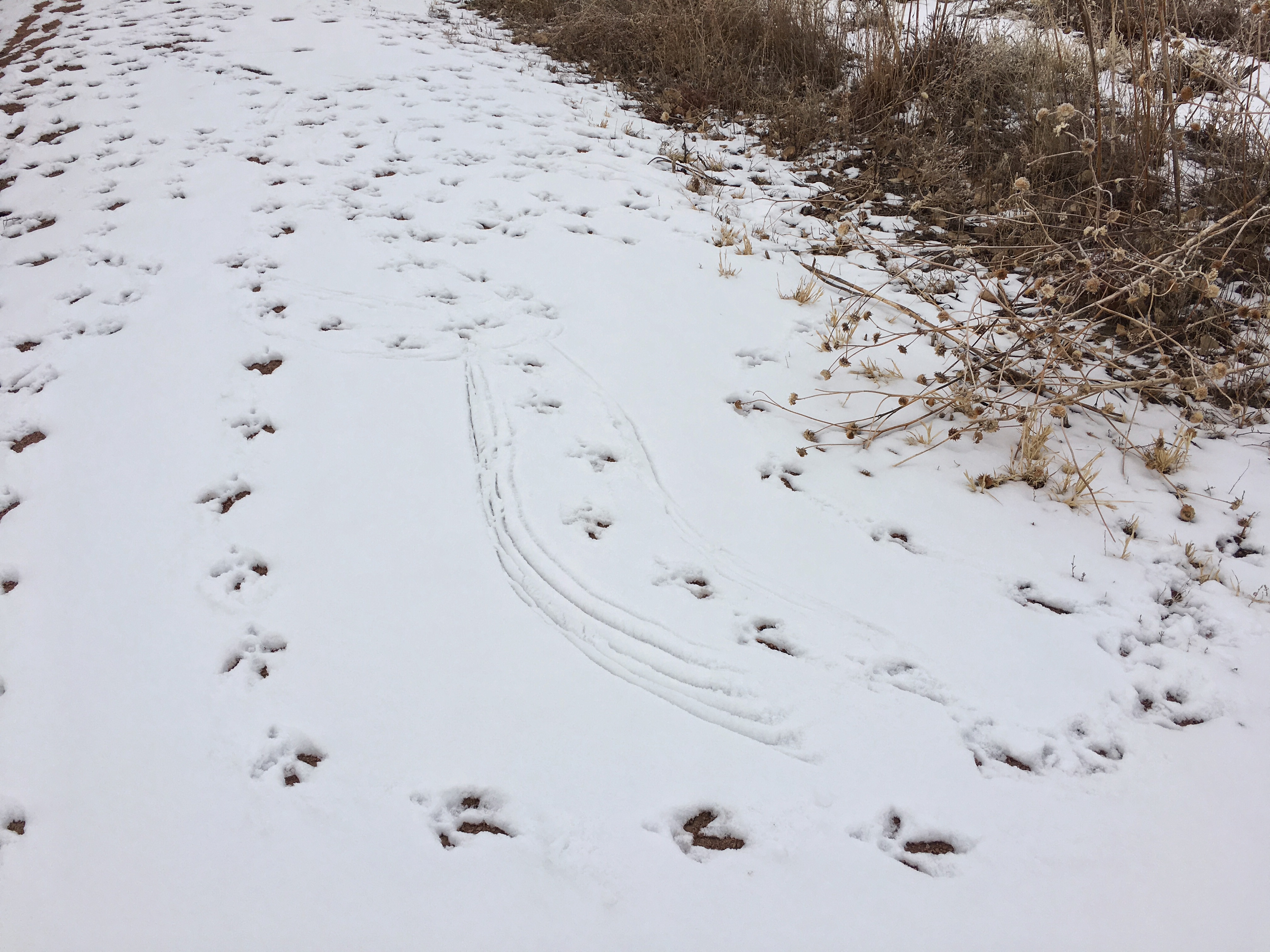 At least I didn’t until I’d walked on a little further and saw this. 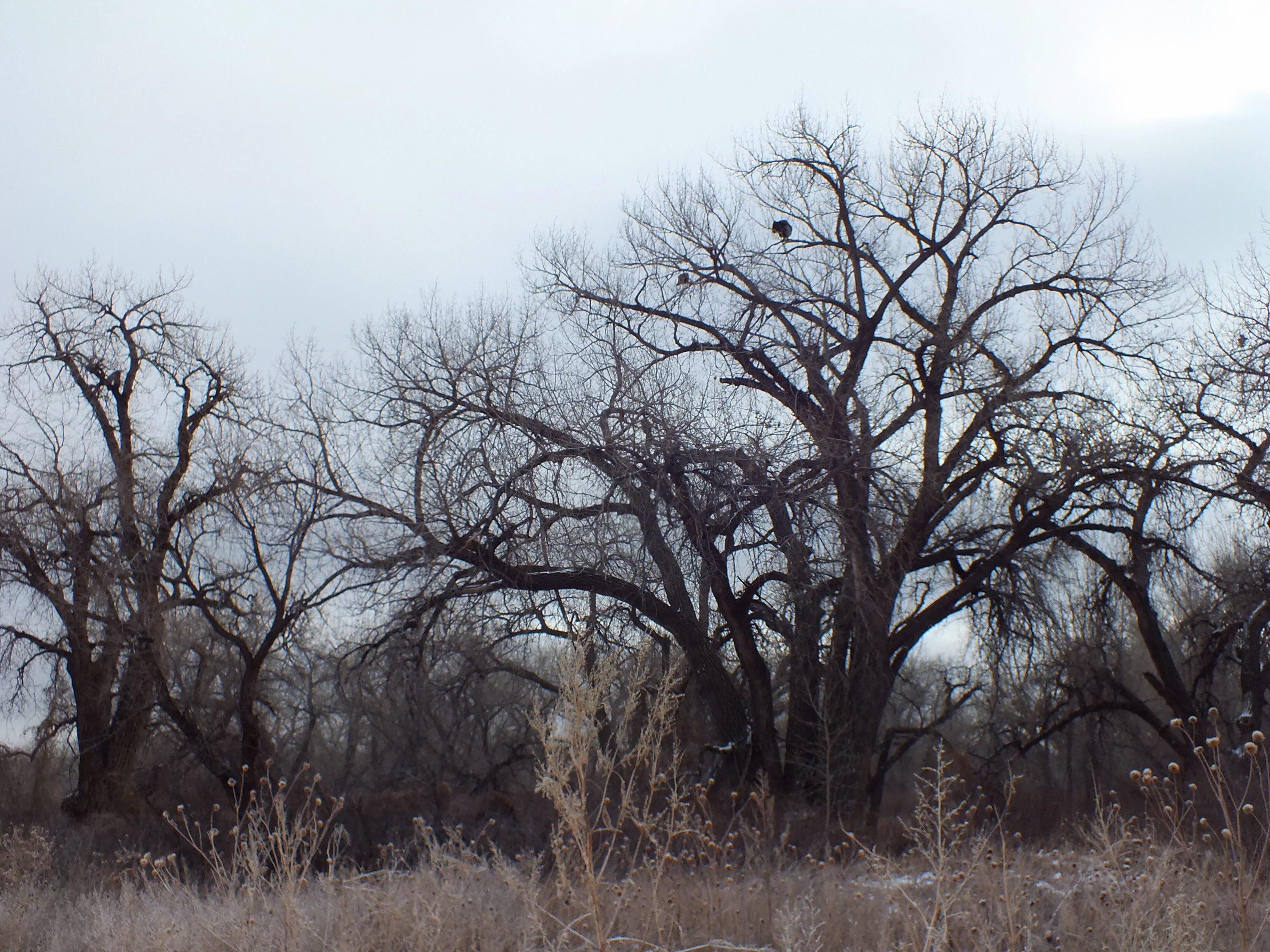 Two Wild Turkeys high up in a tree. 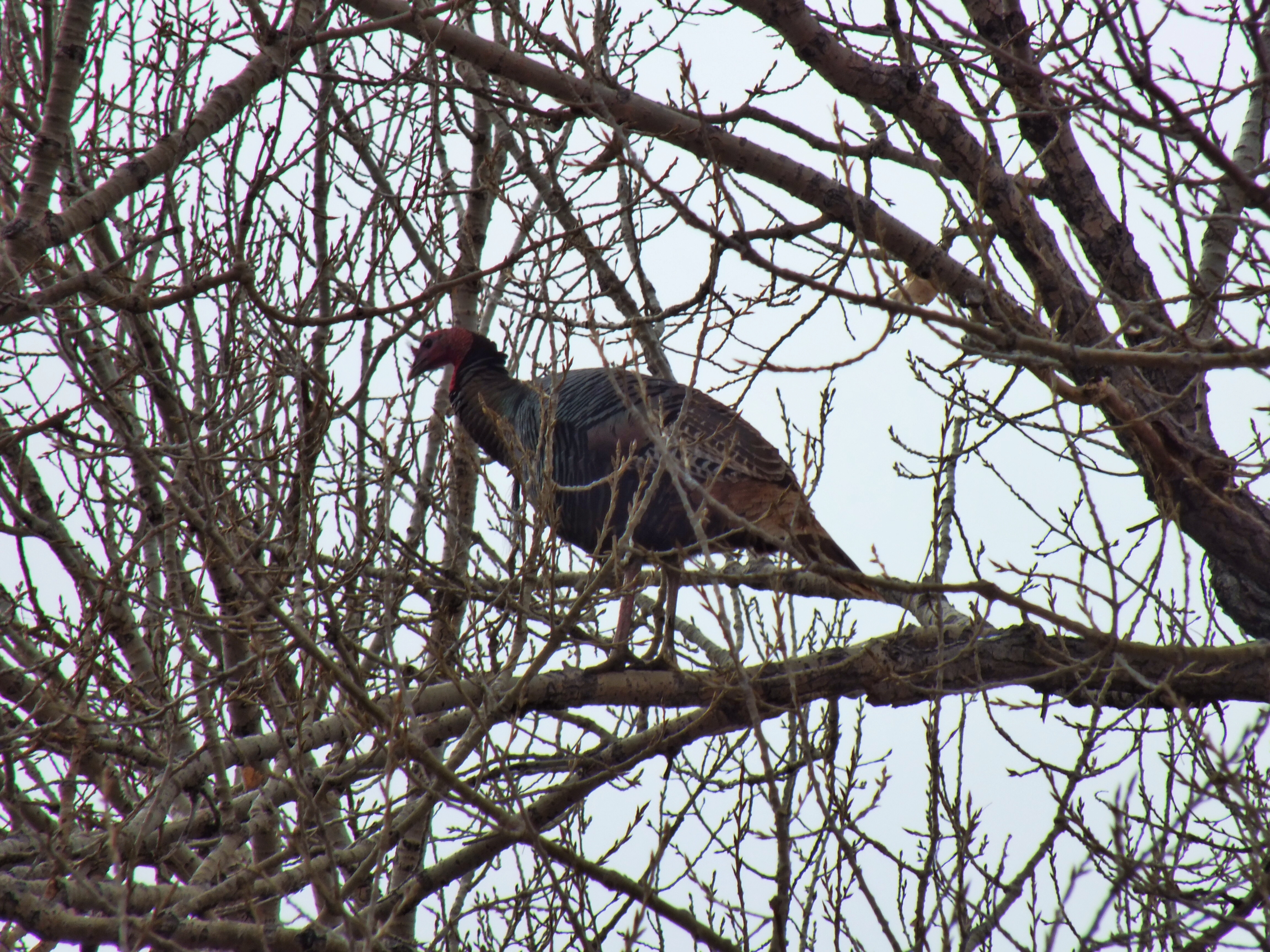 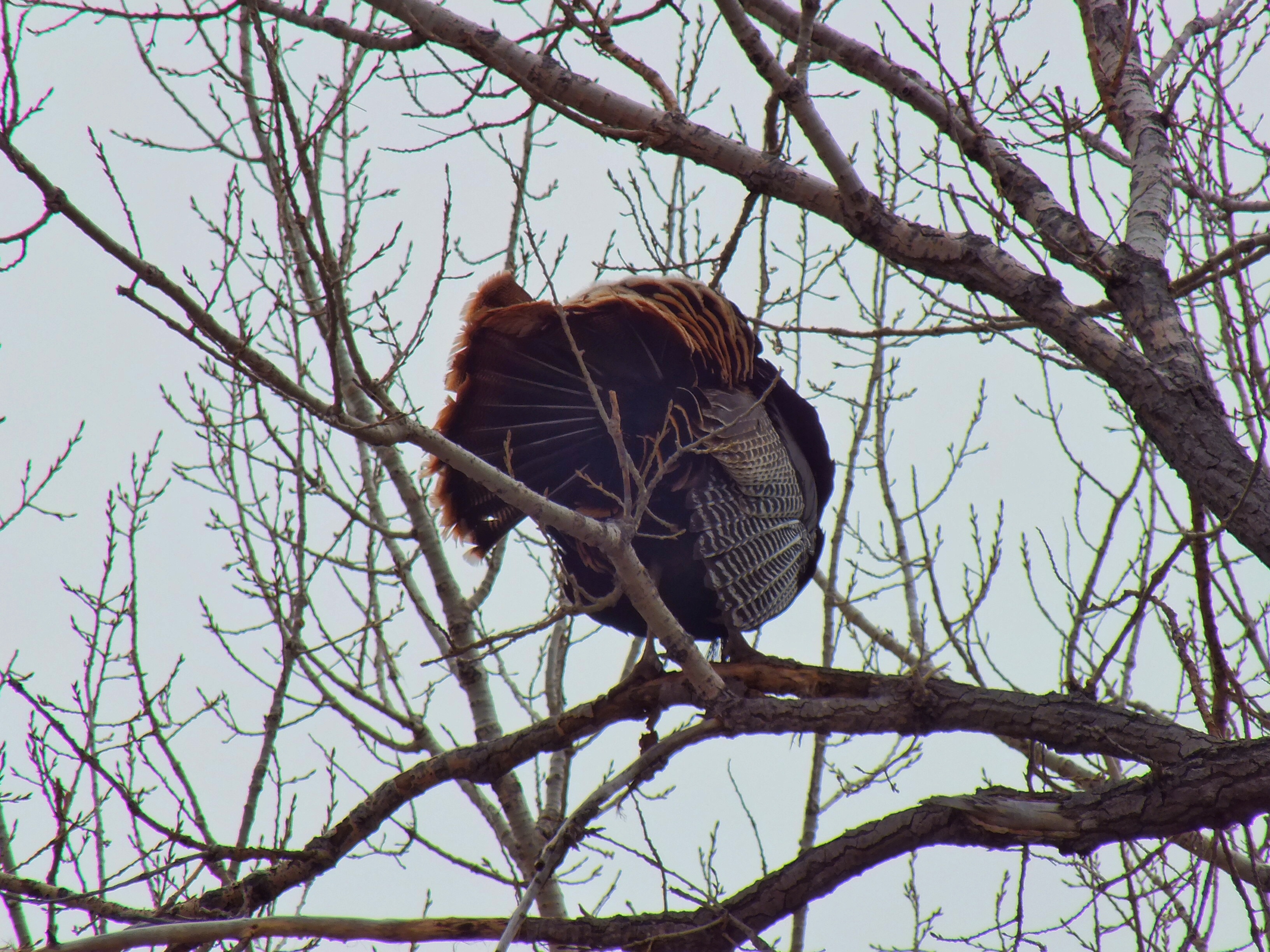 The tracks, I’m sure, had been made by them, and if the tom was displaying like he was in the tree, that explains the streaks made by a wing. I tried to move around to get better light without flushing them, but it didn’t work. 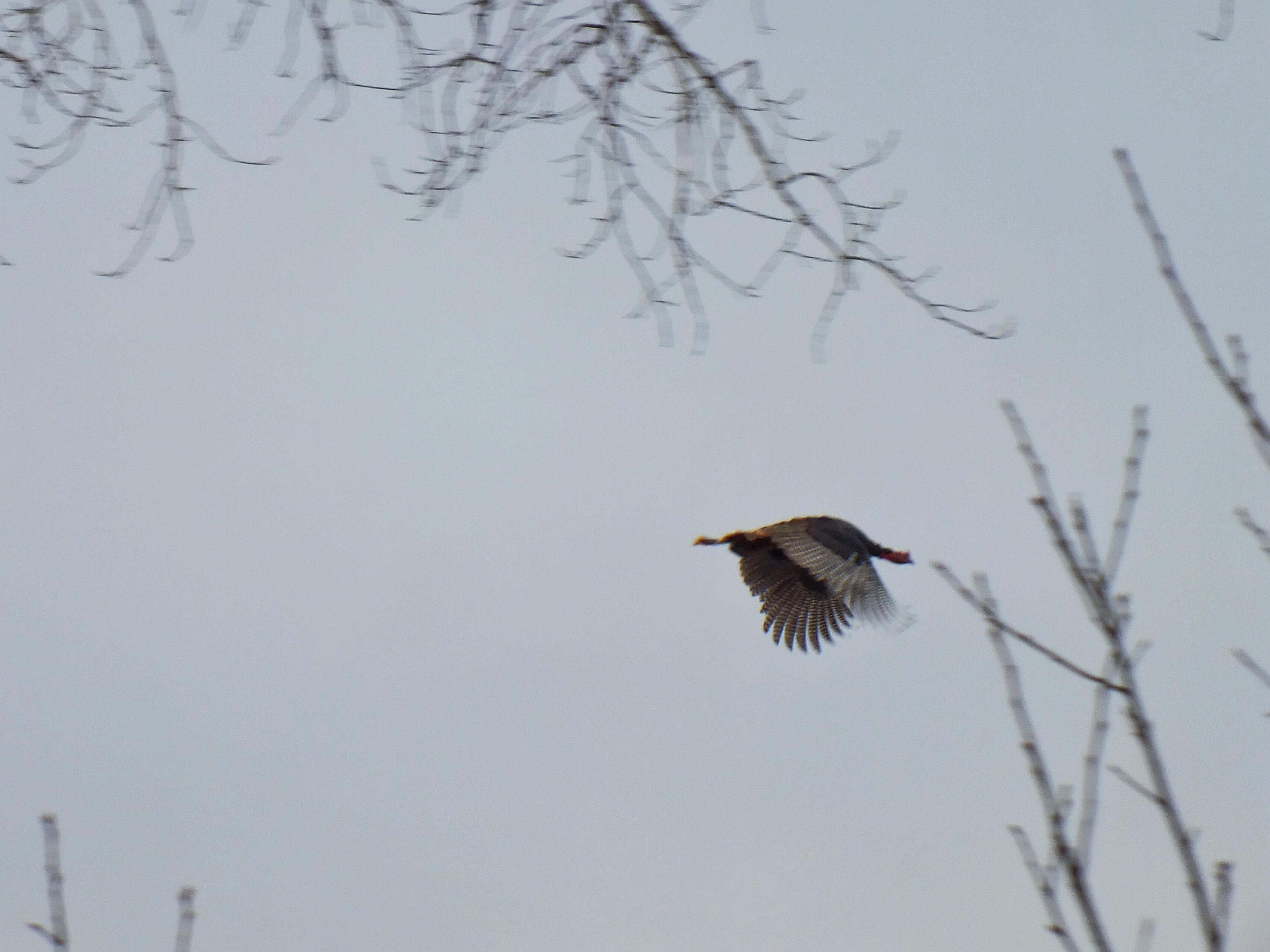 I could see that the sun was trying to poke through, but it wasn’t in a hurry. I walked back toward the owl tree. Along the way I saw a small flock of Eastern Bluebirds, my first for Colorado, and a smattering of other things. But there was still no owl. I hung out in the immediate area for another hour. The sun did break through and it got much warmer, but I decided it wasn’t worth an entire day, so I left. 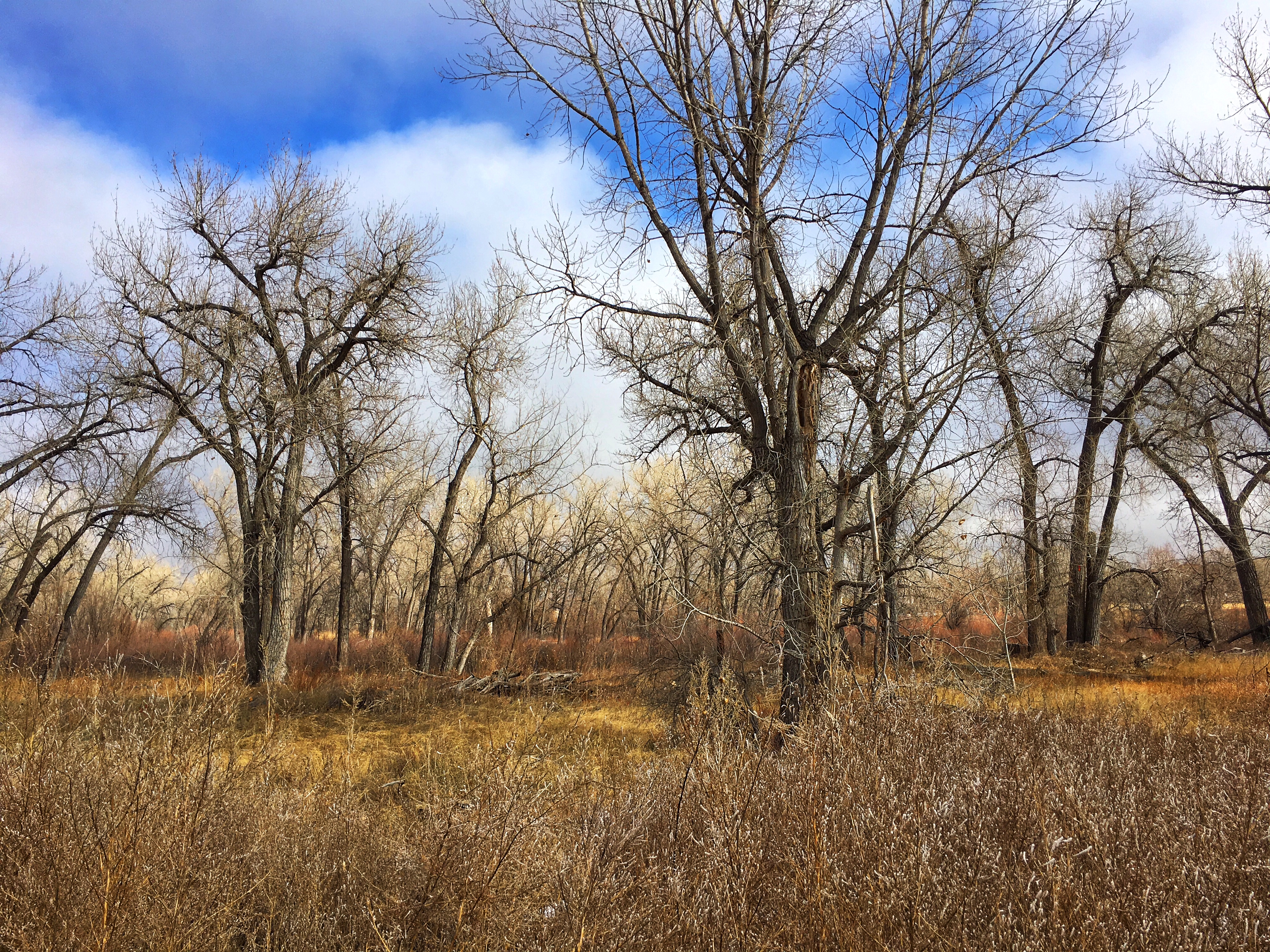 Update: The owl wasn’t reported by anyone else on Tuesday, or, in fact, on any day until the 13th—the following Tuesday. But it’s almost certainly still in the area. One of these sunny days, I hope.