On Barn Owls and Yoga

For the past week or so, birders have been reporting a Barn Owl nest at Red Rocks Park, west of Denver. Red Rocks is primarily a concert venue built into a group of sandstone rock formations in the foothills.

All I had to go on were some close-up photos on eBird of a section of one of the rock formations. In them, you can make out some young Barn Owls tucked back in the shadows of a ledge with an overhang. The cliff in front of the nest is white with bird splash. I figured that if I walked the trails at Red Rocks and looked for that whitewash on the cliffs, I’d find the nest.

I got to Red Rocks at 8:00 and parked in the first spot I found, a small pull-off by a trail head at the extreme south end of the park. I walked the Trading Post Trail, keeping my eyes on the cliffs. There were a handful of hikers on the trail, but it certainly wasn’t busy. This surprised me because, as I got closer to the amphitheater, I could see several parking lots, and they were all packed. I knew there wasn’t a concert, but something was drawing a crowd. I soon found out.

When I got to the gate, I had to wait 10 minutes while a long stream of people in exercise clothes, carrying rubber mats, strolled out. It turns out there was a ticketed morning group yoga exercise in the amphitheater. I don’t know how many people can do yoga at the same time in that space, but whatever that number is, that’s how many people were there doing it. I’d estimate at least a couple thousand. 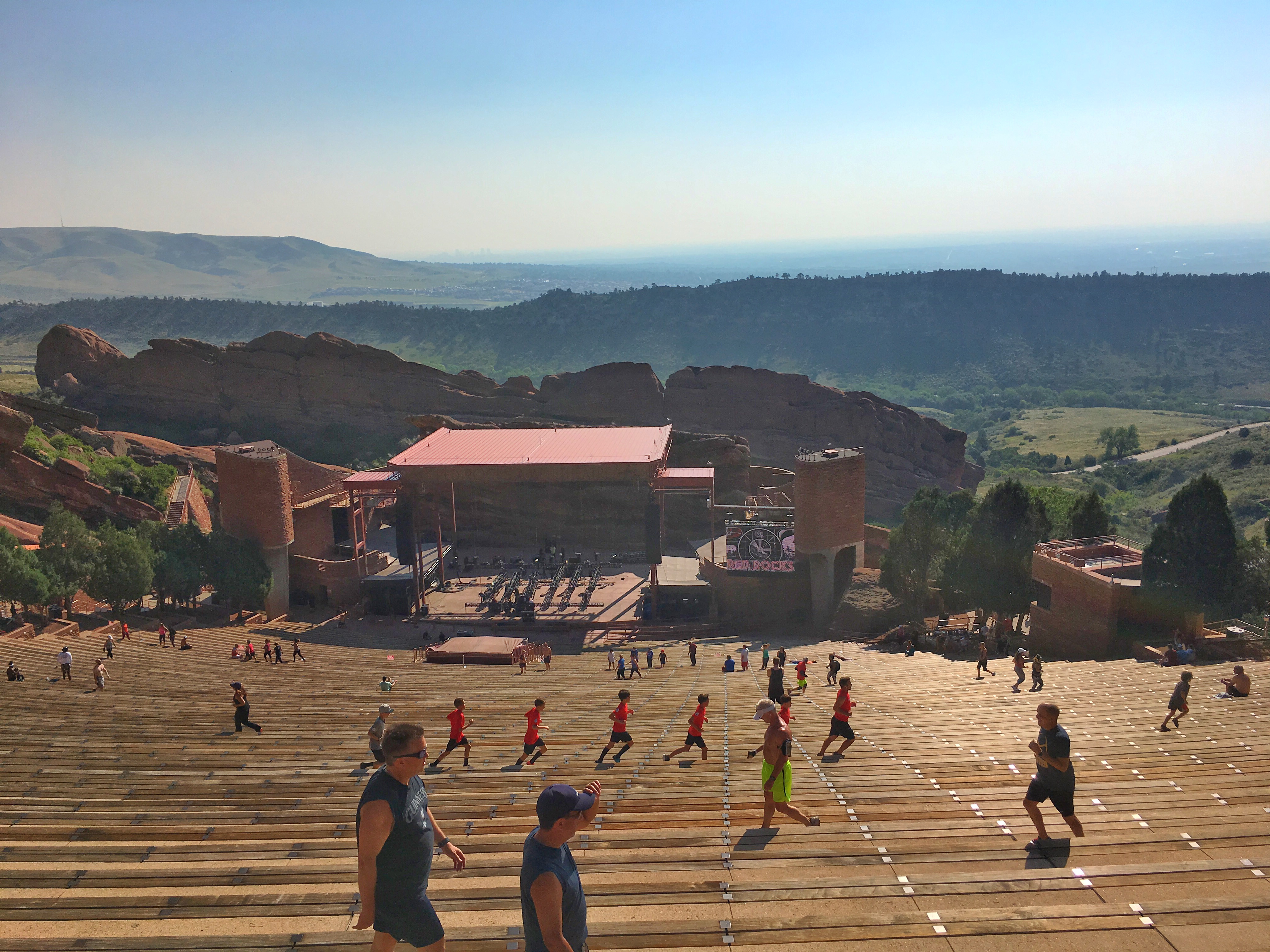 When I was finally allowed in, there were still a lot of yogaers milling around. I crossed the arena and climbed the stairs. The trail at the north end of the park climbs a steep hill. I’m guessing it was at least 800 feet of elevation gain from the car. It was every bit as steep as Quandary Peak last weekend, but not as long, of course. I stopped regularly to check out the rock faces for whitewash. I was pretty sure I was being thorough, but I wasn’t seeing much. 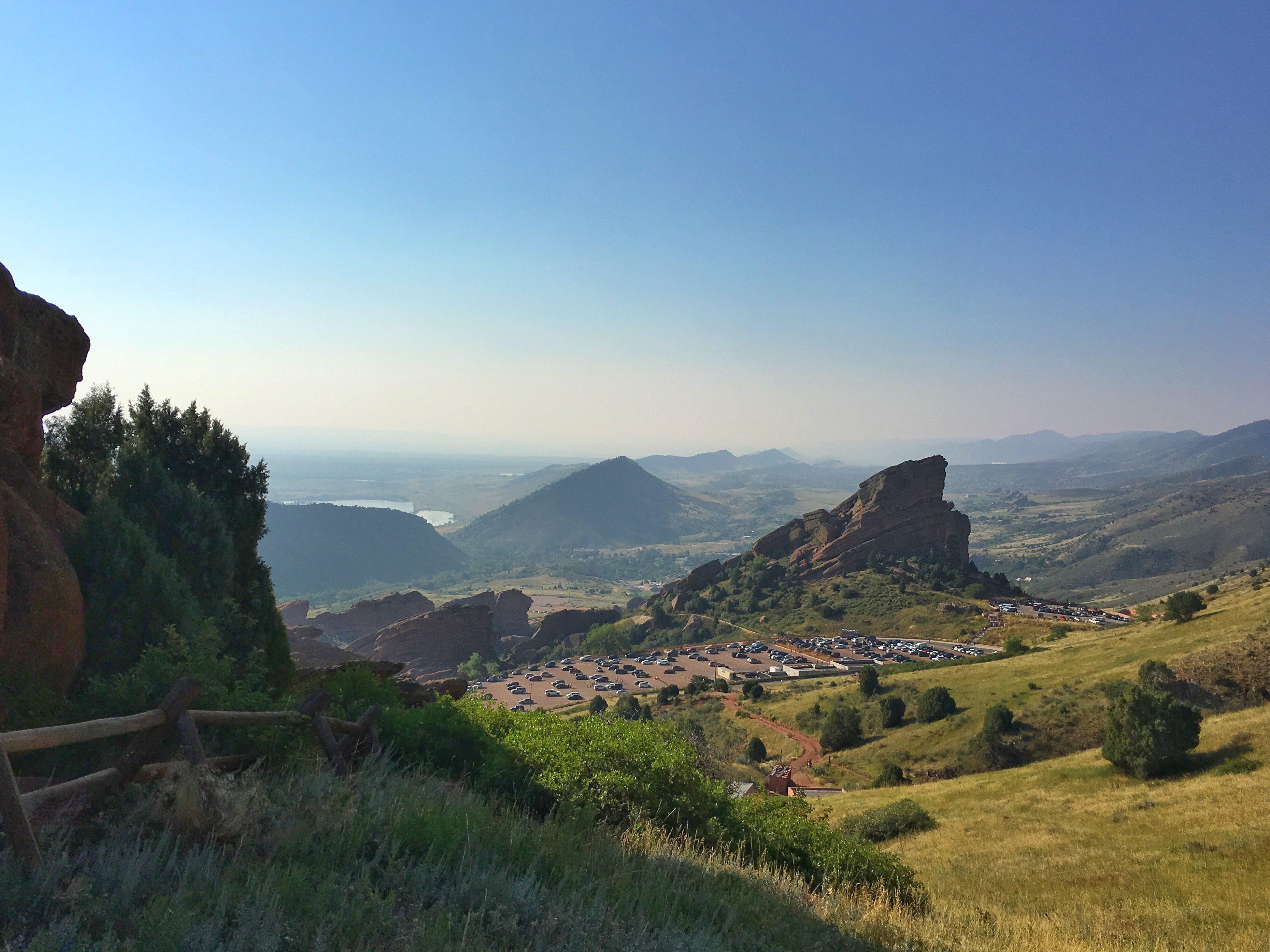 When I got back closer to the top of the amphitheater, I did spot a stick nest high on a cliff above the visitor center, but that obviously wasn’t a Barn Owl nest. I’m pretty sure it was a Peregrine Falcon nest, because I saw two of them flying around the area a short time later. 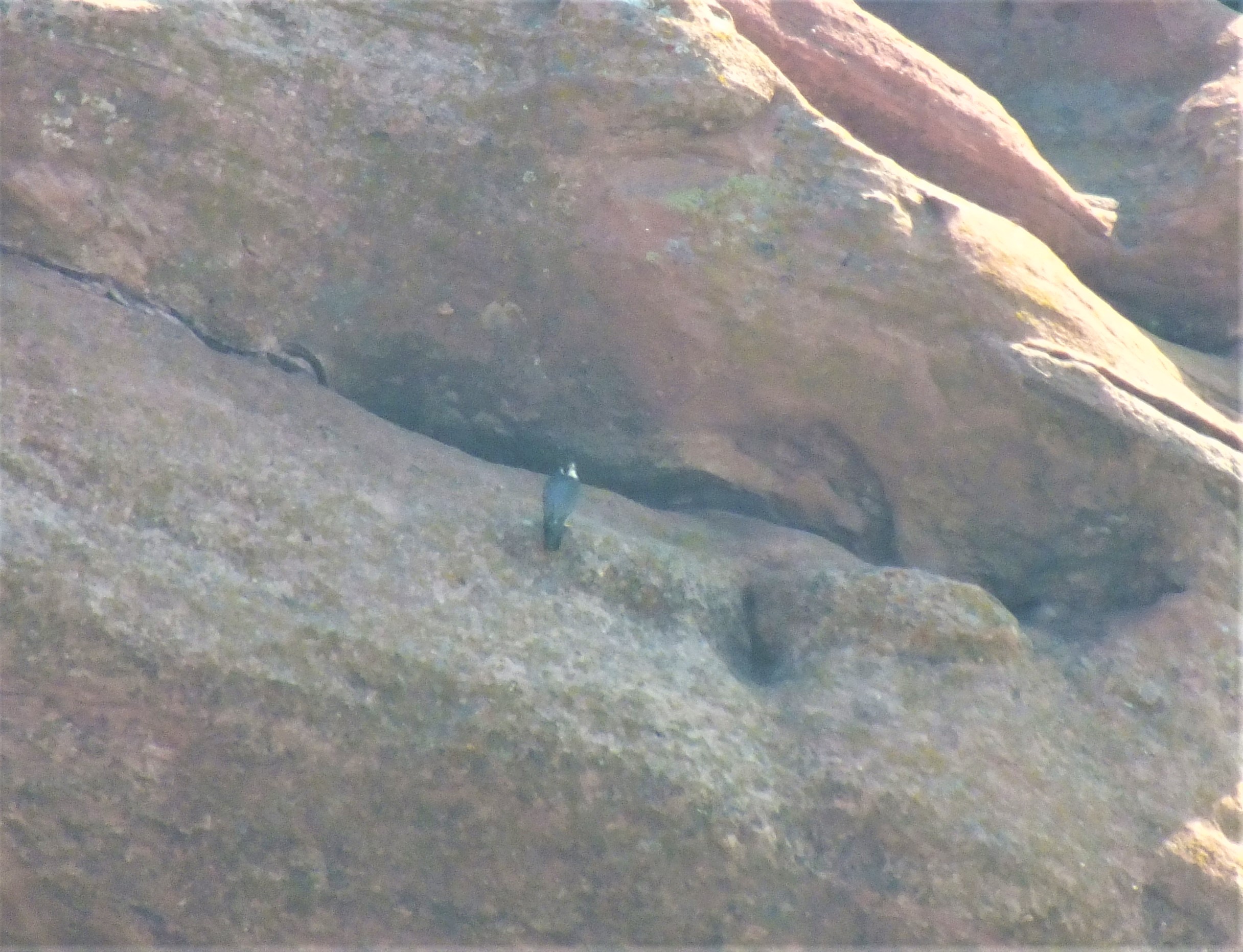 The forecast for Denver today was 90°, and it was heating up rapidly. I passed a maintenance worker and asked him if he knew where the owl’s nest was. He said, “Owl? Most people are interested in the falcons.” I also asked a parking lot attendant and he said, “I saw an owl behind the trading post once.” I was obviously on my own. 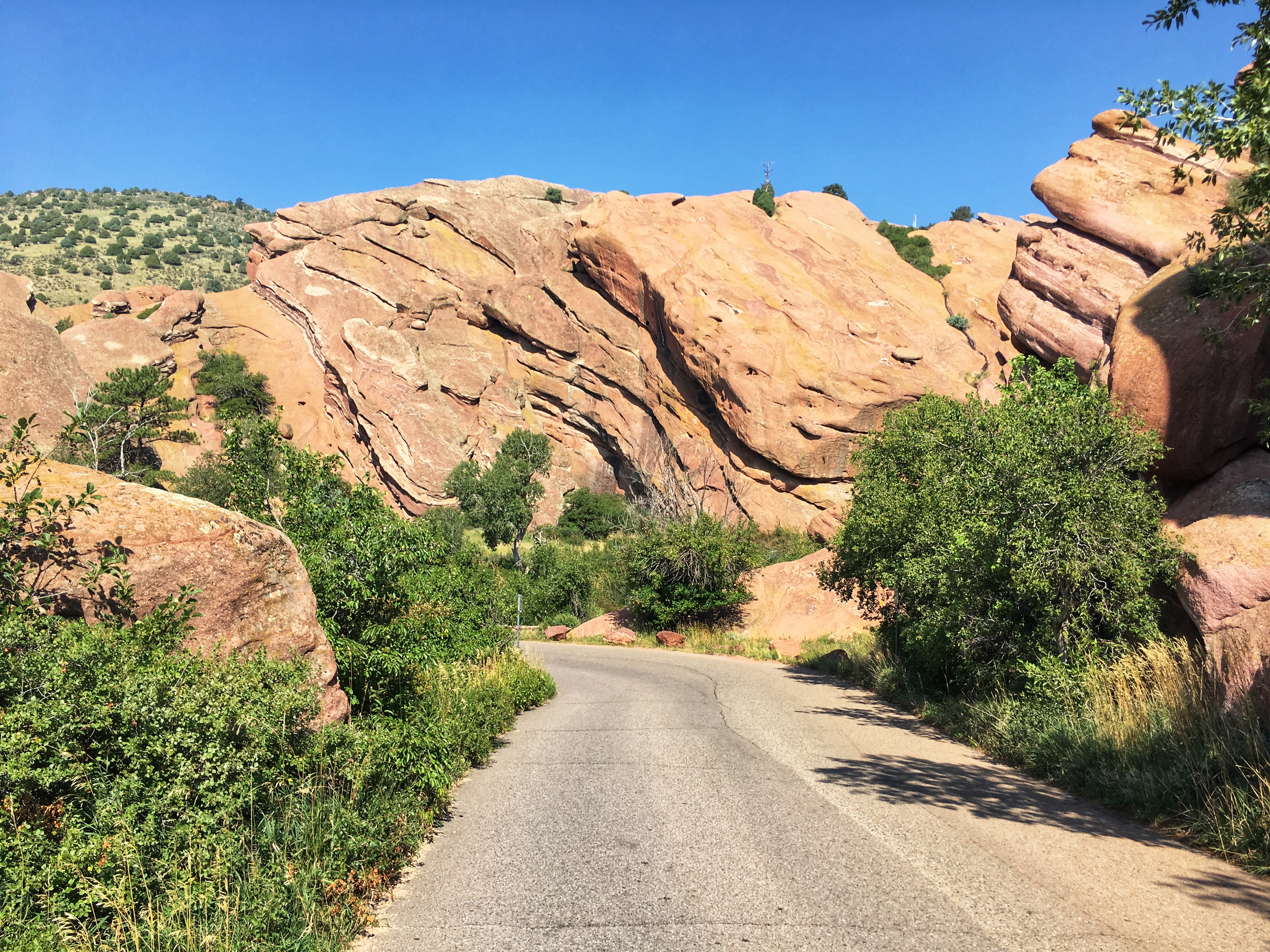 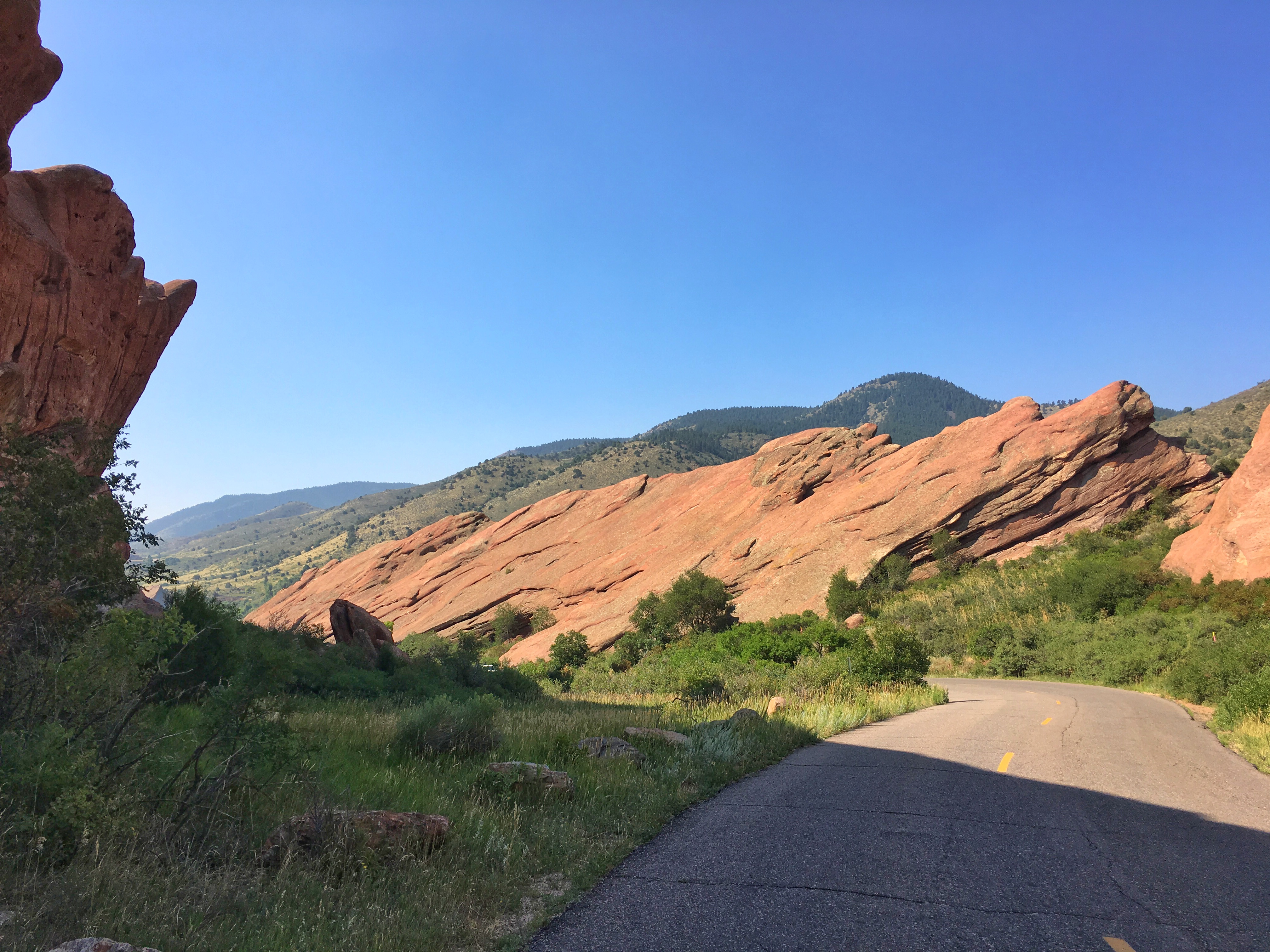 I walked down through the arena again and then took every path or road that gave me a good look at the cliff faces. I was walking past the final rock formation before I got back to my car when I spotted a patch of whitewash high up on the cliff. I pulled up eBird on my phone and compared what I was looking at to the photos. Everything matched, but I couldn’t see into the shadows with by binoculars. At this point, my car was only 30 yards away. I pulled my scope out of the trunk and spent about 20 minutes looking at two baby Barn Owls. One was pretty much adult size and had feathers everywhere except for a remaining patch of gray down on its back and head. The other one was smaller. All I could see of it was the head and shoulders, and they were covered with white down. I could clearly see the classic Barn Owl “monkey face” on the younger one, but the larger one was hard to make out. I stuck with it and finally saw it turn its head enough that I could make out its face. (Or at least I thought that’s what I was looking at. When I got home and looked at the video I shot by holding my phone up to my scope, I see that there were at least two downy young and I’m not sure if the one with the feathers is the adult or not.) 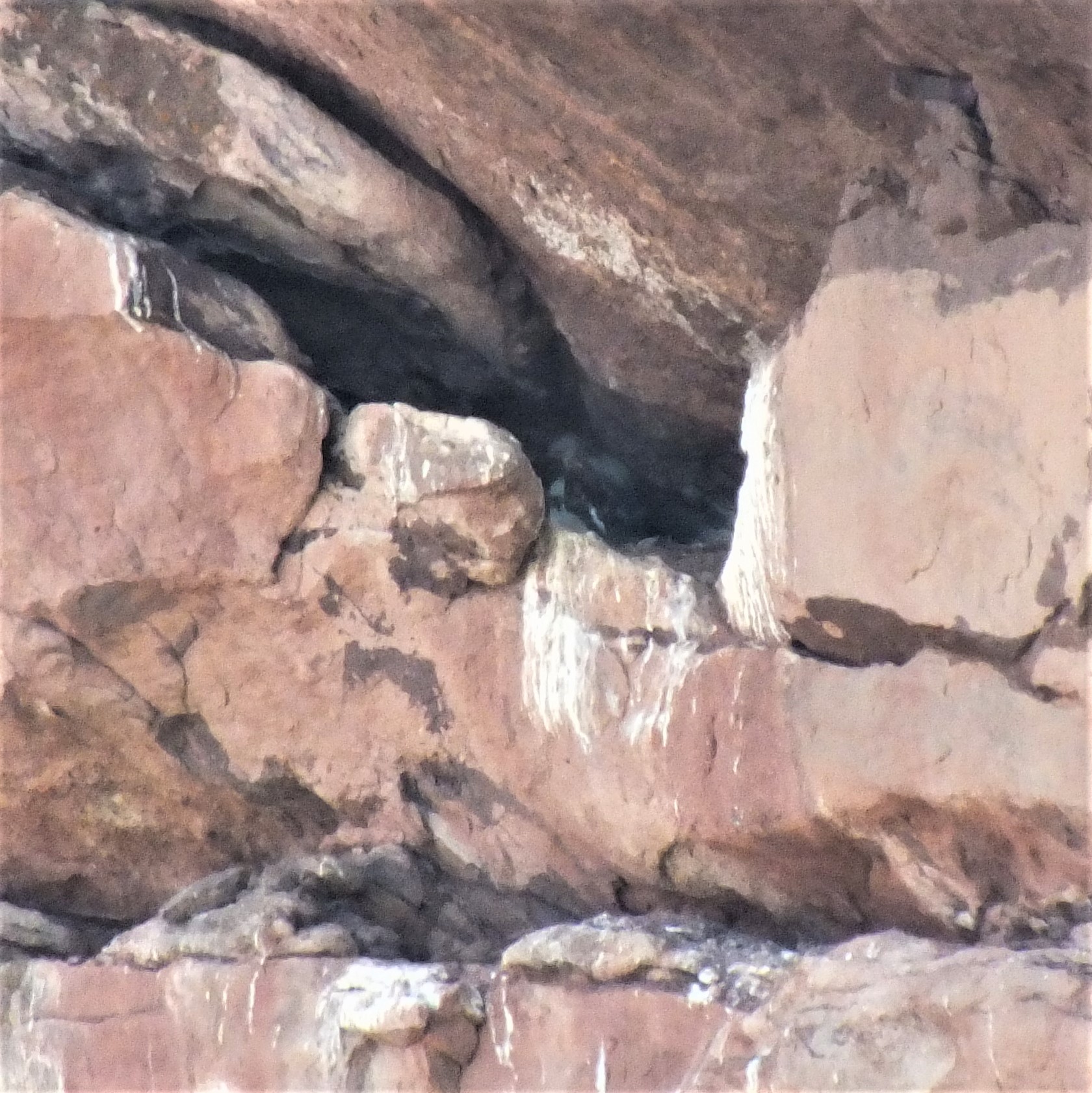 I was finally satisfied—and hot and thirsty and sunburned. I put my scope away and got in my car. When I looked up, I realized I could clearly see the nest—and the owls—through the windshield. If I had just know where to look, I wouldn’t have needed to get out of my car. (Well, OK, I still would have needed to get my scope to get good views and it was in the trunk, but you know what I mean.)

Here’s a map of the park. The red X is where I parked. The red circle is where I was when I found the nest. The blue arrow points approximately to where the nest was. 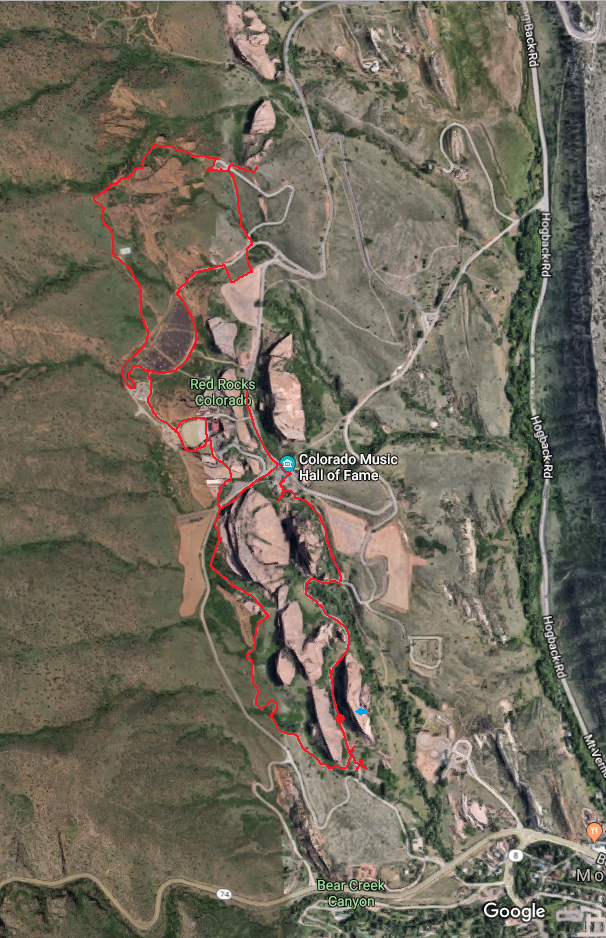