On Melons and Roadrunners

The Arkansas River Valley, where it cuts through the plains of southeastern Colorado, is known for melons. The farms are clustered around the small town of Rocky Ford. During late summer, Rocky Ford melons are available all over the state. And they are good.

On Sunday after church, we did our weekly grocery shopping. We bought two melons, a watermelon and a cantaloupe. More on this later.

On Saturday, a birder found two Zone-tailed Hawks in the Higbee Valley along the Purgatoire River south of La Junta. (The “junt” is pronounced like the “hunt” in hunter.) Zone-tails are generally found in southern New Mexico and Arizona. I’ve never seen one.  They have a reputation of being unchaseable. In other words, after a birder finds one, the hawk almost never sticks around long enough to be seen by other birders. But there were two, which I thought doubled my chances. 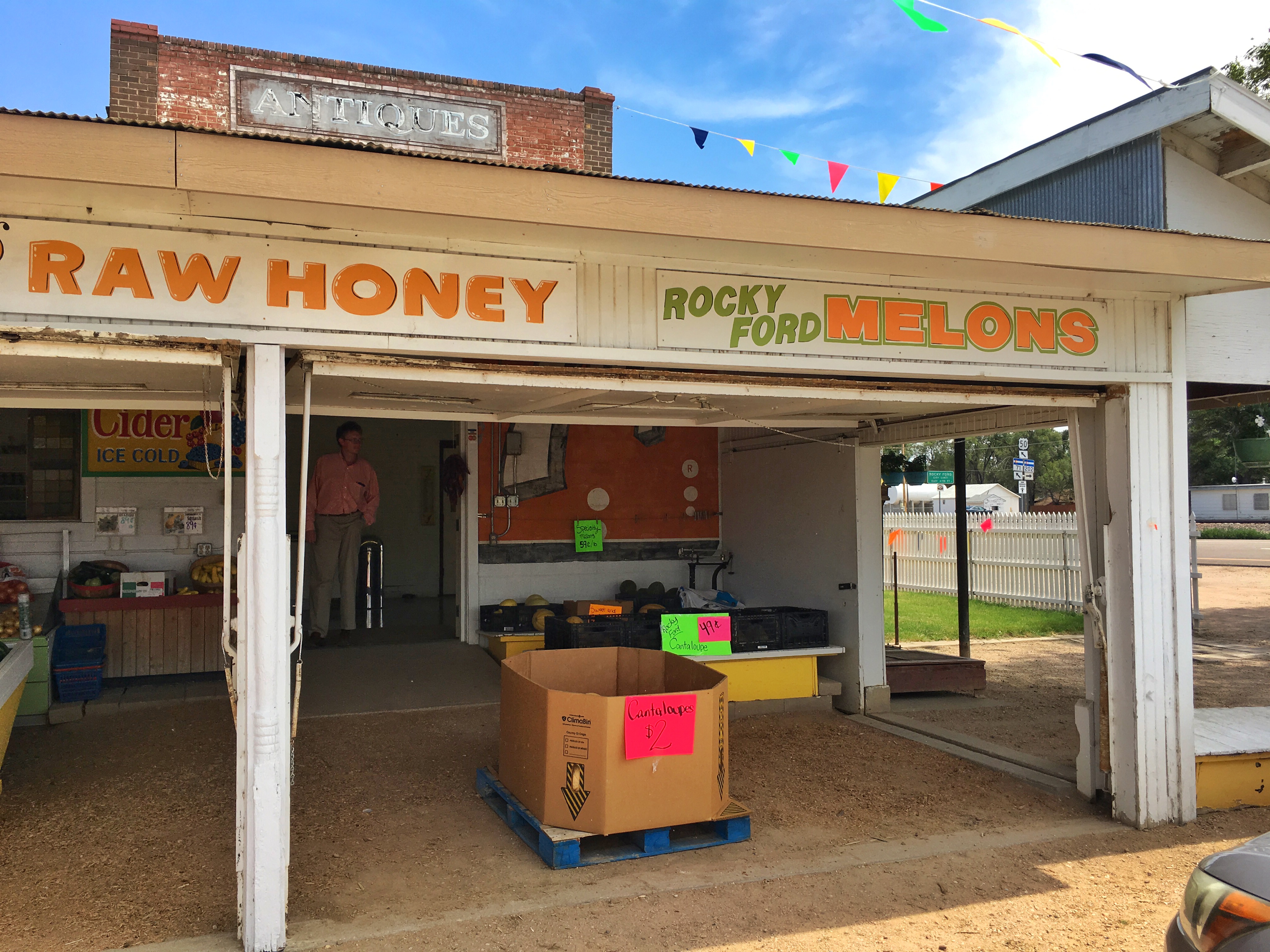 The guy standing in the doorway in the photo came out to help. I told him I wanted a couple melons but didn’t know much about how to pick them. As I sorted through the melons in the big box, I noticed most of them had soft spots. The guy started taking them from me and tossing them. He said, “My rule is that if I leave fingerprints on the melon, it’s too ripe.” No joke. He finally took me to other bins and we found a couple. He told me I should probably eat one of them that day.

Experience-wise, it just wasn’t very satisfying. Especially when I pulled back on the road and passed several other larger markets with great piles of melons. My car began smelling like cantaloupe almost immediately.

I got to La Junta a short time later and headed south into the dry plains. 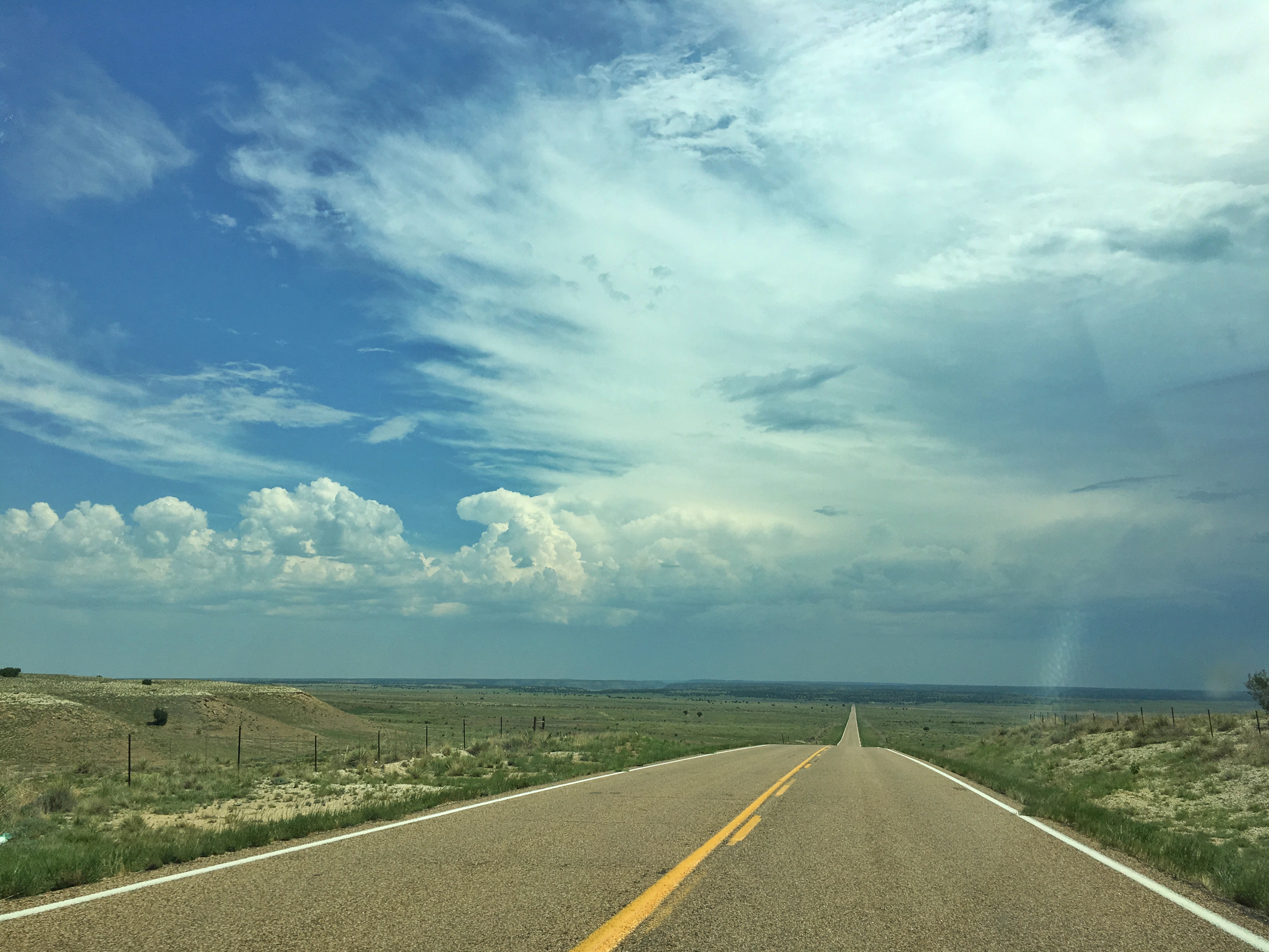 The road cut across a corner of Comanche National Grasslands. As I drove, I noticed the sky getting a decidedly threatening look. 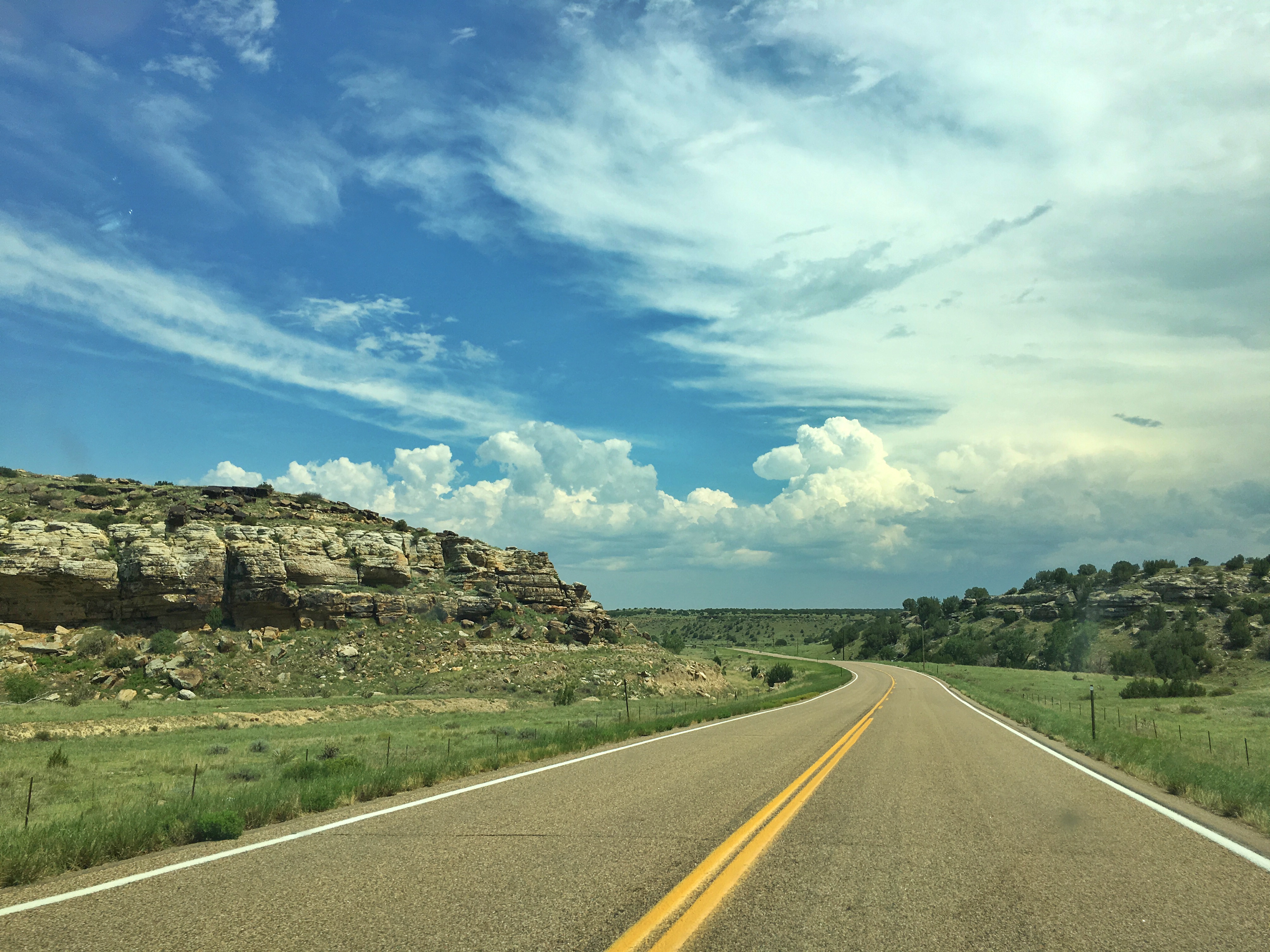 I found Higbee Valley Road and drove slowly, checking out all the birds I saw and especially the Turkey Vultures, of which there were many. I continued for about six miles, then turned around and drove slowly back. I didn’t see any Zone-tailed Hawks. I did see a Mississippi Kite, several kestrels and Swainson’s Hawks, Blue Grosbeaks, and a pair of roadrunners.

One jumped on a fence post as I went by. I pulled my car at an angle across the road so I could get a photo looking back at it. 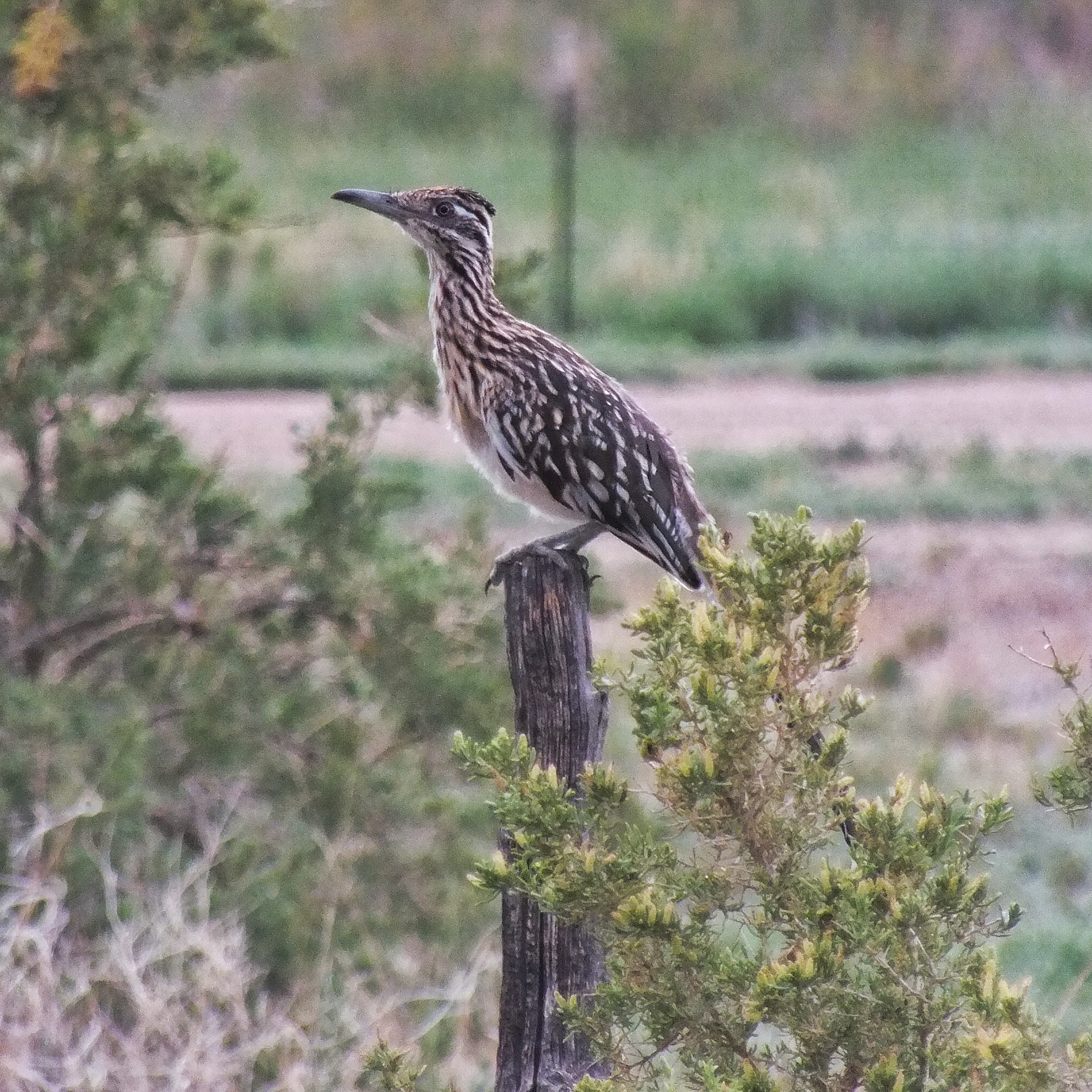 A second roadrunner popped out of the weeds and began walking toward my car. It passed right by me, not four feet from the window where I was taking photos. I never got close enough to one before to see the blue on the tail. 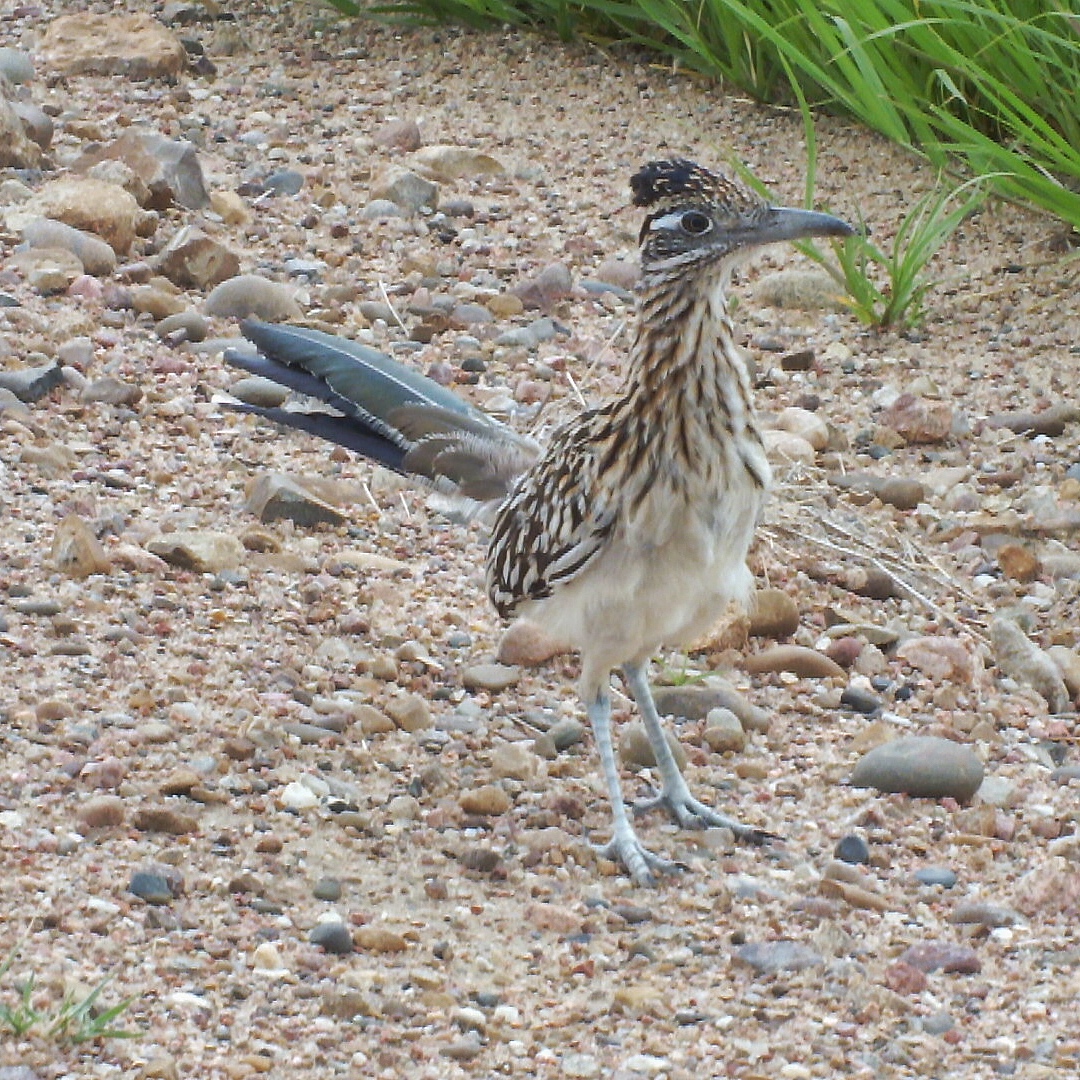 On my way back up the valley, I spotted one of them on a rock. As I watched, it yawned. 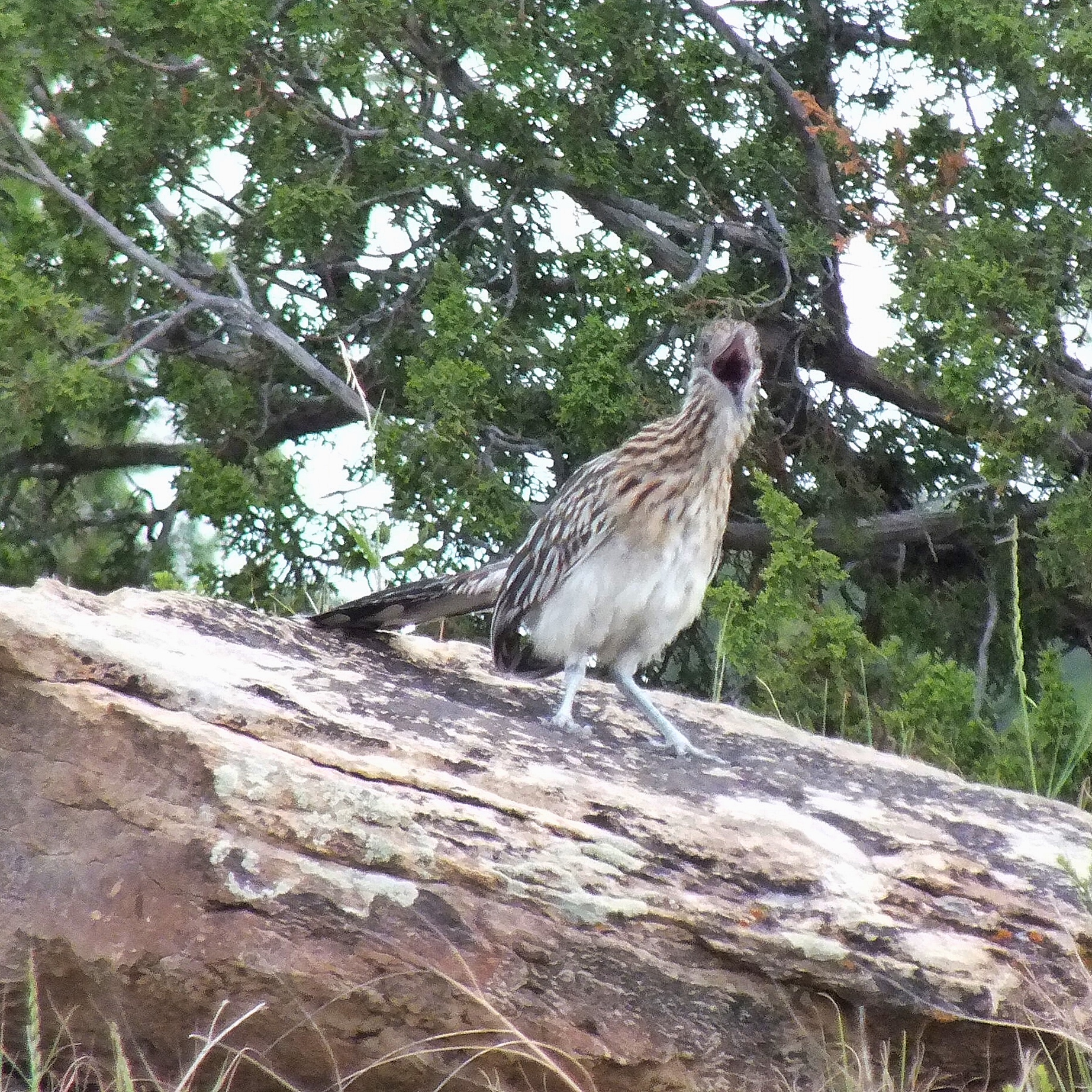 The storm disappeared after a mild ten-minute shower, and the sun came out. This brought out the Turkey Vultures, and I scanned them carefully. Some of them probably several times. 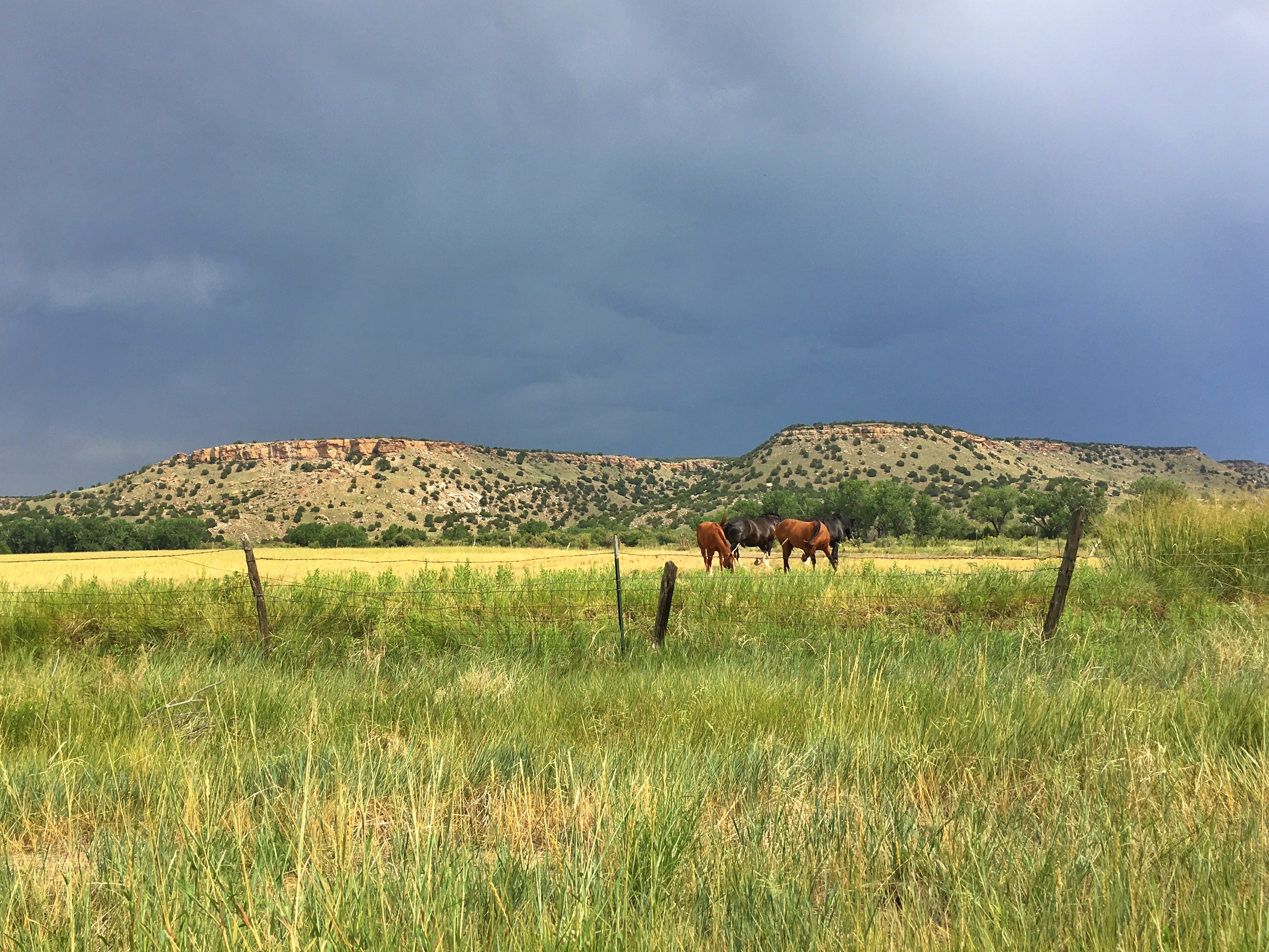 It was a fun road to bird, and I decided I wanted to come back sometime. But I had a long drive ahead of me, and I had to go to work in the morning. As I headed through Rocky Ford and passed one of the nicer market stands, I pulled in on impulse. 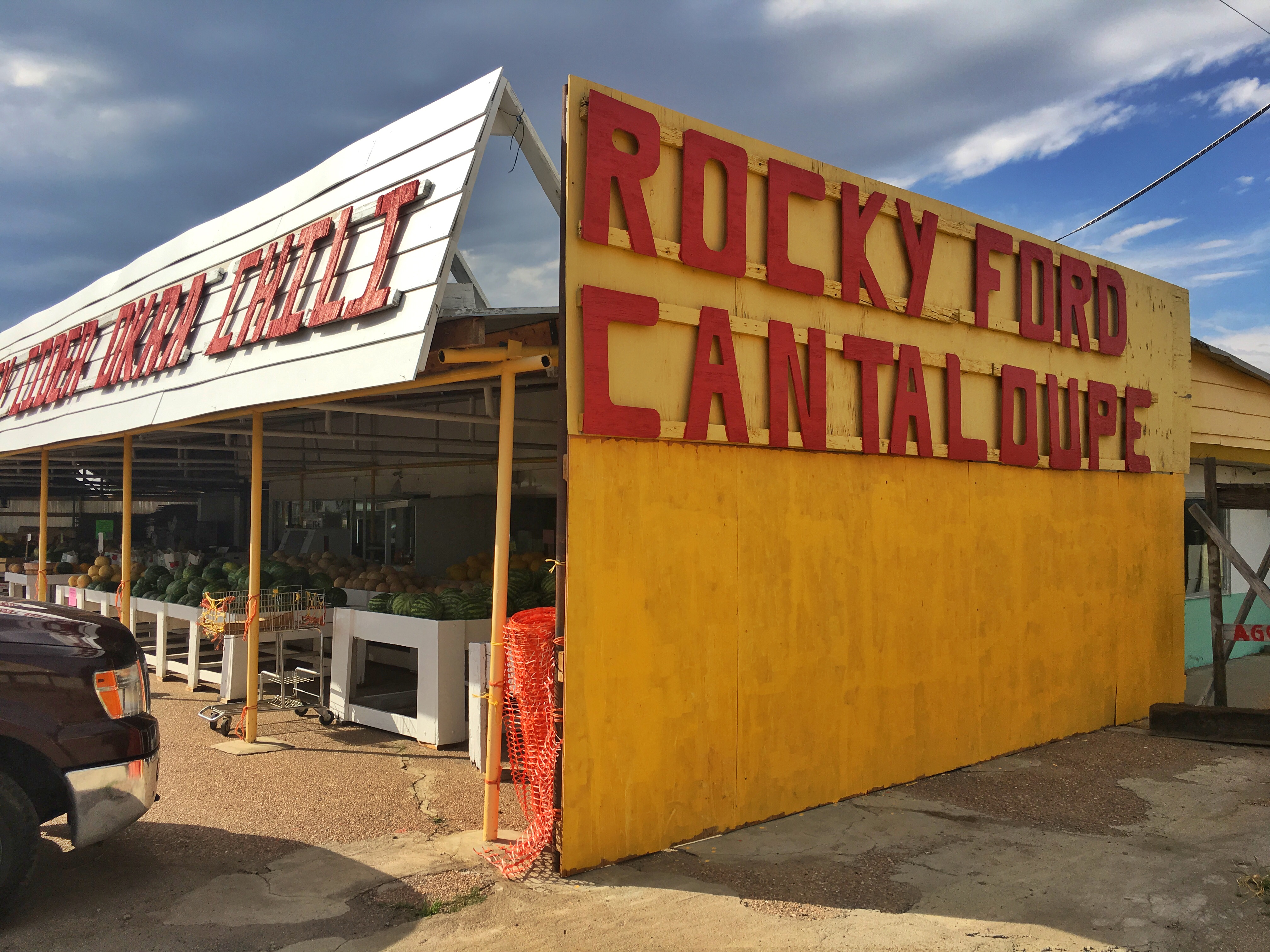 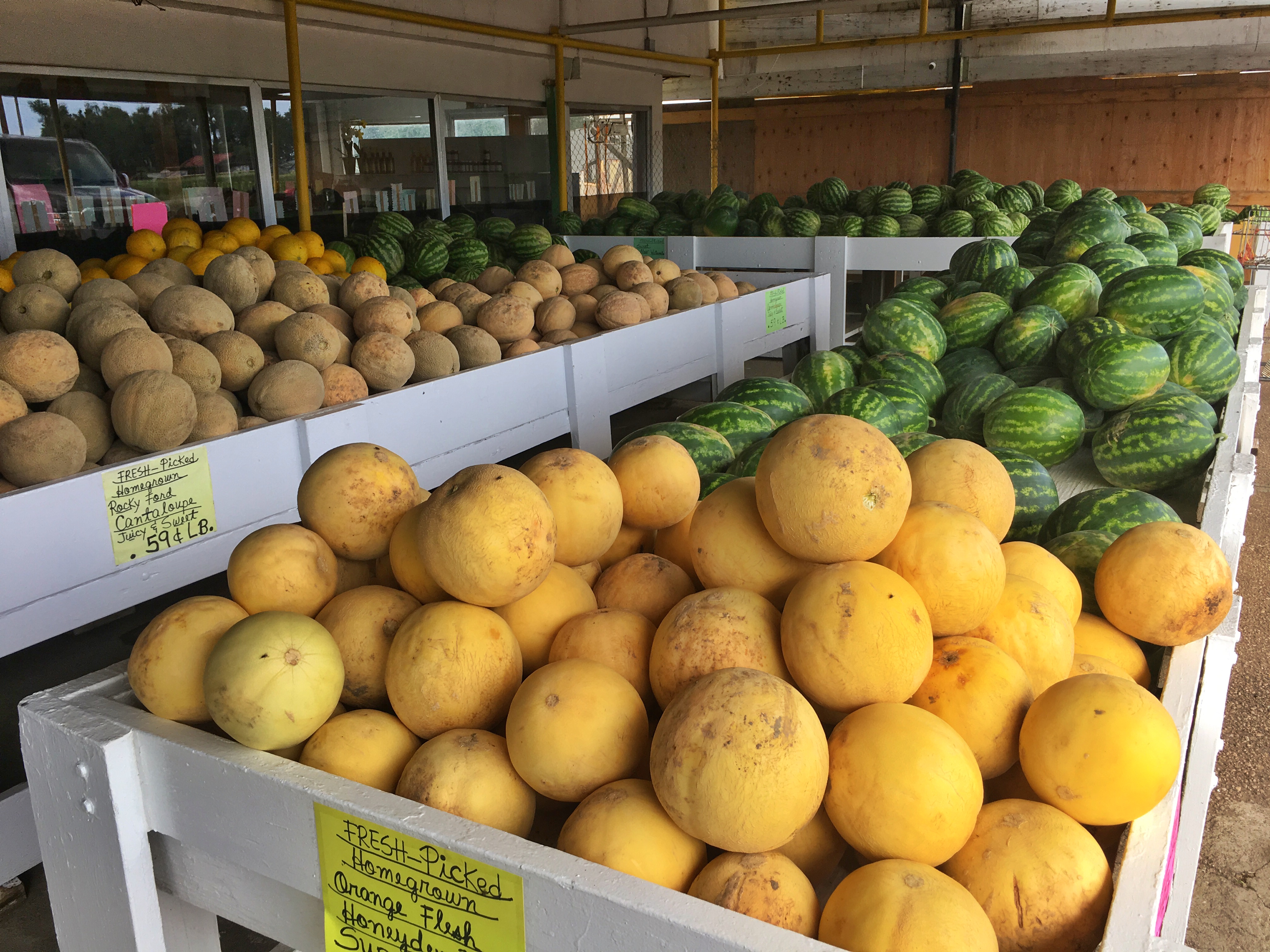 I bought a cantaloupe, a honeydew melon, and several very fuzzy peaches. We now had six melons. The ride home was uneventful (except for the smell of cantaloupes). I arrived around 6:30.

My wife cut up the one from the sketchy place that the guy said was should eat right away. It was green on the inside, and very juicy. It tasted a little like a honeydew, but with a squishier texture. It was good. The next day, she cut up two cantaloupe. They were also very good. The fourth cantaloupe I took to work and put on the kitchen counter for whoever wanted it. it went fast. We still have a watermelon and an honeydew to go.

Eight days later, I drove out to Higbee Road again to look for the hawks. I missed them again, but I did see a couple Chihuahuan Ravens up close. These grainy photos are screen shots from a grainy video. 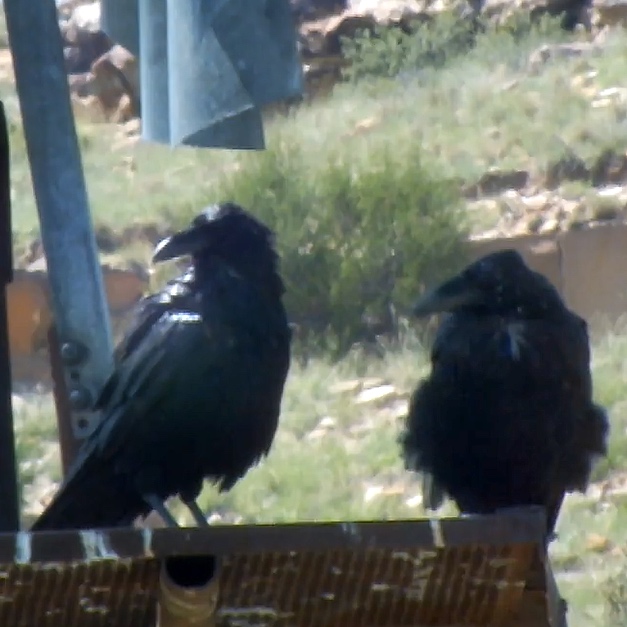 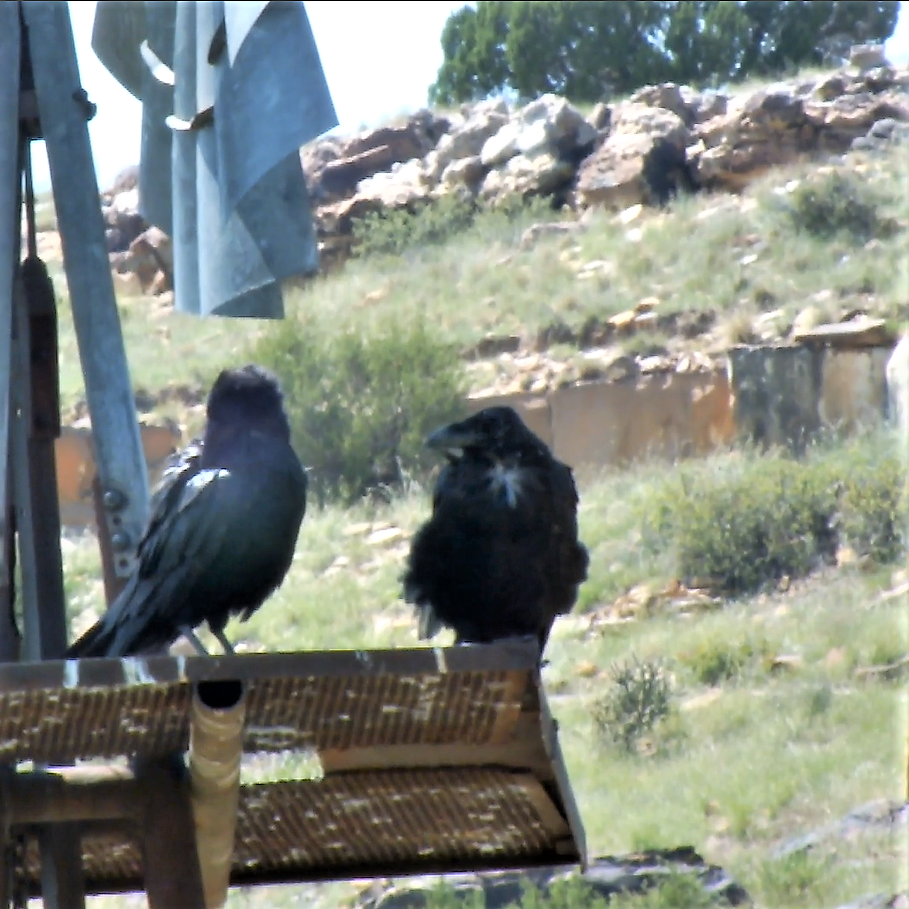 This entry was posted in Birds, Food, Scenery. Bookmark the permalink.