Outside the Ohio Statehouse

I spent an hour and a half on a rainy Monday morning exploring outside and inside the Ohio Statehouse in Columbus. Here in the approximate order in which I happened upon it, is what I saw.

I parked on the street about half a block away, and approached from the southeast. This was my first view of the weird abbreviated dome. 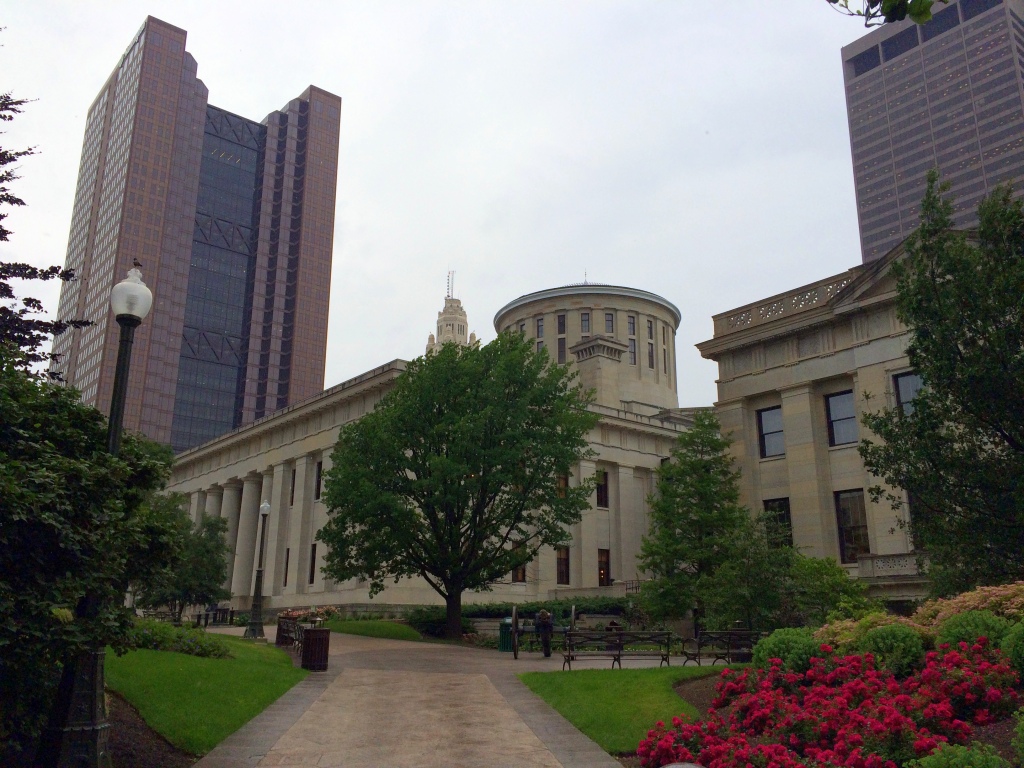 There’s a Civil War cannon at each corner of the plaza. 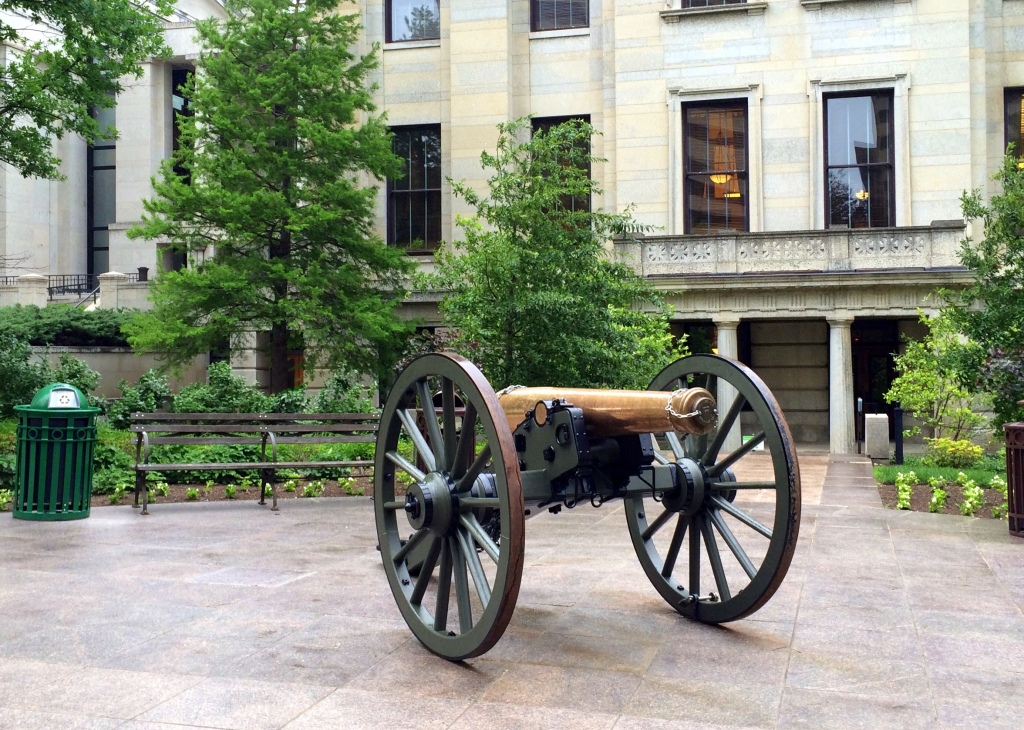 Monuments to soldiers of (left) the Spanish-American War, the Philippines Insurrection and the China Relief Expedition and (right) World War I. 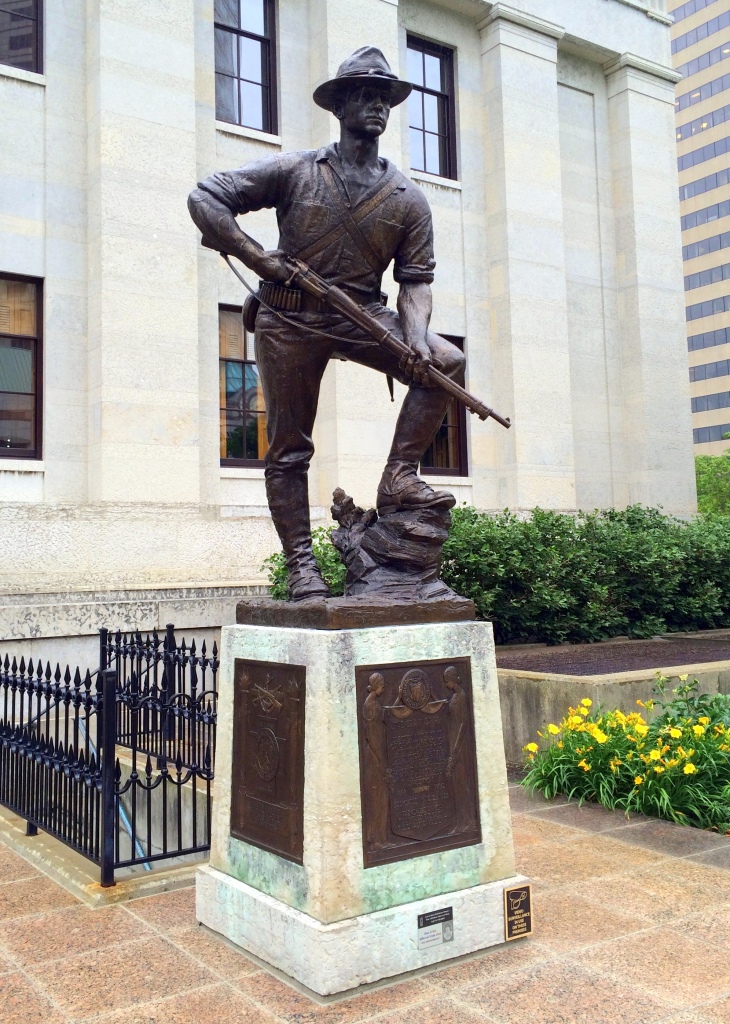 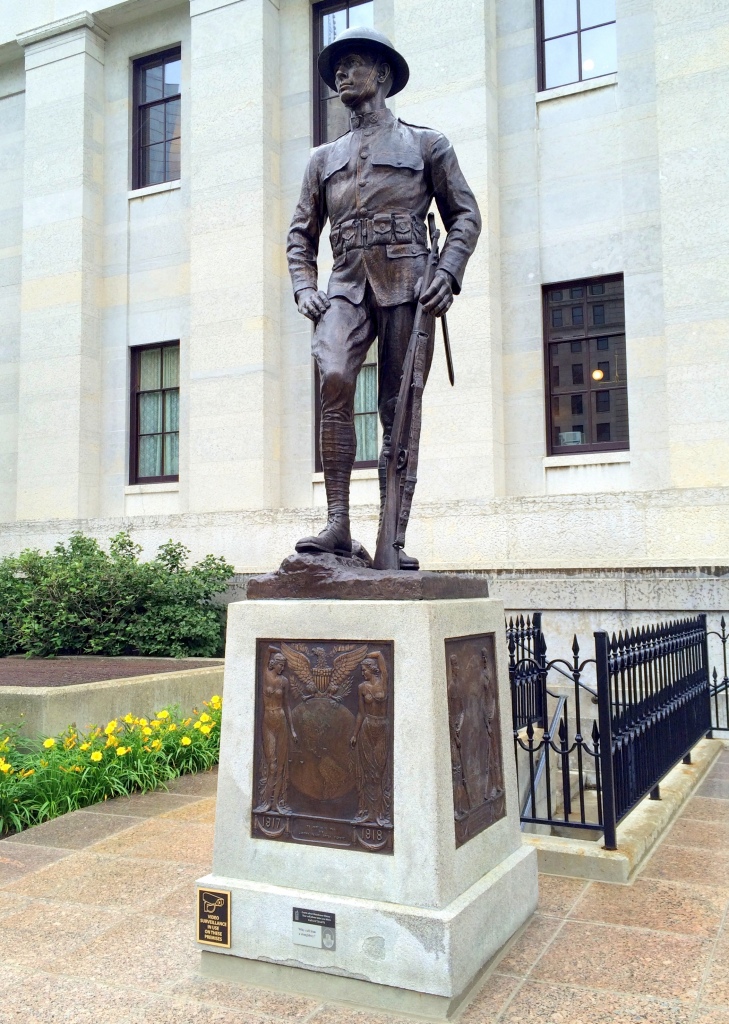 The west side. I still think (and always will) that the cupola without a dome looks unfinished and weird. 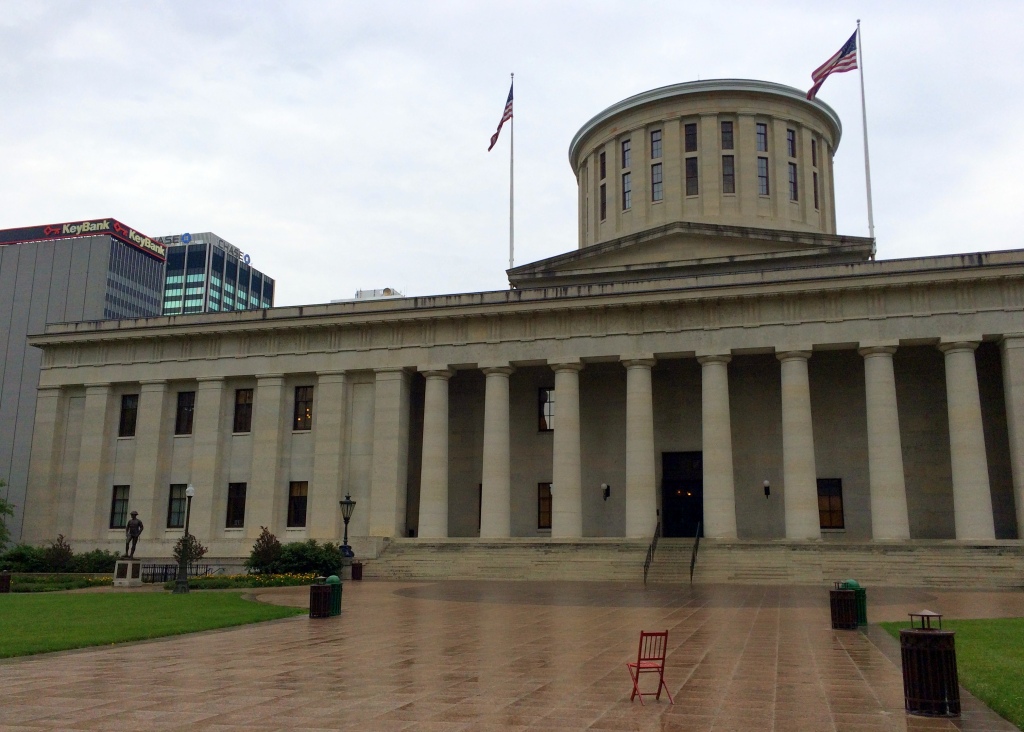 President William McKinley Memorial. McKinley was a native of Ohio and governor of the state from 1891 until 1896 when he became President. When McKinley was in Columbus, he and his invalid wife Ida lived in the Neil House Hotel across the street from the Statehouse. As William walked across the road to work, he would stop at this spot and wave his handkerchief to his wife who was watching out the window.

The statues on the sides represent peace and prosperity, both with children who represent future generations. 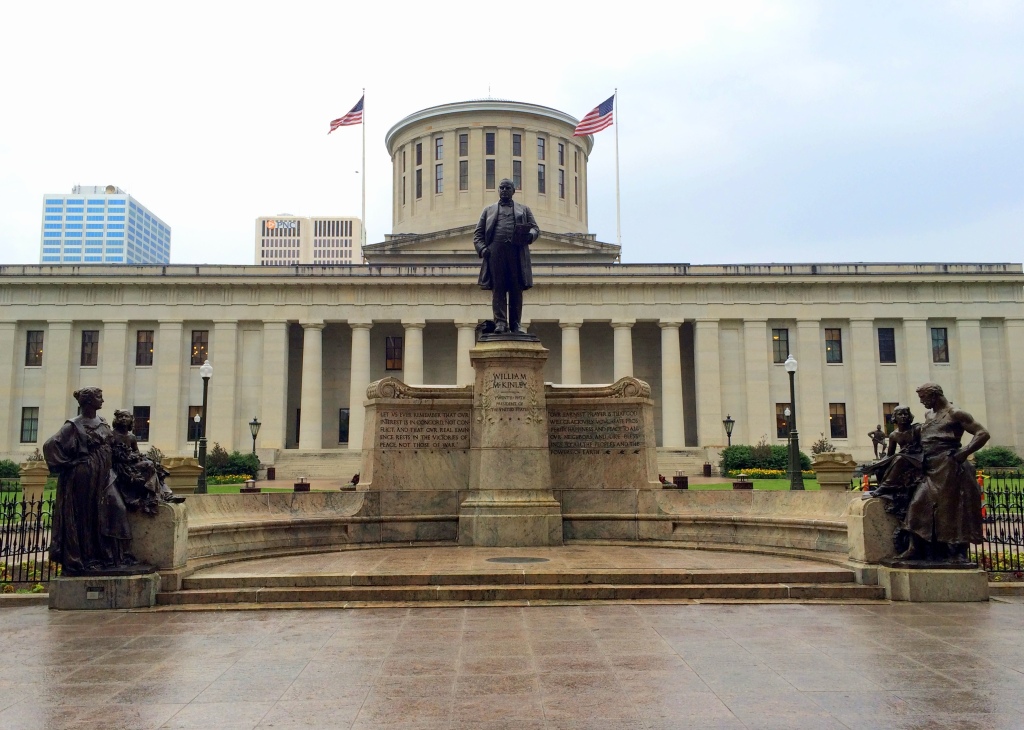 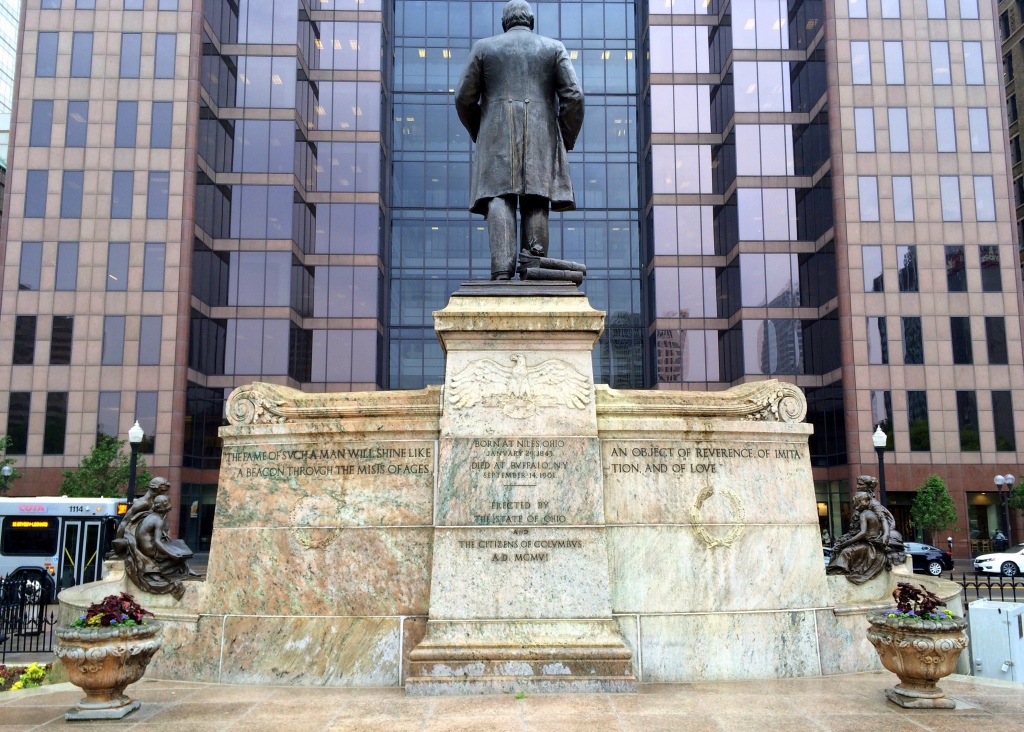 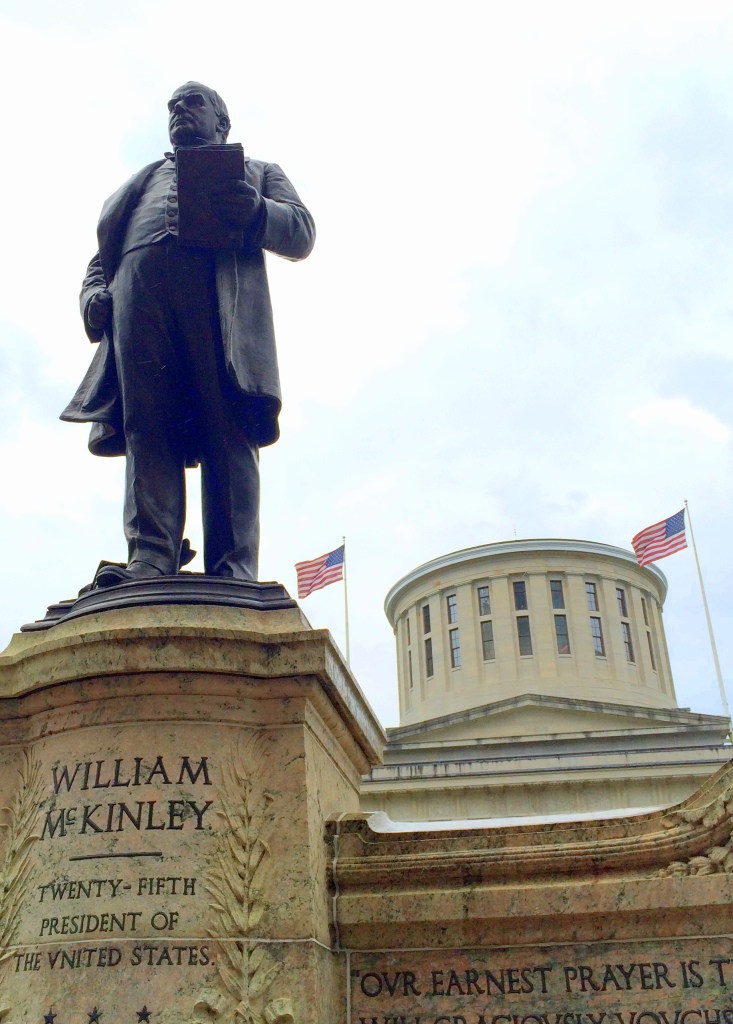 The quote is from the speech he made in Buffalo, New York just before he was assassinated.

The state seal of Ohio 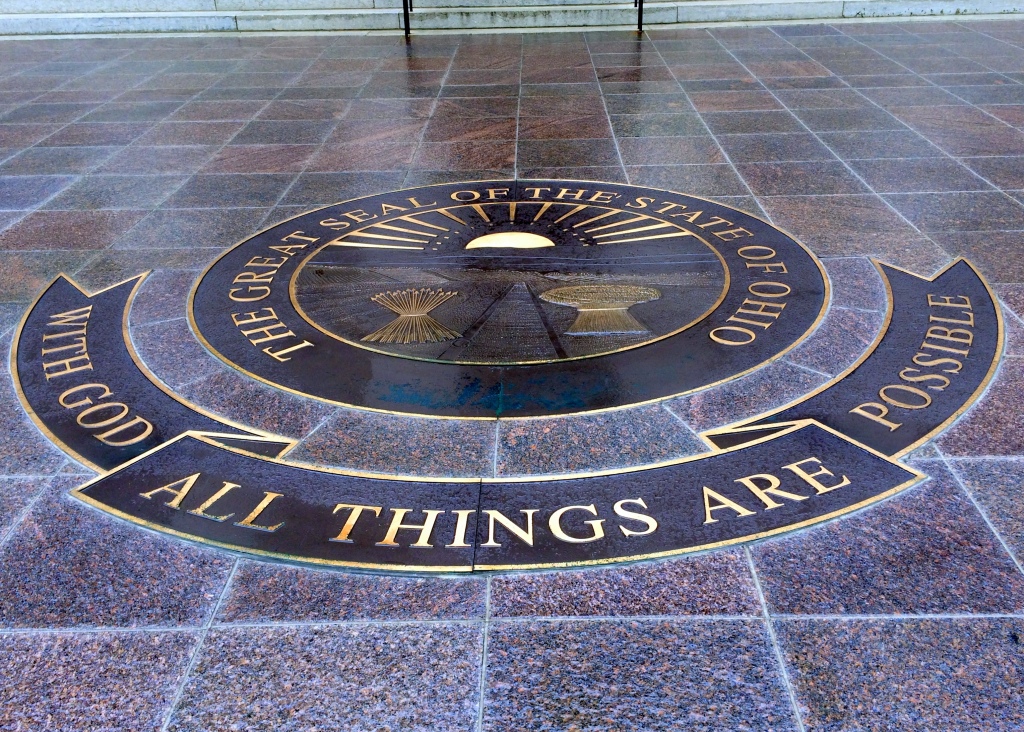 This statue is called “These Are My Jewels” referring to a legend about a Roman woman named Cornelia who, when asked where her jewels were, returned with her sons. The seven men around the base are seven natives of Ohio who were active for the Union during the Civil War. They are Generals Ulysses S. Grant, William T. Sherman and Phillip Sheridan; Generals and Presidents James A Garfield and Rutherford B Hayes; Secretary of the Treasury Salmon P. Chase; and Secretary of War Edwin Stanton. It was created for and displayed at the World Columbian Exposition in Chicago in 1893.

James Thurber, a native of Columbus, wrote the statue into a short story titled The Day the Dam Broke. He described a mob of women climbing onto the shoulders of the Jewels to escape an imaginary flood. 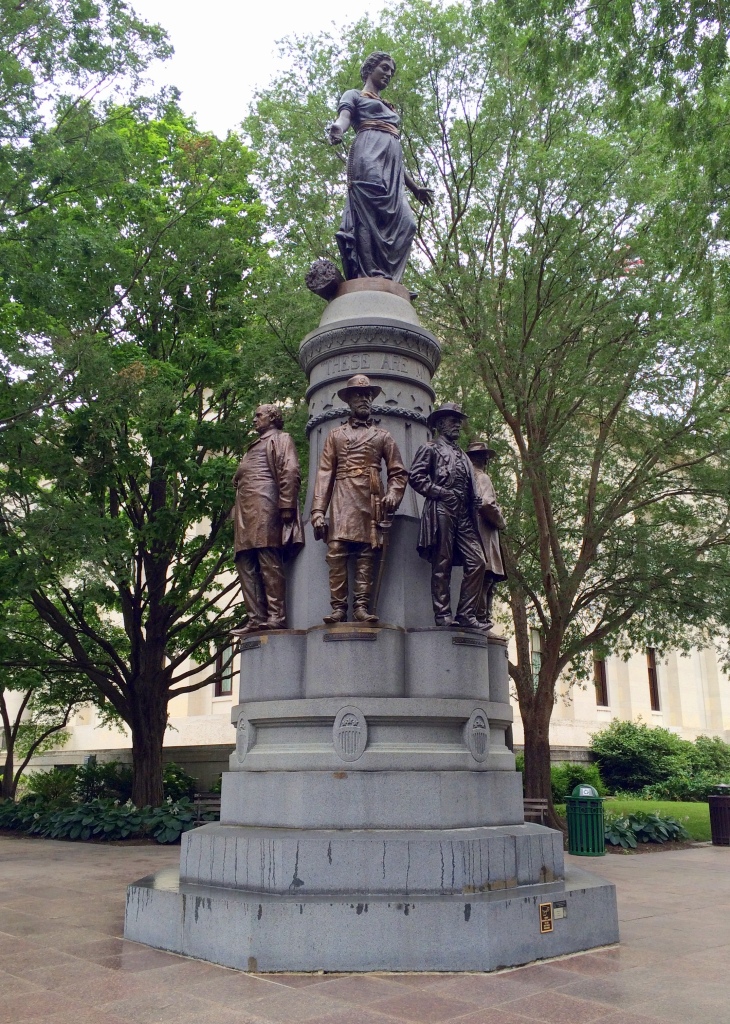 The north side. The Columbus Dispatch sign advertises the local newspaper which has been published since 1871. 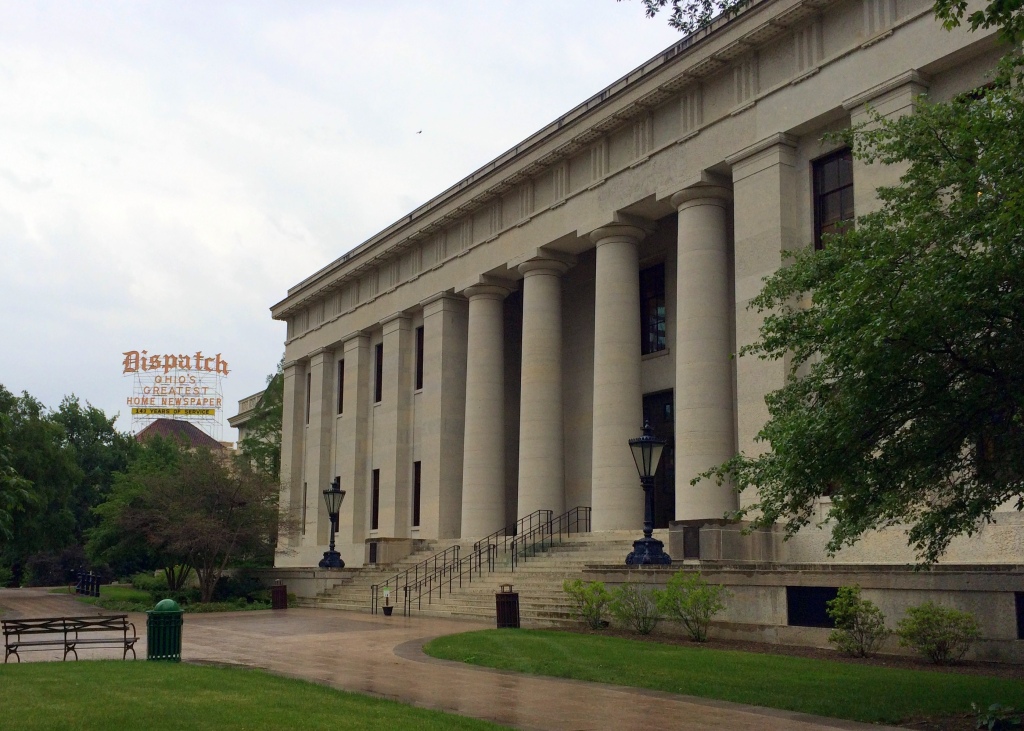 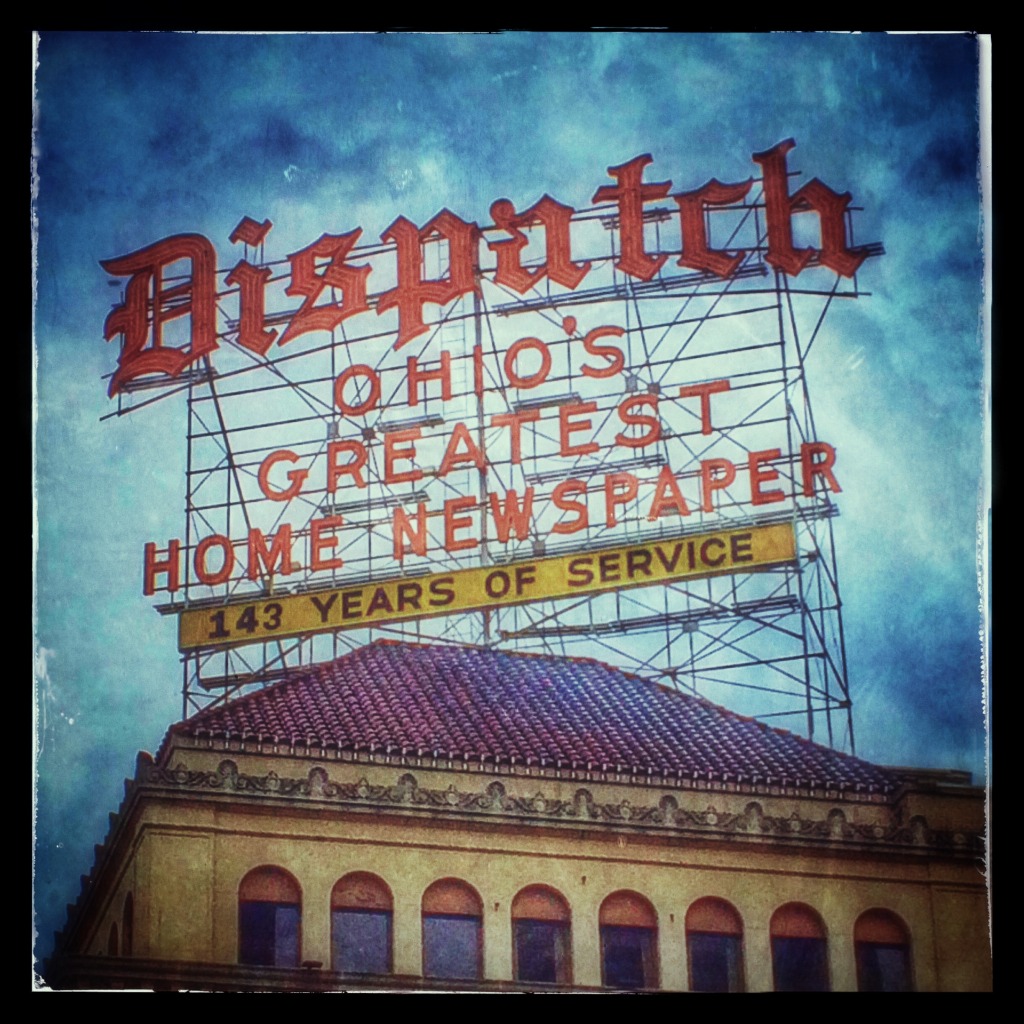 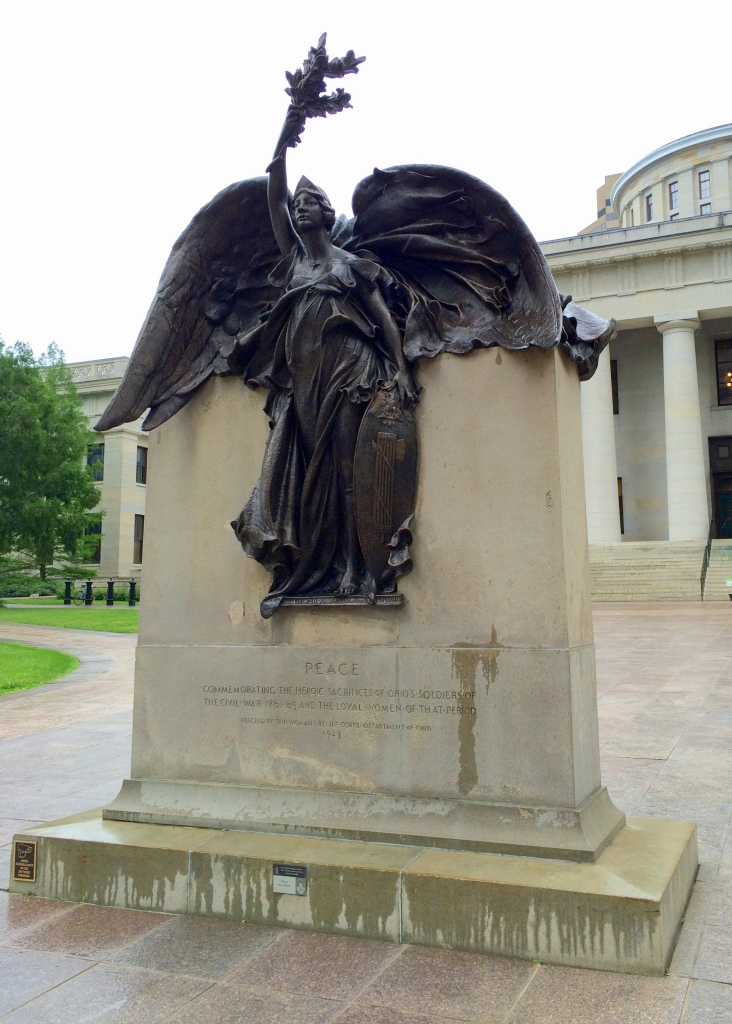 The east side, with flags for each of the counties in the state. They, and the curved white walls at each end of the plaza, commemorate the soldiers of World War II and wars since then. 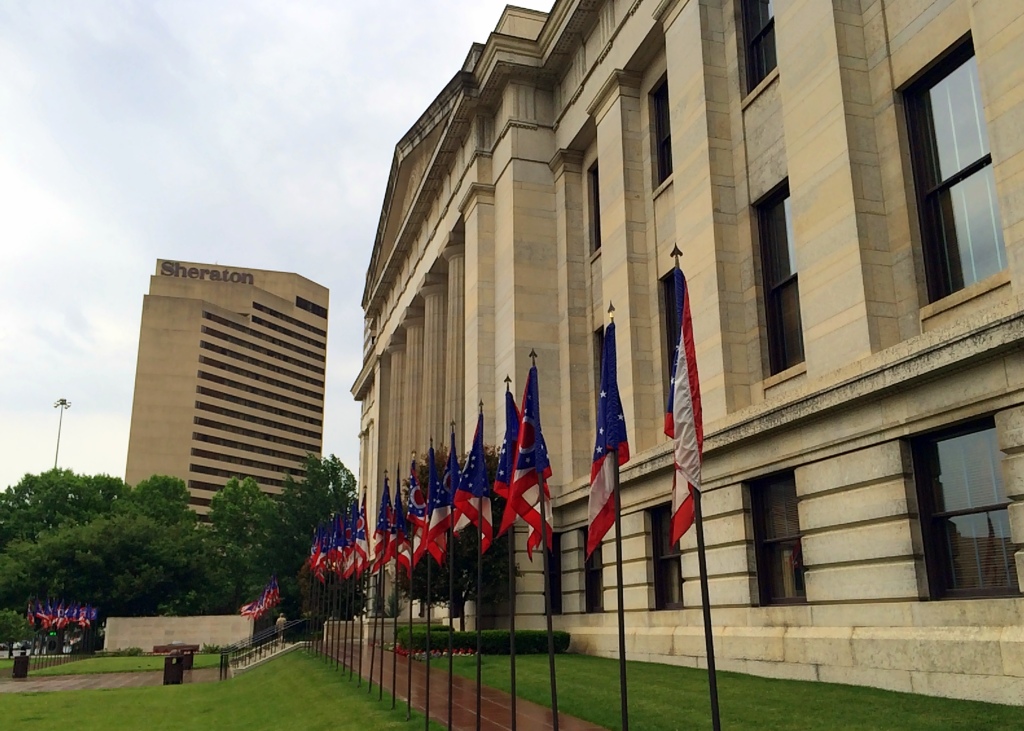 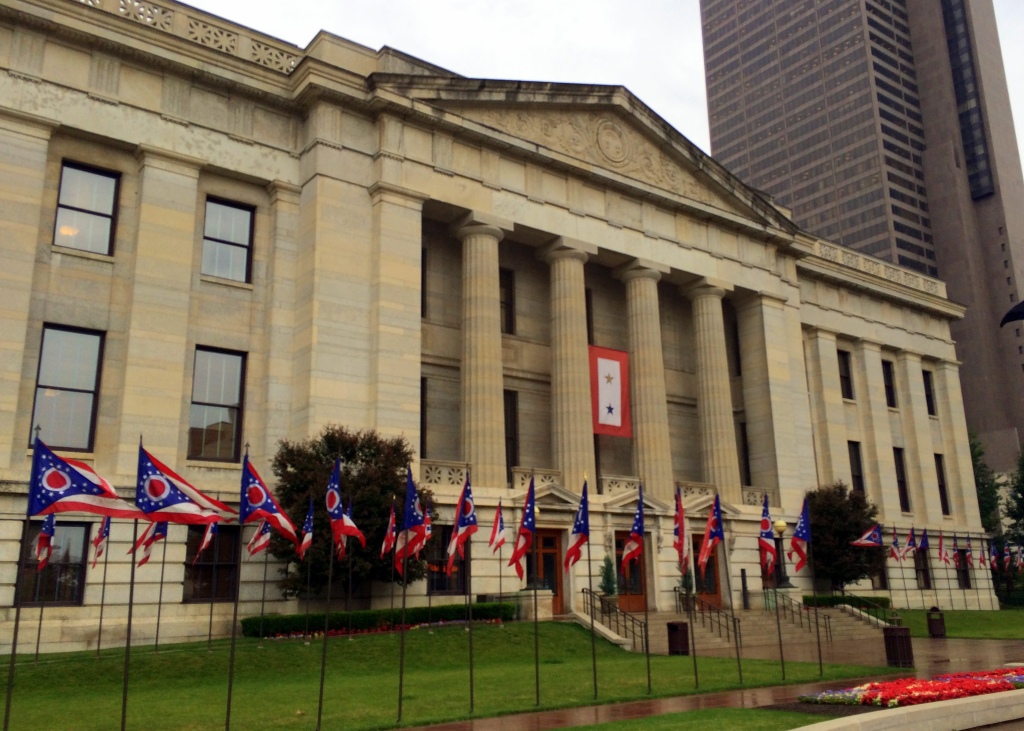 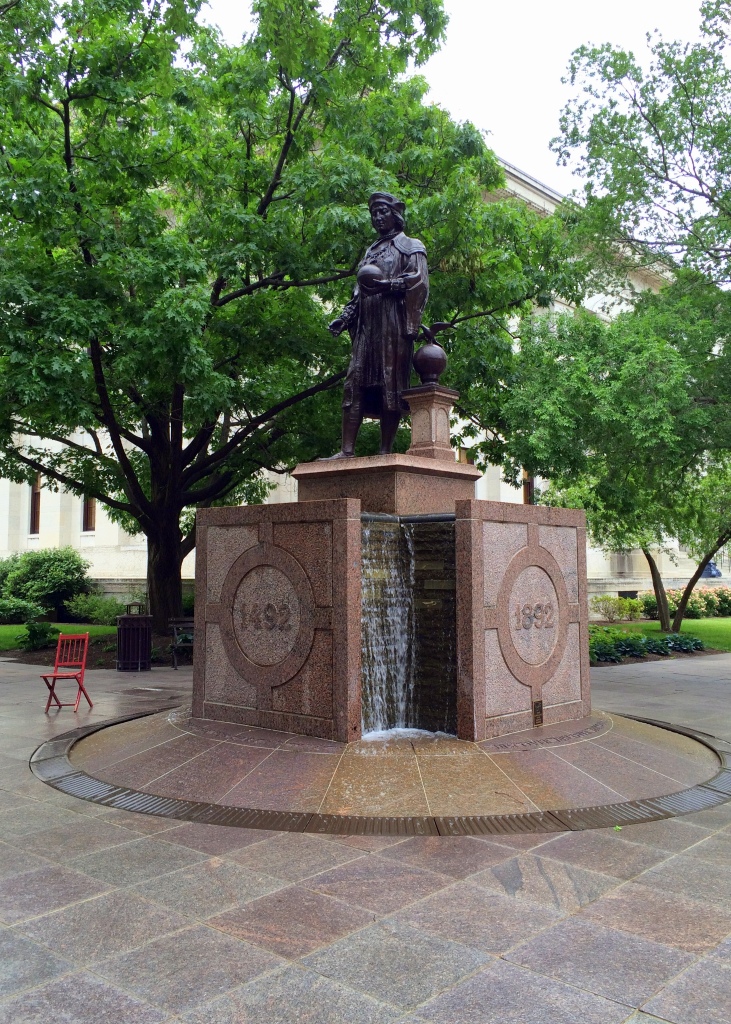 This entry was posted in Historic Buildings, Presidential Sites, Sculptures and Statues. Bookmark the permalink.