A week ago, I was browsing through my bird list and wondering what species I’d never see again now that I live in Colorado. The two brief looks I’ve had at a Painted Bunting were both at Holla Bend National Wildlife Refuge in Arkansas in the heat of summer, which I’m in no hurry to experience again. I guessed it belonged on the list.

And then on Tuesday evening, someone found a male Painted Bunting on the feeders at Chatfield State Park, about an hour north of my house in the Denver suburbs. When it was seen again on Wednesday, I decided to go for it. I worked a full day and left around 3:00.

When I arrived at the feeders, two women were just leaving. They said the bird had been there minutes before. This was good news and bad news. Good because it meant the bird was still in the neighborhood. Bad because all day it had been showing up about every two hours.

I found a place where I had a good look at the feeders and waited. 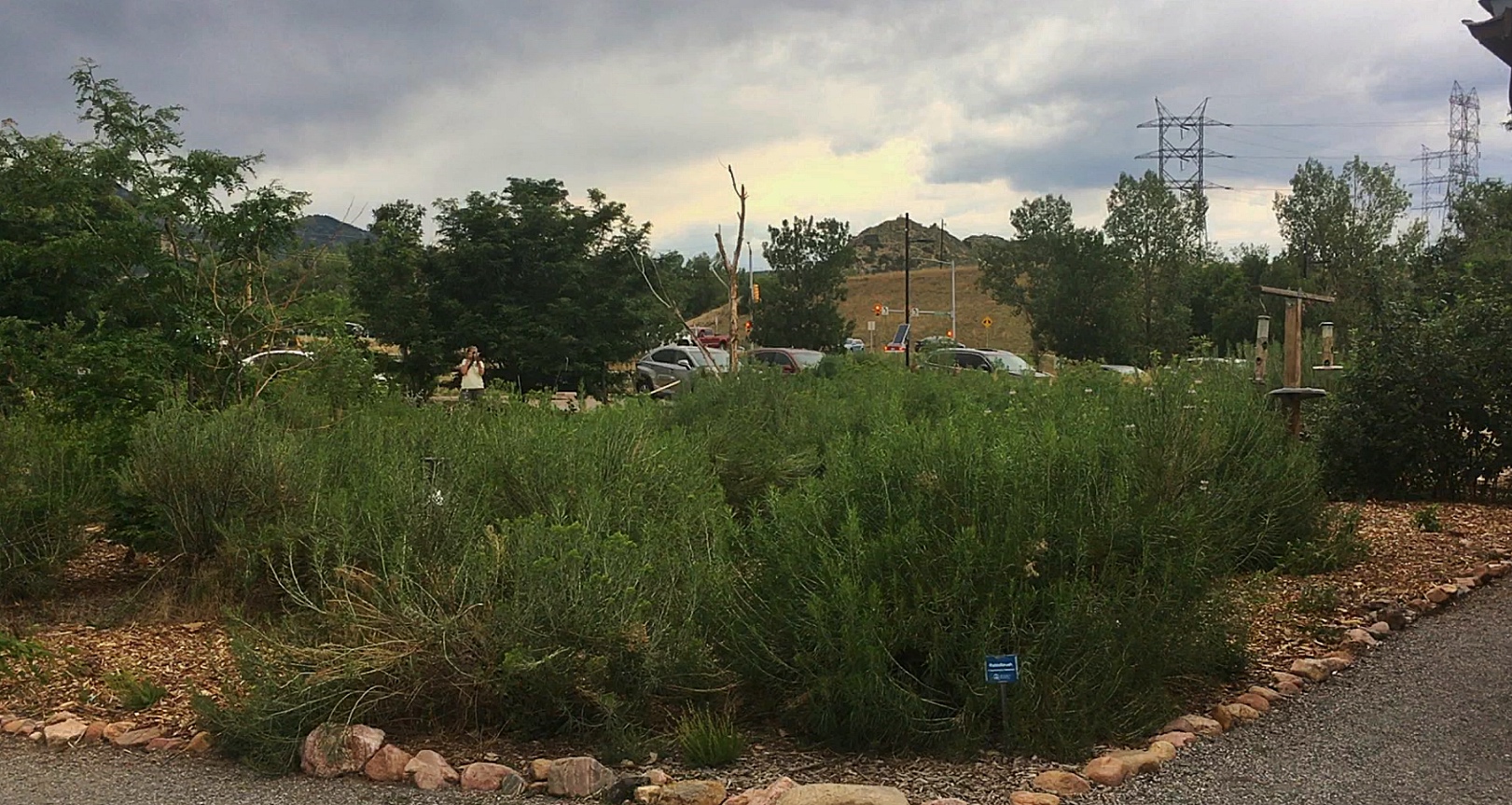 There were probably 15 other birders waiting with me. When there were no birds around, I watched them. One couple found a bench and sat patiently. A couple of guys with huge camera lenses (you can see one of them in the photo above in the light shirt) set up across the way. The one you can’t see actually walked over to the feeders at one point and bent the tray so it was best positioned for him to get a photo. As he walked past me, he explained what he was doing by saying that he was making sure there was seed in the tray, but since we could plainly see that there was, I wasn’t buying it.

A mom came by with her 10-year-old son. They weren’t very patient and kept pacing back and forth in front of me. I’m glad the kid is into birds, but he needs to learn to avoid quick movements and loud talking. His mom kept urging him to get up close to the feeders to get photos of the House Finches. Obviously, if he was there, the bunting wouldn’t come.

Two other women were also pacers, stalking back and forth around the area. I’m sure I saw just as many birds as they did just standing still. There were several Broad-tailed Hummingbirds in the neighborhood. At times, they came within two feet of where I stood. I also got a quick look at a Rufous Hummingbird.

This is why I do most of my birding in rural, less-popular areas, even if it means seeing fewer birds. Urban birding is for the birds.

An old man and woman wandered up and unlocked the building in front of me. The woman walked to the wall next to the feeders and tried to flip a switch to turn on the inside lights. She was there messing about when someone called out “Here it is.” I got a very quick glimpse of the Painted Bunting in the dead tree also visible in the photo above. It then flew down into the bushes beyond the feeder. The old woman was still messing about, so all I could see of the bunting was this. 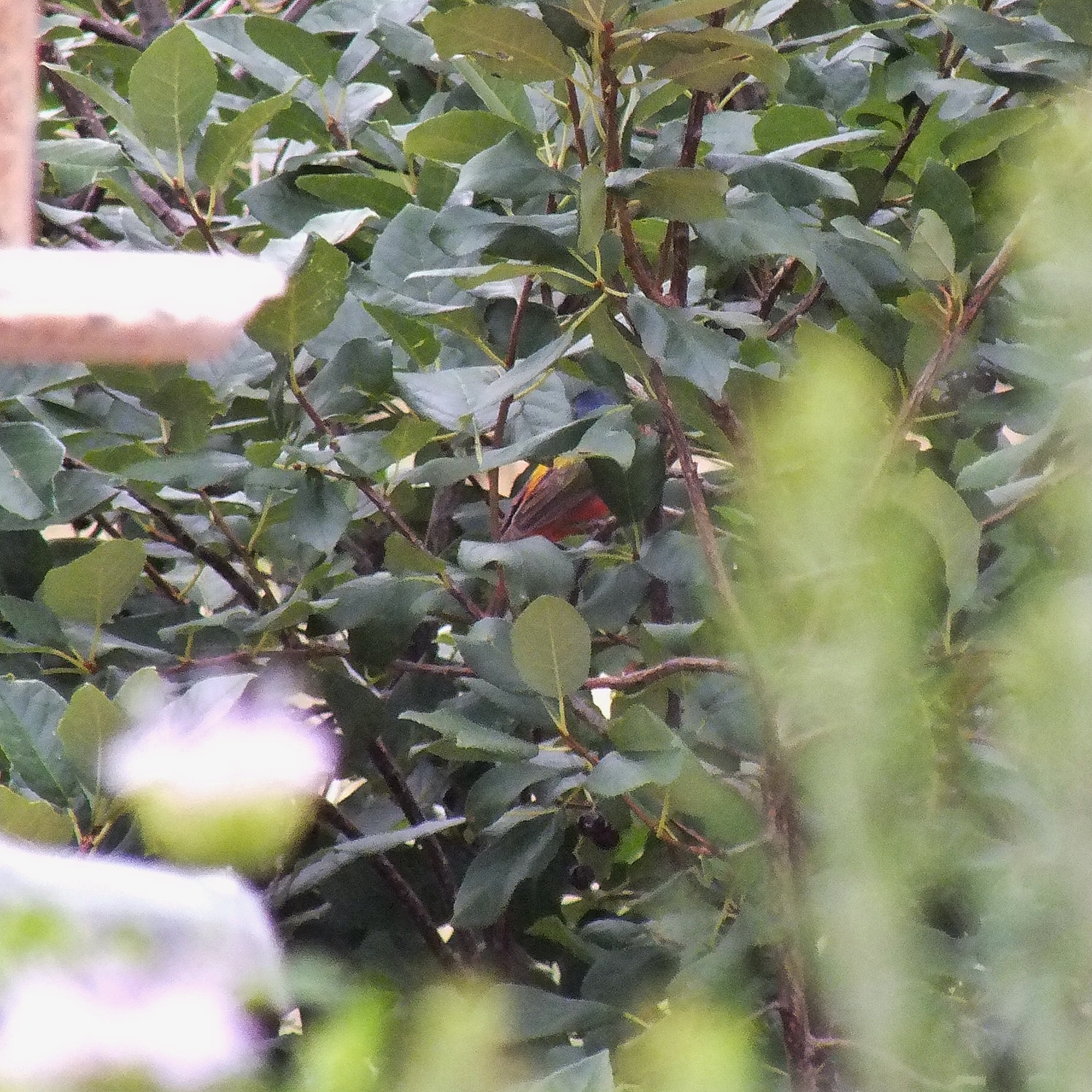 The woman had no idea that she was messing things up for all of us, but the bird was patient. Moments after she finally moved away, the bird came out. 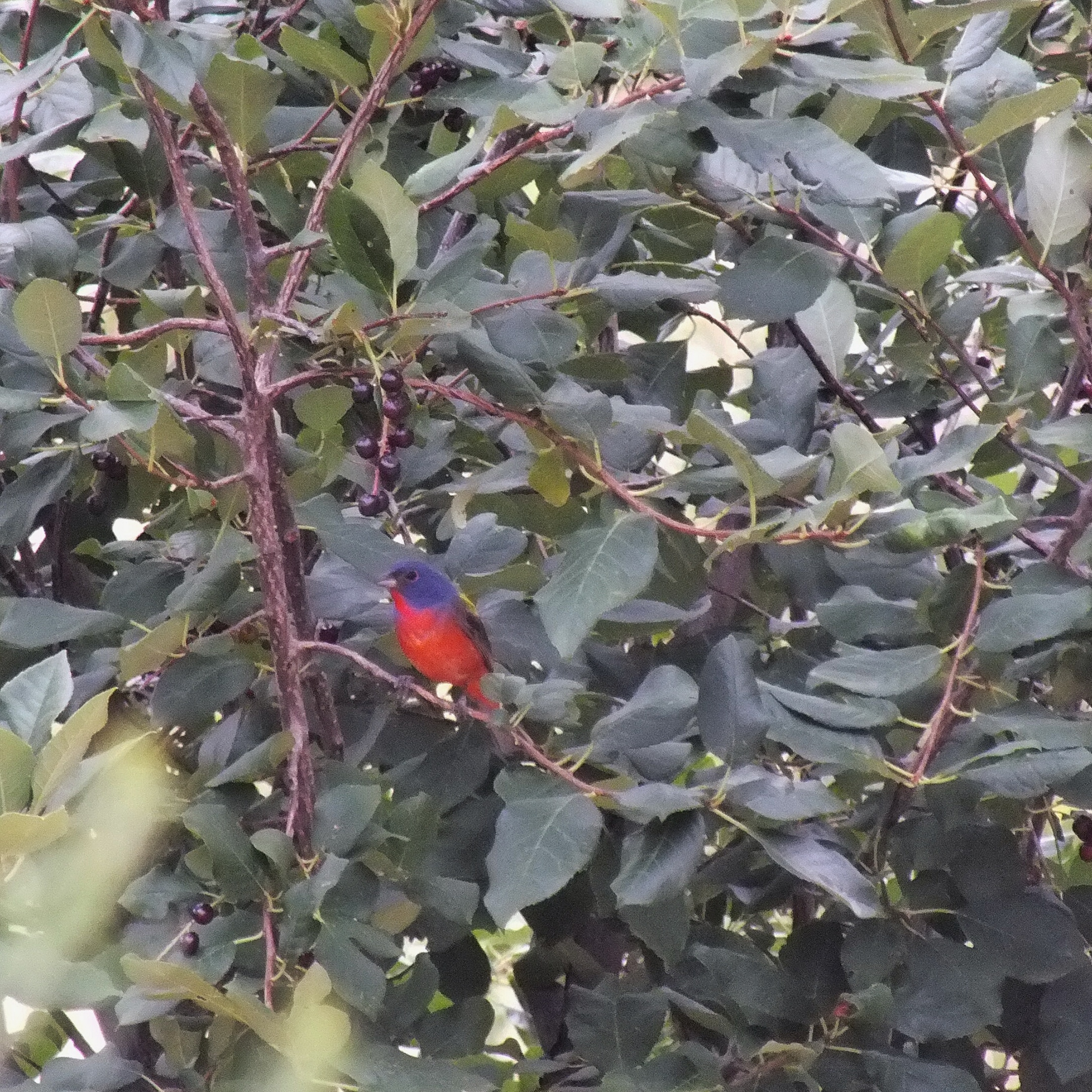 From there it flew to the feeder where it hung around and gave us all good looks for about five minutes before flying off to the south. 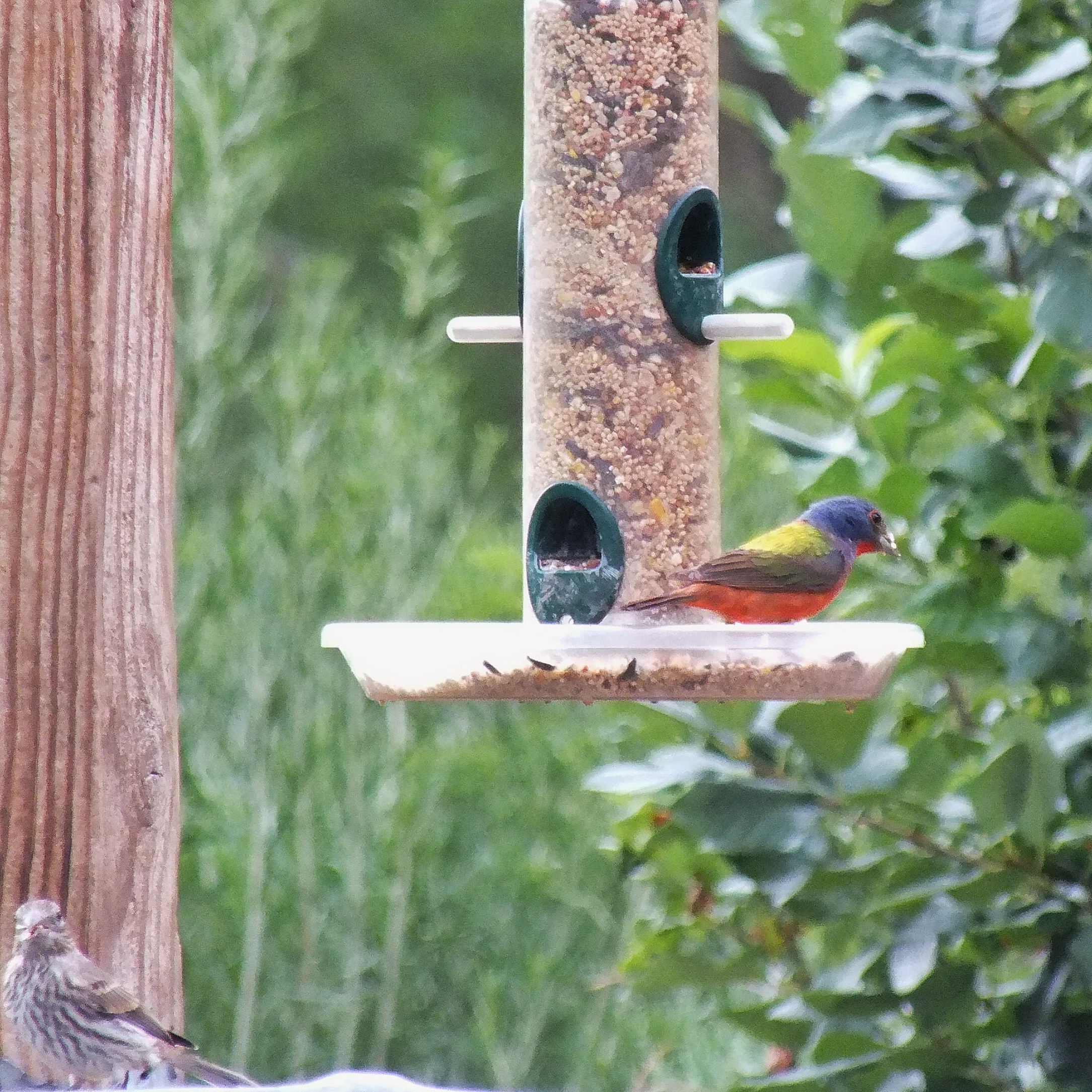 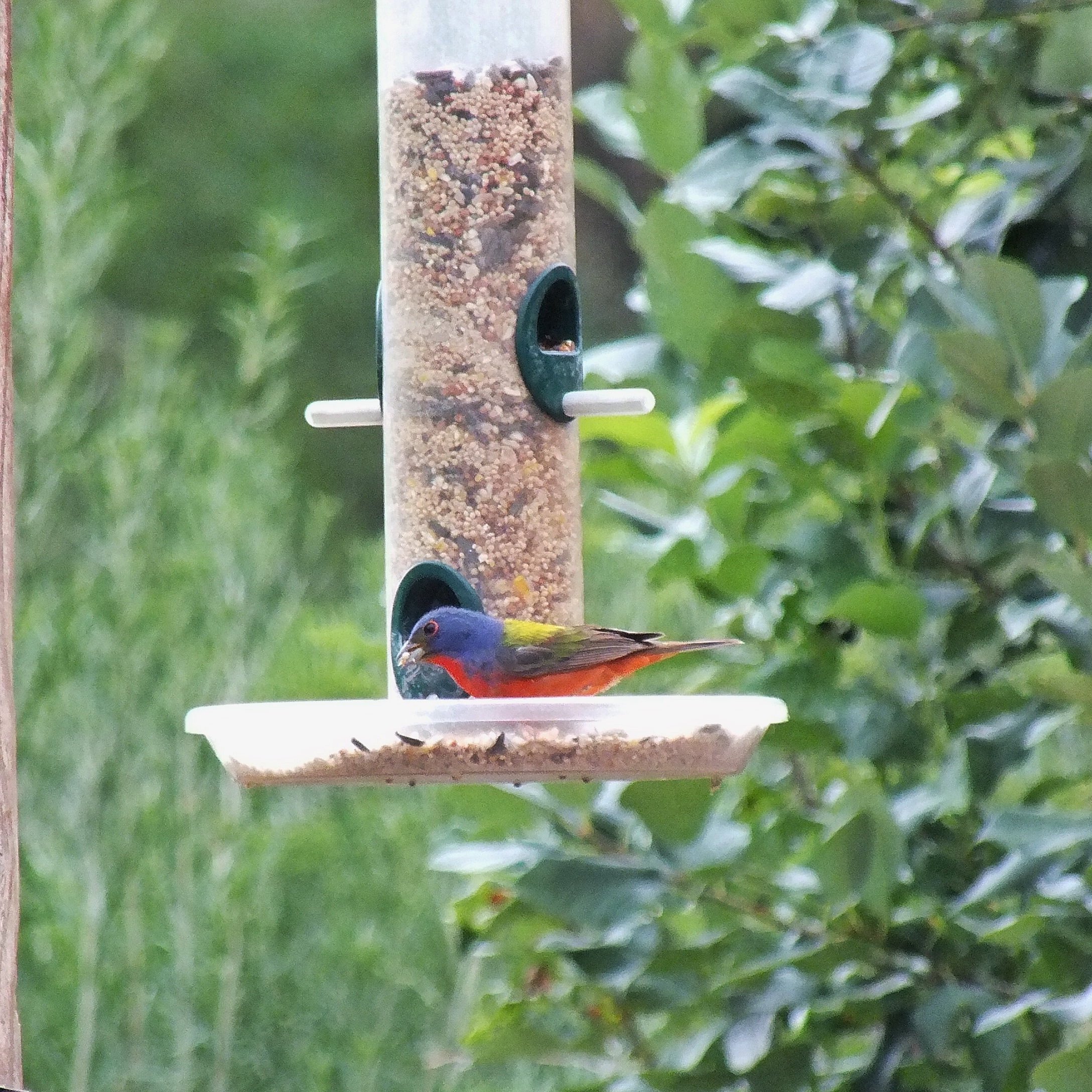 I drove home on Route 105 through a very active lightning storm. I got home around 7:00. It was a long wait and a longish drive, but worth it. This was a much better look than I’d ever gotten in Arkansas.