This wasn’t a lifer—I saw one in Sabino Canyon outside Tucson in 1984. But that was 36 years ago, and that’s a long time. I believe this is only the fourth one ever seen in Colorado.

A male Pyrrhuloxia (pronounced PEARhaLOXia) was discovered during yesterday’s snowstorm at a feeder in a blue collar neighborhood in Denver. It was seen again today, but I didn’t relish the thought of driving into the city. But the bird stuck around and I got a little restless in the afternoon, so I suddenly decided to go for it. I left home at 2:55 and got back at 5:20. 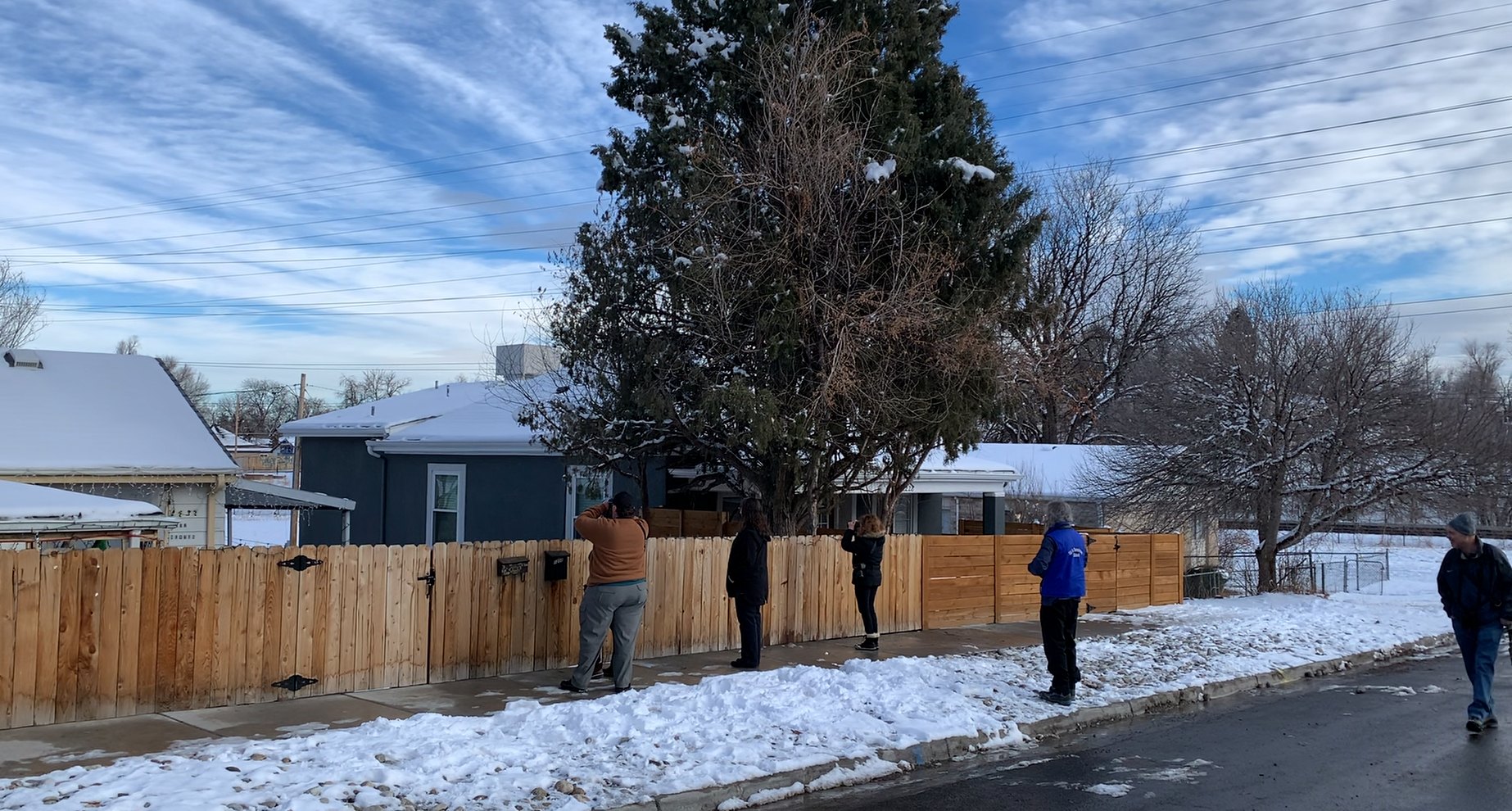 The bird was perched cooperatively in a tree along the street when I arrived. There were perhaps eight other birders in the neighborhood when I arrived. One of them pointed it out to me. I saw it less than a minute after I got out of my car. 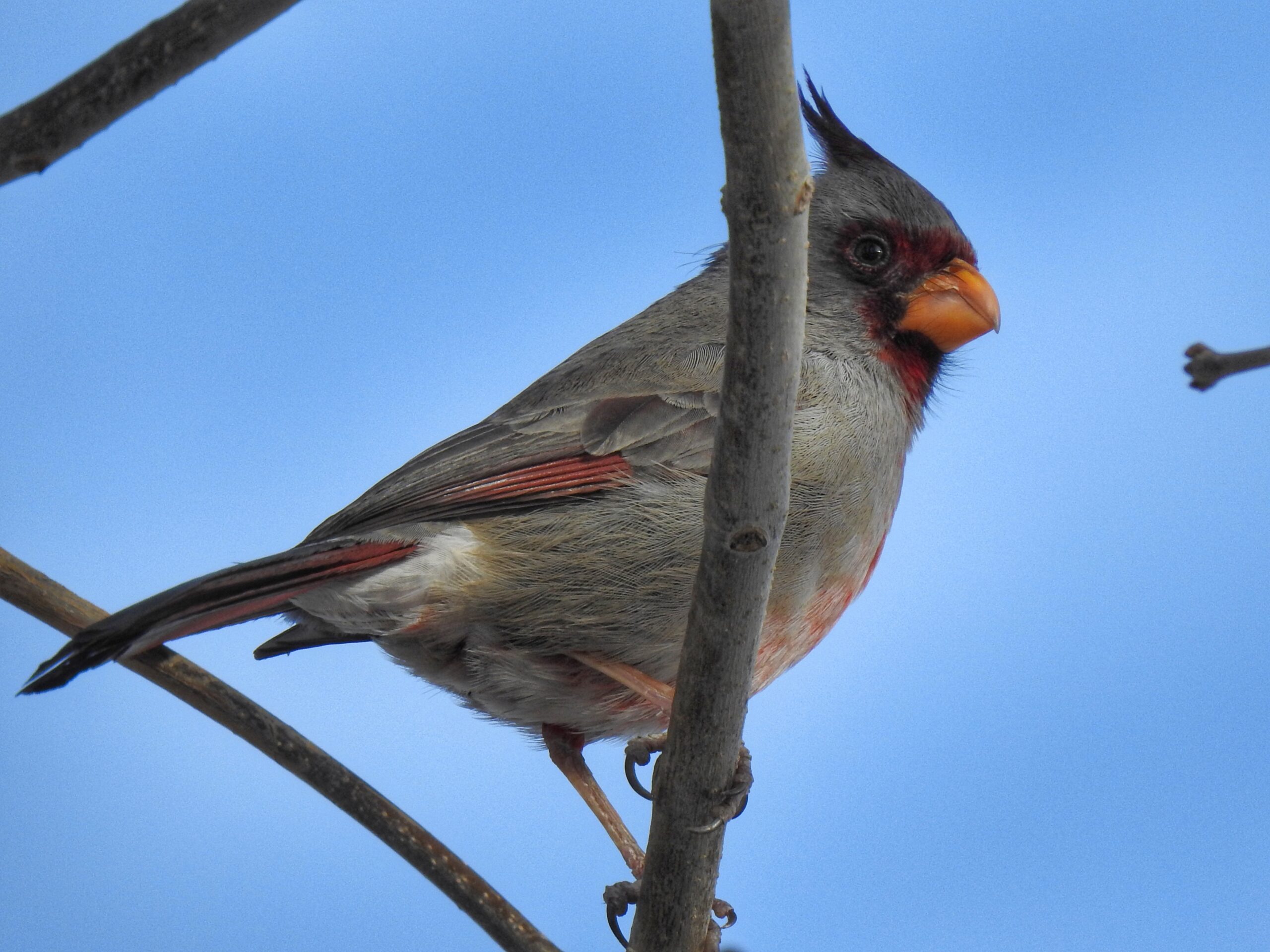 It flew down to a feeder pole, but didn’t stay long. 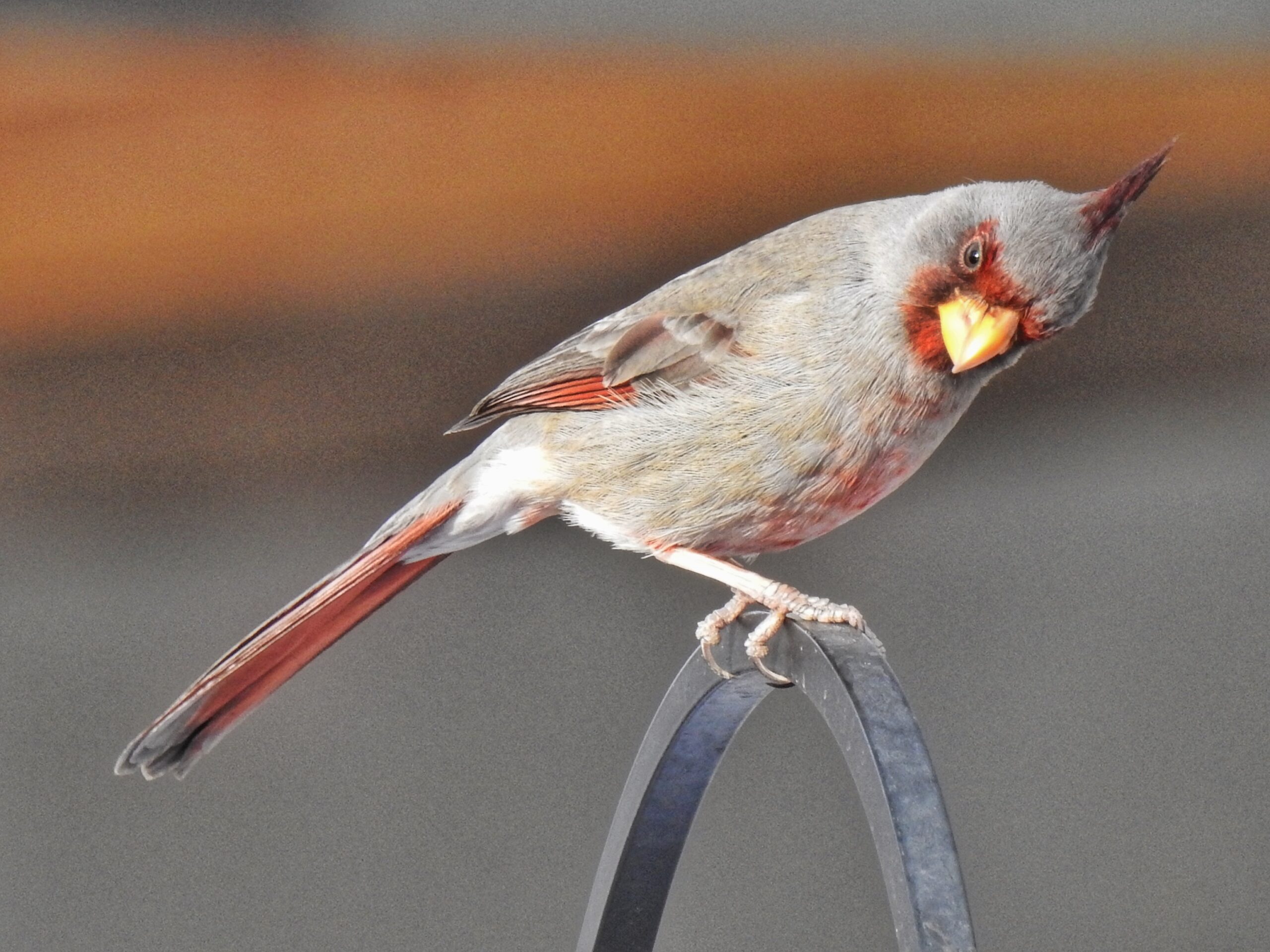 I next found it in a bush between two small houses and got to point it out to other people. 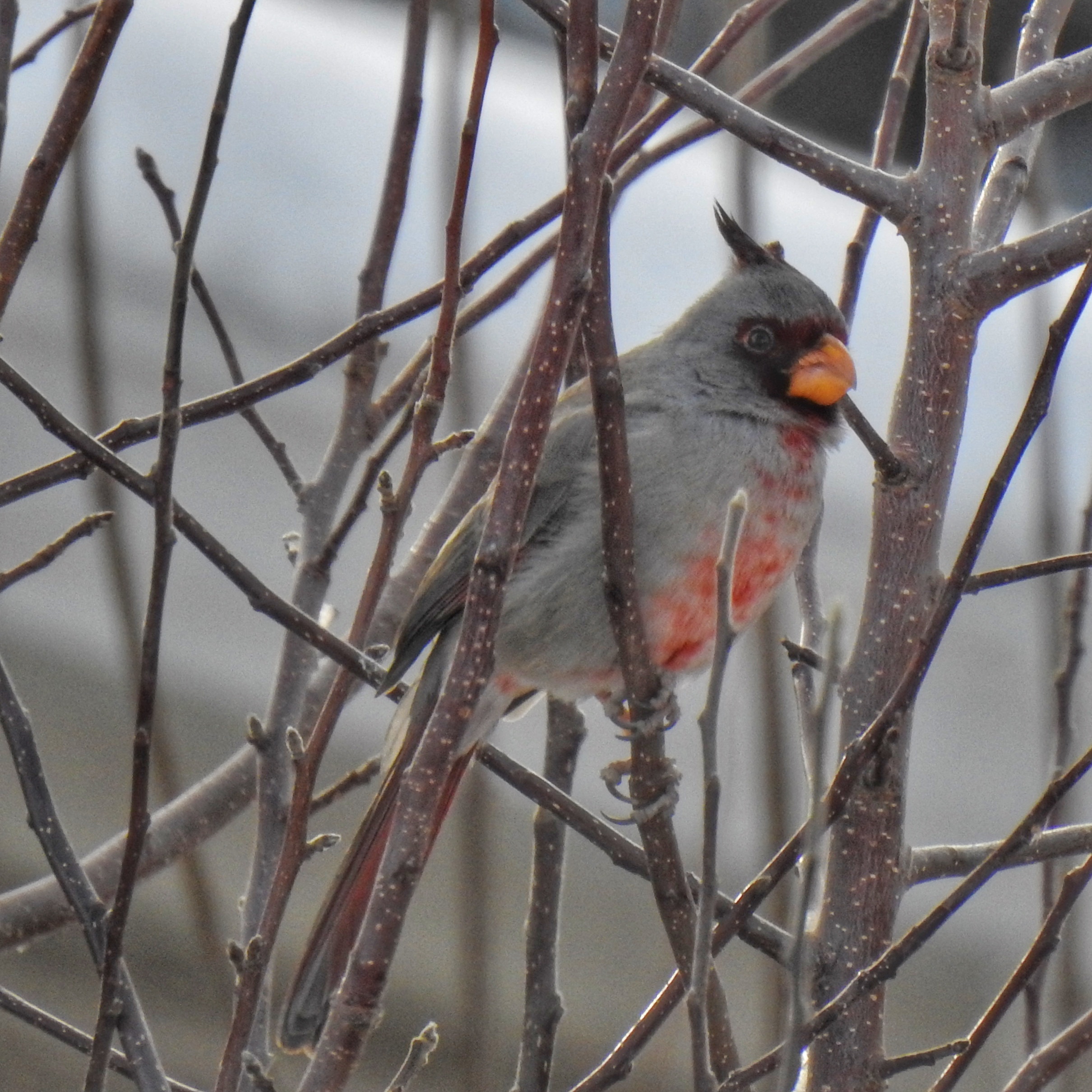 And then it disappeared. I wandered down an alley and looked through the slats of a white board fence. The Pyrrhuloxia was on a feeder, eating corn. I got the best shot I could through the slats. I had this view to myself until just before the bird took off. Another birder came by and I showed it to him and he had just barely long enough to see it. 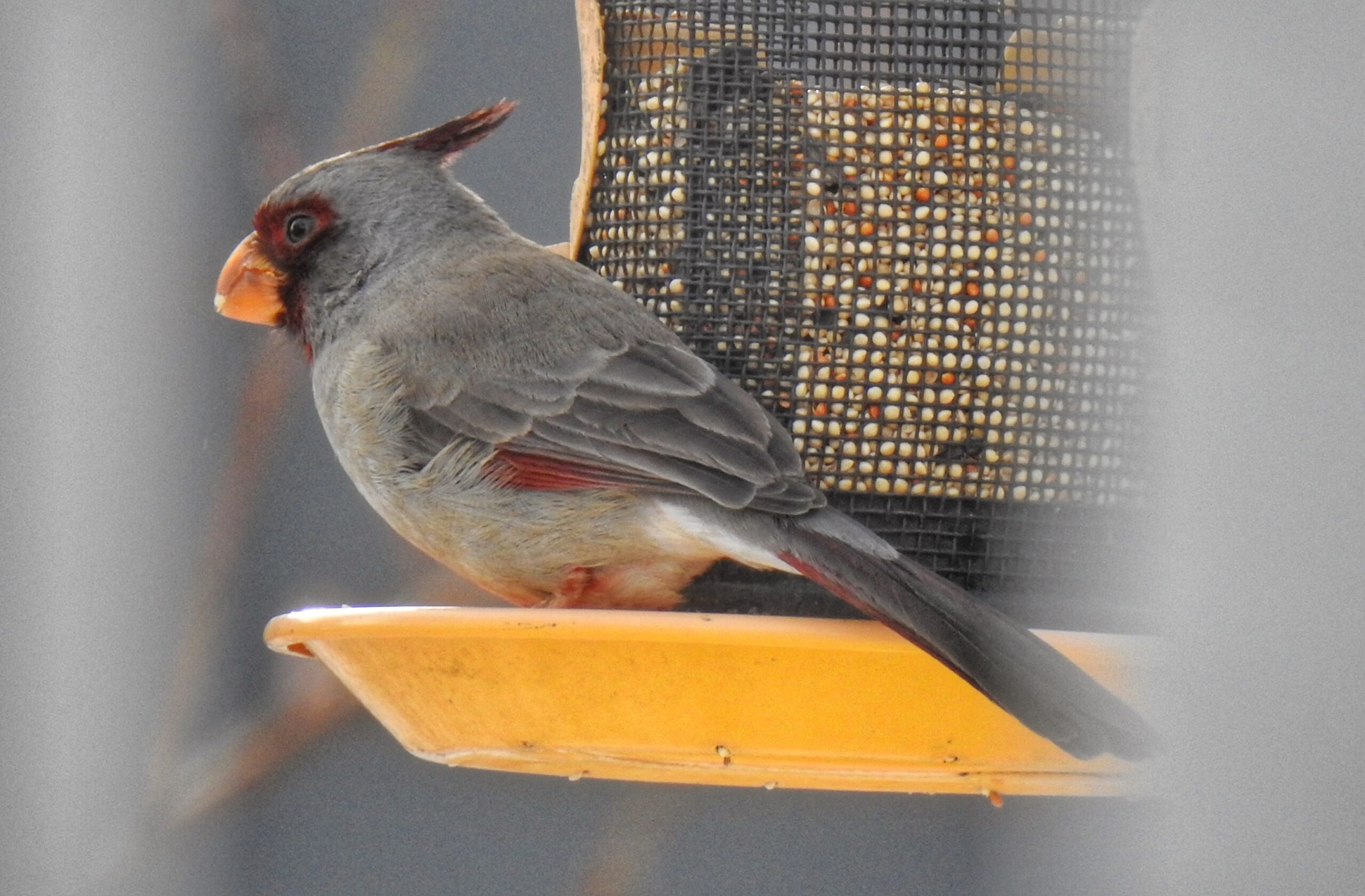 This one is a male. The female doesn’t have red on the breast or face, and just a few red splashes on the tail, wings, and crest.

If you’re wondering—and I know I was—where the name Pyrrhuloxia comes from, it used to be part of the Latin scientific name, from the Greek words pyrrhos (reddish or orange) and loxos (oblique—referring to the shape of its bill). I have no idea why it never got an English common name, like Desert Cardinal or somesuch.

It then flew off and wasn’t seen again during the remaining 15 minutes I stayed in the area. I don’t relish city birding, and I’d gotten the photos I wanted, so I headed for home.