turdus (a thrush) rufopalliatus (from rufus rufous and palliatus mantled)

The Rufous-backed Robin is a close relative of the American Robin. Its normal range is central Mexico, but it’s been known to wander into southern California, Arizona, New Mexico, and Texas upon occasion. It has never been reported as far north as Colorado—until January 18 when one was discovered at Denny Lake Park in Cortez—in the extreme southwestern corner of the state.

Cortez is a long way from home, and I had covid at the time, so I could only watch the eBird reports and wish. But the bird stuck around day after day—longer even than my virus—and since I’m now retired and fancy-free, I decided to go for it. But then I had to wait another four days for a snowstorm to rumble through and the roads to clear.

The couple who found the bird live locally and head to the park pretty much every day to see if it’s still there. They saw it on Sunday, so I knew it was still there. I was prepared to stay overnight in Cortez and look again on Tuesday morning if I struck out on Monday, but I really hoped I wouldn’t have to.

I left home at 6:30 this morning and drove down, arriving shortly after 1:00. Denny Lake is man-made, about four acres in size, and is bordered here and there by clumps of Russian olive trees. The robin has been eating the olives.

There were no other birders around, and I wasn’t sure where people normally saw the bird. I wandered up and down the shore without seeing robins of any sort. I did remember one report that mentioned a “periwinkle” house, so that’s where I was concentrating my efforts when another birder showed up.

He was a local birder named Eric who also has been coming by daily to check up on the bird. He said he knew its habits well, and escorted me around the area, pointing out all the places the robin has been seen in the past 20 days. We didn’t find it, and I was beginning to get that feeling—the one I get when I show up to see a rare bird a day after it’s last seen. But Eric told me not to get discouraged. He was confident it was around somewhere.

There was a clump of olive trees at the far north end of the lake where the bird has been spotted once or twice during the three weeks it’s been at Denny Lake. We wandered up there and were approaching the final olive tree when a robin-like bird flushed up from the ground under the tree and landed in a tangle of branches. I didn’t have a great view, but I could see it was the Rufous-backed Robin. My camera did not want to focus on the bird—it was convinced I was taking pictures of tree branches. This was the best shot I got before the bird flew down out of sight. 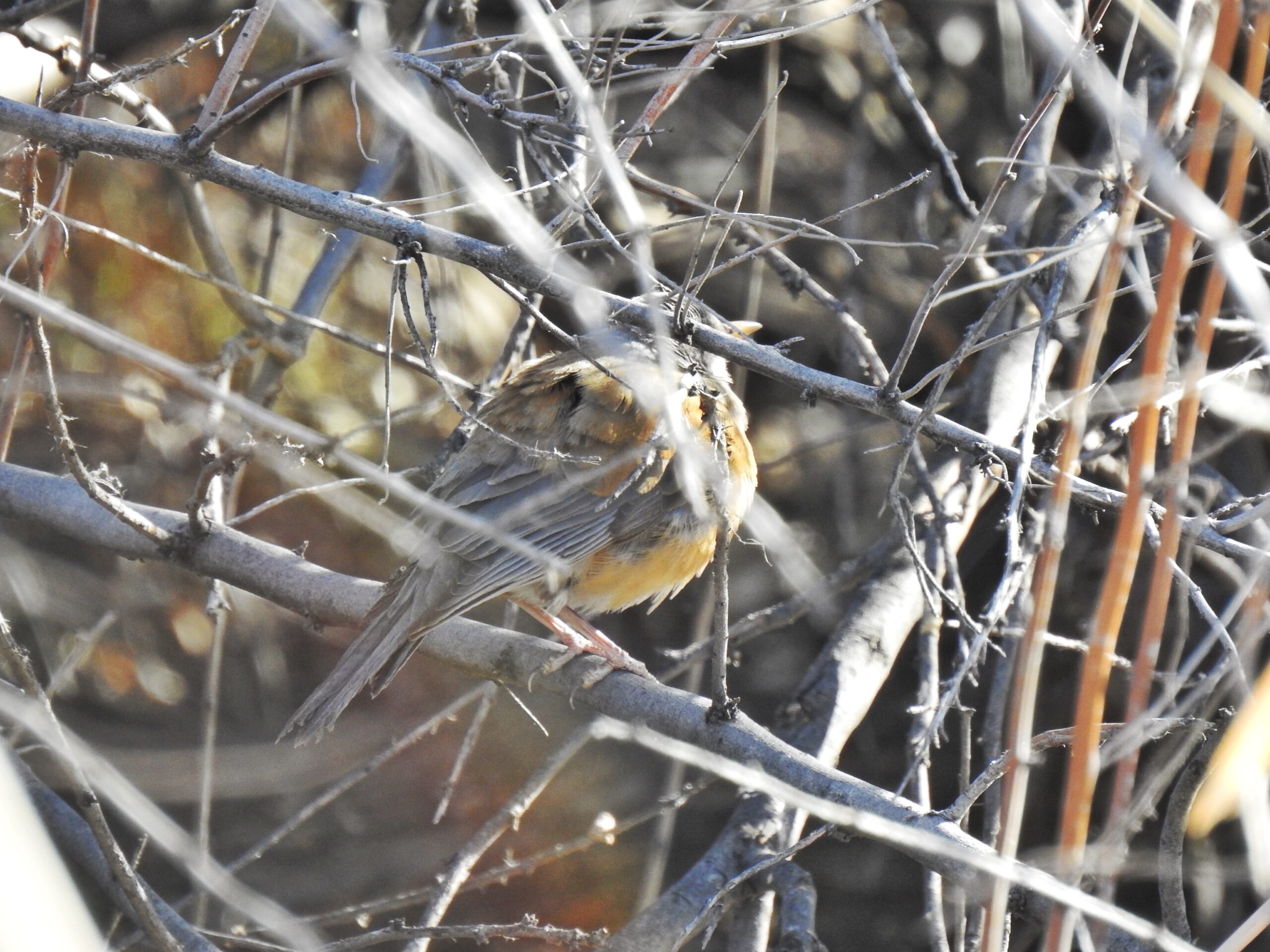 Five minutes later, Eric found it again, and this time it was more cooperative. It flew up into the higher branches of the same tree and foraged for olives for maybe five minutes—moving from branch to branch. I spent the time trying for a better photo. Here’s what I got. 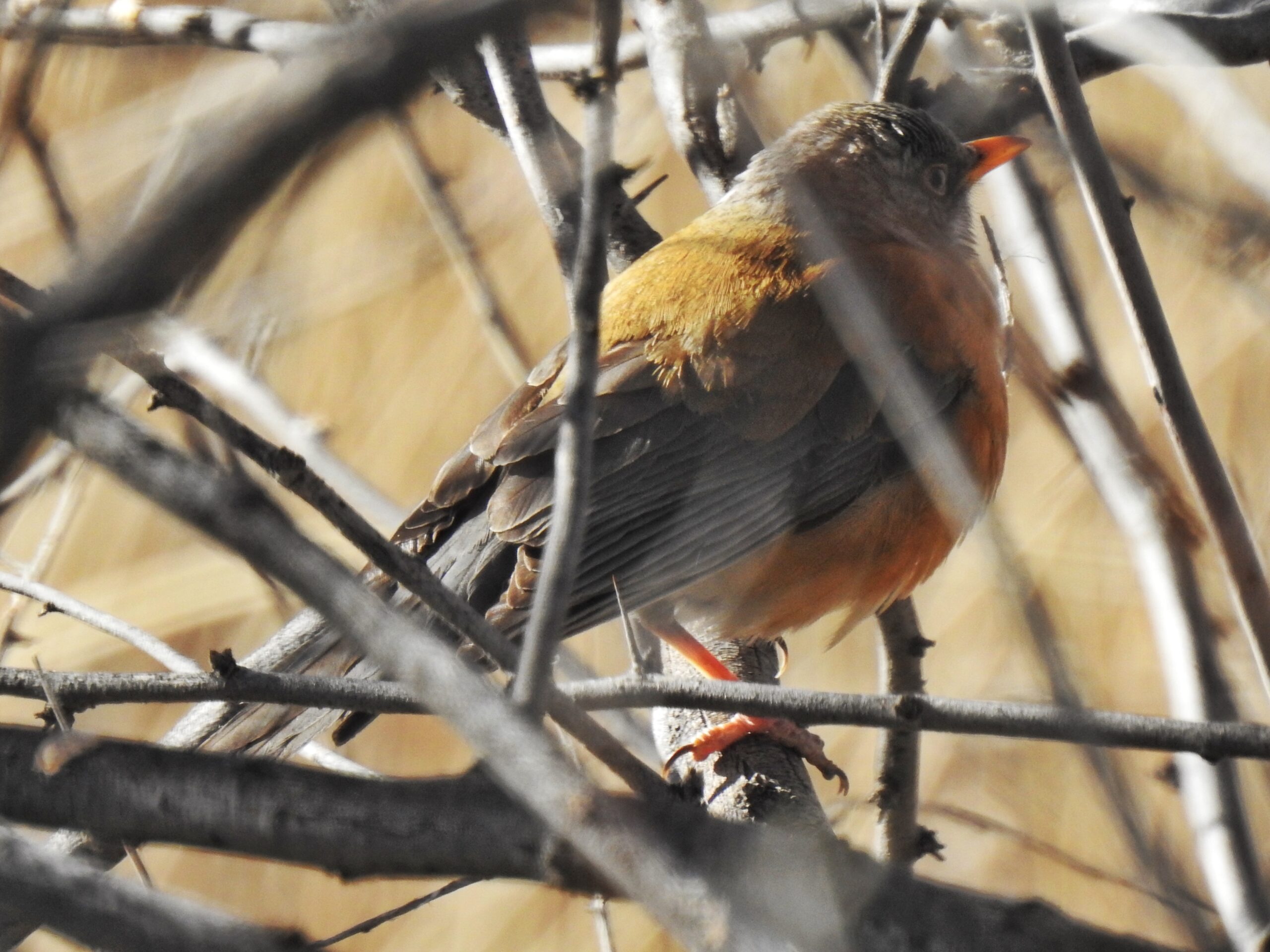 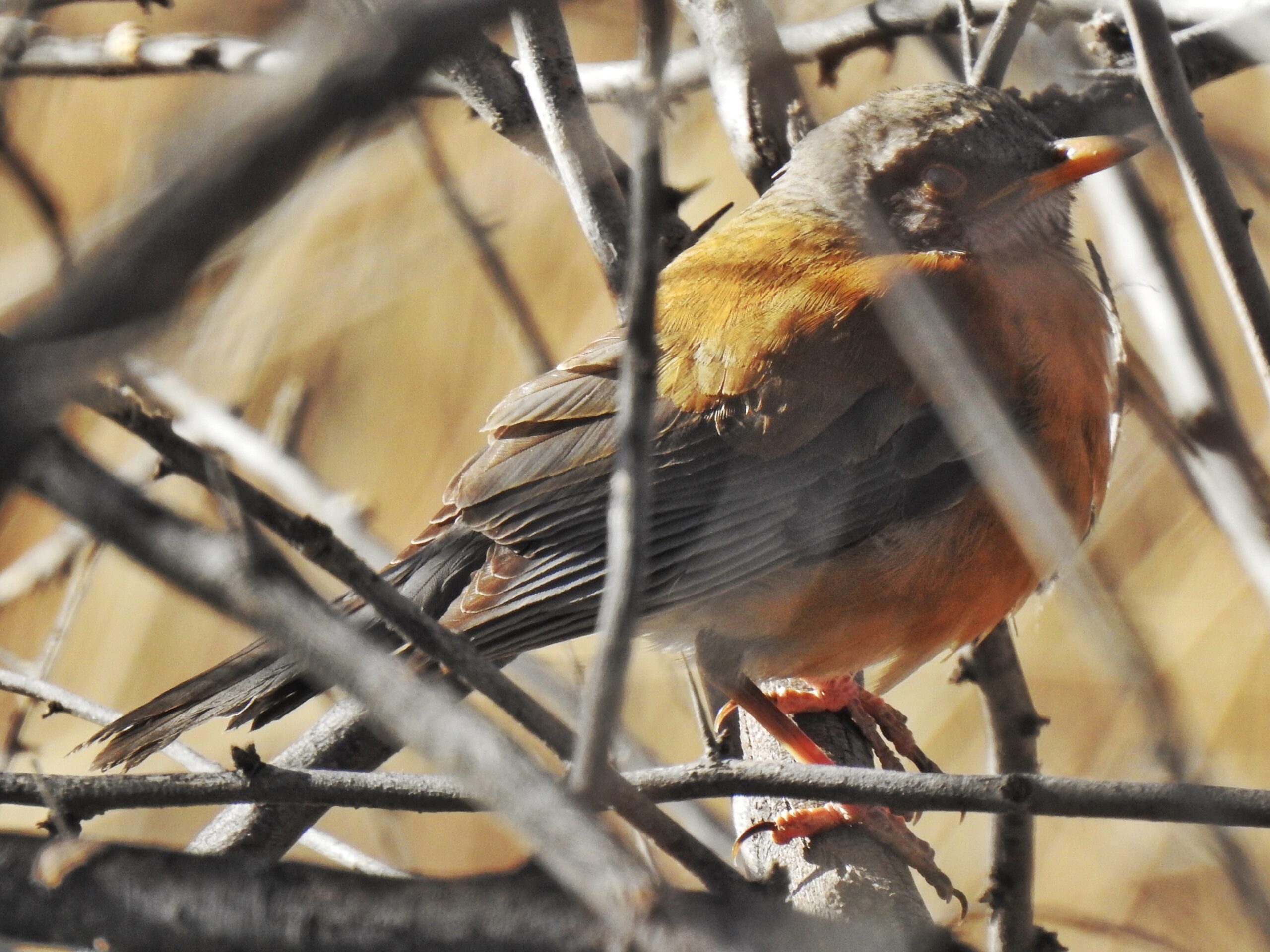 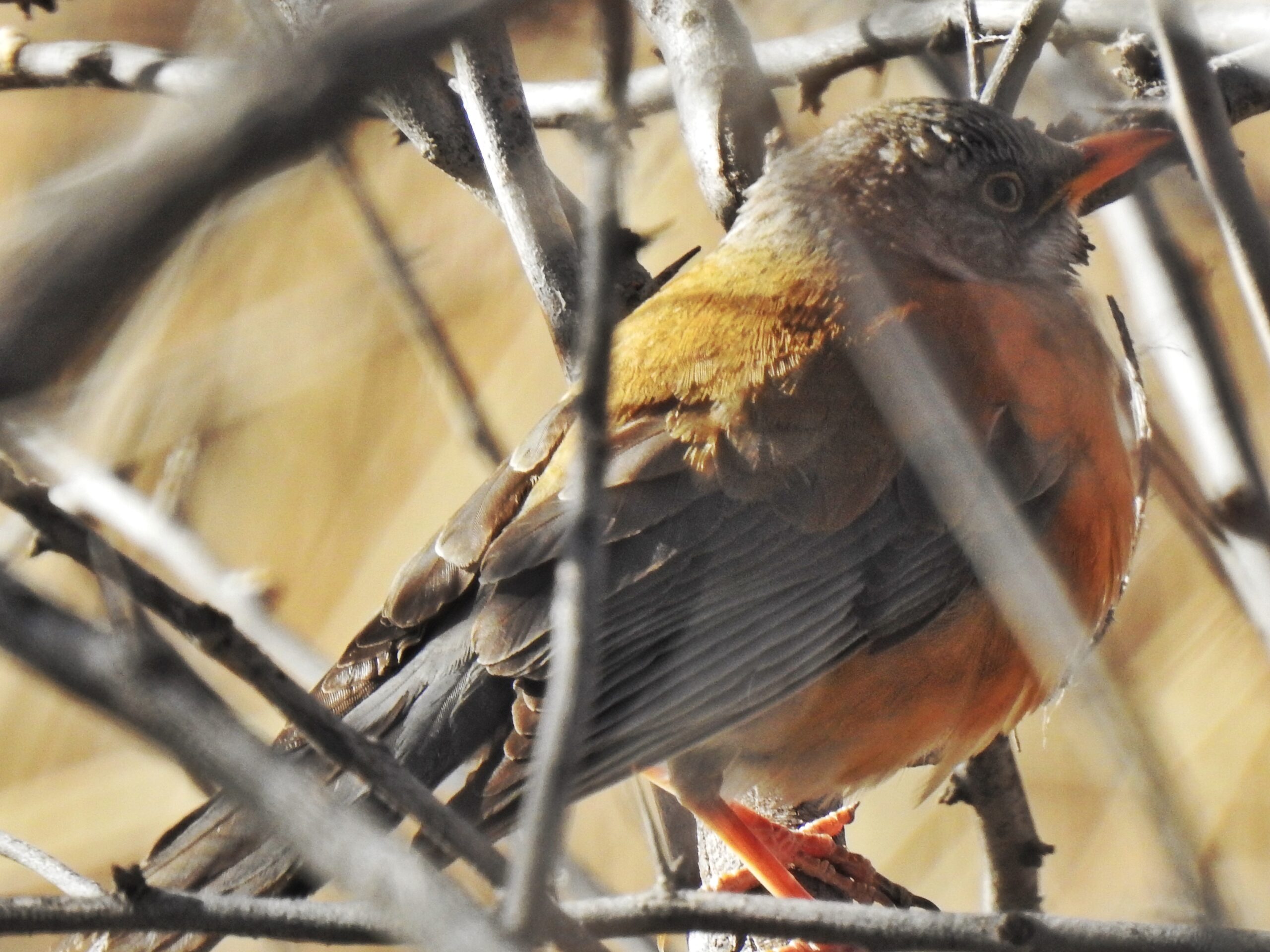 In several of the photos on eBird, the robin is standing on one leg. I wondered if it was injured, but apparently, this is just something it does sometimes—like in the photo below. 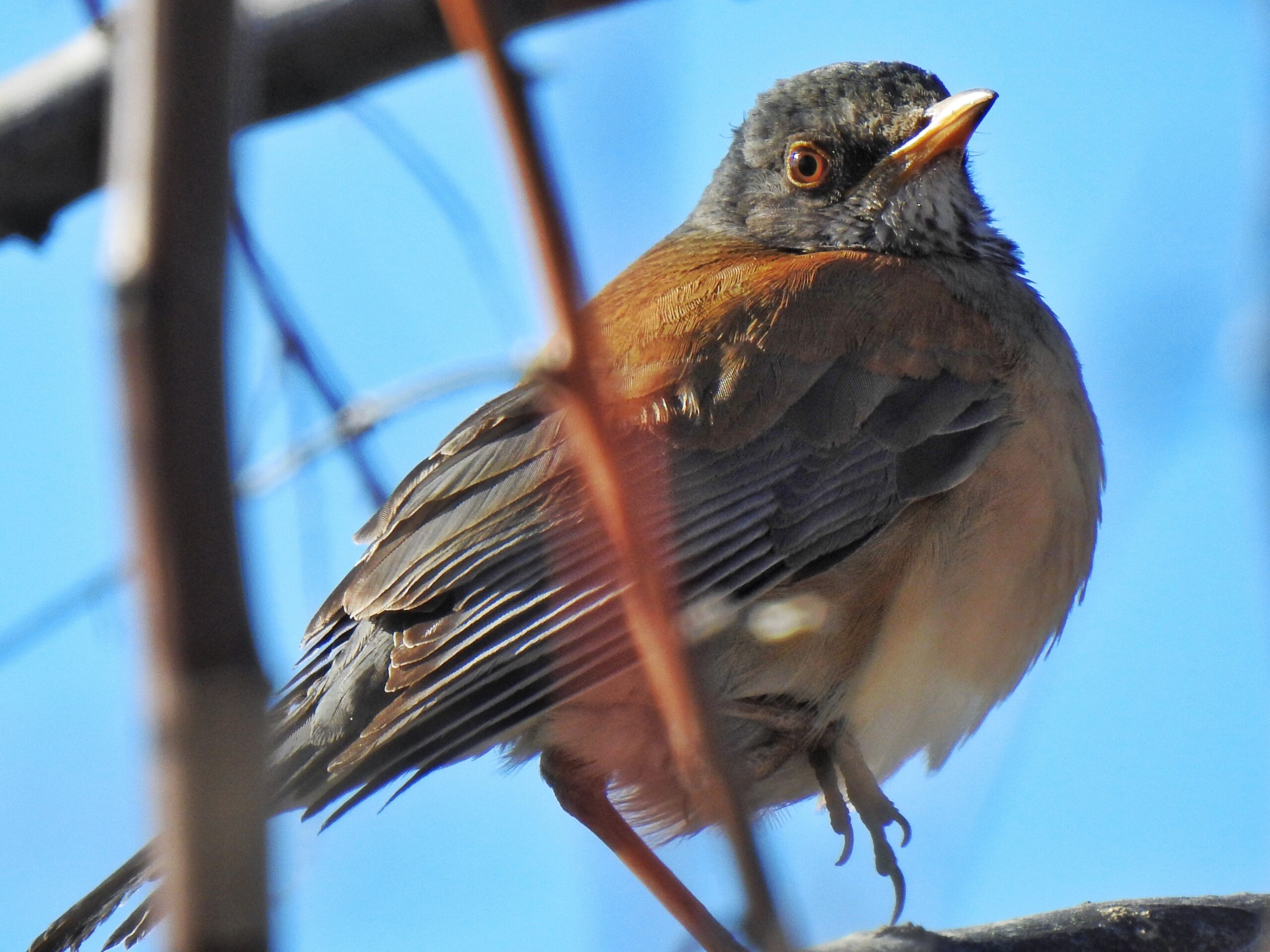 Perhaps 15 minutes after I first saw it, it flew out of the tree across the lake toward the periwinkle house. I had my bird and my photos, so I decided not to chase it again. I shook Eric’s hand and thanked him for his help. He was beaming—I think he enjoyed helping me find it as much as I enjoyed seeing it. He was also oddly excited that he could add Rufous-backed Robin to his “birds seen pooping” list. I don’t have one of those.

The Rufous-backed Robin has a similar shape and feel as an American Robin but is a little bit smaller and trimmer. Its head, nape, wings, and tail are slate gray. Its breast, at least on the bird I saw, was a paler orange than that of an American Robin. The back was a rich rufous. The eye, bill, and legs are orange. The white throat is streaked with black, but this didn’t really stand out to me on the bird I saw. You can see it a bit in a couple of the photos, but it’s not as noticeable as in the field guide pictures.

Here is my search pattern. We finally found the bird at the upper right—that clump of blue was me walking back and forth looking for an angle for a good photo. (The periwinkle house is under the “E” in “Lakeside.” I knew you were wondering.) 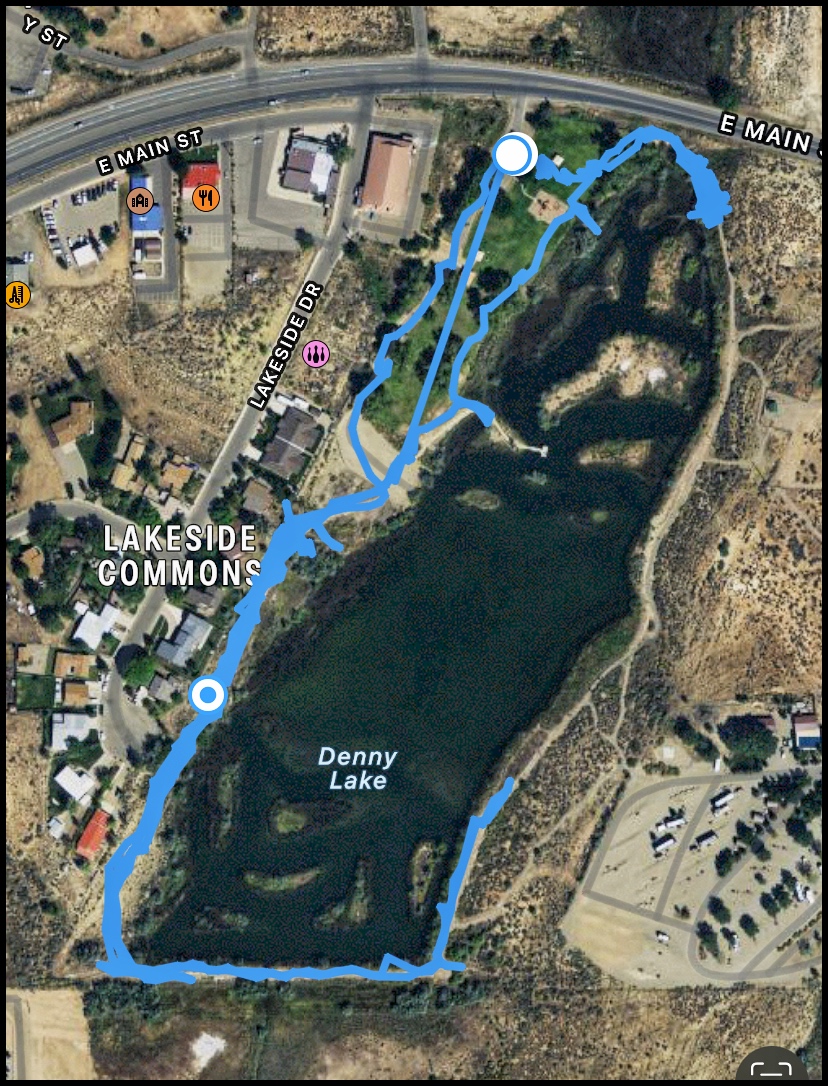 A photo of Denny Lake, although I took the picture before I saw the bird and didn’t pan as far to the north (left) as the olive tree where I saw it. 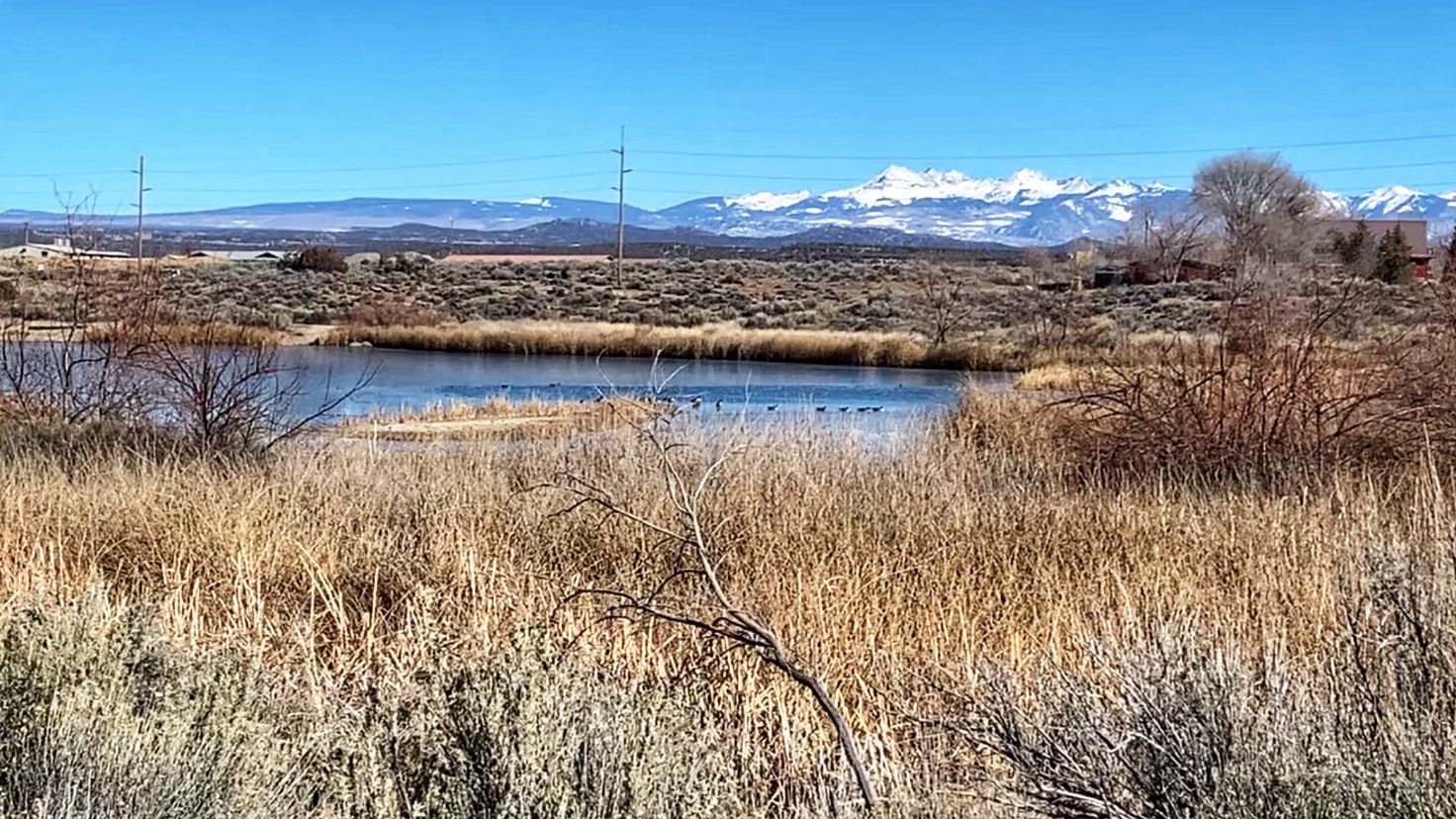 It was almost four by this time and still light out. I didn’t want to spend six hours in a hotel in Cortez, so I headed back east and ended up driving all the way home. I arrived shortly after 10:00 after having driven 736 miles in 13 hours, interrupted by four food/gas stops and a two-and-a-half-hour search for a bird. Silly, yes. But fun.

UPDATE: Eric and I were apparently the last people to see this bird. It couldn’t be found later on Monday or on Tuesday or Wednesday. This isn’t really an accomplishment, but it does make an interesting addition to the story of my 13-hour drive.