The Richard Nixon Museum didn’t open until 10:00, but the gift shop opened at 9:30. I went in and asked if I could carry the chair around with me. The people I spoke with were very friendly and gave me permission immediately.

I only spent about an hour in the museum. There was a lot to read, but I didn’t have time and figured I could get that information from books. I concentrated on the artifacts. 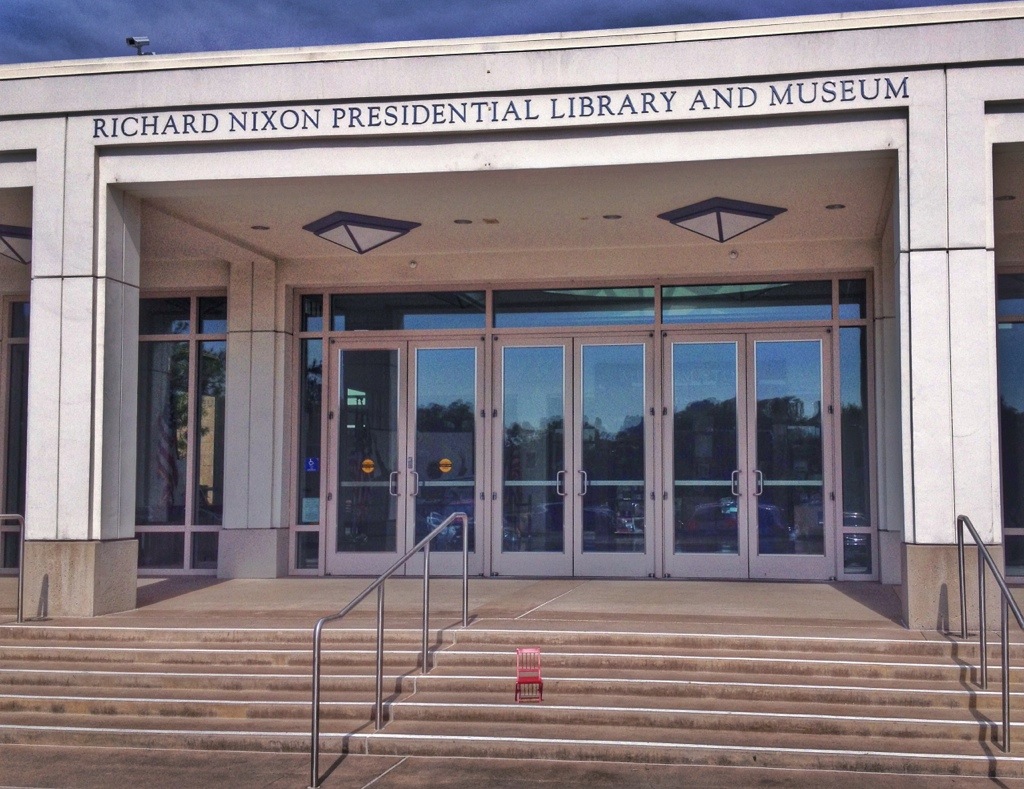 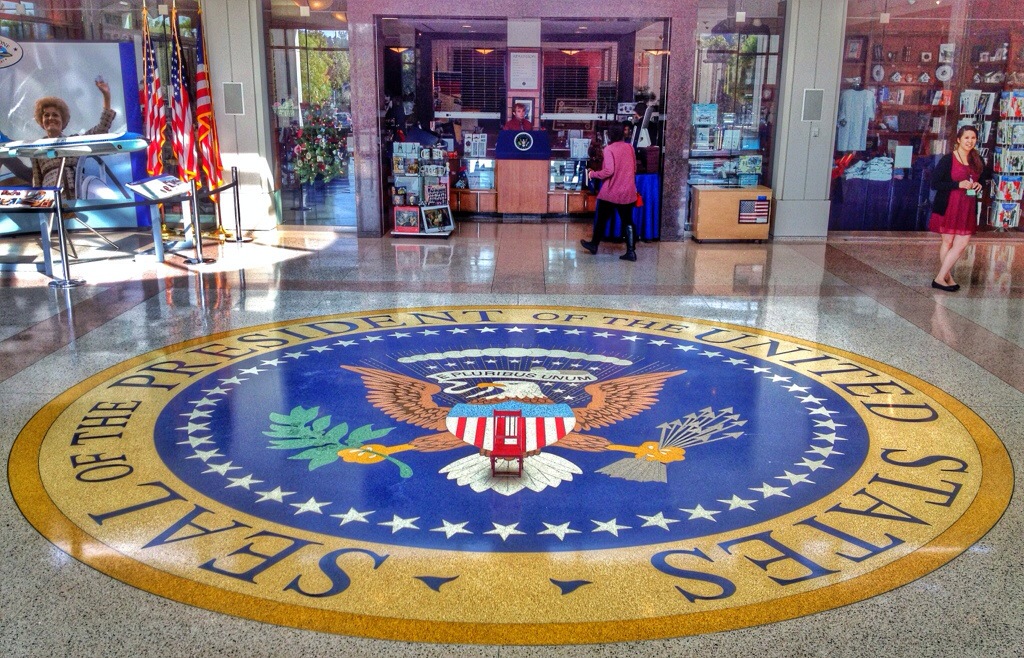 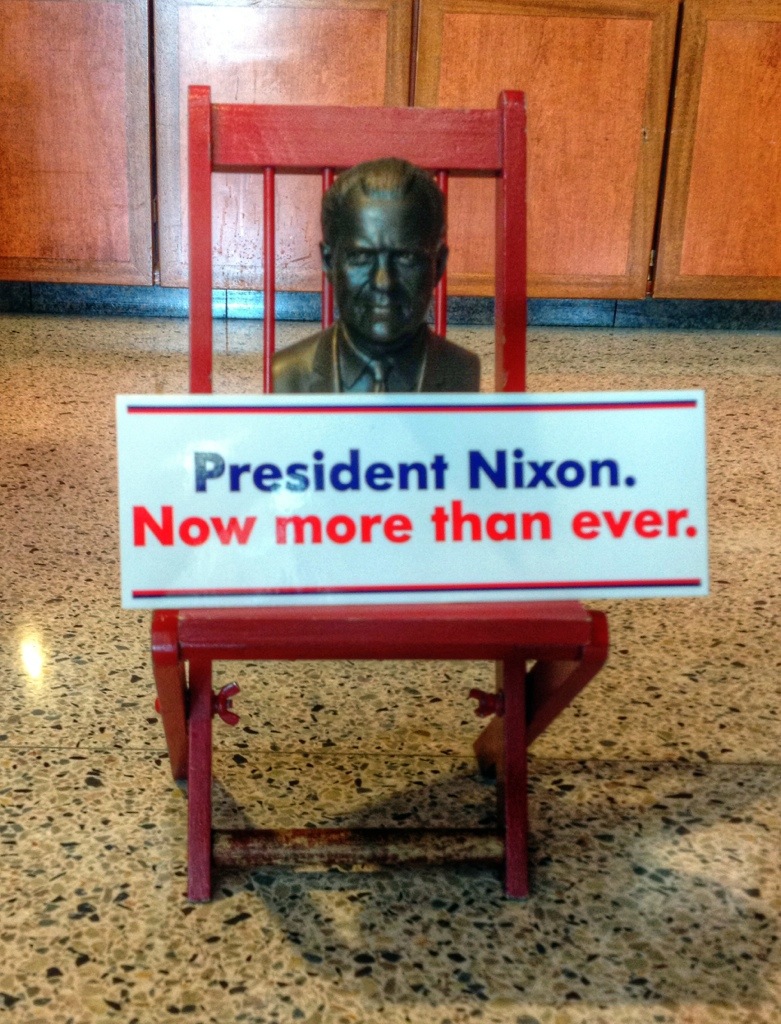 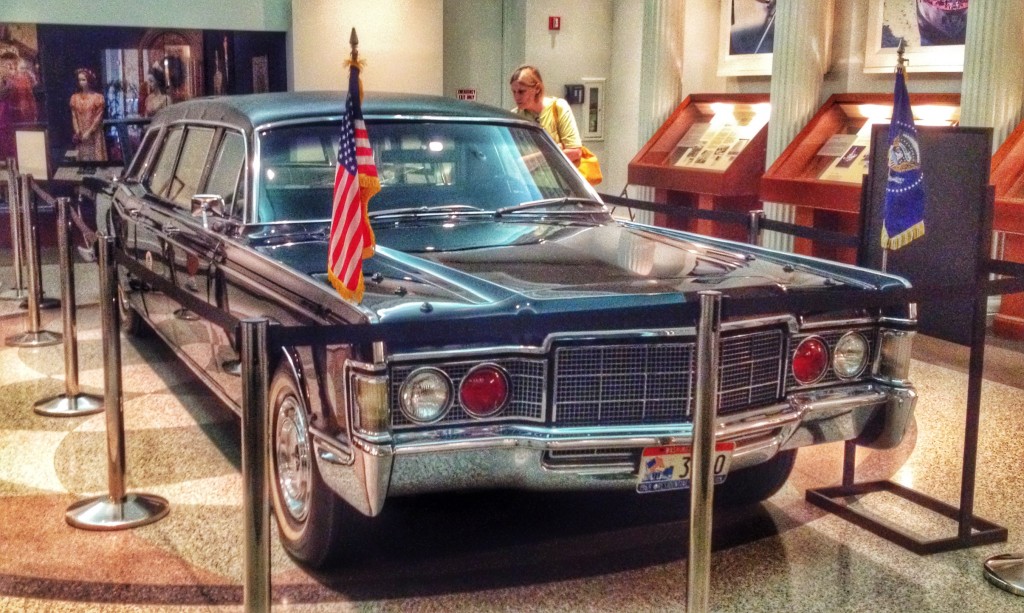 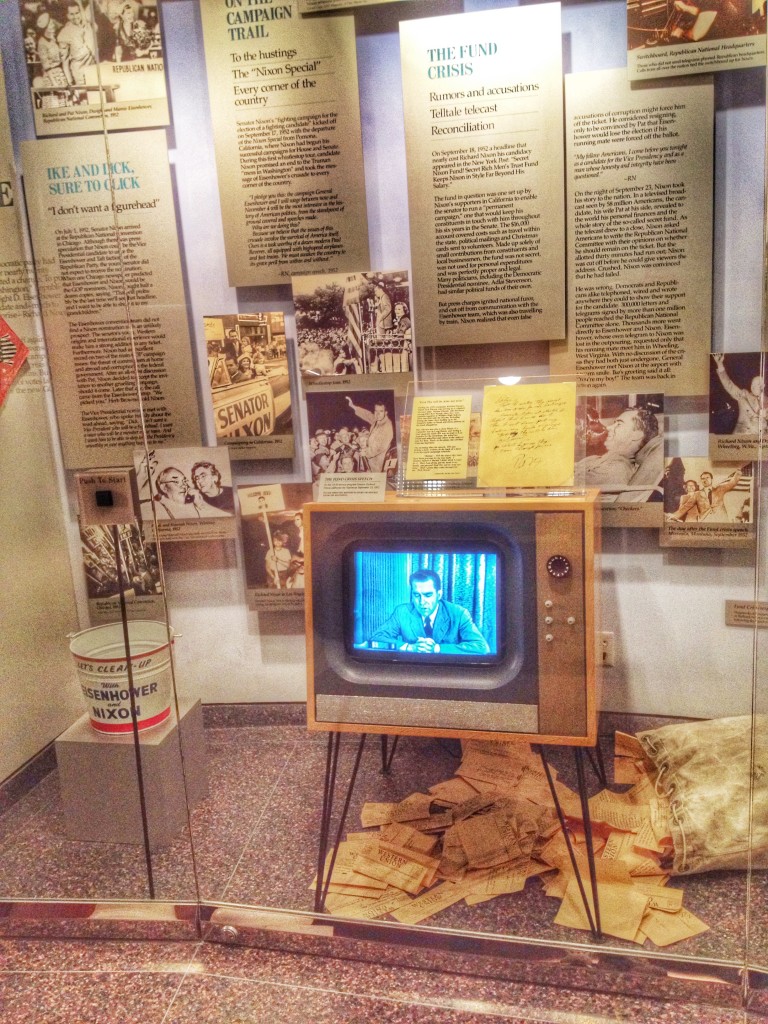 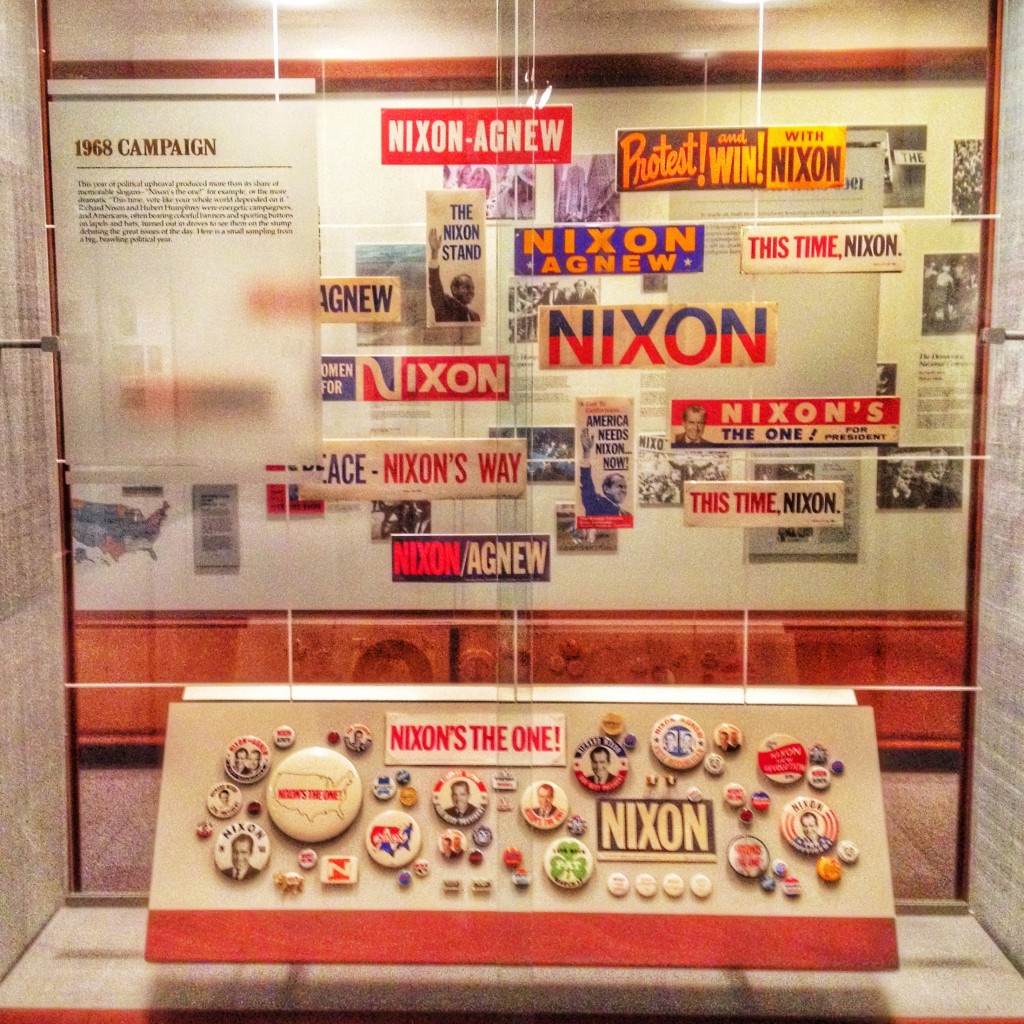 This necklace was a gift from Golda Meir. Notice how old it is. 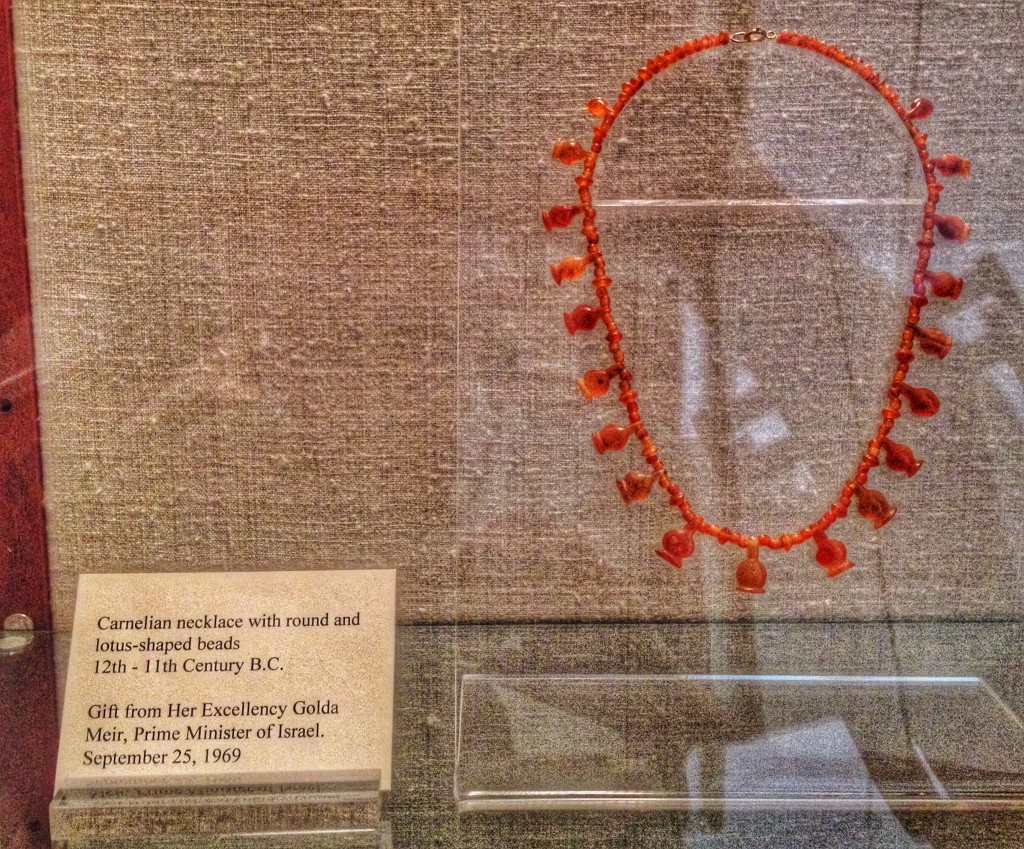 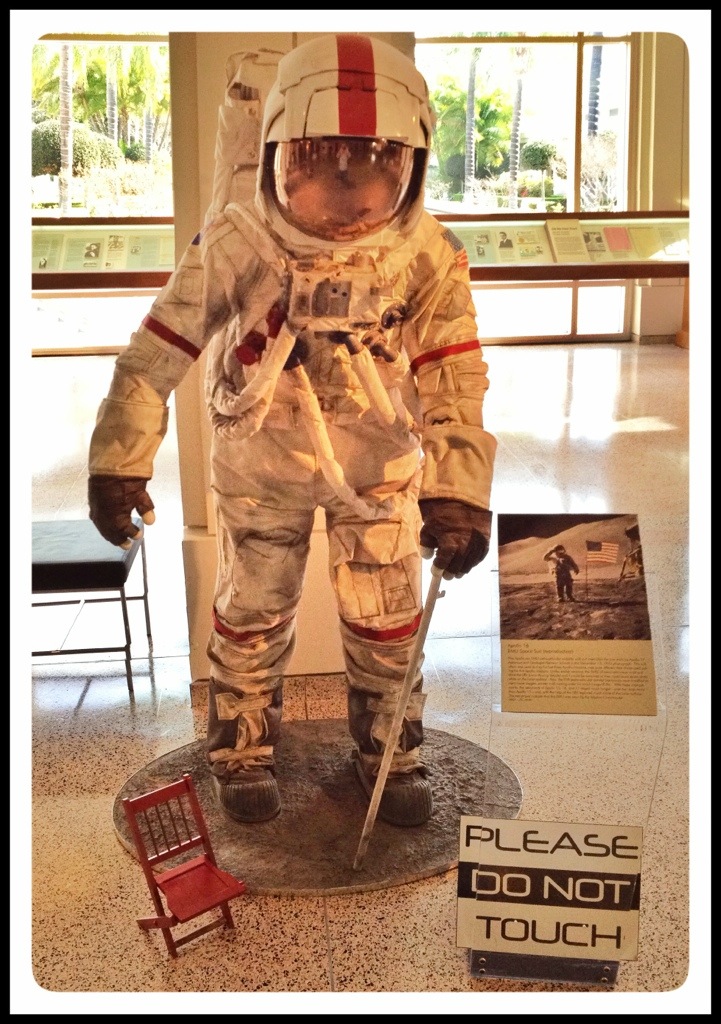 The Vice President’s chair from the Cabinet Room, used by Nixon during the Eisenhower administration. 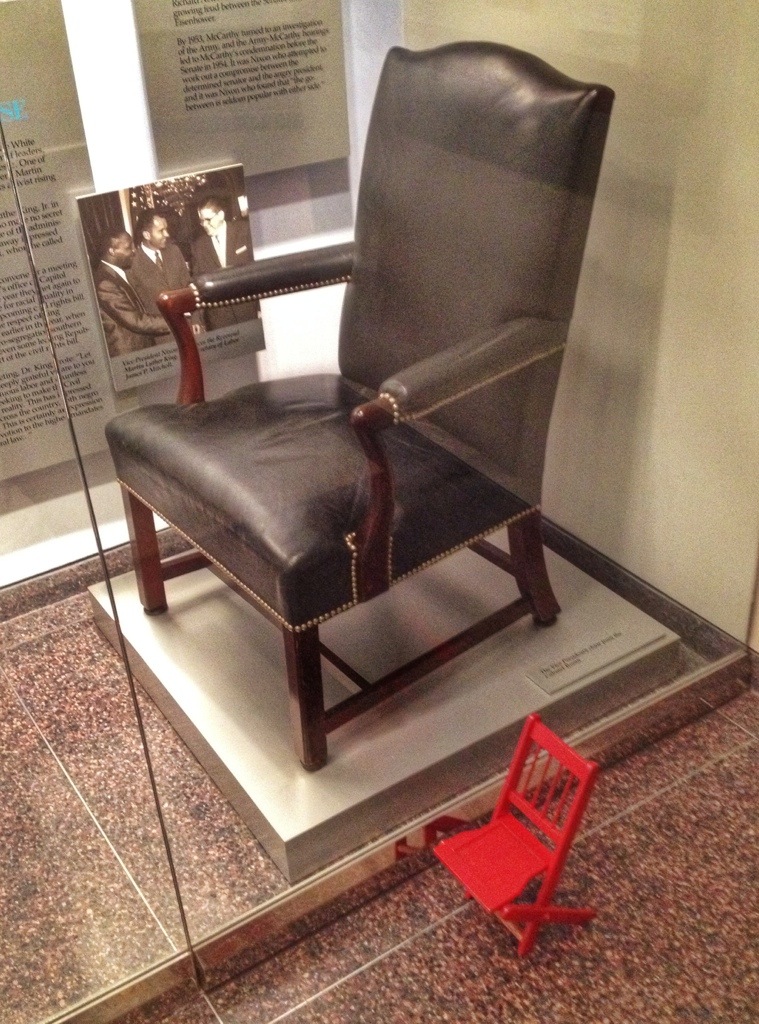 Pamela was my guide through Nixon’s Birth Place. Later, in the museum, she explained the reproduction of the Lincoln Sitting Room. The brown chair in the near corner was Nixon’s favorite chair.

I asked Pamela to pose with the red chair, which she laughingly agreed to do. As I walked away, I heard her say to another visitor, “Oh, people! Aren’t they funny? I love you guys.” 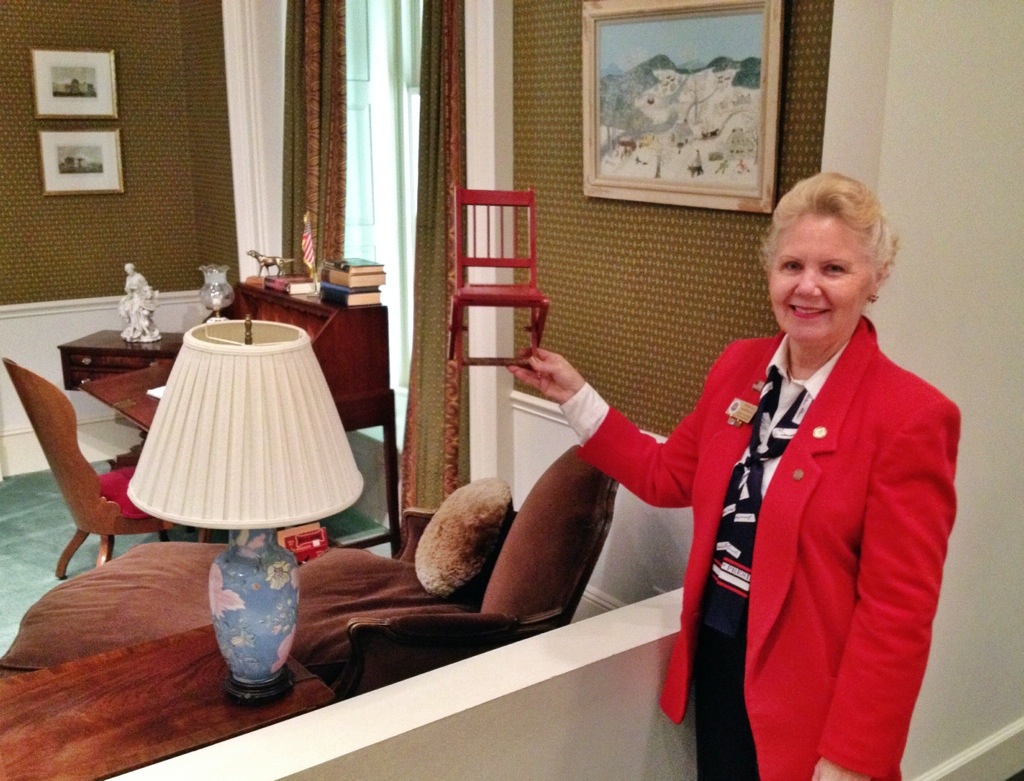 A reproduction of the East Room in the White House 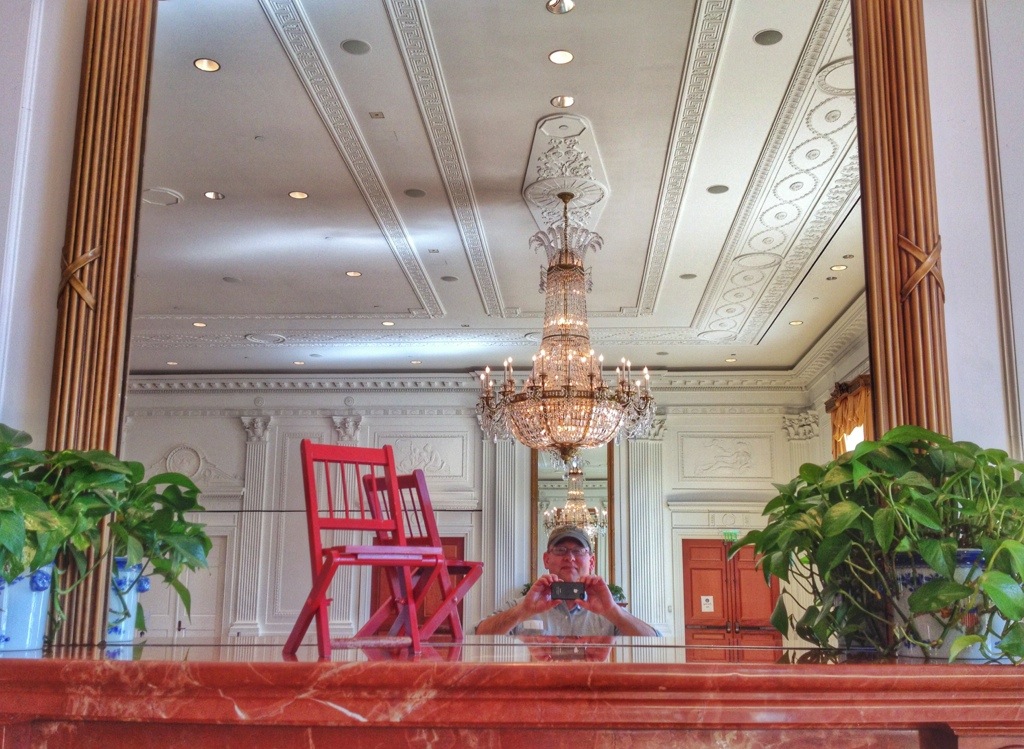 Nixon chose the “Great Leaders” to represent in this display. I wasn’t allowed to touch them because they are fragile — made of plaster, dressed in real clothes and then coated with stuff to make them look like bronze.

The cases along the wall contain gifts given to Nixon by foreign leaders. If they are valued over a certain amount (like $500), they belong to the nation, not the President. 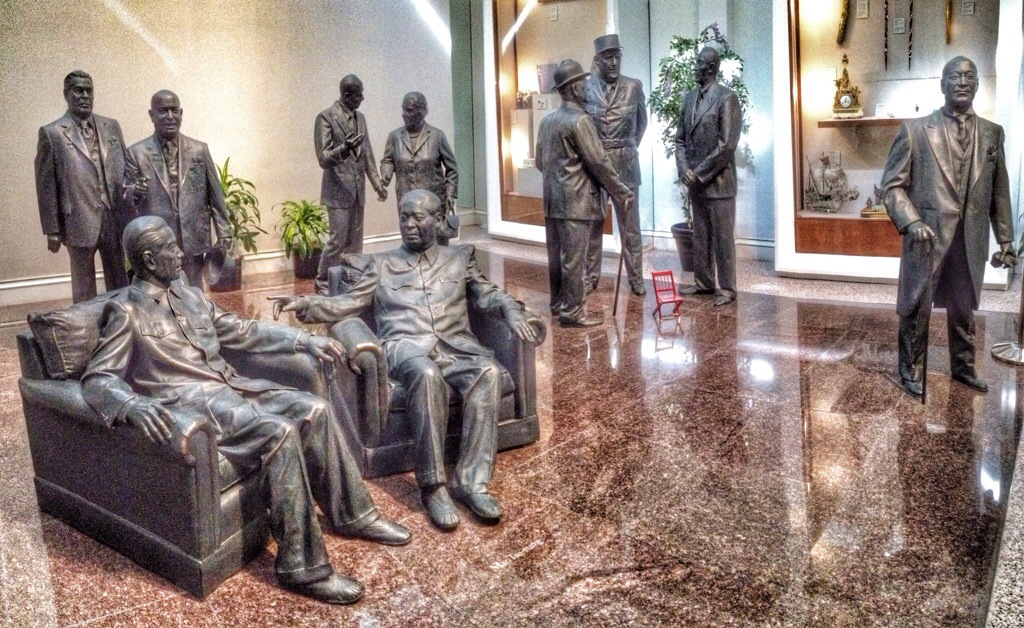 This is the reflecting pool in the courtyard of the Nixon Library. Just as I took the photo, a hummingbird (probably Anna’s) flew past in front of me. You can see it right above the chair, silhouetted against the top-most strip of white on the building. 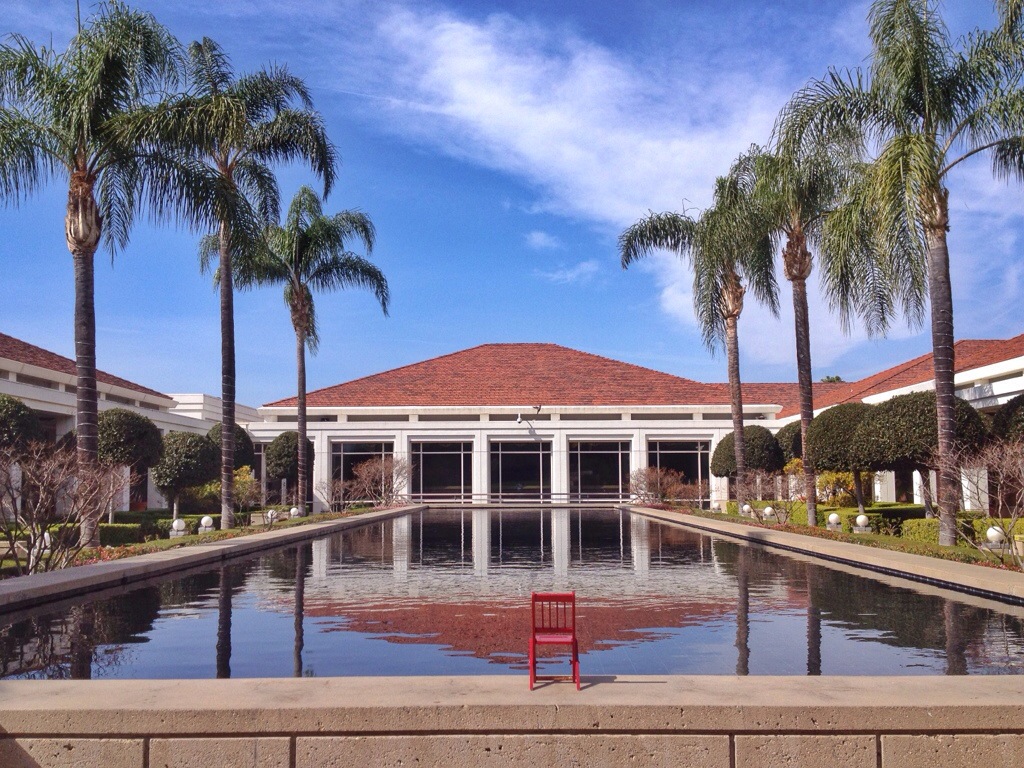 Nearby stands the gazebo used in the White House Rose Garden for Tricia’s wedding to Edward Cox in 1971. 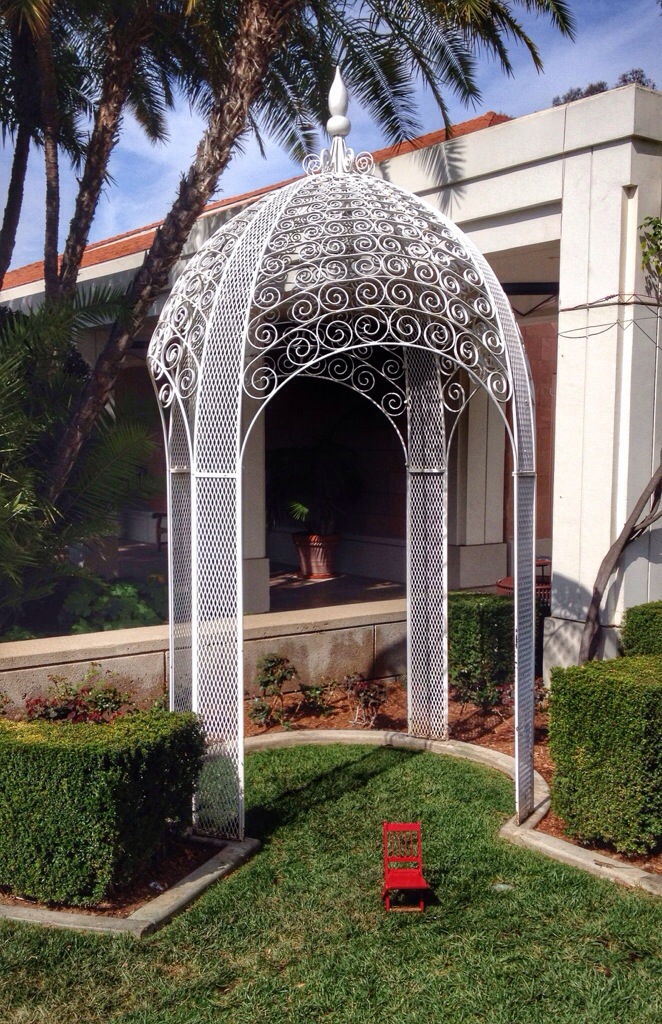 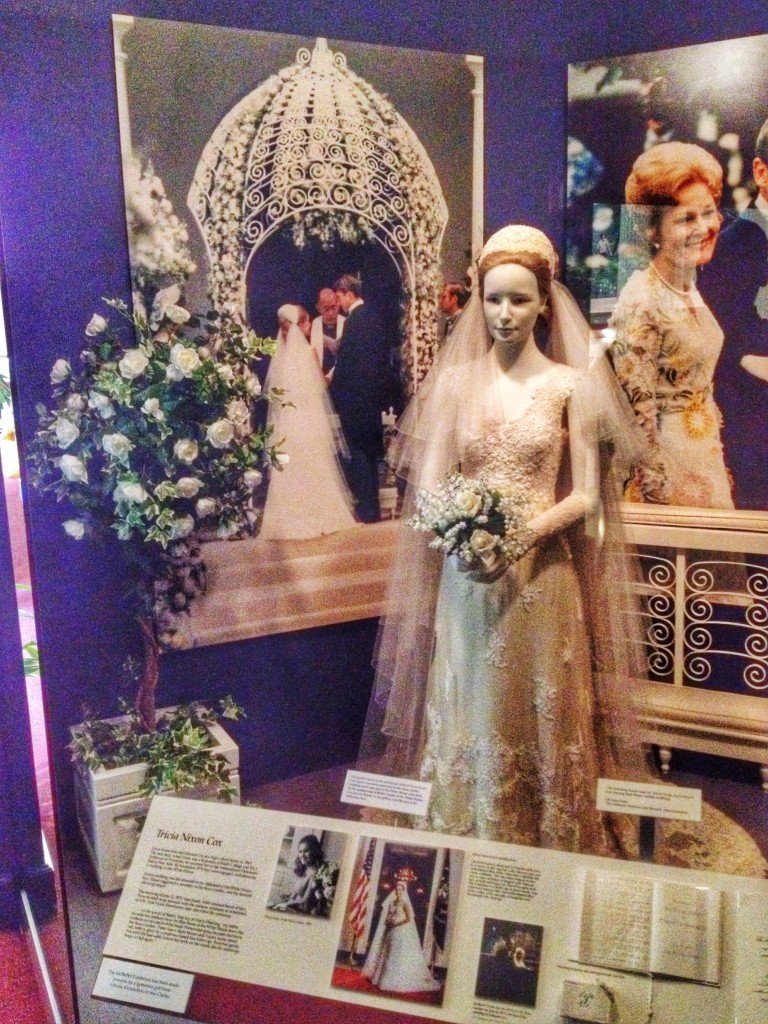 This Sikorsky VH 3A “Sea King” helicopter was used by Presidents Kennedy, Johnson, Nixon and Ford. Nixon used it to fly from the White House to Andrews Air Force Base on the day he resigned from office. When it was in use by a president, it was called Army One or Marine One, depending on which branch of the service the pilot was from. I was allowed inside, but there wasn’t much to see — just the cockpit and the cabin with benches. 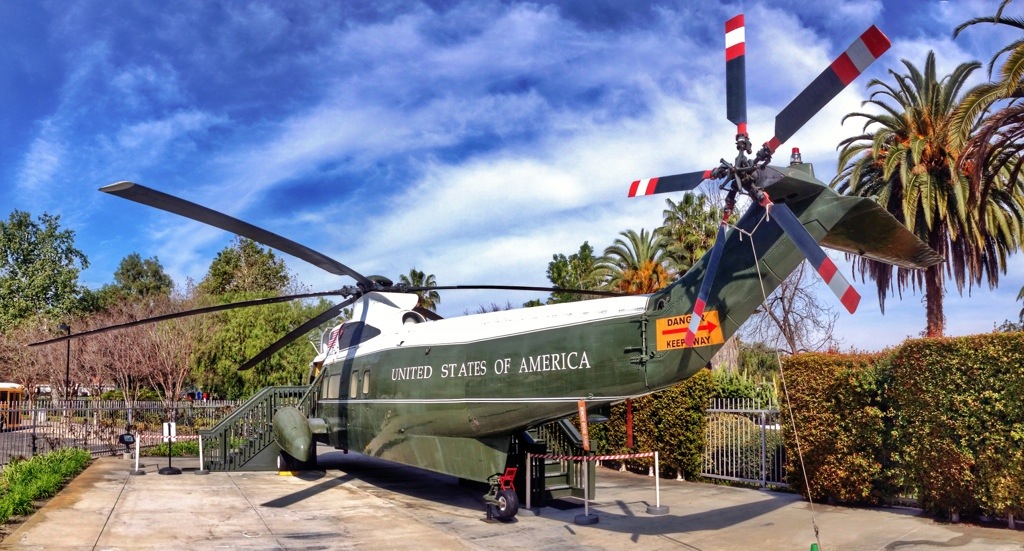 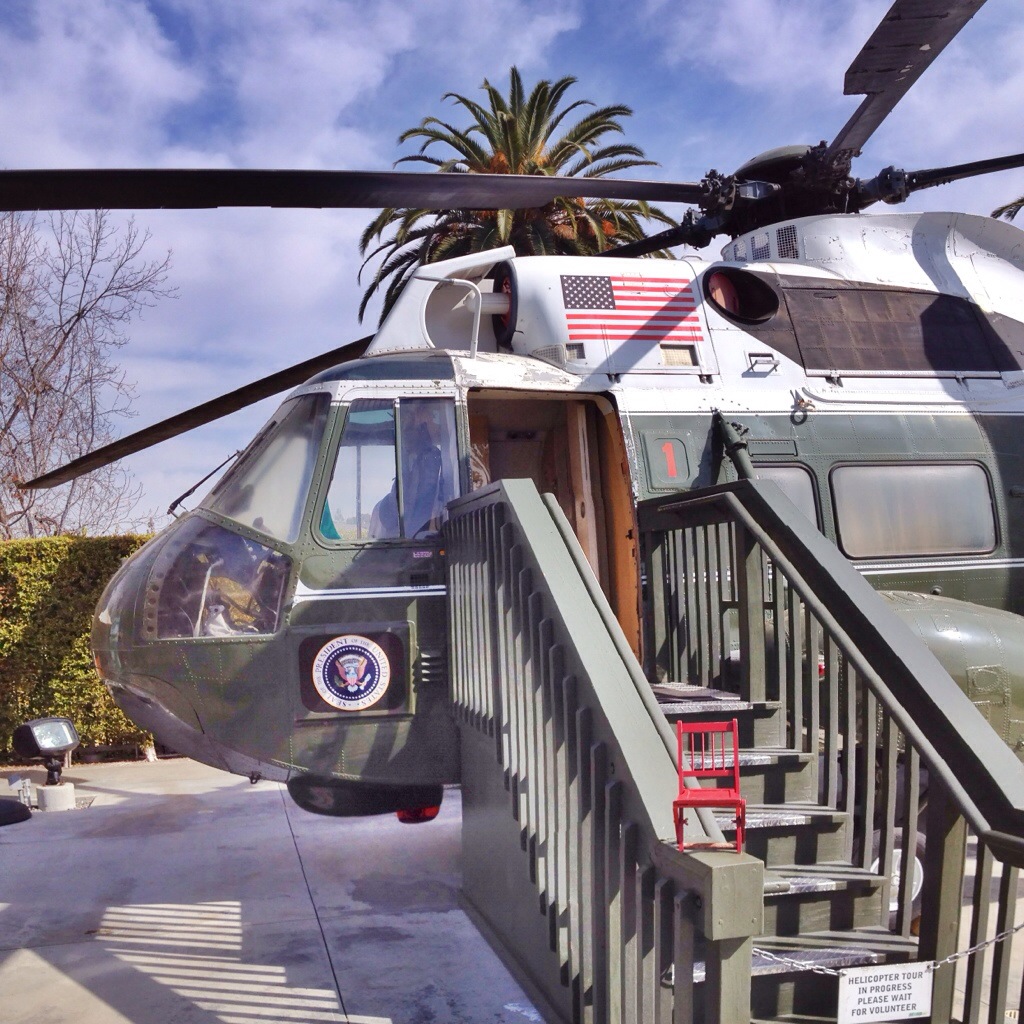