Rock and Roll Hall of Fame and Museum

This was not high on my list of attractions to visit, but we were in Cleveland on the Fourth of July and this was open — and pretty much nothing else was. 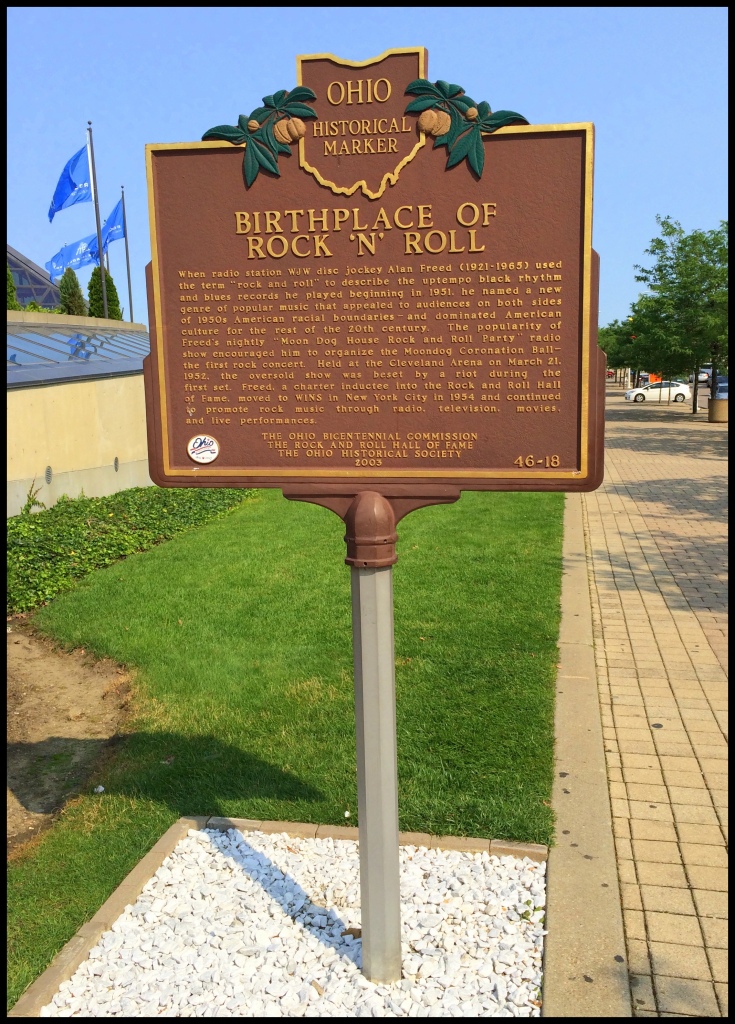 We got there early enough to get a $10 parking space right across the street. There were a lot of visitors this day, but not so many that it was hard to see exhibits or find seats in the theaters.

The lobby had several props used in concerts. 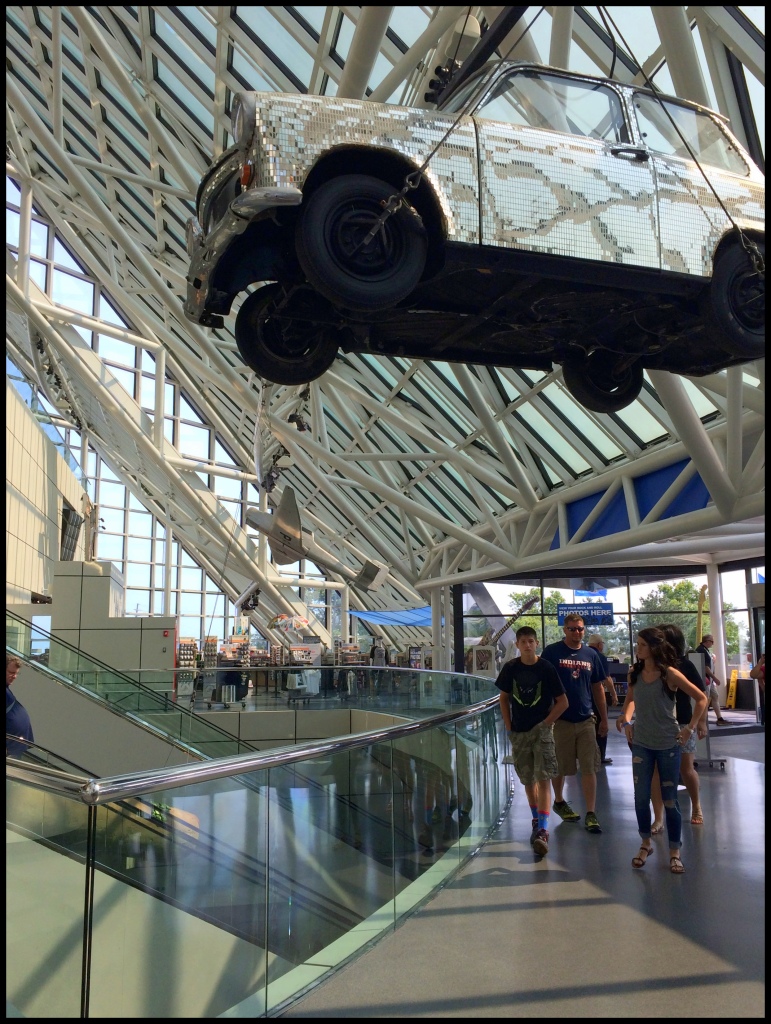 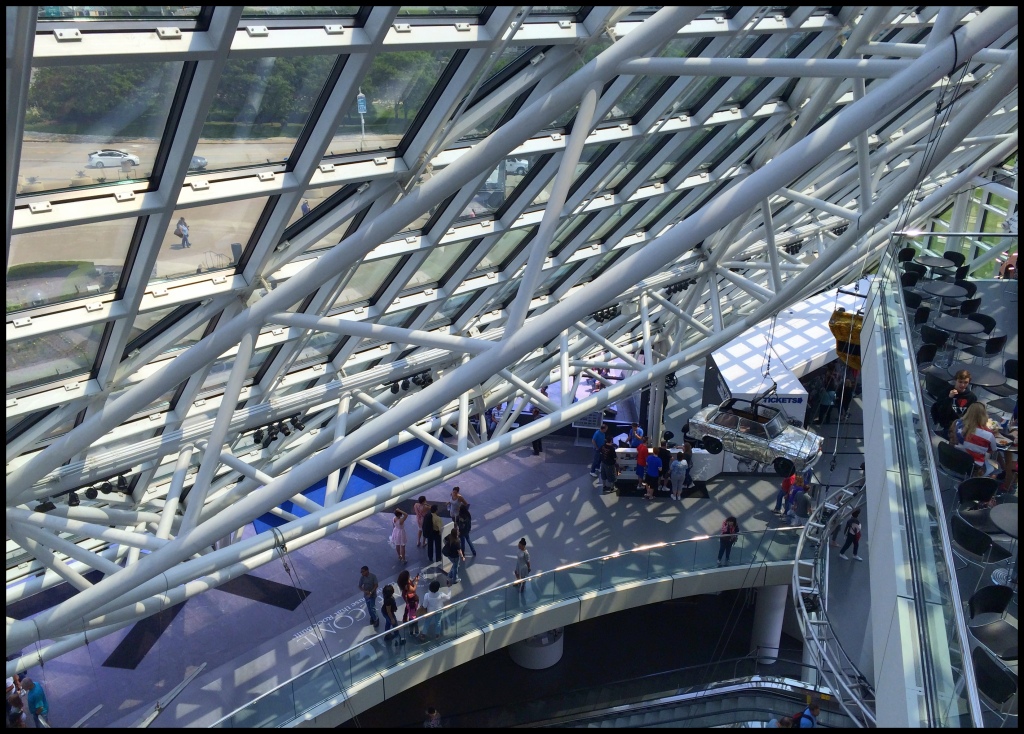 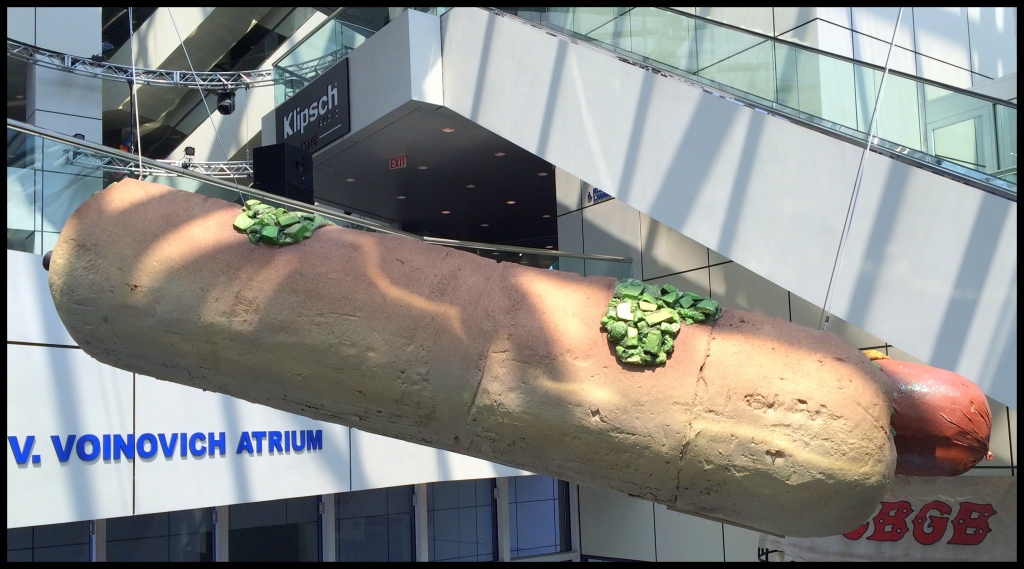 The exhibits consisted mostly of guitars, drum heads, clothing and album covers from musicians past and present, inducted into the Hall of Fame and not.  They were arranged by artist, time period or genre, but there really wasn’t a story to any of it, just a collection of random stuff in displays that looked like this. 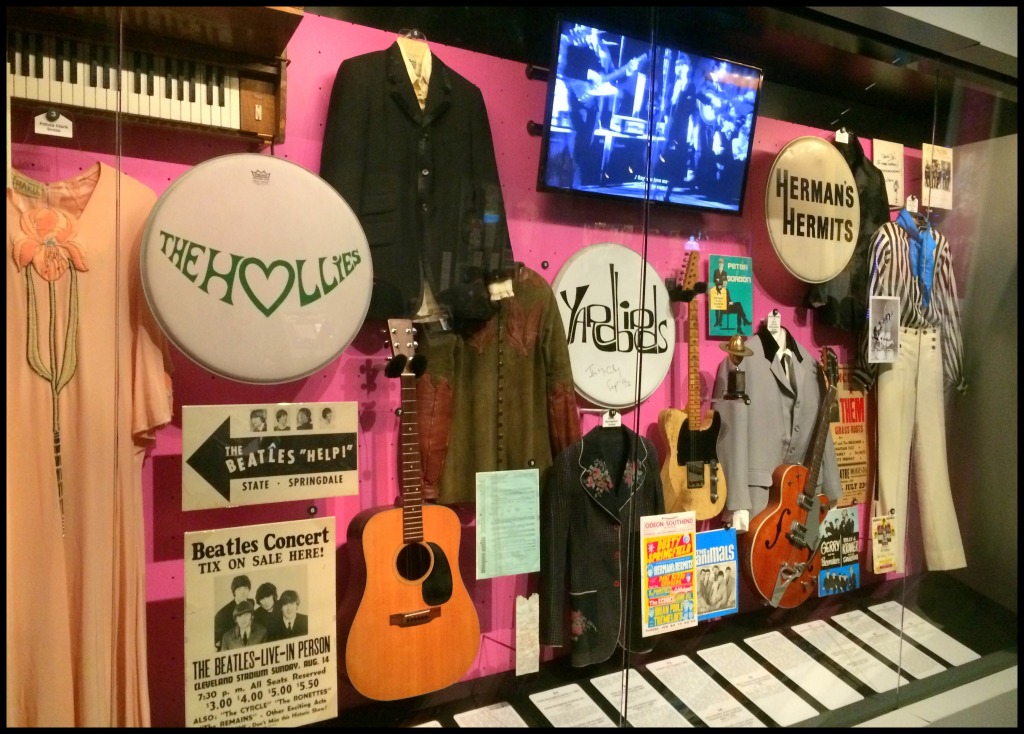 There were exhibits about the “greats.” Like the Beatles. 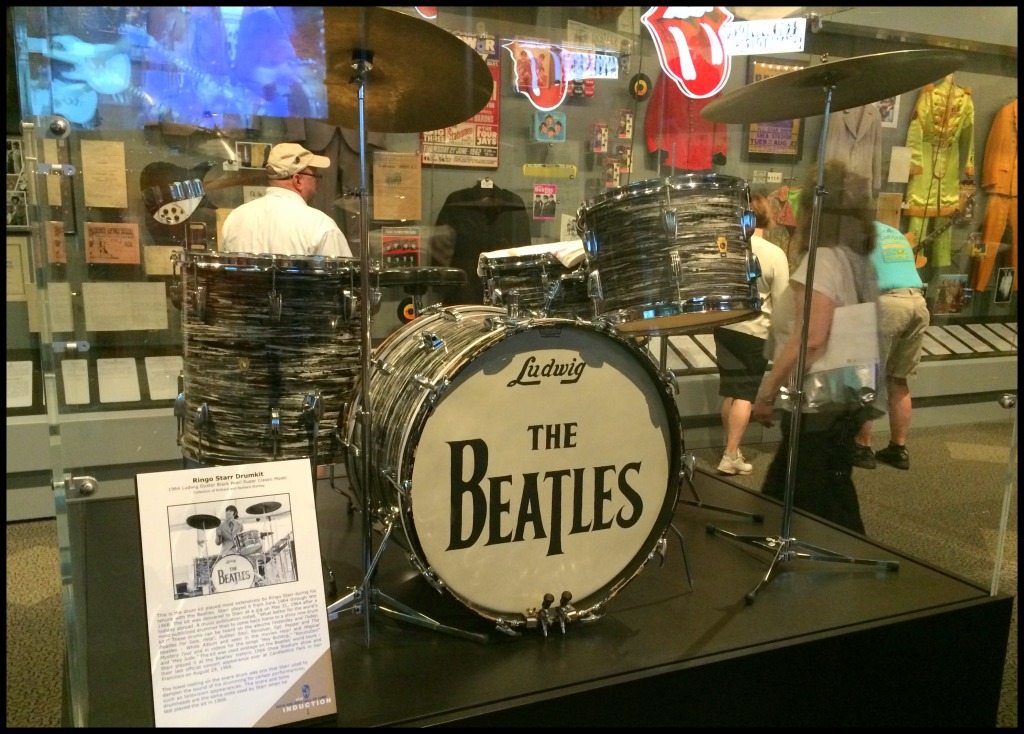 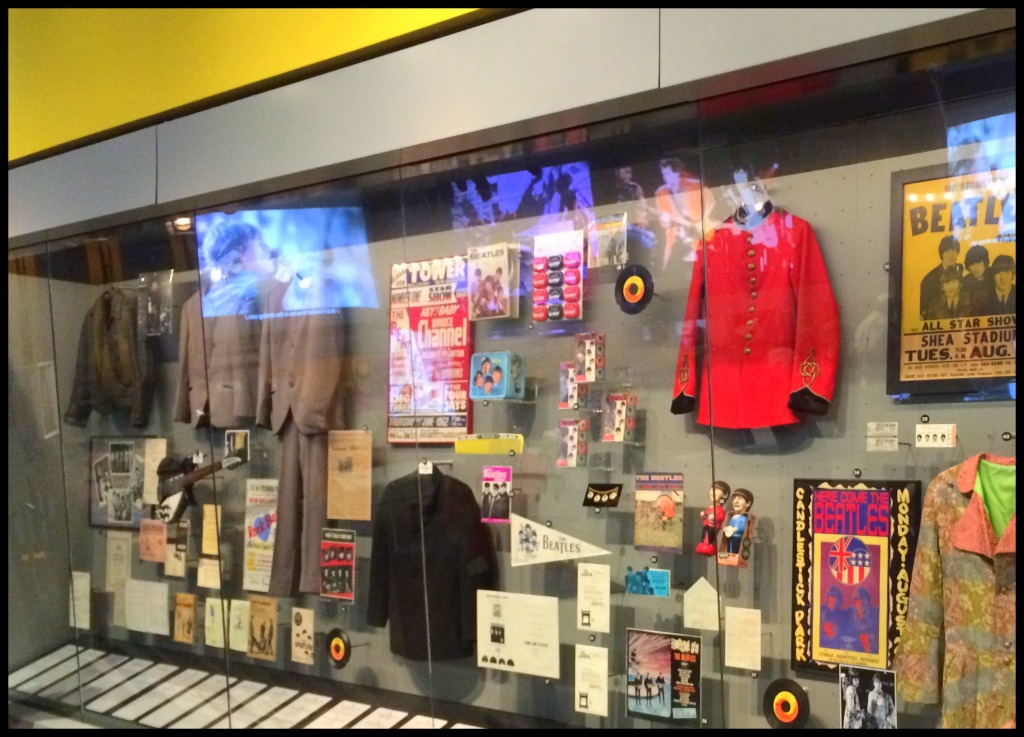 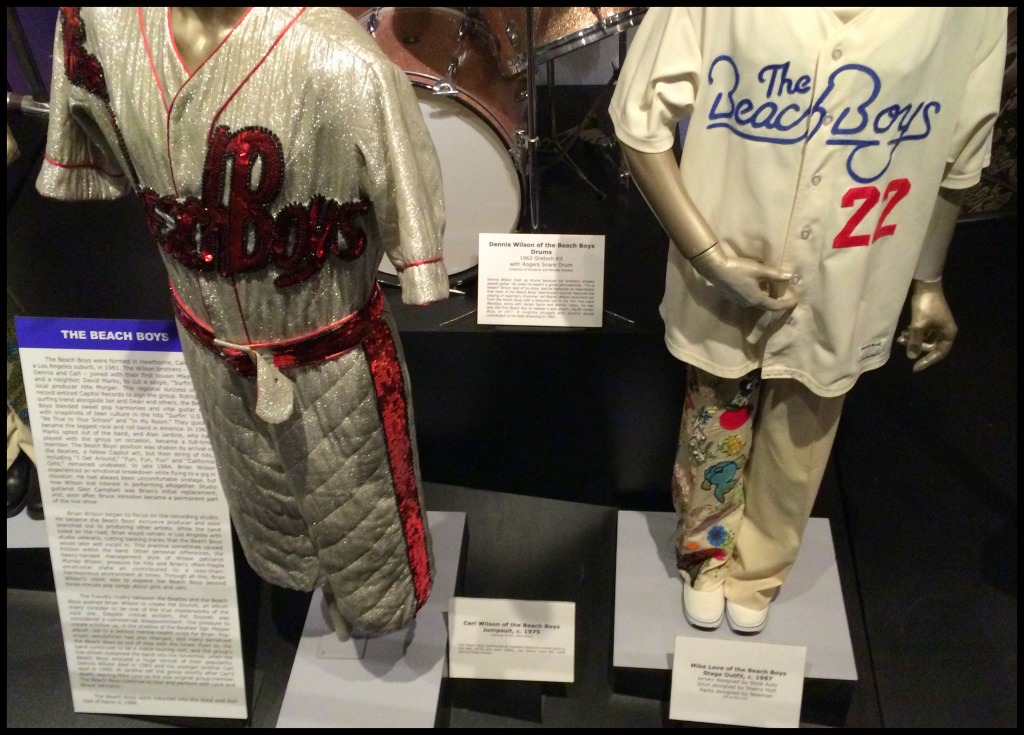 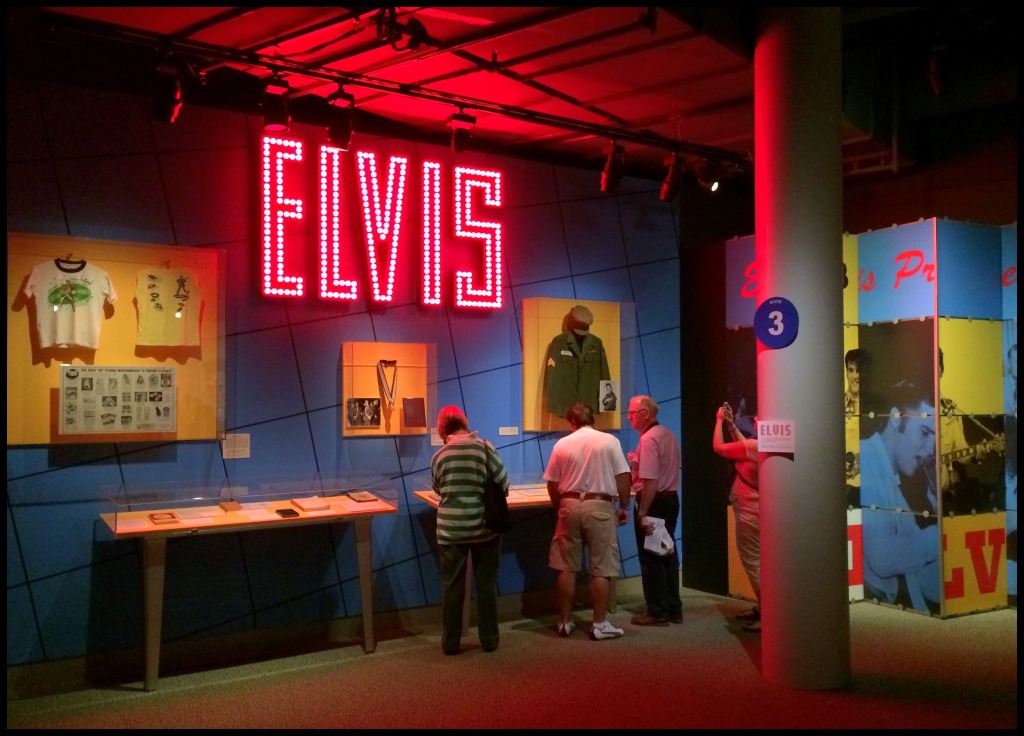 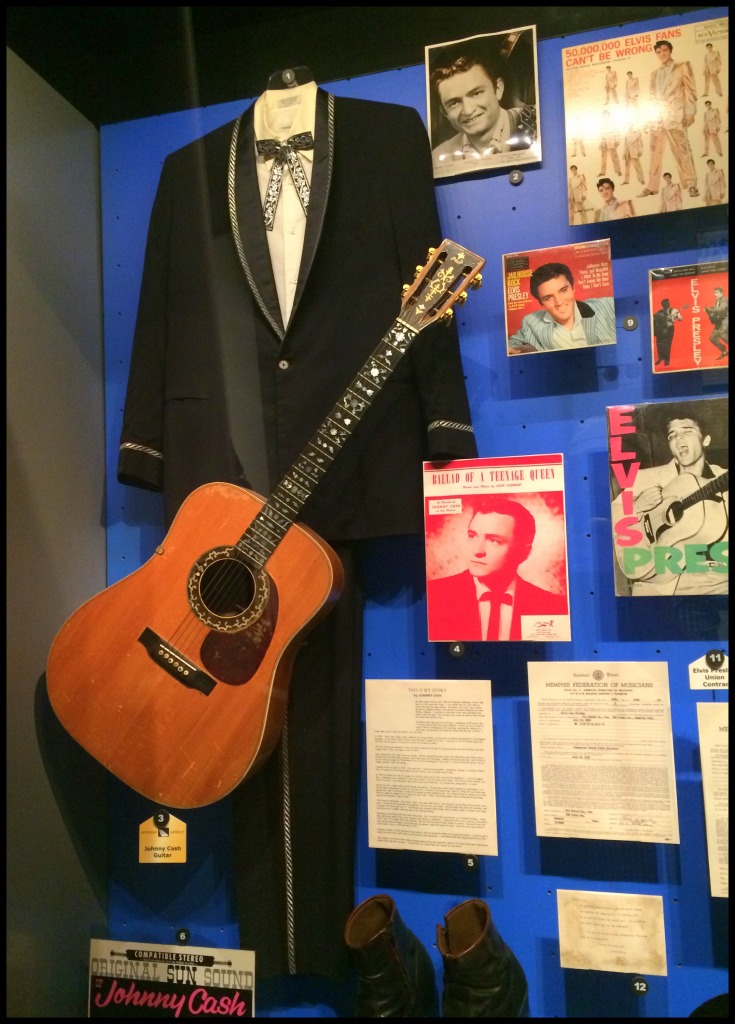 And lots and lots of guitars, like these from Jimi Hendrix and Paul Simon. 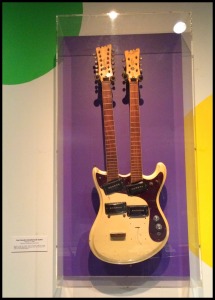 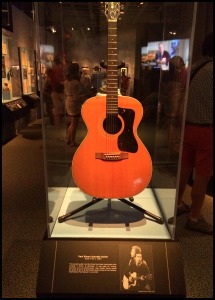 We stopped off in a theater for 15 minutes or so to watch a history of American Bandstand, which was sorta fun. I thought the most interesting part was the history of Alan Freed, the Cleveland disc jockey who coined the term “Rock and Roll.” (Which is why the Hall of Fame is in Cleveland.) 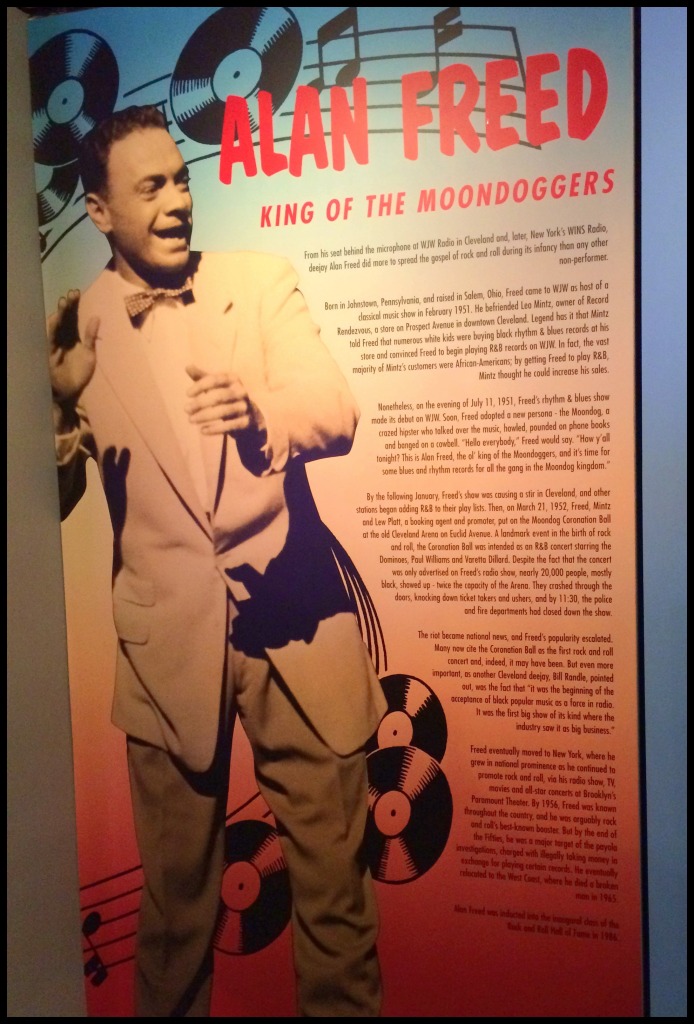 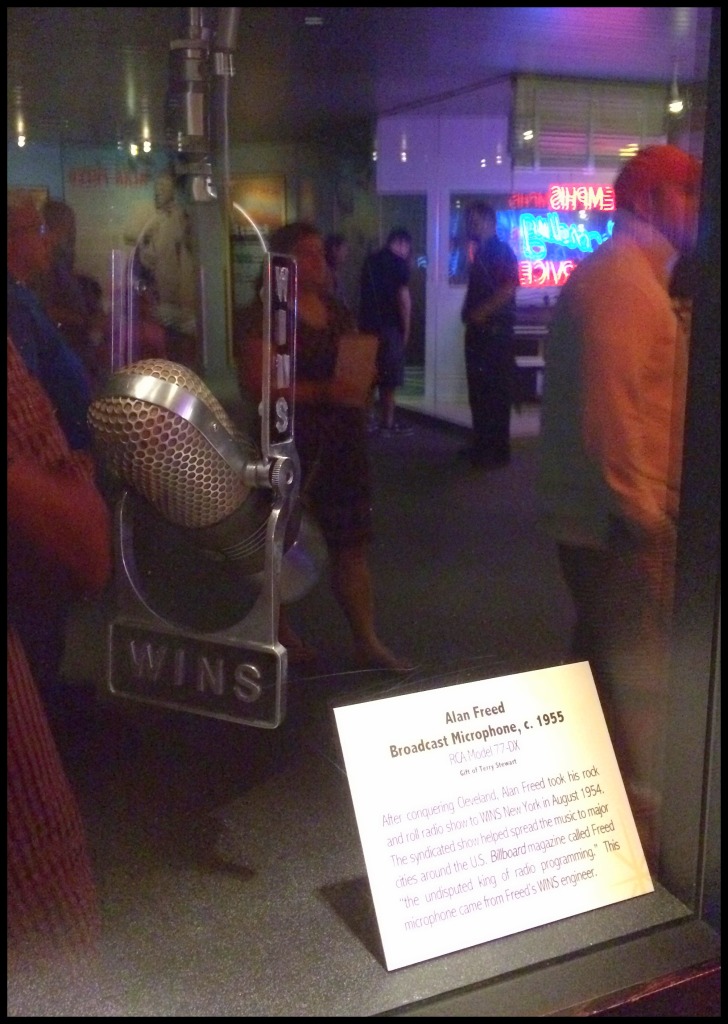 We bought surprisingly-good but ridiculously-expensive sandwiches in the cafe and ate out on a deck overlooking Lake Erie.

The official Hall of Fame consists of a wall with signatures engraved in glass in alphabetical order. It was underwhelming. 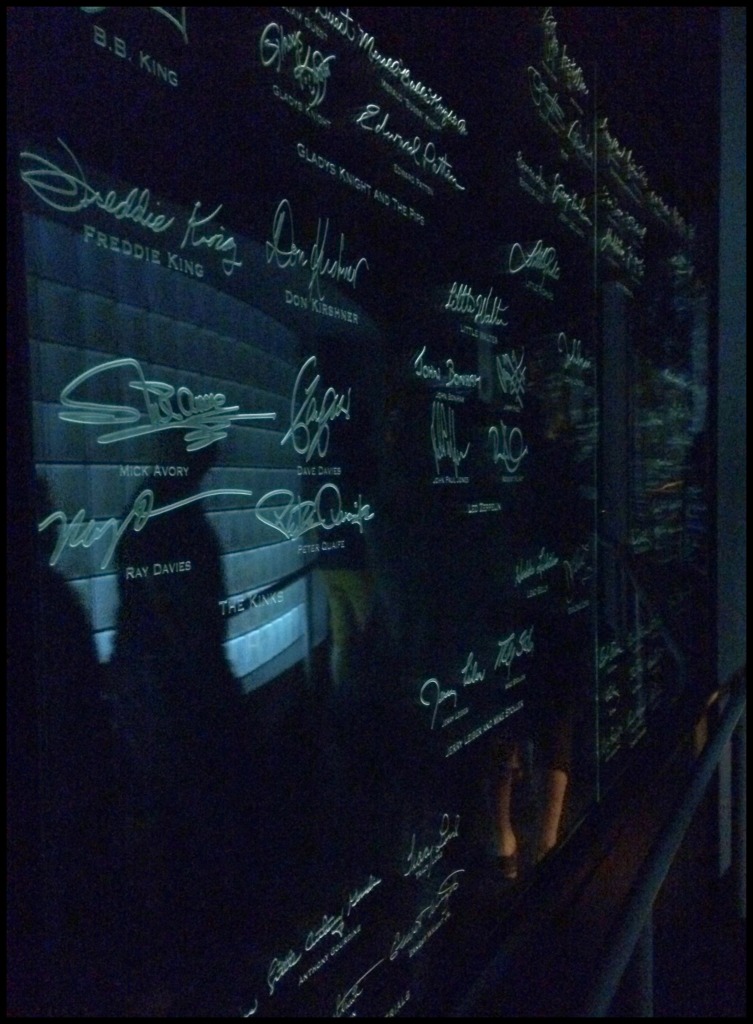 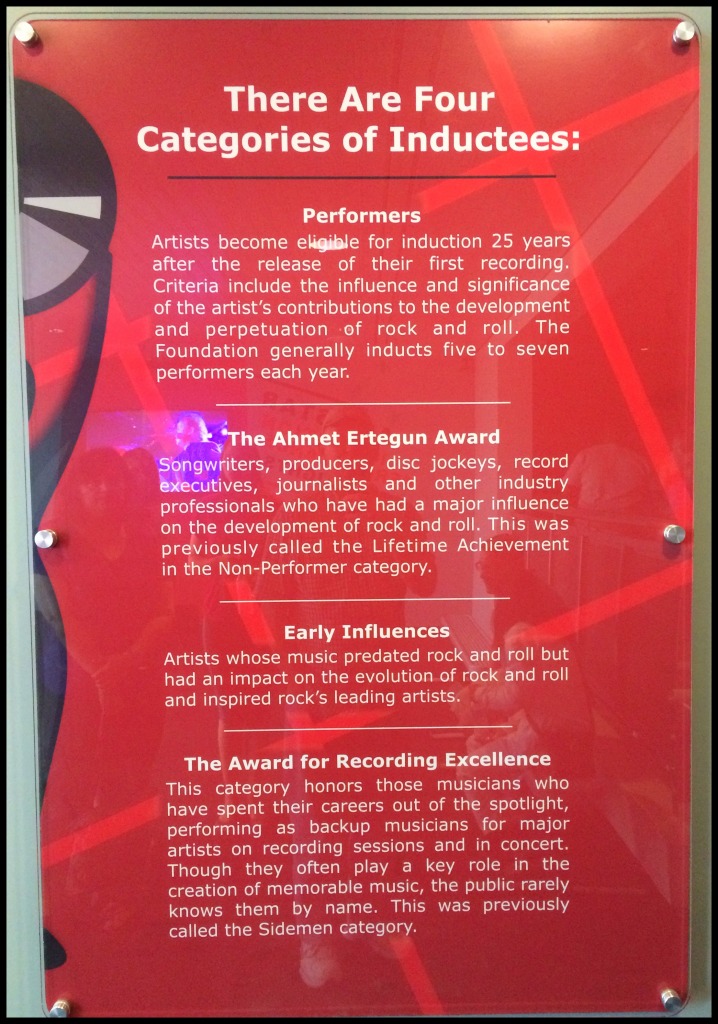 There was also a movie about all the inductees, and we sat through the whole thing, to our regret. There were three screens, all showing different things in quick succession while snippets of songs played loudly. There was no structure to it. It would feature, for example, Elvis and play Elvis songs in the background and show Elvis photos and videos on the screen. Then it would feature Chubby Checkers, with pictures and videos of him and some other people and maybe a few more of Elvis. The whole time the names of the people and groups were running across the screen in various type faces that were often impossible to read. At the beginning, when it featured the early years when the more classic bands were inducted, it was OK, but as it went on, more and more groups that I didn’t care for, like Motown bands and rappers and pure trash like Beastie Boys and Red Hot Chili Peppers were featured. The whole thing was total sensory overload and made me sympathetic to those who consider rock music trashy across the board. 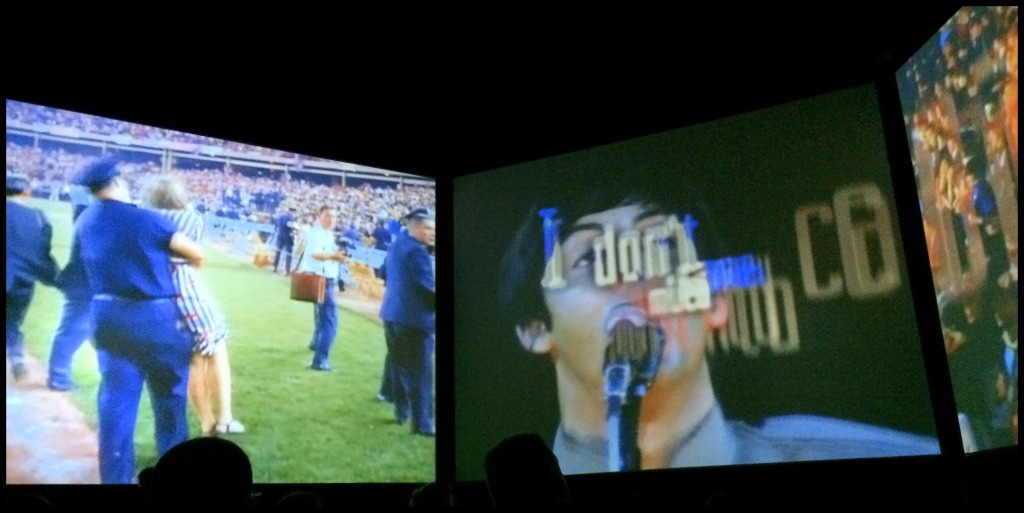 After we escaped from that we felt so beaten up that we just wanted to get away. We strolled quickly through the upper floors but avoided any more videos and didn’t spend much time on the displays — one of which was this oddity from Pink Floyd. 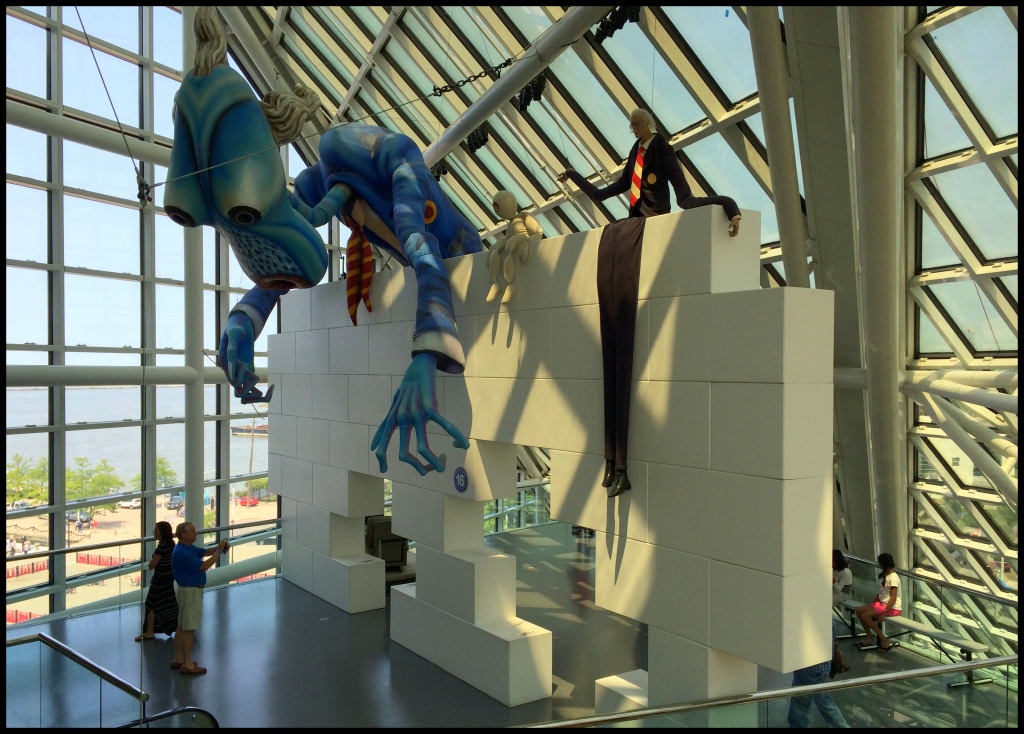 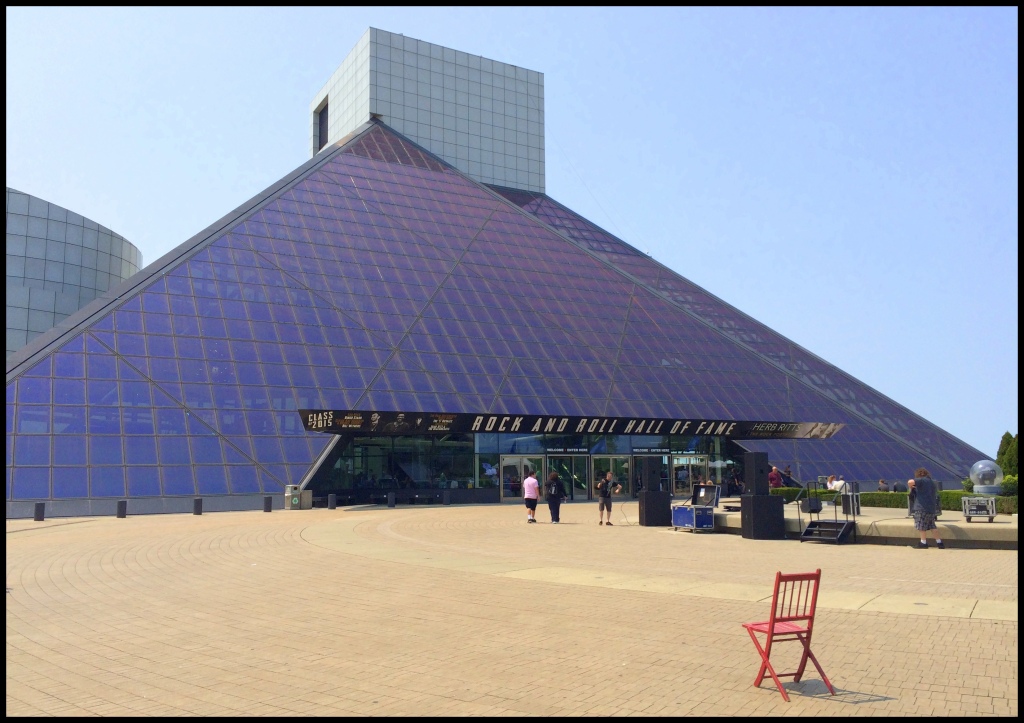 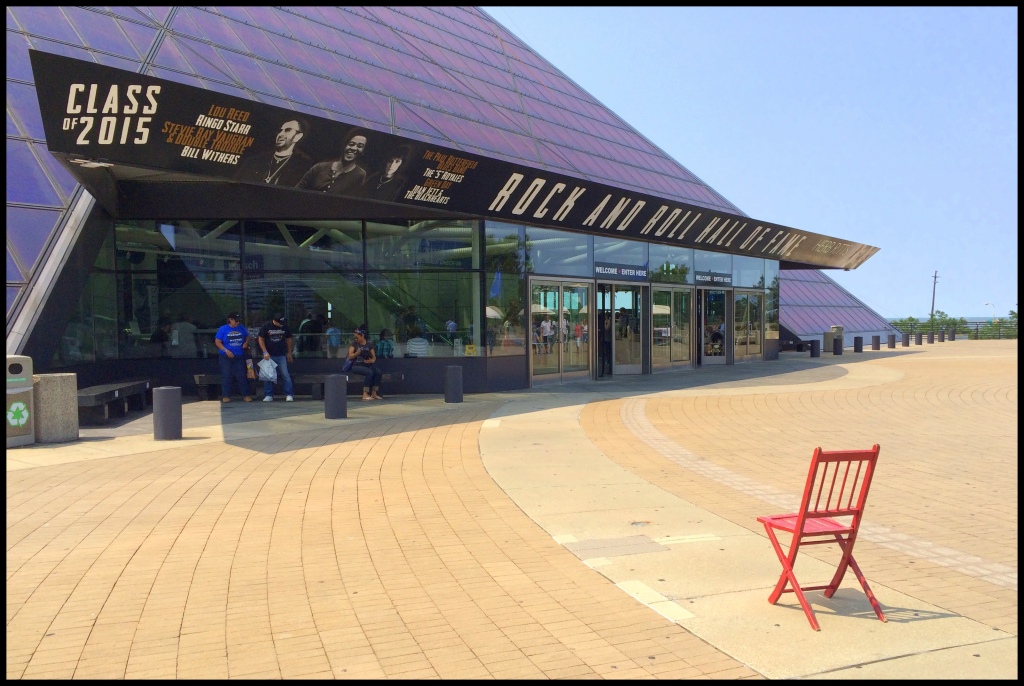 We decided to take a stroll down to the shore of the lake. 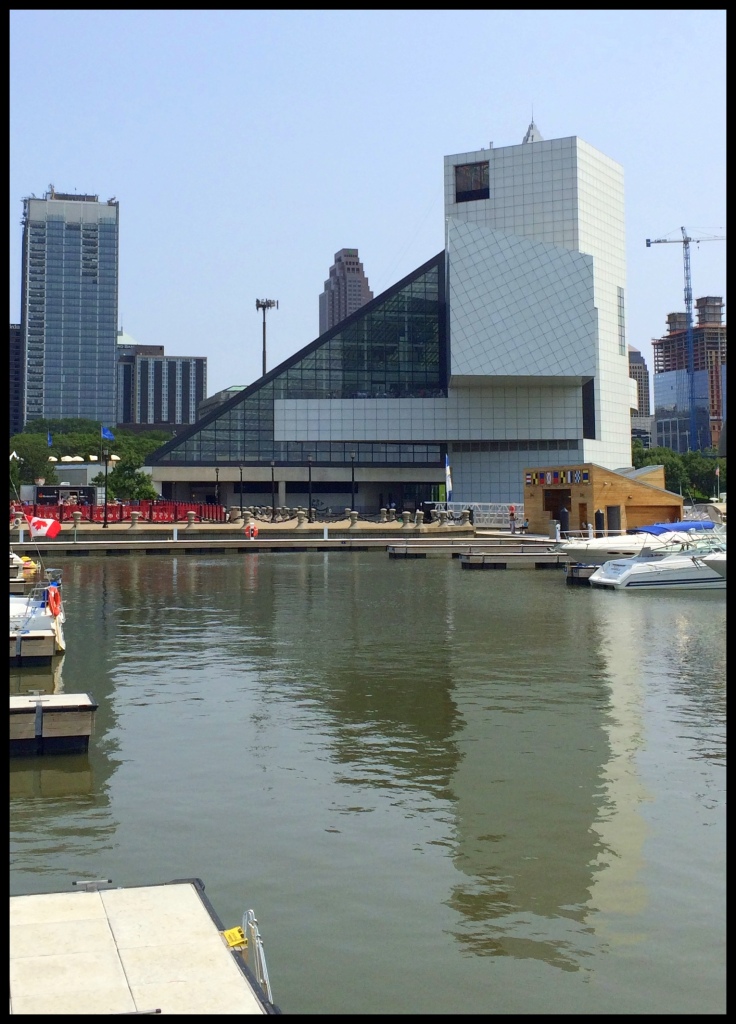 I came away disturbed. I’m not about to condemn music just because it’s considered Rock — I like a lot of it. But there is no question that many of the songs and most of the artists’ lifestyles are disgusting. When I’m choosing what to listen to, I can be discerning. At the Hall of Fame, I couldn’t, and it bothered me. I certainly wouldn’t recommend a visit with kids. It wasn’t until the next morning that I felt like I’d regained my equilibrium.

This entry was posted in Museums, Music. Bookmark the permalink.