We had a little while to kill on the morning of the Fourth, so we drove to the east side of Cleveland to see the neighborhood where Jerry Siegel and Joe Shuster lived. They were the teenagers who created Superman.

The neighborhood isn’t a pleasant one and my wife wasn’t enthusiastic about our adventure. We found Siegel’s house first. It’s the nicest one on the street. A society of Superman fans have offered to buy it for a museum. The owners aren’t ready to sell, but they are willing to give the society right of first refusal. In return, the society pays to keep up the house. I paused out front and took some photos. That’s when I noticed the guy on the front porch reading a paper. A few seconds later, a largish, middle-aged Black woman in a Superman T-shirt came out the front door. I waved and she waved back. 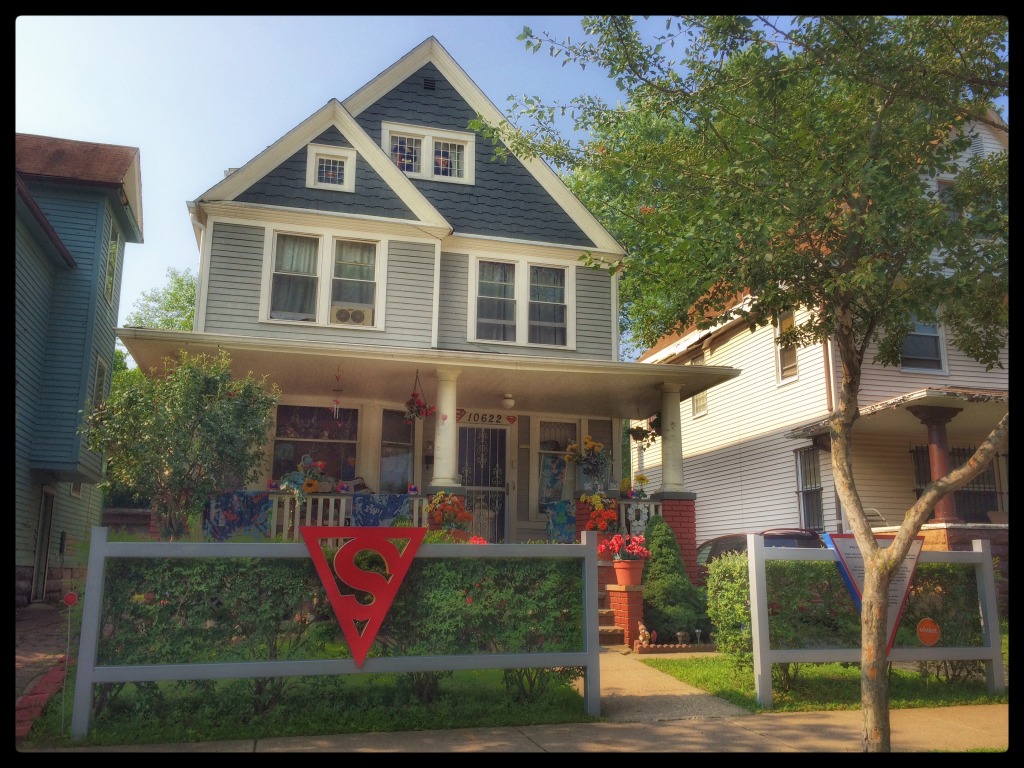 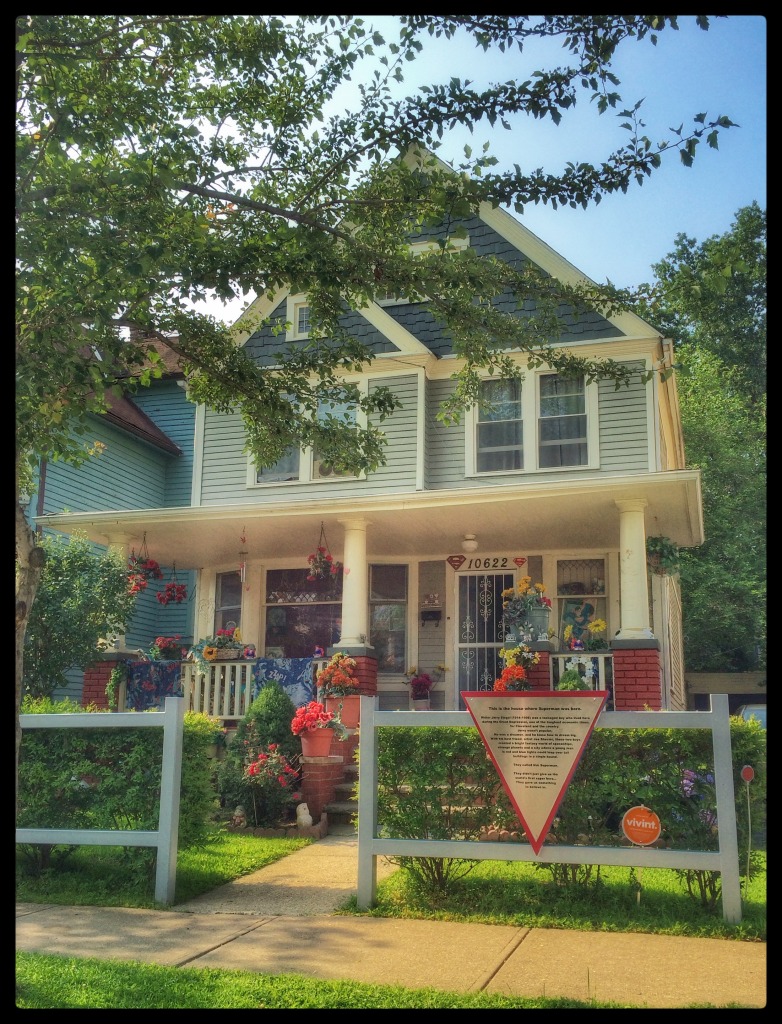 This is the house where Superman was born.

Writer Jerry Siegel (1914-1994) was a teenaged boy who live here during the Great Depression, one of the toughest economic times for Cleveland and the country.

Jerry wasn’t popular. He was a dreamer, and he knew how to dream big. With his best friend, Joe Shuster, these two boys created a bright fantasy world of spaceships, strange planets and a city where a young man in red and blue tights could leap over tall buildings in a single bound.

They called him Superman.

They didn’t just give us the world’s first super hero — They gave us something to believe in.

I drove a couple blocks away to find the lot where Joe Shuster’s house used to be. When I turned on the street, I noticed a sign that said “Joe Shuster Lane.” I stopped and took a photo with my cell phone. Two guys half a block away saw me. One of them yelled, “Hey, could you please inform me what exactly you’re doing?”

Not really. I’m not about to type what he really said. I pointed to the sign and said, “Just taking a photo of the sign. Superman.” And then I took off. The guy yelled some more I couldn’t understand, but I didn’t go back and ask.

Shuster’s apartment is long gone, but on the fence around the lot somebody has placed metal sheets with the cover and panels from the first Superman comic. 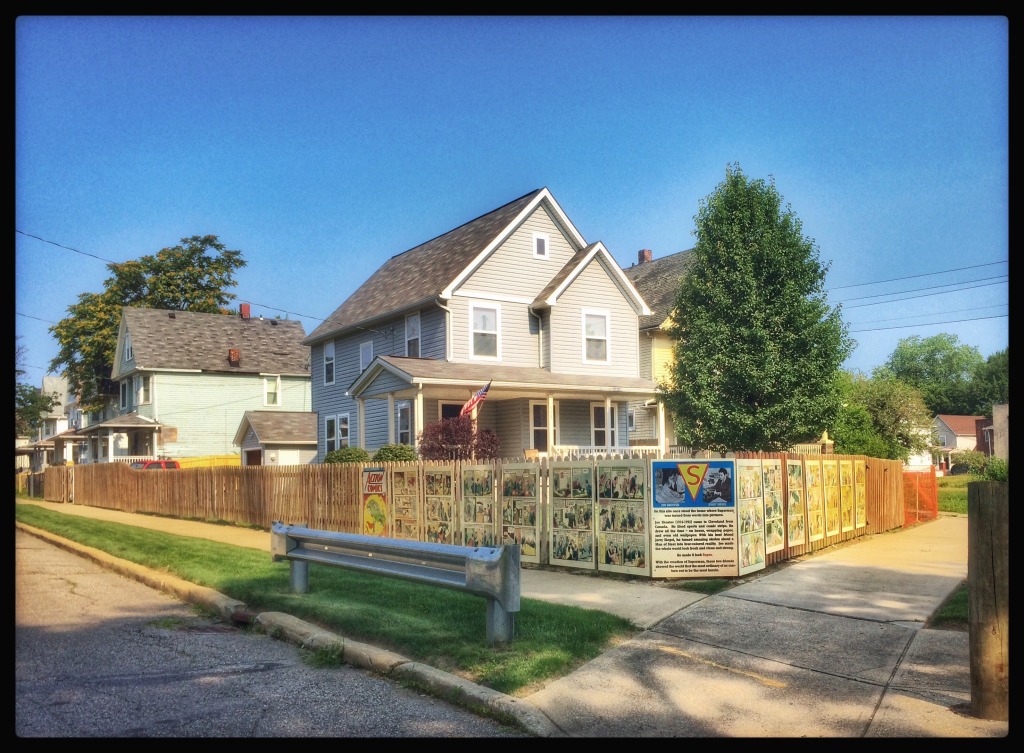 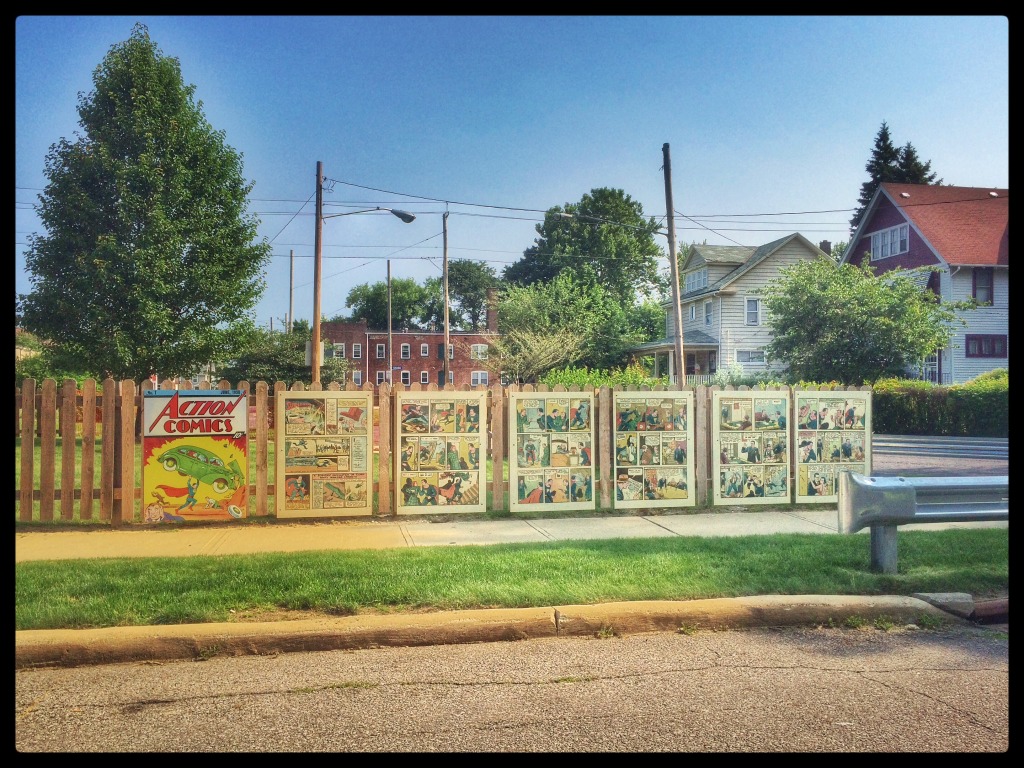 On this site once stood the house where Superman was turned from words into pictures.

Joe Shuster (1914-1992) came to Cleveland from Canada. He liked sports and comic strips. He drew all the time — on boxes, wrapping paper, and even old wallpaper. With his best friend Jerry Siegel, he turned amazing stories about a Man of Steel into four-color reality. Joe made the whole world look fresh and clean and strong.

He made it look Super.

With the creation of Superman, these two friends showed the world that the most ordinary of us can turn out to be the most heroic.

There was another sign on a street corner not far away, but we were feeling out of our comfort zone after the last confrontation, so we didn’t stop. It read:

Jerry Siegal [sic] and Joe Shuster, two Glenville High School students imbued with imagination and talent and passion for science fiction and comics, had dream become reality in 1932. They created Superman, the first of the superheroes ever to see print. The 1932 prototype was of a villainous superhero. Superman then became the hero who has been called the Action Ace, the Man of Steel and the Man of Tomorrow.

Although the success of Superman spawned an entire industry, publishers and newspaper syndicates did not originally accept the creation. Superman did not appear until 1938 when he became a lead feature on the cover of Action Comics No. 1. As co-creators of the most famous of mythical beings, Siegal and Shuster infused popular American culture with one of the most enduring icons of the 20th century. Superman has appeared in animated series, live-action series, major motion pictures, advertisements, and comic books, where his popularity grows with each generation of readers.