I happened to mention to my wife that we would be near Santa Claus, Indiana and she immediately insisted that we stop. I did a tiny bit of research and saw that there was a “Santa Claus Museum.” I thought a quick trip to see the history of St. Nick might be interesting. 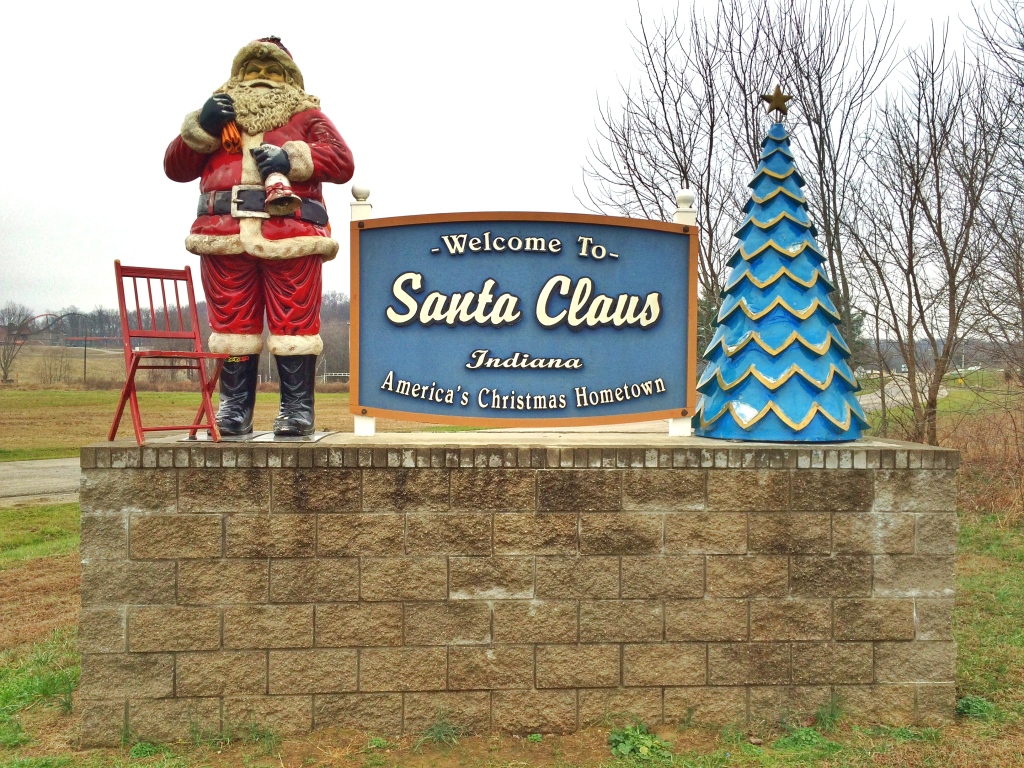 It was only a couple miles from Lincoln’s home. We drove through town and saw Holiday World (closed for the season), the Santa Claus Lodge and a Subway … and that was pretty much it.

I turned around and tried again, and, with some help from GPS, found the museum. We were the only visitors. There were three buildings on the grounds — an old Santa Claus post office where kids could write letters to Santa, an old church that was built in 1880 and is available for anyone who wants to get married in Santa Claus … 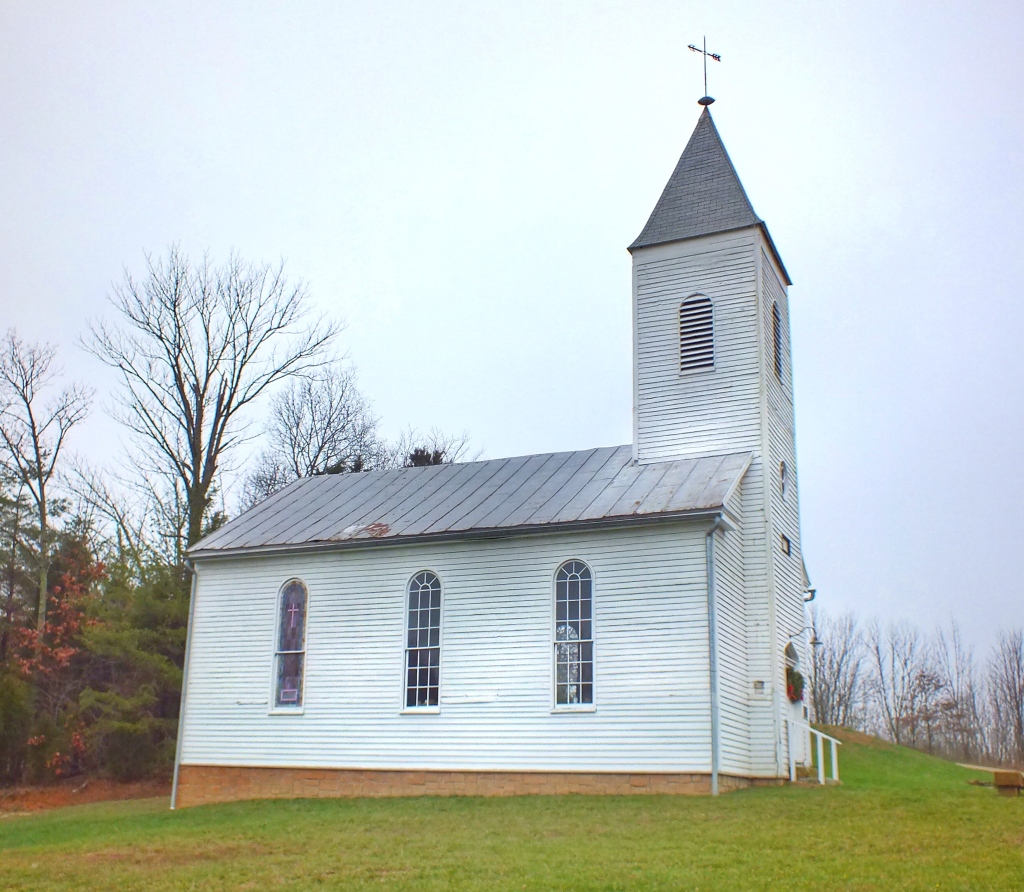 and the museum — which turned out not to be about Santa Claus, the fat guy in the red suit. It was about the town of Santa Claus, and particularly about how quaint and delightful it all is. We were there about 10 minutes. 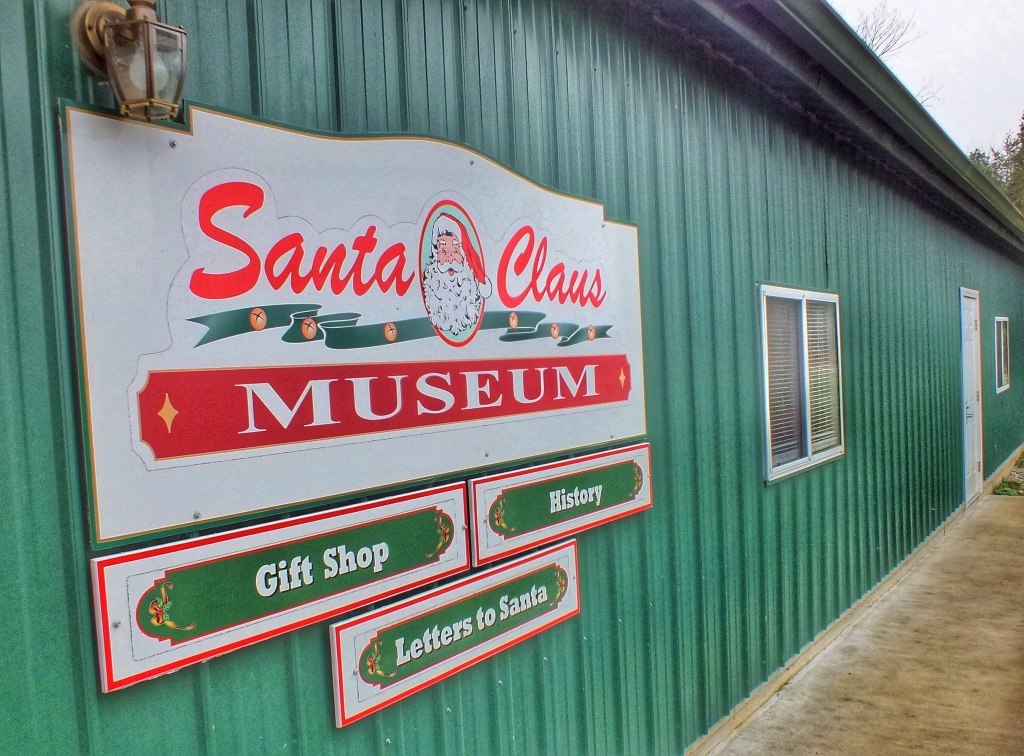 We learned how the town got its name. It’s a very exciting story. 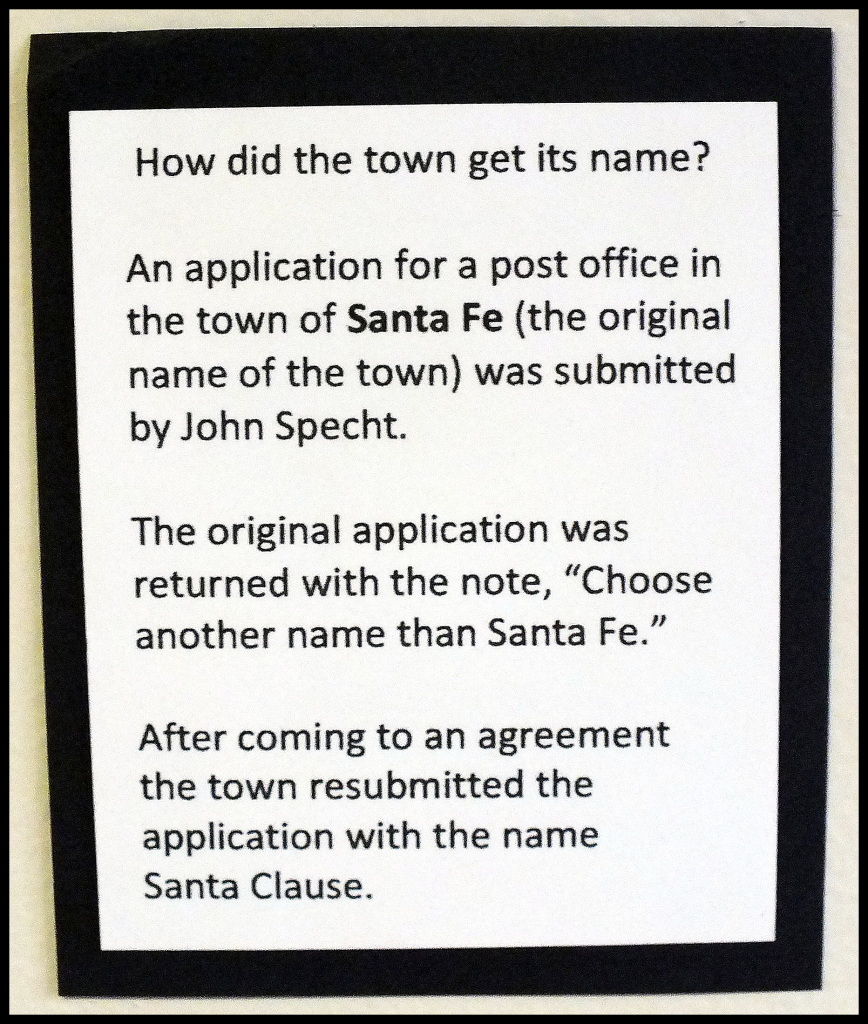 Yes, they did spell the name of their own town incorrectly — in a museum dedicated to that town.

We learned about a guy who used to be the local Santa and we saw a couple cases of exhibits from when Holiday World used to be called Santa Claus Land. Here’s a photo of about a third of the entire museum. 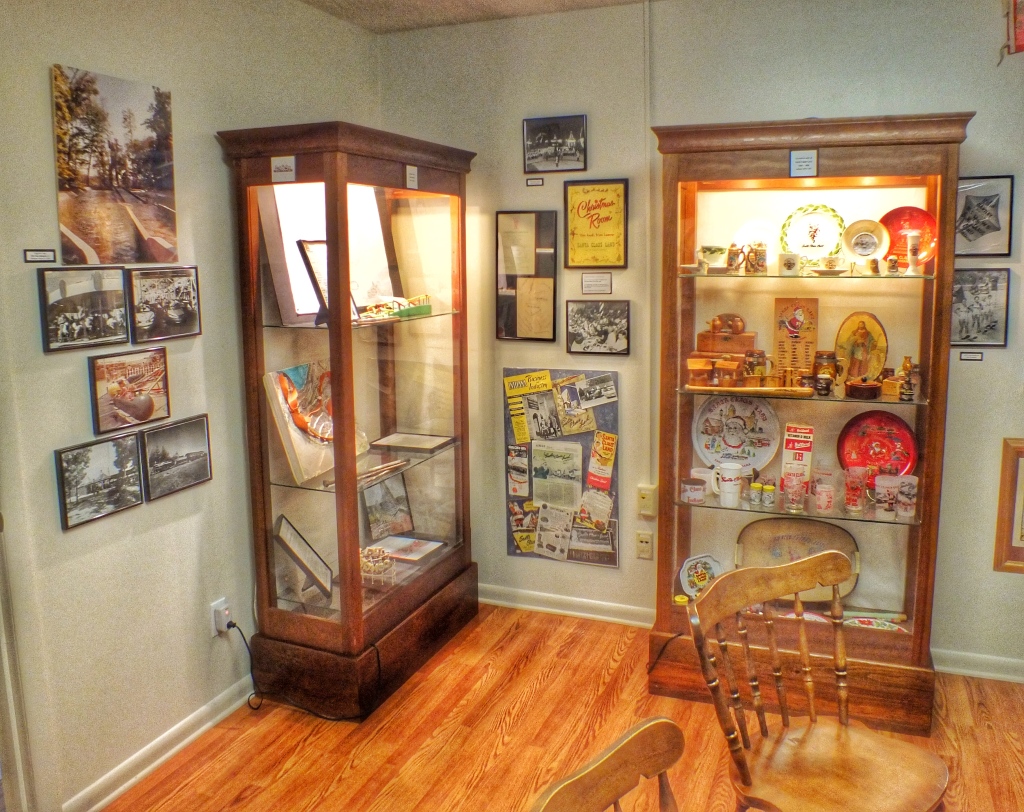 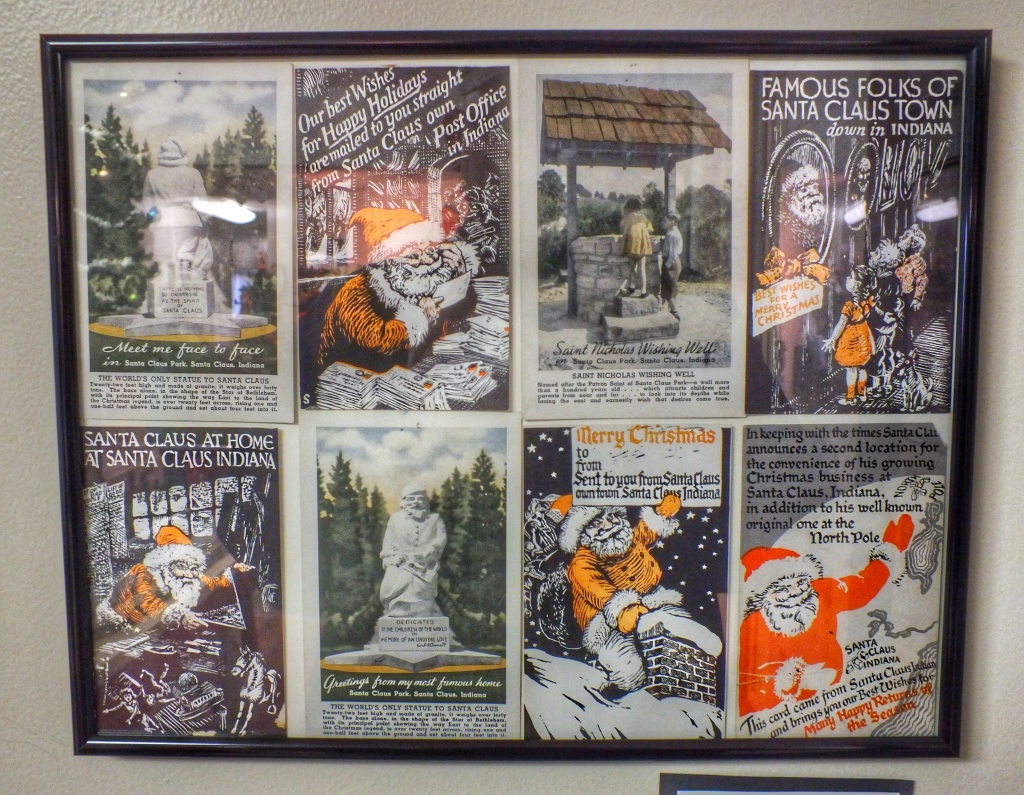 It all seemed rather self-absorbed.

There is also a large cement statue of Santa, built in 1935 and sometimes billed as the oldest Santa Claus statue in the world. The guy who put it up claimed it was erected on the site of a meteor landing. He also said the star at the base represents the Star of Bethlehem. 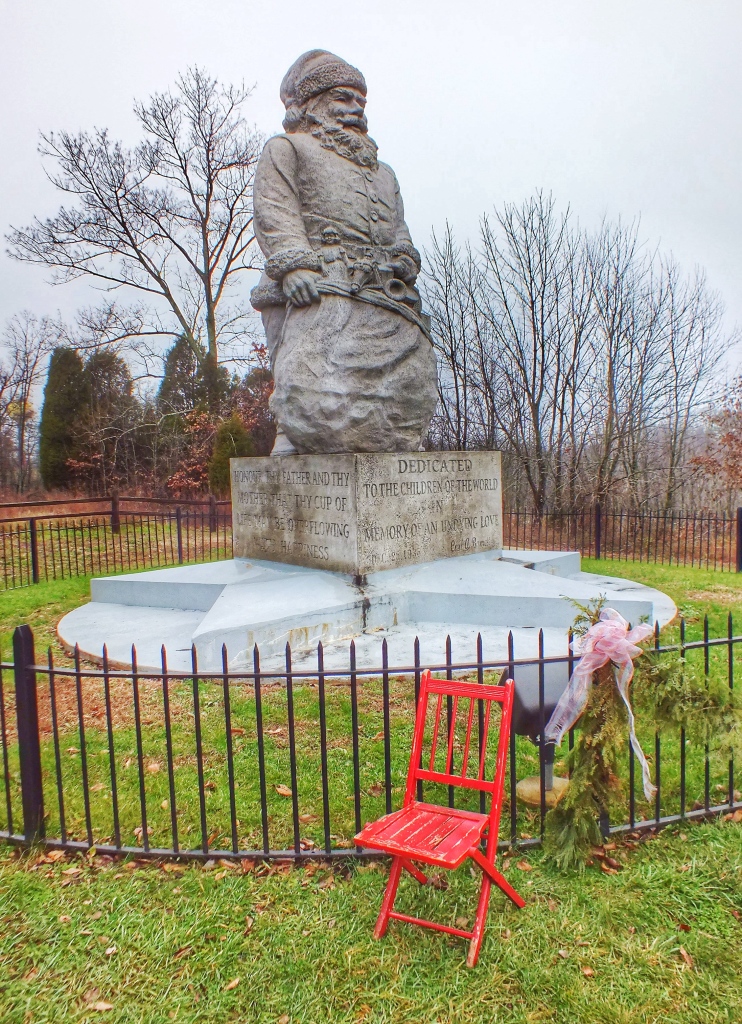 The base has engravings on three sides.

Either Santa speaks in Elizabethan English, or (more likely) Bennett confuses his mythology with his theology.

And that was it. We had done all we came to do. It wasn’t even 2:00 yet. The woman in the gift shop reminded me that we were in the central time zone — although she referred to it as “slow time.”

She also told us we should go see the Christmas Store. And since we had finished our plans for the day far ahead of schedule — and my wife’s always up for a Christmas Store — we drove to an as-yet-undiscovered part of town and parked. Here we saw the new post office. 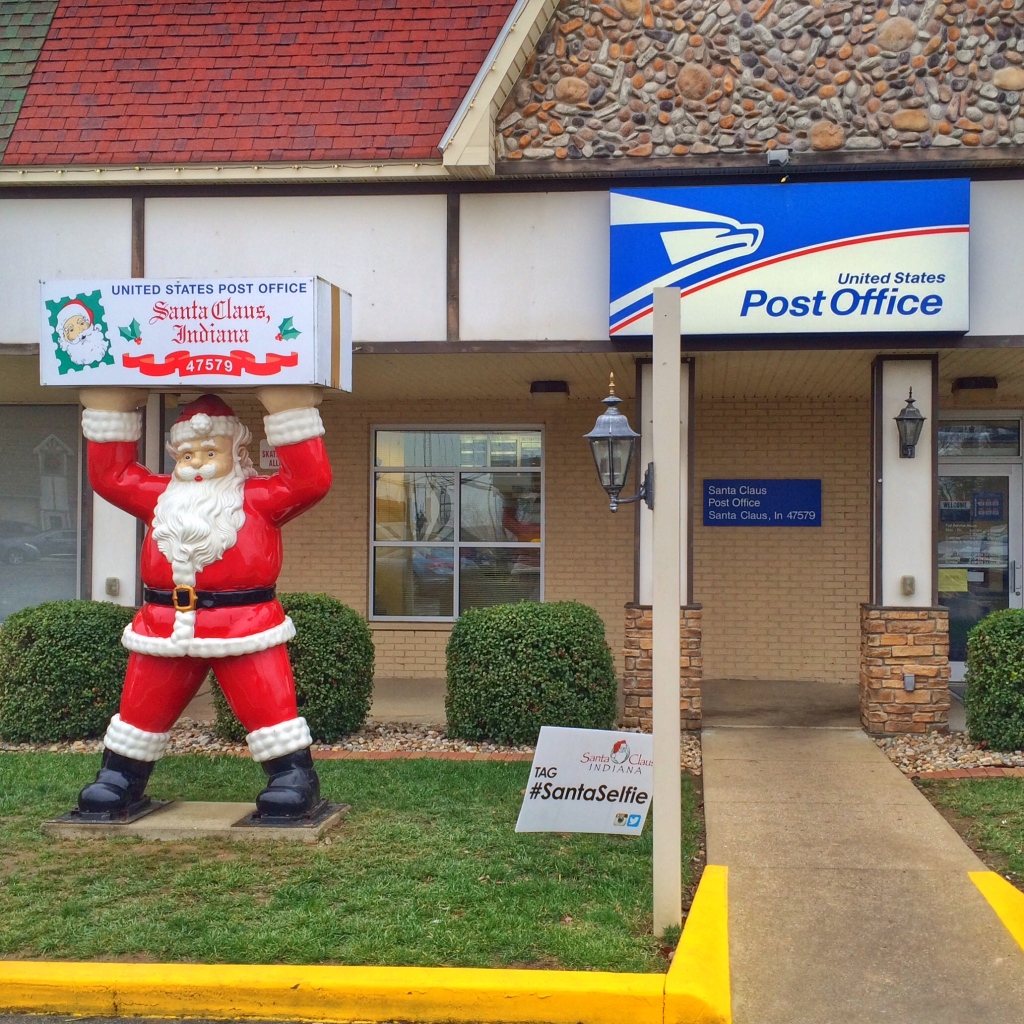 And the Santa Claus Christmas Store where we wandered for about 20 minutes. As you can see from this photo, the town has a lot of Santa Claus statues. 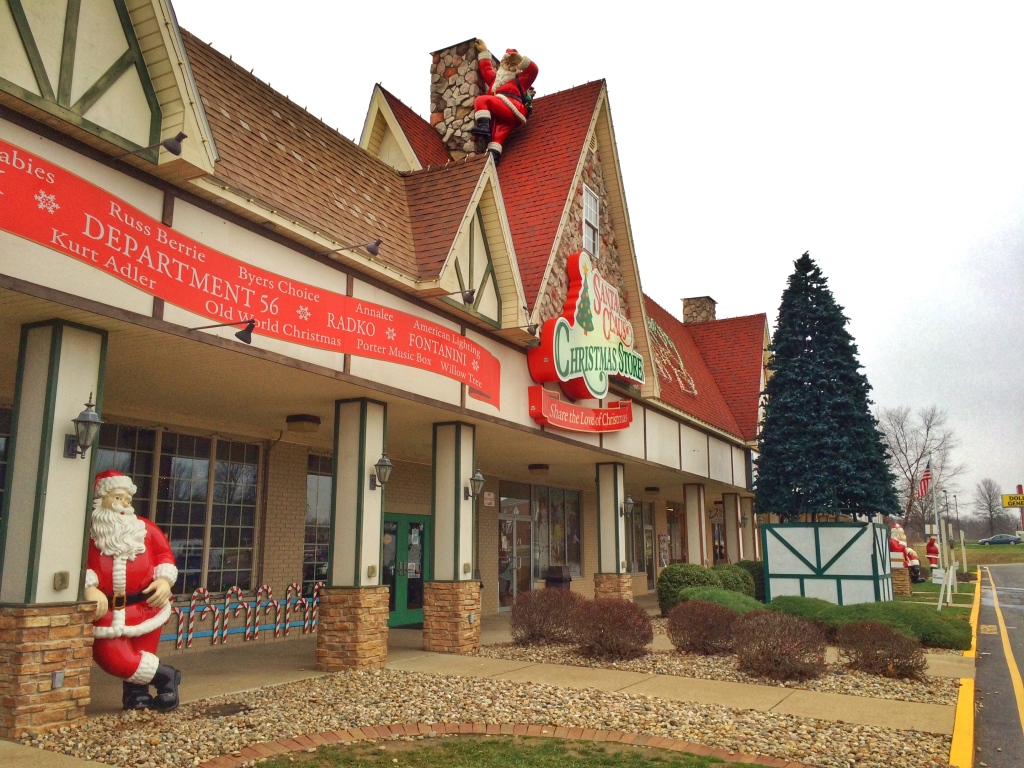 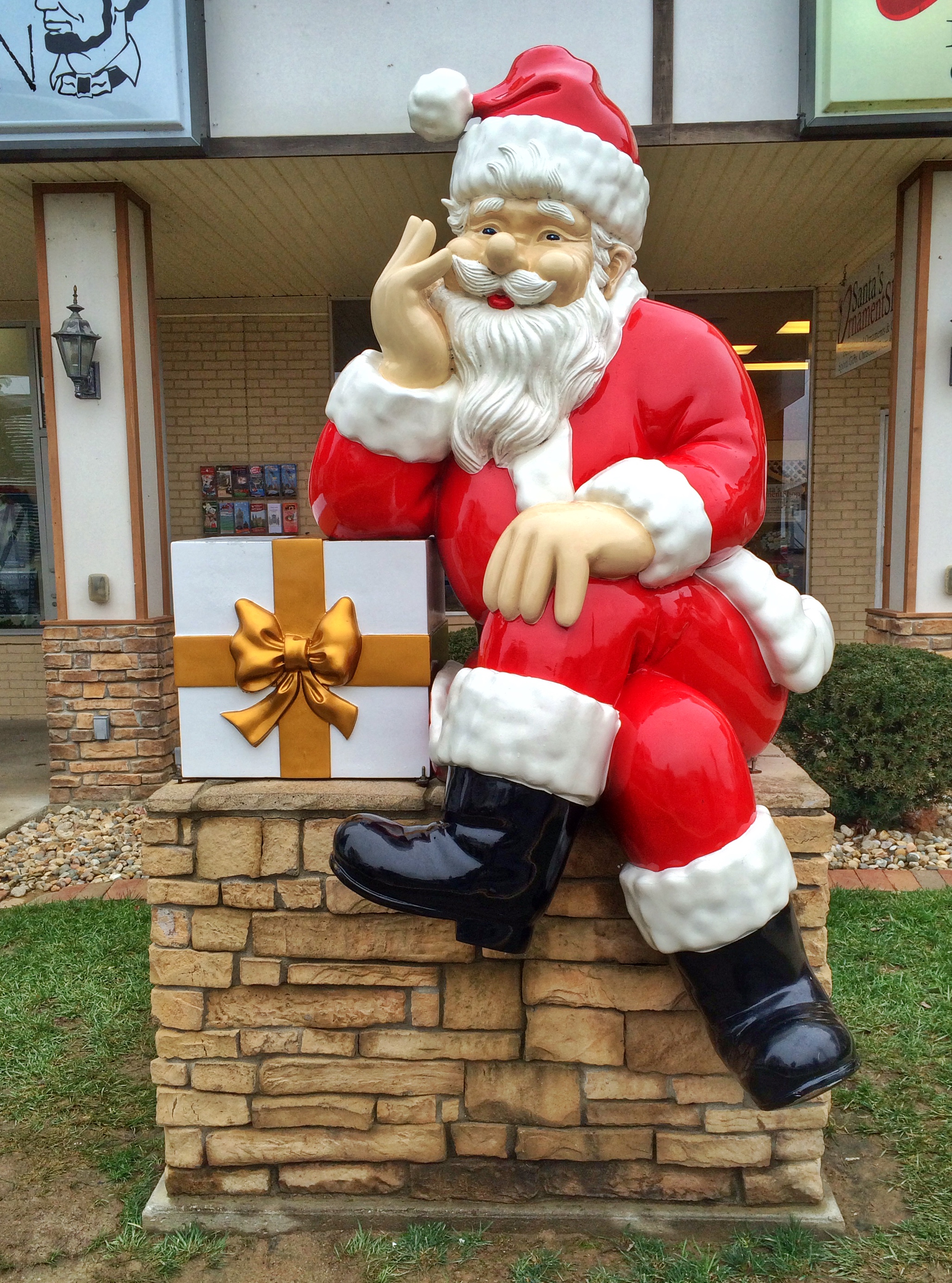 We also saw the entrance to Santa Claus Land of Lights. We were told that it was well worth the $13 admission because “they have over a million dollars of lights.”

We had almost three hours to kill. We hadn’t eaten since breakfast at the Brown Hotel, so we considered the local options. There were four. Subway, which my wife can’t stand. Two pizza places that got very low ratings on the internet. And the dining room at the Santa Claus Lodge, which was rated as mediocre. We drove over to take a look. There were several more Santa statues on the grounds, and I grabbed the opportunity for this photo. 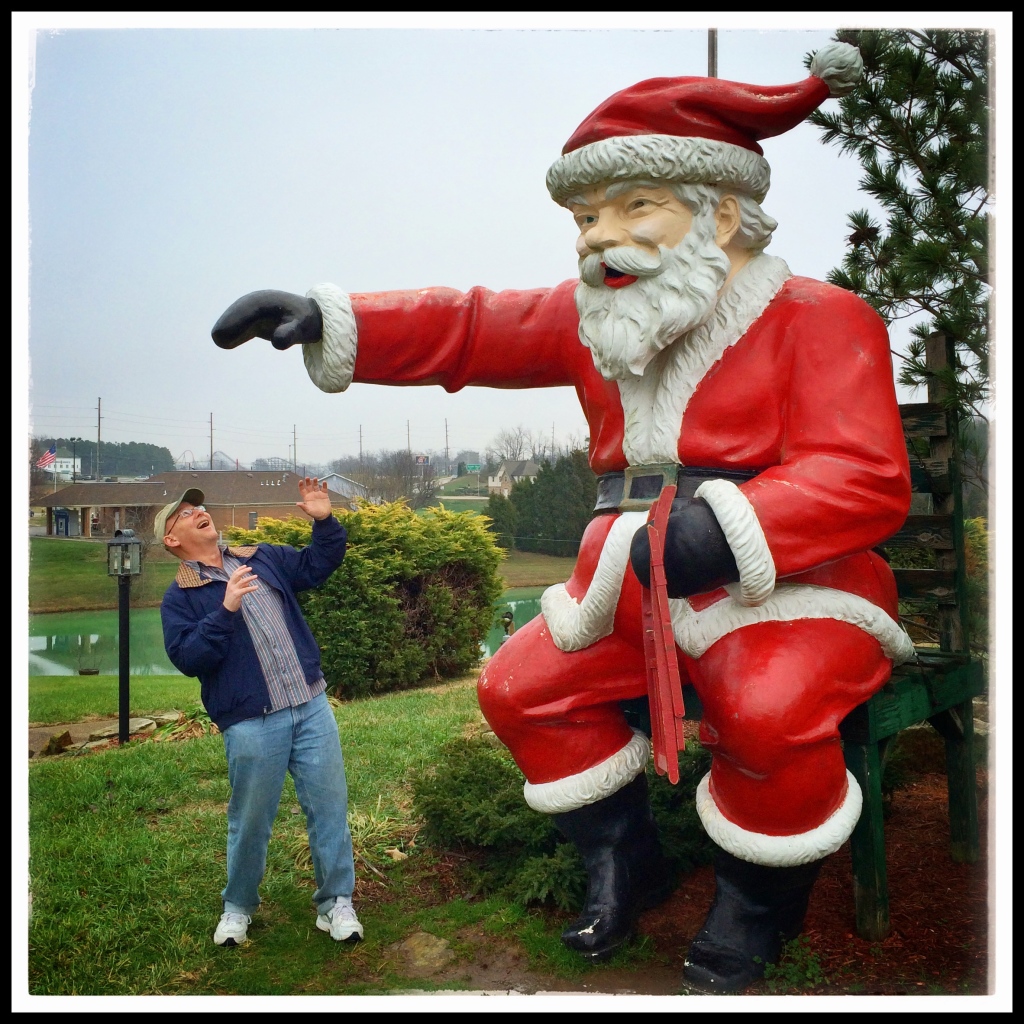 The lobby of the lodge was empty. We could hear a couple women chatting somewhere, but they never came out. The restaurant was in the basement. We wandered down a flight of wooden stairs and found ourselves in a small room with pine paneling, a buffet counter and empty chairs. The whole set-up looked as though it hadn’t been changed one bit since 1963. My wife took one look and said “no.” We didn’t see a single person during our entire time in the building.

And that was it for the local food options. There was a Kroger, and we debated wandering the aisles and finding stuff we could much on while we sat in our car for two-and-a-half hours. There was one other choice. The town of Dale, on the Interstate nine miles away, had a Wendy’s. I don’t care for Wendy’s. It’s on my list of “Only if there are no other options” restaurants. Which was the case. And so we drove to Dale. 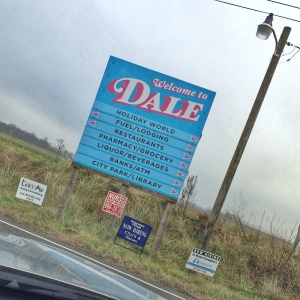 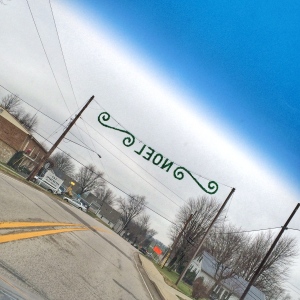 The Wendy’s was a couple miles outside town, by the Interstate exit. It looked lonely, and we were the only patrons for most of our visit. I took a photo of the parking lot from our table. 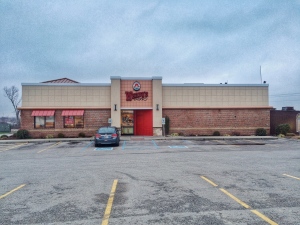 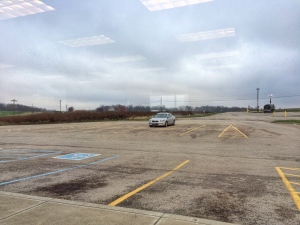 We tarried as long as it is possible to tarry over a meal at Wendy’s and then drove back to Santa Claus. We still had an hour to wait. We parked where we could see the entrance to Land of Lights and read and ate candy from Schimpff’s. There was a Christmas Tree in lights next to our car. We were very excited to see what it looked like when lit. And we were disappointed. 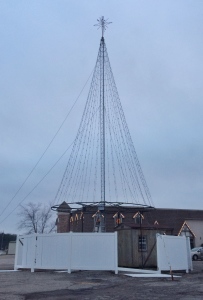 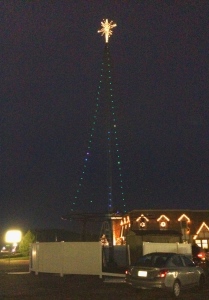 Before it got dark, it was the local hangout for Starlings. 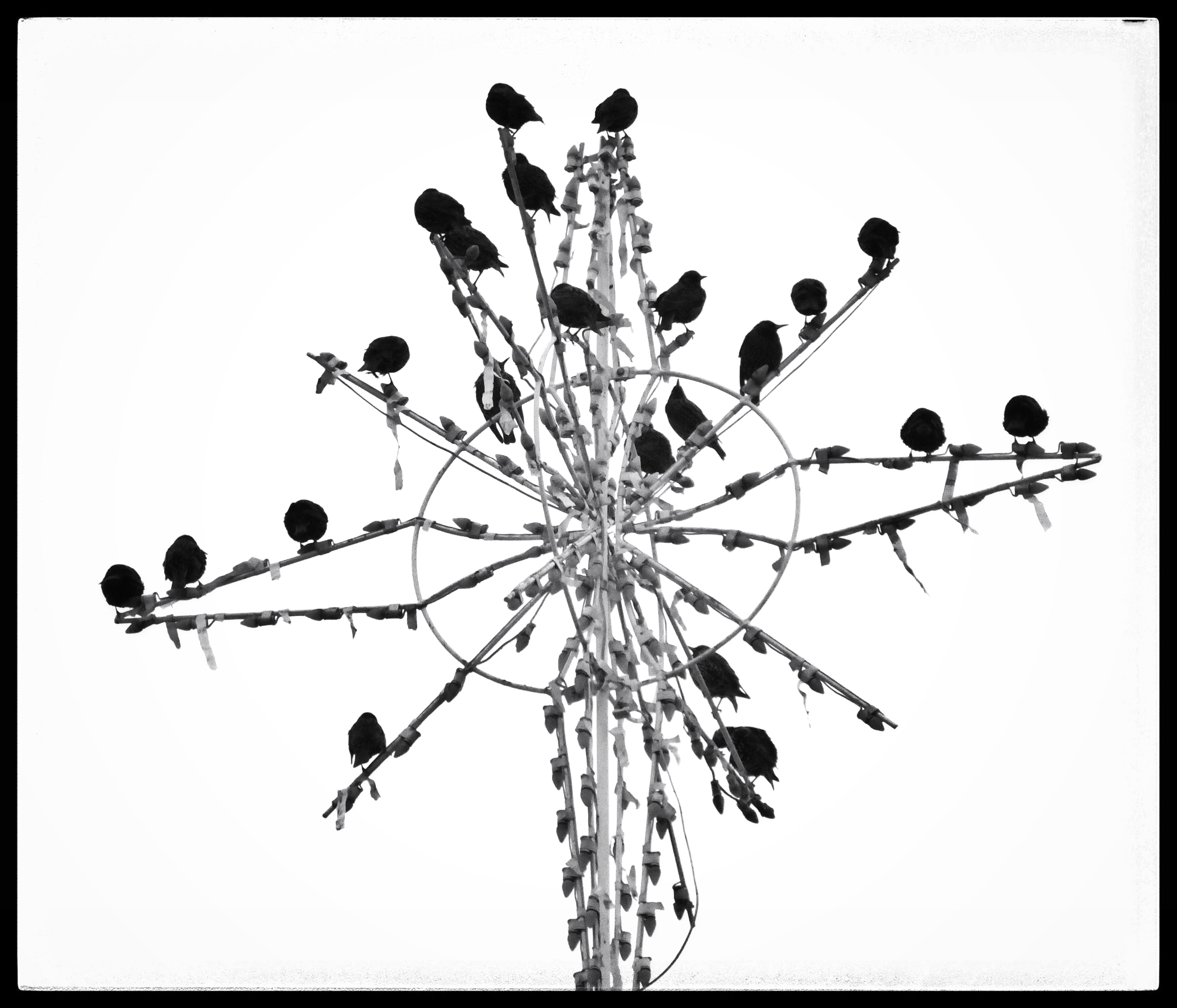 I was restless and got out to wander. I found this sign next to the Kroger. I don’t skateboard, but it would almost be worth it to be arrested by Santa. 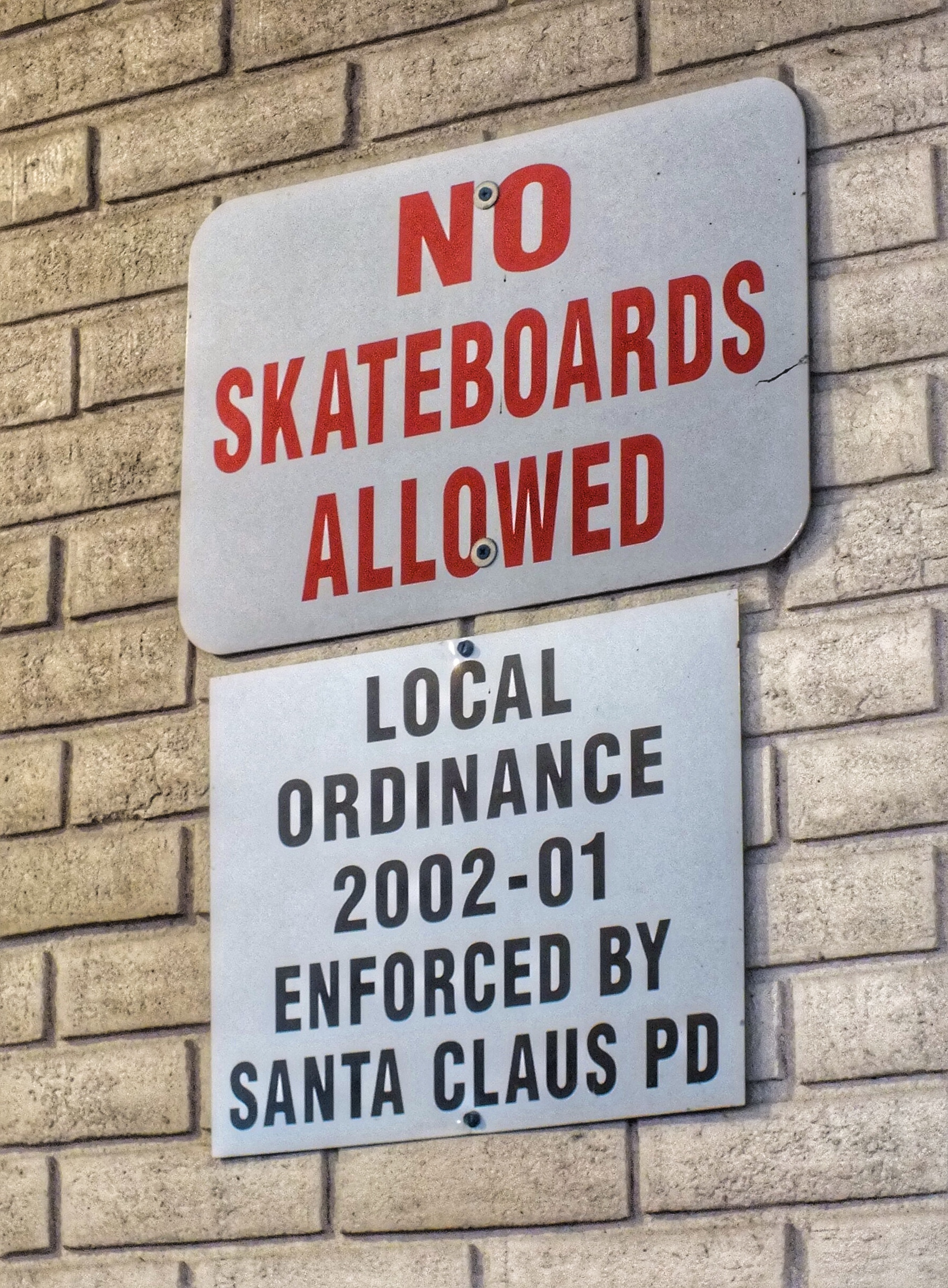 And yet another Santa statue. 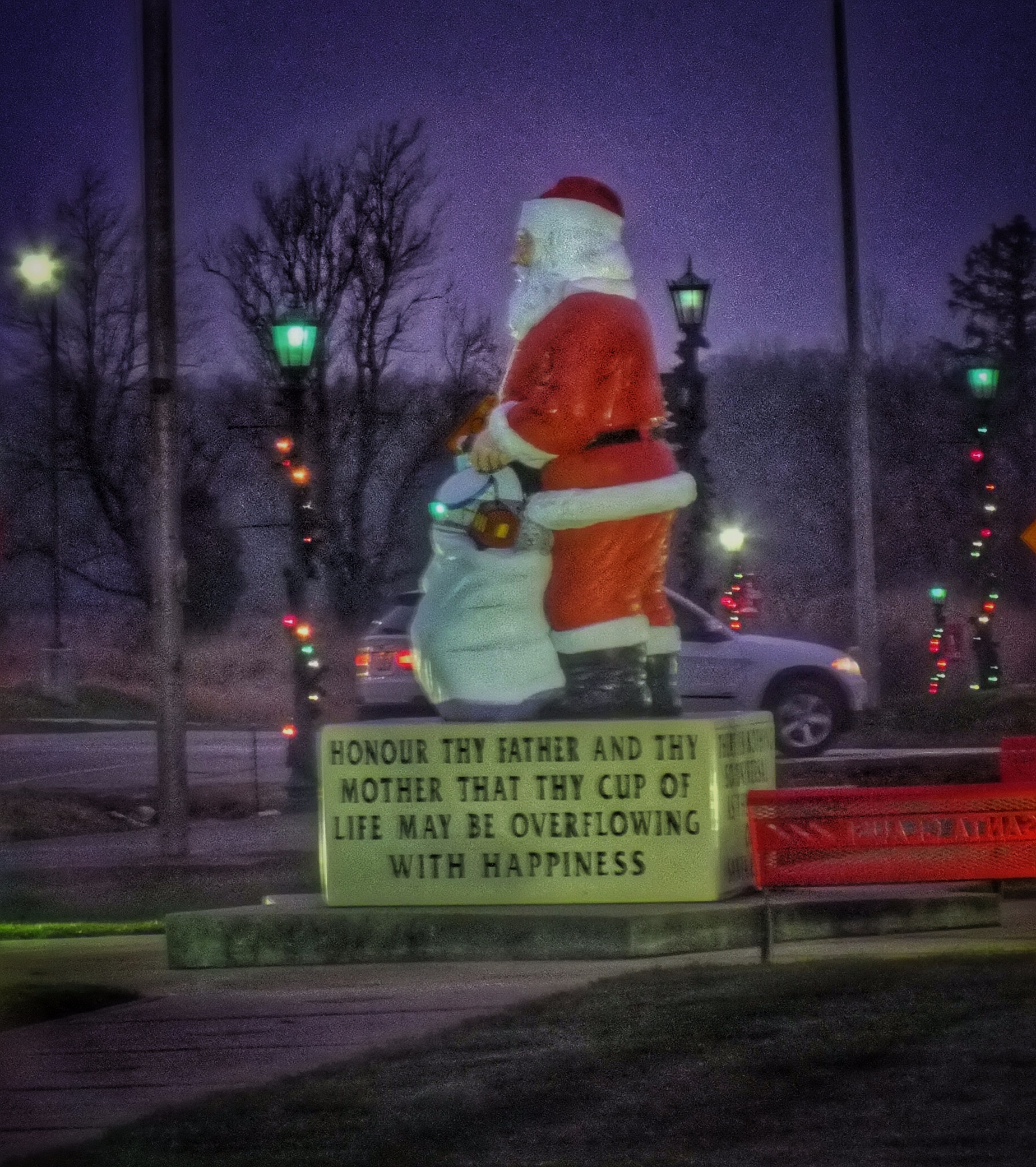 Finally it was time. We were the third or fourth car into Land of Lights. I tuned the radio to a Christmas Music station and … (I taped my iPhone to the roof and took a video, but it’s too long to put on my blog. Sorry.) 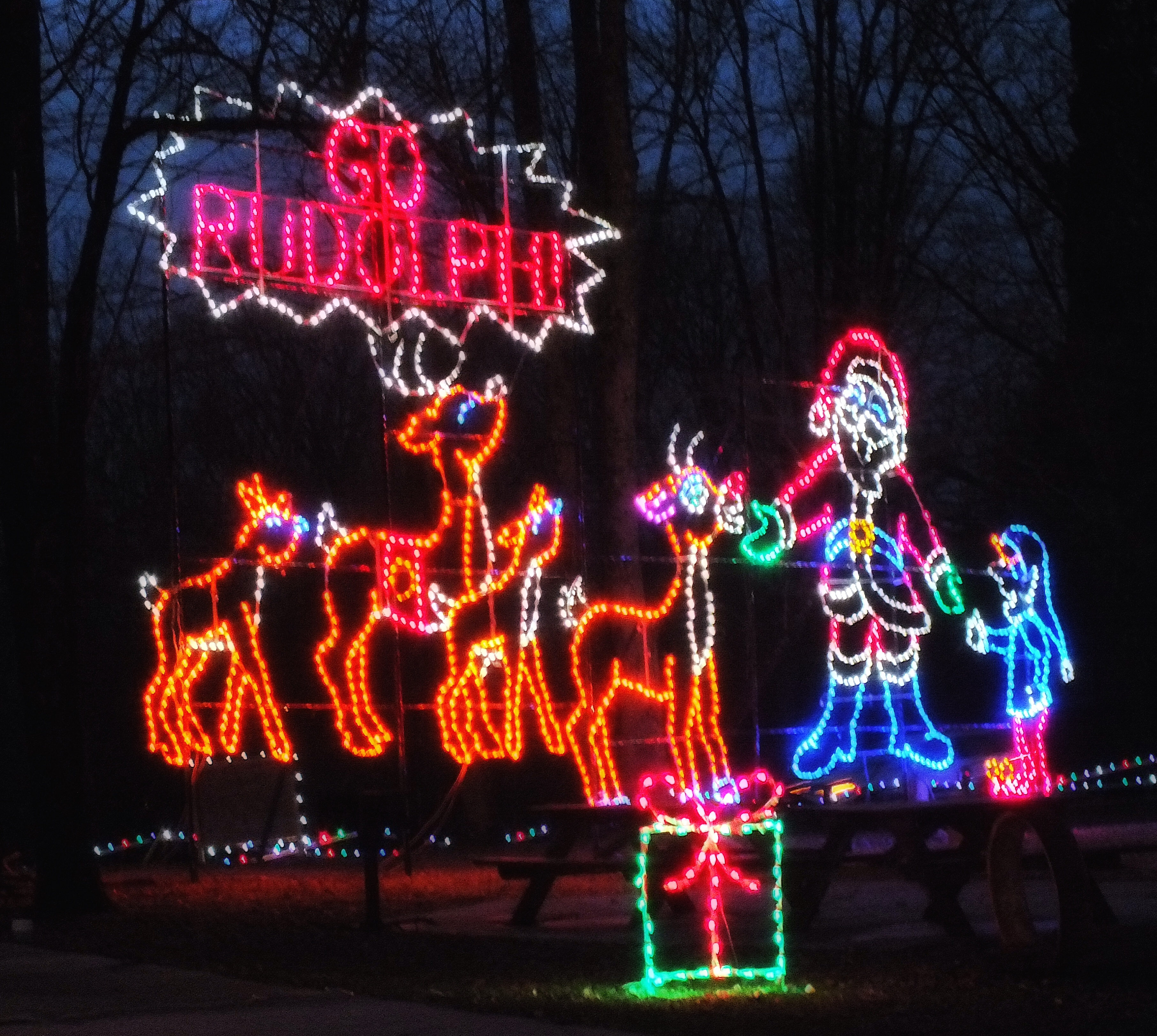 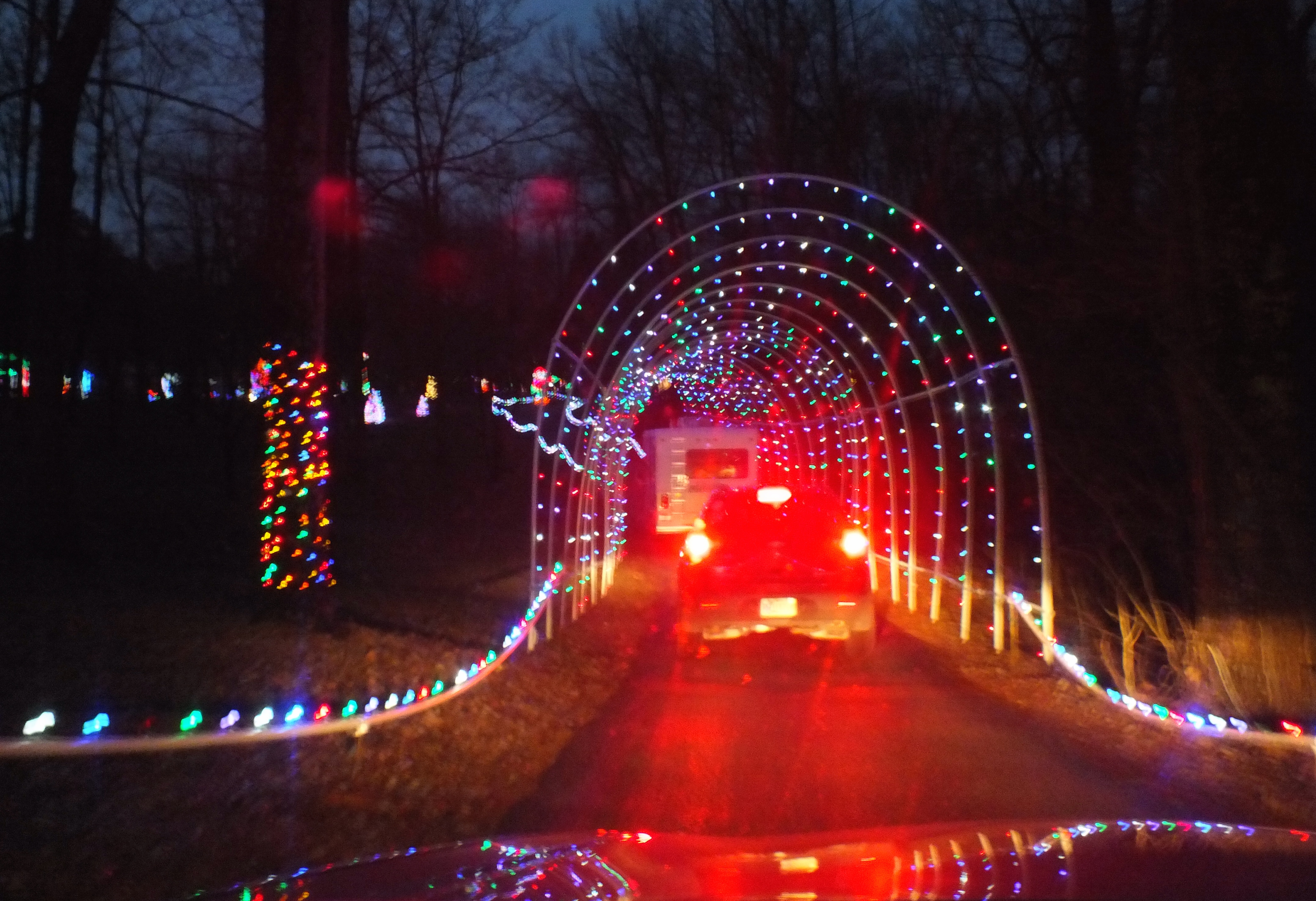 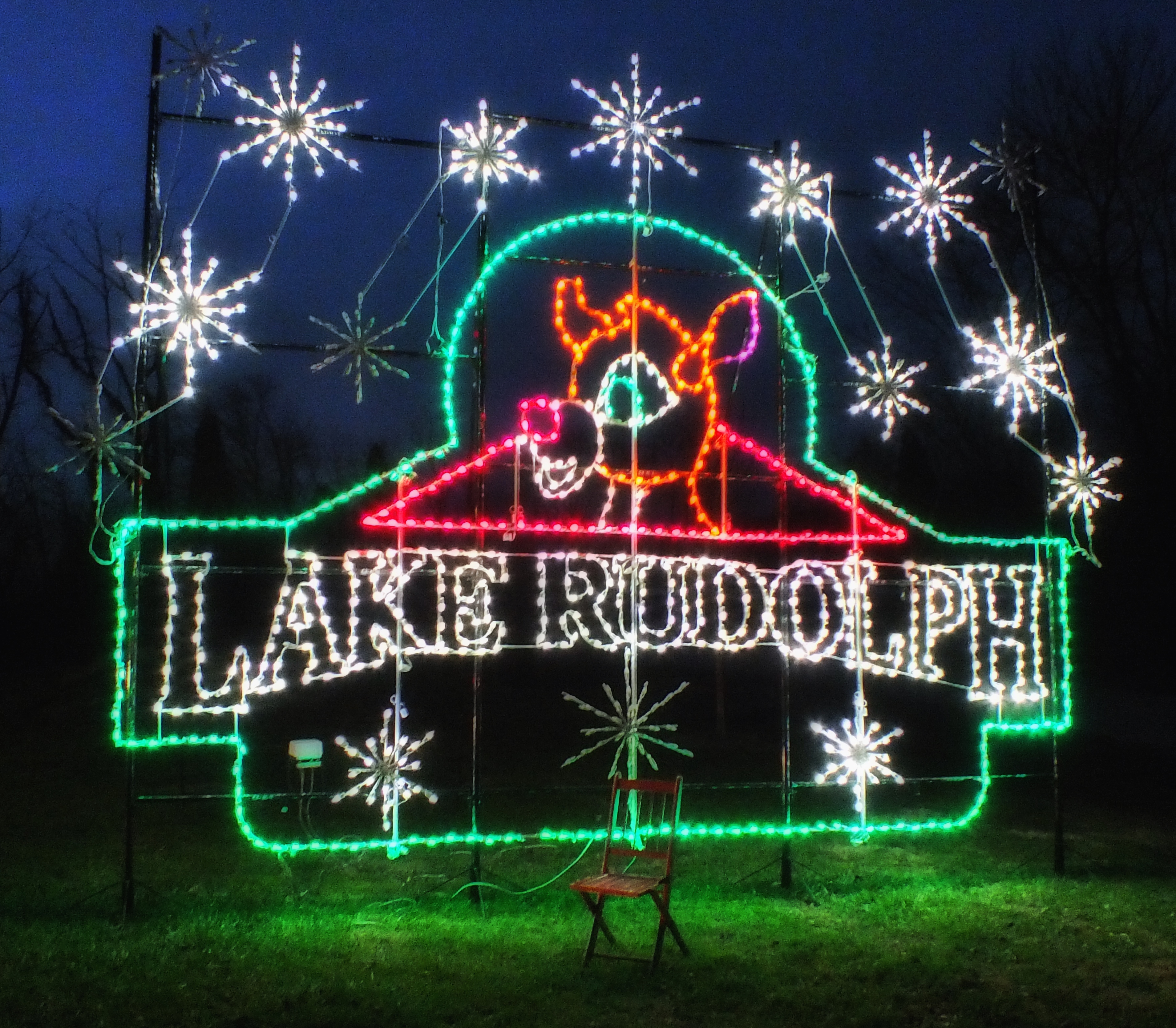 The displays told the story of Rudolph and were well done. My wife thought it was well worth the wait and the expense, so I’m happy.

There was also a bonus. With our admission to the light show, we received a coupon for a free photo with Rudolph. I couldn’t pass that up, so we returned the the Christmas Store.

The girl at the register thought I was certifiable, but I had the coupon, so what could she do? 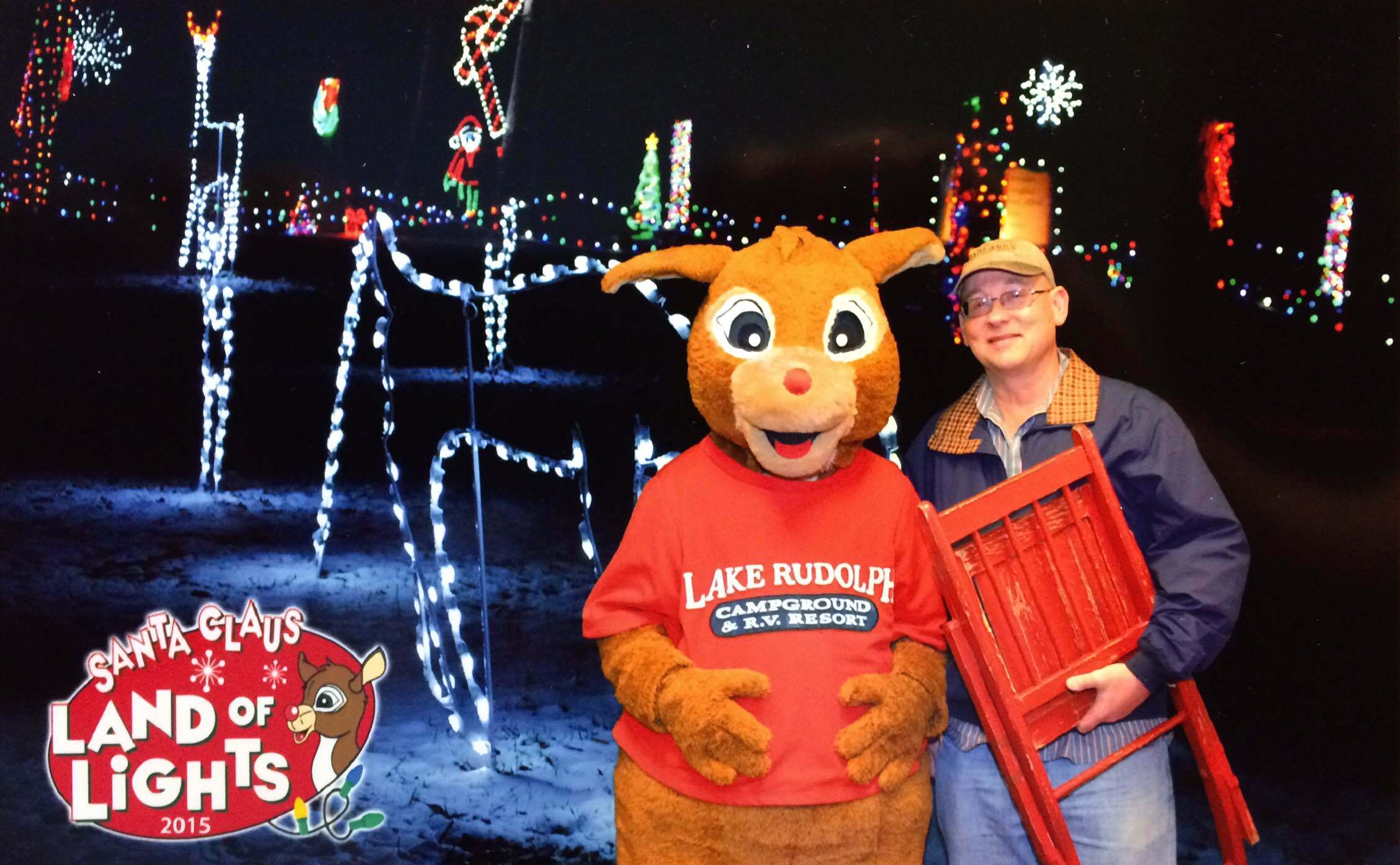 I set my GPS for a Hampton Inn in Evansville, about an hour away. When we got there, I had no idea where we were in relation to the town, but it was a fine and comfortable night.