The town of Colorado City, established in 1859, was the first permanent community in the Pikes Peak region. In 1917, it was annexed by Colorado Springs. To celebrate this exciting history, Old Colorado City puts on a three day festival of silliness over Memorial Day Weekend every year. Three or four blocks of main street are blocked off and filled with booths. We decided to stop by, just to say we’d done it. 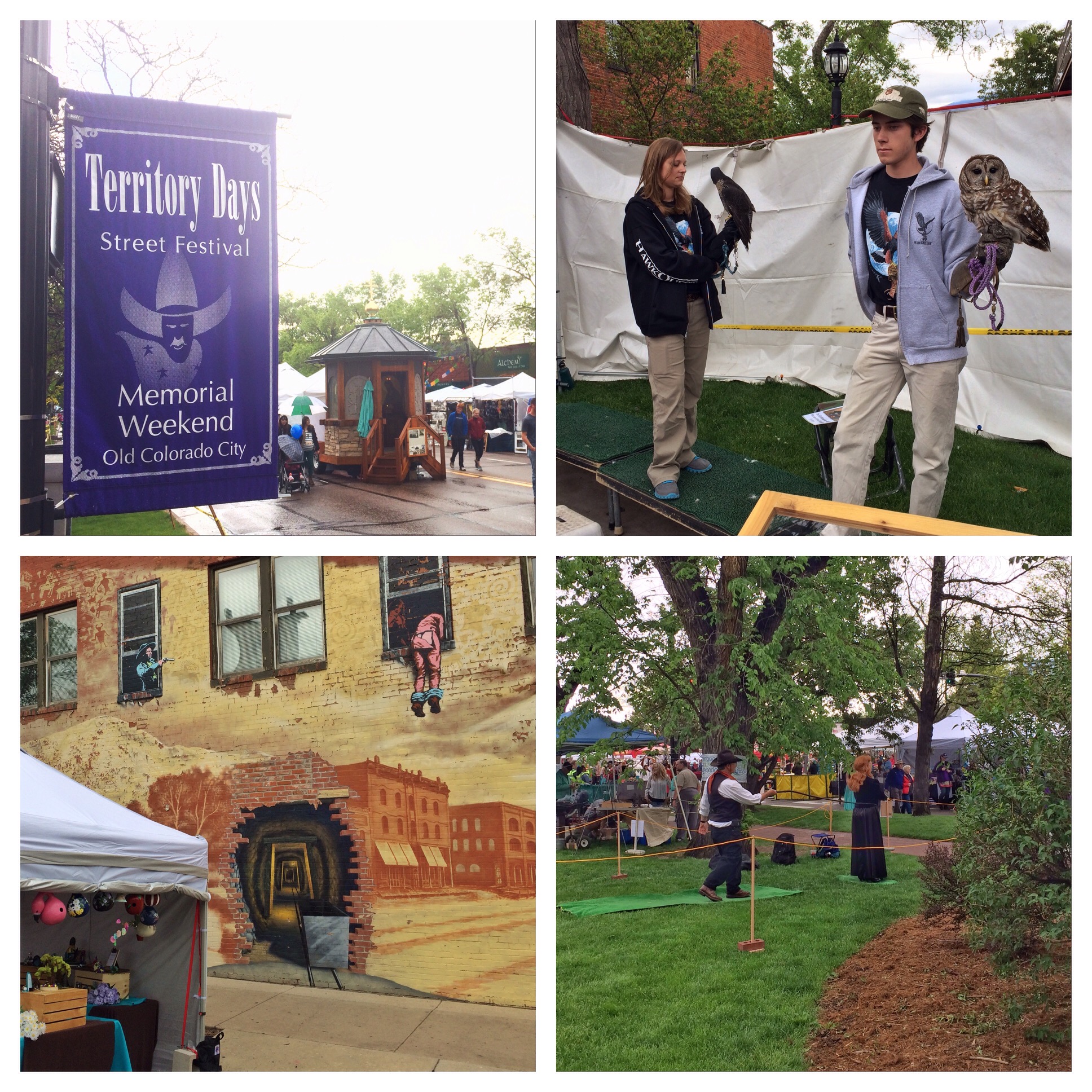 Parking was at a premium, but we found a free space on the street about two blocks away—right in front of a lot that was charging $10. We strolled along one side of the street to the far end of the fair. We passed: 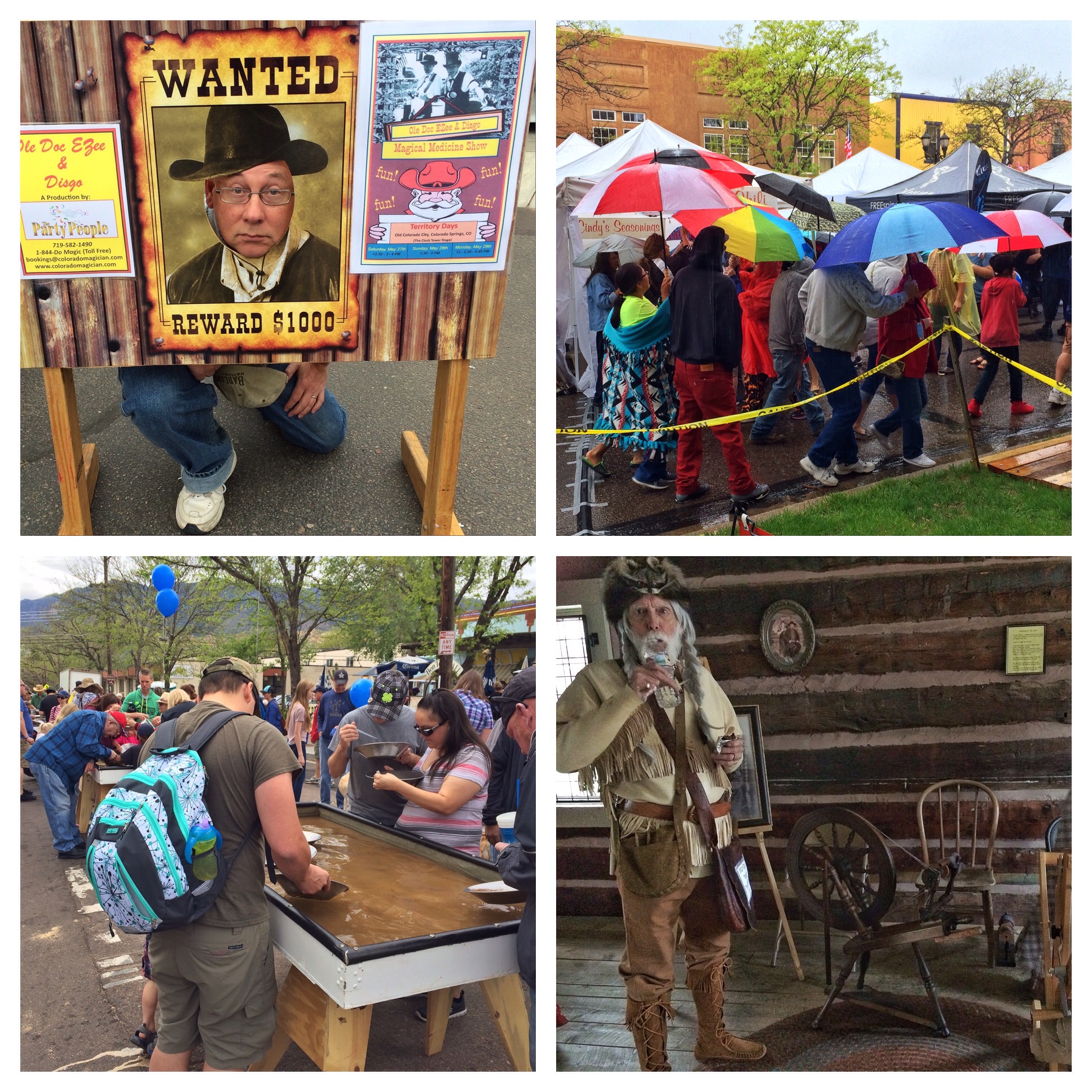 We made it about a third of the way back down the other side of the street when the rain began. We ducked inside the old county office building where we found a few displays and a guy in mountain man clothes who lectured us on remembering the purpose of Memorial Day and then told us the rain wasn’t due to stop until 4:00. 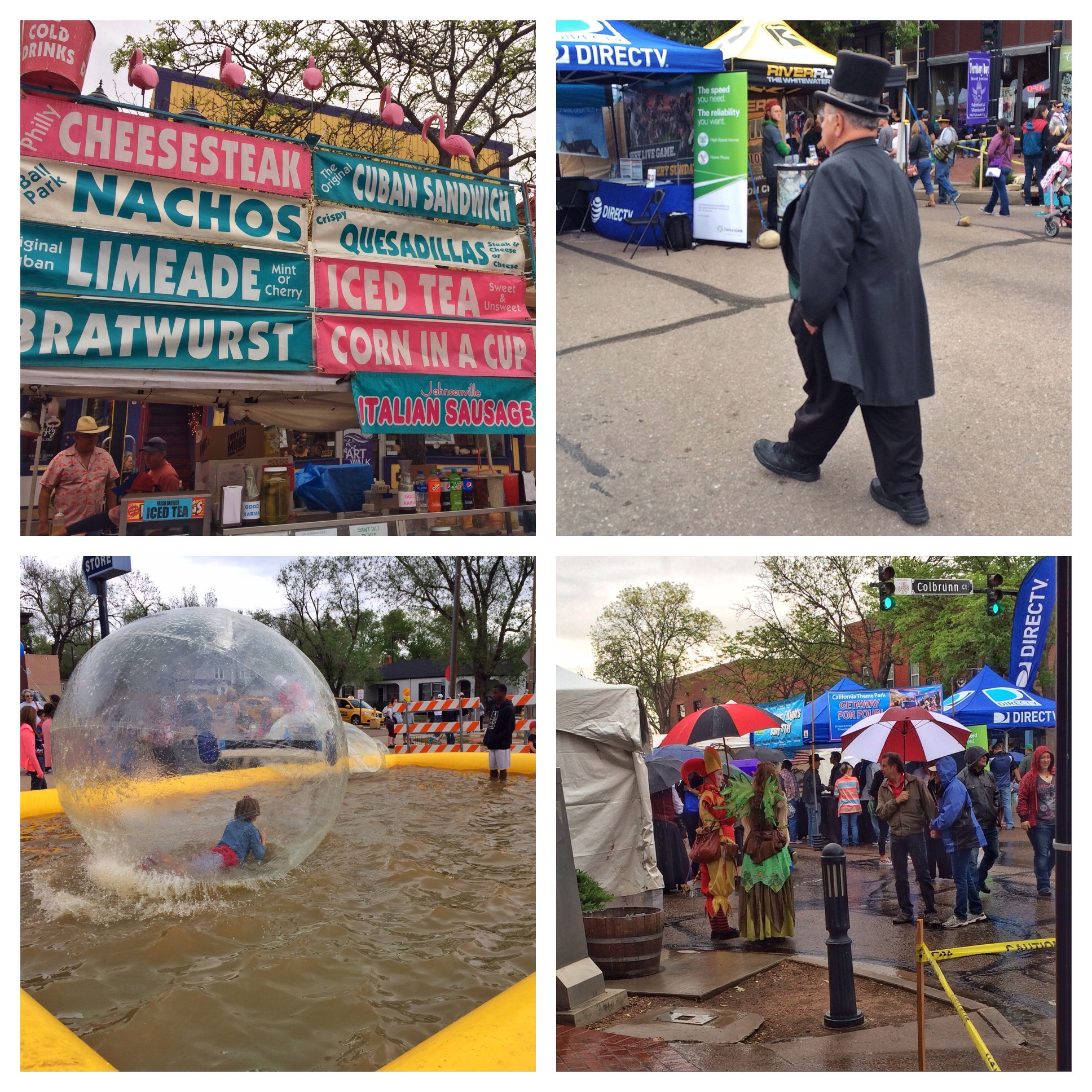 Other people were finding shelter in the building too, and it soon became crowded. We dashed to a nearby storefront and took shelter under an awning, but it leaked and we were getting wet. Our next port was a store full of a  collection of odd and silly gifts. When the saleslady offered to sell us ponchos for $2.00 we agreed. It took her five minutes to write out a sales receipt by hand. When we got outside and opened the ponchos up, we discovered they had no sleeves. The rain was coming down hard and it was getting chilly. We passed Jake and Telly’s Greek Taverna, which happens to be on my list of places to go, so we stopped in for lunch. The rain stopped and the sun came out about the time we were done eating. We headed back outside and walked back up the way we’d come to see what we’d missed. We shared a funnel cake as we walked and, due to later events that I won’t go into, I’ve decided it will be my last funnel cake ever. 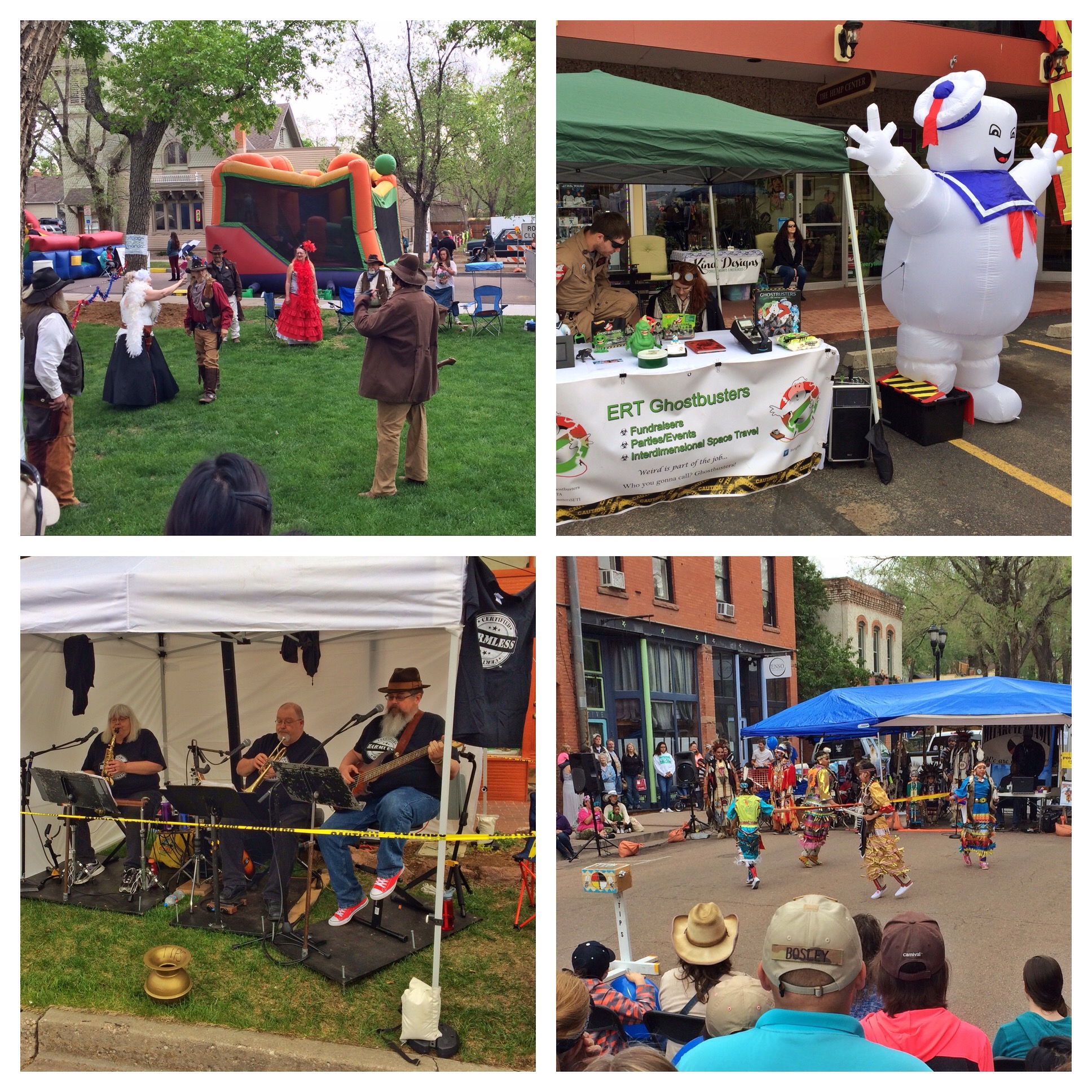 We hadn’t gotten too far when it clouded over and started raining again. We headed for the car—by this time I was shaking with cold—and made it just before another deluge hit the area. All in all, we had more fun that we expected to. As street fairs go, it’s a pretty good one. We don’t feel compelled to go again, but you never know. 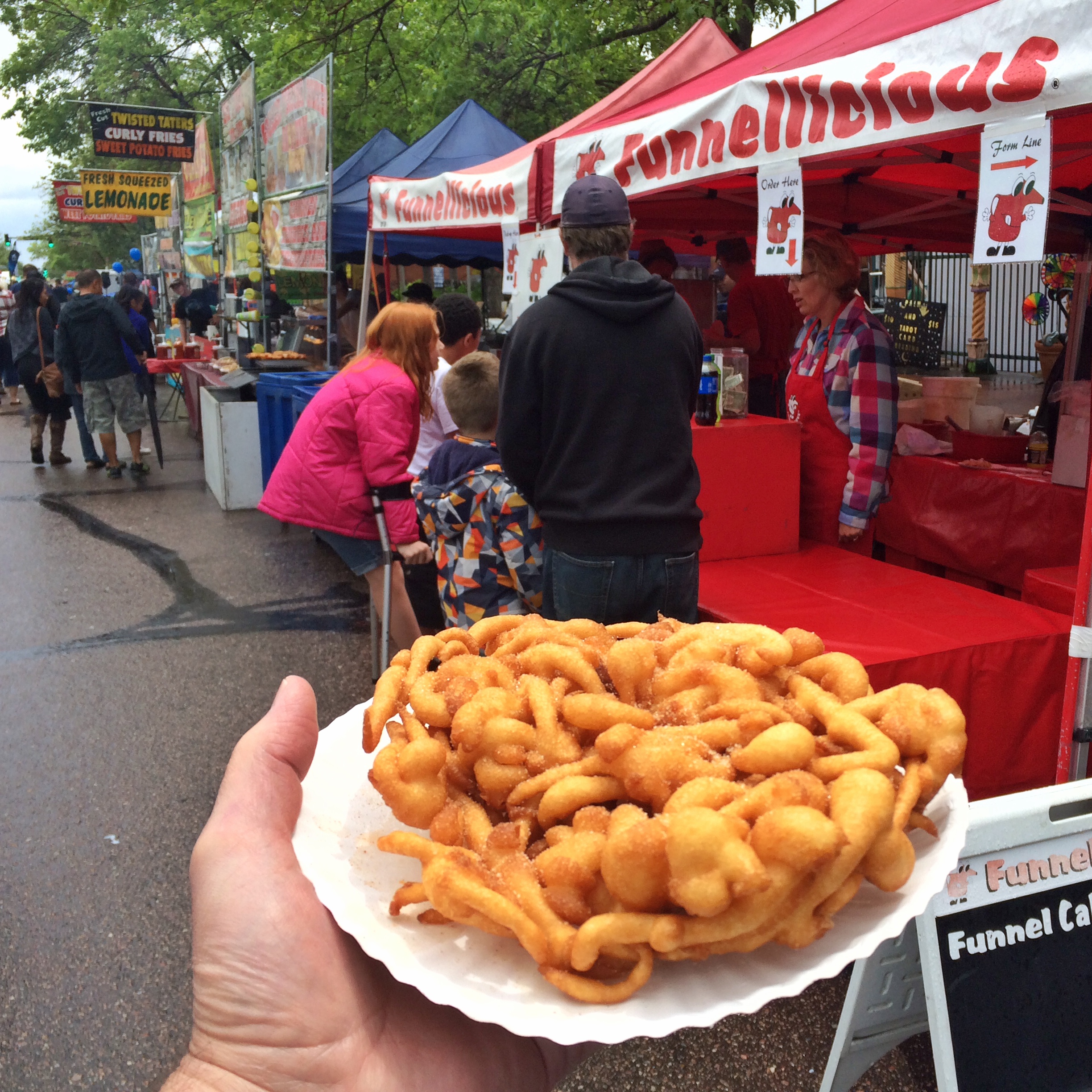