The Game that Wasn’t

When we moved to Colorado Springs, I found out that the city is home to a Triple-A baseball team, the Colorado Springs Sky Sox. They’re affiliated with the Milwaukee Brewers. I’d never been to a Triple-A game, and of course I decided I wanted to go sometime — if possible when the Iowa Cubs were in town.

Fast forward to July 4th. We were discussing whether we wanted to see fireworks. We had three options—Palmer Lake (which only has one road through town and little parking), Colorado Springs (where we heard that it often takes two hours to get out of the neighborhood after the show), and the Sky Sox game. We checked the Sky Sox, but the game was sold out. The other options seemed daunting. We ended up watching the last few minutes of the Palmer Lake show from five miles away.

Anyway, when I was on the Sky Sox site, I noticed that they had fireworks every Friday. And on Friday, July 14, the Iowa Cubs were in town. I love it when a plan comes together. I bought two tickets in the fourth row right behind home plate.

When the 14th rolled around, sunny Colorado wasn’t sunny. It had been cloudy and rainy all day. I kept checking the web site to see if the game was cancelled, but finally we had to just go. We arrived around 6:00, an hour before scheduled game time. 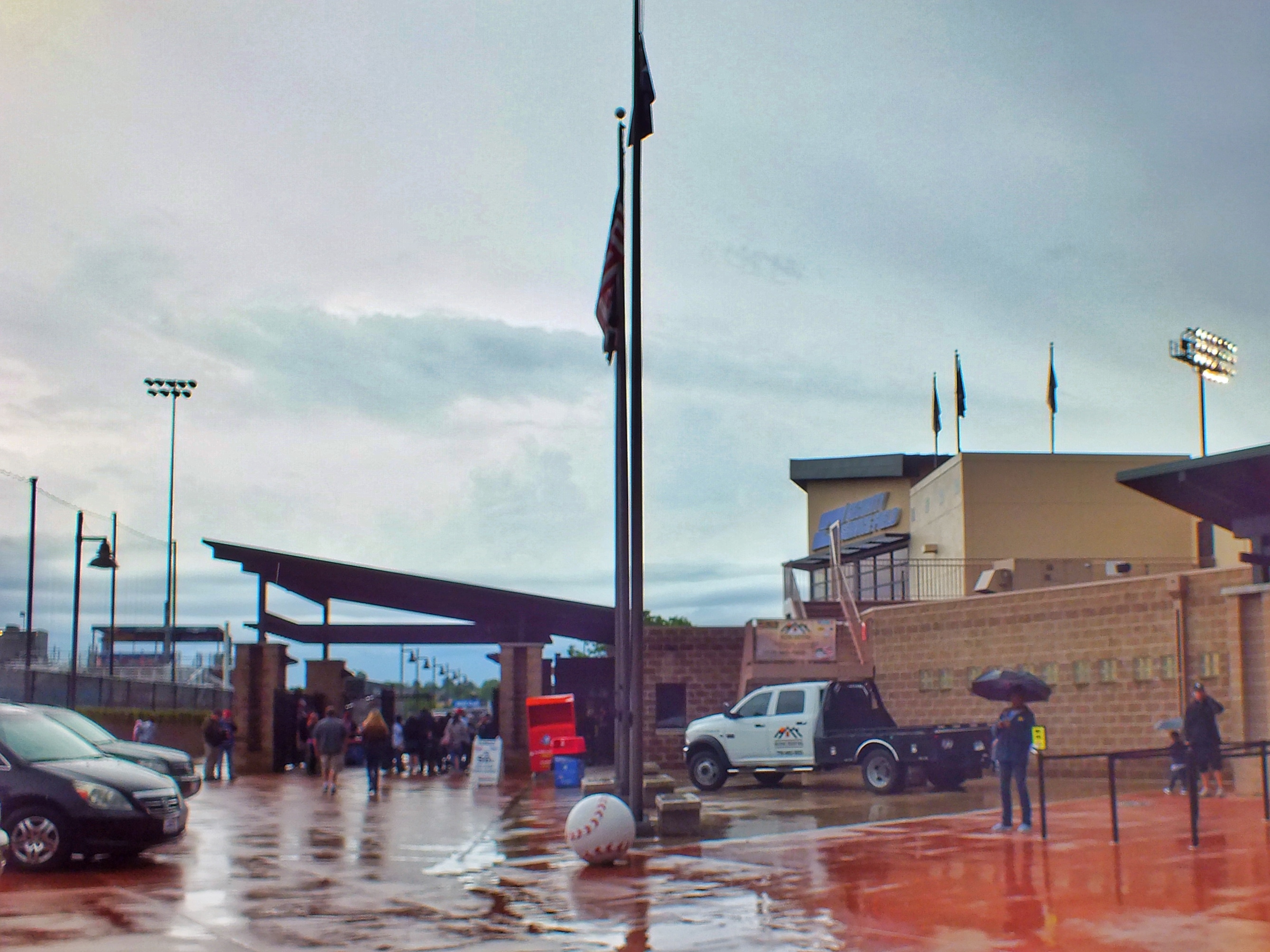 It cost $5 to park in the lot. As we walked through the lot to the gate, I noticed a lot of people carrying yellow boxes with a black zig-zag stripe around it. I heard some lady mention bobble-head and figured out they were giving out Charlie Brown bobble-heads. But not to us. They were all gone when we entered the park at about 6:30. It’s odd how disappointing it can be not to get something you didn’t know existed moments before.

We headed down to our seats. They were great, just a few feet from the net. They were also wet. An usher wiped them off for us, and we sat down and stared out at wet grass and a wet, tarp-covered infield. It was still drizzling. The stadium is well kept-up but smaller than I would have expected for a Triple-A park. 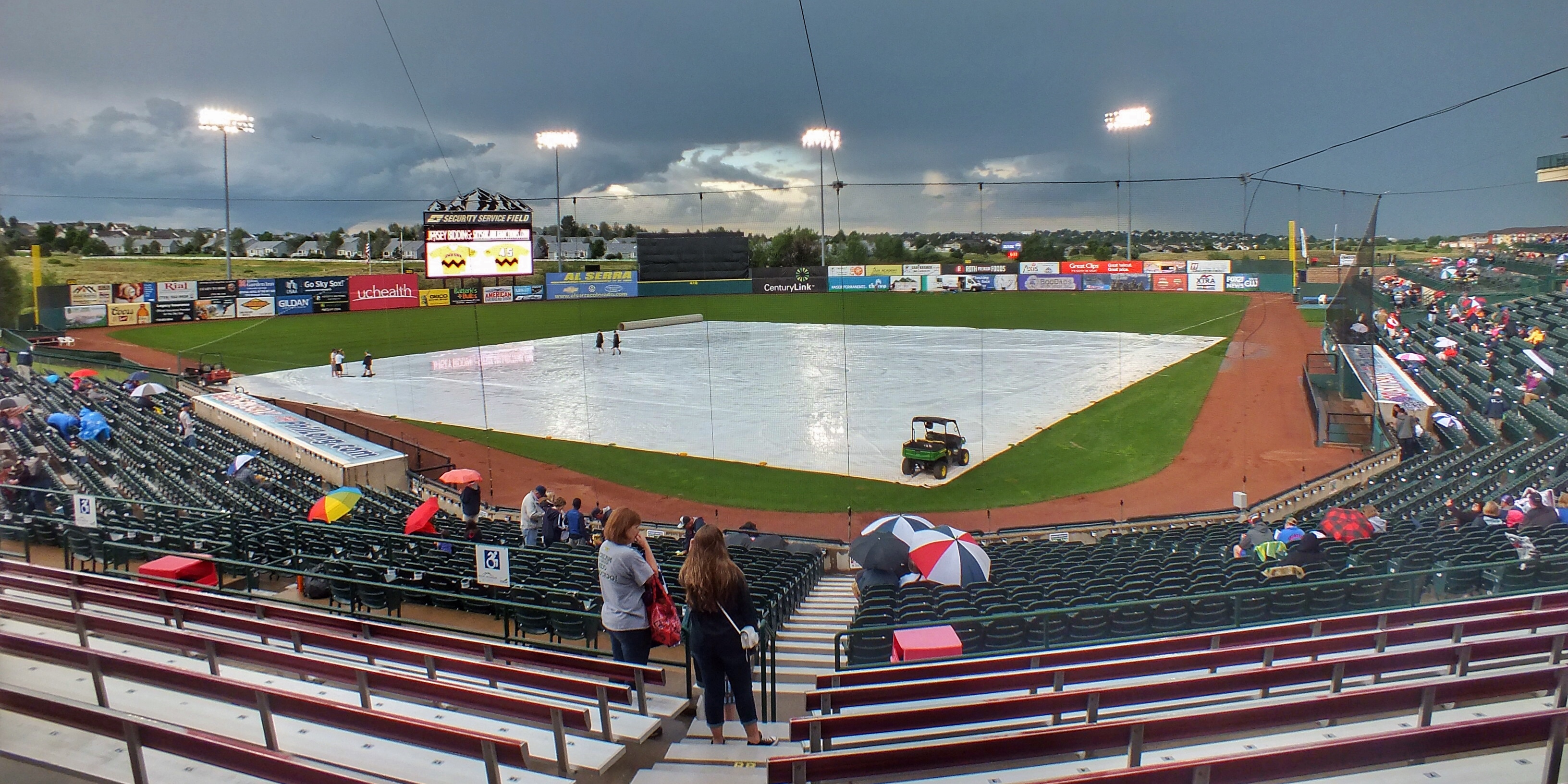 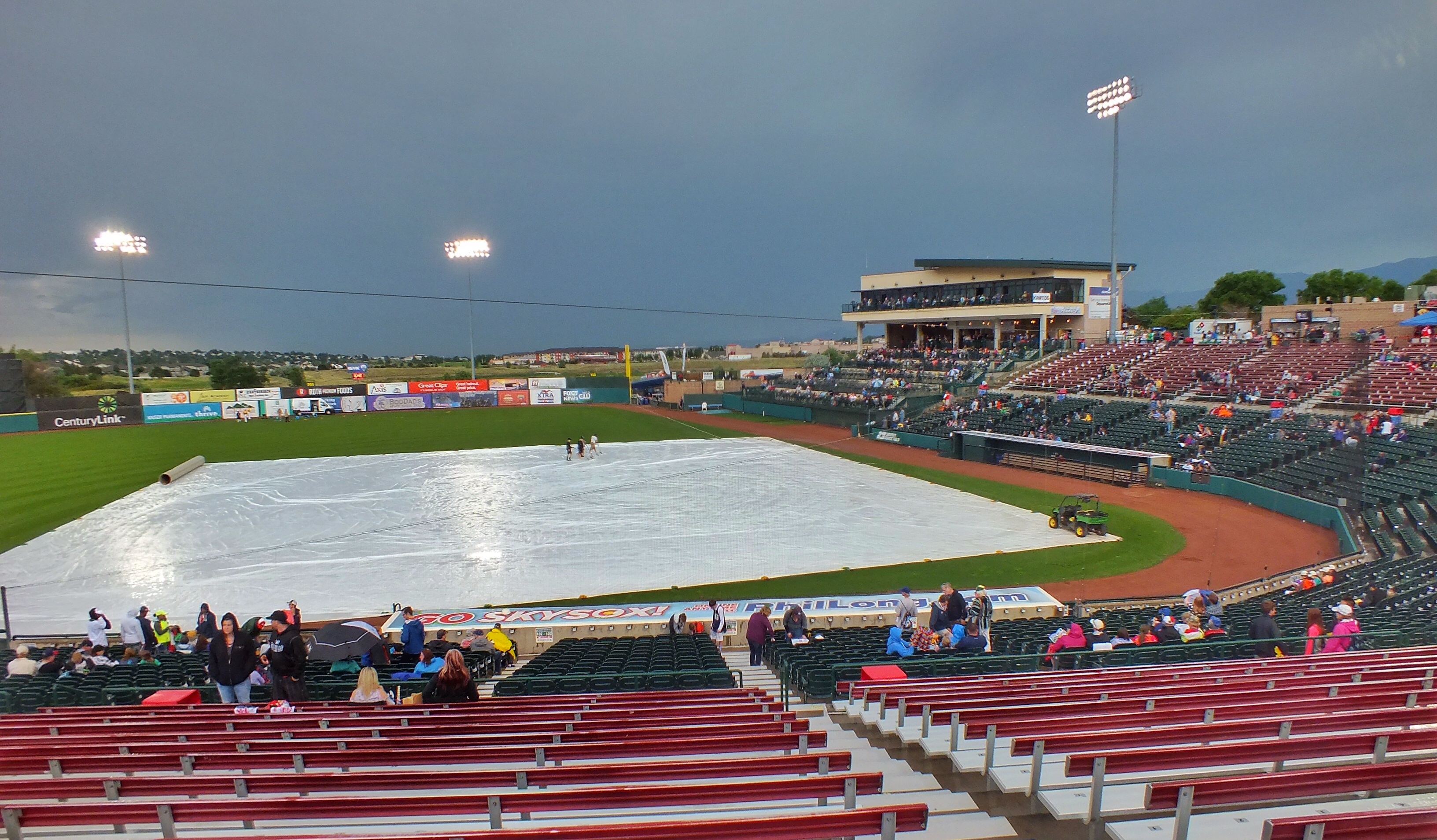 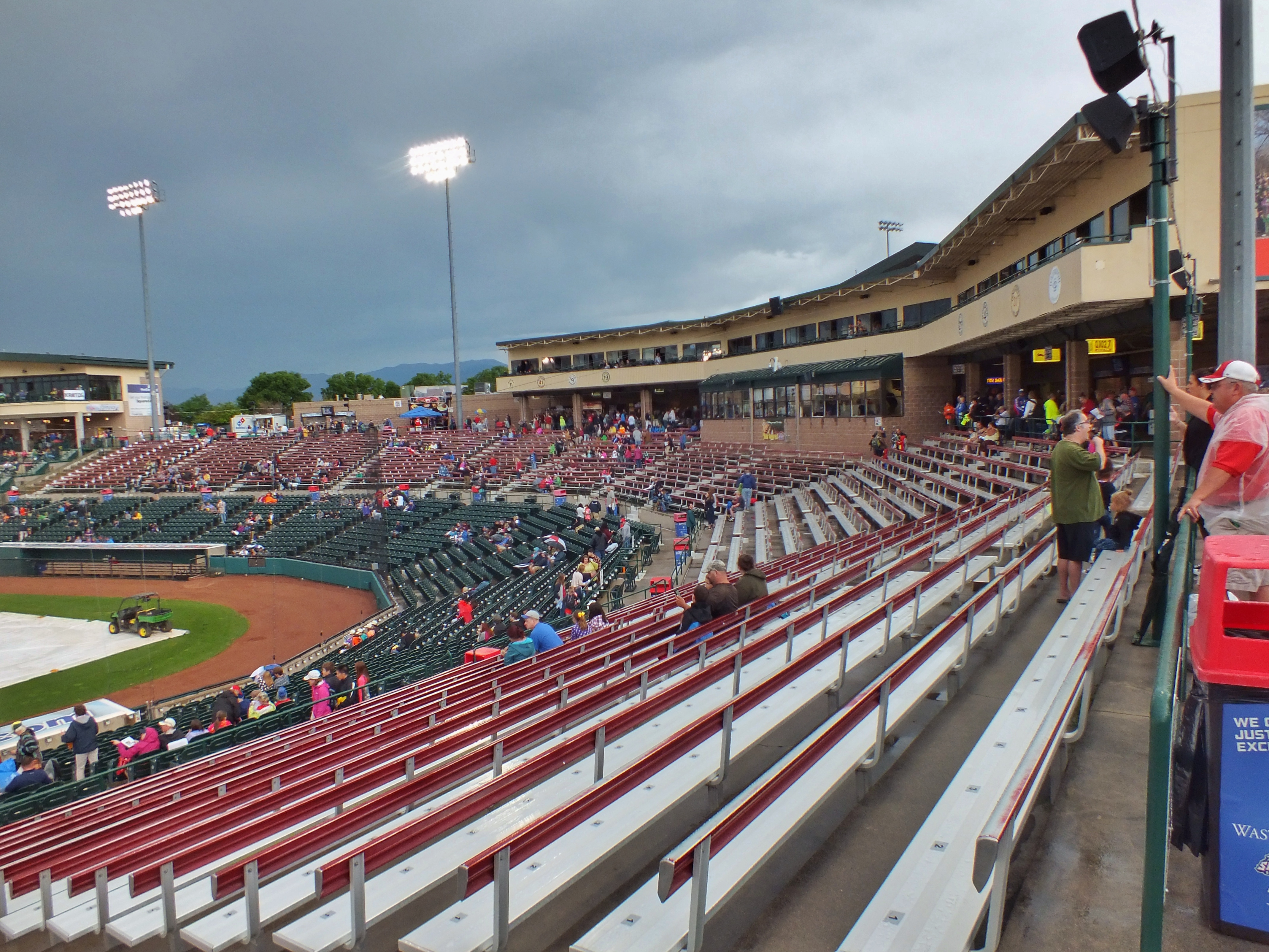 I noticed that it was Peanuts night. Peanuts cartoons played on the scoreboard. Sox the Fox mascot and the few Sky Sox players who came out of the clubhouse were wearing jerseys that looked like Charlie Brown’s shirt.

I wandered up to the concourse and filled out a registration to win World Series tickets. In return I got a Sky Sox terrible towel and red, white, and blue necklaces. I paid $20 for two glasses of Pepsi and a bag of peanuts. On my way back to our seats, I saw a family of four with four bobble-heads. On the spur of the moment, I stopped and asked if they’d part with one of them for $20. A girl about 16 said she would. I returned to my seat and showed my wife my prize. She was thrilled. Notice that Charlie is a leftover from a Brewers’ promotion. 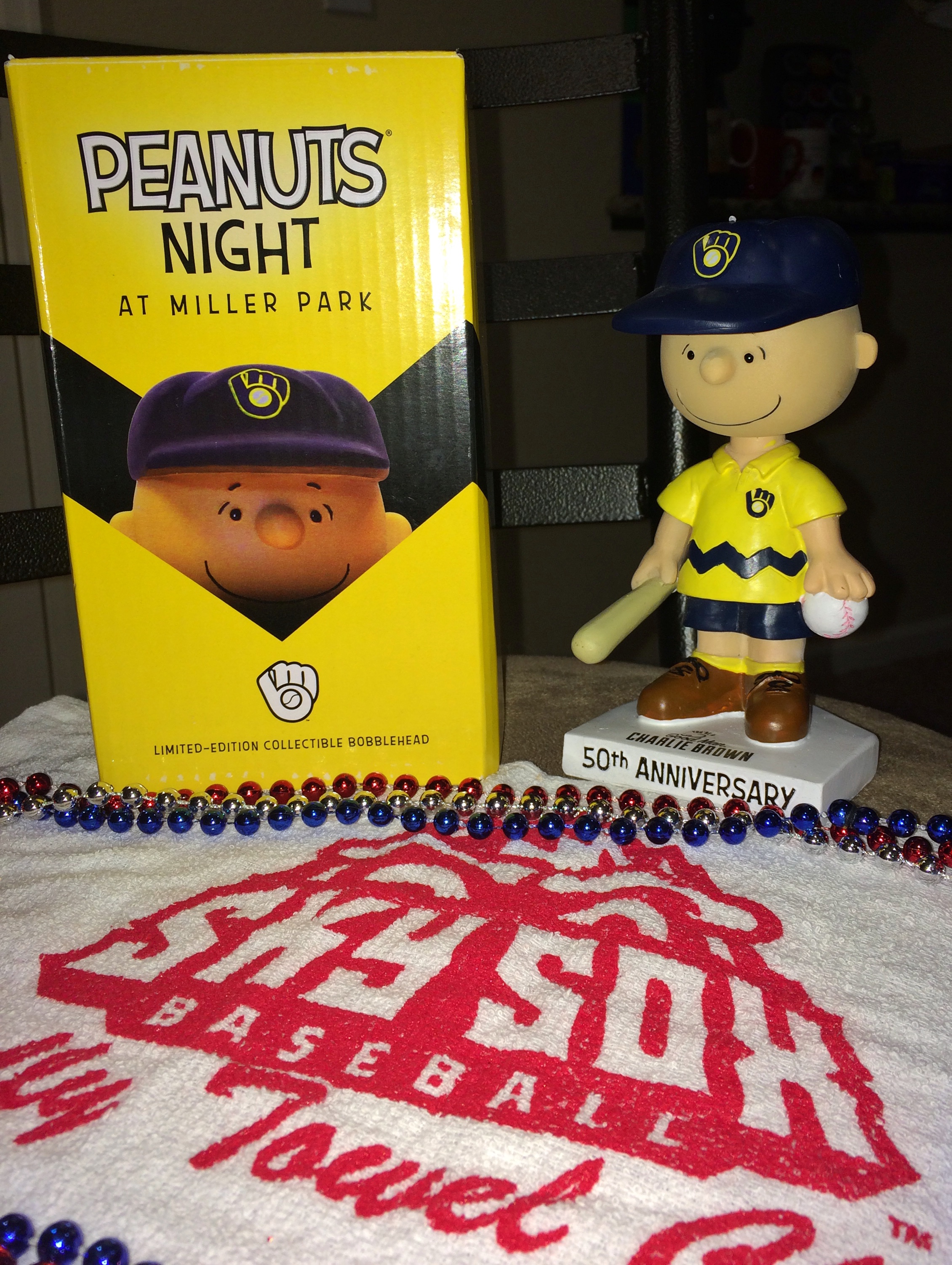 At 7:30 or so, a guy with a mic stepped out behind home plate and told the crowd that more “weather” was on the way. He announced that the Sky Sox were going to do something they’d never done before—shoot off the post-game fireworks pre-game. A seven-year-old boy was brought out on the field. It was his birthday. His mother, who was in the Army in Afghanistan, gave him a greeting on the scoreboard. They told the kid to push down on a plunger that would turn off the lights, and to help him, the Sky Sox catcher walked onto the field. It was pretty obvious this wasn’t a baseball player, based on body shape. The catcher took off the mask to reveal that it was the kid’s mom. This was supposed to be a special moment, but the kid just stood there. His mom had to tell him to come get a hug. The kid was just interested in pushing down the plunger. I kinda felt for the kid. Seven is too young to know how to properly act in a scenario like that. 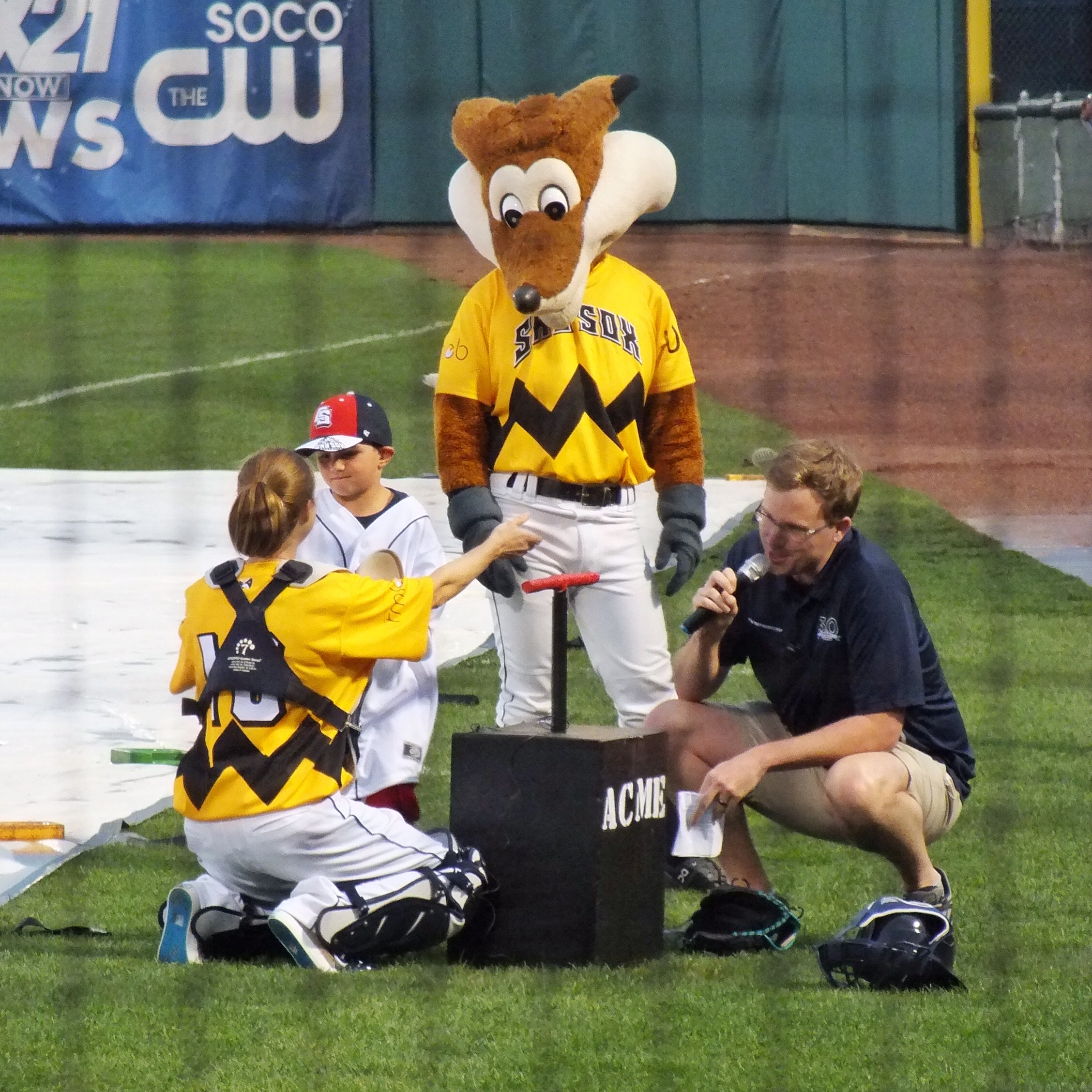 The fireworks were a bust. It was still light out, although the clouds were dark, and it the bursts didn’t stand out. It wasn’t a long show, and the rain increased as it continued. 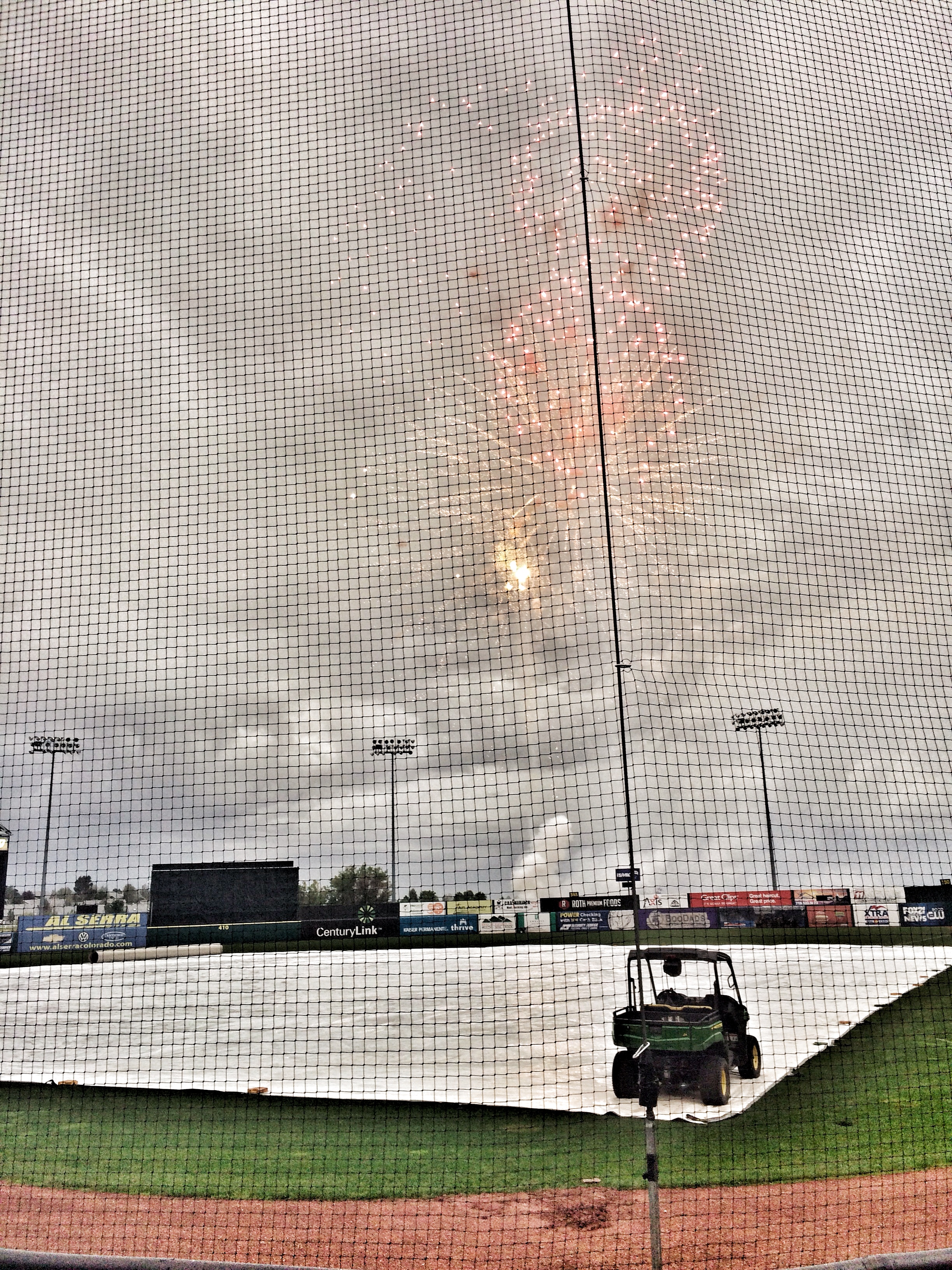 After the show, we walked up the steps and found seats in the back row of the grandstand out of the rain. The guy with the mic told us to keep checking Facebook to see if the game was cancelled. I’m pretty sure this was just a gimmick to get people to like the team’s Facebook page because, when the game was cancelled at 8:30, two hours after we’d arrived, they announced it over the intercom. There weren’t many people left.

We headed home. I looked on the web page and decided to go to Saturday’s double-header. The Iowa Cubs were still in town, and in a couple weeks we’d be moving and life will get busy.

I drove down to the stadium on Saturday morning and exchanged the tickets for ones in the next section over and one row further back from our Friday seats. We spent the afternoon exploring the Air Force Academy. The forecast was for clear weather, but the skies turned black while we were there, and a thunderstorm rumbled through just as we left.

The first game of the double-header was scheduled for 4:00. The closer to the park we got, the more it seemed like an exact repeat of the night before. It was raining lightly when we arrived. I pulled into the park and asked the girl who was taking the $5 if my parking pass for last night’s rain-out would get me in for free. She leaned down, lowered her voice and said, “Usually no, but go ahead.”

The tarp was on the field when we entered the park. There were several cars parked by the gate. Turns out it was used car giveaway night. Local dealers donate cars (ones they can’t sell, I’m sure) to be given out in a drawing. We filled out forms and put them in a barrel. We found a seat out of the rain and sat. After a while, I went up and bought two hot dogs and an order of fries for $20.50. 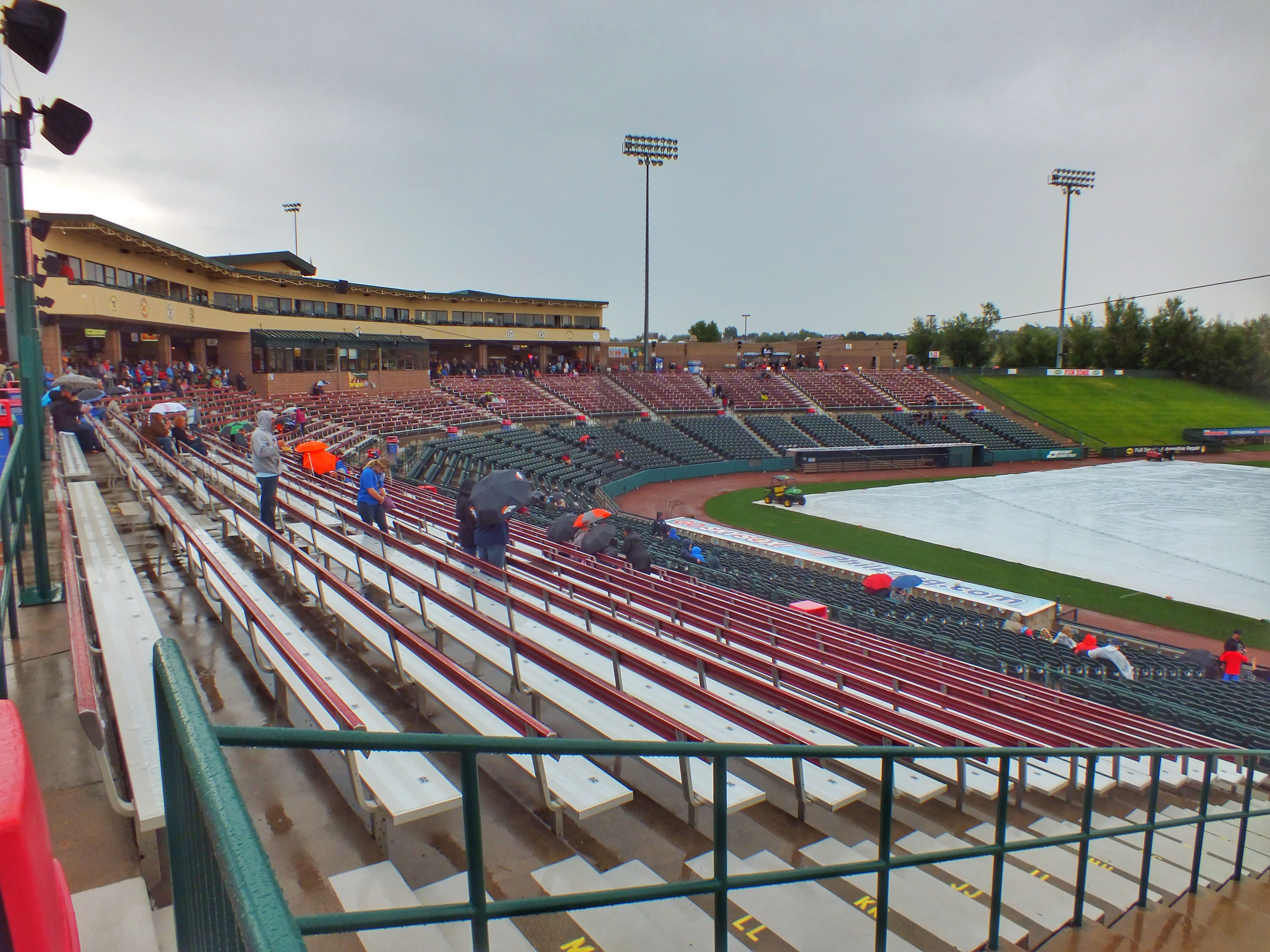 They had something on the menu called “funnel cake fries.” I asked the guy about them, and he asked another guy. Turns out it’s just a funnel cake broken up into bits. I said I’d have regular fries. The guy looked surprised. He asked, “We didn’t sell you on them, huh?” I said, “You didn’t even know what they were. They can’t be too popular a seller.” He laughed.

After we finished eating, the rain stopped. We walked down to our seats. Several rows in front of ours were empty, as were the rows behind us. But everybody in our row was there. We crammed in and stared at the tarp-covered field. The sun came out and it got warm. 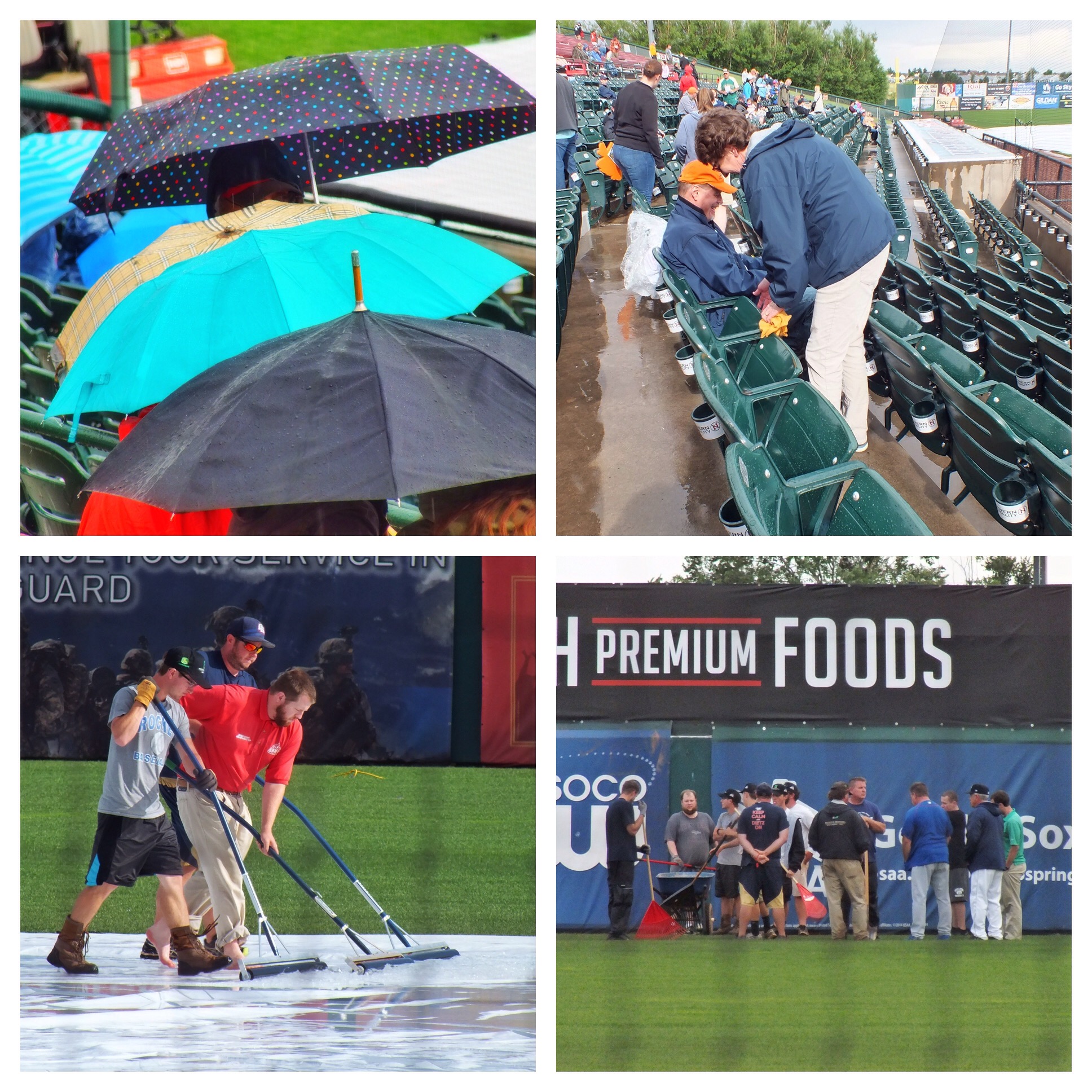 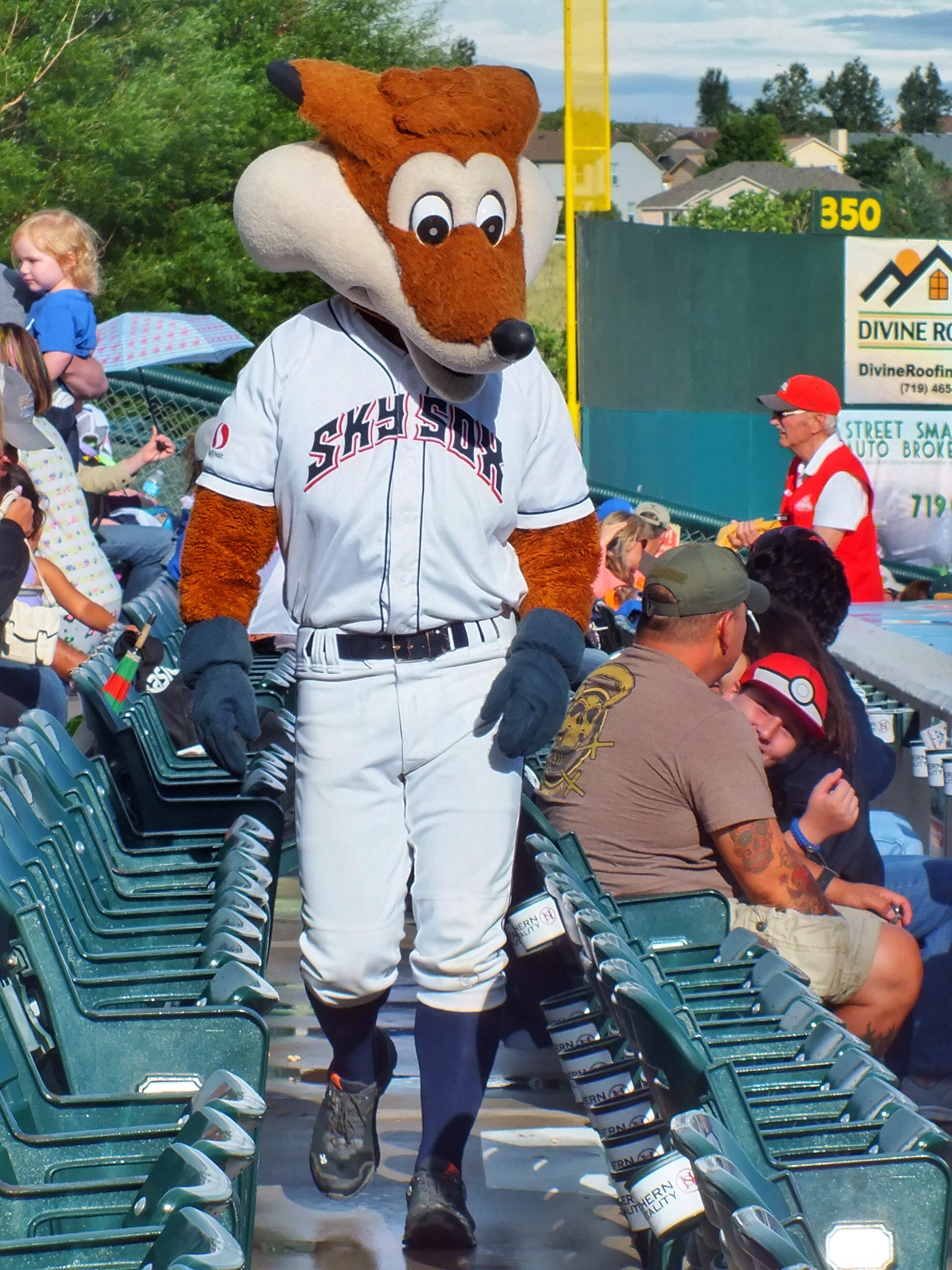 Grounds crew members were wandering about with various implements, but nobody was in a hurry. Most of the energy was centered in center field where guys kept bringing wheelbarrows full of dirt and other guys kept raking things. Finally they removed the tarp. Everyone thought the game was about to begin. 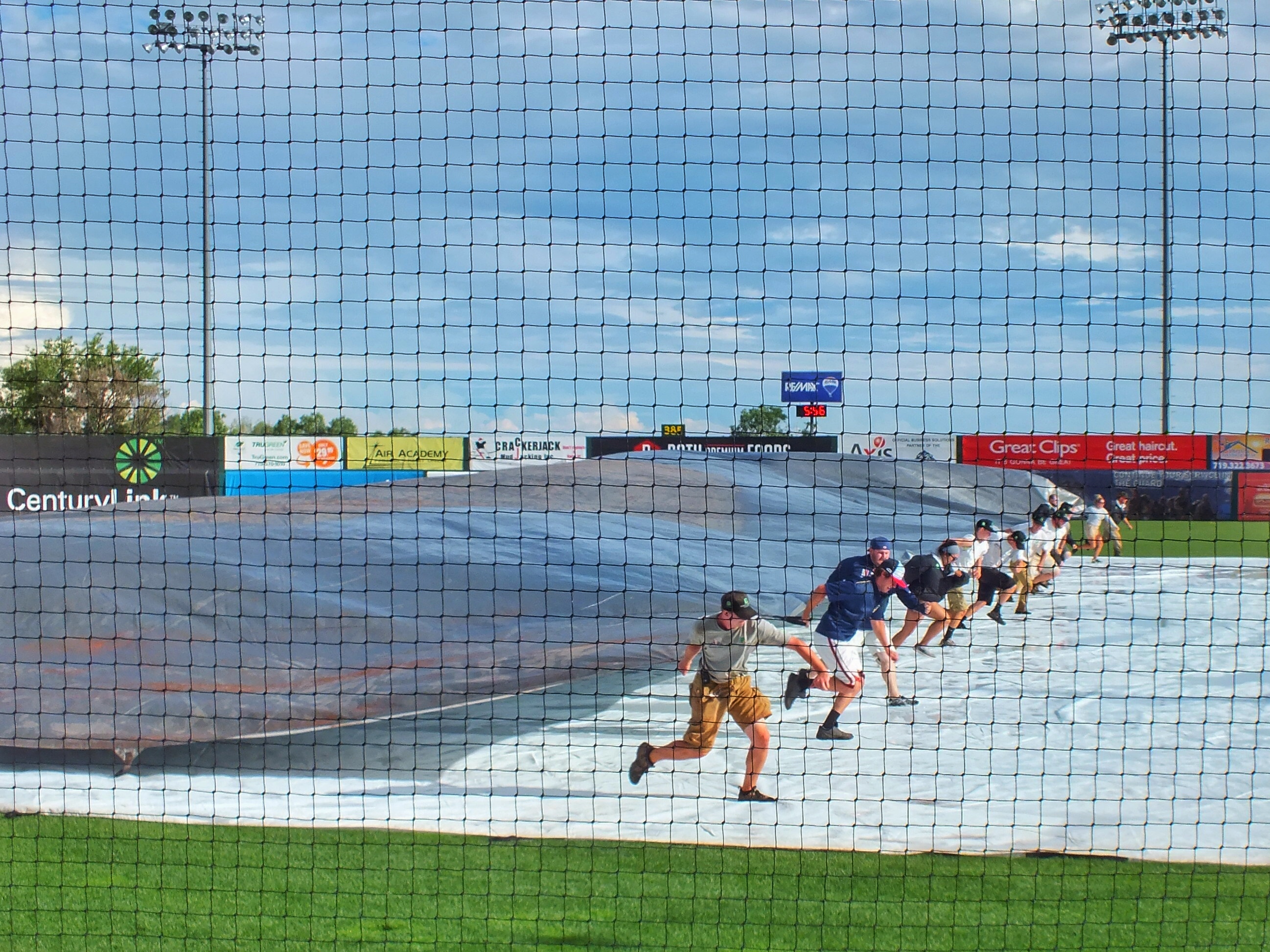 Nope. About a third of the groundskeepers wandered back out to center field and began dumping dirt and raking again. By 6:30, I began getting irritated. And suspicious. Based on the pace of work happening on the field and the total absence of anybody in a baseball uniform, I doubted we were going to see a game. I began to wonder why they were stringing out the used car giveaway. They could have given them all away and let us go home. It’s my guess that they figured out they had a full ballpark and were making a lot of money on concessions. They knew people would stick around to see if they had won a car and, in the meantime, keep buying $9 beers and $8 hot dogs.

This went on and on and on. The cars were no prize. The newest one was 2006. One was a Saturn, which hasn’t even been a company for almost 10 years. The best thing the announcer could find to say about one of them was that it had the scented pine tree on the mirror. I didn’t want a junky car. But I did want to see a baseball game. If we left before they announced a cancellation and the game was played, our tickets would be no good. If they cancelled, we could redeem them for another game, if there ever was one. 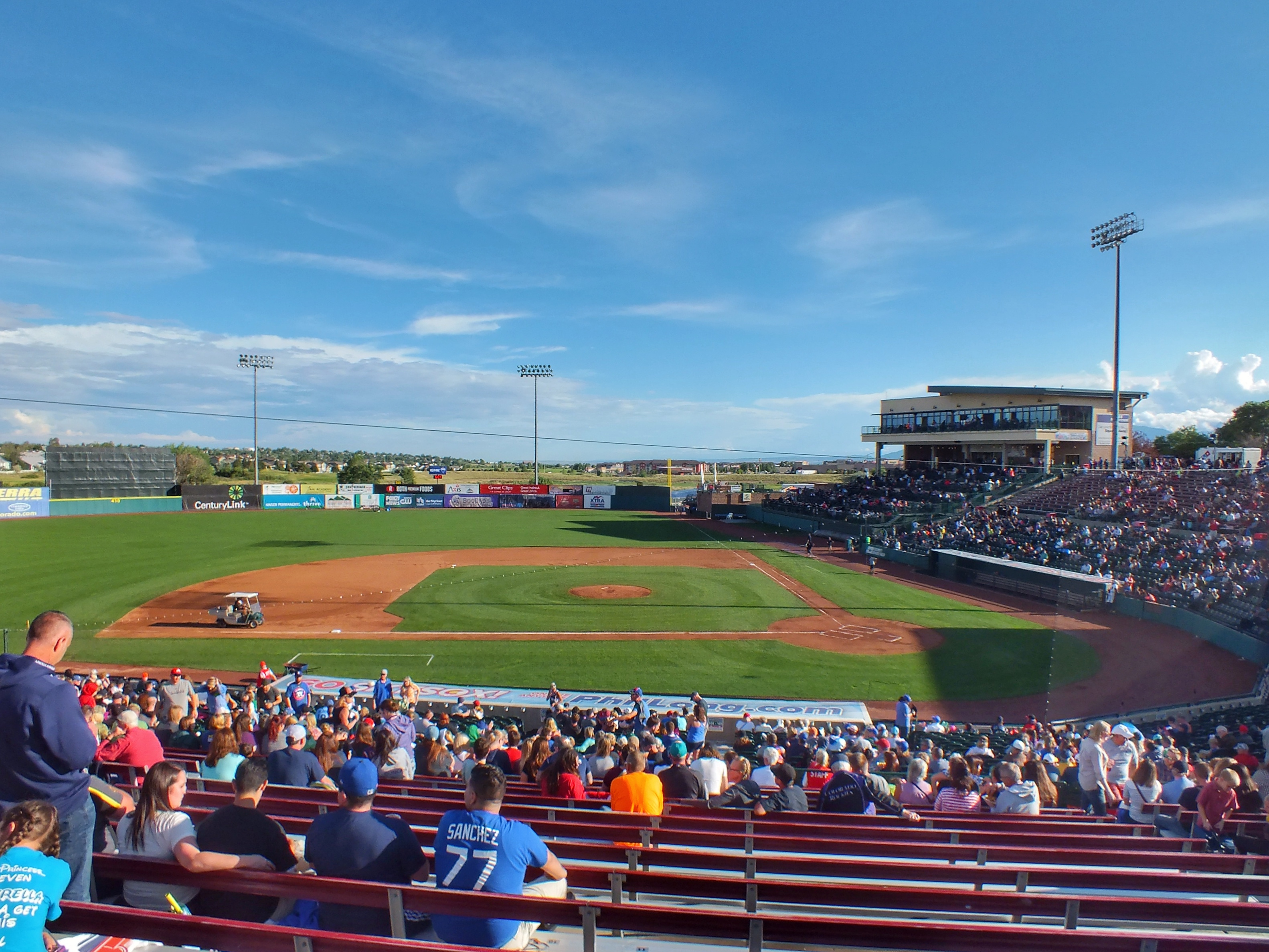 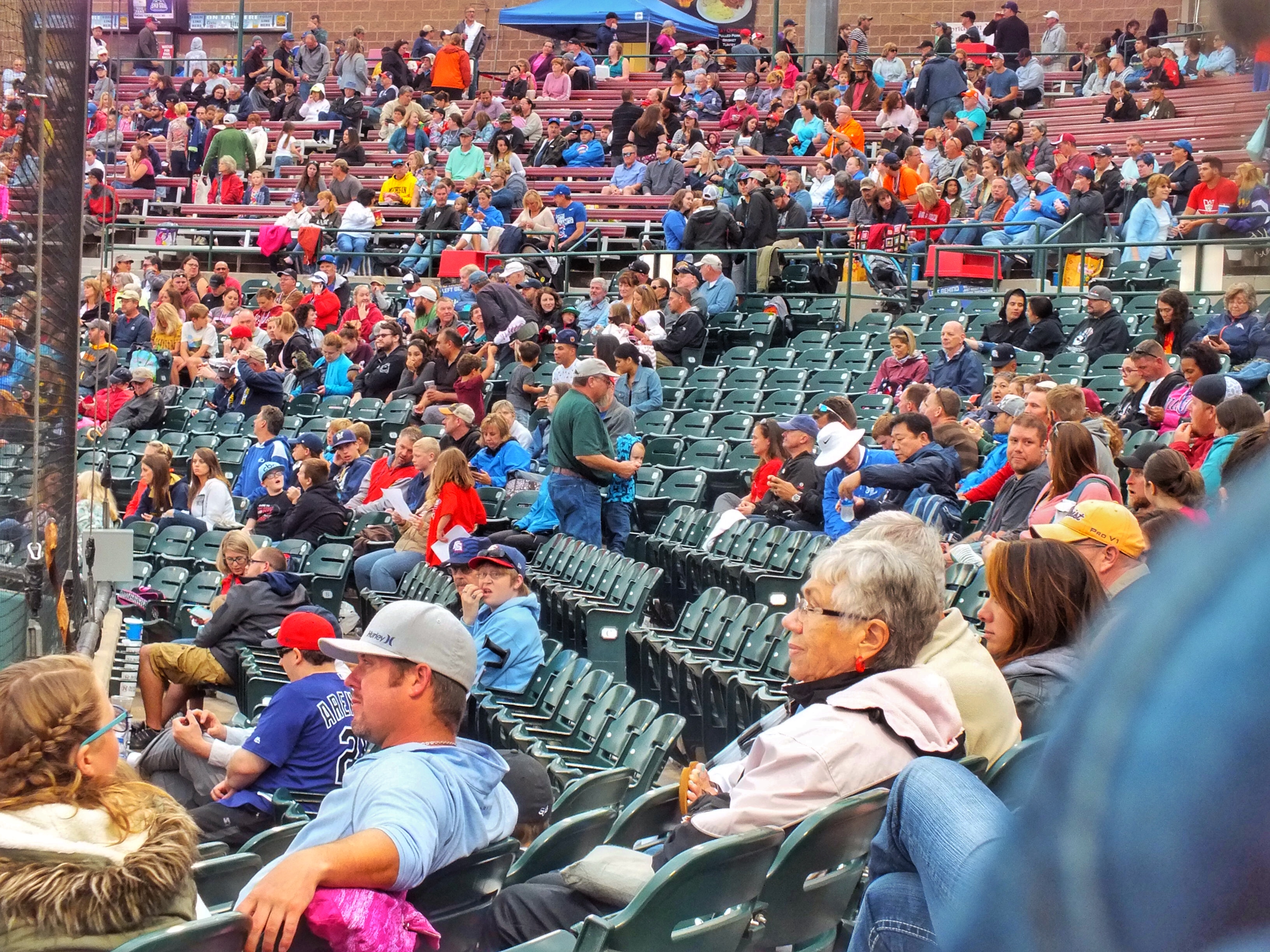 The guy next to me was from Syracuse and had lived in Colorado Springs for 10 years. We talked about what a silly way this was to spend an evening. He finally left around 7:00.

There was no action at all on the field now except a collection of people standing around looking at the ground in center field and walking back and forth. I could see the mangers of both teams out there with the groundskeepers. My conviction that there would be no game kept getting stronger. 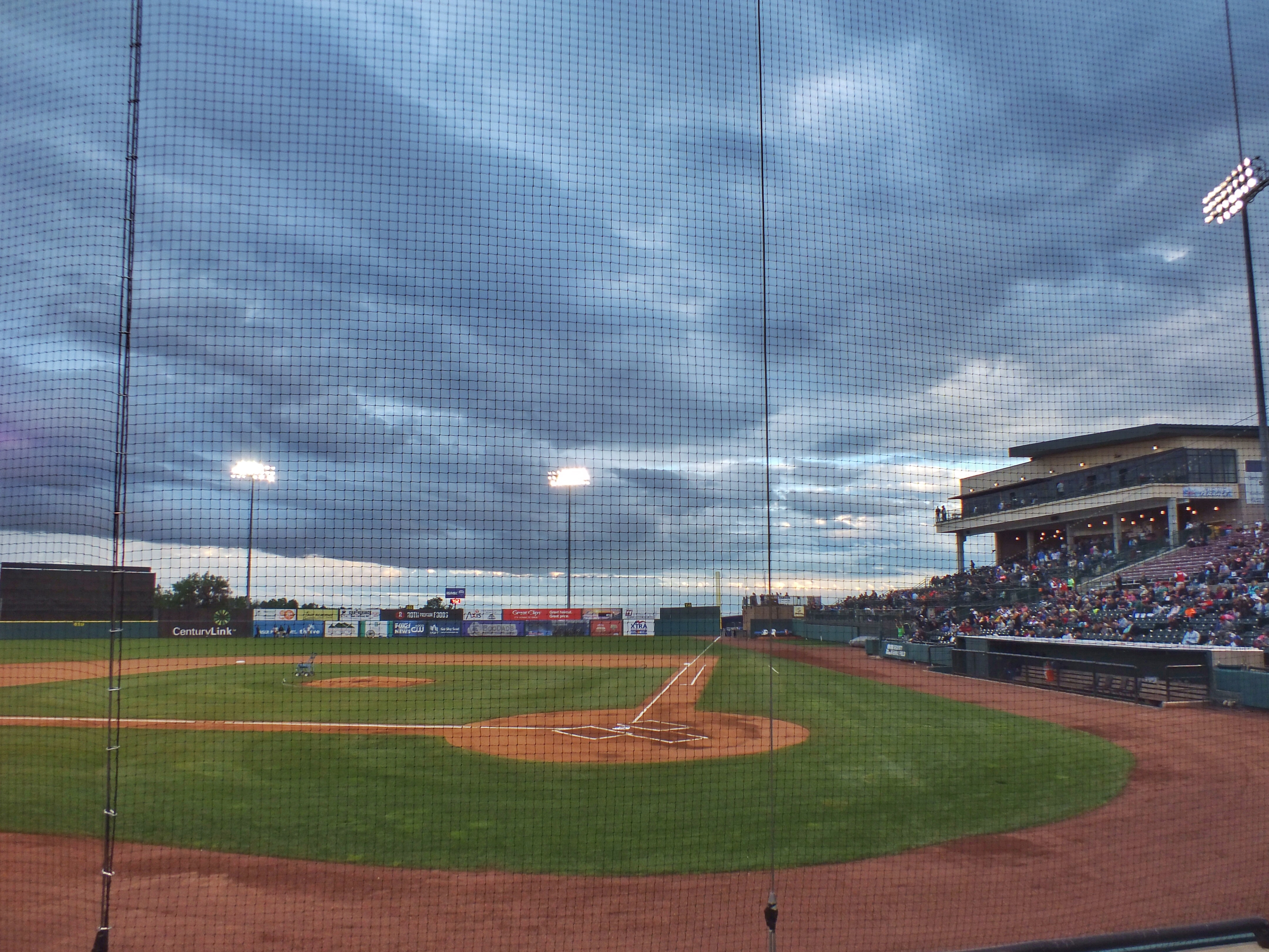 Finally, at 8:10, mic guy announced that there would be no game. There were still two more cars to give away, but even then they didn’t just have the drawing and get it over with—not while there was still money in anyone’s pocket. He said the final drawings would “happen in a little while.” In the meantime, the players from the Cubs and Sky Sox would line up along the stands and sign autographs.

We left. As we walked out, we heard an announcement that our tickets would be good two-for-one for future games, so now I have to figure out how to spend two more evenings in the lovely park. This was the view in the parking lot. 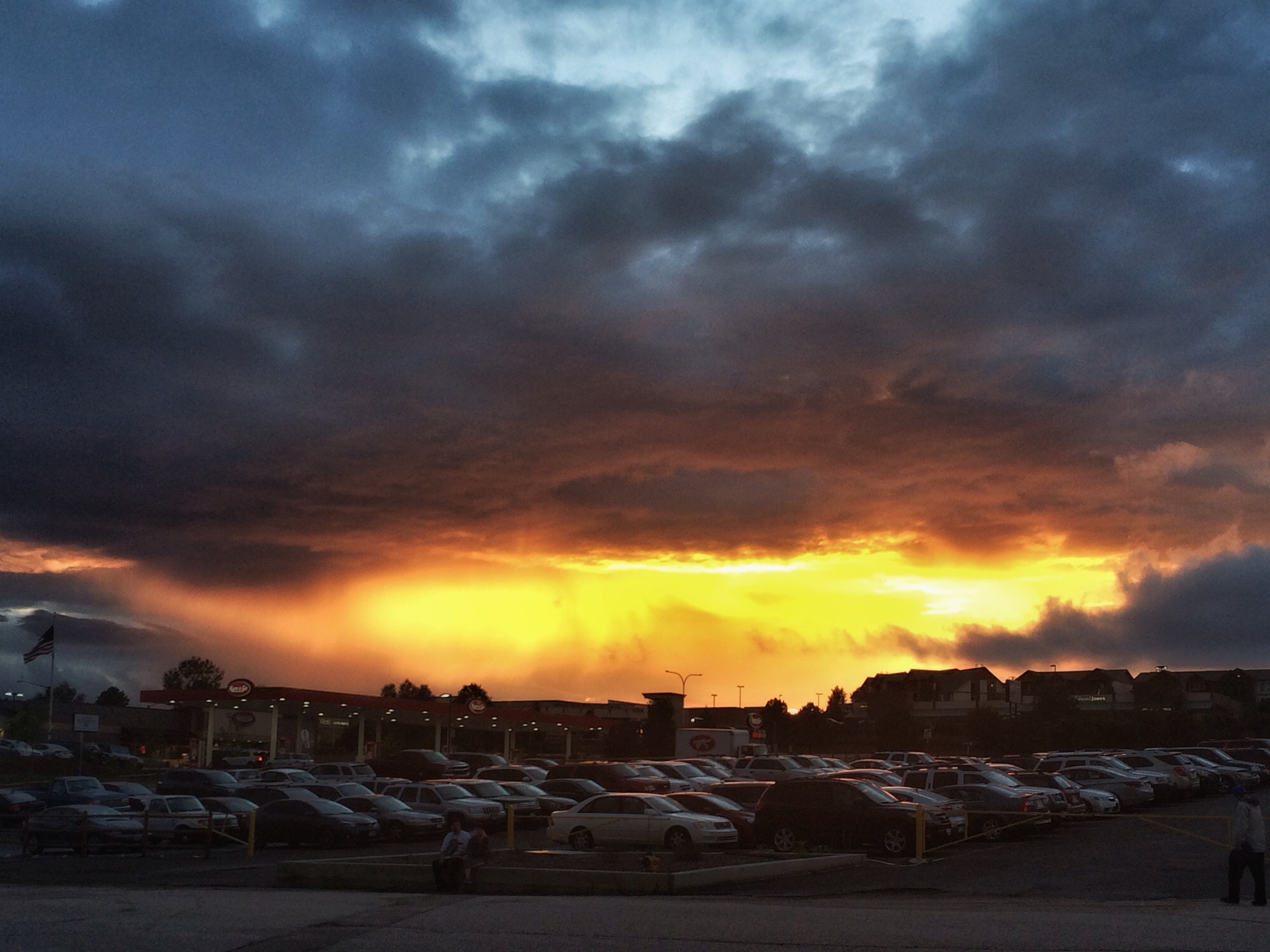 The Sky Sox are moving to San Antonio after the 2018 season. Major League Baseball doesn’t want a Triple-A team in Colorado Springs anymore. The altitude makes it hard to evaluate talent and the weather is too inconsistent. They got that right. Supposedly, a Single-A short-season team is moving to town.

I’ve now spent seven hours in the Sky Sox stadium and have yet to see a single moment of baseball. But I did get a Charlie Brown bobblehead.