We were footloose over Thanksgiving, so we decided to head out of town for two nights. Our destination was The Stanley Hotel in Estes Park. I’d driven through the town before, and seen the hotel up on the hill, but I knew very little about it other than the rumors that it’s haunted. 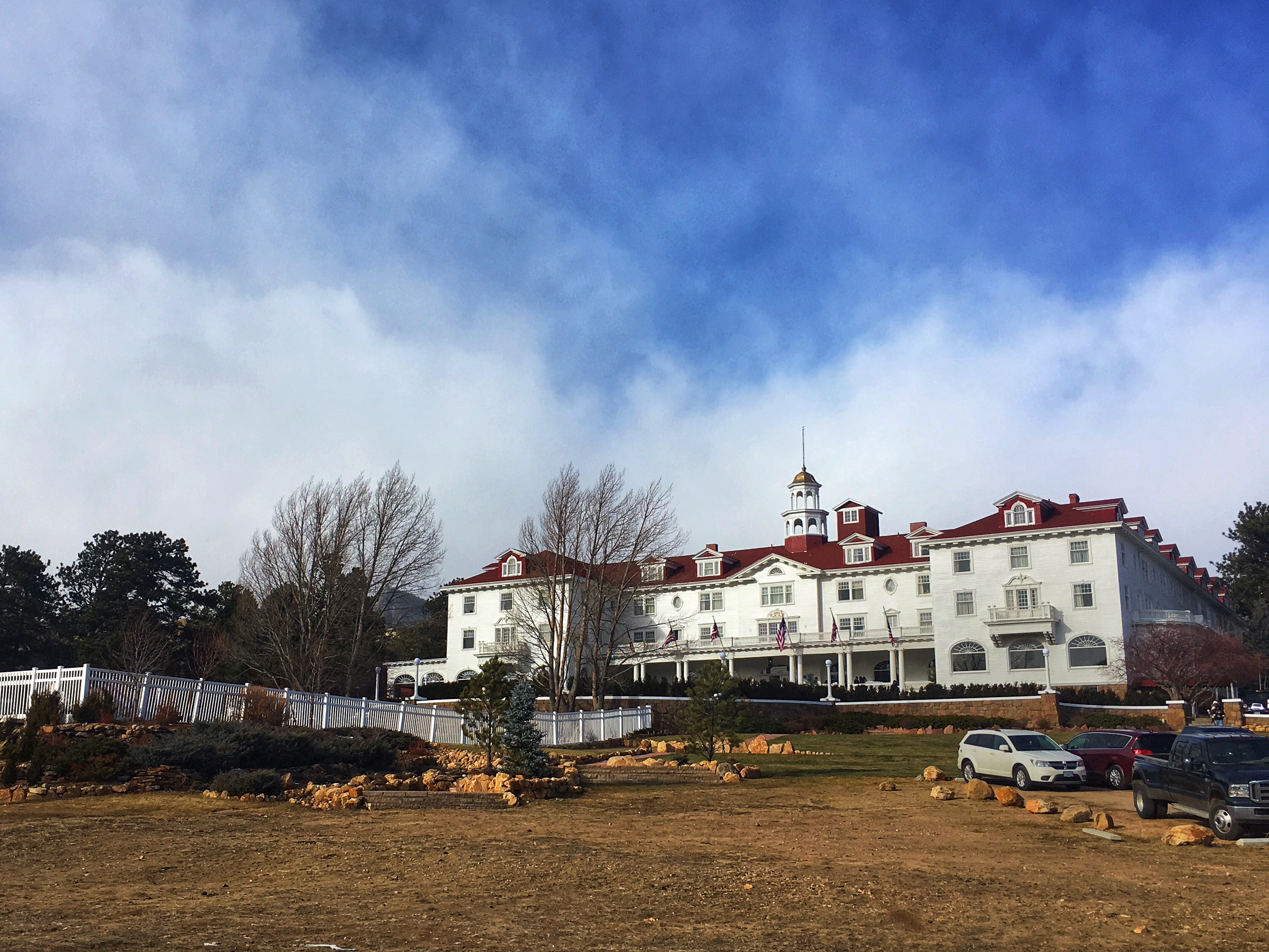 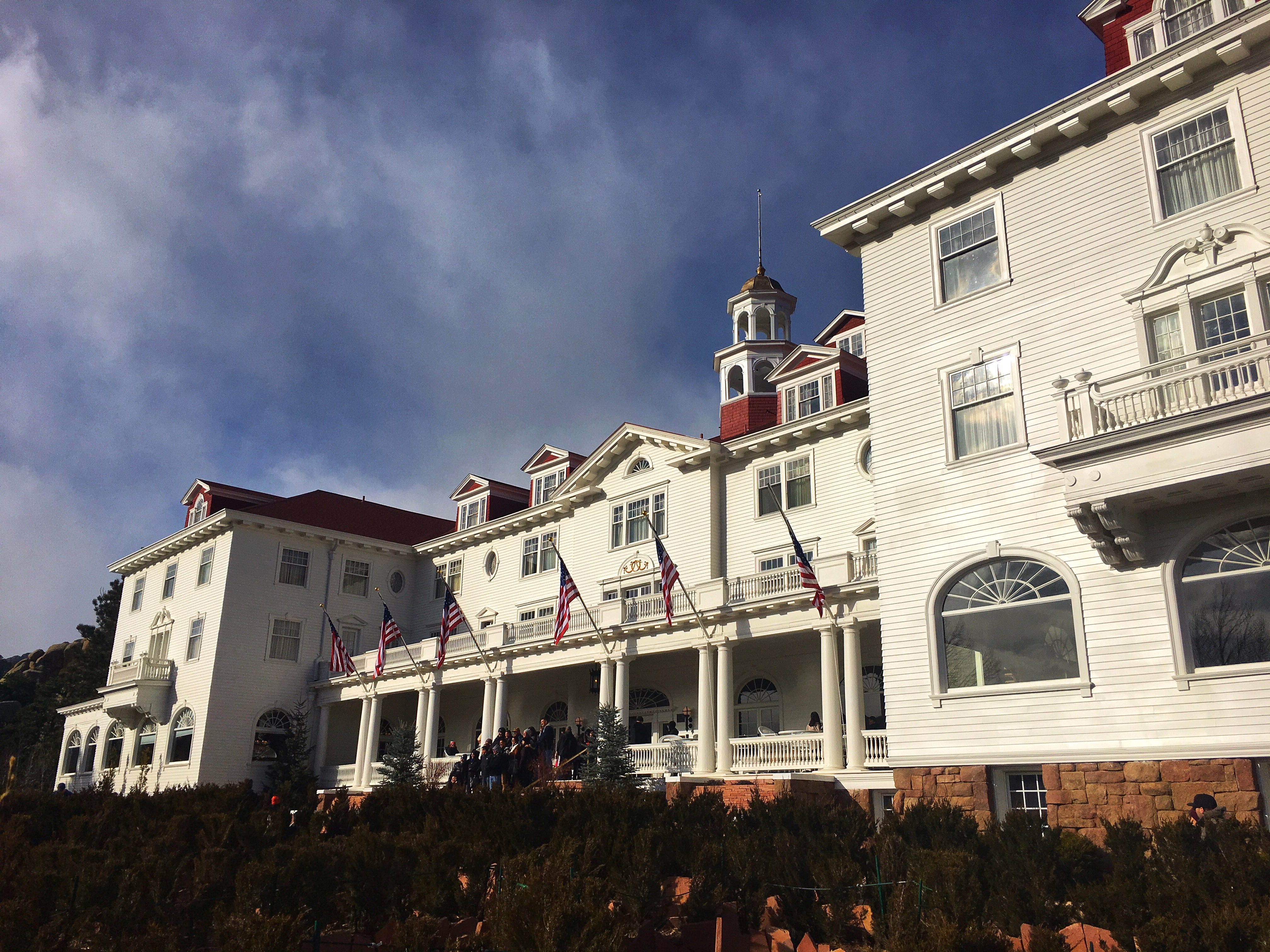 Our room was on the third floor at the far back of the right wing. You can see our window at the end, below the gutter. Notice the man-made waterfall right outside. 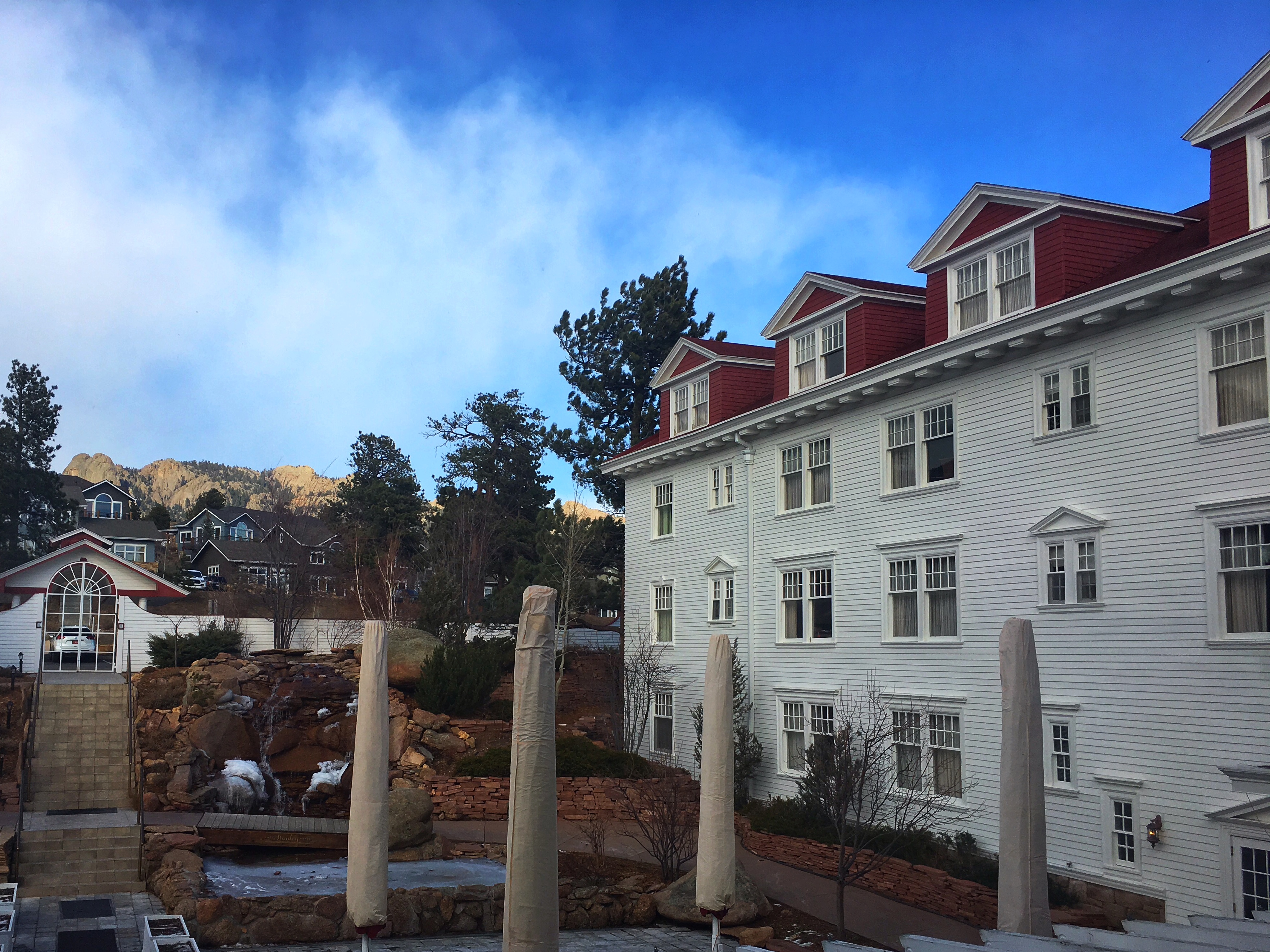 The “haunting” is based, as far as I can tell, entirely on the fact that Stephan King stayed there once and thought up the idea for his book The Shining. The original movie, with Jack Nicolson, wasn’t filmed there, but King himself filmed a six-hour version of the story some years later. The ghosts are supposed to be F.O. Stanley and his wife, who built the hotel and also a maid who lit a lamp that caused an explosion (even though she wasn’t killed and continued working at the hotel until the 1950’s). 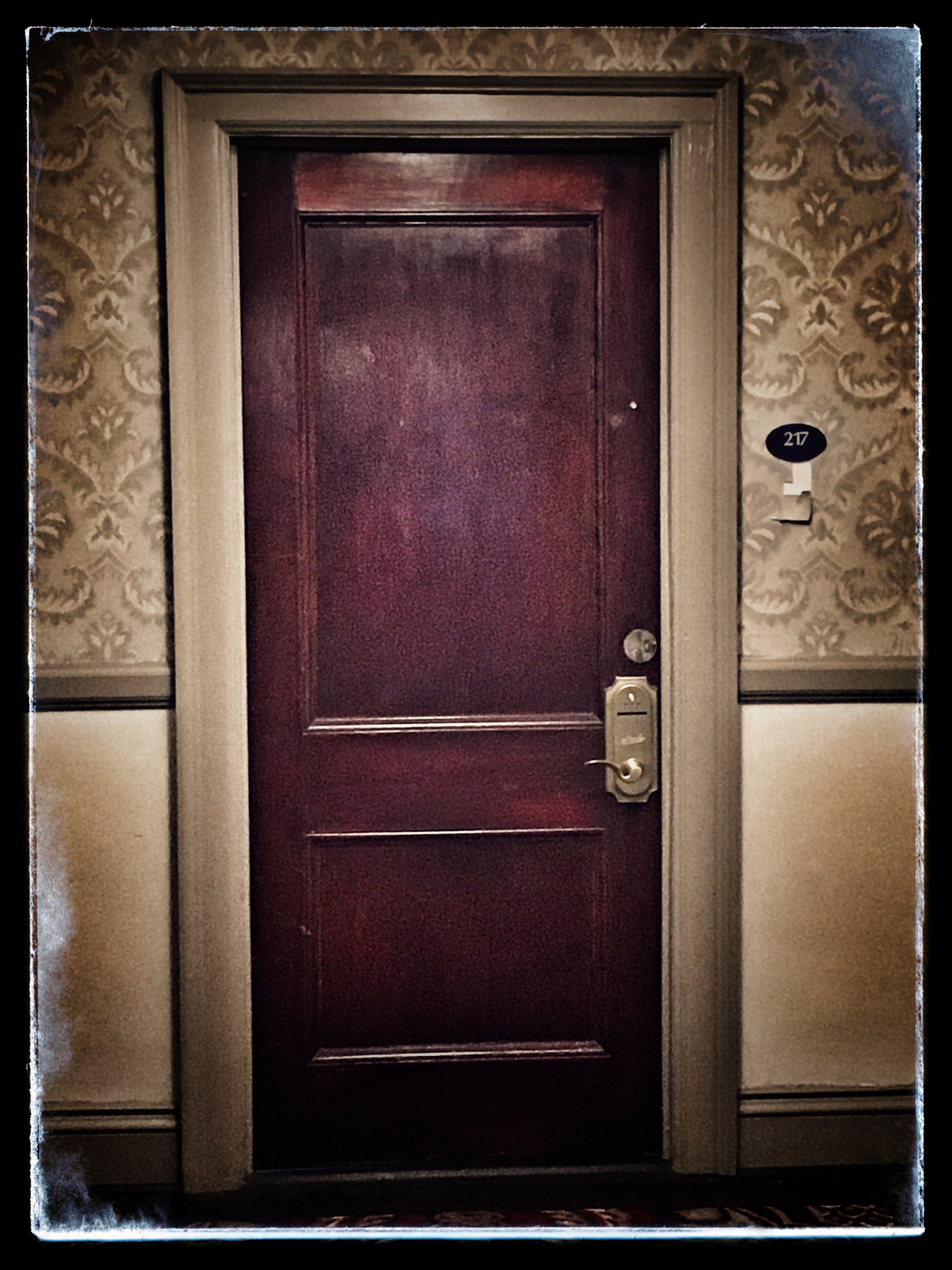 Anyway, I so very don’t believe in ghosts that I slept fine and even wandered the halls after dark. And wander the halls I did. By the time we took the tour on Friday night, I’d been almost everywhere we were taken. But I get ahead of myself.

Our room wasn’t large or luxurious. The bed and pillows were hard, although we both slept well on both nights. The windows were old and warped—on Friday when the wind gusts reached 60 mph, we could almost have flown a kite in the bathroom. The faucet in the tub ran the entire time we were there. And the two chairs in the room weren’t comfortable. The floors creaked—ours a little bit, but the one above us, a lot. That would have all been fine with us—we don’t mind character, and we understand old buildings—if it hadn’t cost us $520 for two nights. That was a bit much.

Especially since, at that time of year, there isn’t much to do except sit in the room. We watched four Hallmark Christmas movies over the two nights. The four plots went like this—and I am not making this up:

In all four movies, there was cookie baking, snowball throwing, Christmas tree decorating and an attempt at a first kiss that was interrupted. I’ve had my fill. (I also managed to catch the tail end of the Bears win over the Lions.)

Thanksgiving dinner was buffet-style. The dining room was packed with tables so they could fit as many people in as possible. Our table for two was tiny and basically stuck in the middle of an aisle so people were squeezing past the entire time. It was also loud. The food was pretty good, if not great, and there was a wide selection. All of that would have been fine except that the $69/person price somehow came to $195 with drinks, tax and mandatory 18% tip which was applied after the tax, for a buffet, for service that involved seating us and bringing us two drinks.

Right around dusk, I went wandering. When I wandered outside, I discovered a herd of elk on the front lawn. They were very used to humans and paid little attention the the many people walking around. I got within a couple feet of one as I walked down the sidewalk. 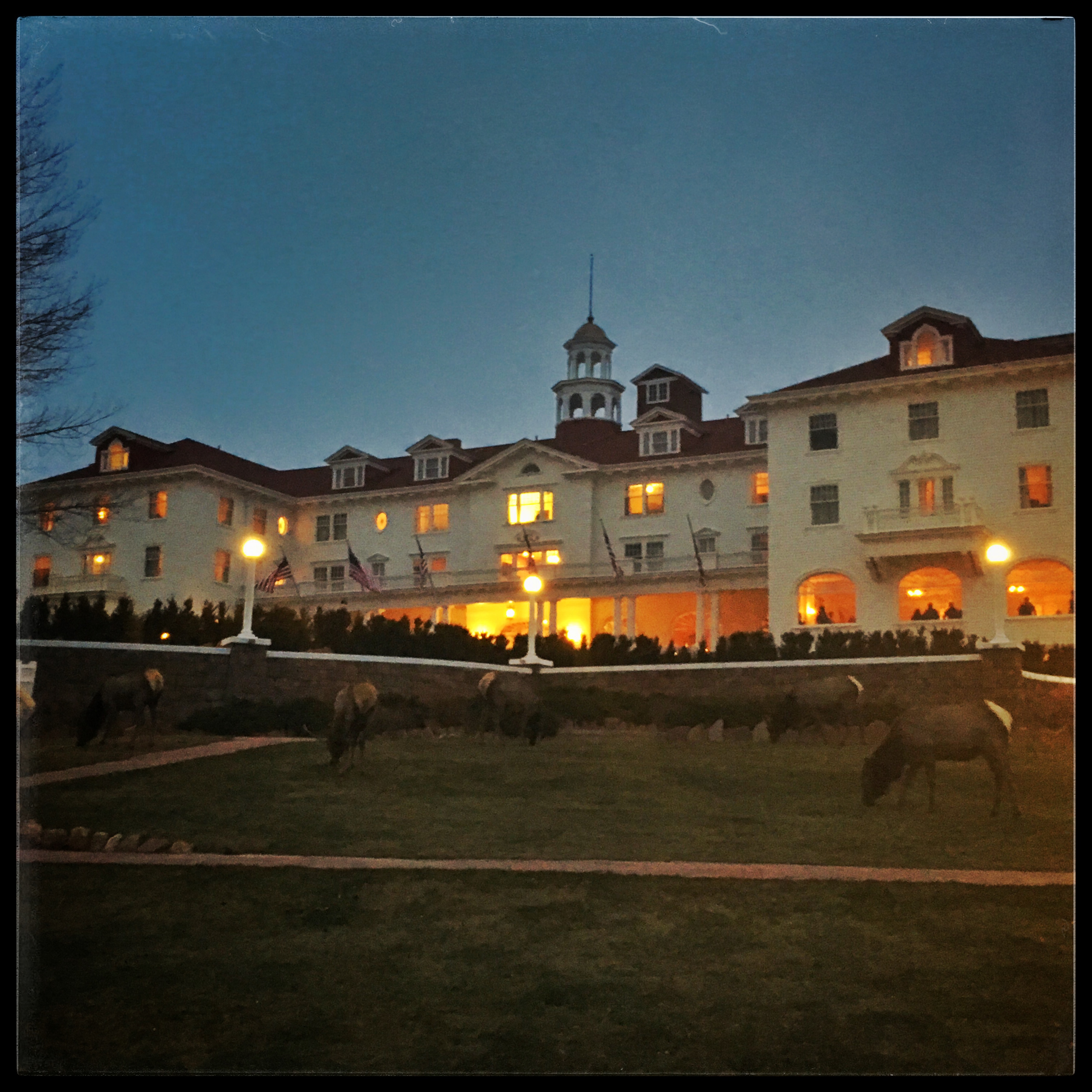 On spent Friday morning wandering through Estes Park and spending too much money. We got back to our room around 2:00 to discover that maid service hadn’t gotten there yet. I found out why when I did some more wandering. The “maids” were a couple of young men who were more interested in goofing off than cleaning. Many of the rooms were open and half-cleaned. I even ducked into one to take a photo facing out the front of the hotel.

At 4:00 we went downstairs for a tour—that costs us $20 a piece. The guy who gave it had an odd way of talking that included a lot of rhetorical questions (or at least nobody bothered answering him), and a habit of saying “Alright then.” He spent the final several minutes of the tour all but demanding tips. We honestly had no cash on us, so we grabbed an opportunity to ditch.

The guide took us outside and down to the ballroom, where Harry Houdini and other famous people have performed. He then stood us in the 40 mph winds to tell us about the outside of the hotel. We went inside to see the billiard room (which the guide pronounced “billard”) the now-empty dining room where we’d had lunch, and the hall way outside room 217 (where Stephen King stayed). We couldn’t go inside the room because its rented out for an increased fee. We were told the waiting line is three years long. We ended up in a tunnel in the basement, built so the servants could move about unobserved. It was here, trapped in the narrow space, that the guide hit us up for money.

We left early on Saturday morning. We’d had fun, and we’re glad we went. But we won’t be returning—not at those prices for that service. When we stayed at the Broadmoor earlier in the year, we spent a ridiculous amount of money, but felt like we were getting a exemplary service and a new experience. The Stanley, on the other hand, wasn’t that different from several other old hotels we stayed at except that it was twice as expensive.

Here’s a video of our stay.