It’s been a long time since we just took off for an extended vacation. When we decided to do it this year, she couldn’t get off work until the last week of October. That was later in the season than we wanted to go, but it helped us decide to head for Utah and not Wyoming.

It all worked out. We thought we’d be traveling in early winter, but once we got west of the Rockies, we found ourselves in the peak of fall color season. (More on that in future posts.)

We left home at 9:00 a.m.—our goal on this trip was to see a lot but not be rushed. I took I-70 all the way across Colorado. We’d never been on it between Frisco and Glenwood Springs, so this was our first trip past Vail and through Glenwood Canyon.

Our only sightseeing along the way was a on a brief stop in Fruita to see the statue of Mike, the headless chicken. 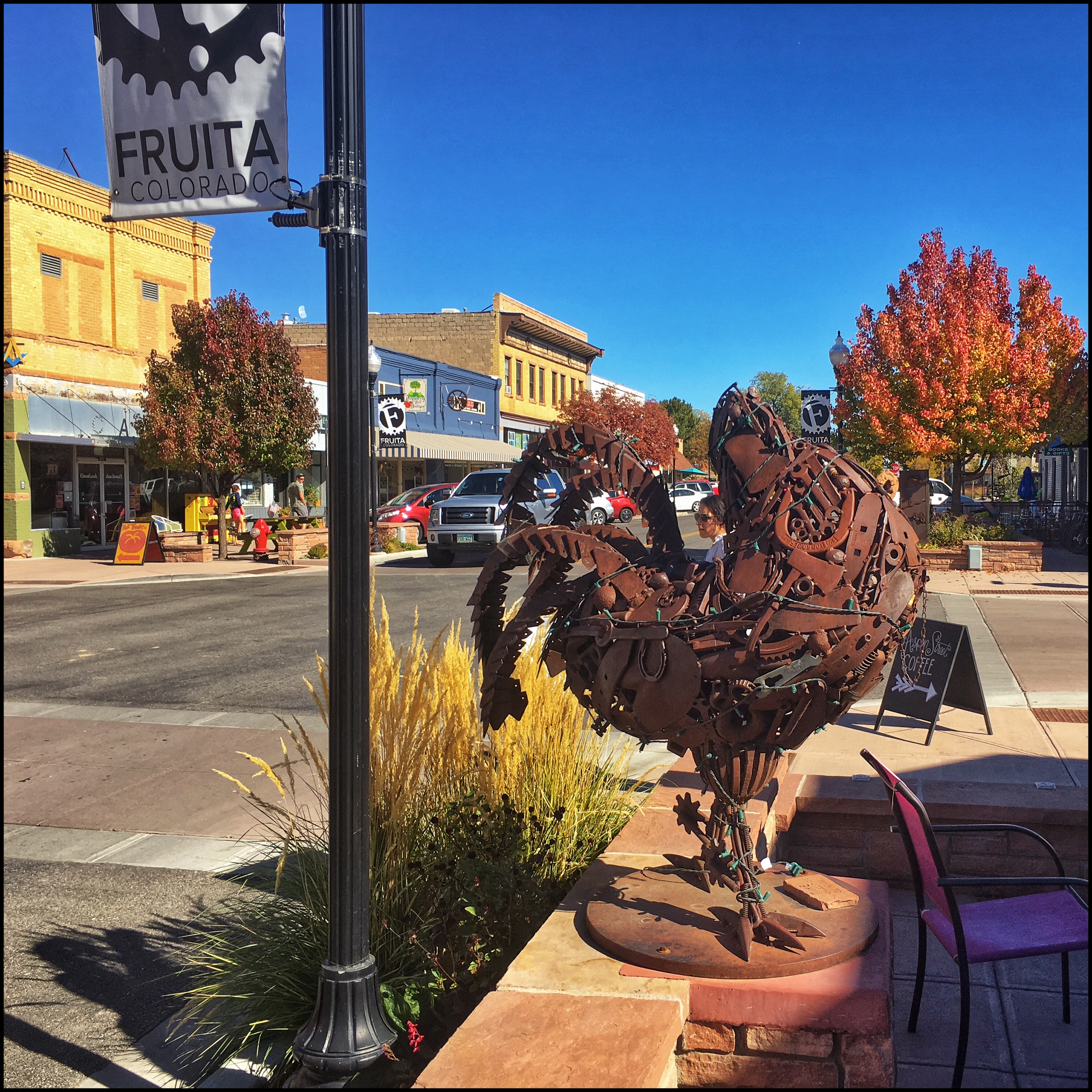 In 1945, a local farmer named Lloyd Olsen cut the head off a rooster. The bird ran around like, well … a chicken with its head cut off. But it didn’t stop running. Apparently, enough of the brain was still attached to the spine to keep it functioning after a fashion. “Mike” could walk around and stand on a perch, and even attempted to preen, pick at the ground, and crow. The farmer fed it with an eyedropper and small bits of corn.

Lloyd took the chicken on the road to fairs and sideshows. Mike even appeared in Time and Life magazines.  At the height of his fame, he was bringing in what would be $50,000/month today. It all came to an end when the rooster chocked on a piece of grain.

We left Fruita and soon entered a very bleak section of Utah. My wife said the landscape looked like an elephant had melted, which I thought was quite descriptive.

I’d reserved a room in the River Terrace Hotel in Green River, the only community with any claim to the description “town” in that part of the state. Green River isn’t a fancy place, and in other parts of the world, our hotel wouldn’t be considered a fancy hotel. But in that town, it was as good as it gets. Our room overlooked the river. It was clean, and the chairs were comfortable. The bed, as we learned later, was not.

My wife settled in to relax and enjoy the view. I walked across the street to  the John Wesley Powell River History Museum. I’d read, and enjoyed, Powell’s account of boating through the Grand Canyon, and there certainly wasn’t anything else to do in town. 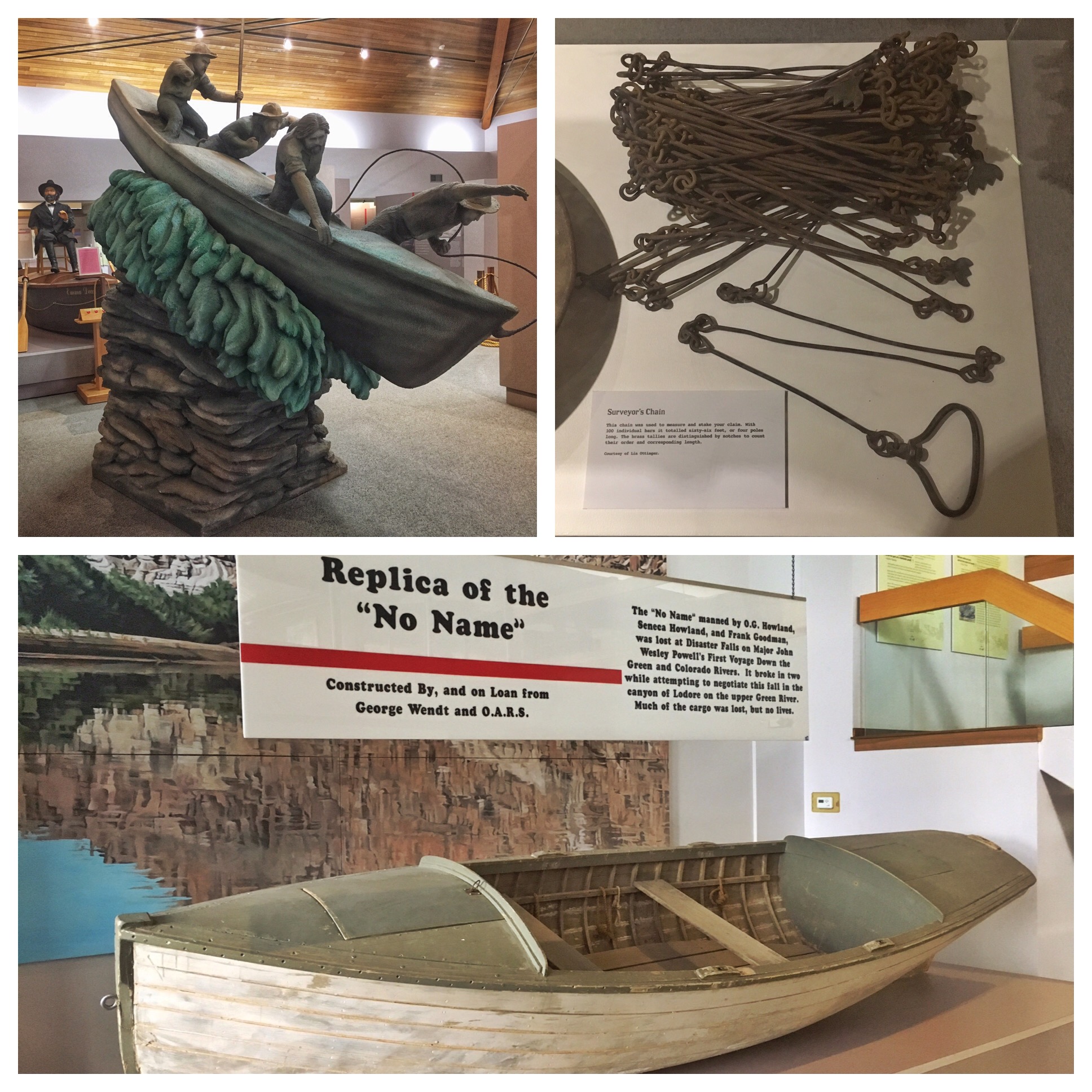 It cost me $6 to get in, and I spent maybe a half hour. It was well done, but only about half of it had to do with Powell’s voyages. The remainder was a hall of fame of guides and others who had something to do with the river. That part was of little interest.

The location of the town is the only spot where the river can be easily crossed. It was the location of a ford, a ferry, and now, a bridge. 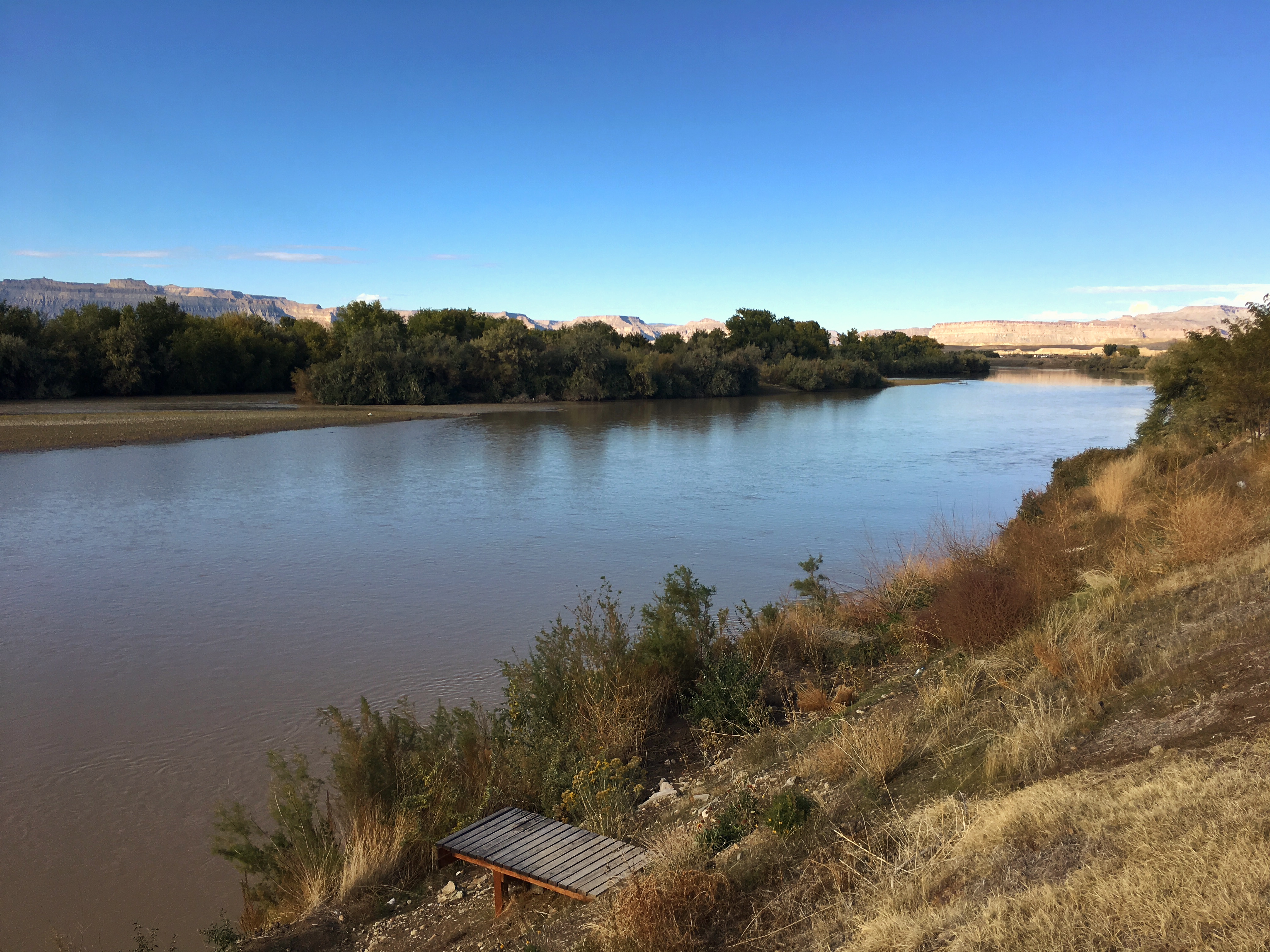 It was still fairly early in the evening. I saw that there was a state park just downstream from our hotel, so I grabbed my binoculars to do my first Utah birding. The park turned out to be a tiny slice of river taken up entirely by a golf course and a camp ground. I didn’t bother.

So it was back to the hotel, having exhausted the recreational activities of the town. We debated where to go for supper. There weren’t many options, and we quickly  narrowed these down to two—a taco truck and the Tamarisk Restaurant. We decided on the truck and arrived to discover it was closed—even though the web site and the sign said it would be open until 10:00 p.m. So it was the Tamarisk, which was associated with our hotel and located next door.

It was an odd place, with a fancy 1960’s vibe inside but with large photo murals of the local landscape on the walls. The booths along the large picture window overlooking the river were all taken, so the hostess sat us at a table for 10 in the middle of the room. For reasons I can’t recall, I ordered beef fajitas. They were edible, but nothing to sing about. The server was friendly, the kid from the booth behind me dropped his napkin in my lap, and the price was high.

We retired to an evening of reading in our room and a night of restlessness on the hard and lumpy slab that served as our mattress. For $160, it wasn’t a place of dreams.

This entry was posted in Museums, Road Trips, Sculptures and Statues. Bookmark the permalink.