At some point on Saturday evening, My wife asked me if we were just driving again on Sunday. That had actually been my plan. We had reservations at a hotel in St. George, Utah, and I figured we’d head that way with maybe a brief stop at Cedar Breaks National Monument.

But when she asked that question, I began to ponder. I had plenty of time to kill in the hotel room, so I looked at our options. I found another route, a much less direct one, that would take us right through Capitol Reef National Park, along the edge of Grand Staircase-Escalante National Monument, through a bit of Bryce Canyon National Park, and even still allow us to see Cedar Breaks National Monument.

We left shortly after dawn and were soon on a two-lane blacktop through the middle of nowhere. We reached Capitol Reef around 9:30, with very little idea of what there was to see there. Before we’d even gotten to the main part of the park, we saw a sign for the Hickman Bridge trailhead and decided to begin adventuring.

The cottonwoods along the Fremont river were at peak fall splendor, and the back-lighting from the sun made the colors electric. 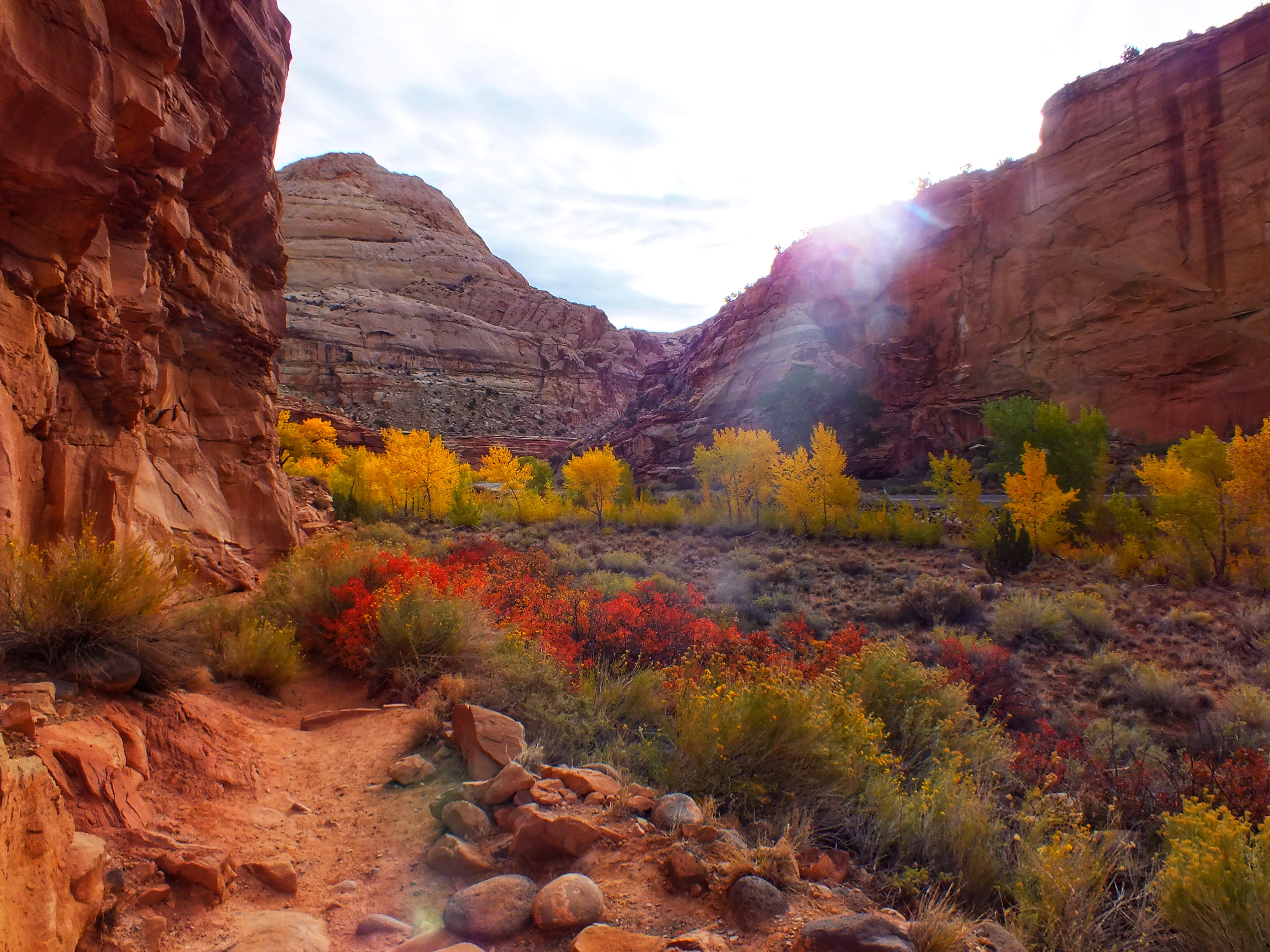 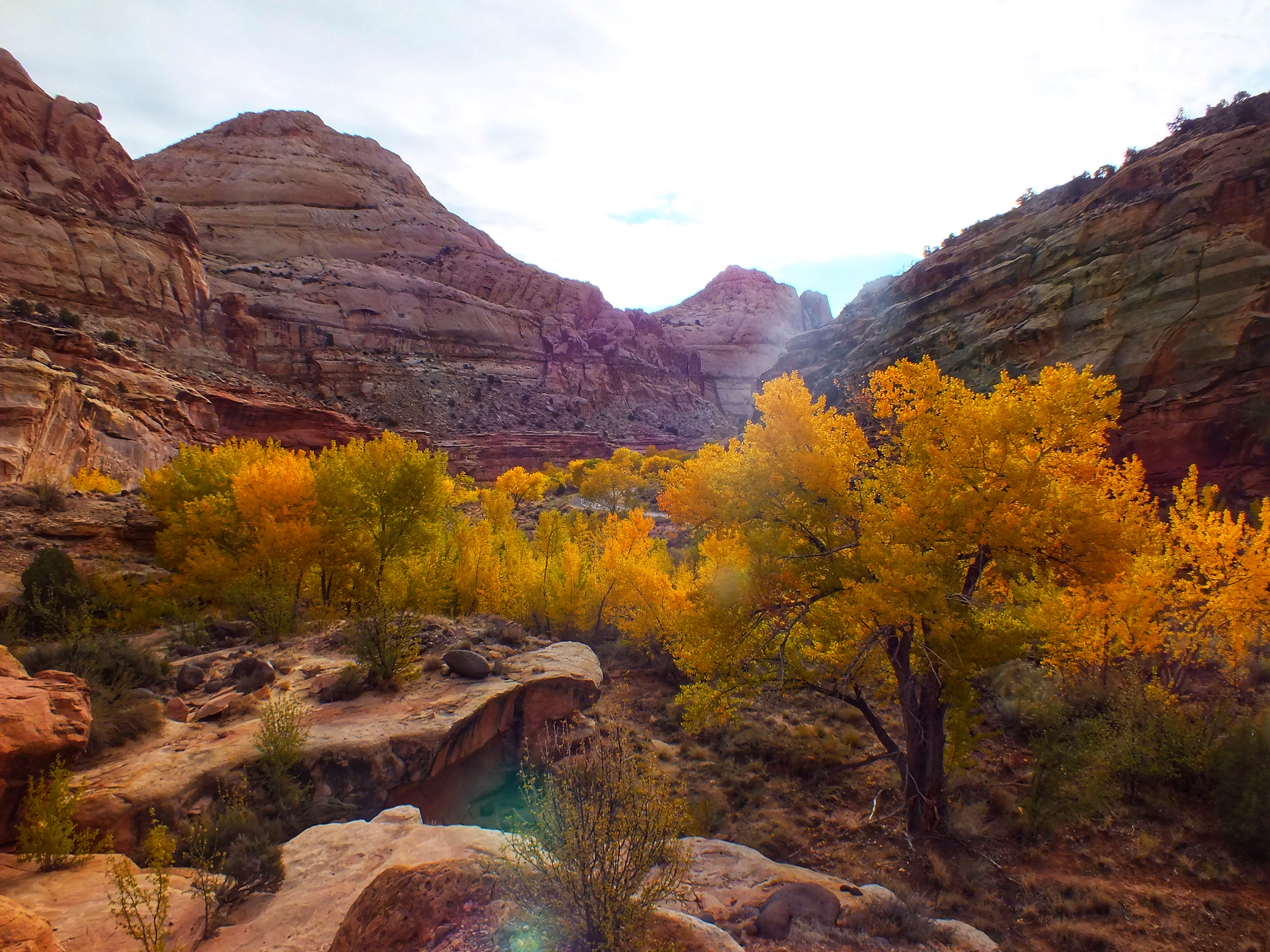 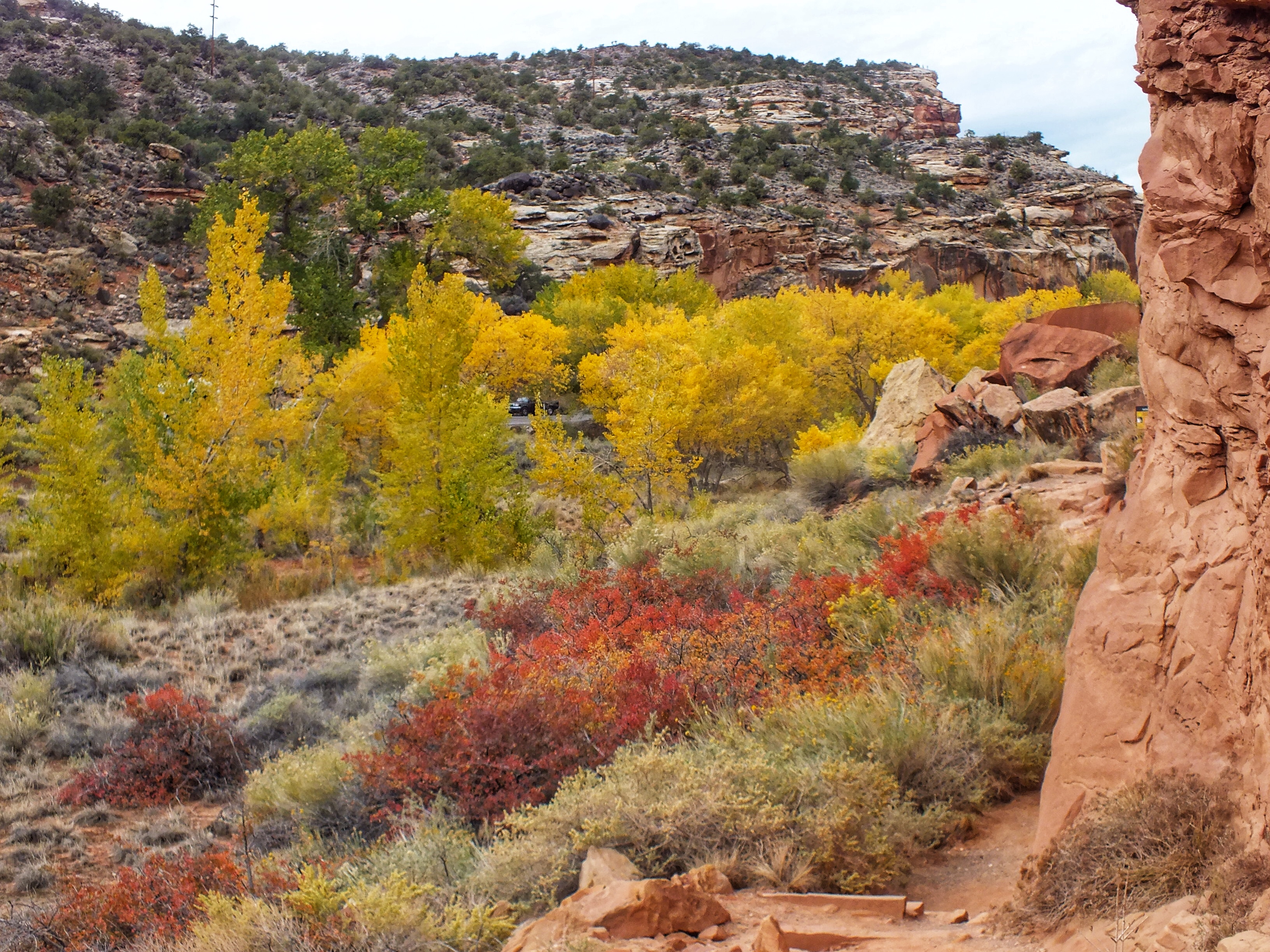 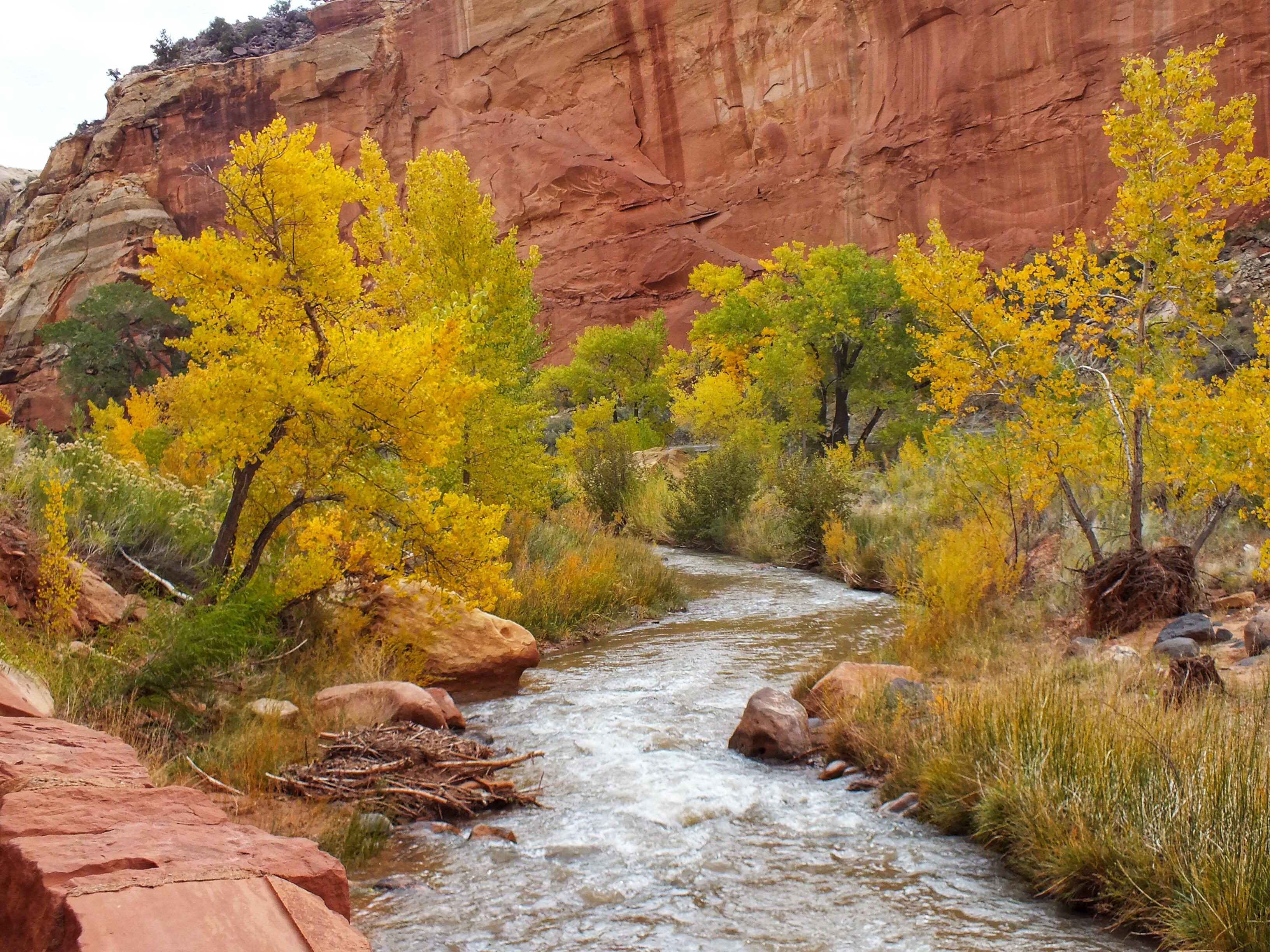 The trail climbed up a bluff, dipped down into a wash, and twisted around cliffs. 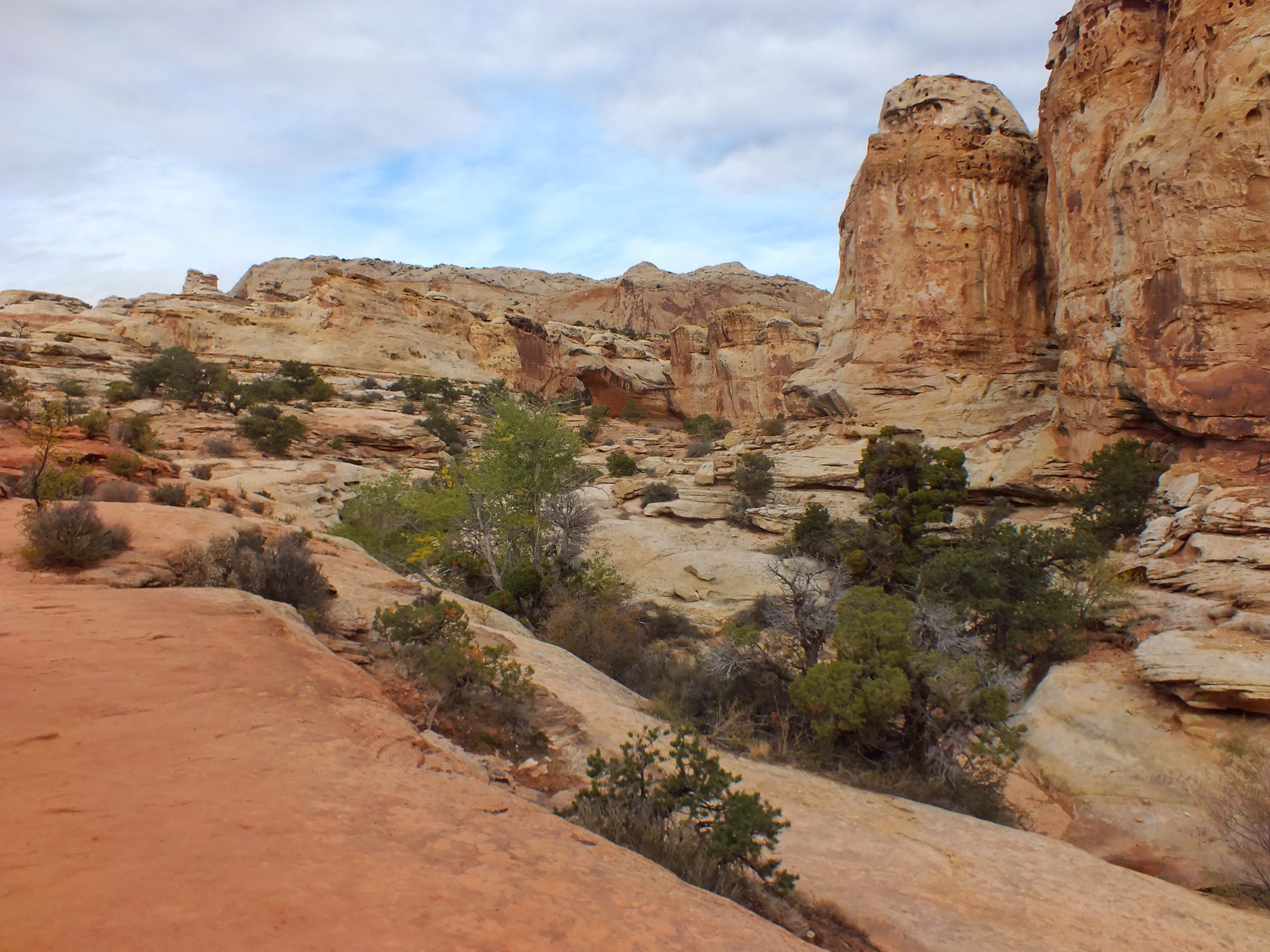 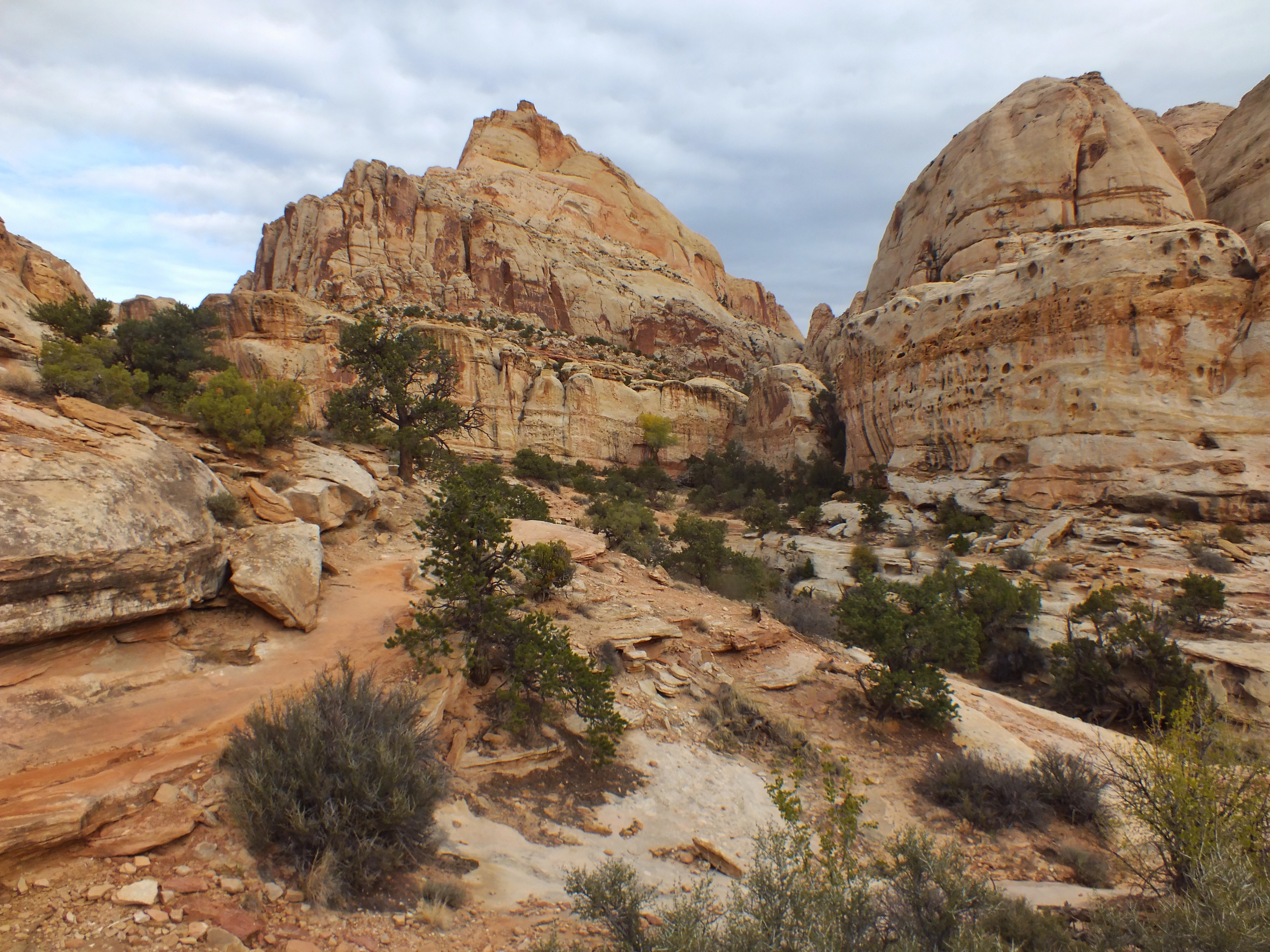 There were other people on the trail, but not many. It wasn’t difficult to get photos without them. The bridge was impressive. We saw several others during the week, but this remained one of my favorites. 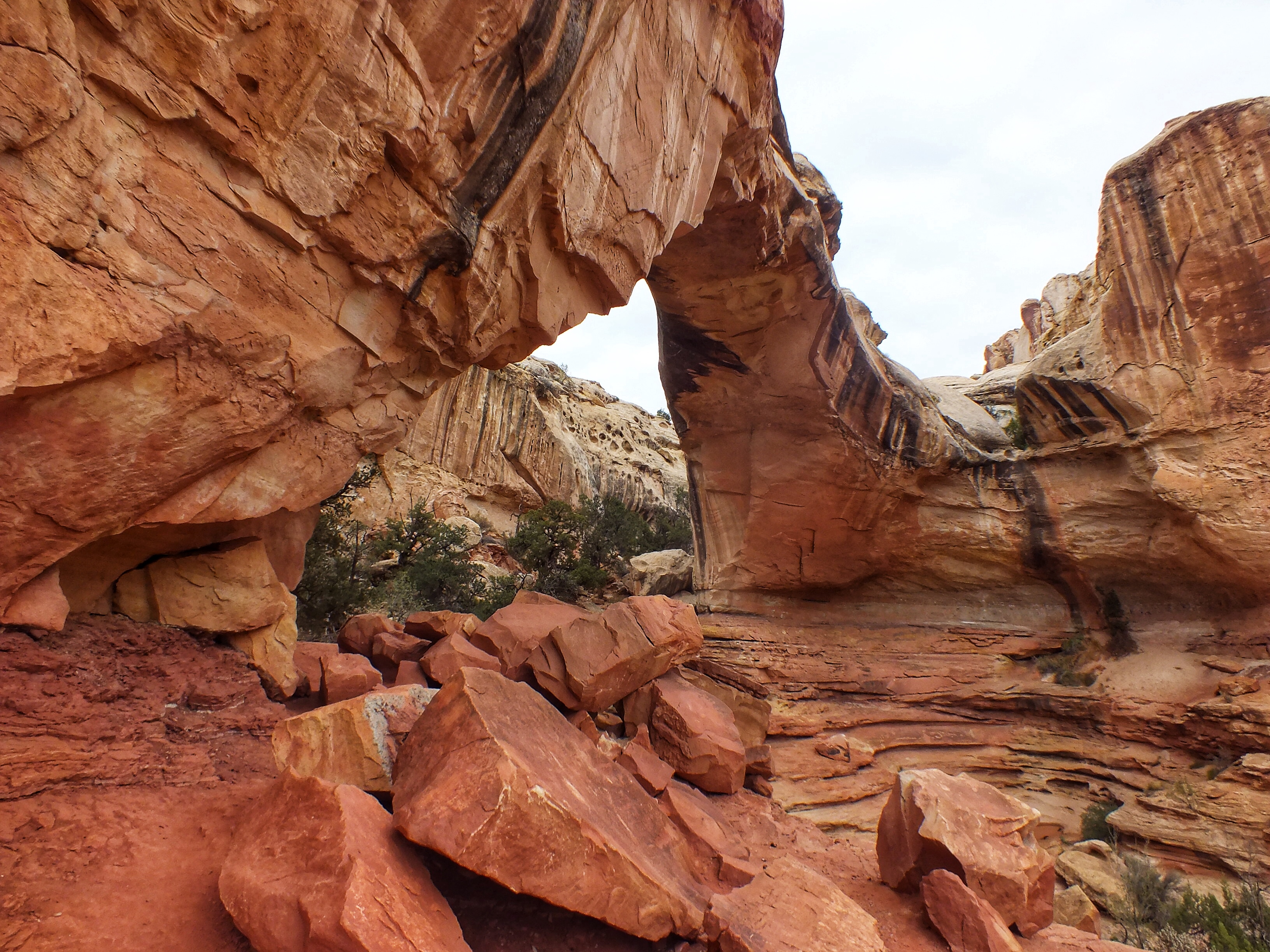 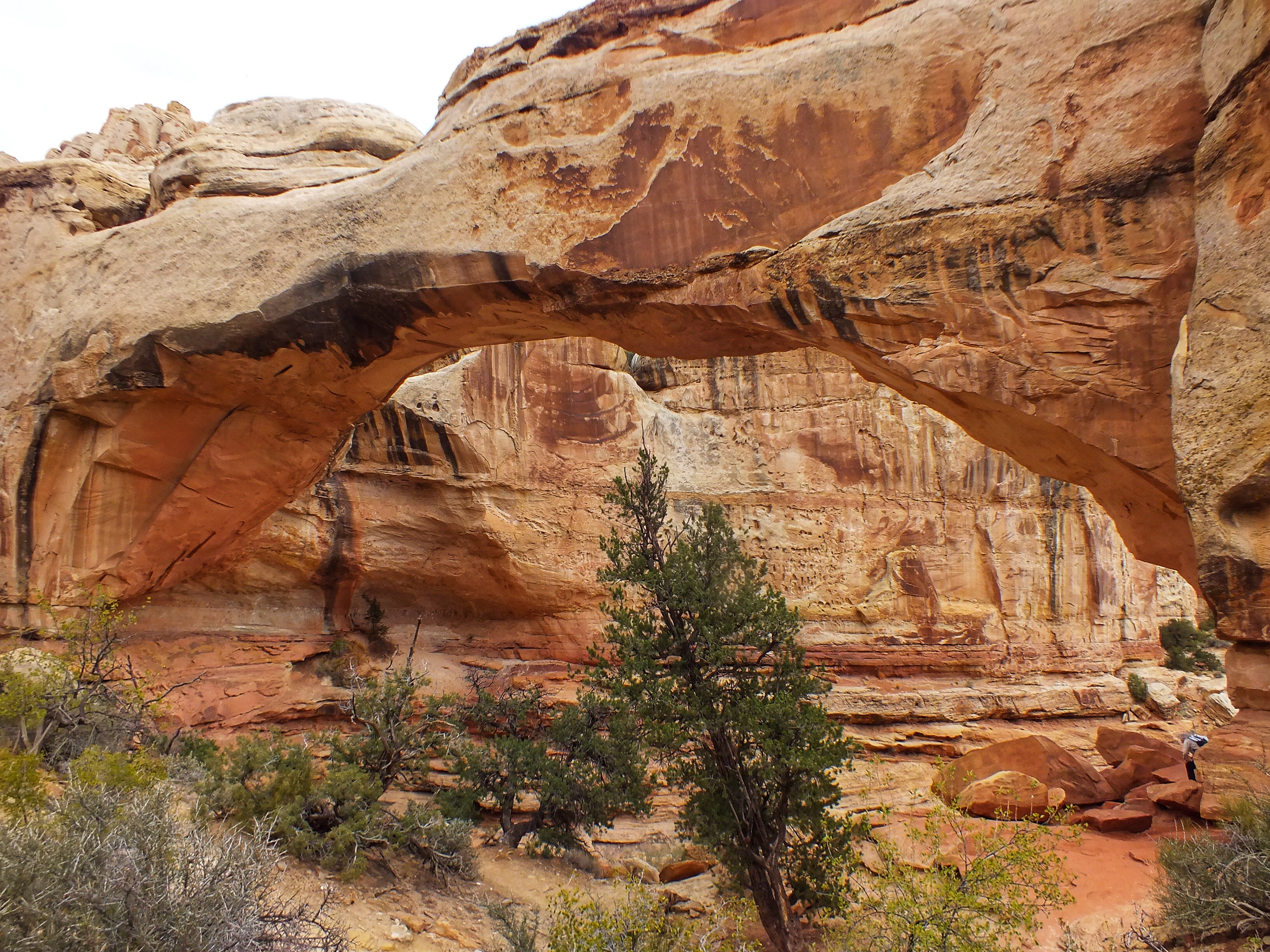 A view of the Fruita Historic District from the bridge trail. 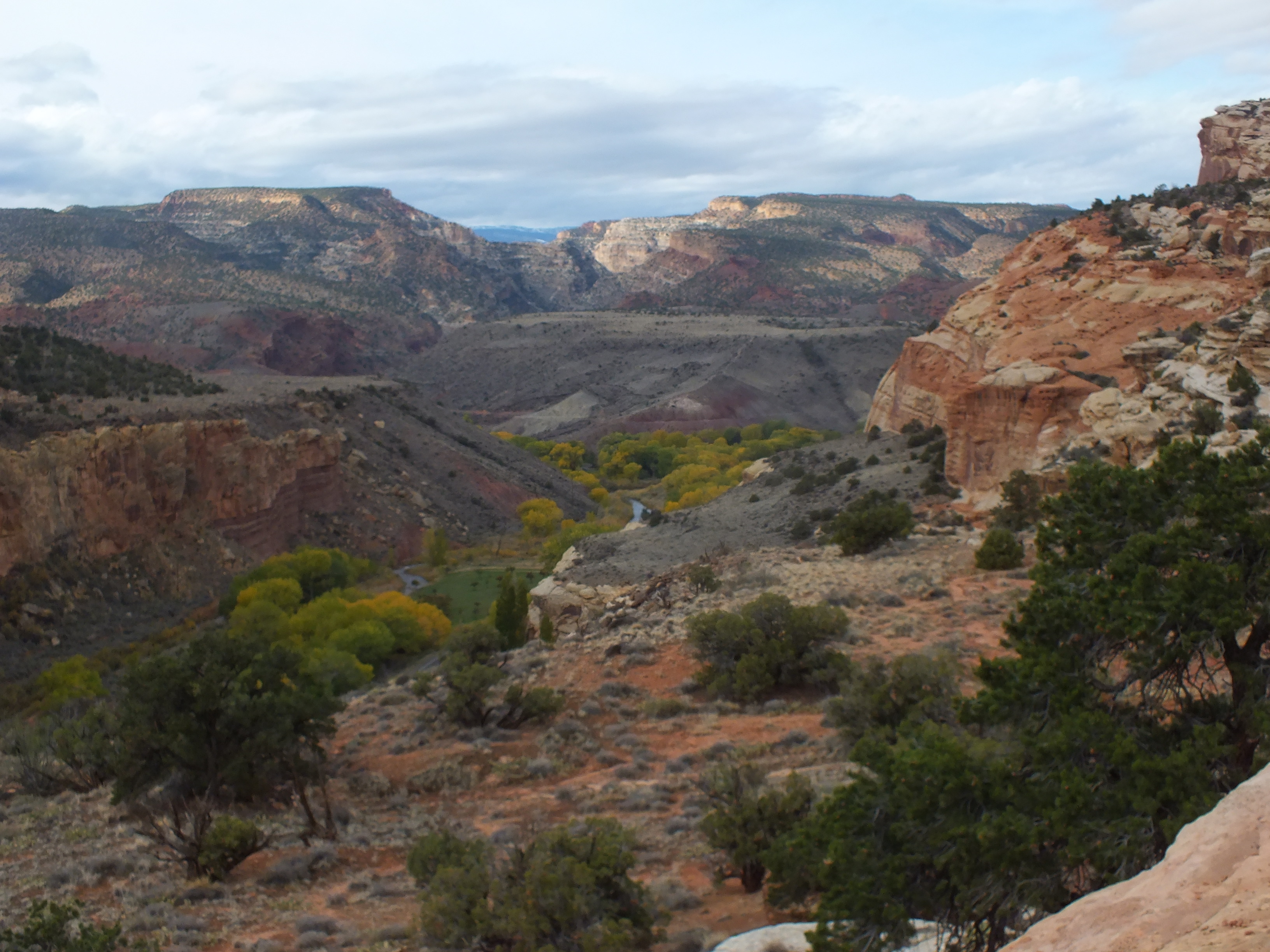 We drove a short way down the road and stopped again to see the petroglyphs on the cliff. The figures of animals and people were done an estimated 700 years ago by local Indians. 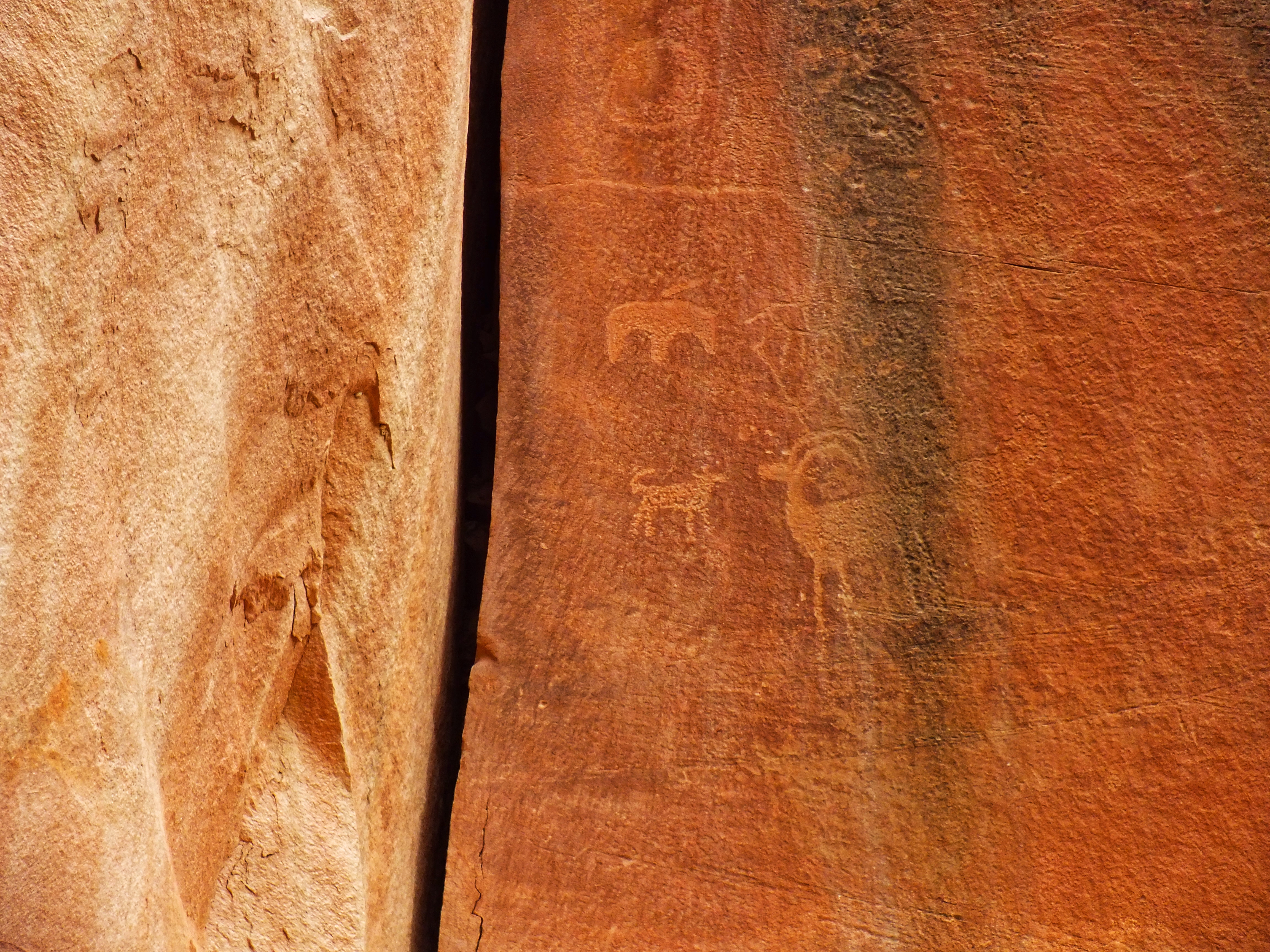 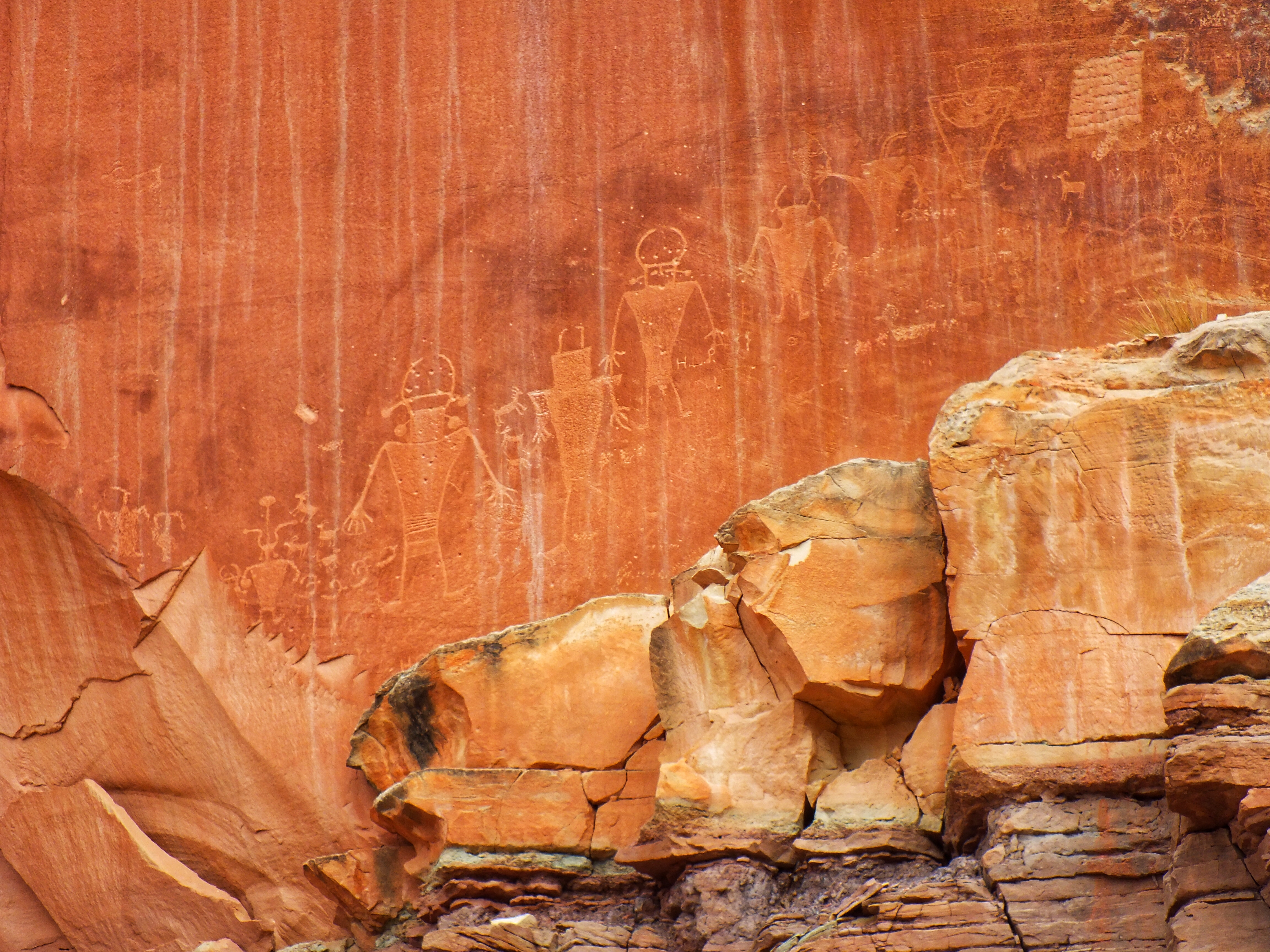 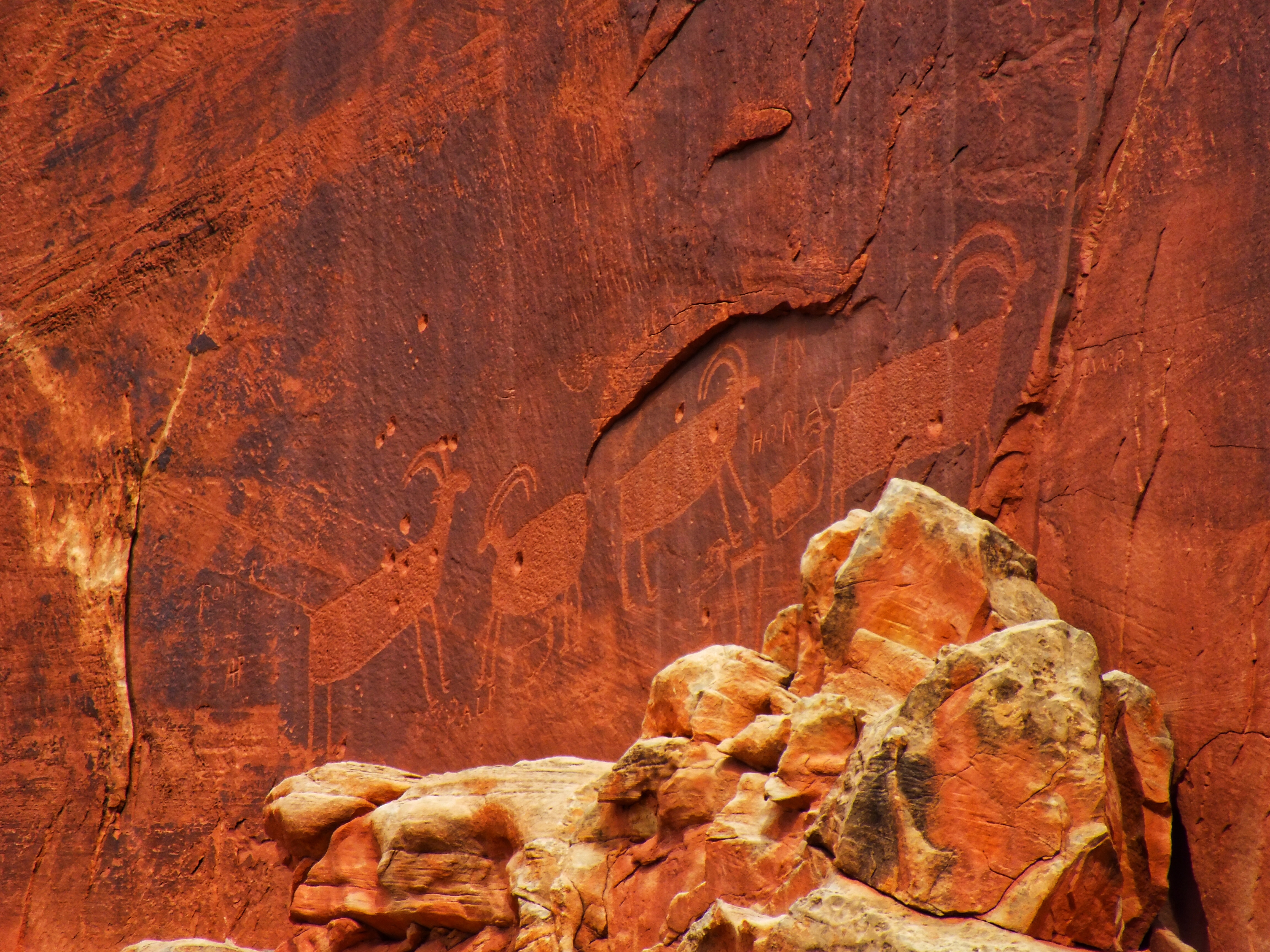 We stopped at the Gifford house, built in 1908 by a Morman polygamist. The last owners moved out in 1969. It’s now a gift shop that sells fresh baked pies. I got triple-berry. My wife got cherry. Both were amazing. 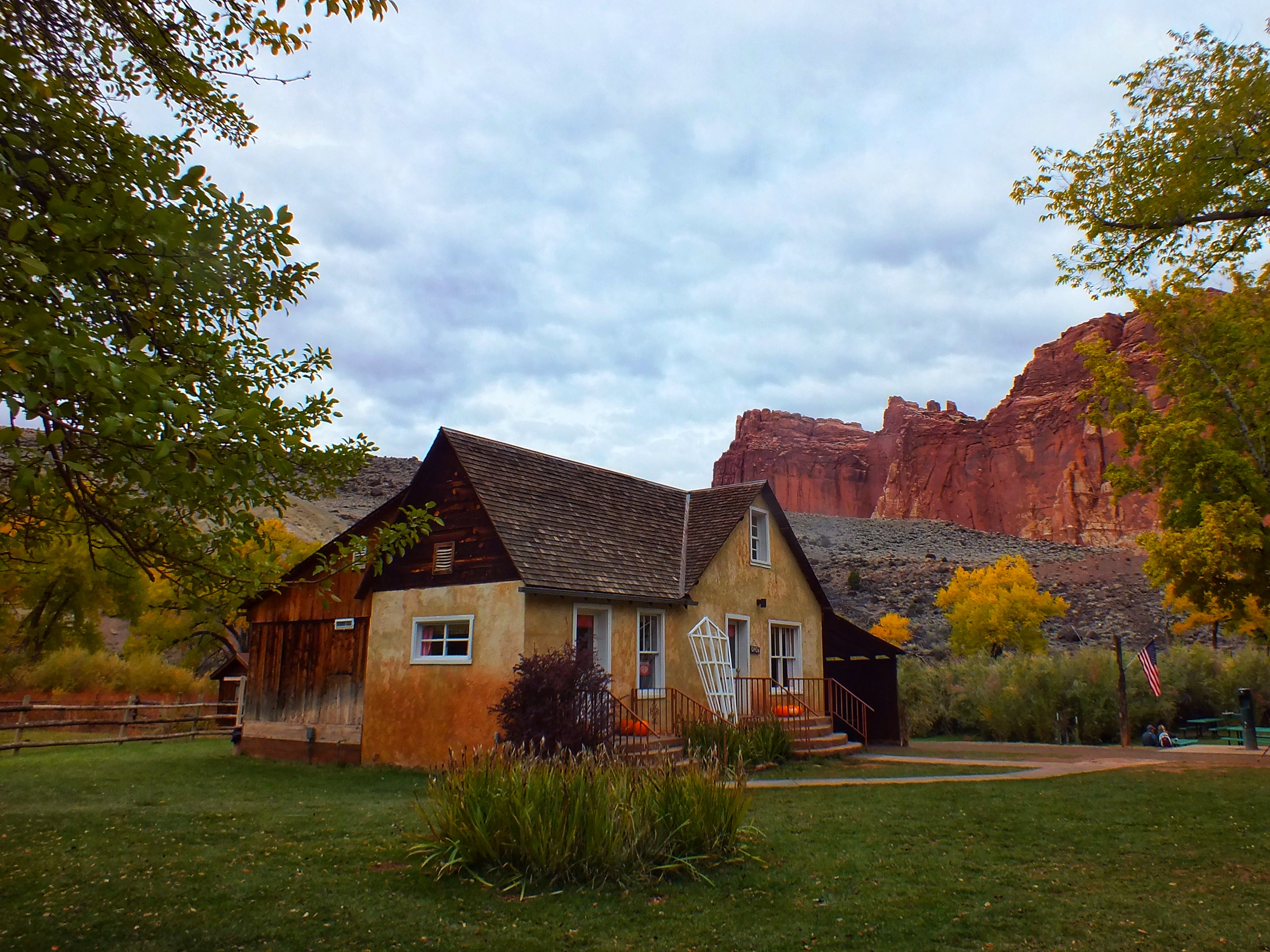 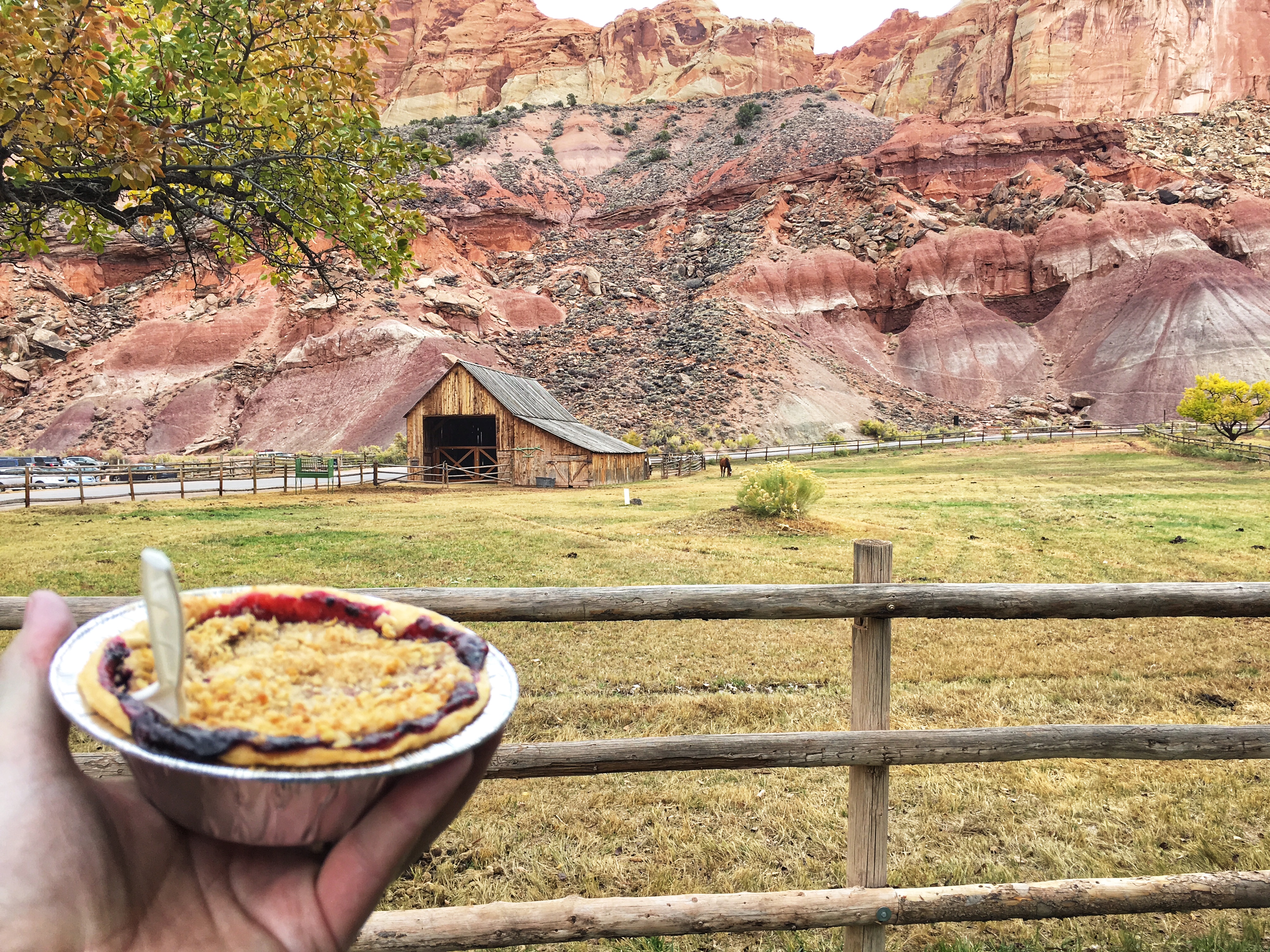 We drove the scenic drive along the Waterpocket Fold, a ripple in the earth’s surface. There were two narrow dirt roads leading off the main drive, and we explored both of them. 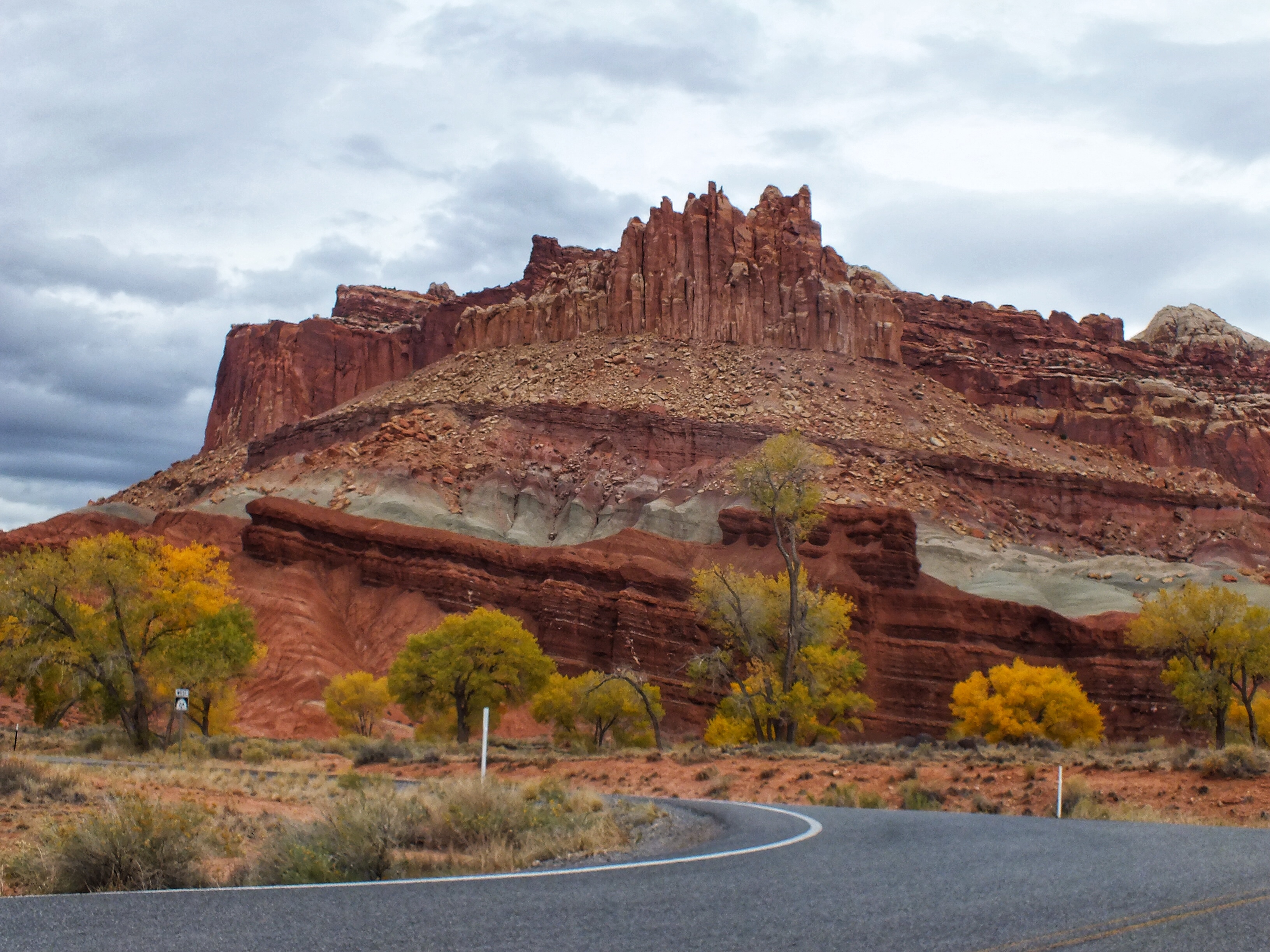 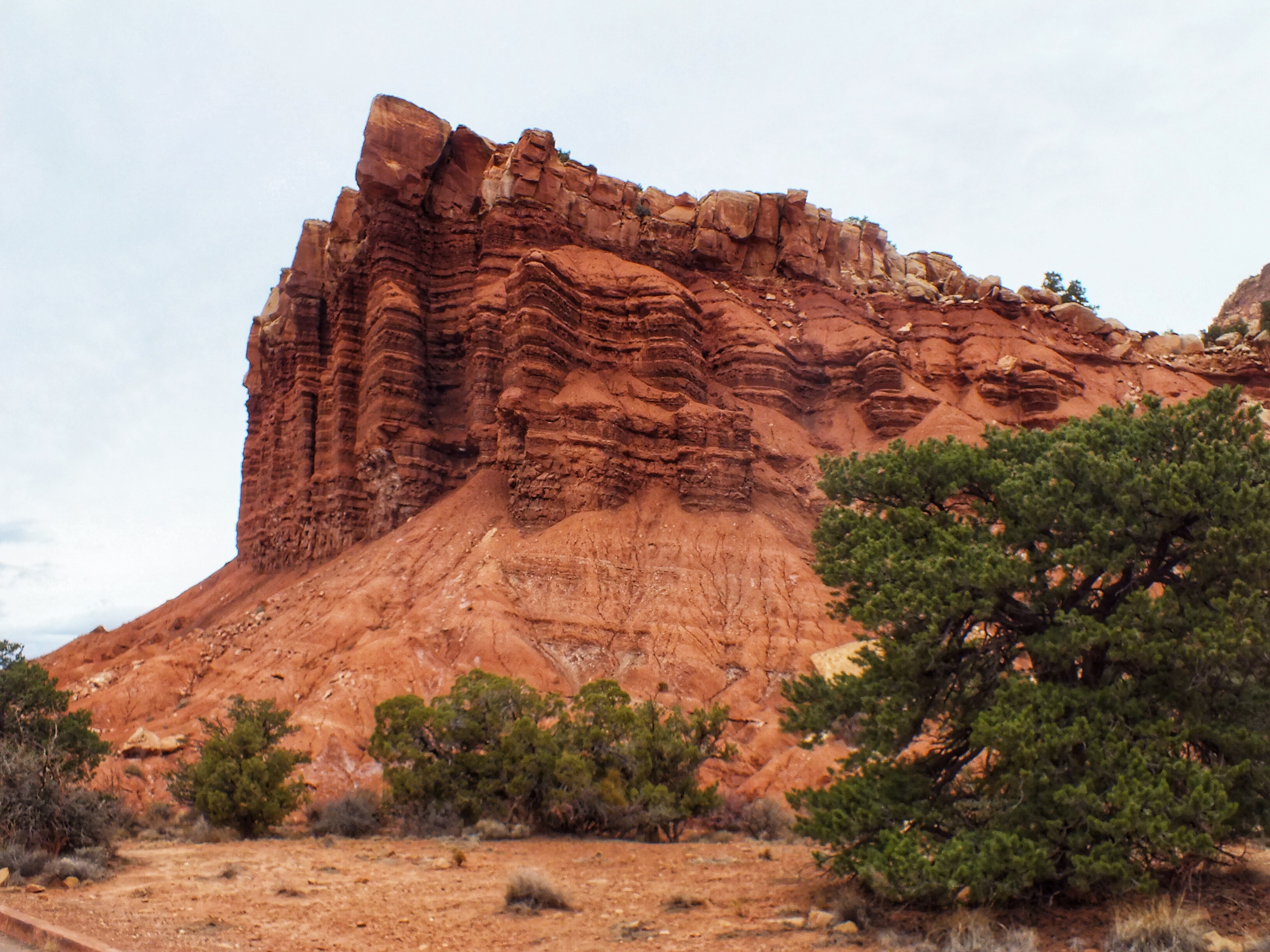 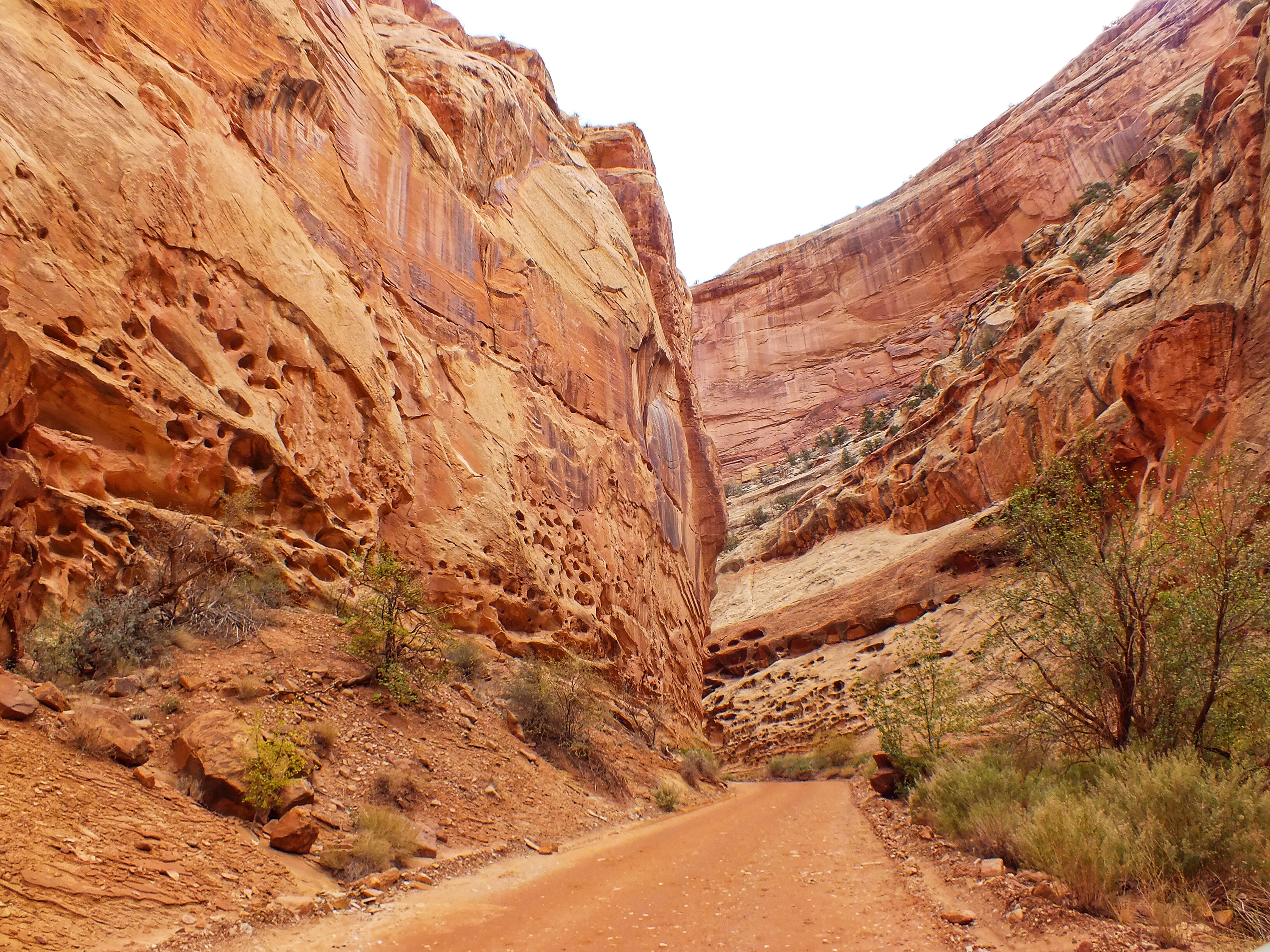 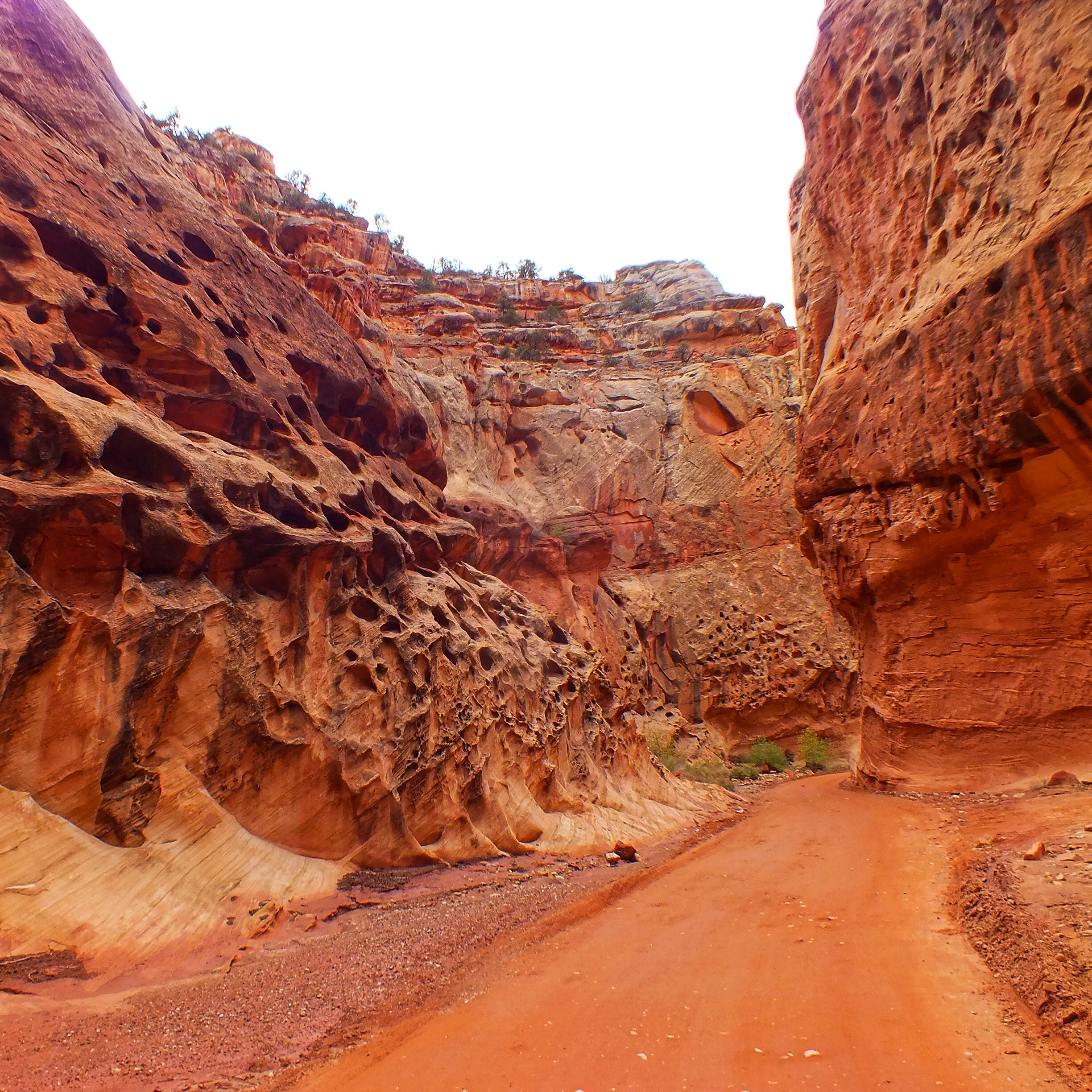 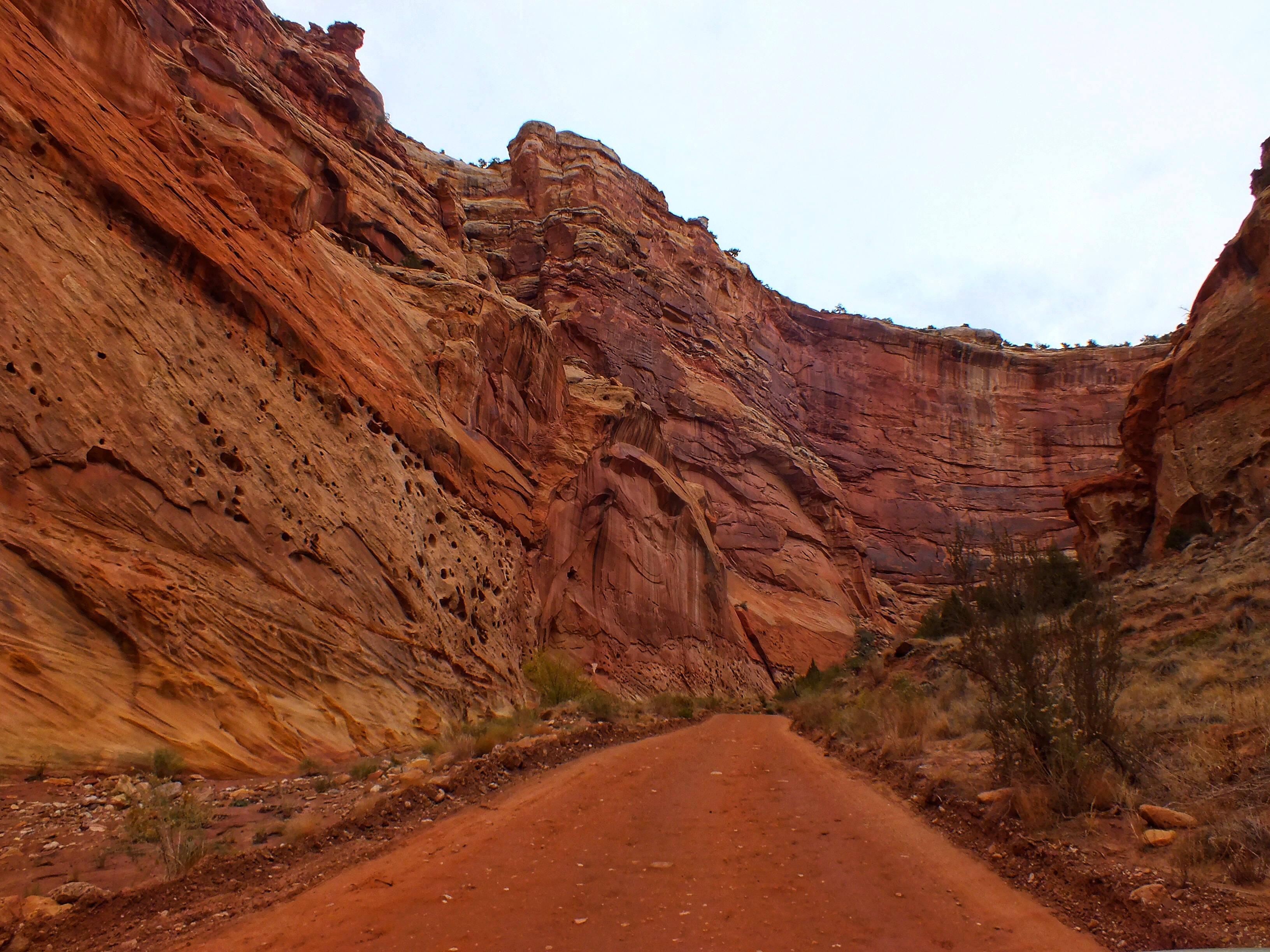 We felt like we were alone in the world, but at the end of both drives, there was a crowded parking lot. We didn’t get out to explore because we still had a long way to drive.

As we were leaving the park, gray skies closed in and it began to rain. 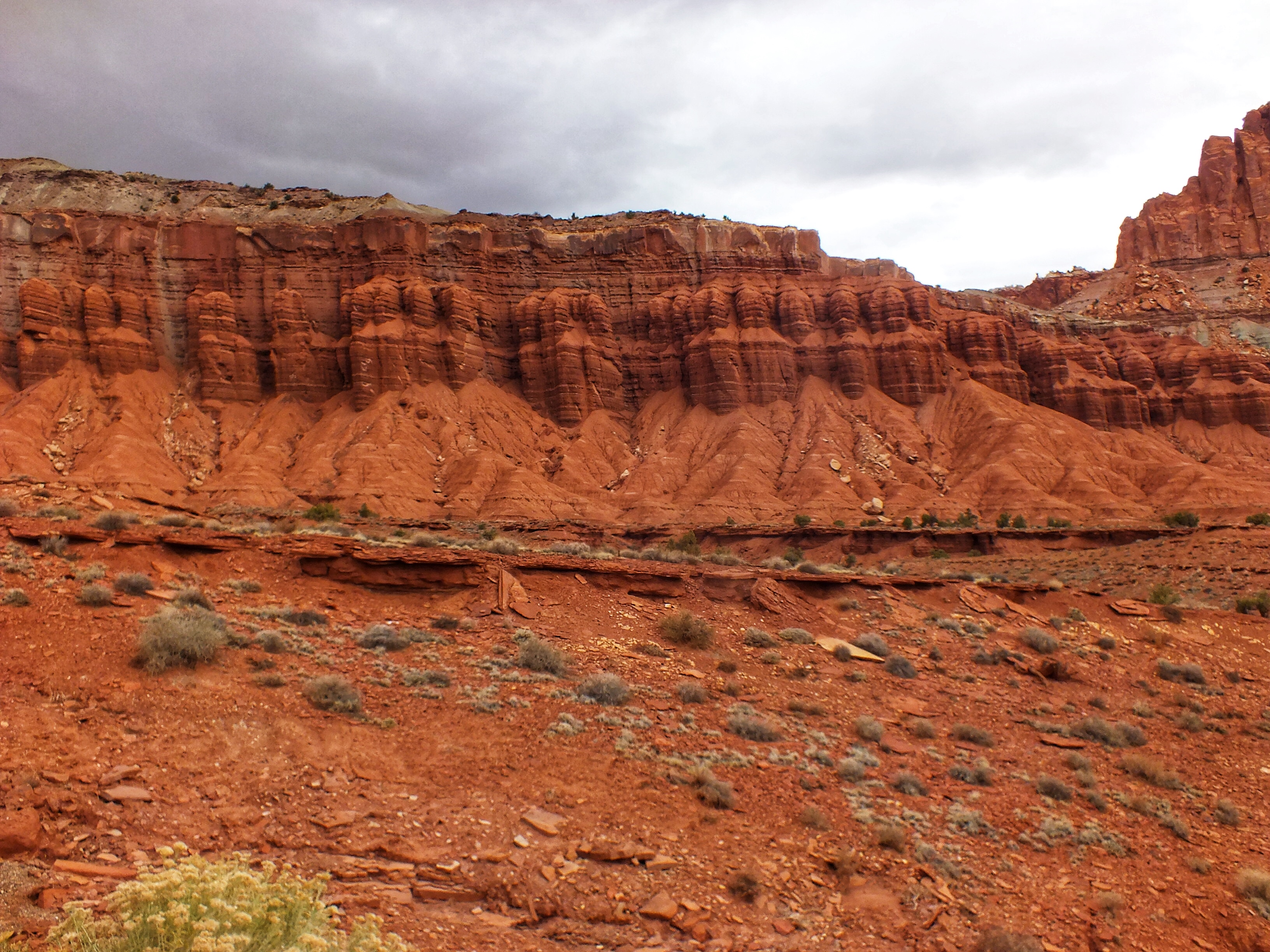 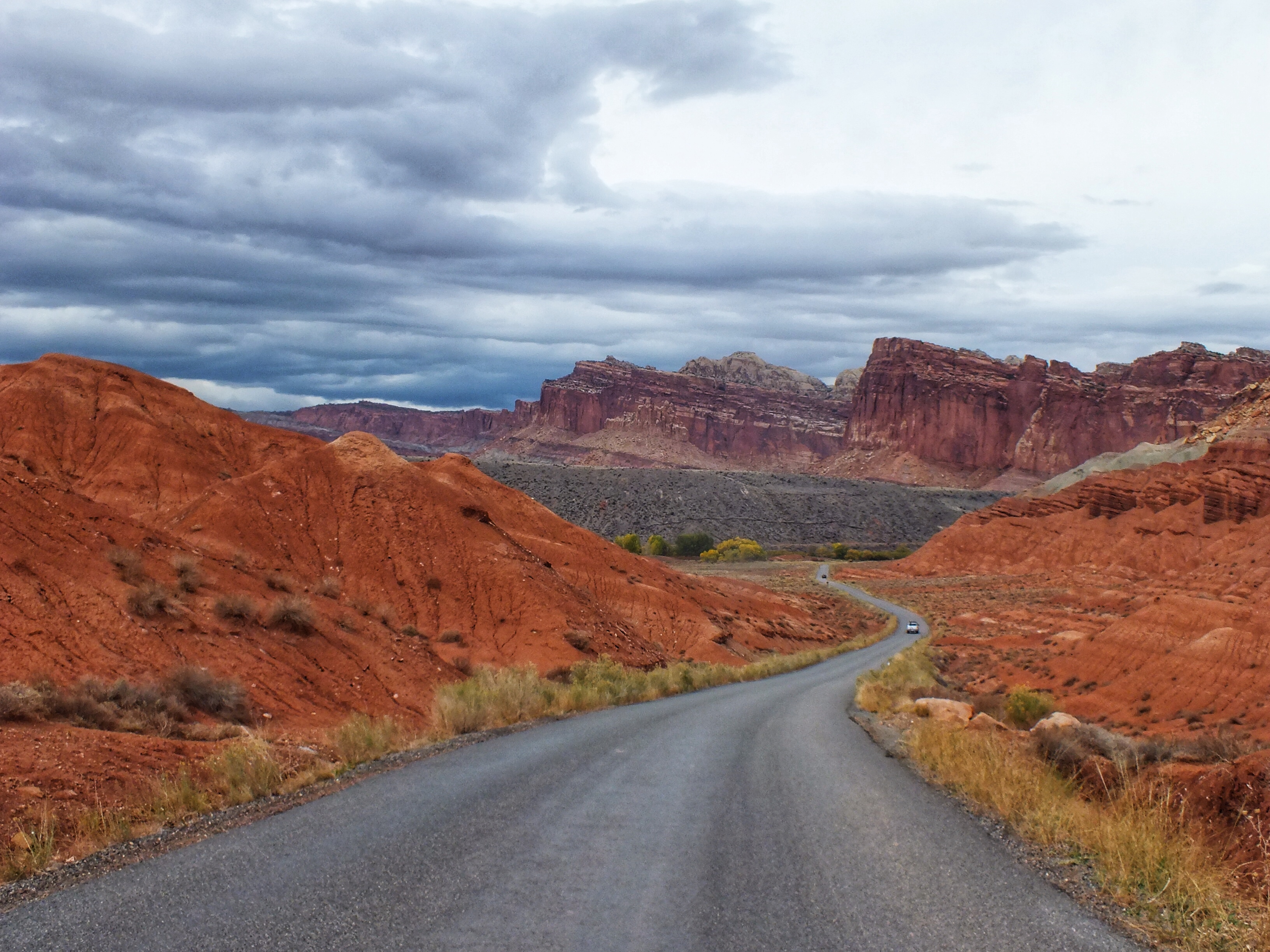 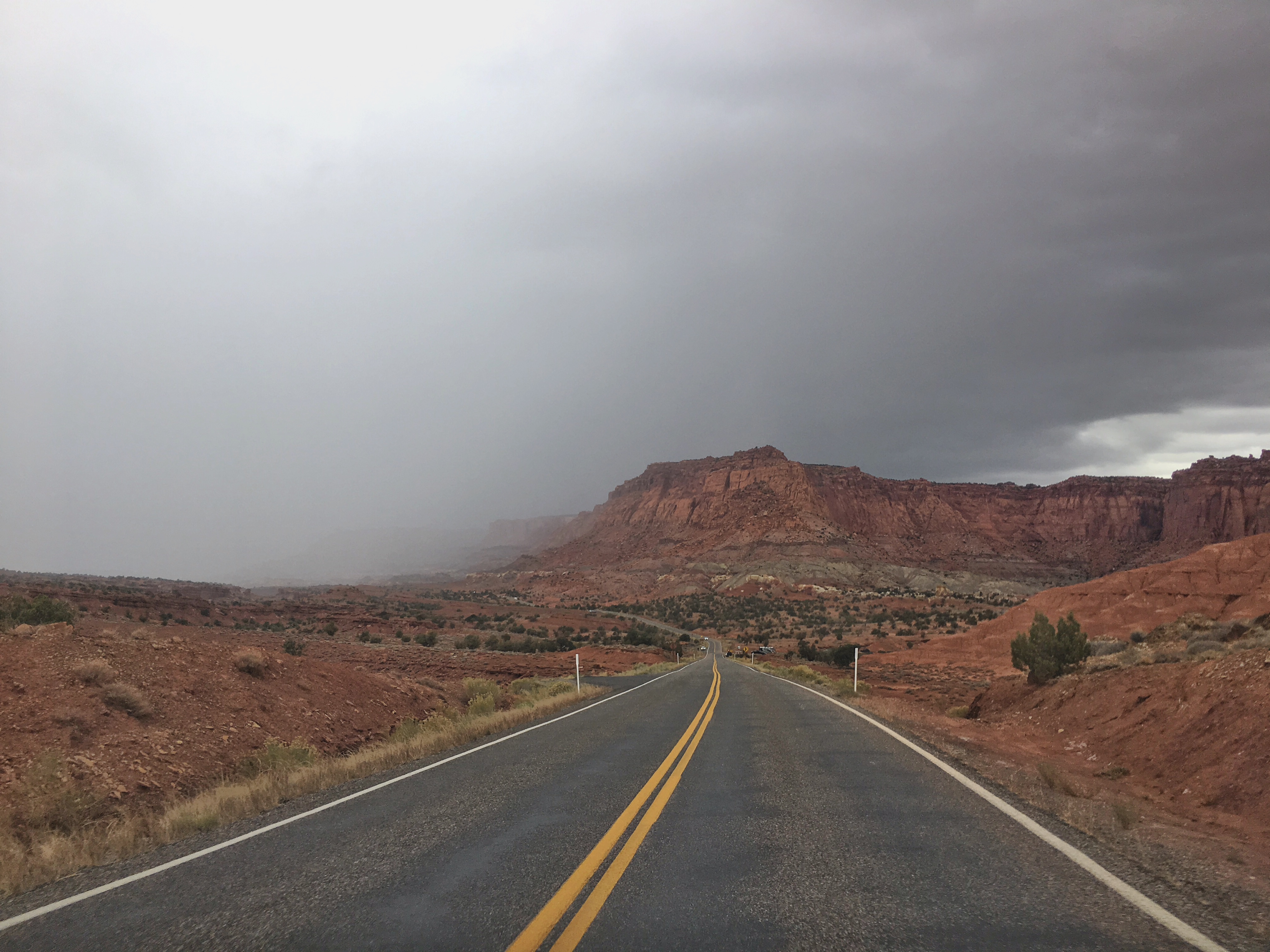 Capitol Reef was by far the least-crowded of the National Parks we visited. That probably accounts for why it was one of my favorites. That and the pie.