We drove on back roads from Springfield to Vandalia to see the building used as the state capitol from 1836-1839. The government was in Vandalia beginning in 1820, but this building wasn’t built until rumors started flying that Springfield wanted the capitol. It wasn’t enough, and the government moved in 1839. 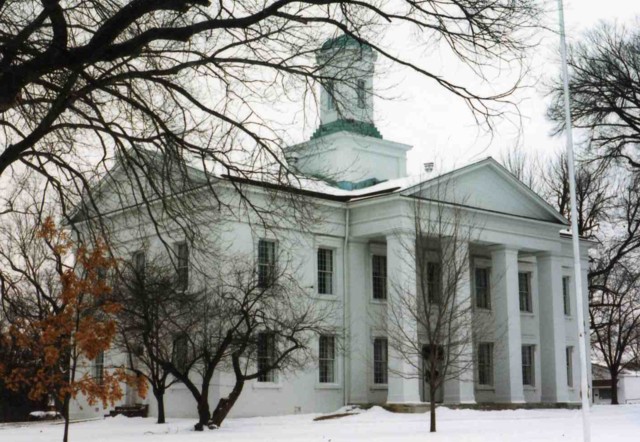 This building served as the county seat for many years, but it is still in its original condition, except for the portico on the front. It was decorated for Christmas, with greenery and fruit all over the place.

Again, we had the place to ourselves. The lady who gave us our tour was very much in love with her building and knew quite a bit about it. She geared her talk to daughter. At one point, she asked her if she knew what a “woof” was. My daughter said no, and the lady explained that it was a big wild dog. (She meant “wolf.”) My wife and I had a hard time not laughing because we hadn’t known what a woof was either.

Abraham Lincoln attended here (in the room below) as a state legislator in 1834, the first state-wide office in his political career. He made several speeches here, and it was in this building in 1837 that he received his law license.

The photo on the left below shows the Senate chamber. The Illinois State Supreme Court chamber is on the right. 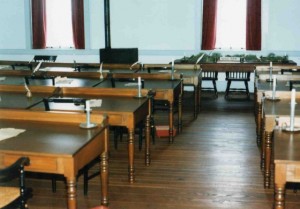 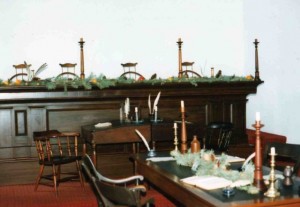 One more note: In front of the building is a large statue of a woman holding a child with another clinging to her skirts. It’s called the “Madonna of the Trail,” and it’s one of 12 similar statues placed by the Daughters of the American Revolution to mark the old National Road that ran between Cumberland, Maryland and Vandalia. The woman symbolizes “the courage and faith of the women whose strength and love aided so greatly in conquering the wilderness and establishing permanent homes.” 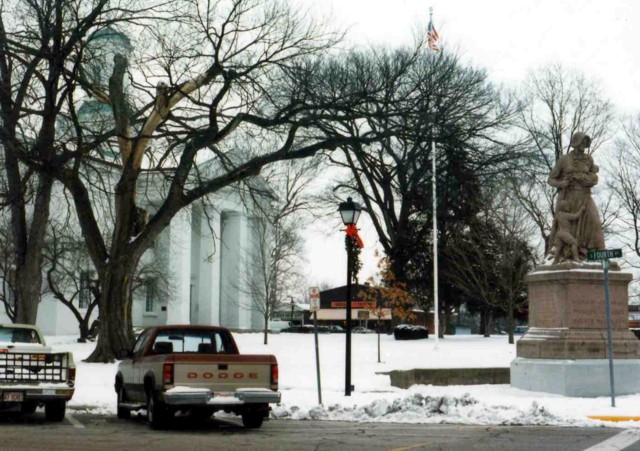