Walk to Wisconsin (chapter one)

On the Saturday before Memorial Day, I woke up with an urge to do something I hadn’t done before. The weather forecast was for a high in the low 70’s with increasing cloudiness and a 20% chance of afternoon rain. That seemed like something I could deal with, so I walked to Wisconsin.

I left home at 8:10 in the morning with a bottle of water and some trail mix. This is Lake Killarney. I’d walked about three miles at this point. 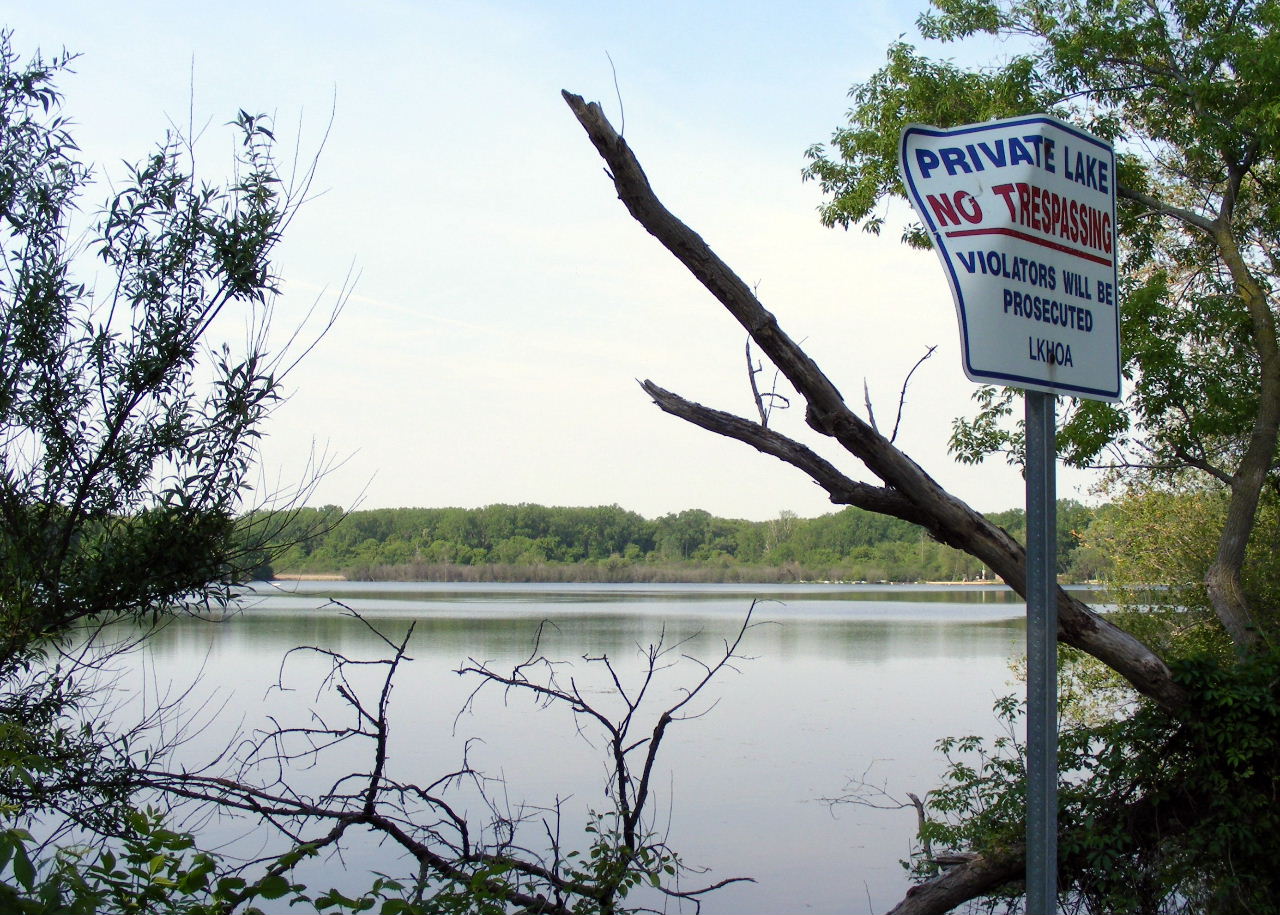 Last month, when I asked for ideas of things to photograph near home, one friend suggested water towers with town names on them. I decided to log today’s walk with water towers. Here’s the first — Crystal Lake. 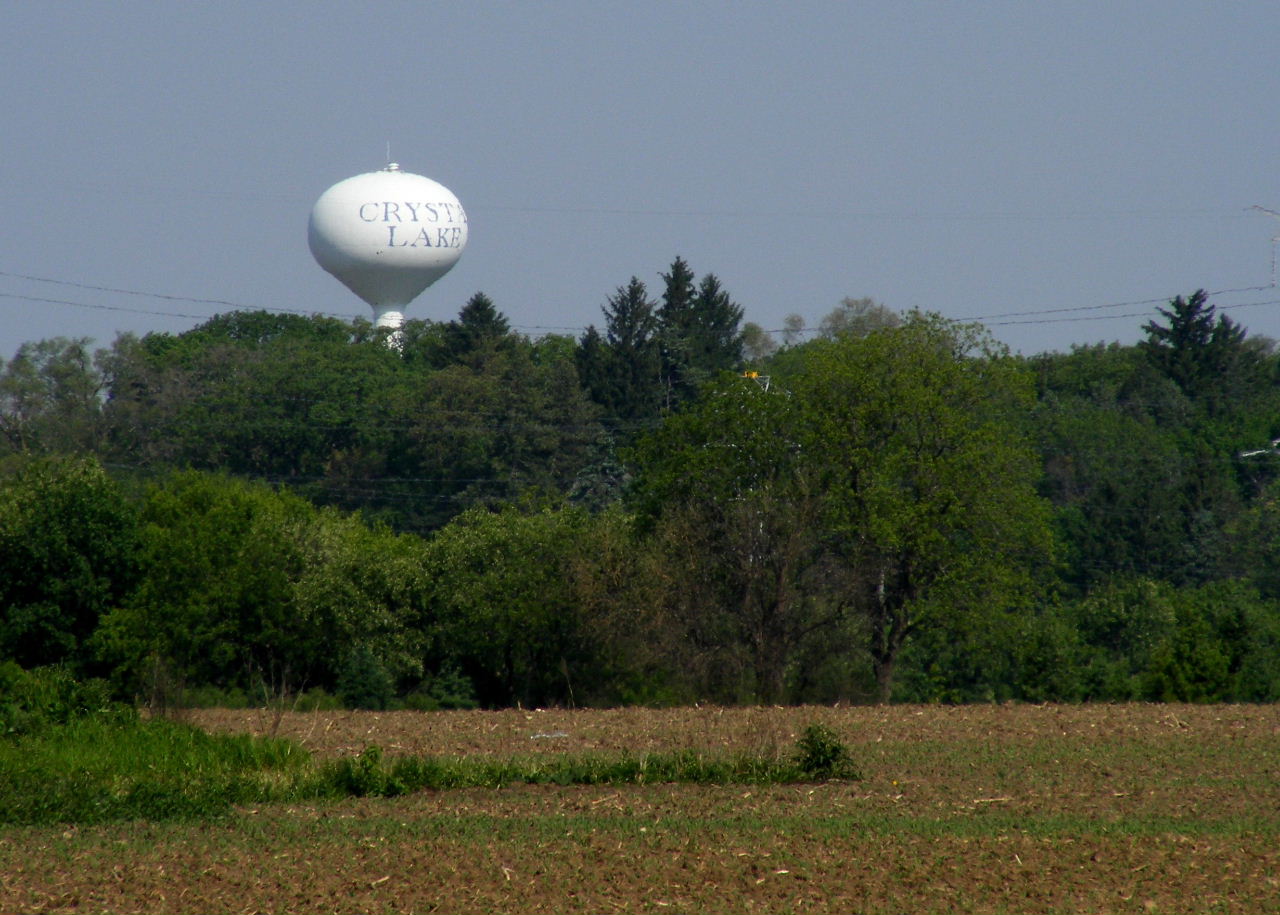 My route ran along a busy commercial route for a couple miles. That’s where I spotted this herd of bears. I always wonder about things like this. Are there really people who drive somewhere and suddenly say, “Hey, look! Wooden bears. Let’s go buy one”? 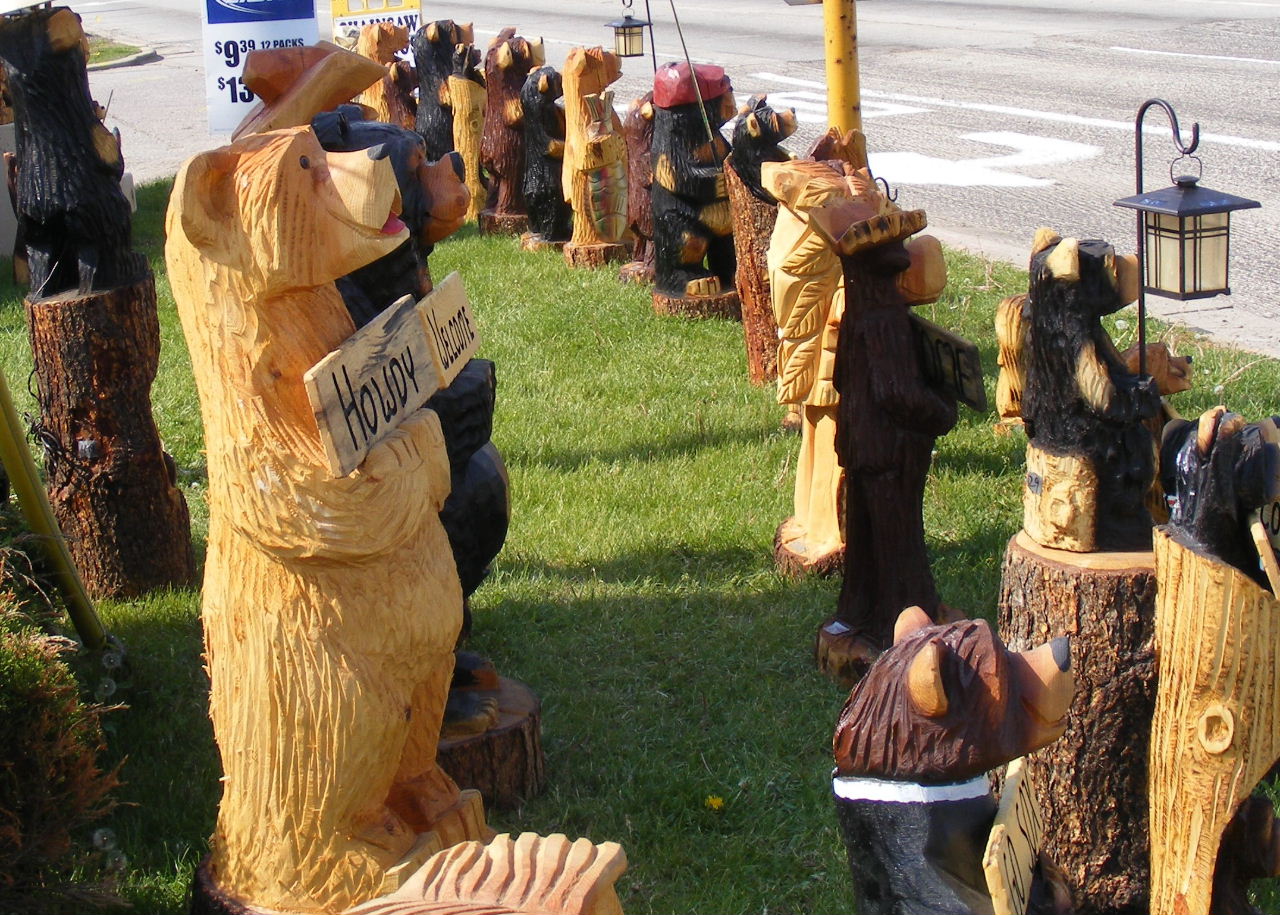 I passed the Palmer House, about which I know nothing more than you do. 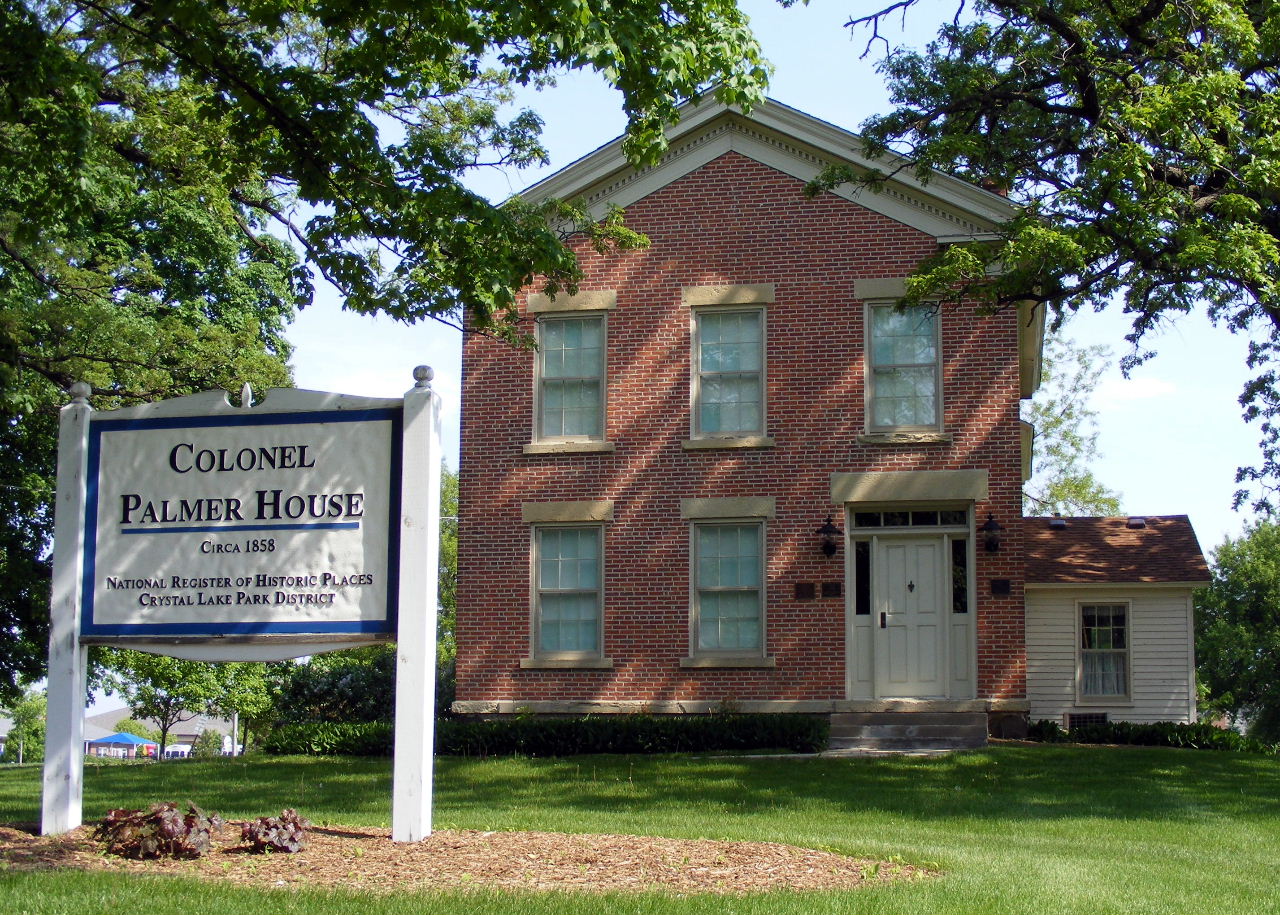 Instead of taking the shortest route, I headed west to the McHenry County Bike Path — because miles walked on that path count towards the Century Hiking Club and because a path is a more pleasant place to walk than a roadside. I picked up the path near downtown Crystal Lake. I’d walked almost exactly eight miles at that point and had been walking for almost exactly two hours. 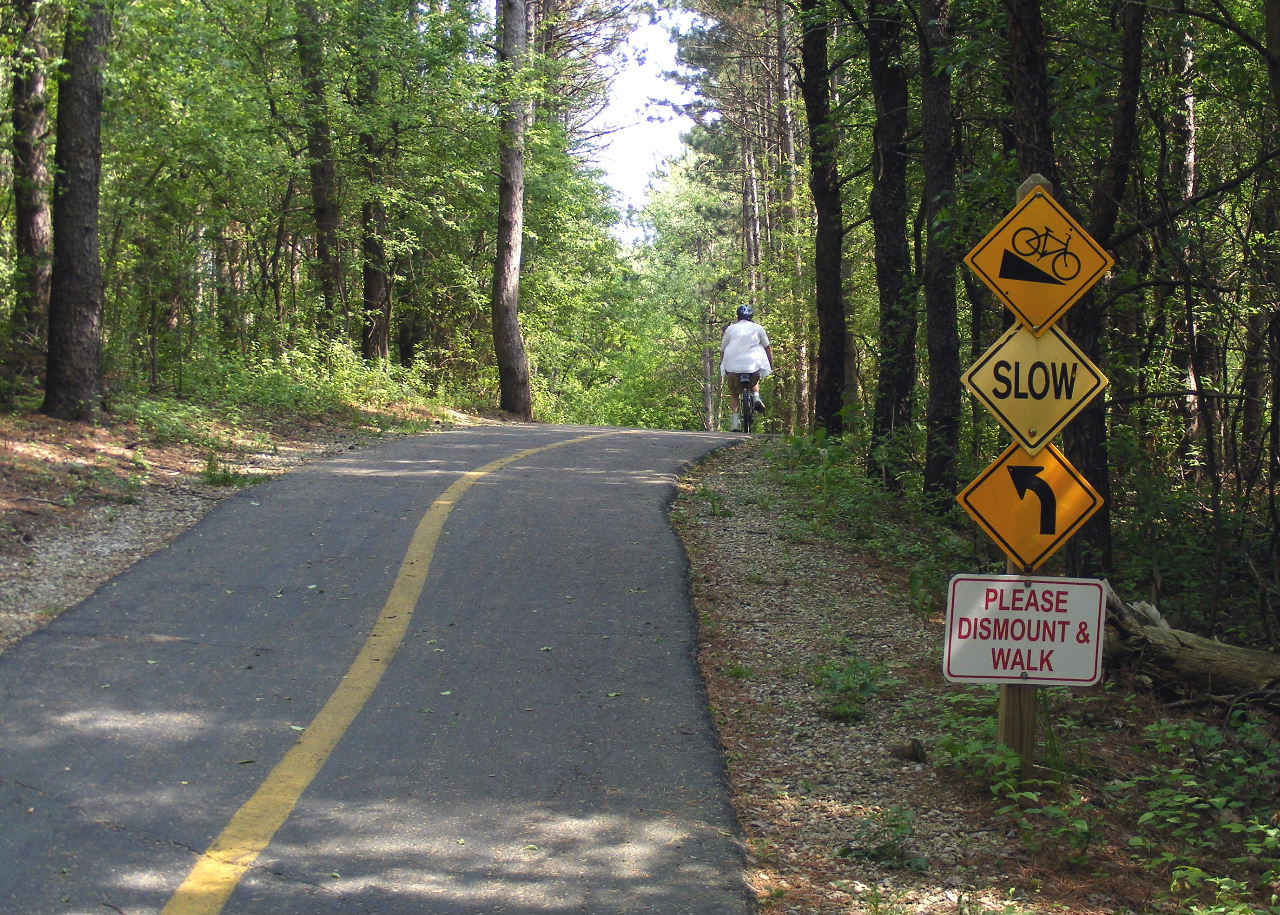 The path runs through Stearns Woods for a couple miles. This is a Crystal Lake forest preserve, and it’s by far the hilliest section of the entire trail. Four or five years ago, I had a near-maiming and dismemberment here. I had just purchased a new bike and was riding it for maybe the second time. I came whipping down this very hill (below) and around this very bend to discover a family with about six kids standing across the entire path just staring at me. Not one of them moved. I had three choices:

Option one was the most inviting, but I decided on a combination of 2 and 3. I went off the path onto that very narrow strip of gravel, skidded, missed a tree by a fraction of an inch and somehow bounced back up onto the path. Both feet had been jarred off the pedals. I wobbled back and forth for a little ways and finally recovered. I turned back to look at the family. They were still standing in the same spot, staring vacantly at me as though I were a show put on for their amusement and not a very good one, at that. 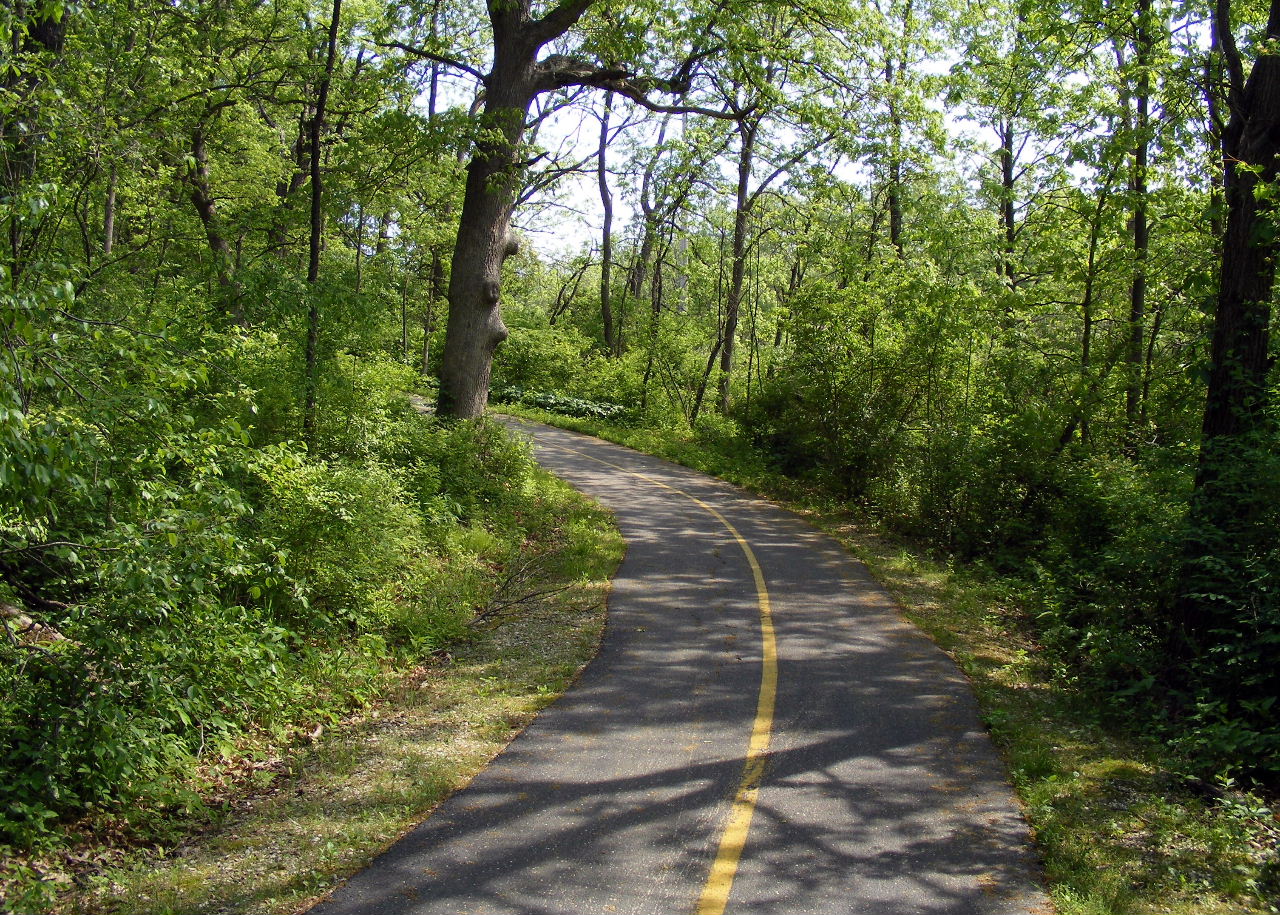 This is what passes for a forest preserve in these parts. 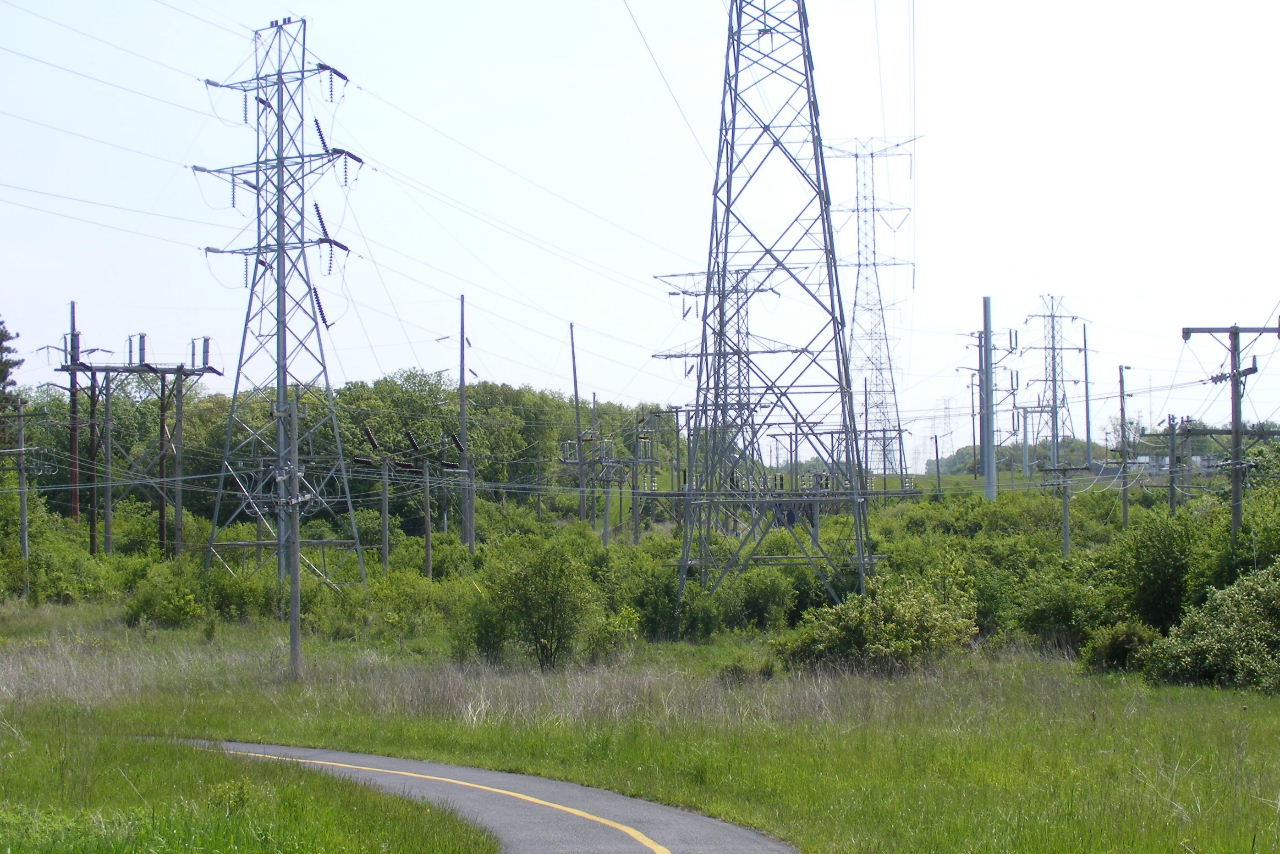 North of Crystal Lake, the tail runs alongside an active train track. The brochure says it is “one of the country’s longest trails along an active rail corridor.” I’m not at all sure why that’s an accomplishment. For much of the way, a fence with two strands of barbed wire runs between the track and the trail. I’m guessing some bicyclist complained, because every few miles there’s a sign on the fence that says, “barb wire strands required by railroad.” 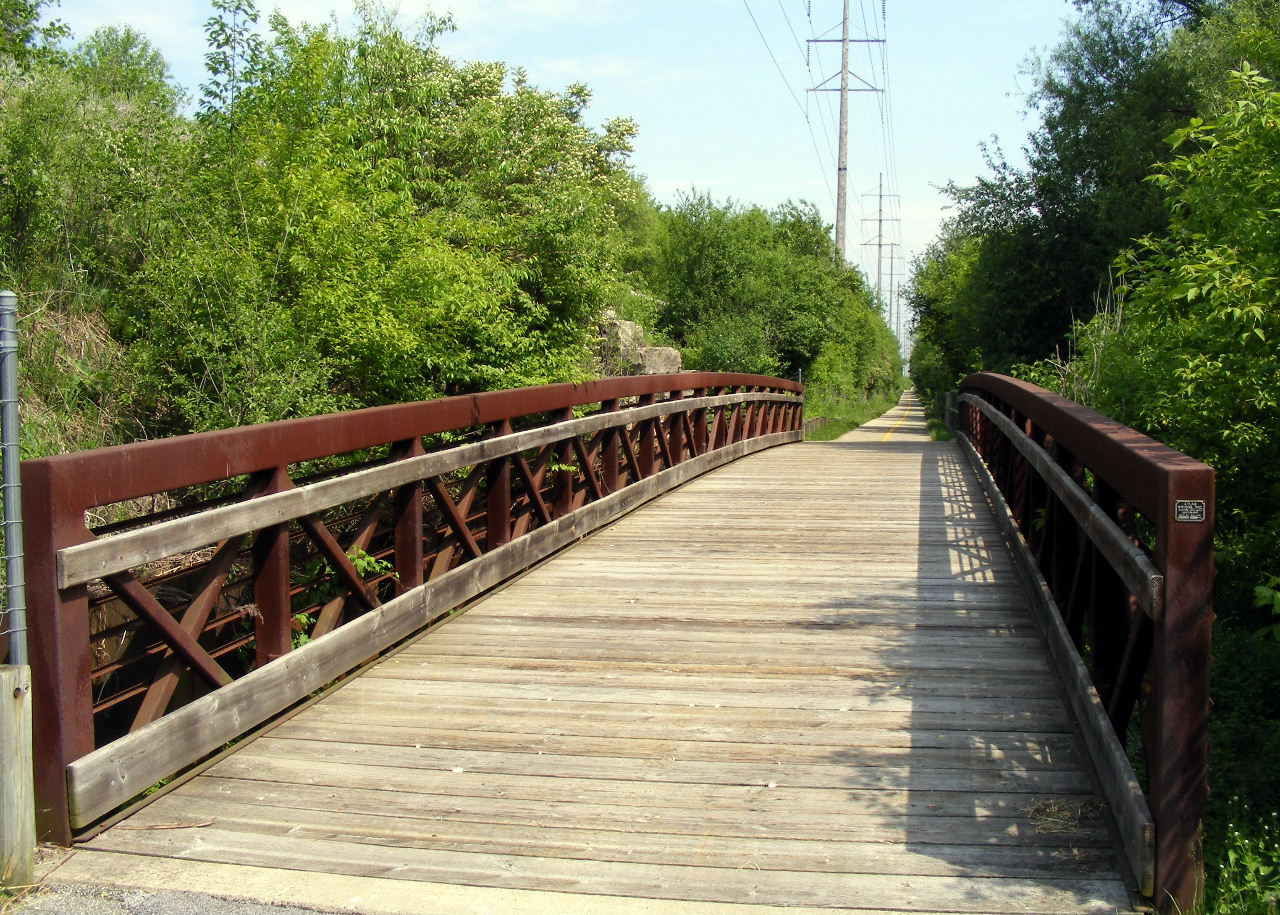 As for being “active,” the only traffic I saw on the tracks during my seven hours on the trail was a pickup truck. 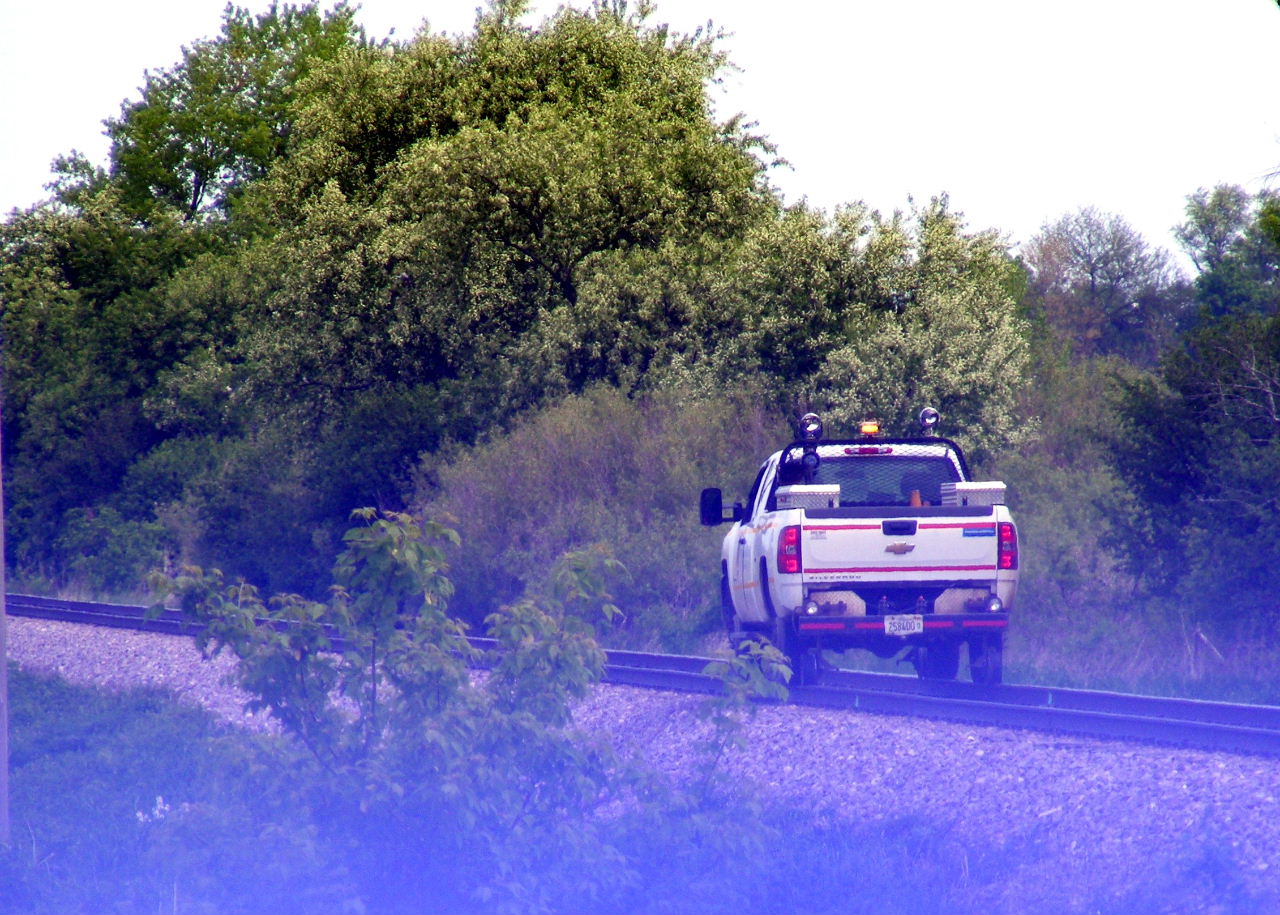 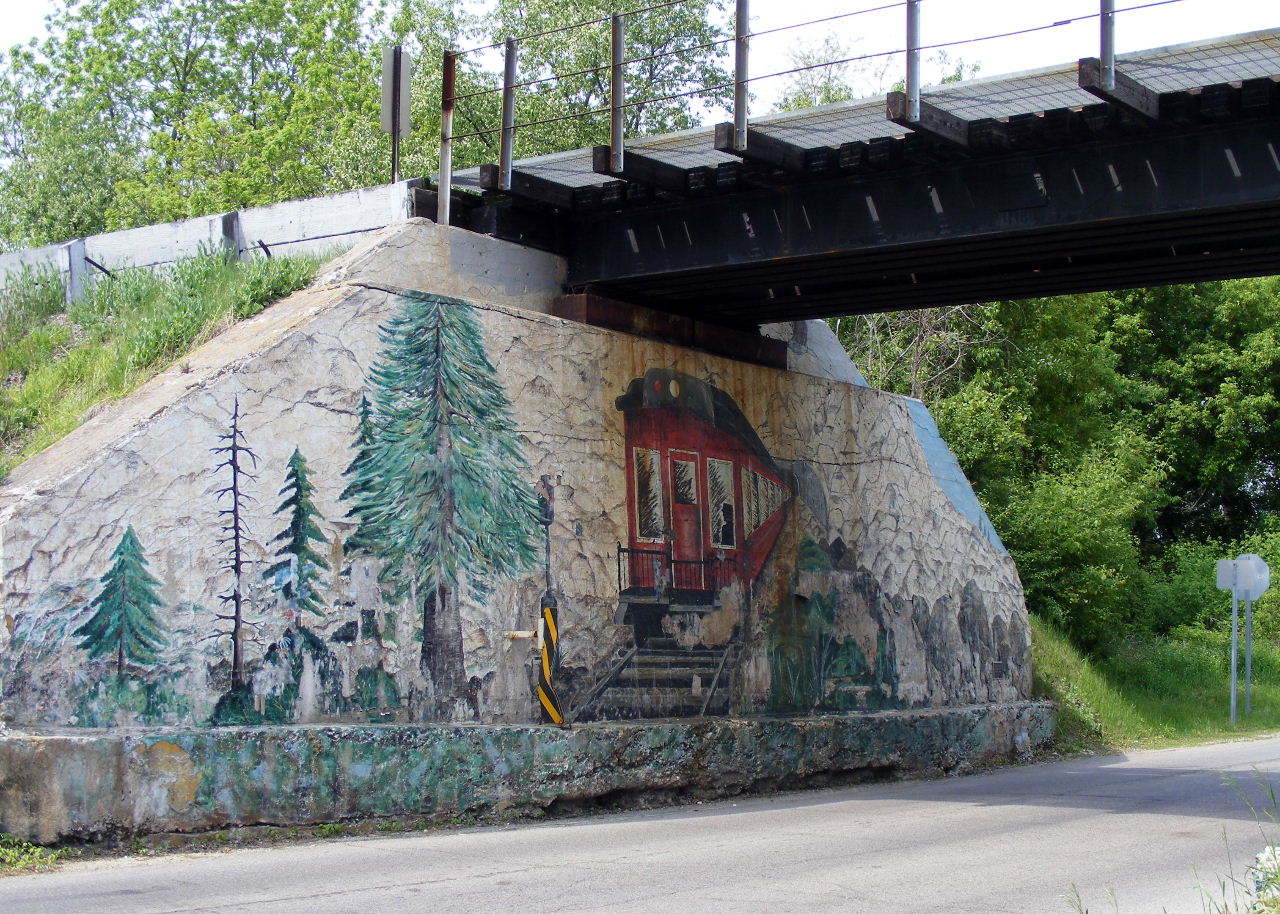 This was one of several places where the barbed wire fence (required by the railroad) stopped and the trail ran right next to the tracks. You can see the fence starting up again behind the purple Ds. 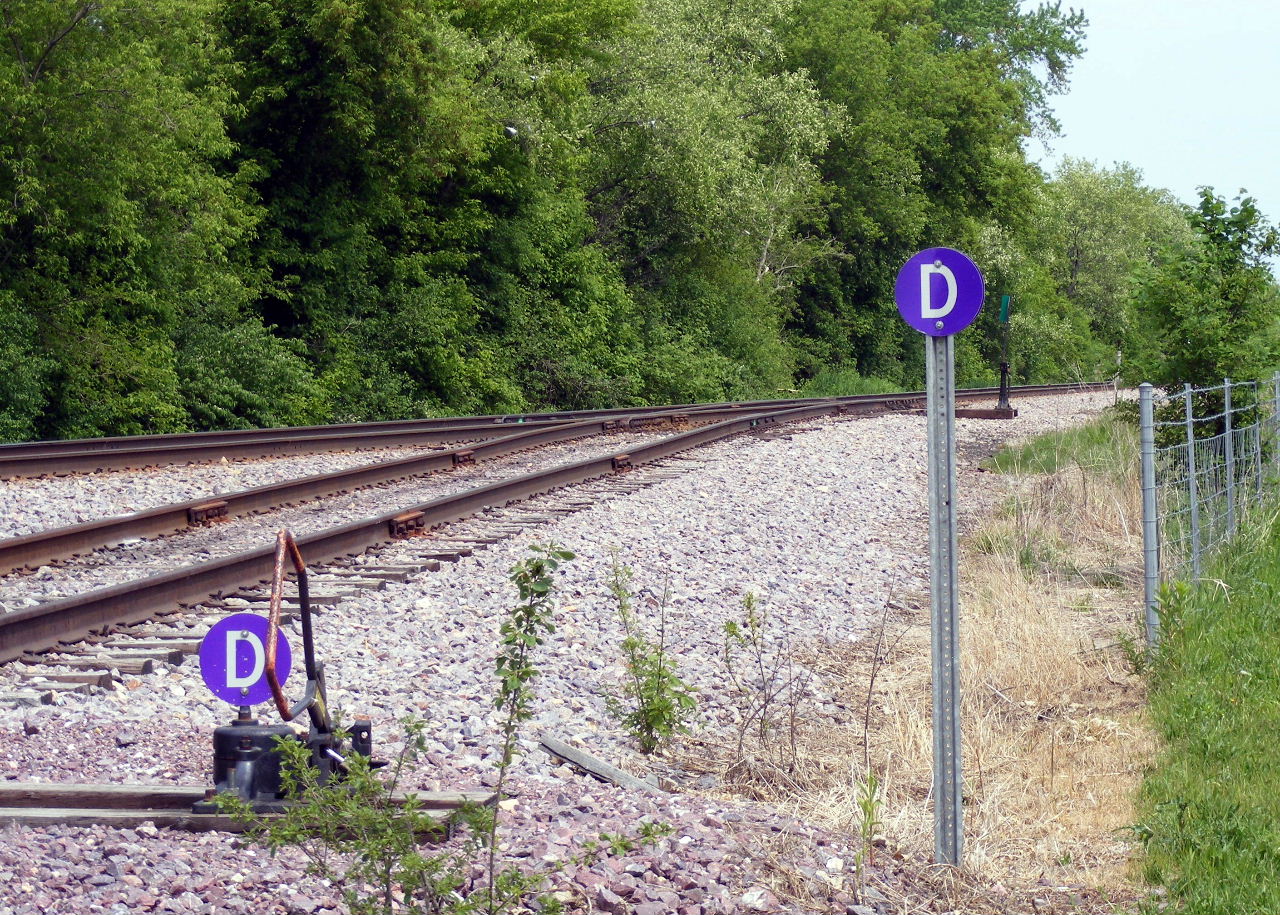 I was about 10.5 miles from home at this point.

Tune in tomorrow for chapter two.

4 Responses to Walk to Wisconsin (chapter one)