Whooping Cranes are huge and beautiful birds that I would very much like to add to my life list. (Read to the bottom to find out why I now have.) The problem is that there are very few of them in the world and they never come anywhere near where I usually go. The only wild flock migrates between Wood Buffalo National Park in Canada and Aransas National Wildlife Refuge in Texas.

I was at a conference in Texas two years ago with my sister. We stayed a few extra days and drove to Aransas to look for the Whooping Cranes, but managed to pick the day before the first one arrived that fall. I don’t know when, or if, I’ll ever get back, so I decided to look for the next best thing — the sorta-wild Whooping Cranes at Necedah.

In 1941, there were 15 Whooping Cranes left in the world.  Thanks to conservation efforts, that flock now numbers around 200 birds. But what if some disaster — like an oil spill in the Gulf of Mexico — destroyed their habitat?

To prevent this, members of several conservation organizations have been breeding Whooping Cranes in captivity and attempting to reintroduce them to areas where they formerly lived. The main location of this effort is Necedah National Wildlife Refuge in central Wisconsin. Since 2001, cranes have been raised in Wisconsin in the summer and taught to migrate to Florida. The effort has been a great success. About 100 birds are now migrating back and forth and several pairs have bred. There remains one problem — almost all the nests have been abandoned, probably because of  the huge swarms of black flies in the marsh. Two chicks were hatched in June of this year and the oldest cranes are just entering their prime breeding years, so there’s hope.

Three or four years ago, we had an early-December snow storm in northern Illinois. I was shoveling my driveway when I heard a huge flock of late-migrating Sandhill Cranes fly over. I stopped shoveling and watched them for a few minutes. I was about to go back to work when I saw two more birds much higher in the sky. They were unmistakably large and white. They were moving incredibly fast on the strong north winds, and I had no time to run inside and grab my binoculars. I’m almost certain they were Whooping Cranes from the Necedah flock — right over MY house — but I can’t be sure.

Even if they were, I can’t count the Necedah birds for my bird list. There are rules for birding, and although I’m not a member of any club, I still follow them to keep things legitimate. The rules state that all lifers must be wild, free-flying and members of self-sustaining populations. The Wisconsin Whooping Cranes are wild and free-flying, but they aren’t even close to being self-sustaining at this point. But they are still huge and beautiful. I decided to stop on the way north and look for them.

Naturally, you aren’t allowed to wander at will around the refuge disturbing the birds. There’s a tower overlooking Rynearson Pool at the south end of the refuge, and that’s where we went. It was a hot, muggy, but surprisingly bug-free morning. We walked the 100 yards from the parking lot to the tower where we were greeted by this view. 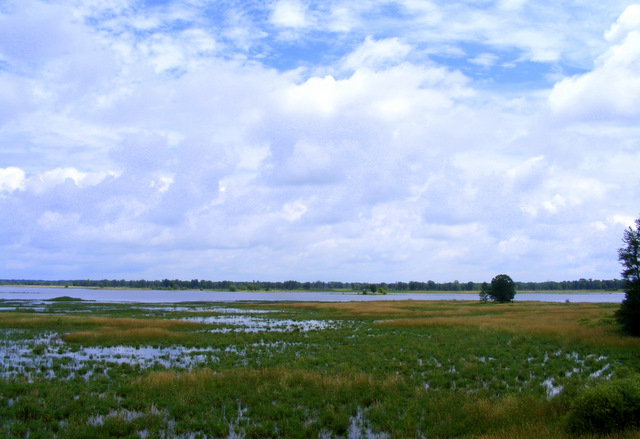 I had my binoculars and did a slow, careful scan of the area, looking for large birds. I saw a couple swans, a Great Blue Heron and several Canada Geese, but no cranes. I scanned again. And again. I was just about resigned to failure when I noticed something white on the shore behind that small island with three trees that can just be made out at right center in the above photo. Moments later a Whooping Crane walked into view. It was a long way away, but there was no mistaking it. 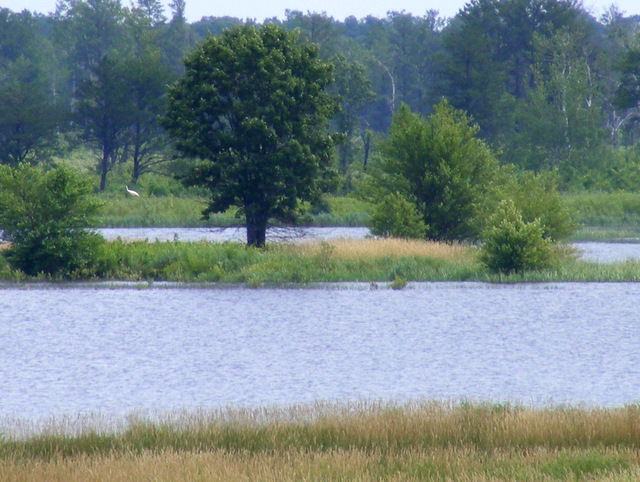 A second bird appeared to the right of the one in the photo. A few minutes later, they wandered back behind the trees. I scanned the entire marsh again and found two more. One was only in view for a second as it waded through tall grass. The other was feeding. Occasionally it would look up and show itself, but most of the time it was bent over and looked like this. 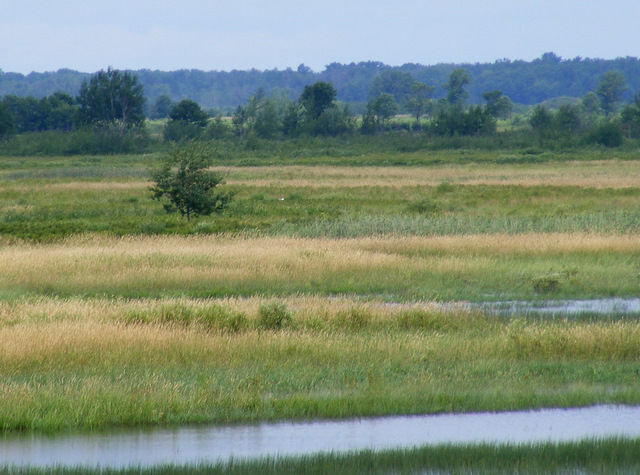 You see it, don’t you? It’s that tiny white spot to the right of the tree. And that was it. I would have enjoyed a better view, but where Whooping Cranes are concerned, I’ve learned to take my success in small doses. They were far away and they were uncountable but, for Pete’s sake, they were Whooping Cranes. If any one of about 1,000 things had happened at the wrong time in the past 70 years, they wouldn’t even exist. I’m thankful for the chance I had.