An article in the local newspaper, by Jen Wiant. 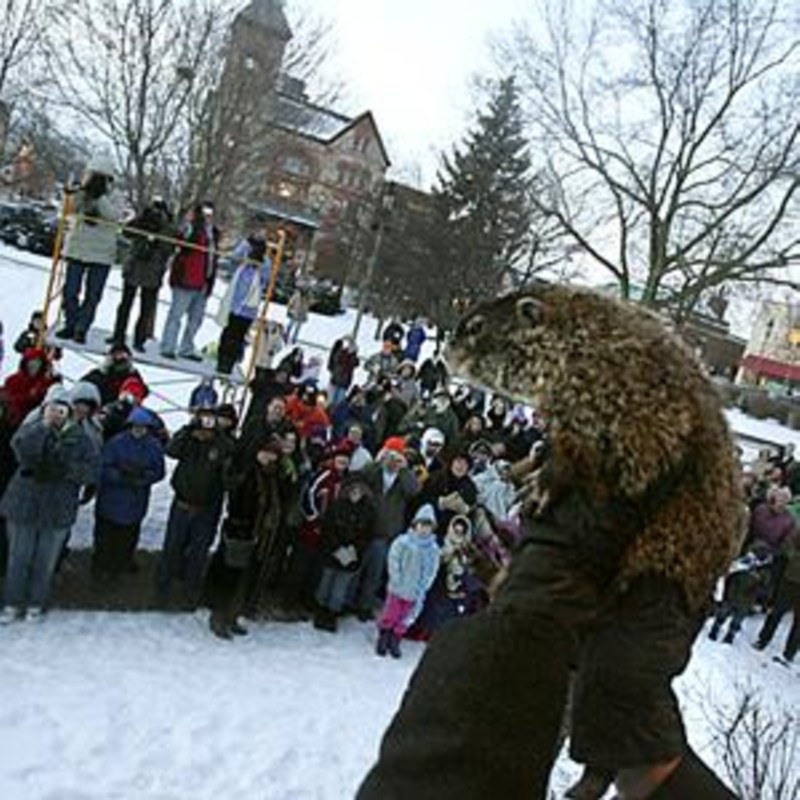 Woodstock Willie is held up to a crowd gathered in the Woodstock Square Friday morning at the annual Woodstock Groundhog Day event. He did not see his shadow, indicating an early Spring.

Woodstock Willie predicted that spring will come early this year.

The groundhog emerged from his stump on the Woodstock Square just after 7 a.m. Friday in front of a crowd of about 100 people who braved the 3-degree temperatures to see what he had to say. Woodstock Mayor Brian Sager put his ear next to the groundhog, listened for a few seconds and declared that Willie had definitely not seen his shadow this morning.

Third-grader Katy Holub, who came to see Woodstock Willie with her mother before going to school, said she was a little disappointed by the prediction. “I was hoping for a little more winter because I like to go ice skating,” she said.

Bonnie Strom and her husband, Stan Latos, of Woodstock, said Friday was the first time that they attended the early morning prognostication and breakfast. “I heard about it on the radio and thought it sounded like fun,” Strom said over breakfast in the old courthouse building on the Square, where a polka band entertained diners. “I will [be back next year] because I forgot my camera this time,” she said.

Sue Carolan has been to see Woodstock Willie every year since watching the filming of “Groundhog Day” on the Square 15 years ago, she said. “I was on maternity leave when it was filmed. Now, my son is turning 15,” she explained while waiting to get a picture of Willie to put in the scrapbook she had kept since 1992.

Despite the frigid temperature and early hour, those who turned out for the prognostication seemed to be in good spirits, including Sager. “It’s an interesting and joyful tradition we have in Woodstock,” he said.

This entry was posted in Movies, Pop Culture. Bookmark the permalink.