We woke up Monday to rain. It continued all through our waffle breakfast and our 45-minute drive to Zion National Park. As we passed through Springdale, we saw a sign that read, “Zion NP lots filled. Park in town.” This depressed me so much that I chose to ignore it—after all, none of the parking spaces in town were being used.

When we got to the gate and paid our $30, we were allowed in without hesitation. The visitor center lot was only half filled. (The same sign was lit up on Tuesday, when the park was more crowded, but we still had no trouble parking by the visitor center.)

Cars are only allowed on one road through the park. Everywhere else is only accessible by shuttle bus. We oriented ourselves, then climbed aboard. This was our view for much of the time we were in the park. 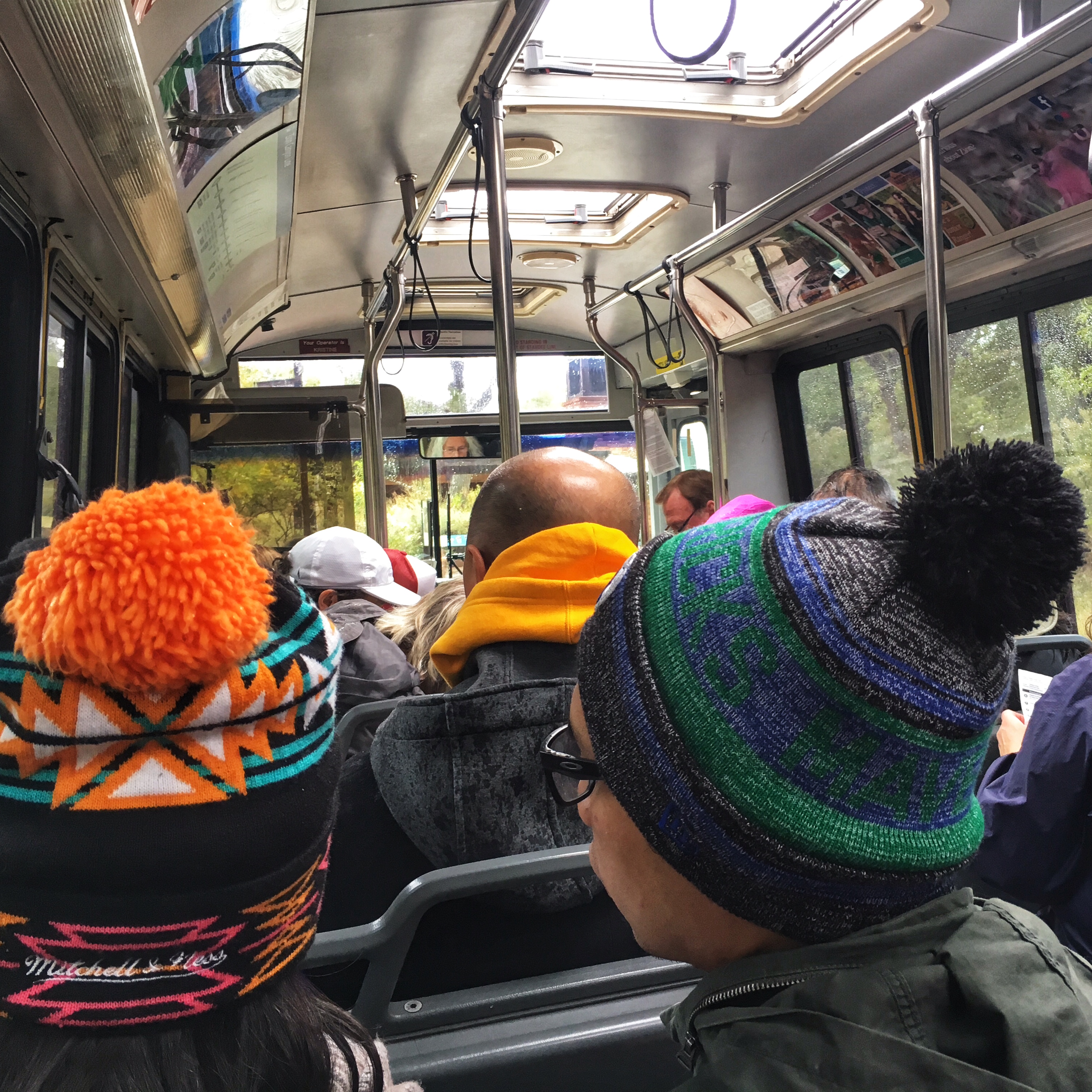 Or this (taken later in the day). 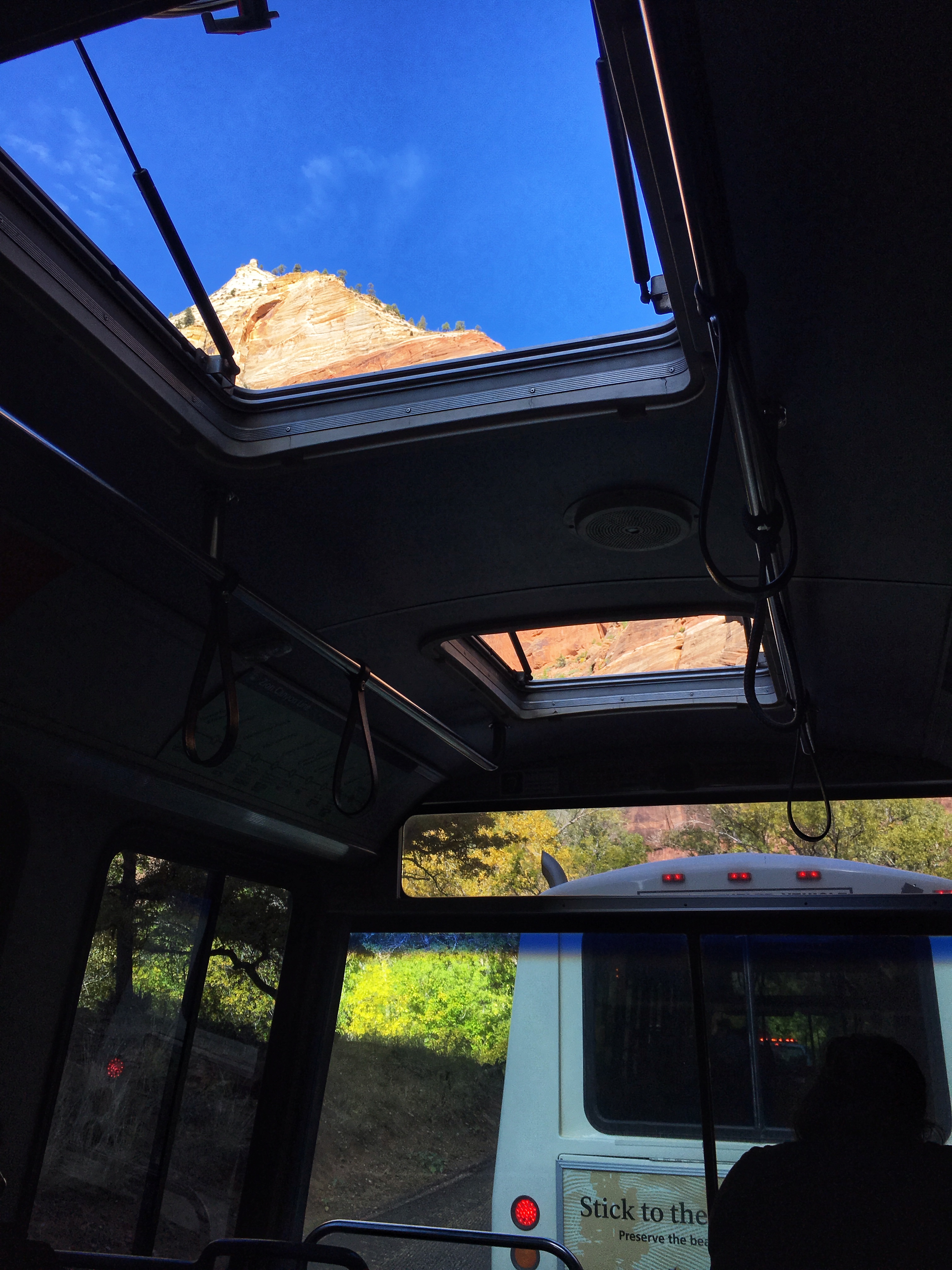 We got off at the museum, which turned out to be worthless. The peaks behind the building are known as the Virgins because the river that runs through the canyon is the Virgin River (named for an early explorer named Thomas Virgin).

Back on the bus to the Court of the Patriarchs. We got off at this stop for about half an hour, and it was my favorite time in the park. It was still drizzling, which was keeping a lot of people away. There was only a short trail to an overlook across the river from the peaks named Abraham, Isaac, Jacob, and Moroni (the angel that supposedly appeared to Joseph Smith—Utah is 61% Mormon). A flock of 12 Wild Turkeys foraged along the road. The clouds were moving down the canyon, wrapping around the cliffs. It reminded me of photos I’ve seen of Asian mountains. 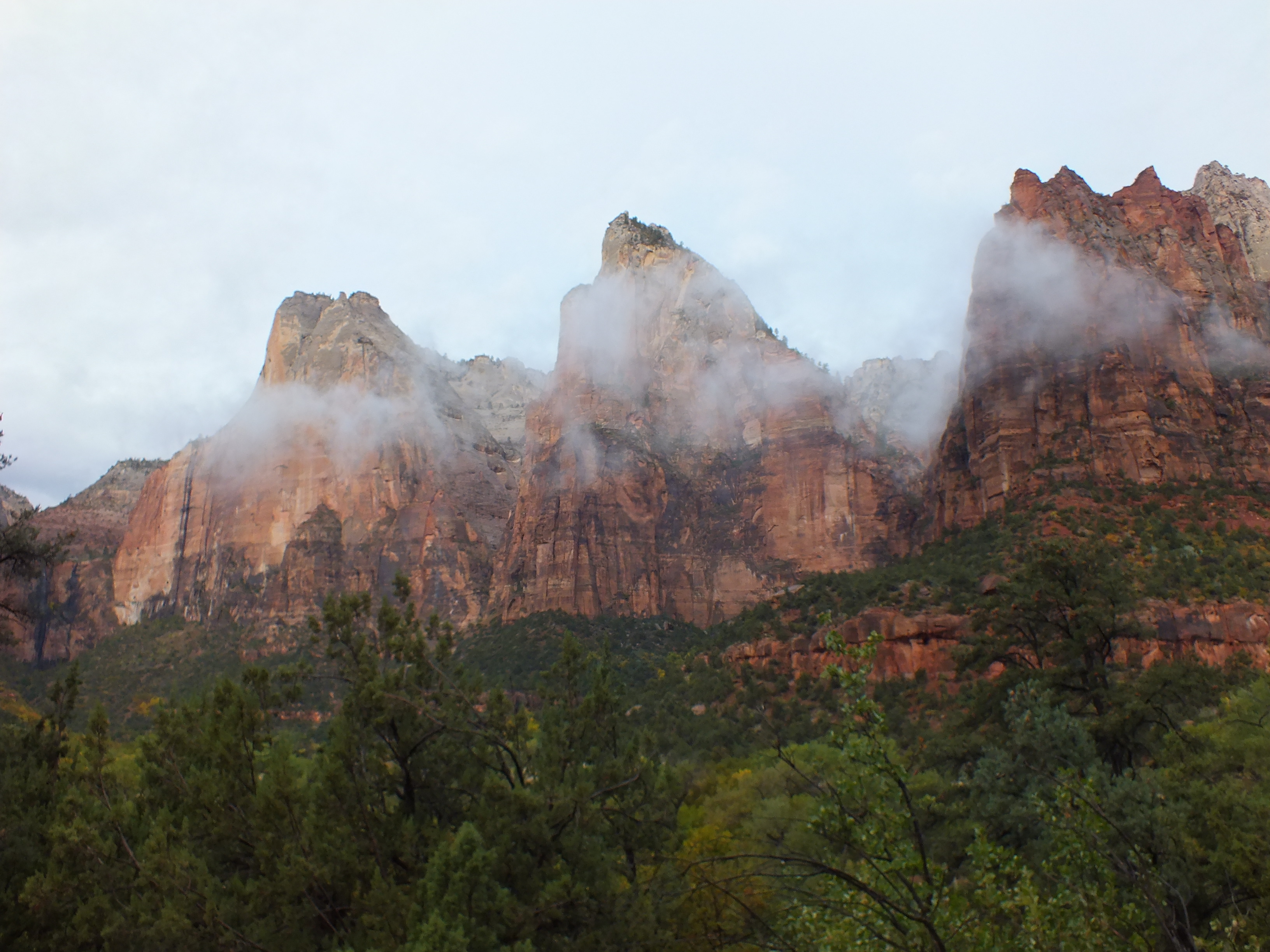 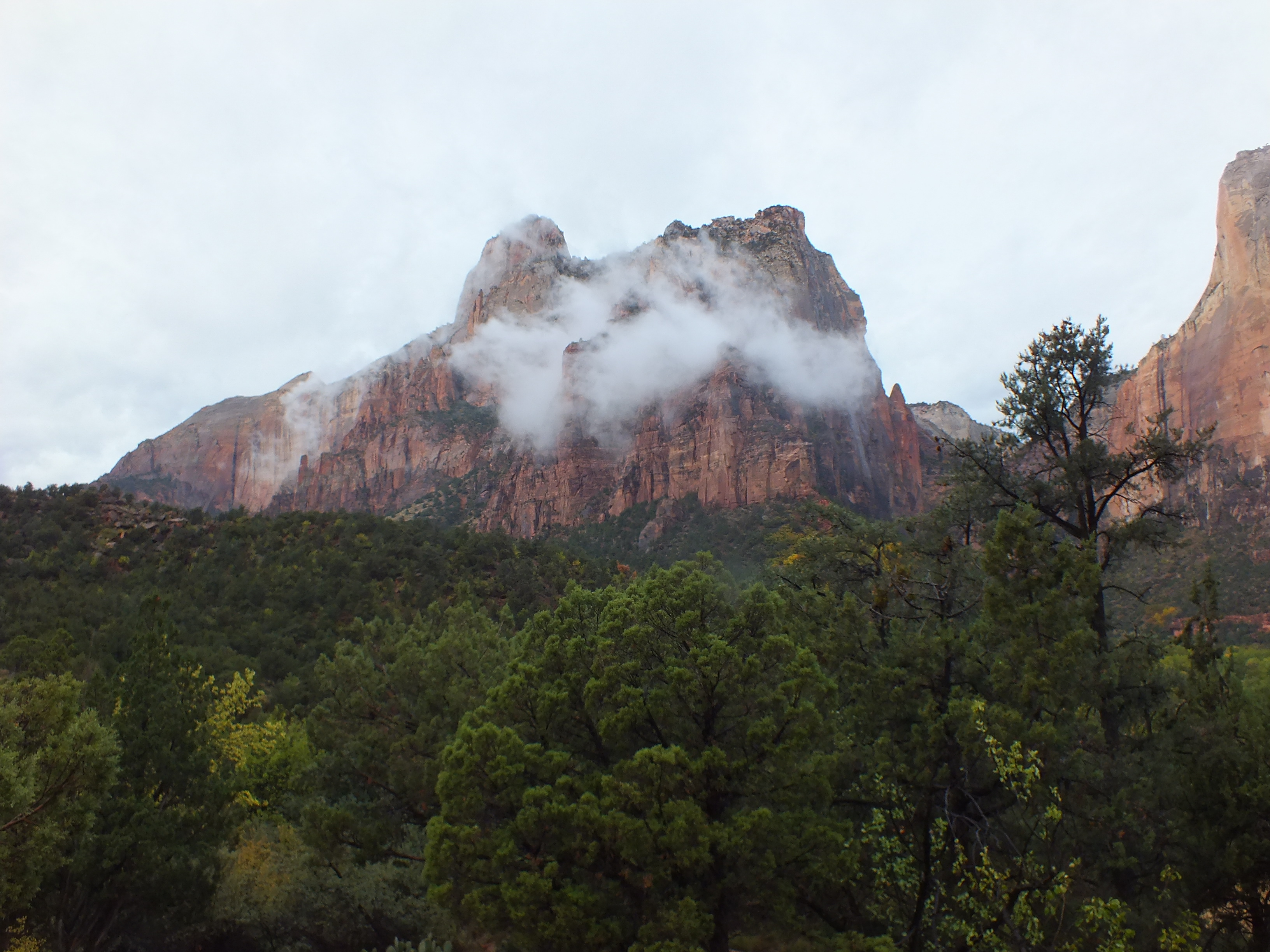 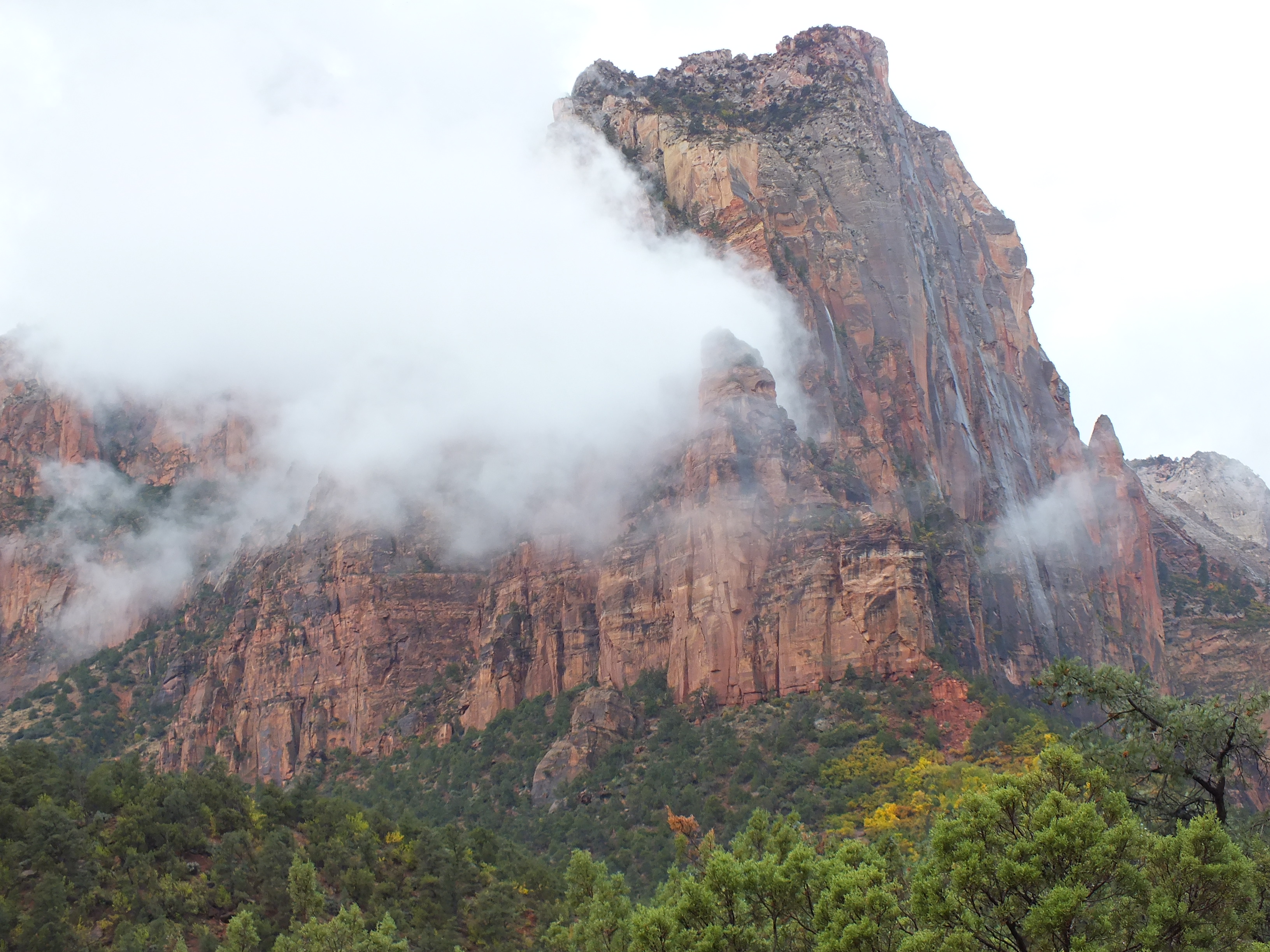 Instead of climbing on the next bus, we walked across the road and down by the river. 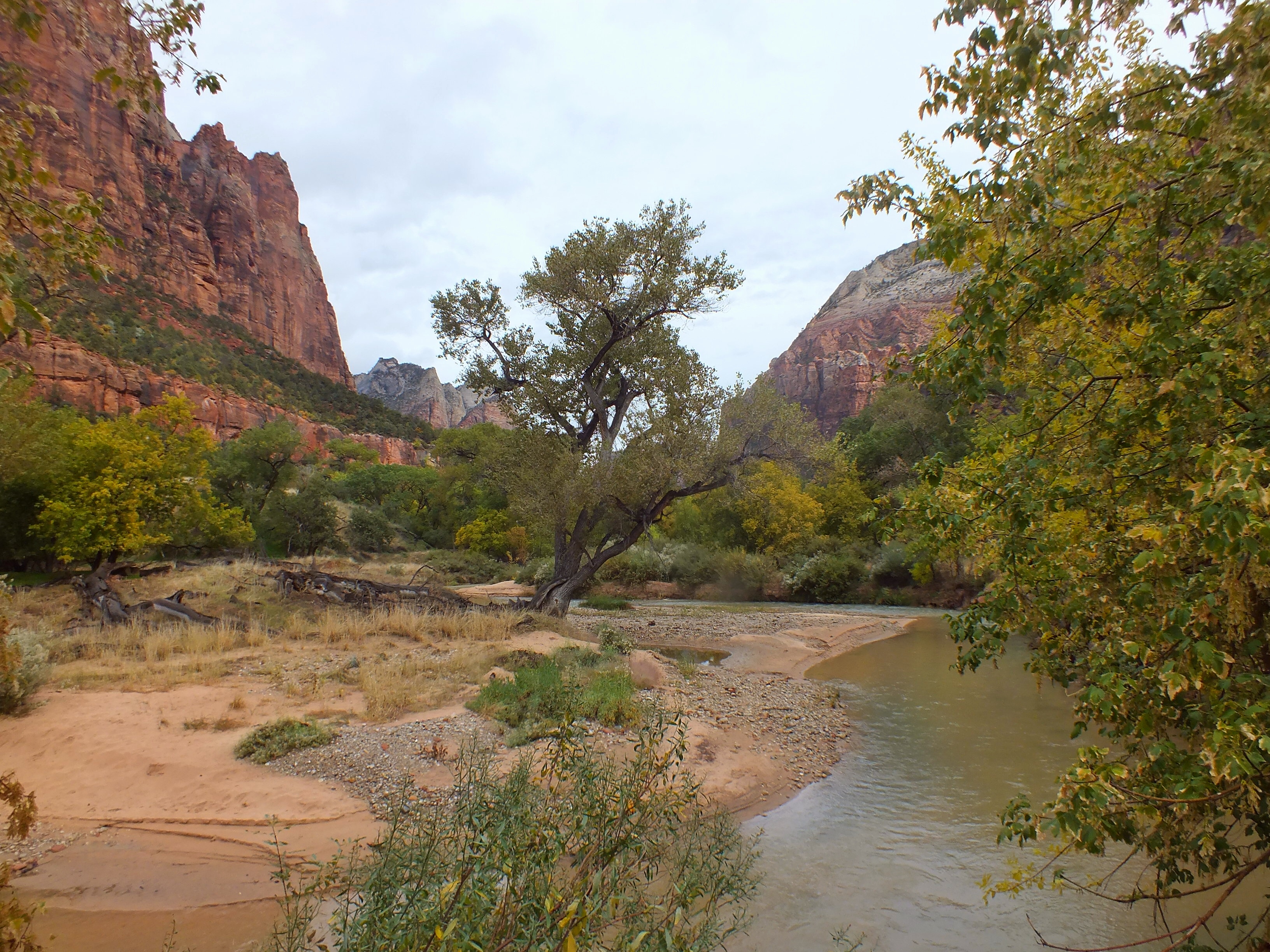 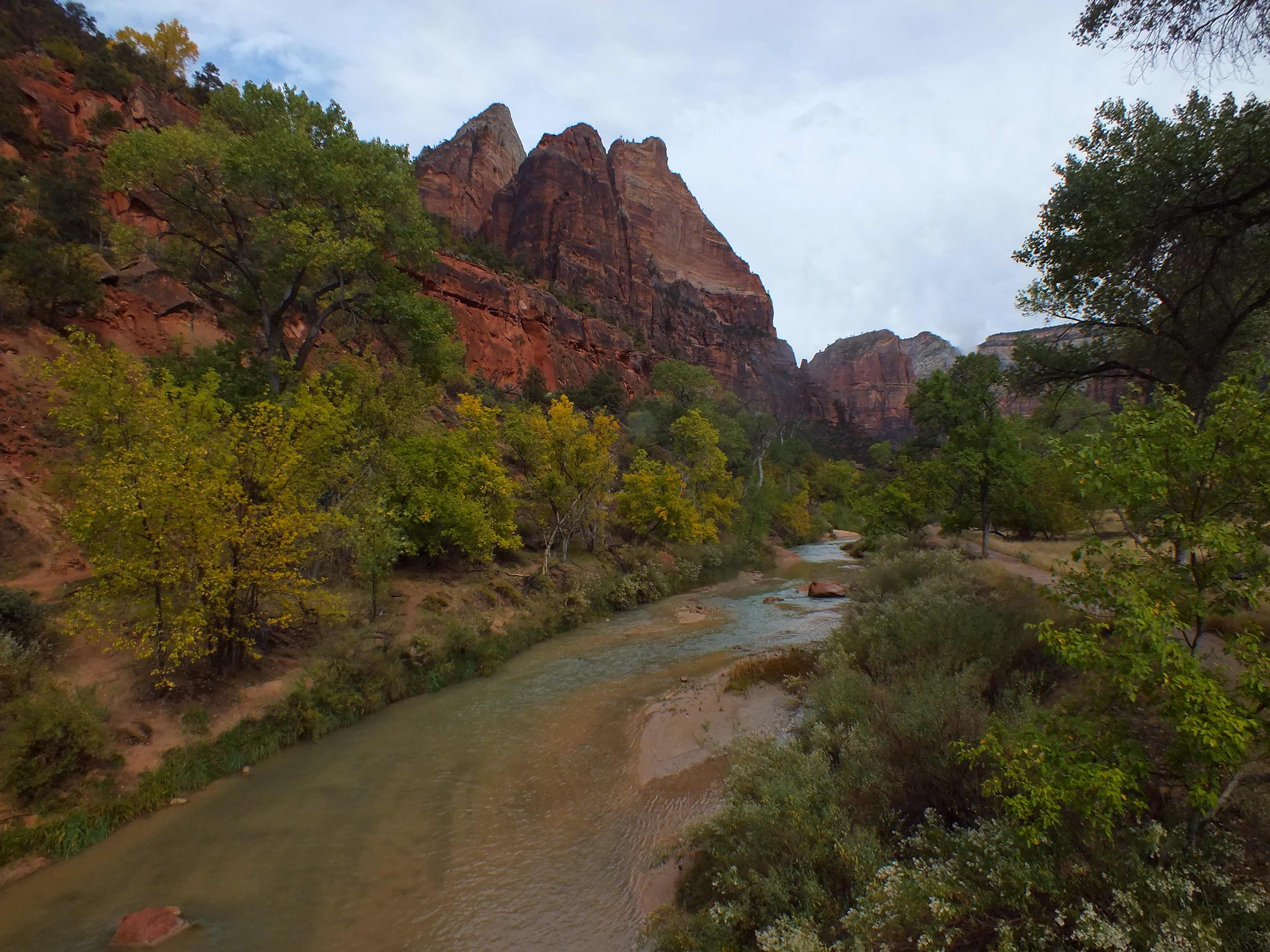 This was the only place in the park, and pretty much the only place on our entire trip, where I saw many birds. There were several Western Bluebirds (among other things), including this one. 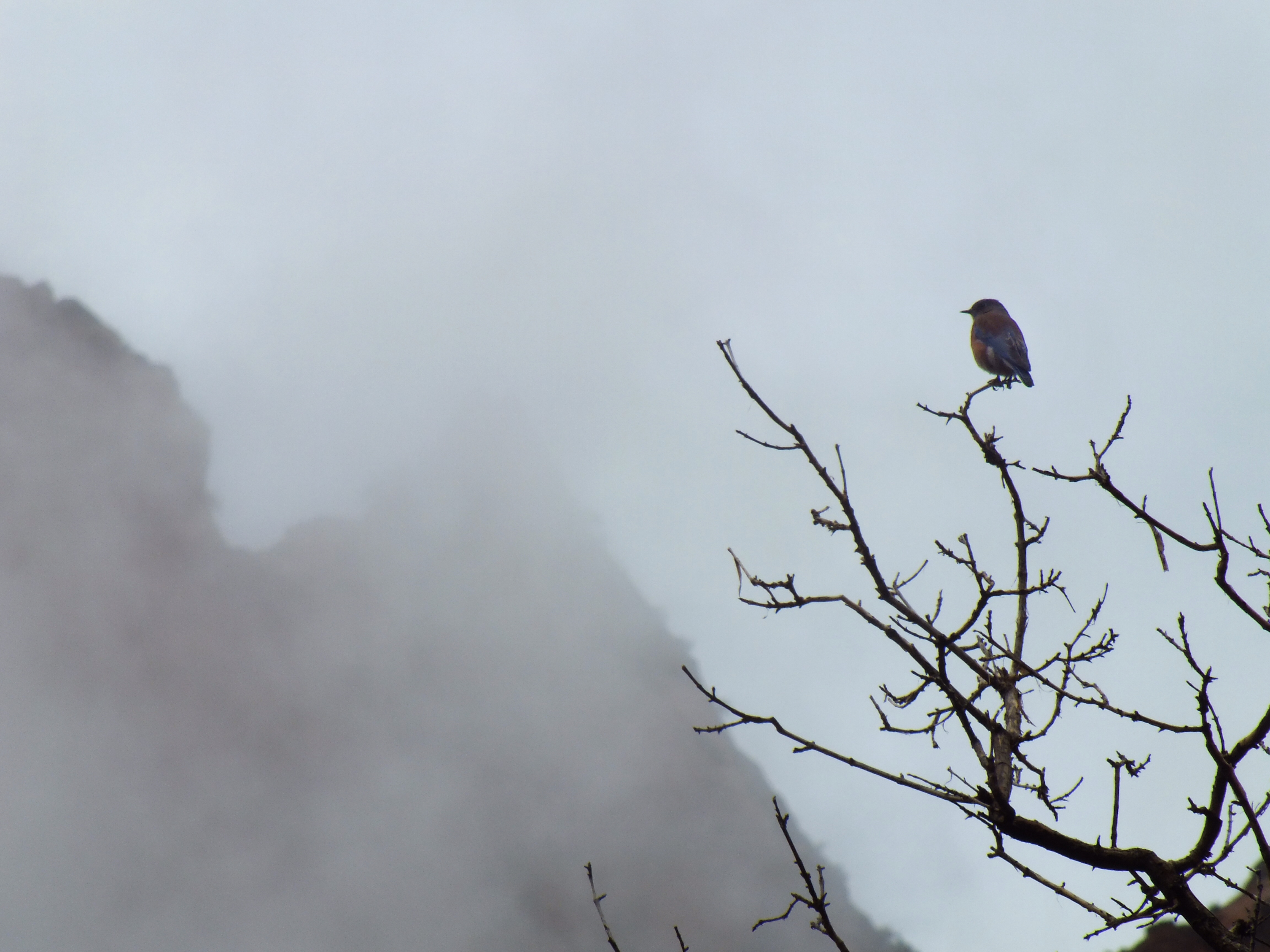 The next bus stop was the Zion Lodge. It was early, but we decided to beat whatever lunch crush there might be and eat in the grill in the lodge. My wife had a Navajo taco, which she said was delicious. I cannot for the life of me remember what I had, which means that it make no impression on me good or bad. Our waitress was a friendly young Navajo woman named Sam who asked us where we were from and where we were going. She grew up in Monument Valley and recommended a restaurant there where we could get authentic Navajo frybread. (We tried it a couple days later and were unimpressed. More on that in a future post.)

It continued raining as we ate but cleared up about the time we left the building. We hiked to the Lower Emerald Pool, about a mile round-trip. 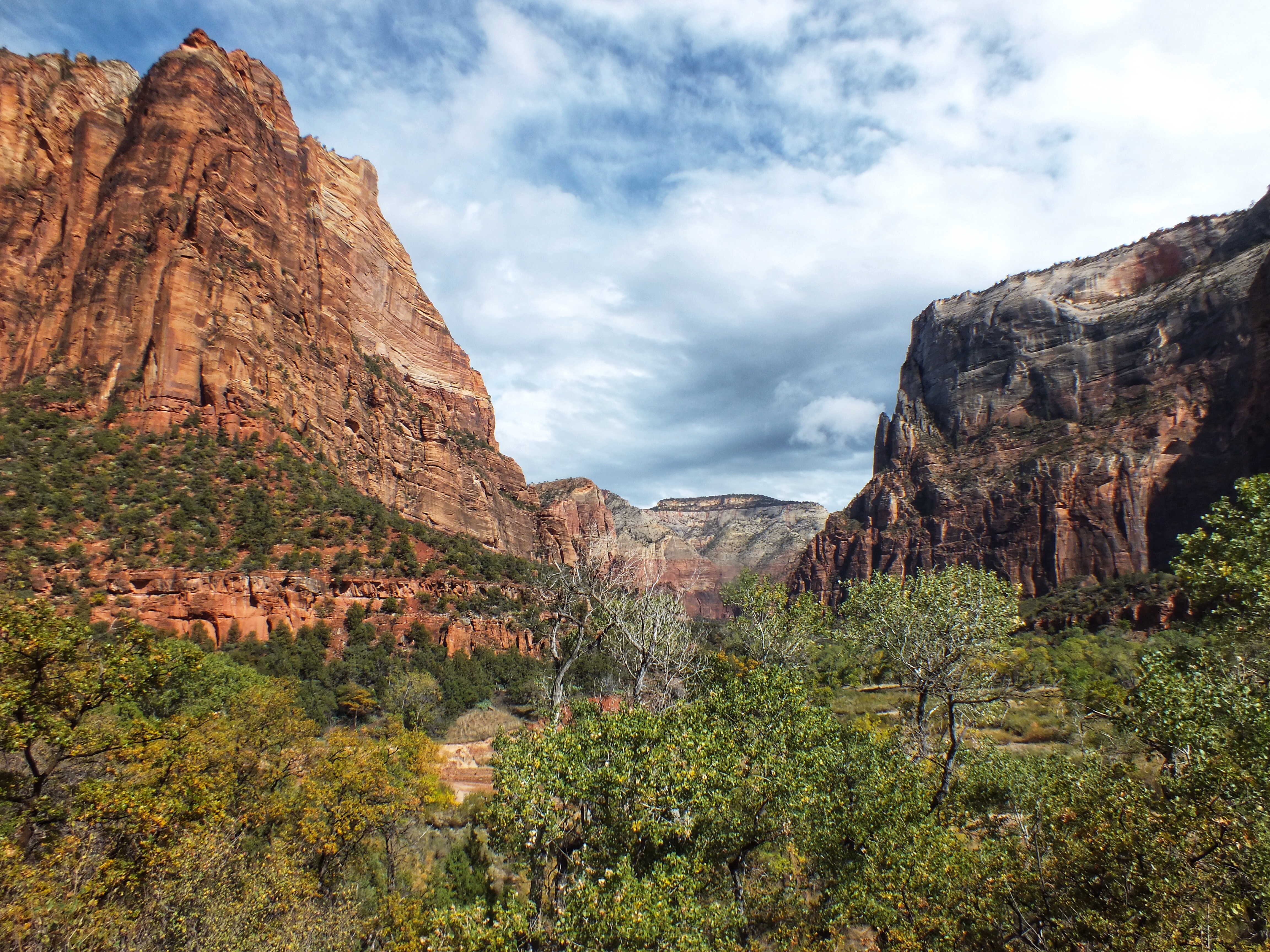 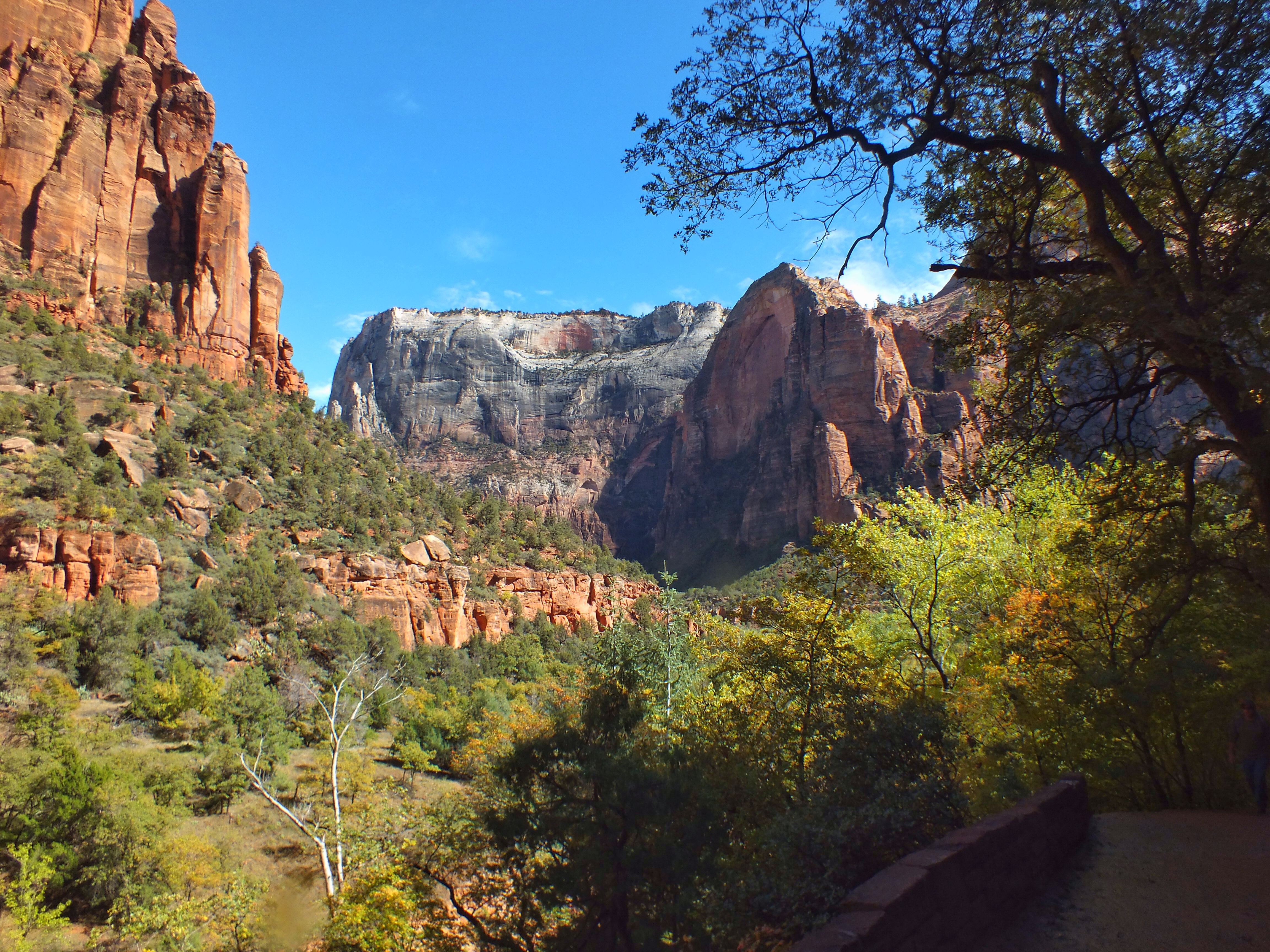 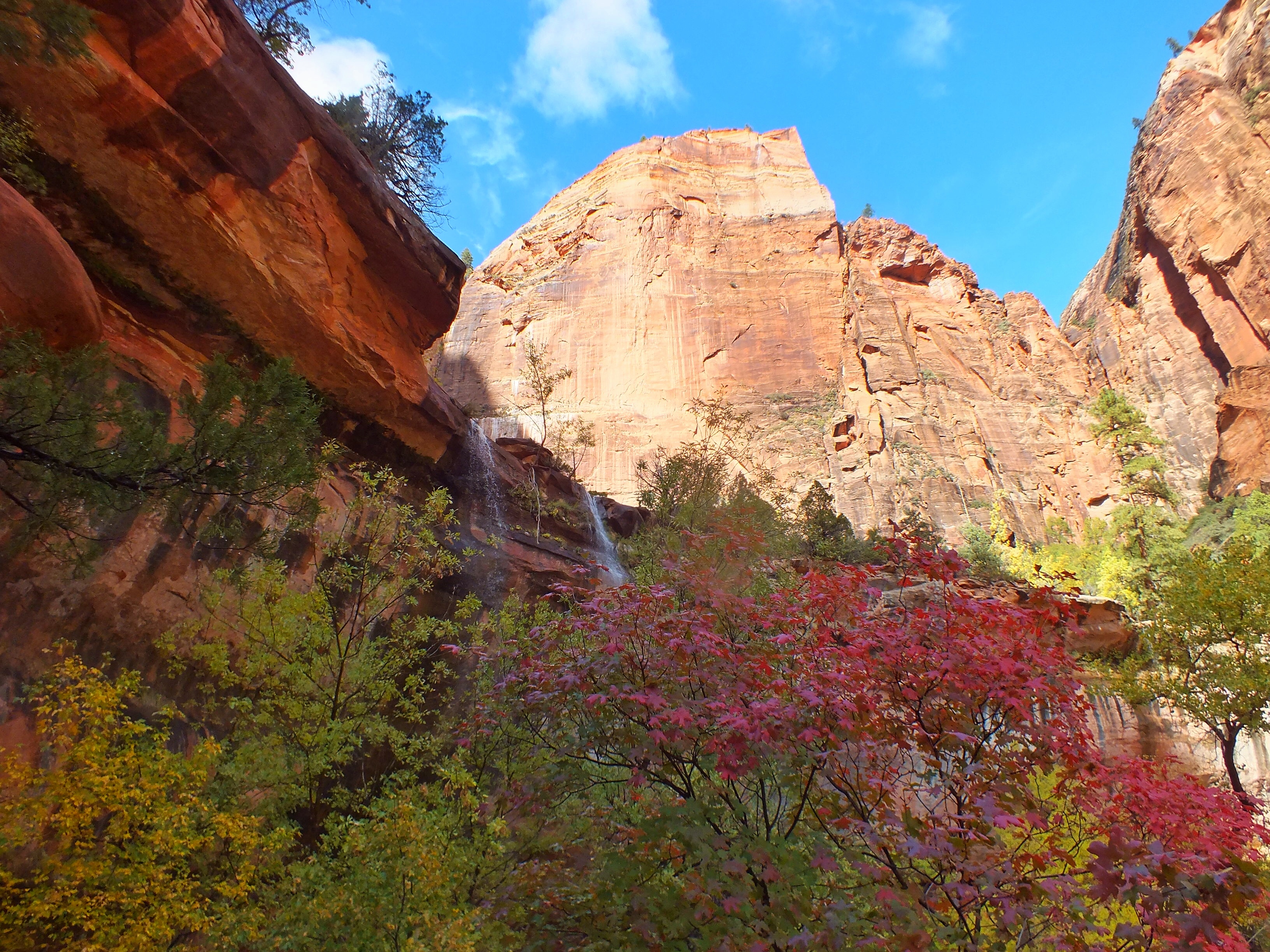 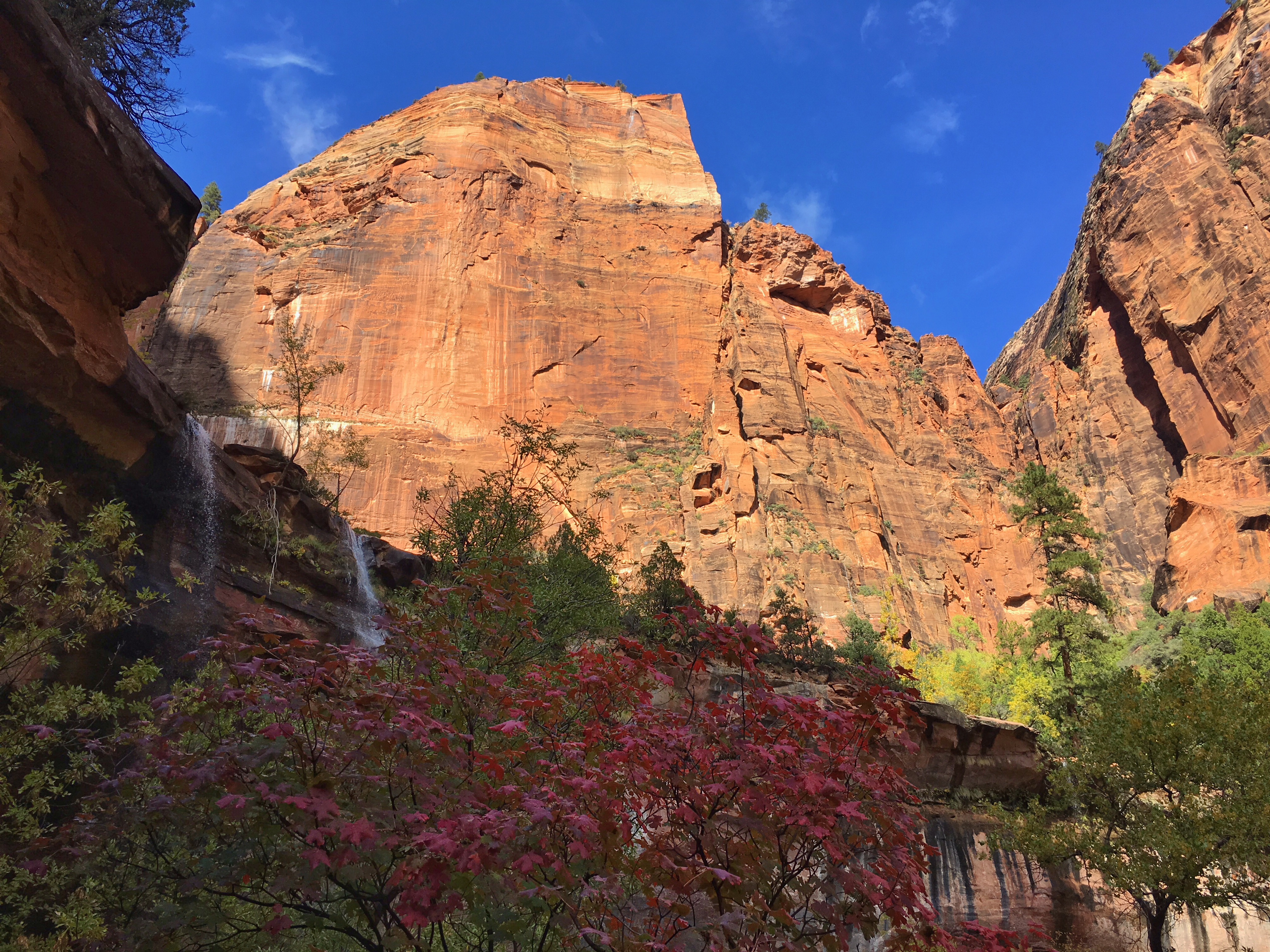 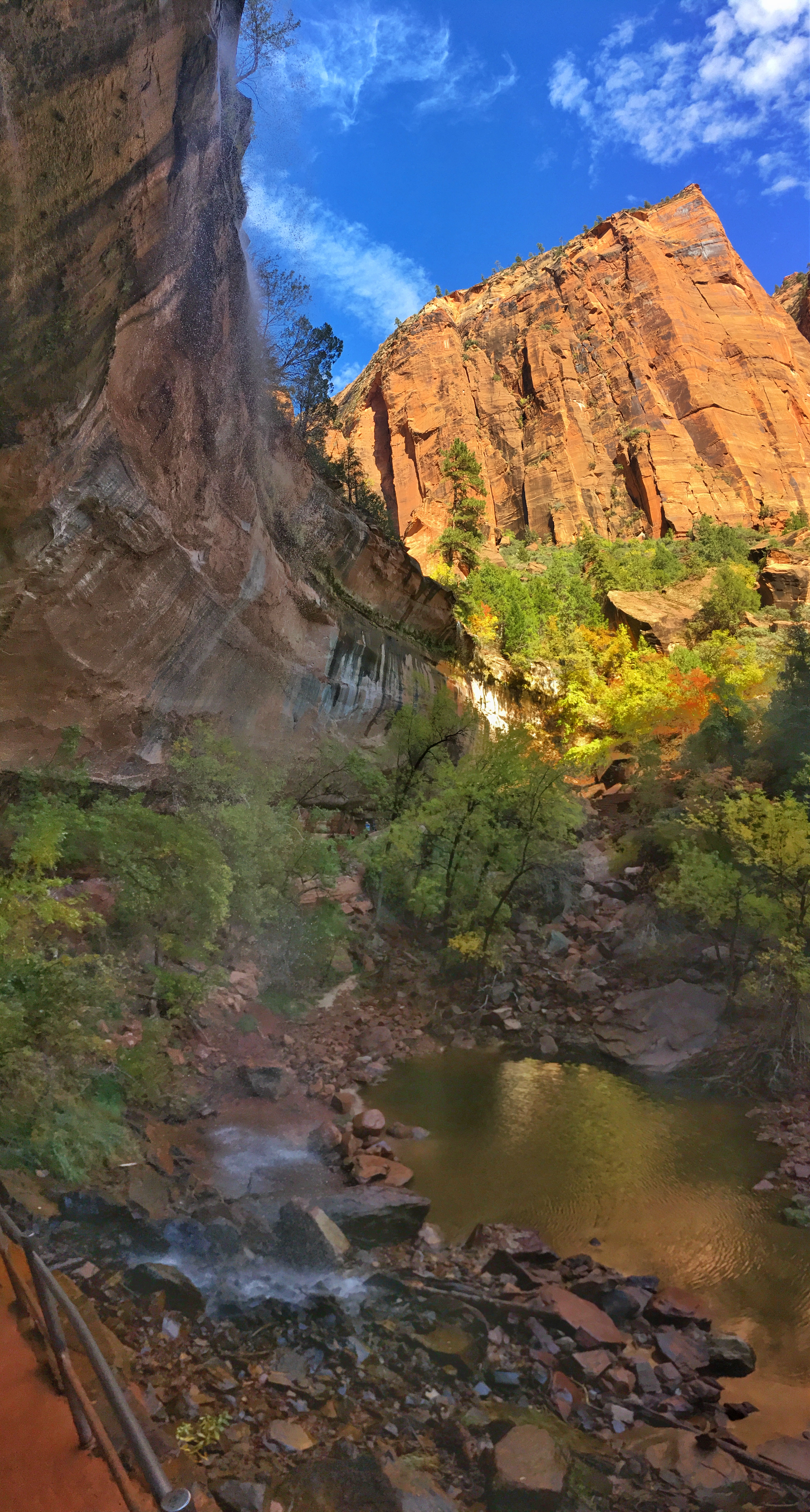 This hike became funny, but not in a good way. Many of our fellow-hikers were from other countries where they, apparently, have different customs regarding behavior in crowds. Several times we were run off the trail by groups who took up the entire width and refused to give ground, even when we did our part and got as far to the right as we could. These hikers would look me right in the face and keep coming. I had to choice to either step off the trail or run smack head-on into them.

And when we got to the falls, I experienced another odd behavior. There were certain spots that were best for taking photos. I’d wait for others to get their shots, then step up to take my pictures—only to have someone step immediately in front of me and my camera to get their shot. It became so frequent and obvious that we just began laughing about it

When we were done with that trail, we got on the bus and rode to the Big Bend stop. Crews were working on the road at that end of the park, so the bus ride was long and slow. When we got there, I walked a short trail down to the river. I soon found myself on a shelf of mud and rock with no other people anywhere around. I stayed about 15 minutes and soaked up the view. It may have been the most beautiful spot I’ve ever been in, although my photos don’t begin to capture it. 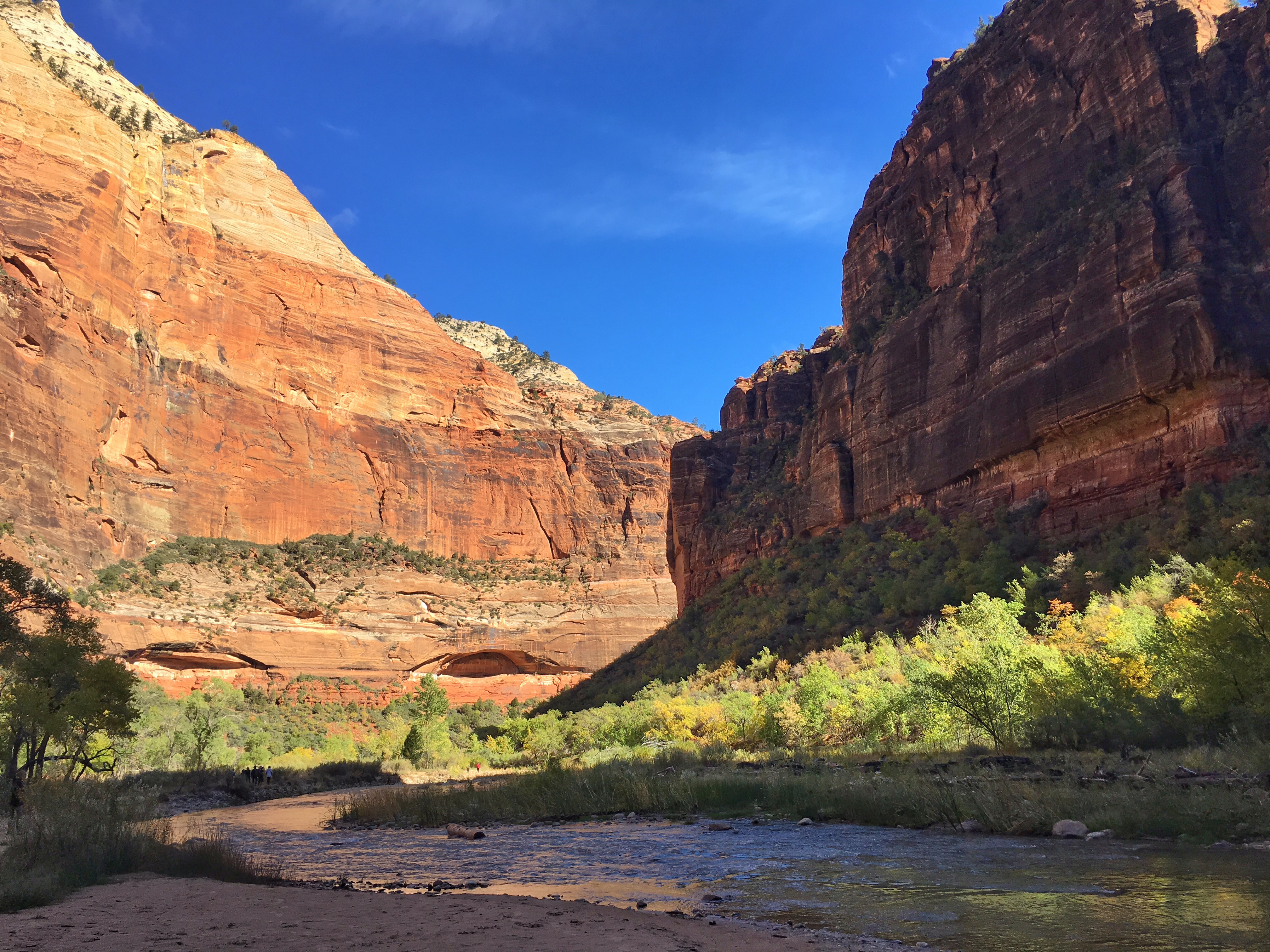 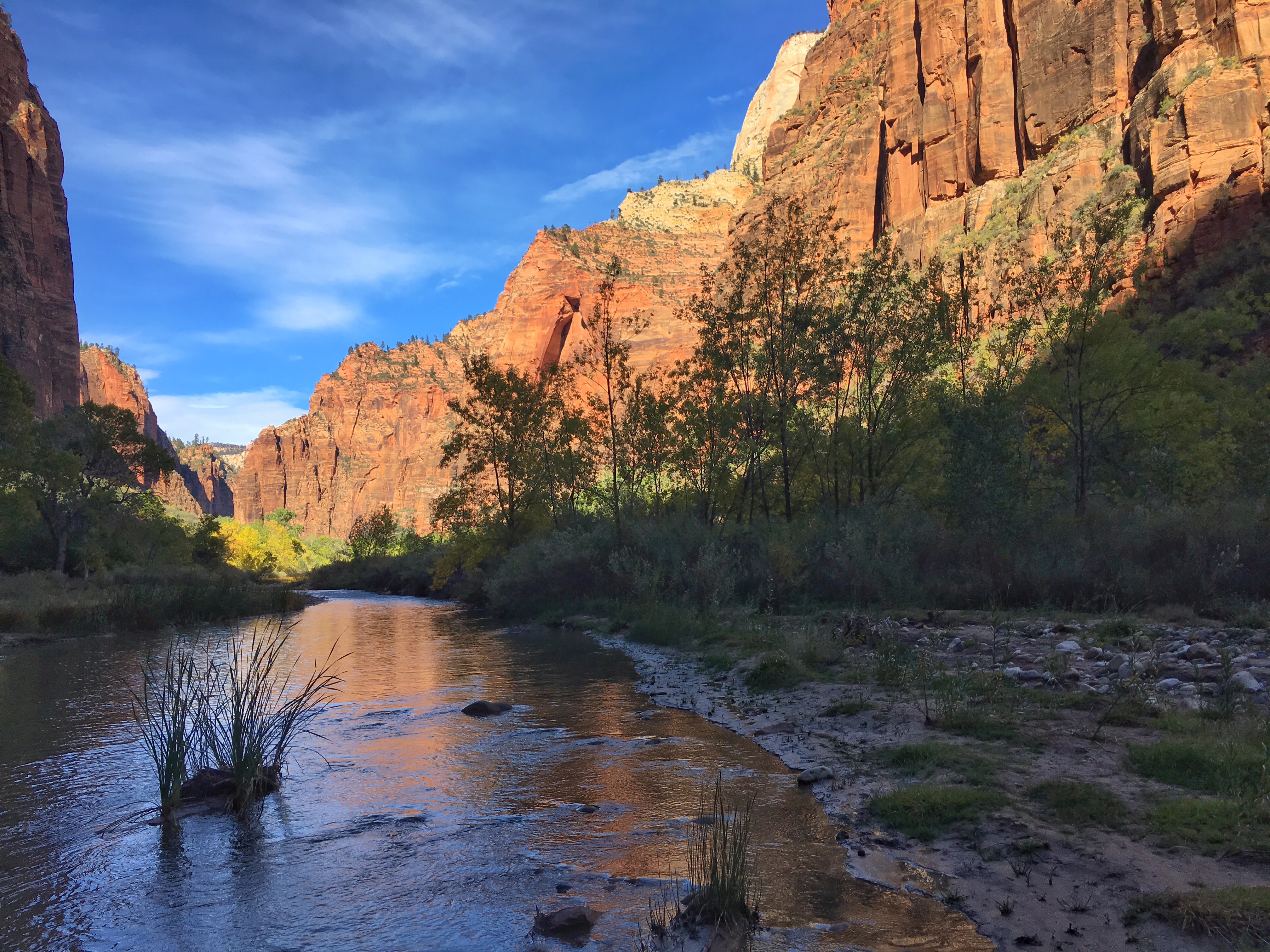 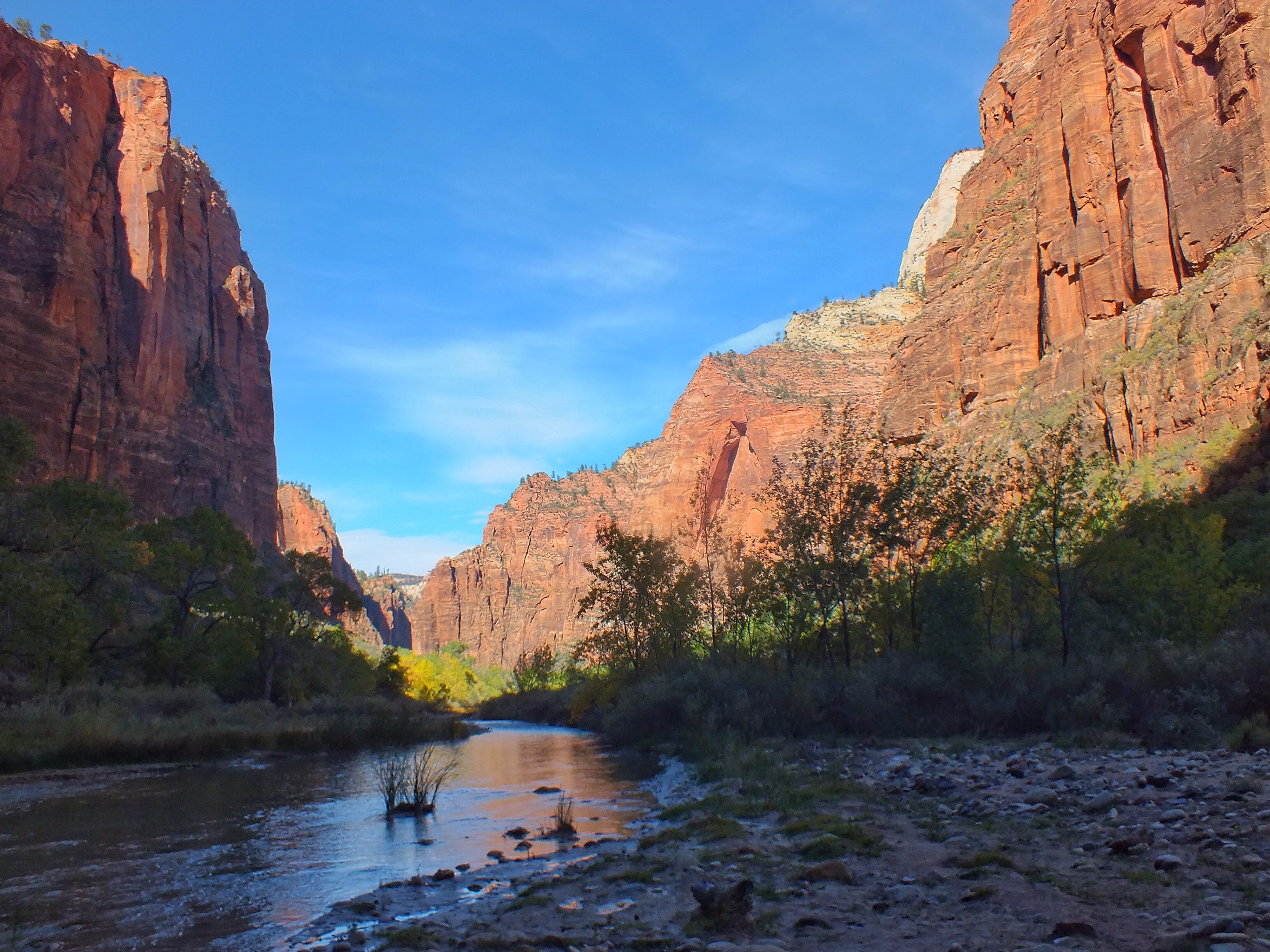 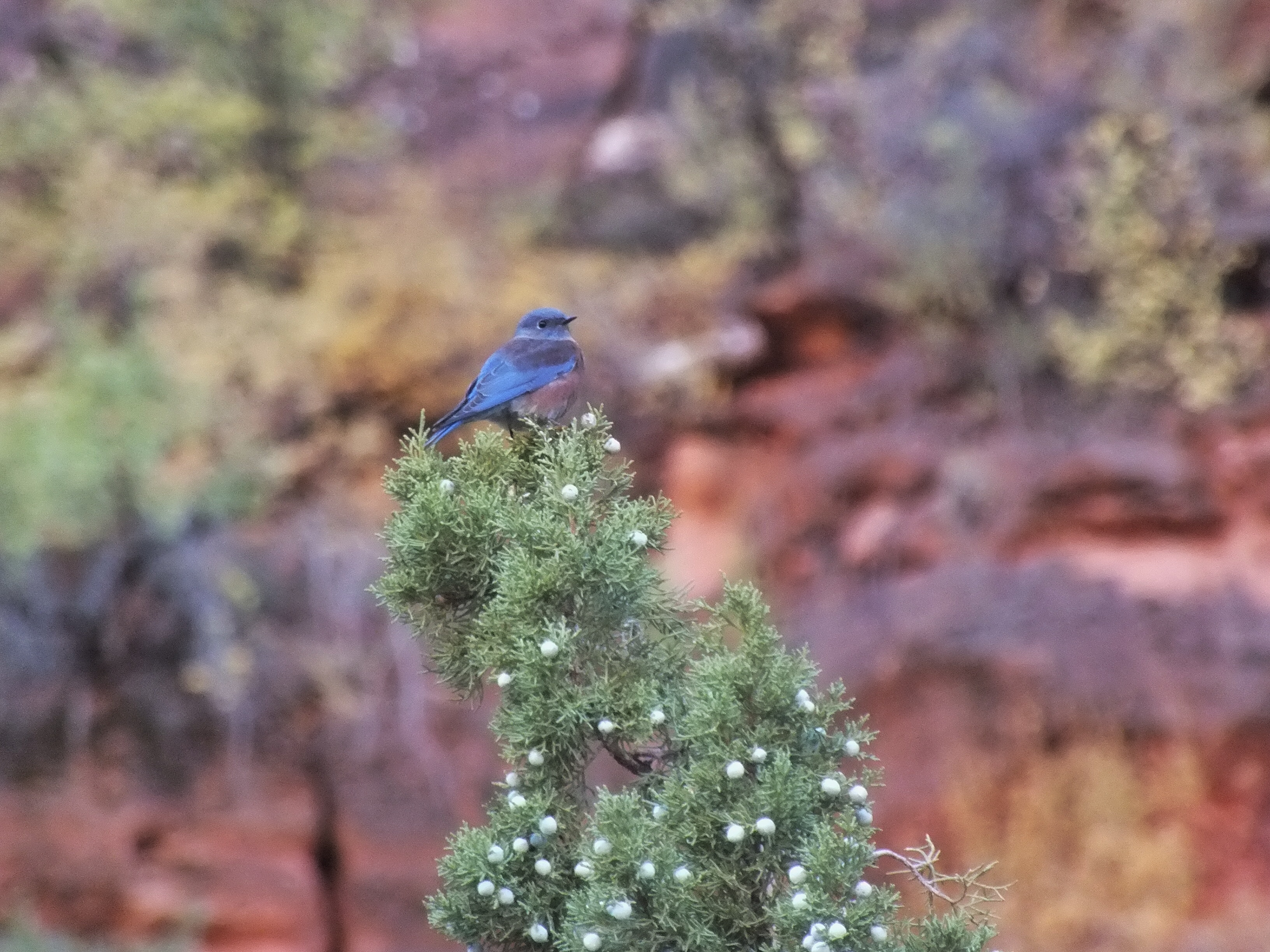 We endured the long ride back to the visitor center. Since the rain had stopped, tons of people had materialized. That, plus the road work, made for a somewhat-irritating end to an otherwise great day.

I can’t remember what we did for supper, but I know we had a long stretch to spend in the hotel that night. Neither chair in our room was comfortable, but one was much less comfortable than the other. We took turns getting numb-butt in the lousy chair.