Adventures on a Sunday Afternoon

I drove back roads south into Wyoming and stopped in Sheridan. In preparation for a long stretch of driving, I bought a drink at the same Qdoba where I’d bought supper the night before. Once I cleared Buffalo, about 35 miles south of Sheridan, there were no services until Casper, 112 miles away.

I-25 wasn’t busy. There were stretches of half an hour or so when I neither passed or was passed by another vehicle. I was relaxed and looking for Pronghorns along the highway. It occurred to me that I have undoubtedly seen more cows than any other animal. But I got to thinking about wild animals. I have probably seen the most White-tailed Deer, but after living in the west the past three years, I’m guessing Pronghorns are a close second. I was seeing individuals and and herds almost every mile.

I was looking at a herd of Pronghorns on the east side of the highway. I looked up in time to see a doe Mule Deer strolling casually across the pavement in front of me. Deer aren’t usually active in the heat of the afternoon, so I wasn’t anticipating it. I had just enough time to swerve around behind it at 80 mph. It never quickened its pace. I probably missed it by four or five feet. Aloud I said, “That would have been a stupid way to die.”

My original plan was to spend the night in Casper, but I decided at some point to continue south another 45 minutes to Douglas where I’d noticed on my trip north that there was a Hampton Inn. But there was a restaurant in Casper I had been planning on visiting, and that was still in the cards.

The place was called Sanford’s Grub and Pub. It was most famous for its decor. 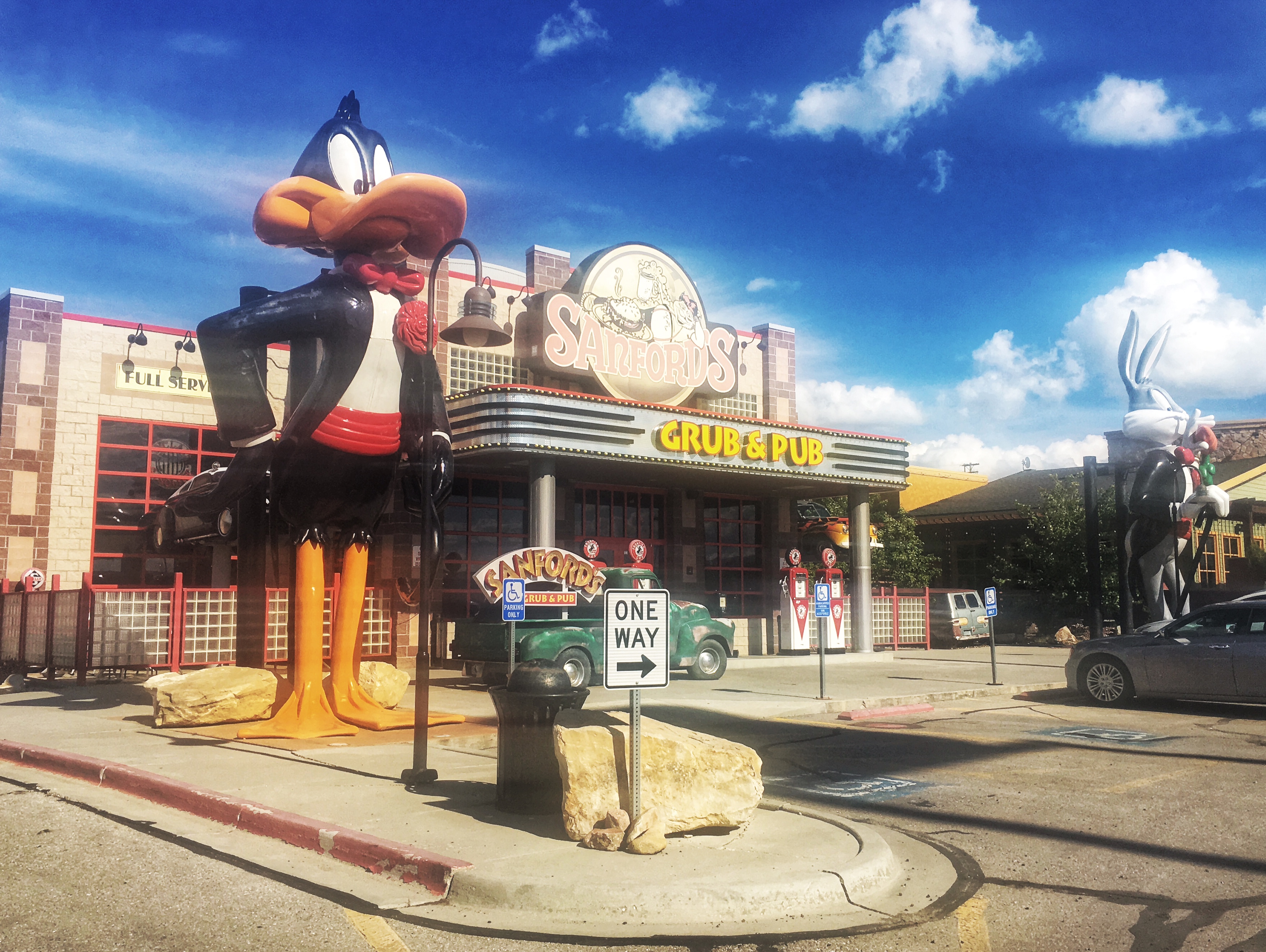 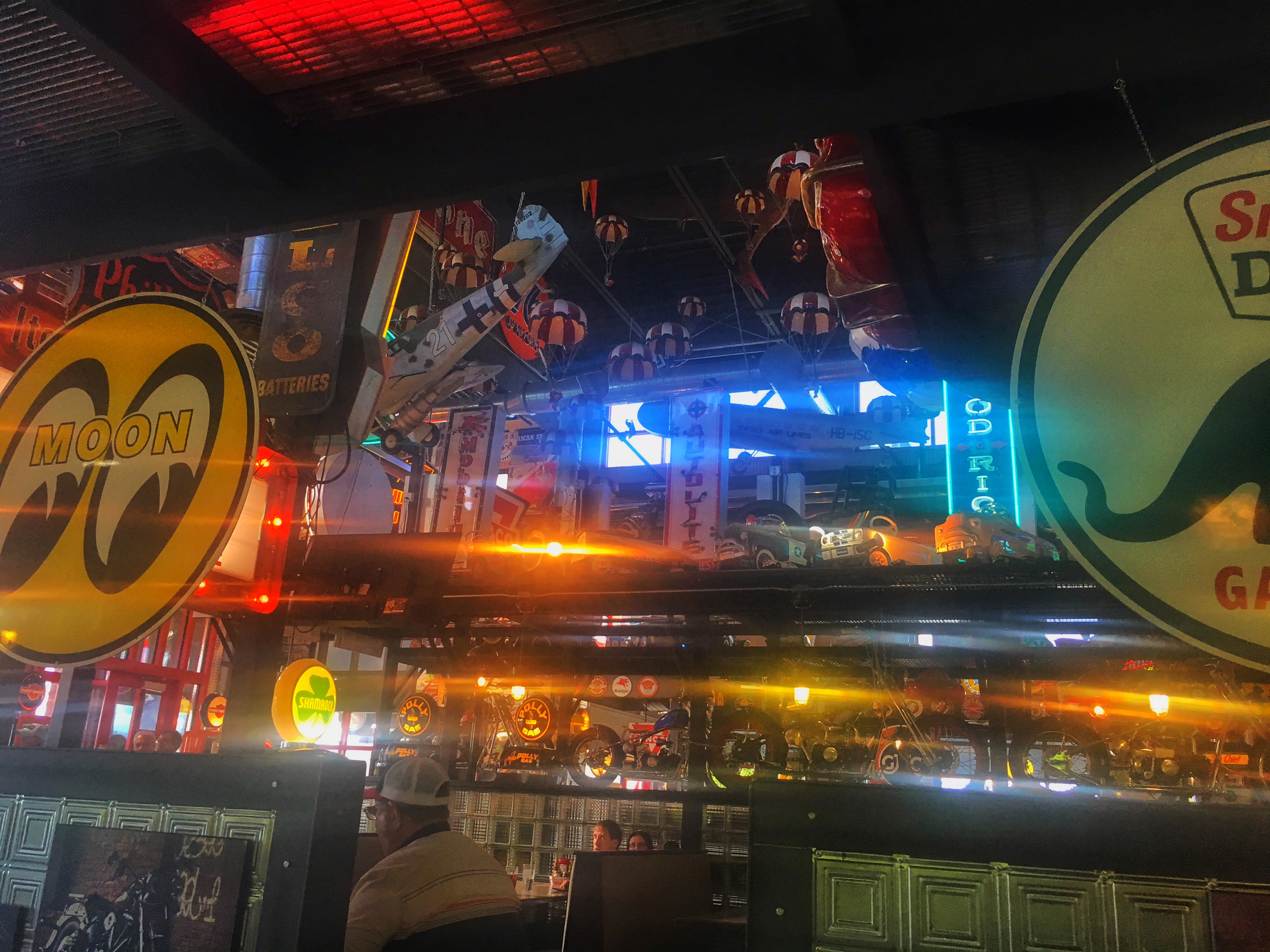 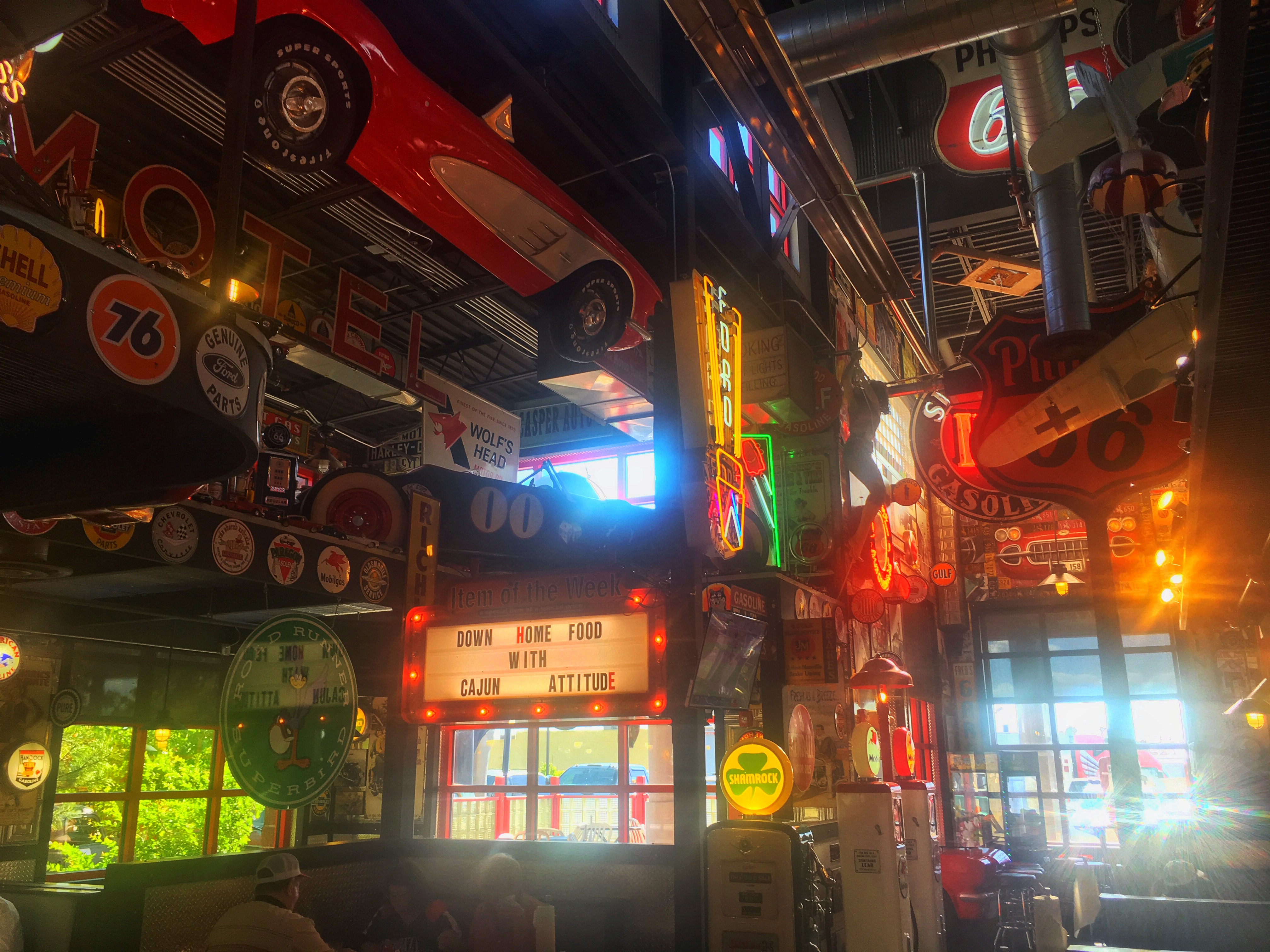 A friendly young woman took my order—a medium cheeseburger and onion rings. I waited and waited. And waited. After an hour, I was pretty irritated. The people who were seated just before me were also complaining. The people who came just after me were so upset that they announced that they were leaving. Their food magically appeared moments later. My burger finally came a hour and 20 minutes after I ordered. And it was decidedly well done. The server was very apologetic and offered to make me another one, but I told her I didn’t have another hour and a half to wait. To my surprise, the burger was pretty tasty, as were the rings.

When I finally escaped, I decided to get gas at the Pilot station next door. As I was pumping gas, I got a notice from my bank asking if I had charged $151 worth of gas and automotive at that same station. I hadn’t of course. Some clown in another car was skimming my card as I pumped gas. I got back on the road and chatted back and forth with my wife about it for a while, then pulled off and called Visa. They guy I spoke with was helpful, although he was very difficult to understand. The charge was erased, but I decided I wasn’t a big fan of Casper.

I got a room at the Hampton Inn in Douglas, but it was expensive—$150 plus taxes. I spent the evening logging my bird lists from the trip and planning Monday’s adventure.

This entry was posted in Food, Road Trips. Bookmark the permalink.