The Army campaign of 1876 was intended to move the Indian tribes of the northern plains onto reservations. Unwilling to go, the Indians had banded together into a force of about 1,500-2,000 warriors. The Army’s strategy involved an encirclement of the Indian camp by three columns: Gibbon from the west, Terry (including Custer and his men) from the east, and Crook, with the largest column, from the south. Crook left Fort Fetterman on May 29.

On June 11, Crook’s army stopped to rest along Rosebud Creek. The Indian scouts who were employed by the Army raced into camp chased by hostile Indians. For the next two or three hours, soldiers and Indians maneuvered, taking advantage of any opportunity to attack weak spots. There weren’t really lines of battle. The soldiers looked for any substantial group of warriors to fight while the Indians moved around and fought from every direction.

Crook had been misinformed and thought there was a large Indian village nearby. He sent eight companies of cavalry to attack it. The Indians thought the Army was retreating and left the field. Crook had expended so much ammunition and supplies that he felt that he had to return to Fort Fetterman to resupply. That meant that he wasn’t able to meet up with the other columns, which may have been a significant factor in Custer’s defeat seven days later and about 30 miles to the northwest. Crook had 10 men killed and 21 wounded at the Rosebud, and it’s estimated that Indian casualties were about the same.

I drove though the beautiful Montana countryside to the battlefield, located on a dirt road a long way from anything resembling a town. There were a few other people at the entrance but once I headed further into the park, I only saw one moving car and one parked car and nobody else on foot. 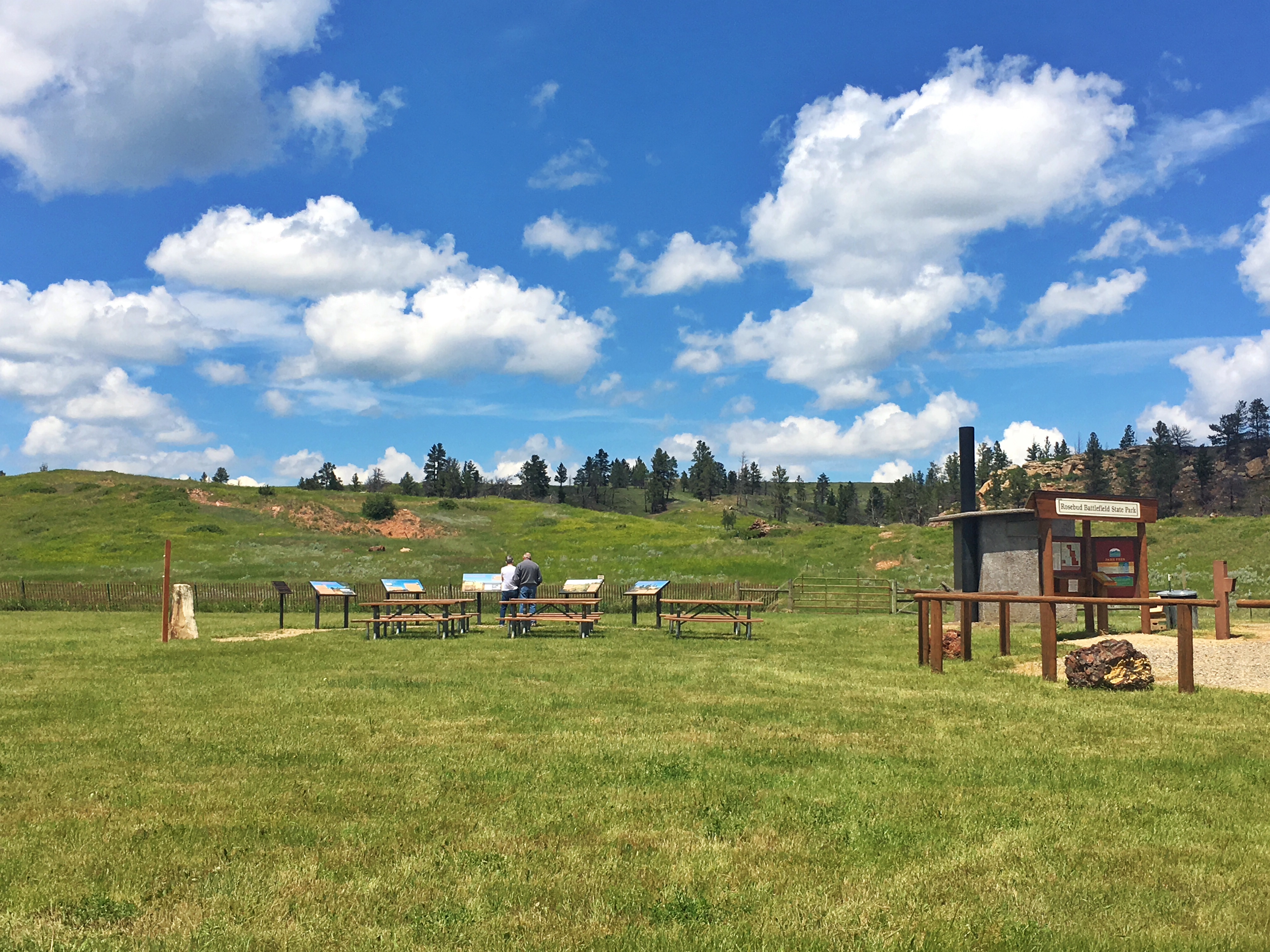 The tour road was two dirt tracks divided by tall grass. My Honda Accord scraped the grass the entire time, but the road was otherwise in good shape and I had no problem.

Because of the fluid nature of the battle, there weren’t really battle-related things to see. A few sight posts were scattered about with holes through which I could look to see particular landmarks. The Indian name for the battle is “Where the Sister Saved Her Brother,” named for an incident that happened during the day. A Cheyenne warrior had his horse killed under him. He became a target for the soldiers until his sister, Buffalo Calf Road Woman, rode up on her horse and carried him to safety. 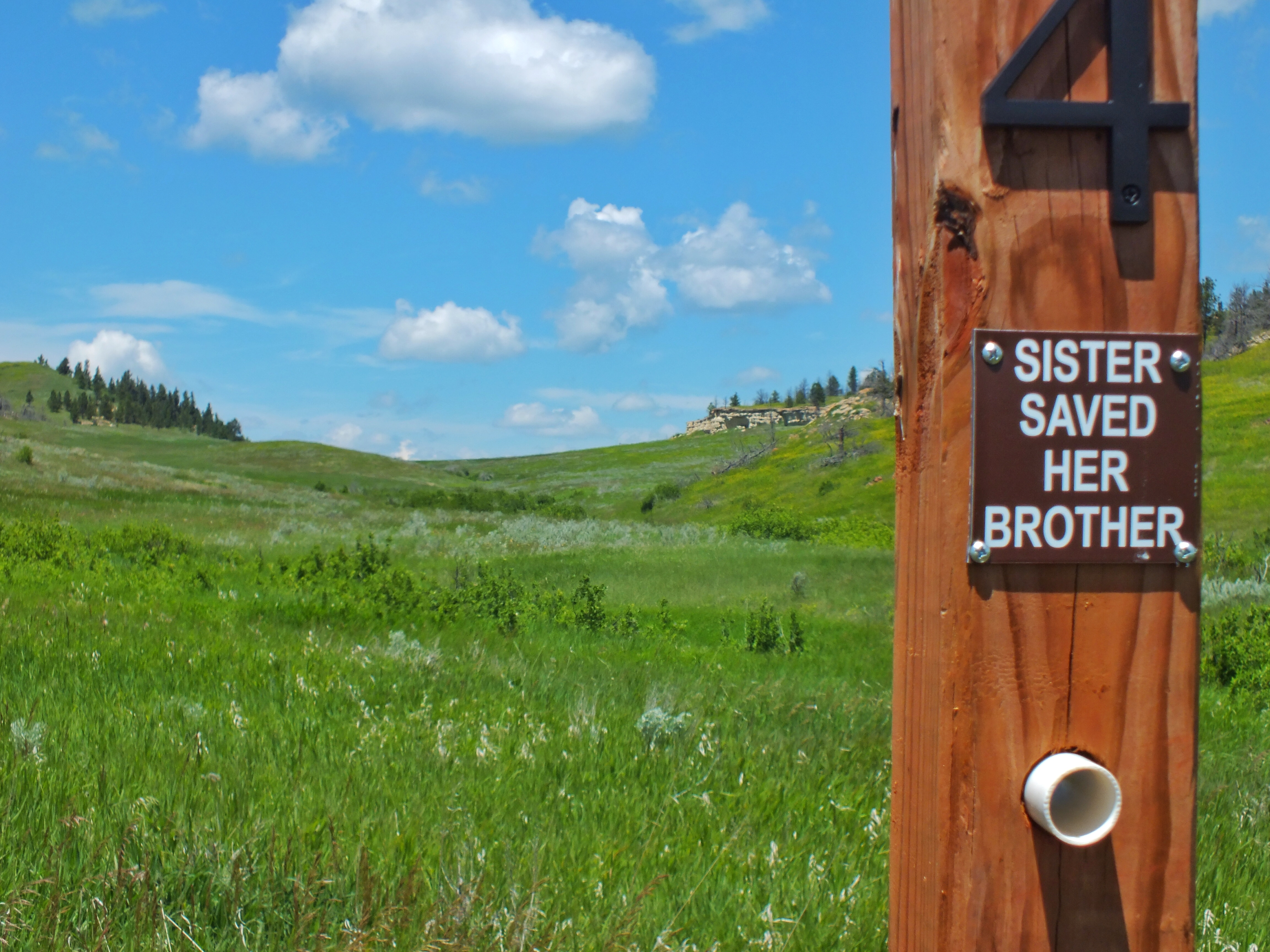 At the beginning of the road, I saw a female Pronghorn and her calf running away from me. 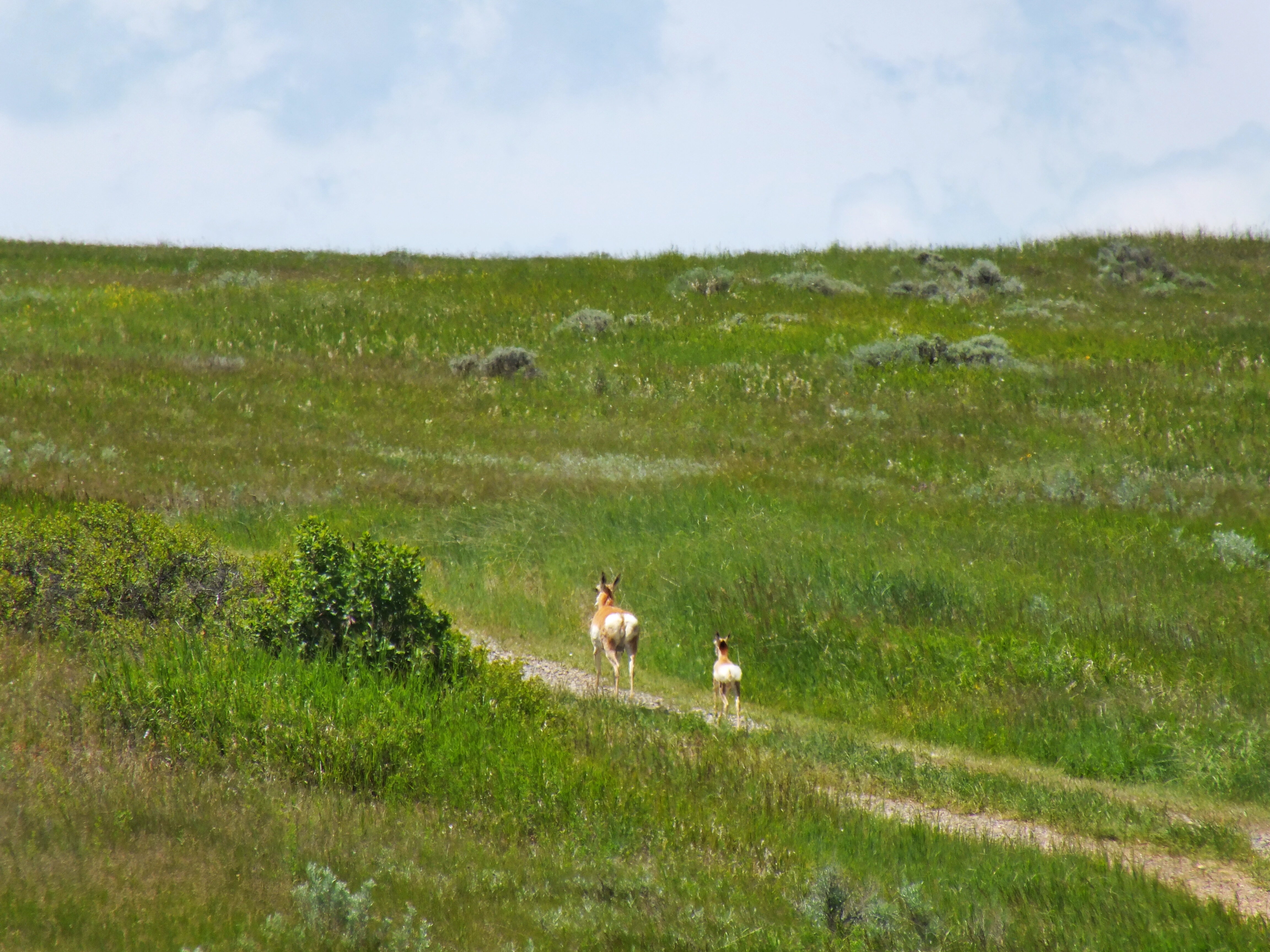 At the top of the hill in the above photo, there was a place to pull over. I parked and walked a trail across the hills. I spotted the Pronghorn calf poking its head up above the grass about 40 yards away.

I walked a couple hundred yards further and heard an odd huffing sound I didn’t recognize. It was the female. She was maybe 80 yards away, staring at me. Every minute or so, she’d make the noise. After a little while she ran up the ridge and disappeared. I’m guessing she was trying to attract my attention away from her calf which was hiding nearby. I didn’t see either of them again. 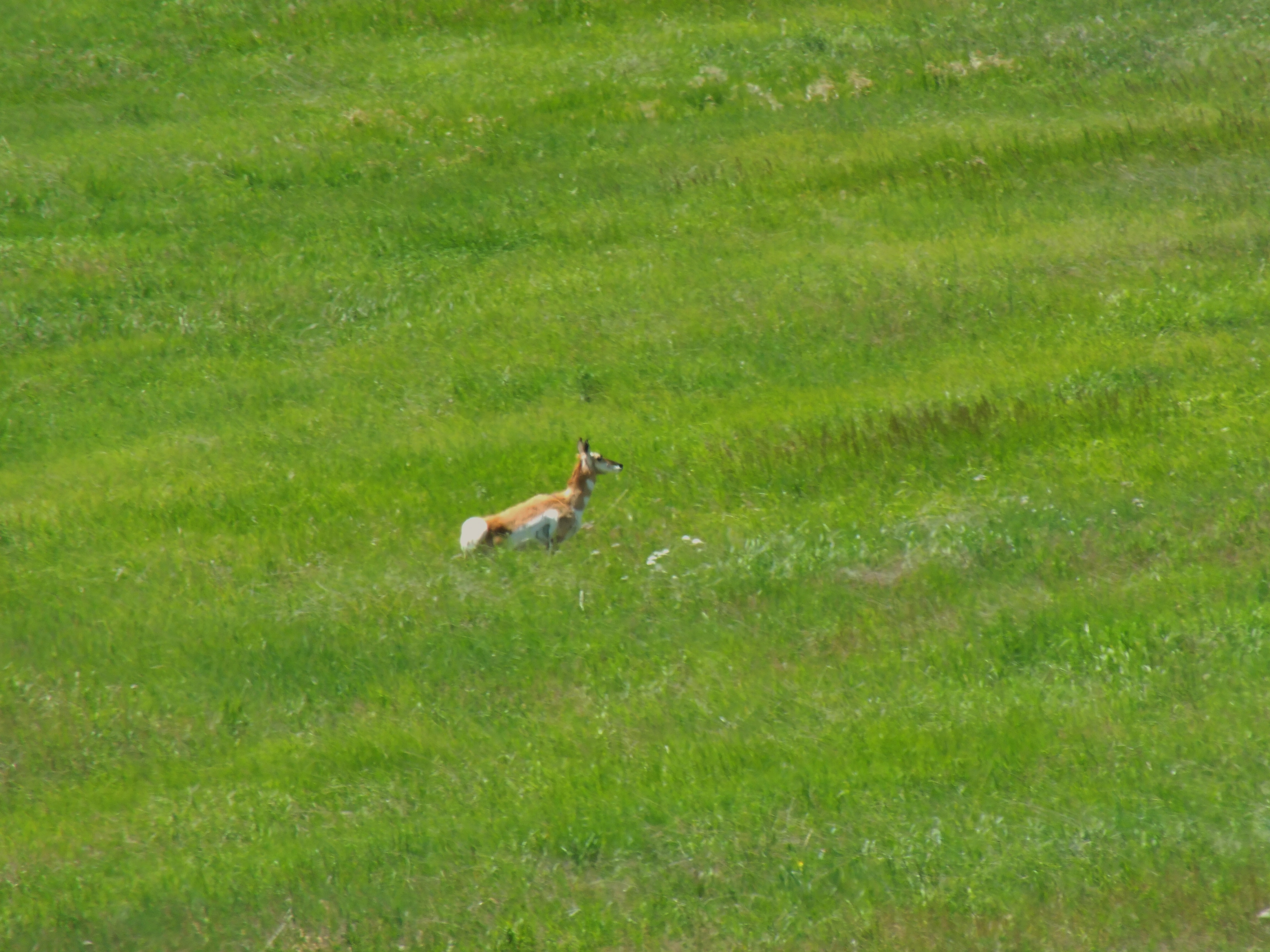 I walked with care up a grass-covered trail in an area where rattlesnakes are common. I was 40 miles from Sheridan, Wyoming, the nearest place where I was likely to find a hospital. I probably strolled a mile up toward Crook’s Hill, where the general had his headquarters on the day of the battle. There were very few birds, and no battle markers. But it was a beautiful day and the surrounding country was also beautiful. I enjoyed myself tremendously. 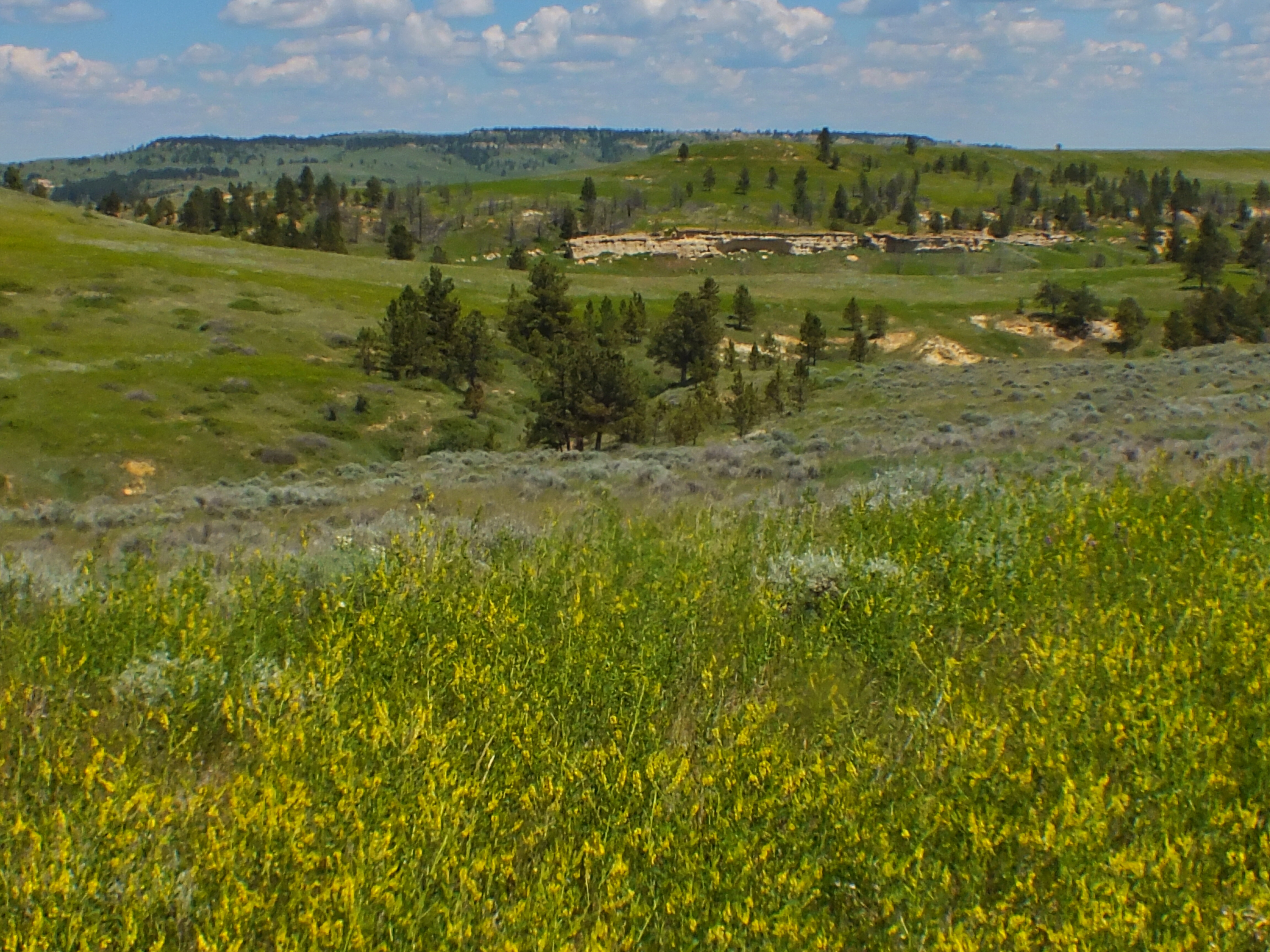 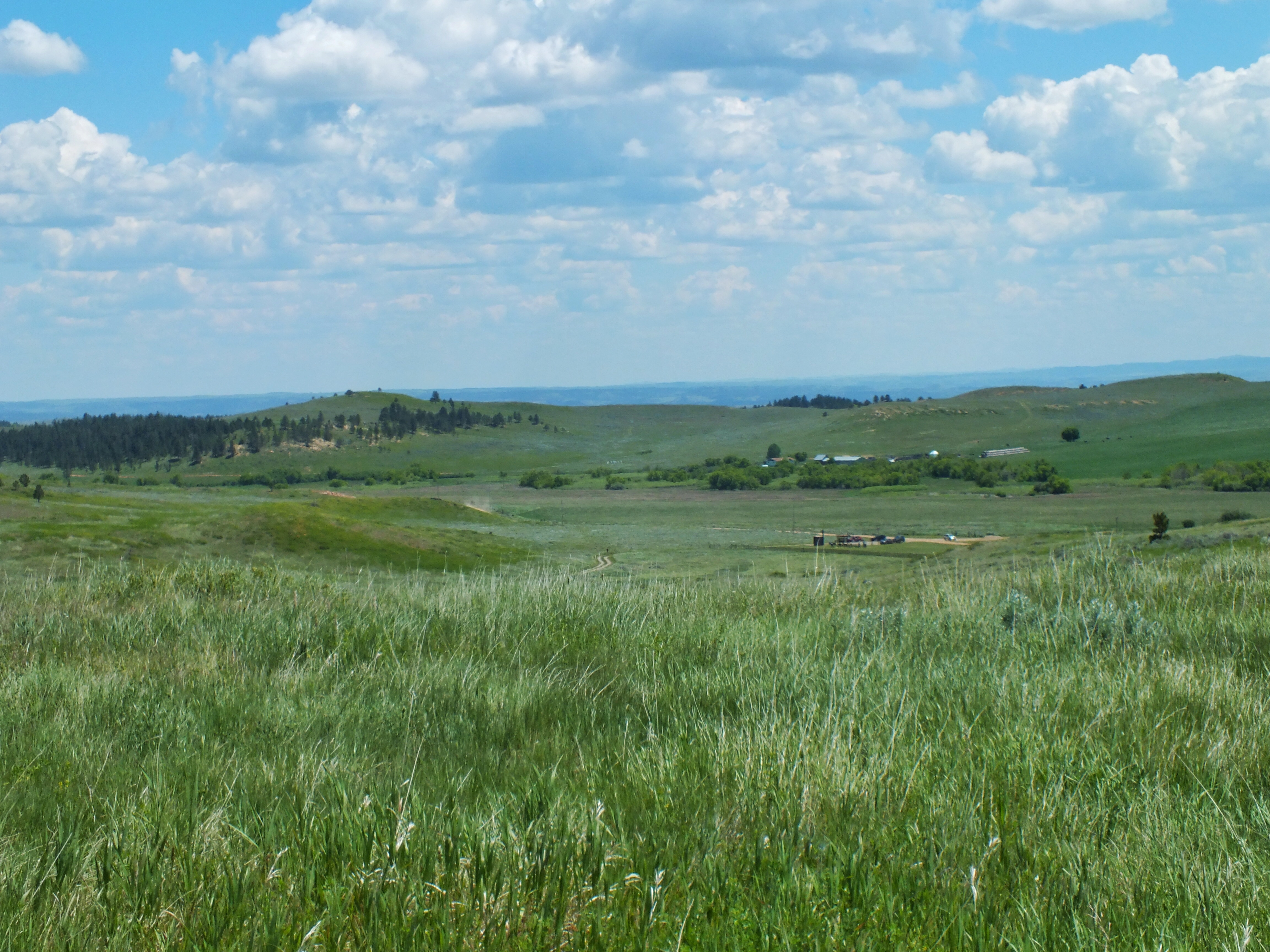 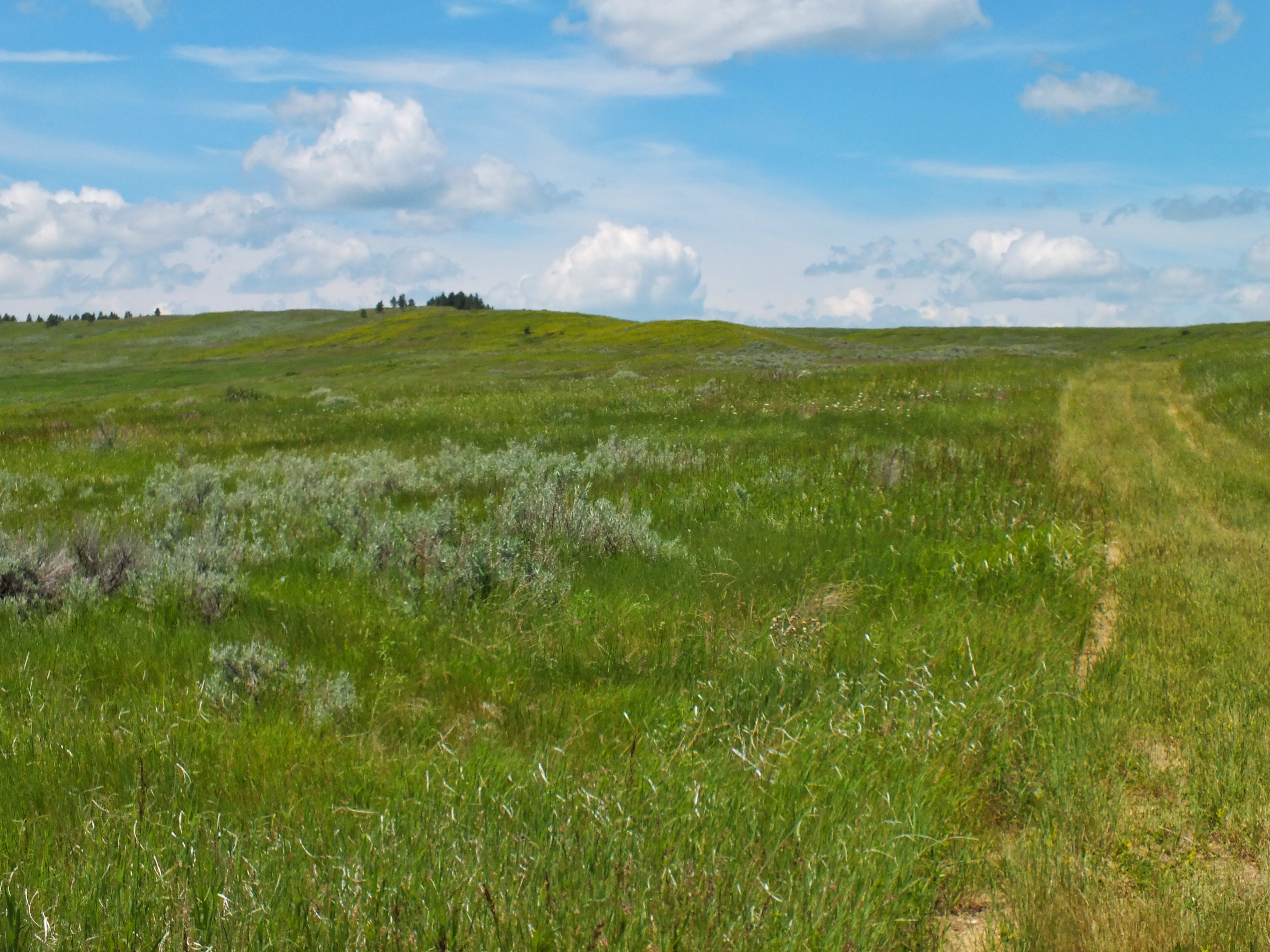 I didn’t go all the way to the top of Crook’s Hill. The trees on the hill may look close in the photo above, but the crest was deceptively far away. I took the video below from the place where I turned around. It was the heat of the day. There wasn’t really anything different I could see by going further—just more of the same scenery. I had gotten up early and had a long drive ahead of me. I would have definitely kept going if the reward had been worth the effort. But I suppose a contributing factor in my decision was that I’m not used to be quite this alone. I was a mile or so from my car, which was a mile or so from the park entrance, which was three miles from the nearest paved road, which was 40 miles from the nearest town, which was 480 miles from the nearest person I knew.

I drove the rest of the tour route without stopping or getting out of my car. By the entrance, I spotted a marmot on a rock outcropping. I was surprised to see one at this low an elevation. 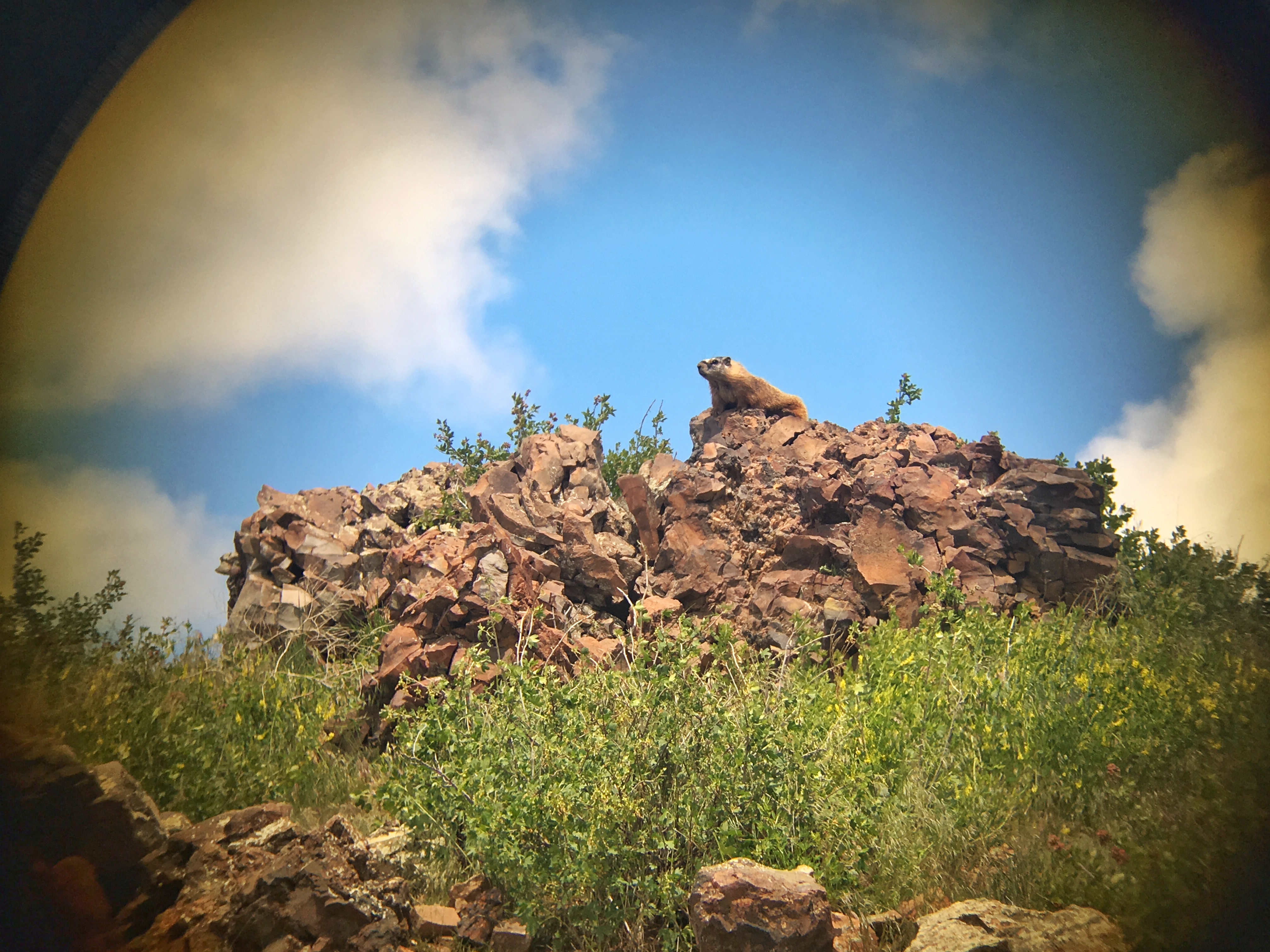